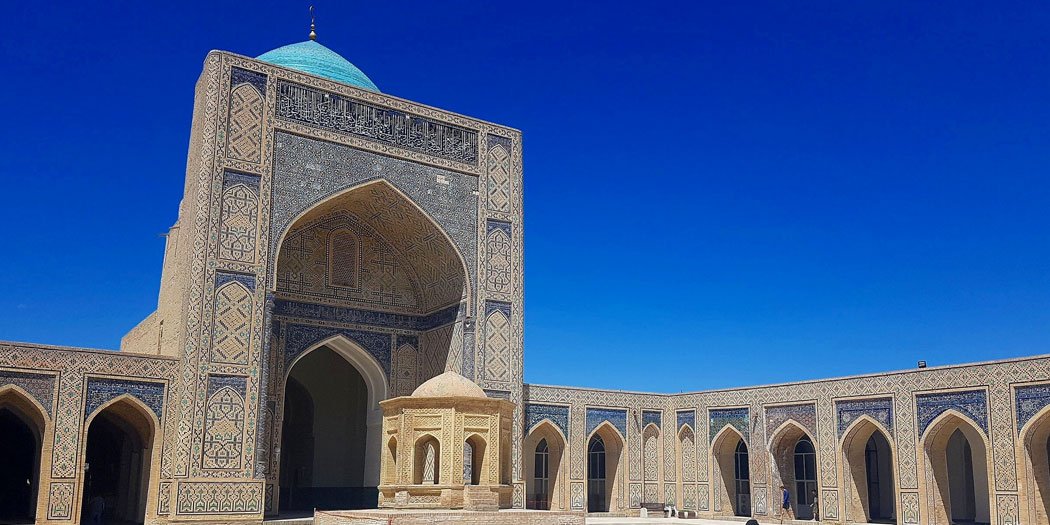 Country #108. Uzbekistan is one of the most underrated travel destinations in the world. It has beautiful desert scenery, an abundance of historical artefacts, and sits at the crossroads of the East and the West. With over 30 million people, it’s the largest country in Central Asia. We didn’t understand how such an interesting country had so few visitors. Perhaps part of its problem is its image: it doesn’t really have one back in the West. In a way, at least people know what Kazakhstan is, mainly due to the factually inaccurate (and brilliant) TV character Borat. More on this later. But if I were to approach the nearest person in London and ask them to tell me about Uzbekistan, they would a) probably think I was immensely strange for approaching them with such a specific question, or b) not have anything too substantive to say about the country. 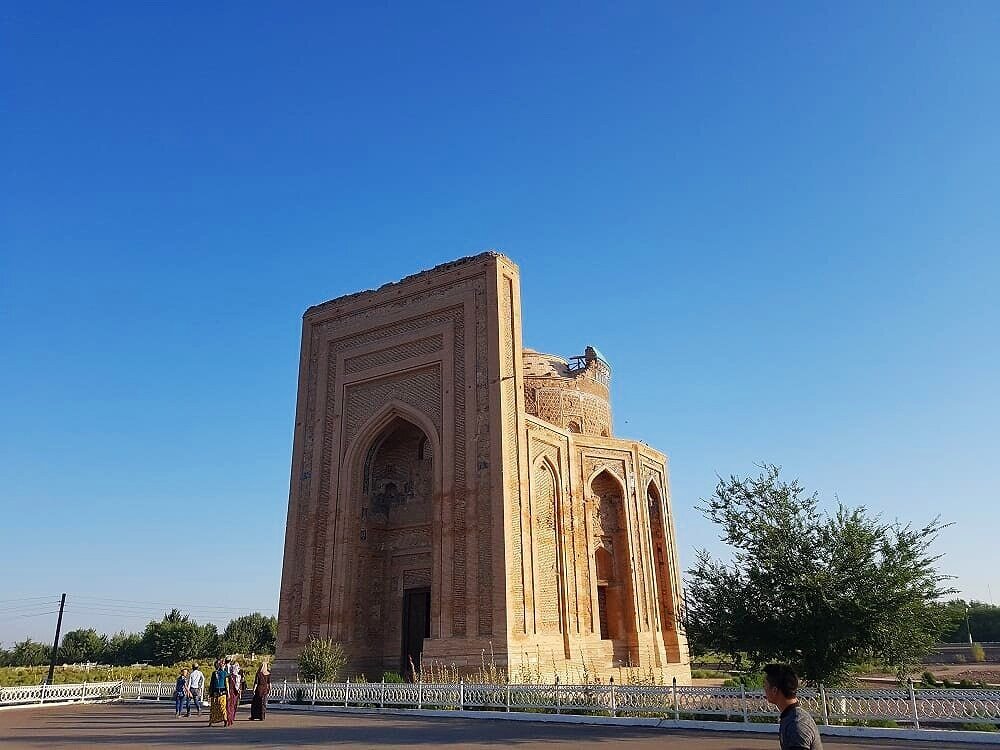 The crumbling relics of the old Silk Road trading route, in Uzbekistan. 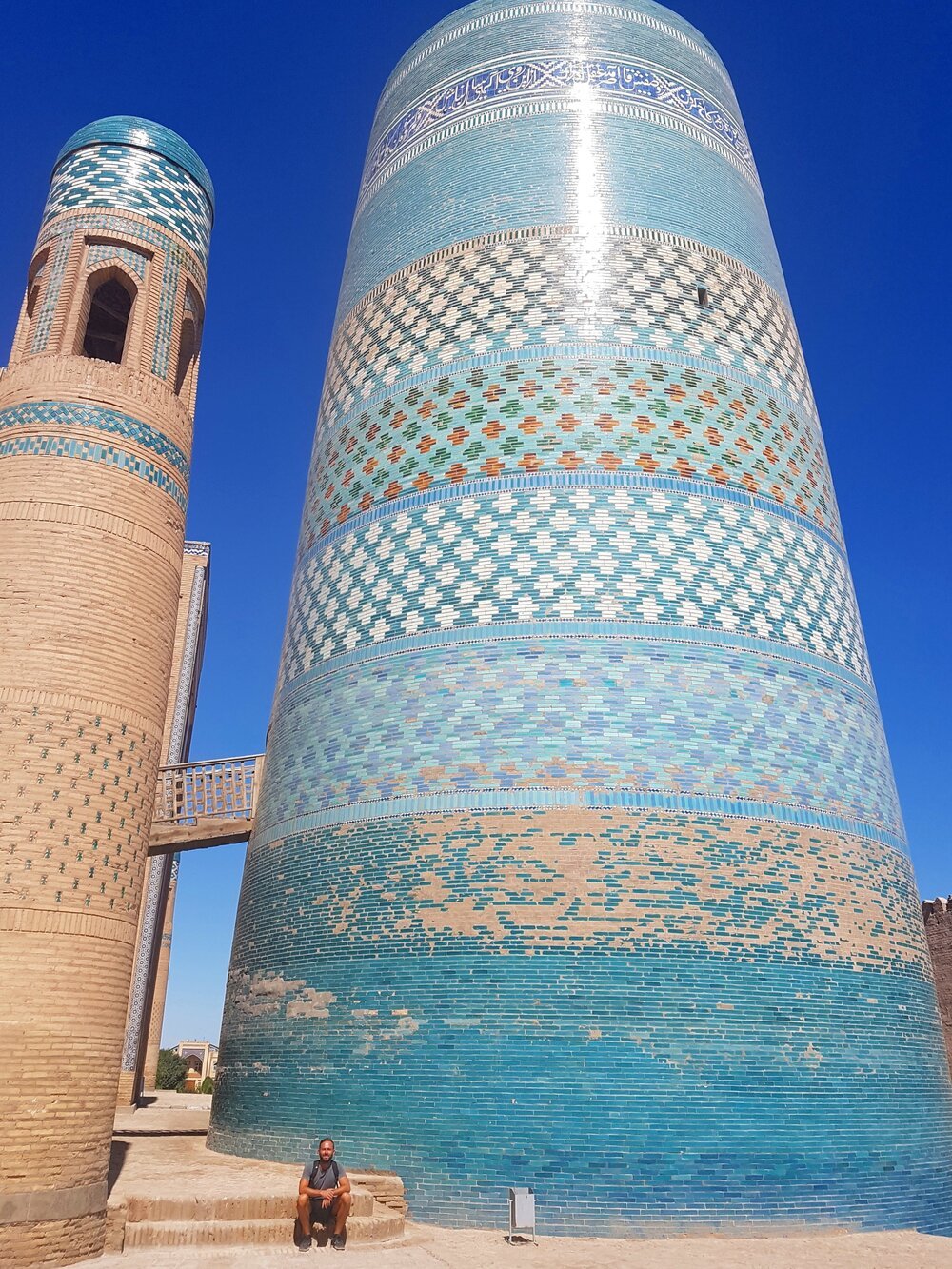 I’ll do my best to step in and give you a little flavour of what Uzbekistan is like. But what I simply won’t do is give you a flavour of its food, which is mostly unidentified meat kebabs that are very effective in loosening your bowels. Most of us were ill for the best part of the ten days we spent in the country, a common affliction for almost anyone who has travelled in Uzbekistan. Apparently the sunflower oil used in most dishes takes a while to get used to. And for most tourists, a week or so is not enough.

Uzbekistan sits at the centre of the old ‘Silk Road’ trading route, which spanned from China to Europe over a thousand years ago. As a result, the country is an enchanting mix of ancient Mongol, Islamic, and Soviet cultures. This culture clash also means Uzbekistan is dotted with some absolutely stunning old architecture. The old town of Khiva, is one of the best preserved historical towns I have ever visited. Similarly, some of the mosques in the old capital Samarkand are impressive both in their scale and the beauty of their colourful tilework. 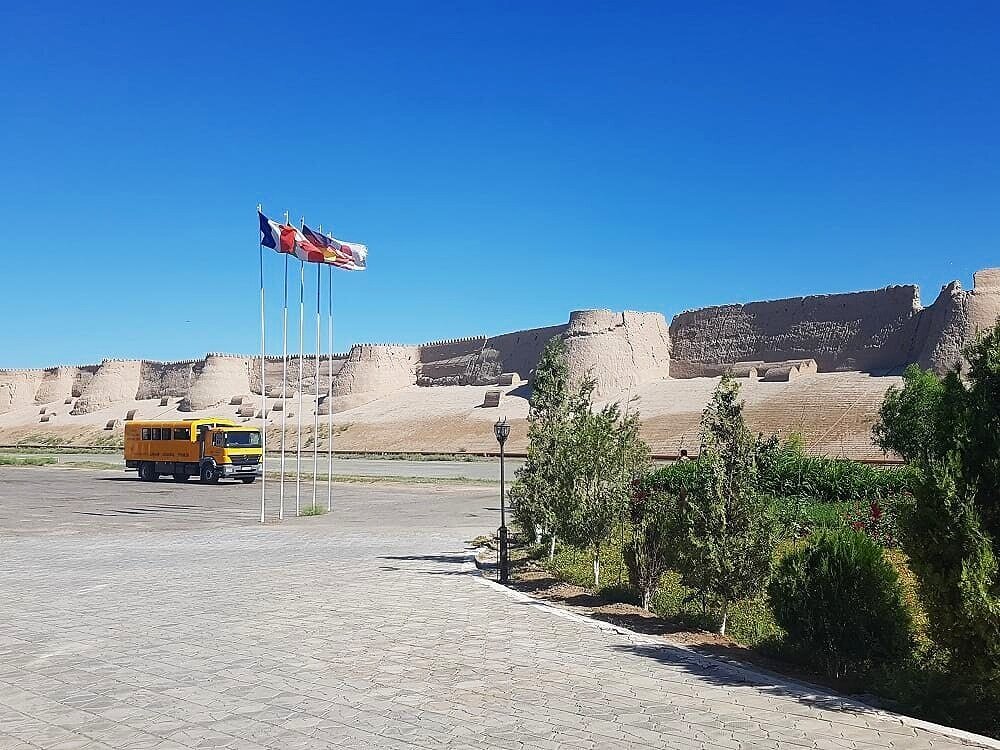 The Oasis Overland truck, outside the walls of Khiva, Uzbekistan. 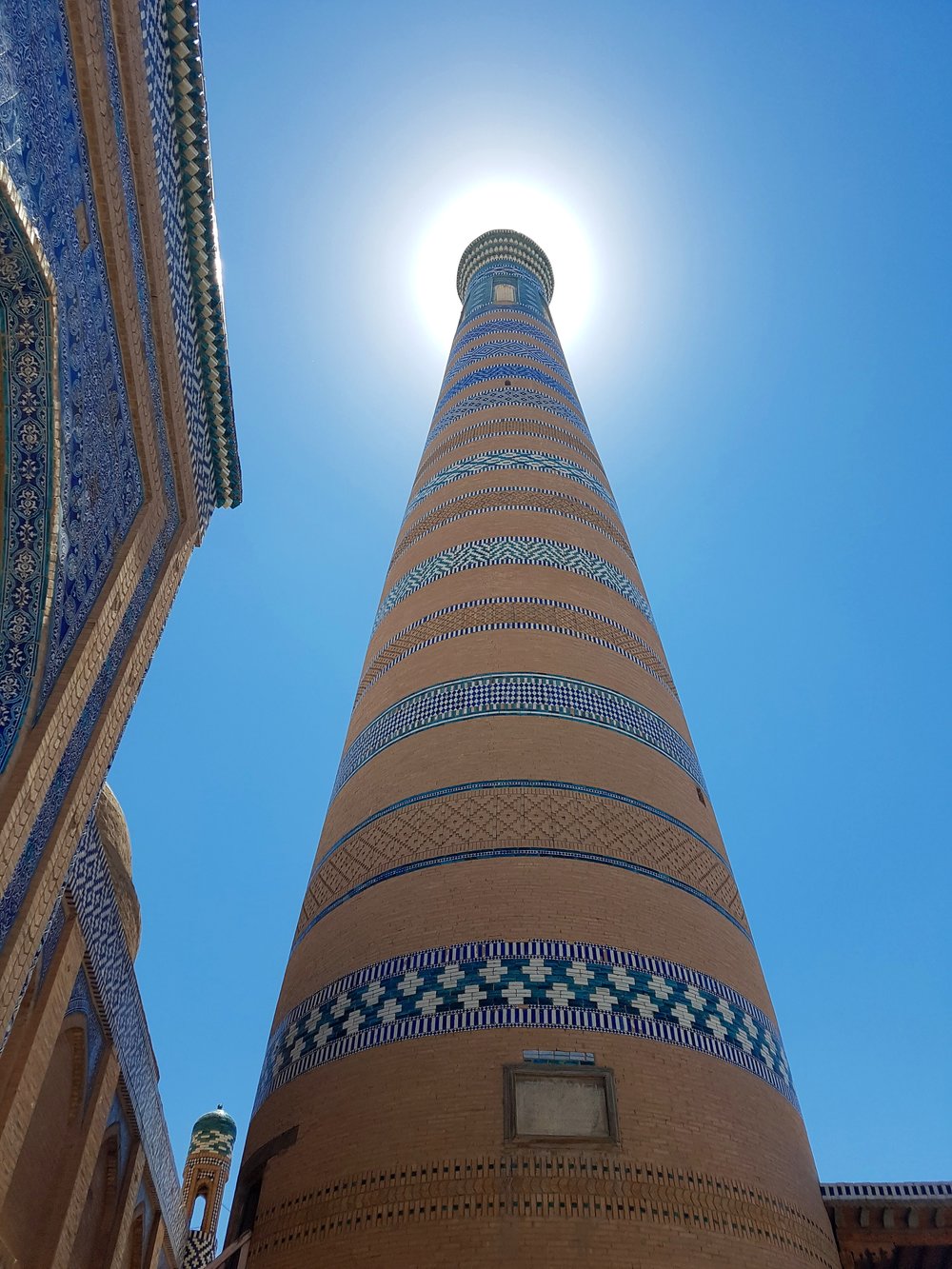 “What a brilliant photo,” you just thought. And you would be right. Old Town in Khiva.

You’re Never Too Far From The USSR

It’s important to note, however, that as with many ex-Soviet countries, the USSR did its best to destroy Uzbekistan’s history. Tashkent, the country’s capital, feels more Russian than Central Asian. Both due to its large ethnically Russian population (around 70%) and the endless rows of Soviet blocs which tower over functional streetscapes. Fortunately for me, I quite like crumbling concrete brutalist structures. To look at in a voyeuristic sense, not to live in ideally, I hasten to add. Any trip to Tashkent is not complete without going on a tour around its abandoned Soviet structures, as well as the city’s opulent Muscovite-style metro.

The Aral Sea (Not A Sea)

One of the Soviets’ most impressive feats was to drain the fourth largest inland sea in the world in just over 50 years. To grow cotton and to irrigate its land, they managed to turn the Aral Sea into one of the world’s largest dustbowls. Luckily for us, this meant getting atmospheric photos with marooned ships in the middle of the desert. 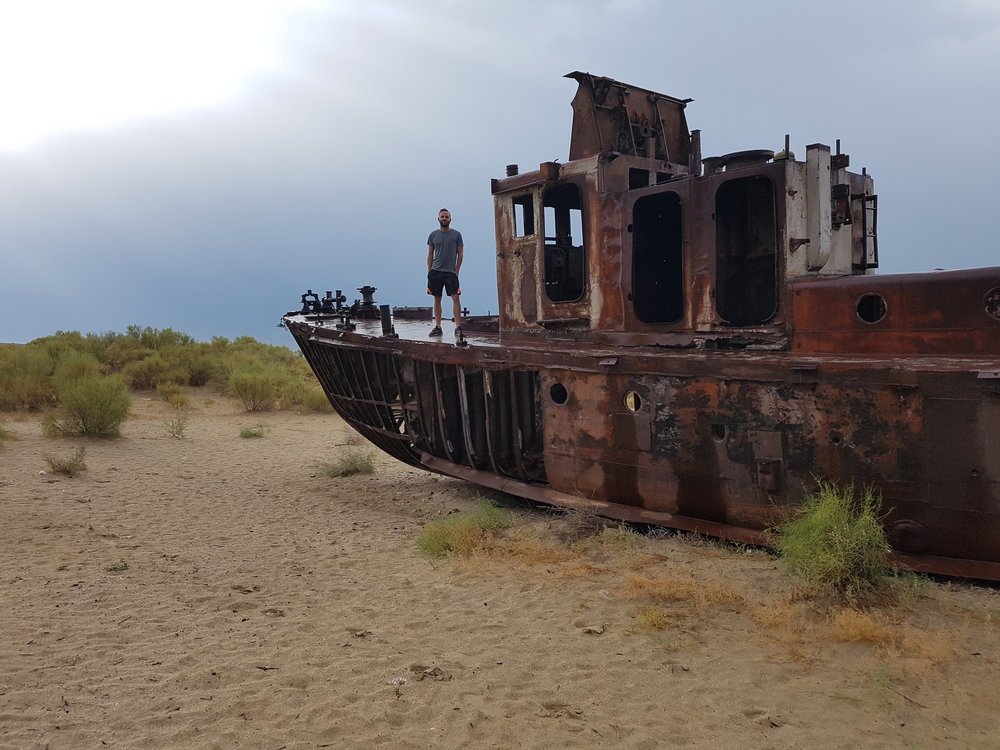 Is the depletion of an entire sea and degradation of the surrounding environment worth it, if only for a cool Instagram picture? Judging by this picture, possibly.

Unluckily for everyone living in local ‘fishing villages’ (now 100km from the sea), this means no jobs and extreme health issues ad infinitum. The drained sea was also polluted, which has contaminated the seabed and the surrounding area. It was only after camping on the contaminated dustbowl that we found this out via the Lonely Planet and even more trips to the toilet (which also probably reflected the kebabs we kept choosing to eat). 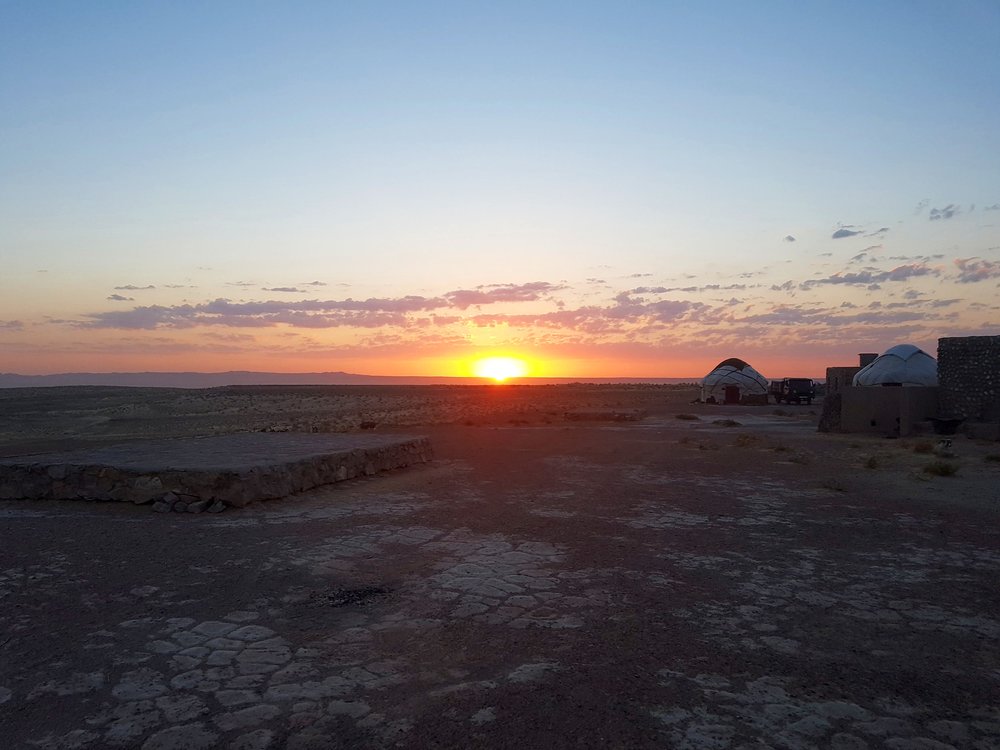 An almost extra-terrestrial landscape with the sun setting, in Uzbekistan.

The Uzbek people were all very friendly. A man in one market could not have been nicer. He kept shaking our hands, and telling us “we were very welcome in his country”. He really was at pains to tell us how happy he was that we had decided to visit. This did eventually become a problem. He followed us back to our overlanding bus, and would not stop telling us how welcome we were, to the point where he was chasing us and bellowing it through the window as we drove off into the distance. We encountered friendliness wherever we went, and on the whole concluded that this was a nice change from the regimented regime back in Turkmenistan. 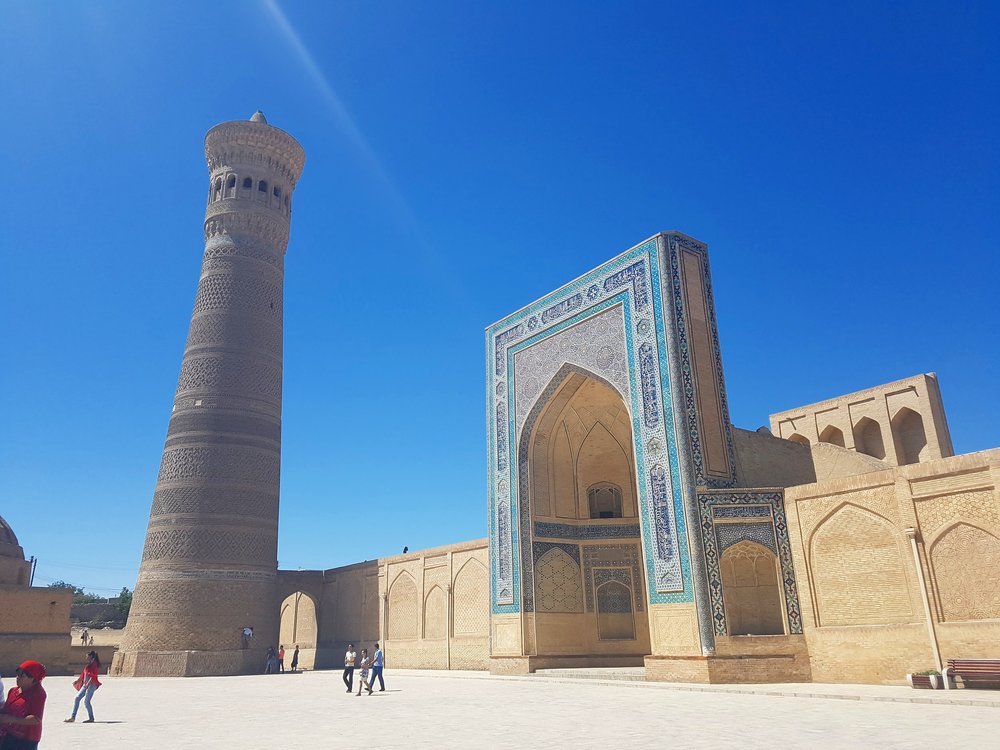 Fashion here is also intriguing. Monobrows, gold teeth, and slogan t-shirts are in vogue. I can’t help but think some of these t-shirts failed to sell well elsewhere globally. “Eat, Sleep, Go Online” was one of my favourites. “Live life like it’s happening” at first seemed meaningless, before sending me into a momentary existential meltdown. 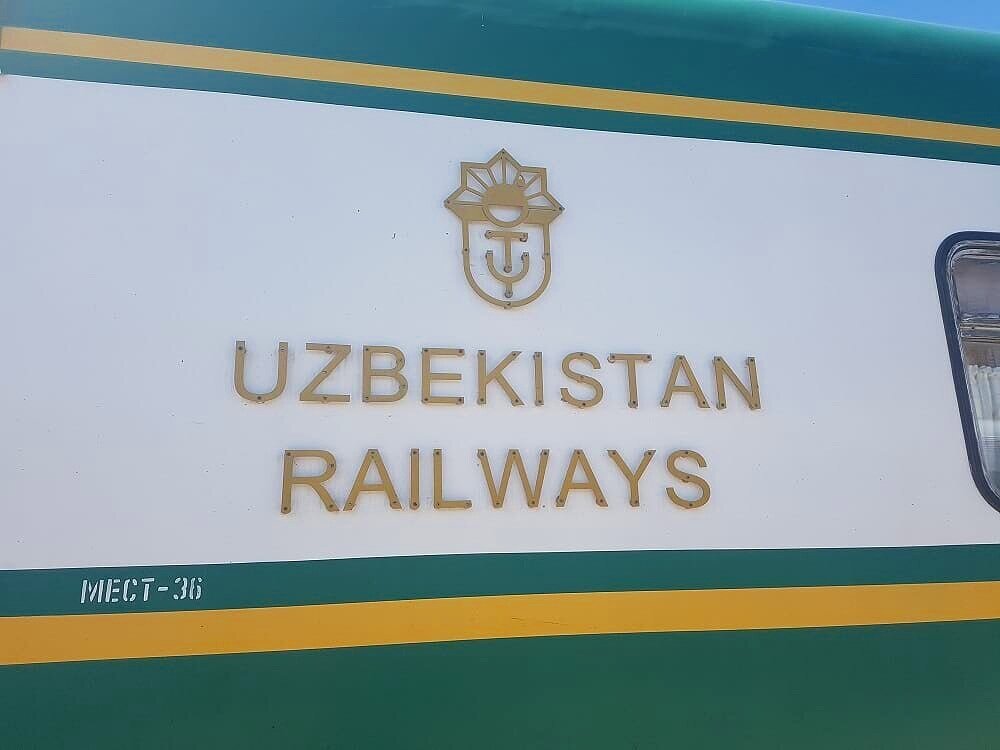 Travelling in style in Uzbekistan. 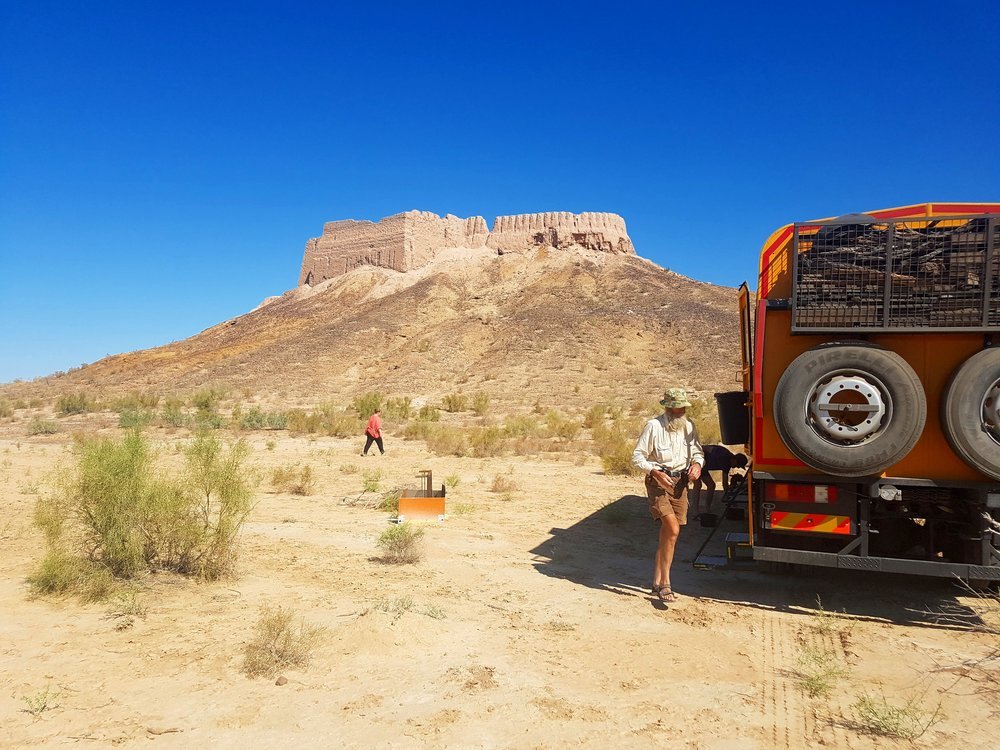 Steve, our driver. Steve has been on the road for years. I assume this is what I will look like in a few short years.

There is also quite a large emphasis on having a ‘sharp’ haircut here. Jamie, Alex, and I from the Oasis Overland bus soon learnt this. A young man – of around 12 – cut our hair, and the results were mixed. He spoke no English, but kept repeating the name “Cristiano Ronaldo”. “Either he thinks I look like Cristiano Ronaldo, or likes Cristiano Ronaldo,” I thought. Both of these interpretations seemed positive. So I nodded enthusiastically. He picked up his razor, and abruptly proceeded to shave the left side of my hair off, adding a deep parting line, as quick as a flash. I ended up looking like a cast member of Geordie Shore. In truth, I think I knew what was happening. Better to have an excuse to have a rubbish haircut than admitting you wanted it. 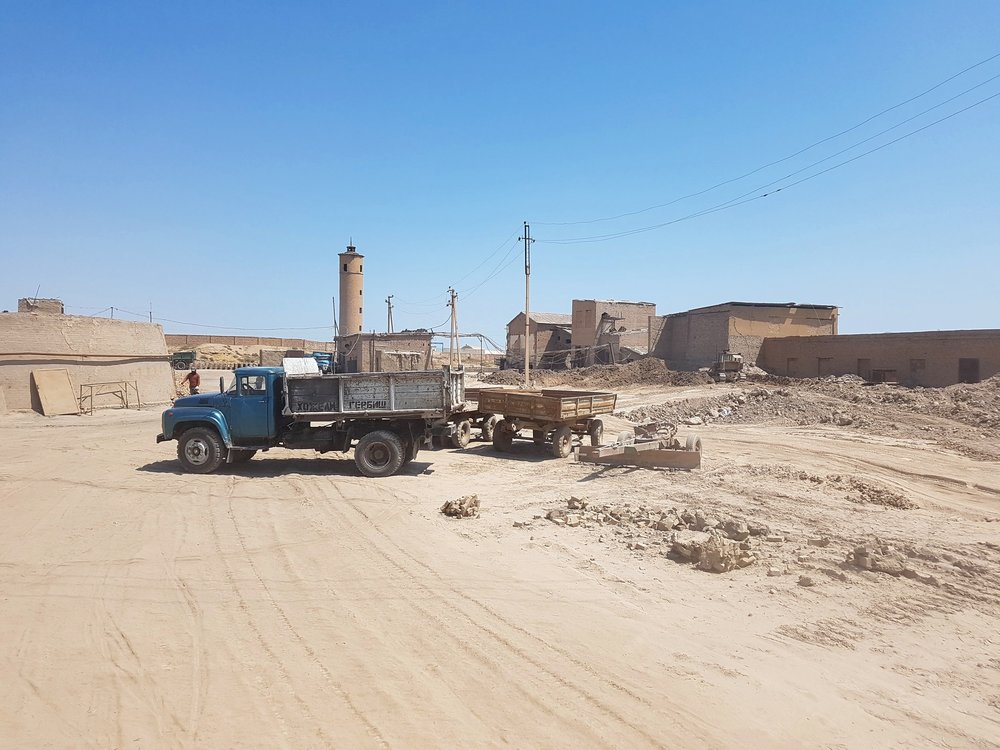 I hope you like sand. Uzbekistan is very dry country.

On the whole, I loved Uzbekistan. Sleeping in yurts, gazing at the Milky Way in the desert, exploring immaculate giant mosques, and eating terrible unidentified meat kebabs will remain some of my fondest memories. Hopefully, more and more people will visit as the country opens up and becomes a more common place to travel. This looks more likely under its new leader. The reformist Shavkat Mirziyoyev took power in 2016, replacing former leader Islam Karimov upon his death. Karimov had ruled since 1989, and never quite moved on from the country’s Soviet past. 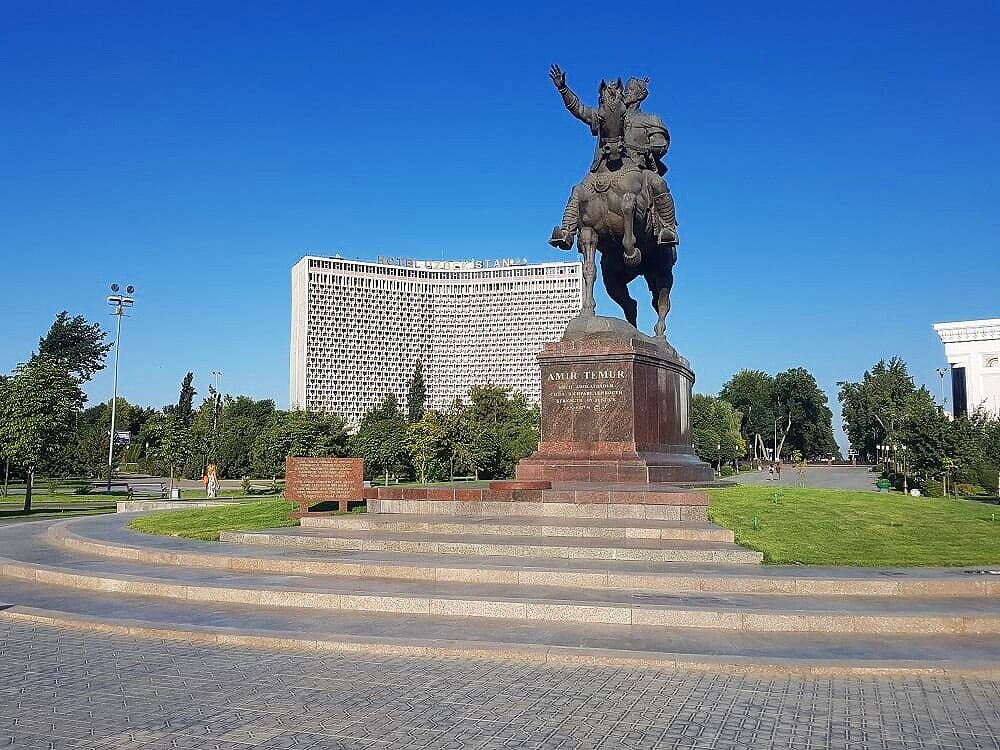 The iconic Hotel Uzbekistan, in Tashkent, with the Skver Im Amira Temura monument in the foreground.

On top of this, economic mismanagement, rapid hyperinflation, and a collapse in the country’s currency meant that a pint of beer cost only 20p. In my experience, this is one of the cheapest beers that can be found globally. What’s not to like, save for the disastrous economic consequences for most people living in the country. 20p though! 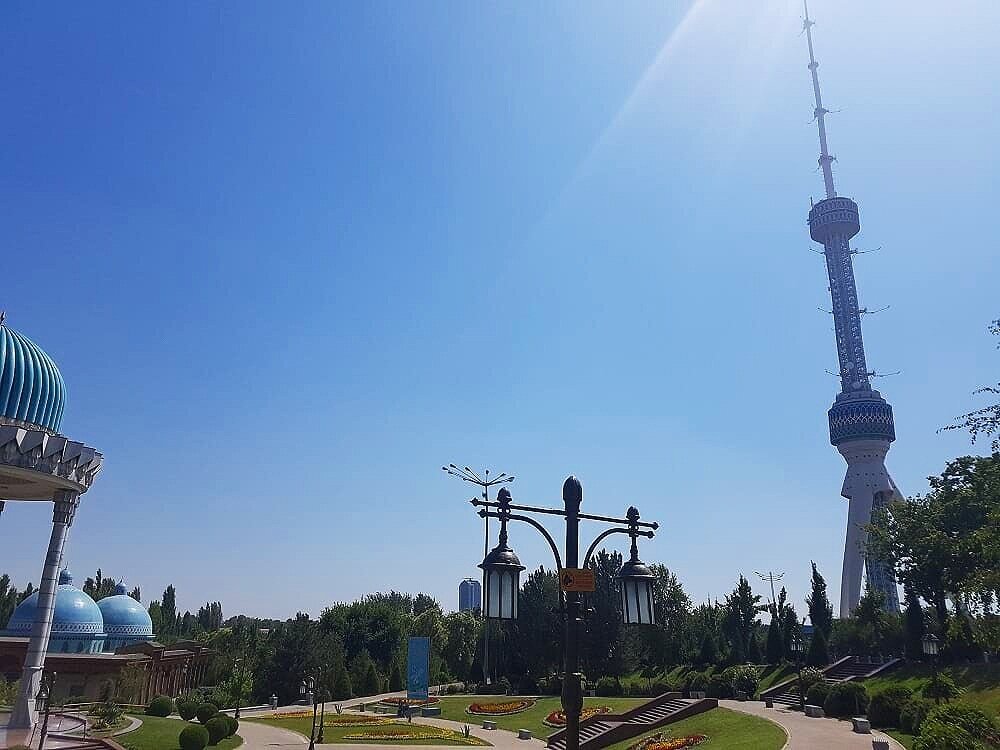 No major city in an ex-Soviet country is complete without its own TV tower, and Tashkent is no different.

Previous Post: Turkmenistan – My Personality Cult Is Better Than Yours