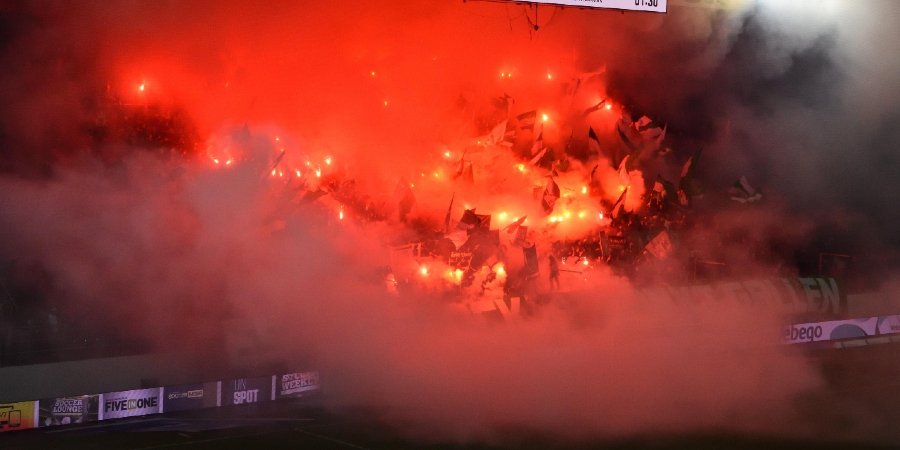 An Interview With Matt Walker – Author of Europe United

Over the summer of 2021 a group of strangers kicked some balls around. I’d never met these people. Nor will I ever meet them. Nor could I have any impact on what these men could do while on the pitch. On one fateful night, once again, a man missed a penalty for England. And I was yet again plunged into weeks of existential despair, as England lost the Euro 2020 Final to Italy.

The days after the match were genuinely tortuous. “Why”, I mentally reasoned, “was I allowing something over which I had no influence to have such a profound impact on my mood”? The days after the final loss felt like grief. And were probably processed as such by my nervous system. I dramatically vowed to stop watching football and to do yoga instead every time a game was on. I promised to “quit my addiction to football for good”. Obviously, this didn’t happen. Within weeks, I was back in the thrall of my addiction. And I’ve watched hundreds of hours more football since. And am now palpably excited for the upcoming 2022 World Cup. Which was definitely fairly awarded to Qatar, a dustbowl in the desert with a population of just a million, and loads of oil money. Fresh off the back of the 2018 World Cup, held in everyone’s favourite country, Russia. Another nation famous for tolerance, having loads of oil money, and starting land wars in Europe. On the current trajectory, I very much look forward to the World Cup being held in North Korea in the near future. Well done FIFA.

Nevertheless, as the excitement ramps up (at least for the football which will take place in Qatar), my inability to quit the sport got me thinking. Why the hell do I – and so many other people – love this game so much? Why do we let it control our lives and hijack our emotions? And is our collective football obsession verging on a patriotic or even cultish phenomenon? I’ve watched football matches all over the world. But I’d just read a fantastic book – Europe United – by Matt Walker. He seemed much better placed than me to answer some of these questions. So we sat down for a drink in London after watching our team Fulham play. We talked football and travel, both of which we suffer from significant addictions to. Here’s what Matt had to say. 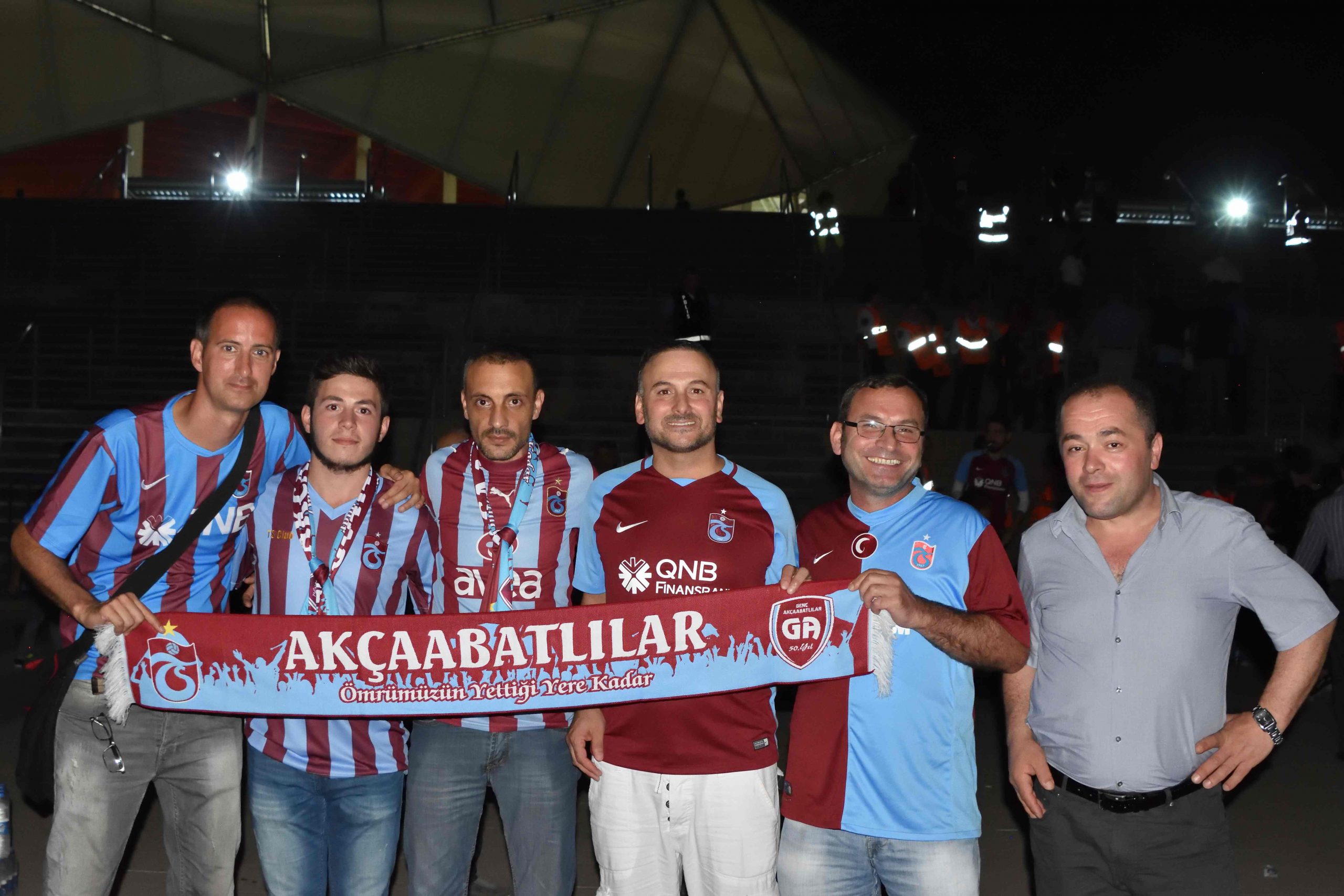 Matt on the far left, hanging out with some Trabzonspor fans in Turkey. Photo credit: Matt Walker

You watched 79 top division football matches in 55 European football countries in less than a year (amazing effort). What were the biggest lessons and takeaways from this experience?

Thanks Mike. It was great to experience, and then share through my book  ‘Europe United’.

It’s a bit of a cliché, but my football travels emphasised how friendly and helpful people are towards visitors. This was especially the case when watching football in offbeat places, such as Vitebsk in Belarus or Gjilan in Kosovo, which I preferred to visit over more mainstream cities and football clubs. I laughed when a Turk in Trabzon gave me directions to a nearby landmark where I could find someone else to ask for directions. I felt humbled when Eric, a Kazakh in the faded Silk Road city of Taraz, paid for my haircut, an enormous meat platter, and my 70p match ticket. Such hospitality even made the rare unfriendly occurrences – the German who refused to take my photograph in Mönchengladbach, the Olympiakos fan who confronted me in Corfu – stand out.

From a football perspective, I found football styles to be quite homogenised across Europe now, with 4-2-3-1 the most popular formation and plenty of possession-based passing out from the back. There were a few exceptions, with defensive football dominating in former Soviet states whilst teams in some of the lesser leagues in northern Europe still hit big diagonals to even bigger strikers. 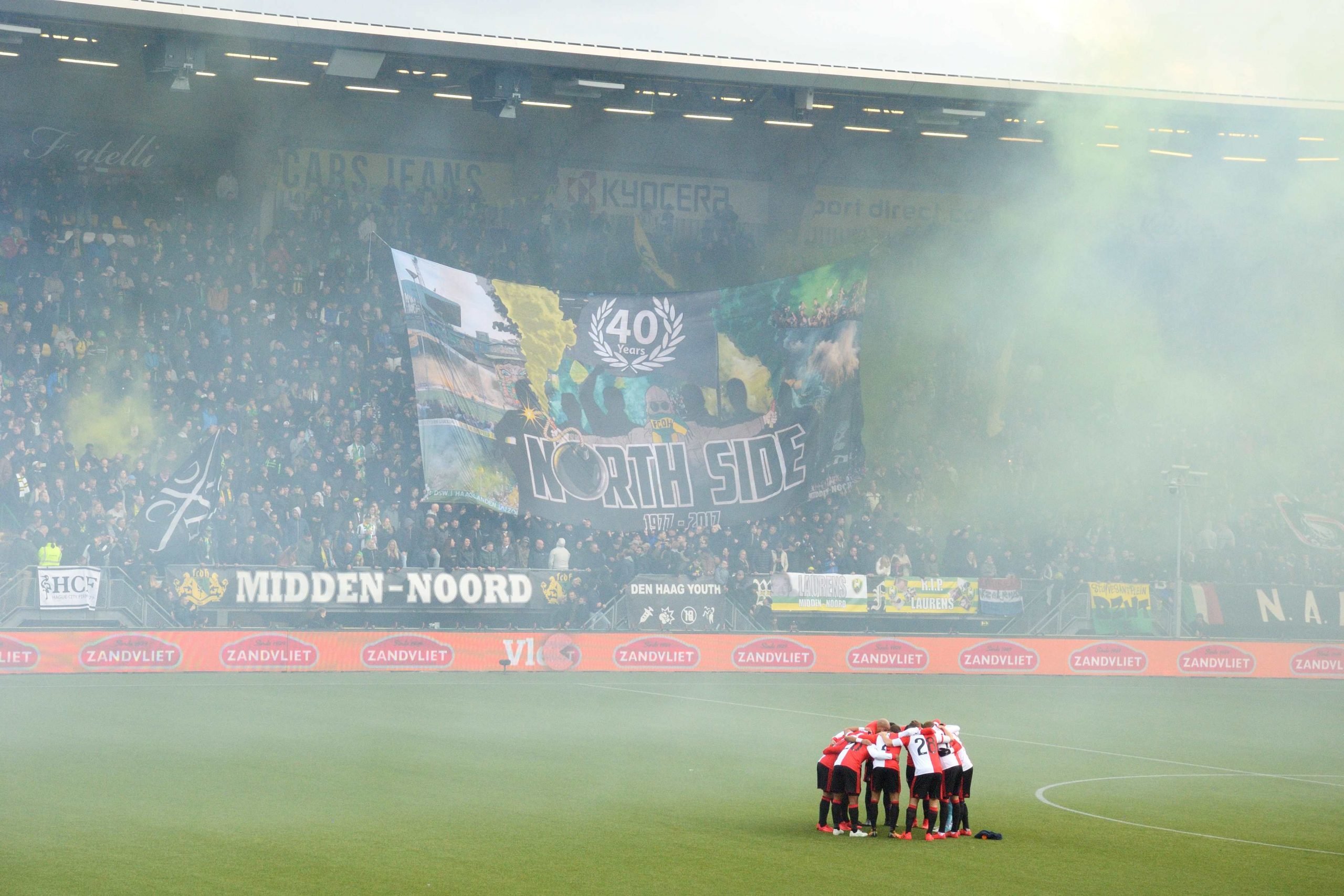 However, my travels were more about the experience of going to the game than the match itself, and this was incredibly diverse. Terrace food varied from delicious Maltese-style pizza and Finnish sausages to nothing at all in many stadiums. I could sip a beer pitchside in the Estonian sunshine, but only when not in sight of the game in England. Entrance costs varied from nothing in nations such as Armenia, Andorra, and the Faroe Islands, to £57 for a prime seat on the half-way line in Porto. And, of course, atmospheres ranged from the near silence of a dog, a cat, and 22 fans watching an 8-1 thriller in San Marino to noisy tens of thousands in Germany and Spain. Personally, and my trip and the pandemic has only reinforced this, I feel that people should follow their passions and dreams. If you have a slightly crazy idea, then go for it. You never know what it may lead to! 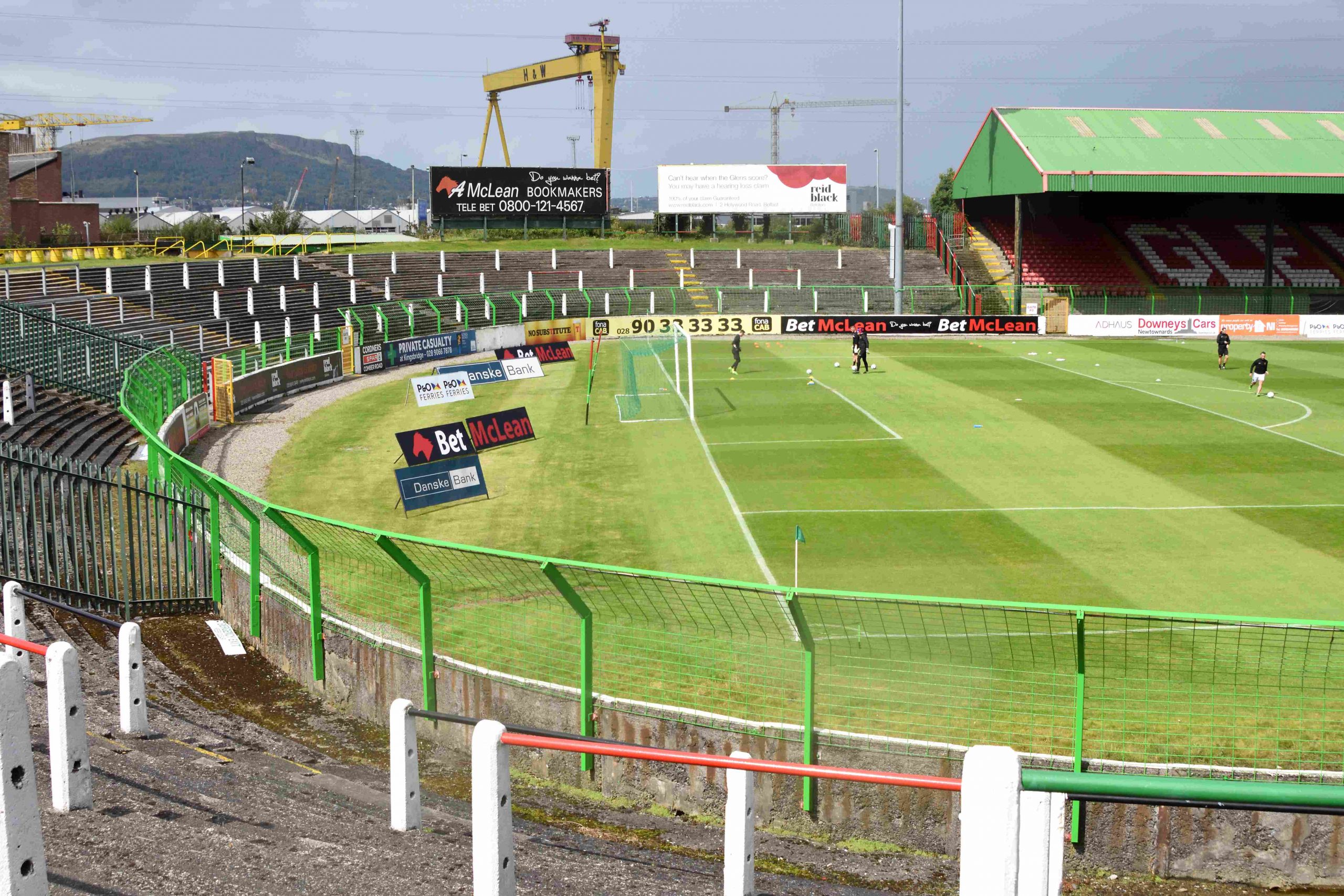 Some of the matches were less well supported than others. Here’s a pick from a match in Northern Ireland. Photo Credit: Matt Walker

From what you’ve seen, what drives people towards supporting clubs (filled with mainly foreign millionaires who they’ll never meet) as if their lives depended on it?

It’s not too controversial to conclude that it’s almost always men, not women, who are the most ardent of supporters. There were a pleasing number of families and women attending matches in a few Nordic countries, but it’s virtually all men in the hardcore sections, sometimes not a woman to be seen in Eastern European crowds, and that generates a certain atmosphere. For many fans, their football club is escapism from the routine of their normal lives (and wives!). It’s also an important sense of community as men can find it harder to retain friendships as they age. Football is also fantastic unscripted entertainment. Fans don’t know what will happen on the pitch, or what their emotions will be at the end of a game, and that risk towards extreme feelings is perhaps more appealing to men.

There is also the sense of tradition. The longest serving fans, and this is probably true more outside my home city of London, have often lived near their club since childhood. A Bulgarian fan explained that he supported misfiring local side Lokomotiv Plovdiv because “love and heart makes me come to the stadium”. Then there was Vlad, a Moldovan who, when asked who was the player to watch for Chișinău’s faded powerhouse Zimbru, shook his head resignedly and responded “it’s difficult to say”. I’m the same. I’ll always be at Craven Cottage, watching whoever plays in the famous white shirt of Fulham. It’s a place I’ve been to more than almost any other. It’s my church. 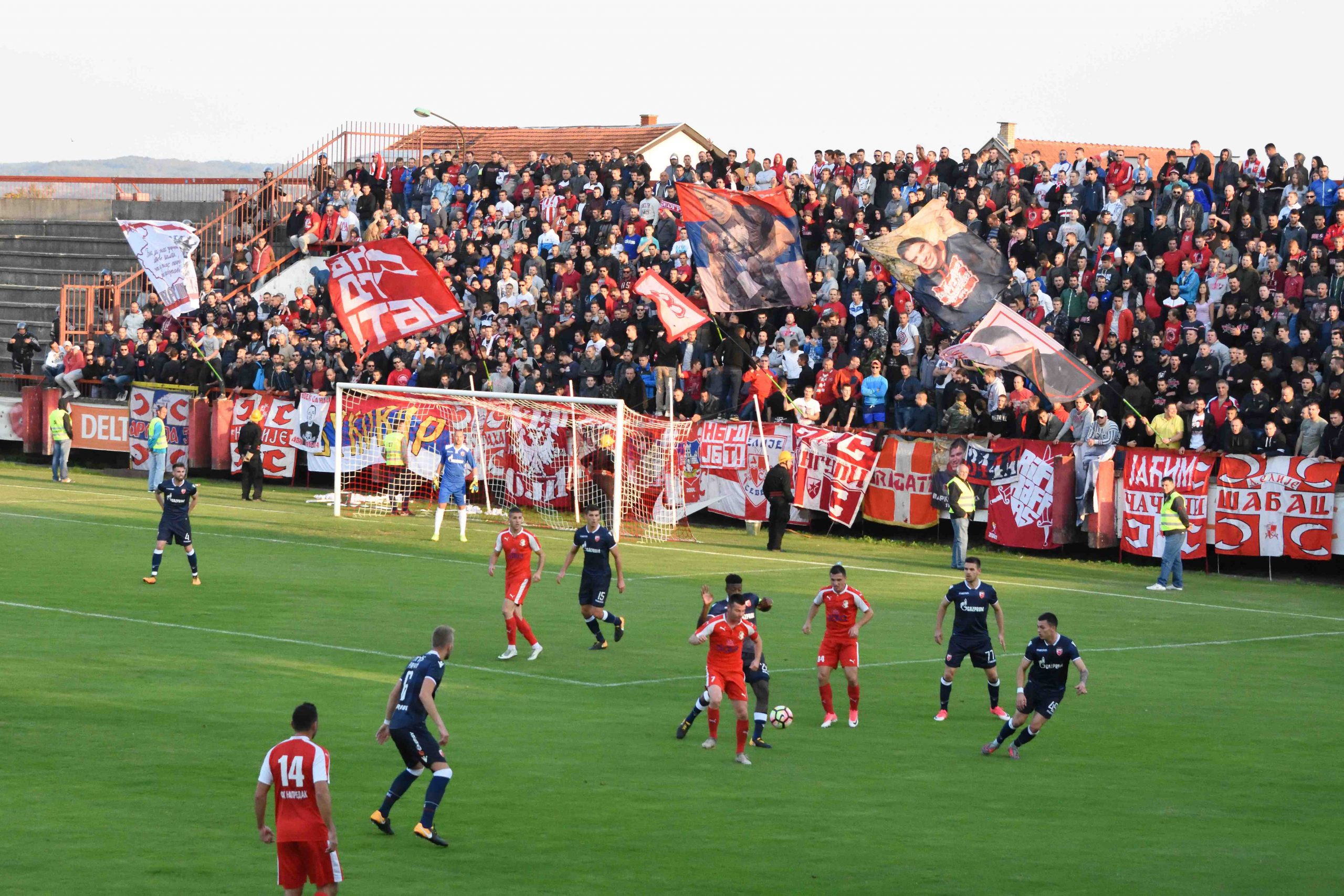 Serbian fans getting in on the act. Photo credit: Matt Walker.

Do you think it’s reasonable to view football fandom as a sort of patriotism, given how strongly people can feel about ‘their clubs’?

The different levels of fandom are what makes football the world’s greatest sport. I experienced the club game on my epic European tour, but some people just follow the big international tournaments whilst ‘groundhoppers’ – who collect stadium visits – often prefer the variety of grounds, and matchday experiences, to the game. Other fans love tactical analysis, match statistics, hoarding memorabilia, or just prefer to play Fantasy League. It means that football is a universal language especially if, like me, your interests are a combination of all of the above.

I would say that the most passionate of club fans are following an ‘extreme collective hobby’ rather than a form of patriotism. Football clubs give people a local identity in an increasingly global society, particularly as the way we consume news, products, and other forms of entertainment has become so standardised. But your local club is your heritage – something that the instigators of the flawed European Super League didn’t try to understand – and that’s especially important in industrial areas that have been stripped of the industry that founded them in the first place.

In my view, your football club tells others more about your own identity than a favourite band or film. It is a touch counterintuitive to consider how something that is about being part of a collective shows how you are different from others. Being a football fan is like being part of a herd of zebra, each animal with their unique pattern of stripes.

Where have you seen the most passionate fans in Europe and what were they like?

My trip was a real contrast. It took me from desolate grounds to packed stadiums. I found the most passionate fans watching mid-ranking European leagues, such as Sweden, Denmark, Austria, and Switzerland, in more affluent countries where locals had yet to be priced out of attending top flight football.

My experiences at the far-flung Black Sea city of Trabzon were the most intense. Trabzonspor, one of only two non-Istanbul clubs to have won the Turkish Süper Lig, are passionately supported by almost the entire city, a contrast to other Anatolian cities. A group of young fans walk to the stadium from the main square before every match, even though the new arena is considerably further away than the city centre original. 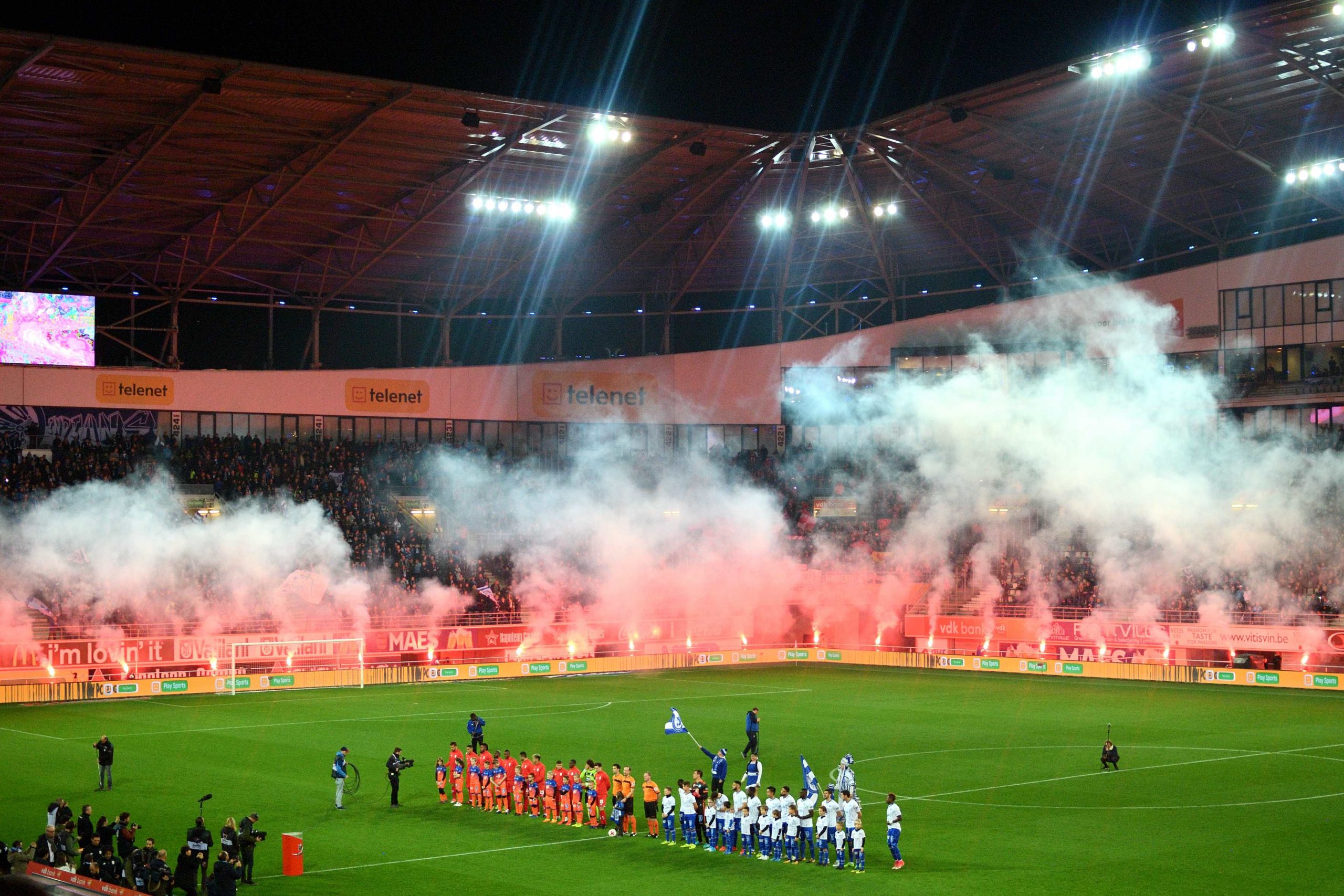 I watched from the cheap seats behind the goal, and it was a swirling circle of noise, cigarettes, and collective support, all fuelled by caffeine from copious amounts of Turkish tea. A fan next to me said that he normally watched the match on television afterwards as he had no idea what was going on. German striker Timo Werner even had to wear ear plugs when playing away at Beşiktaş in 2017 such was the intense noise. And my experiences at Trabzonspor echoed that. The celebrations when they won the 2022 championship must have been incredible.

Sometimes the passion over spilled. Cracovia fans shot fireworks at the visiting Wisla support during the fiery Kraków derby known as ‘The Holy War’. The match was stopped. Cracovia lost 4-1 and their supporters were banned from away travel for the rest of the season. There is a limit. Football is important for lots of reasons, but it’s only a sport.