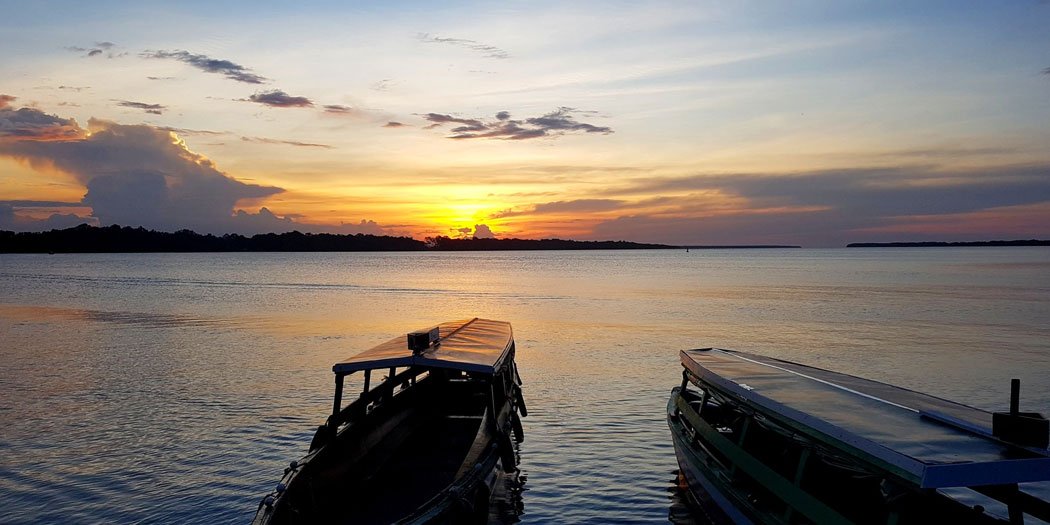 French Guiana – France, But Not As You Know It

The ‘Guianas’ are probably most famous for being those countries at the top of the map of South America you can’t name in pub quizzes. With my scratch map of the world beckoning, I set off for the tiny, rainforest-covered countries of French Guiana, Suriname, and Guyana. Having been back in the UK, sad about Brexit, I was glad to be leaving Europe and heading into the relative isolation these countries offered. Only I wasn’t. I rather oddly found myself on a domestic flight from Paris to Cayenne, the capital of French Guiana. On landing, and to my horror, I was greeted by French and EU flags. It was as if the flags were taunting me. Cars had French number plates. What sort of sick joke was this? 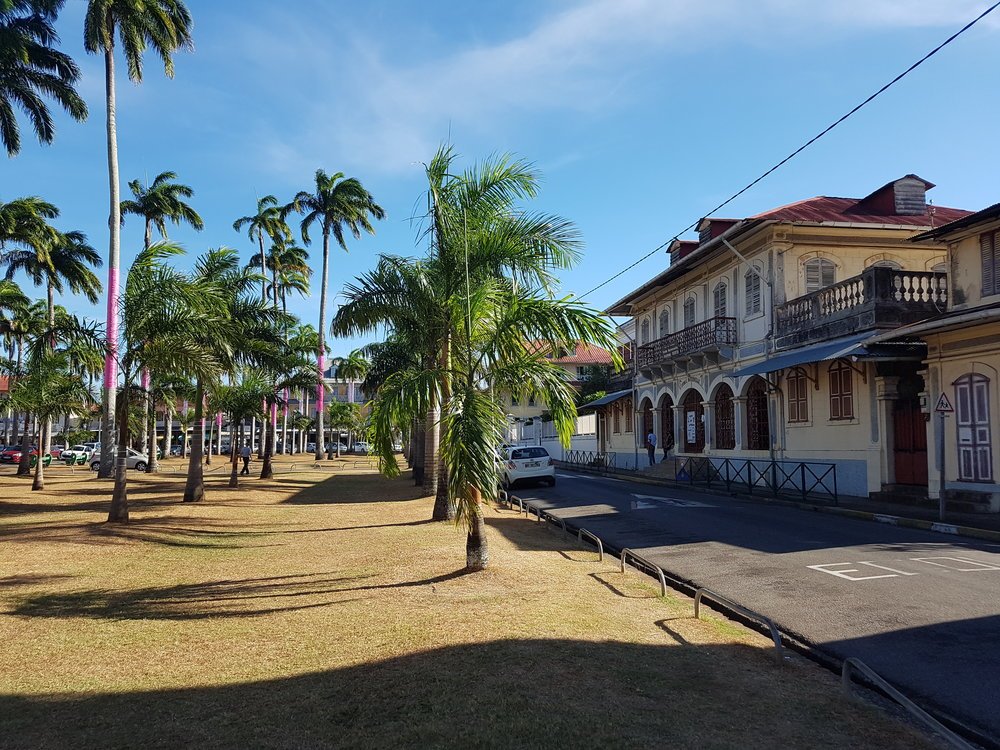 French Guiana is part of France, obviously. I was actually well aware of this before I left. It would have been a better story if I wasn’t though. Unfortunately for the story (not for me) I got addicted to online quiz website Sporcle in fresher’s year at university. I could rather pointlessly name all the countries in the world in less than 10 minutes. I was now reaping the benefits of the hours spent wasted on that site.

French Guiana is tiny. Only 250,000 people live here. Generally speaking, the people are very proud to be French. The Tricolore flag hangs from most houses. I found this strange. Despite some funding from the French central government, the difference in the level of development between Guiana and France is stark. Aside from some picturesque colonial buildings, the country does not seem ‘European’ in a developmental sense. 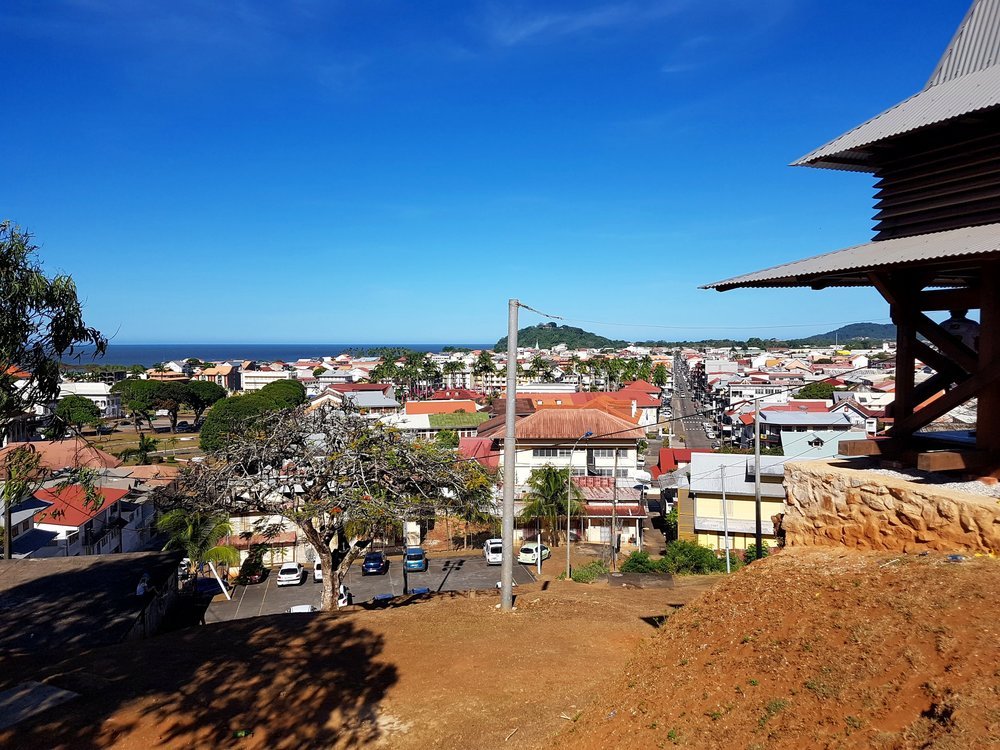 Perhaps Guiana’s biggest draw is the tenuously named ‘European Space Centre’. It’s the busiest spaceport (insane that we can even use this term outside sci-fi films) in the world. 75% of all ‘satellites’ are launched here. Europeans clearly decided that they didn’t want a huge, explosive, and dangerous missile launching pad blighting the landscape at home. So, they built the spaceport in pretty much the only place in Europe which isn’t actually in Europe. Well done! Also there is some technical reason about rockets needing to exit the atmosphere from specific angles close to the equator, but I’d already made my judgemental mind up so chose to ignore this fact. Guiana is also famous for the French penal colony Devil’s Island, immortalised in Henri Charriere’s 1969 book Papillon. While I haven’t read the book, mentioning it just there probably made you think I was an intellectual. Job done. 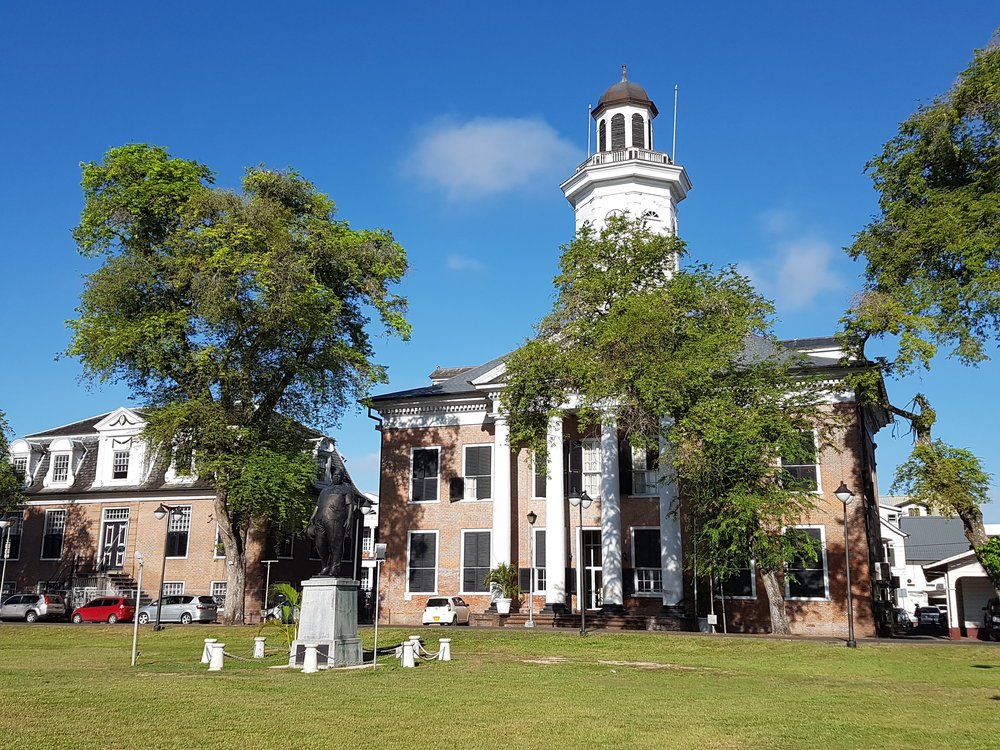 Country #83. Onto Suriname. If there was an award for being ‘pleasantly surprised’, decided by me, it would of course be fairly valueless. That said, the ‘Mike Richards Award for Being Pleasantly Surprised’ (sponsored by something badass, like cigarettes) goes to Suriname. Why? I ask myself rhetorically, to make the reader feel somehow involved (you aren’t). I really didn’t know too much about the country before I arrived. So as I sat on the plane to the capital, Paramaribo, I was excited. Then, extremely terrified. The plane’s engine cut out very suddenly. “I’m going to die!” I panicked. Then I realised it was just the plane beginning its descent. “Phew, I’m not going to die.” But then I began panicking again as I realised I was going to die eventually, just not today. 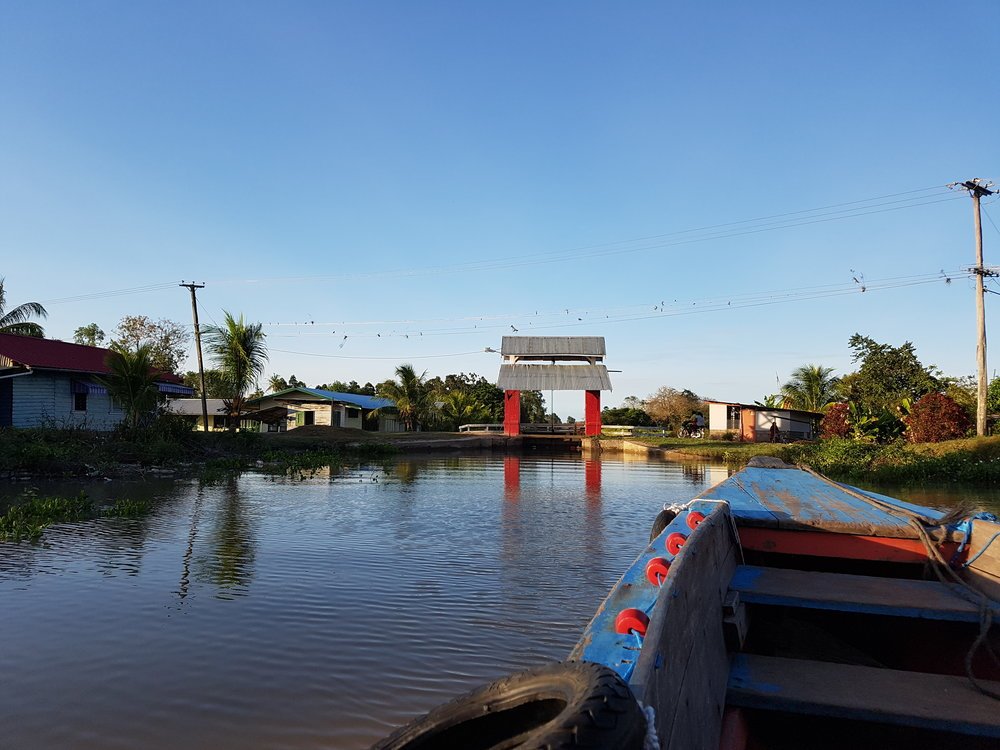 You probably can’t ice skate on the canals of Suriname in the winter.

Suriname is full of surprises. It’s a densely packed rainforest paradise, and an old Dutch colony. The capital, Paramaribo, is pretty. The juxtaposition between old Dutch forts, houses, bridges and canals, and the tropical scenery surrounding them, is wonderful. It’s a bit like a mini-Amsterdam. Minus the drugs and hoards of drunk tourists. Lovely. Although there is probably a higher chance of catching dengue fever or malaria here. Despite almost 40 years since independence, the country’s Dutch links still permeate the very fabric of the country. From the obvious: people speak Dutch. To the less obvious: there are no tourists here who aren’t Dutch (except for me, I’m smugly implying).

The Netherlands’ formal links to Suriname were sniffed out rather abruptly. Suriname’s ex-president Desi Bouterse is still wanted by Dutch authorities for smuggling 1,000kg of cocaine, and was sentenced to 11 years in prison in absentia in 1999. The Dutch government decided to draw a line under the situation, and cut all ties with the country. From the perspective of further puns, it would have been better if his name was Charlie. 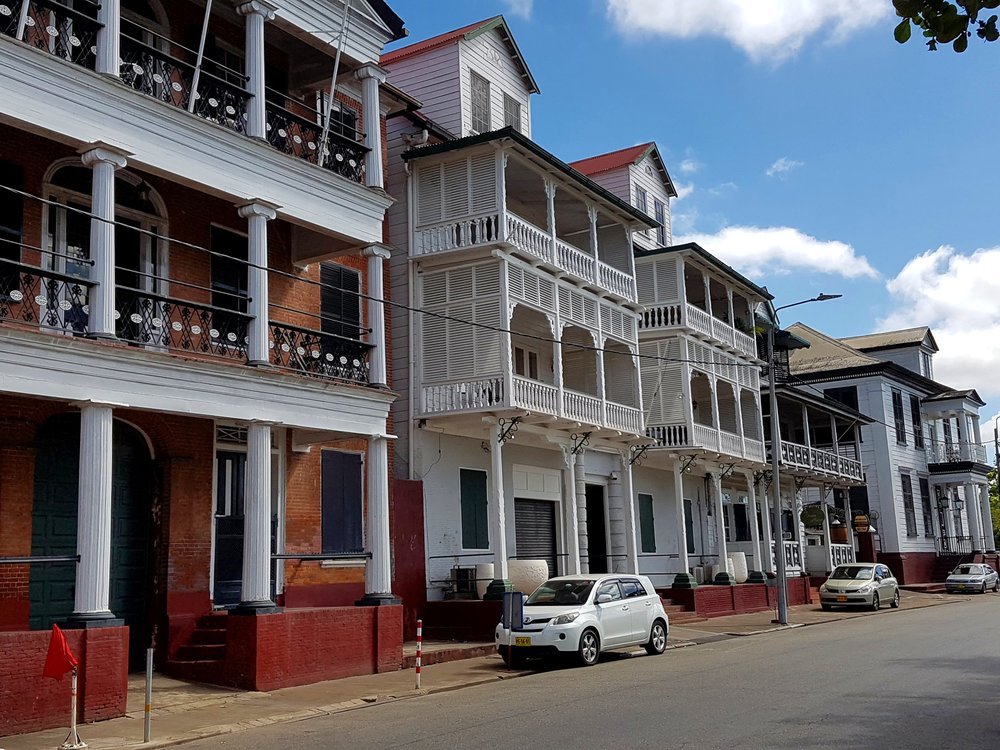 I cycled around old Dutch plantations. I saw rare fresh water dolphins. I strolled – or even strutted – around town like I was an intrepid explorer unearthing new lands. I felt like the American guy who ‘discovered’ Machu Picchu in the early 1900s. He asked some locals to show him where it was. Et voila! It now officially existed, despite being known for thousands of years outside the West. Feeling pleased with myself, I dipped into the bustling central market. My senses were overwhelmed with the sounds of hurried bartering and smells of fresh fish. I felt a million miles from home.

An elderly Surinamese man lazily strolled past me wearing a Leeds United shirt. “Are you serious?!” I exclaimed, in my head. The illusion of isolation vanished immediately. I then became angry… It’s questionable whether you should support Leeds even if you live in Leeds. To do so in Suriname? This man must have serious problems.

I ducked into a local roti stall. Immediately, I slipped back into my pseudo-smug traveller mind frame. Beans, rice, spicy chicken curry, and banana. Delicious and authentic. I chatted (sat silently close) to some locals, huddled around a rickety, dusty TV set in the corner. A chance to glimpse some more of the local culture? My heart fell through the floor. Staring back at me was the smug face of Alan Titchmarsh. They were watching British gardening show Ground Force. Illusion broken again, I charged off to my next destination. Two days later. 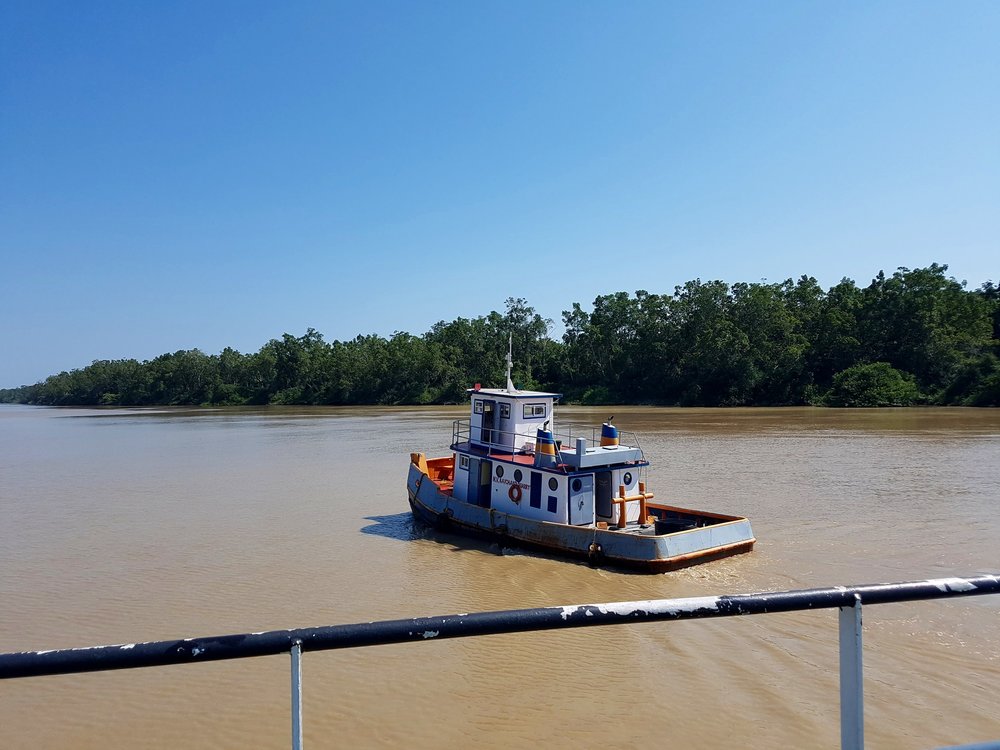 Less a tug boat, more a bumper boat which shoved our ferry across the border into Guyana from Suriname.

Country #84. Guyana is strikingly different from the other Guianas. It feels completely Caribbean, and is a big departure from the Latin American feel of the previous two countries. My 12-hour journey from Paramaribo to Guyana’s capital, Georgetown, was perhaps twice as long as needs be. A lack of formal bus routes between the nations meant I had to squeeze into a people carrier with a local family for the journey, who were all quite a bit wider than me.

The border crossing ate up much of the time. It took the best part of two hours to cross a two-mile wide muddy river. The ferry’s engine was broken, or so I thought. The engine has not worked for years, apparently. To cross the river, our ferry was incessantly shunted by a much smaller tugboat. It sort of felt like being in hundreds of very small car accidents for a couple of hours.

Once we had crossed the river, we careered through dense rainforest and colourful villages in a minibus clearly not fit for the number of passengers it was carrying. These villages had equally colourful names: Dundee, Scarborough, and Yeovil, to name but a few. Clearly British Colonialists were not as good as choosing town names as they were at enslaving nations and exploiting their national resources. Maybe the message from London was: “Name some places after small towns in the UK that need a confidence boost”. I’m not entirely convinced it has worked. 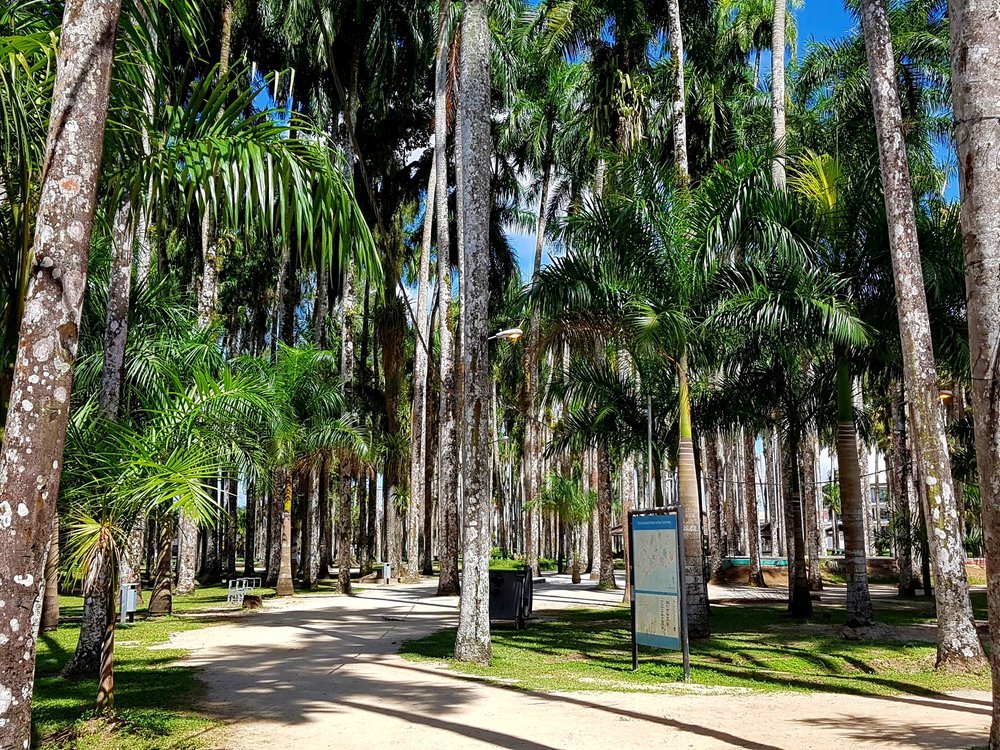 A labyrinth of palm trees.

The cultural makeup of Guyana is fascinating. A mix of African, Indian, Malay, and Burmese populations, whose ancestors were shipped around the world as slaves to help out with the somewhat ironic British mission to ‘civilise’ the world. But despite all of the religious and cultural differences, everyone gets on extremely well. They love cricket and drinking. And that seems to serve them just fine. If anything, it was living proof that communities who all believe different theist magical stories can get along just fine.

Georgetown is a curious, intriguing city. It’s made up of dilapidated wooden colonial buildings, colourful houses, and people driving slowly while playing reggaeton as loud as their sound systems will let them. Several guidebooks had told me that Georgetown is not an entirely safe place, so I sensibly took precautions while walking around. These precautions consisted of a) puffing my chest out a bit, as if this would in any way deter a potential attacker, b) not bringing any valuables out with me, and c) resolving to give anyone who approached me whatever they wanted, instantly. 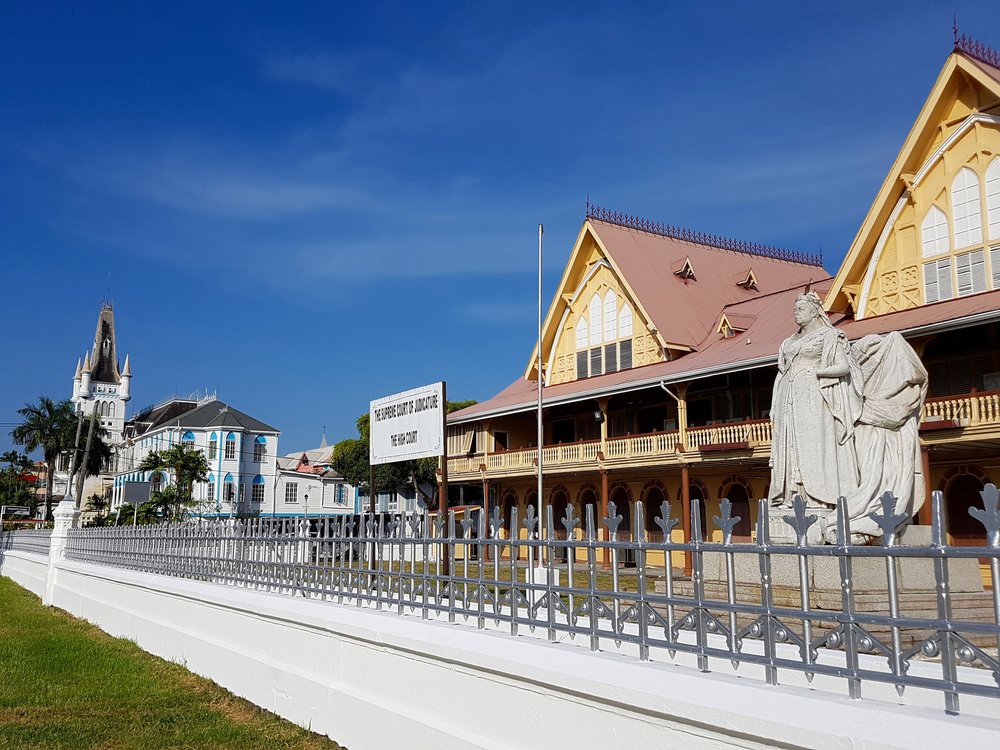 Another statue of Queen Victoria, in another city called Georgetown. There are over 50 towns worldwide with the same name, suggesting British colonialists lacked invention when it came to naming places, but not when it came to invading places.

The central market was potentially even more hectic than the one in Paramaribo. I could barely move at one point, because I was sat down in a chair eating. But even when I stood up again, it was very hard for me to apologise my way through the bustling crowds. There’s an extremely good chance I said sorry more in one day than any person has in Georgetown. And all it did was draw attention to the fact that I was probably the only tourist in the country. I hadn’t seen any by this point. 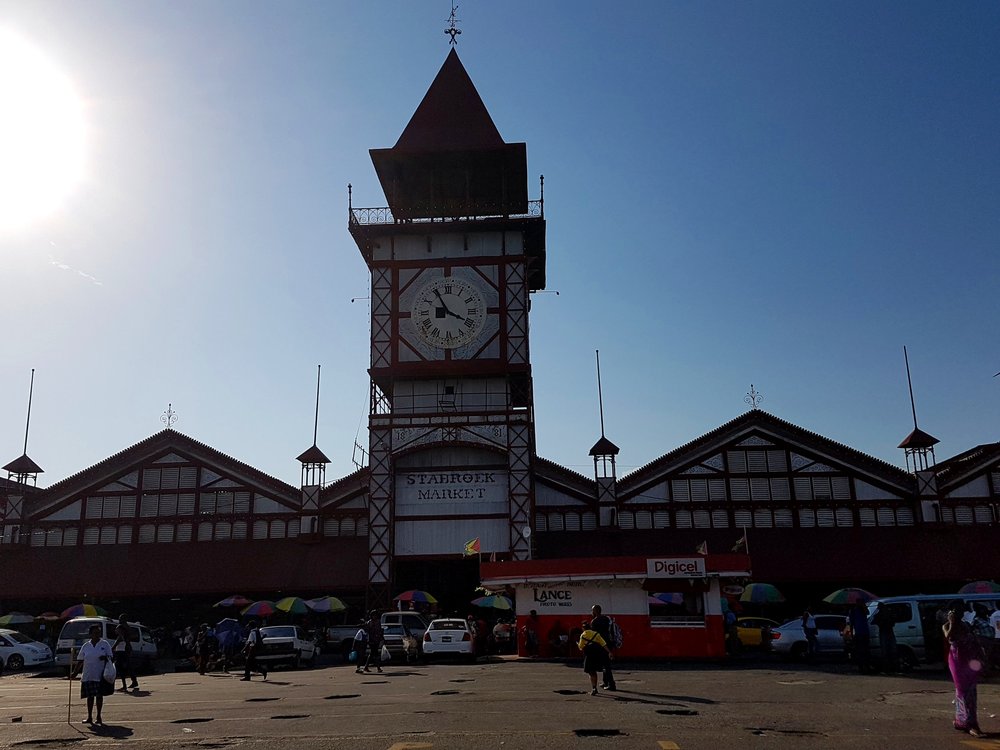 The lack of travellers here did have its setbacks. Most tours weren’t running, with tourists staying away due to fears about the Zika Virus. This meant a planned trip to the stunning, or allegedly stunning, Kaieteur Falls would have to wait until the next time I just happened to be passing through the country. I had to make do with a trip out into the lush, overbearing rainforest, which carpets the relatively small country. Having spent three months in the rainforests of Borneo in the year I spent between school and university, which I am loath to call a ‘gap year’, not so pleasant memories of leeches and trench foot came rushing back to the surface.