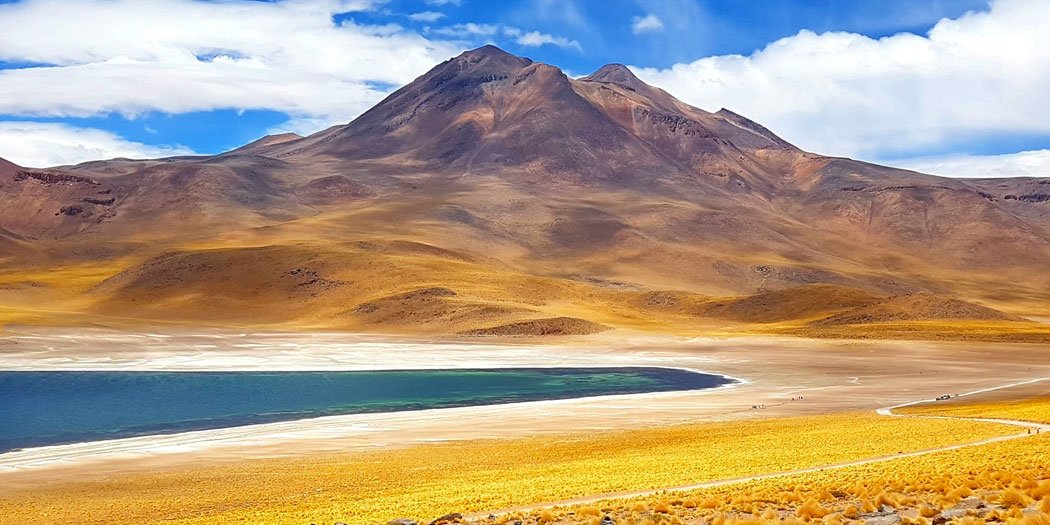 Chile – A Breathtaking Slither Of Wonder

Country #87. Chile is one of the most beautiful and geographically diverse places on the planet. For good reason: it’s really long. It stretches around 4,000km. It’s also potentially the most developed country in Latin America. It manages to feel quite European in some areas, a bit like Argentina, but being English here appears to be slightly less of a negative. In terms of natural beauty, it takes the top spot in Latin America in my view. And would be vying with Namibia to be the most naturally beautiful country on the planet, with stunning and secluded landscapes that have to be seen to be believed. Visit it. 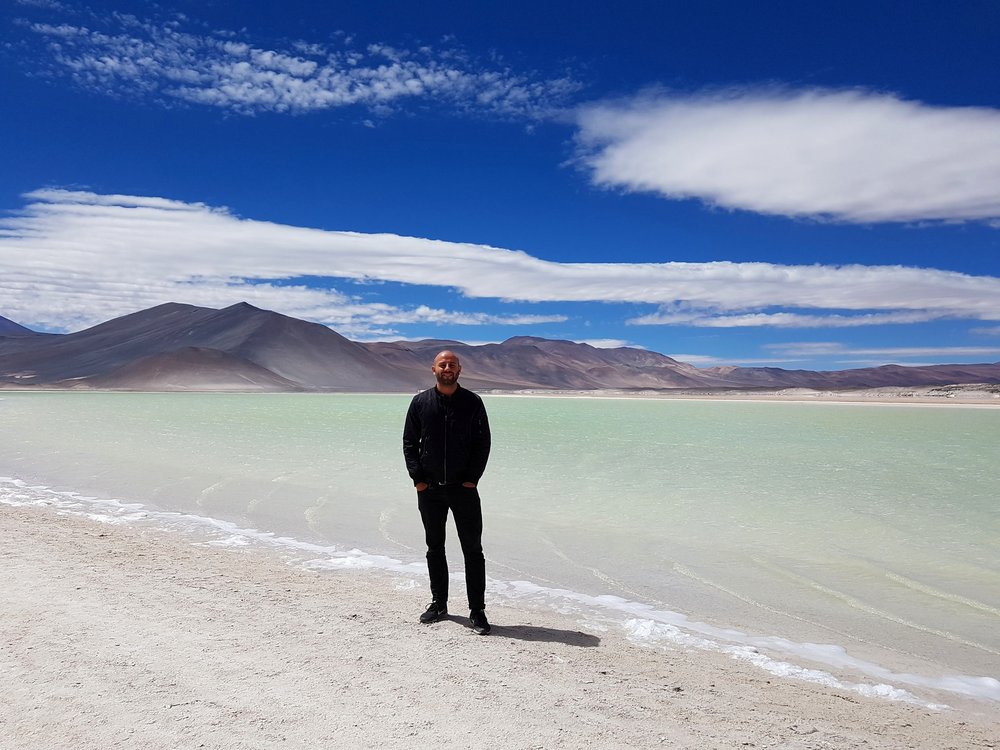 I have no doubt that this will be an album cover one day. The majestic Altiplano Lakes, San Pedro de Atacama.

The North of Chile, belying its name, is not very cold at all. In fact it’s the driest place in the world. Instead of people and cities, you have sand. And instead of trees and lakes, you have more sand.

The one exception is Iquique, a coastal town set against the backdrop of 100m sand dunes. Iquique is described as a ‘surfers paradise’ by Lonely Planet. It gave me constant reminders of my ability on a surfboard: none at all. And no matter what anyone tells you, neither the body nor the inexplicably named ‘boogie’ versions of the sport are viable alternatives. They are the equivalent of turning up at a skate park on a scooter, which as I think we’d all agree, should be universally punishable with a sharp blow to the back of the head. With a skateboard. 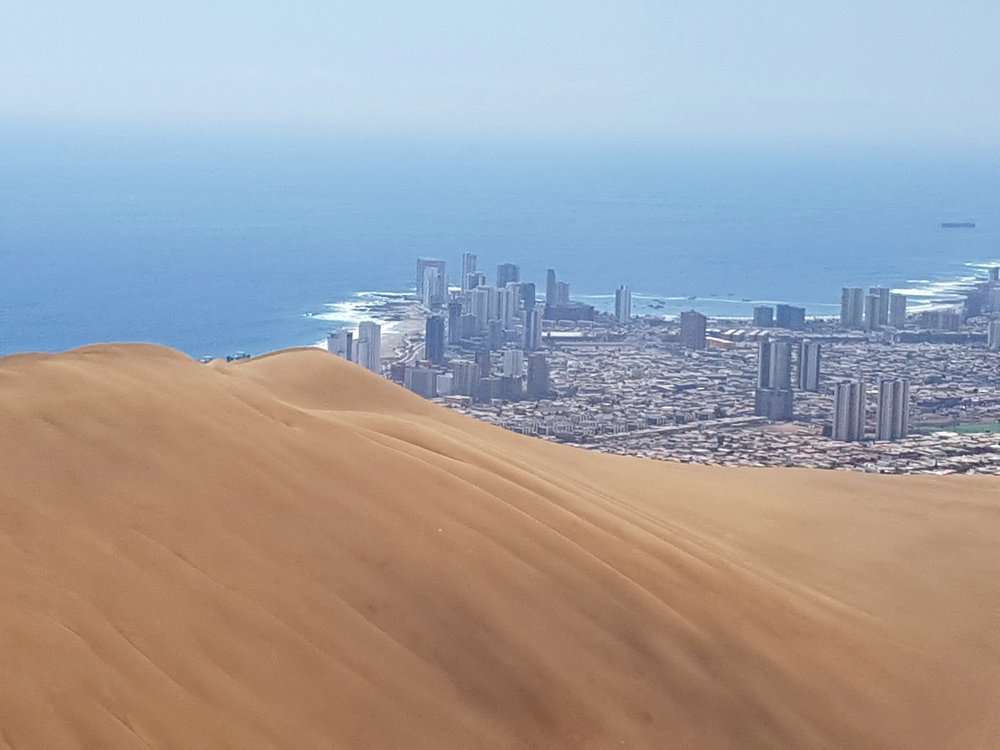 Lunar Landscapes And The Milky Way

I spent four days in ‘San Pedro de Atacama’. With my Spanish improving by the second, I deduced this to mean: “San Pedro in the Atacama”. I was on course to be fluent by Christmas. The Atacama Desert has stunning, lunar landscapes that can best be described… by looking at the photos. No combination of words do it justice. A combination of the altitude, colourful rock formations, volcanoes, flamingos, and strangely coloured lakes, made me feel like I was in a sci-fi movie. 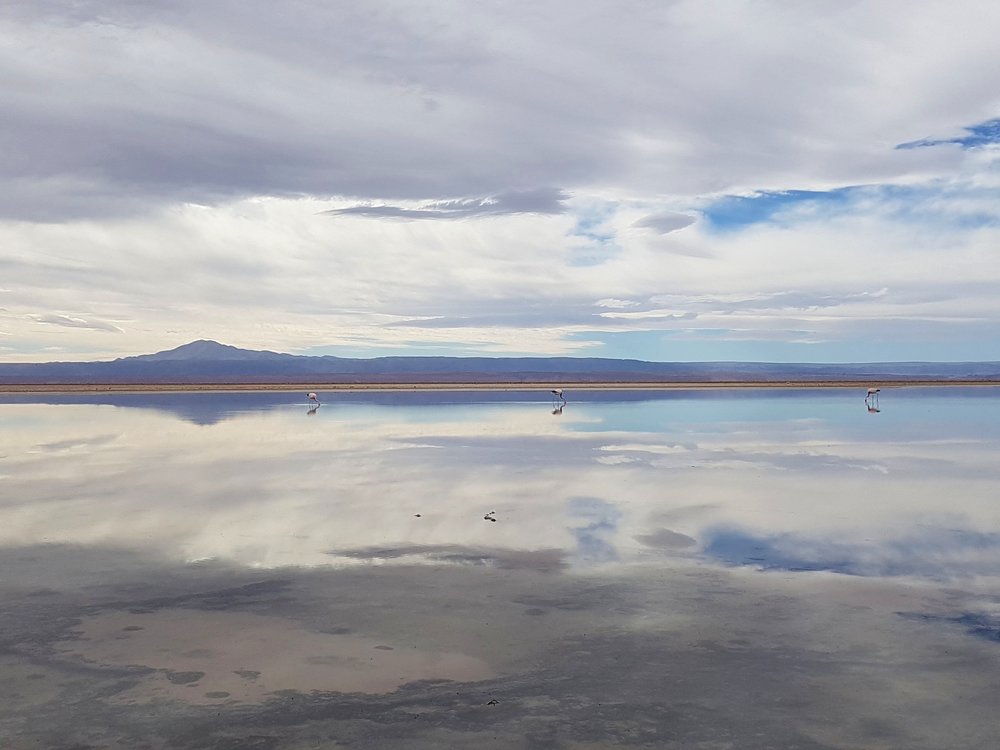 If you turn this picture of Salar de Atacama upside down, it almost looks the same. And I also made you look stupid if you turned your screen upside down in a public place to test this theory.

On the topic of space, stargazing in San Pedro is a treat. Without rain and at high altitudes, San Pedro has some of the best night skies on the planet. The world’s largest telescope (made up of 60 satellites) recently opened here. It aims to seek new galaxies and extraterrestrial life. During the stargazing, I could not for the life of me get the voice of likeable British TV Professor Brian Cox out of my head, telling us about “the wonders of this universe” in an accent which is so nasal at times he may as well be talking out of his nostrils.

The stargazing was as beautiful as it was terrifying. The skies were littered with stars (somewhat predictably). You could see the Milky Way and shooting stars. Most unsettlingly, you could notice the Earth slowly rotating against its starry backdrop. It was helpful for perspective. We are on a tiny planet spinning around in the middle of absolutely nowhere. There are more stars in the universe than grains of sand on Earth (roughly 100,000,000,000,000,000,000). From this perspective, I’ll try to be less upset when the tube is two minutes late, it rains, or some strangers on the TV kick a ball in a net against my ‘team’. 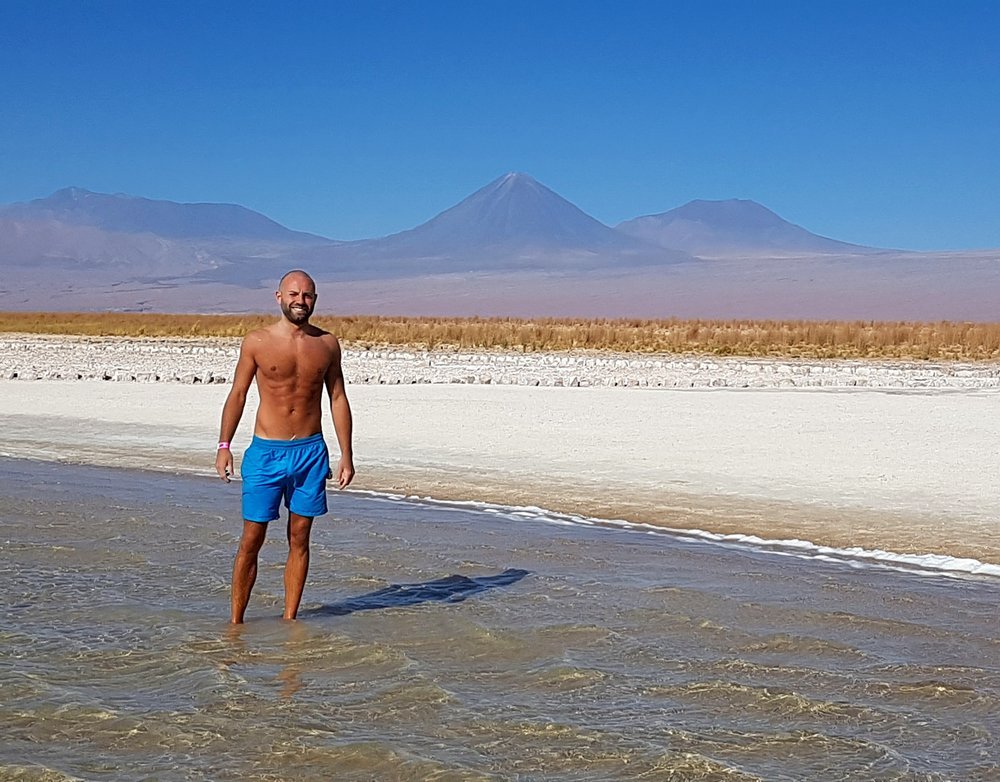 My next stop was Valparaiso. This is a small, graffiti-covered city built into a hillside that rolls directly into the sea. It’s renowned for street art, an alternative attitude to life, and an ‘anything goes’ attitude. Having spent several years living in trendy Bristol, England, I knew I’d fit it in here. Probably best not to mention that this was to attend the University of Bristol and I lived in the leafy suburbs. I did go clubbing in the edgy parts of Bristol, but we always got a taxi home. Very alternative. Highlights in Valparaiso were a street art tour, which I ‘got’ a bit more than the rest of the tour group, and a visit to the stunning house of Chilean artist Pablo Neruda. 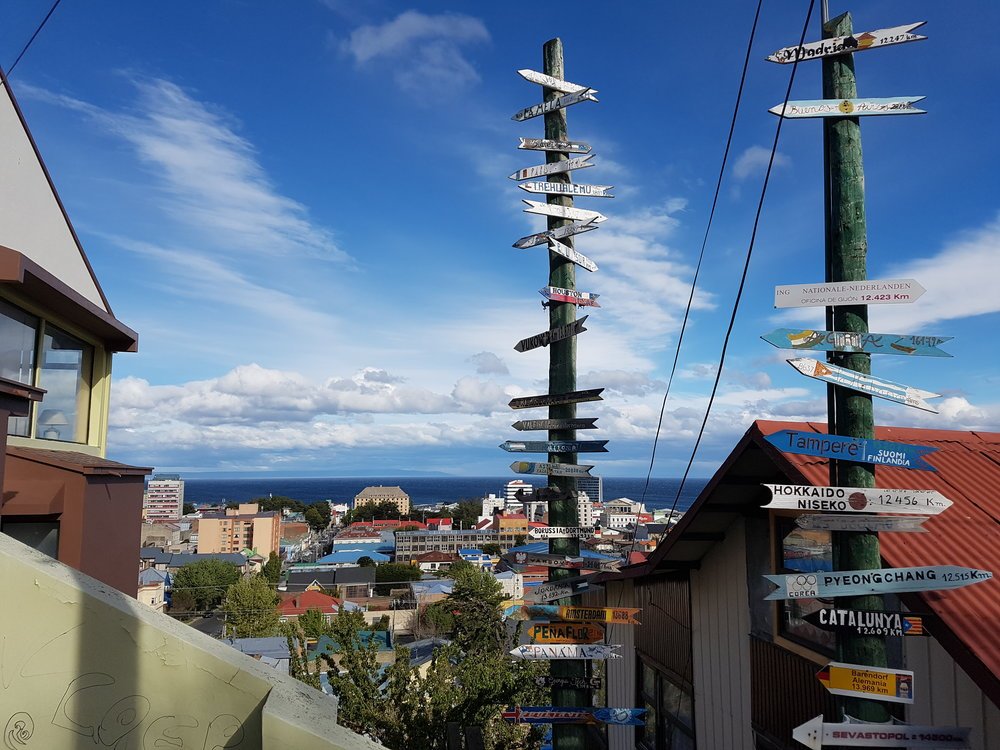 Really far from home. And most other places in the world. Punta de Arenas.

I then headed further south with my mum. Punta de Arenas is the most southerly city in the world. There was added significance to this trip, due to my South American heritage (hence my impeccable Spanish). My mum’s father grew up here. He moved to Uruguay when he was in his early twenties, where my mother was born. Given that my South American relatives were all of British descent, sadly, my name is very Anglo Saxon (read: boring). That said, I did find out where my middle name – Mackay – came from. It’s neither a traditional given name nor a good name. So go and have a good laugh at it. 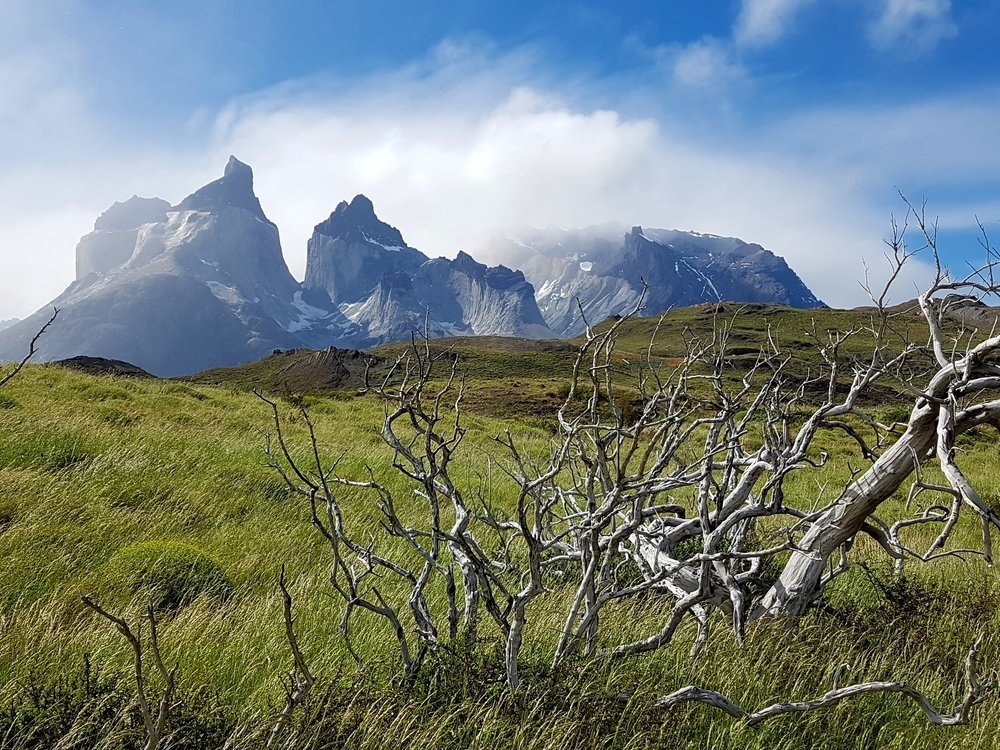 Also know that Mackay is the maiden name of my great-great-grandmother, whose tombstone we found in a windswept cemetery in Punta de Arenas, reducing my mother to tears. Not so funny now eh? It was very strange to think I had relatives growing up here, in this windswept and remote outpost at the end of the Earth. It’s hard to comprehend what living here would have been like given the connected world we now live in. This was especially true knowing my granddad got packed off to boarding school in Buenos Aires for nine months of the year. From the grand old age of eight. 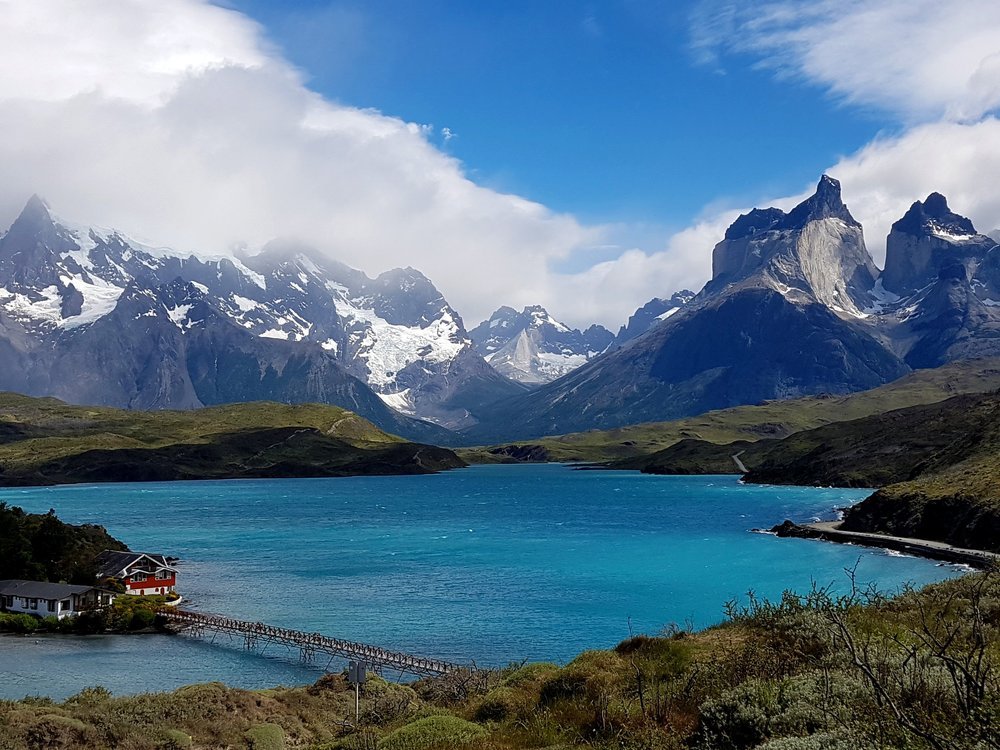 Torres del Paine, Patagonia. A beautiful part of Chile, not just a clothing brand for insufferable, coffee loving, and vegetarian millennials, like me.

Beautiful? Yes. A Paine In The Arse To Climb? Yes

Mum and I set off for Torres del Paine after a couple of days. It’s a national park whose beauty defies words. It is perhaps the most beautiful place on Earth. 3,000m mountains jut vertically and impossibly into the sky. To put this in a perspective that probably only I can understand (I like tall buildings and go on skyscraper forums in my spare time… this unfortunately isn’t a joke), that’s the equivalent of ten London Shards stacked on top of each other. When you look up at the giant granite towers the scale of them is truly hard to comprehend. 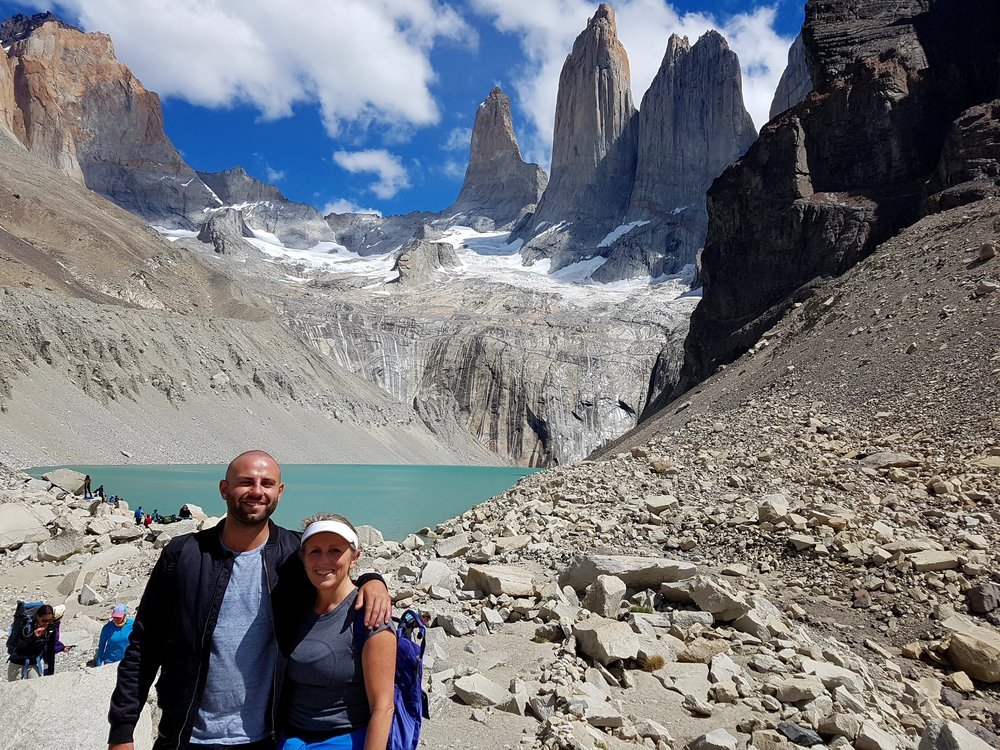 Mum and I, with the looming Cordillera Paine in the background.

You can also take a boat trip around the park’s luminous aqua-coloured icebergs. This may seem pleasant enough, but the 50-person boat we were on would sink if it hit even a small one according to the captain. I knew about the boat’s vulnerability to icebergs, only because the captain told us personally. Only after allowing my mum to drive the boat for a bit. 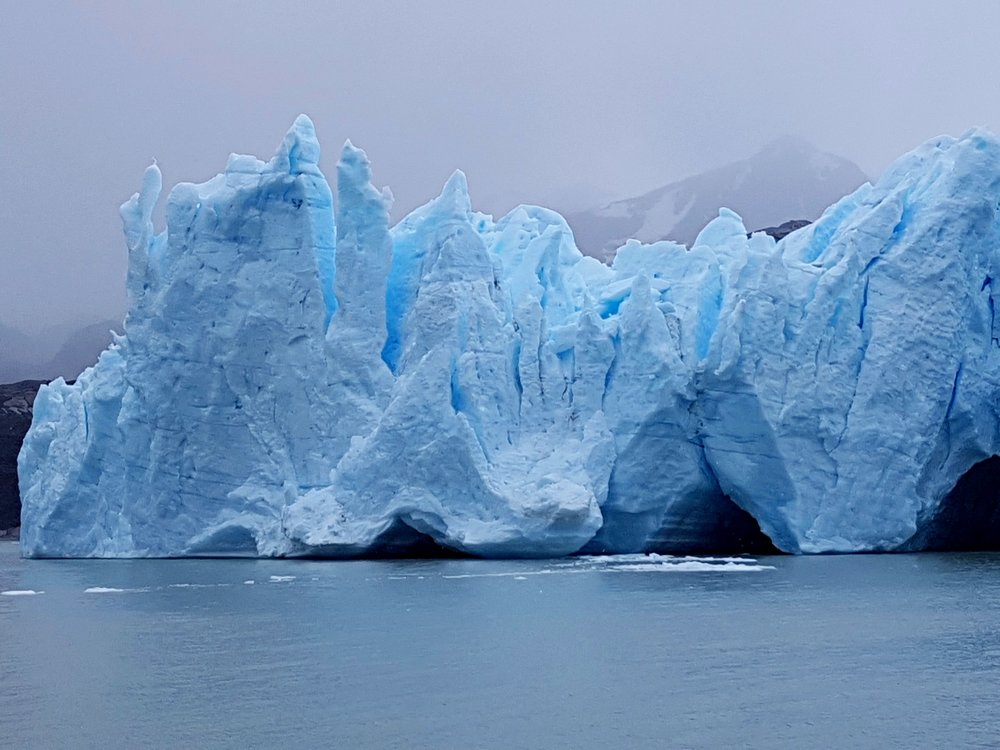 Ice. Lots of it. At Glacier Grey, Torres del Paine.

In retrospect, telling us afterwards was probably a good decision. A marginally better one than the decision to let a complete stranger, who has zero nautical experience, and who can just about see over the steering wheel, drive the boat. What’s also good about the park is that there are lots of llamas. I think we can all agree, they look stupid and probably are stupid. Perhaps only marginally less so than camels. Easy prey for pumas (the animal, shoes aren’t carnivorous).