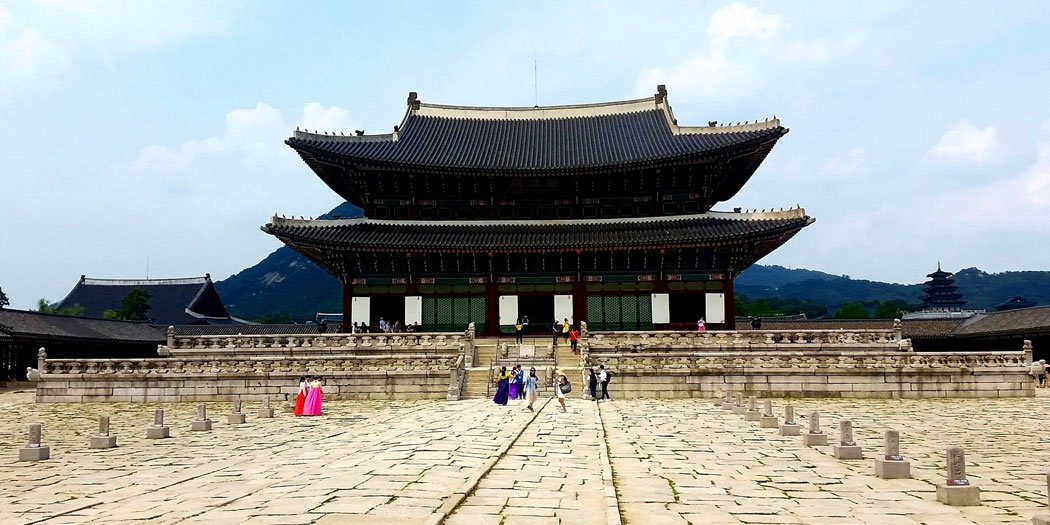 Country #77. “Oppa is Gangnam Style, Gangnam Style”. Korean superstar PSY’s 2012 hit is quite shockingly still one of the most watched videos in human history. It may seem like light-hearted fun on the surface. After all, it features a man in his mid 30s wearing a white tuxedo, dancing like a horse. 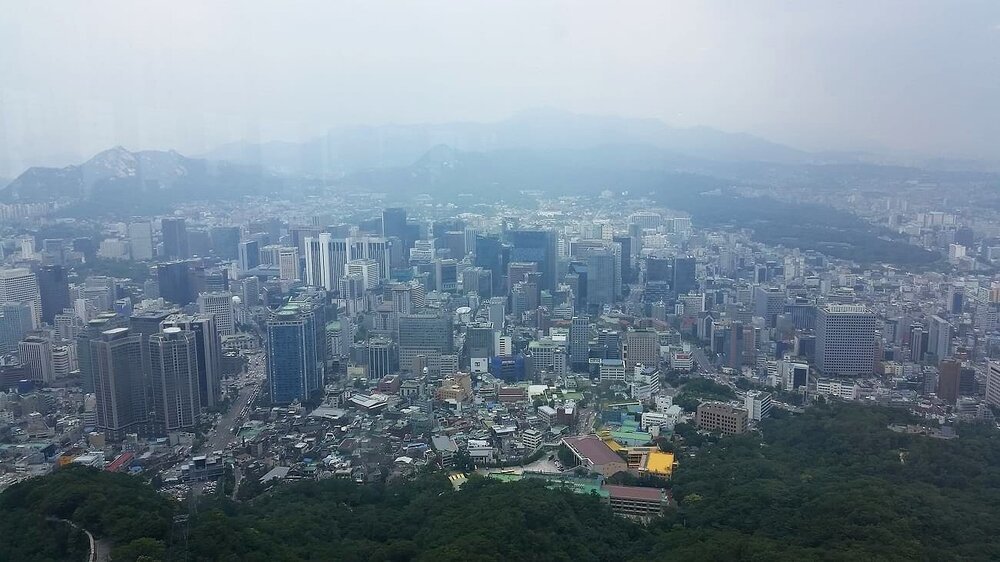 But a much warranted look into the etymology of the song tells a different story. ‘Gangnam Style’ is a Korean neologism that refers to the upper class district of Gangnam in Southern Seoul. The horse dance? A satirical reference to wealthy girls being given horses by their fathers. Was this seemingly fun-filled smash actually a hard-hitting critique of the growing social and economic inequalities in modern Seoul? Probably not. Most of PSY’s song lyrics appear to make only limited sense. And the song reportedly made him over $8 million from YouTube streams alone, so I’m sure he won’t mind my criticism. He could also now live in Gangnam if he wanted. 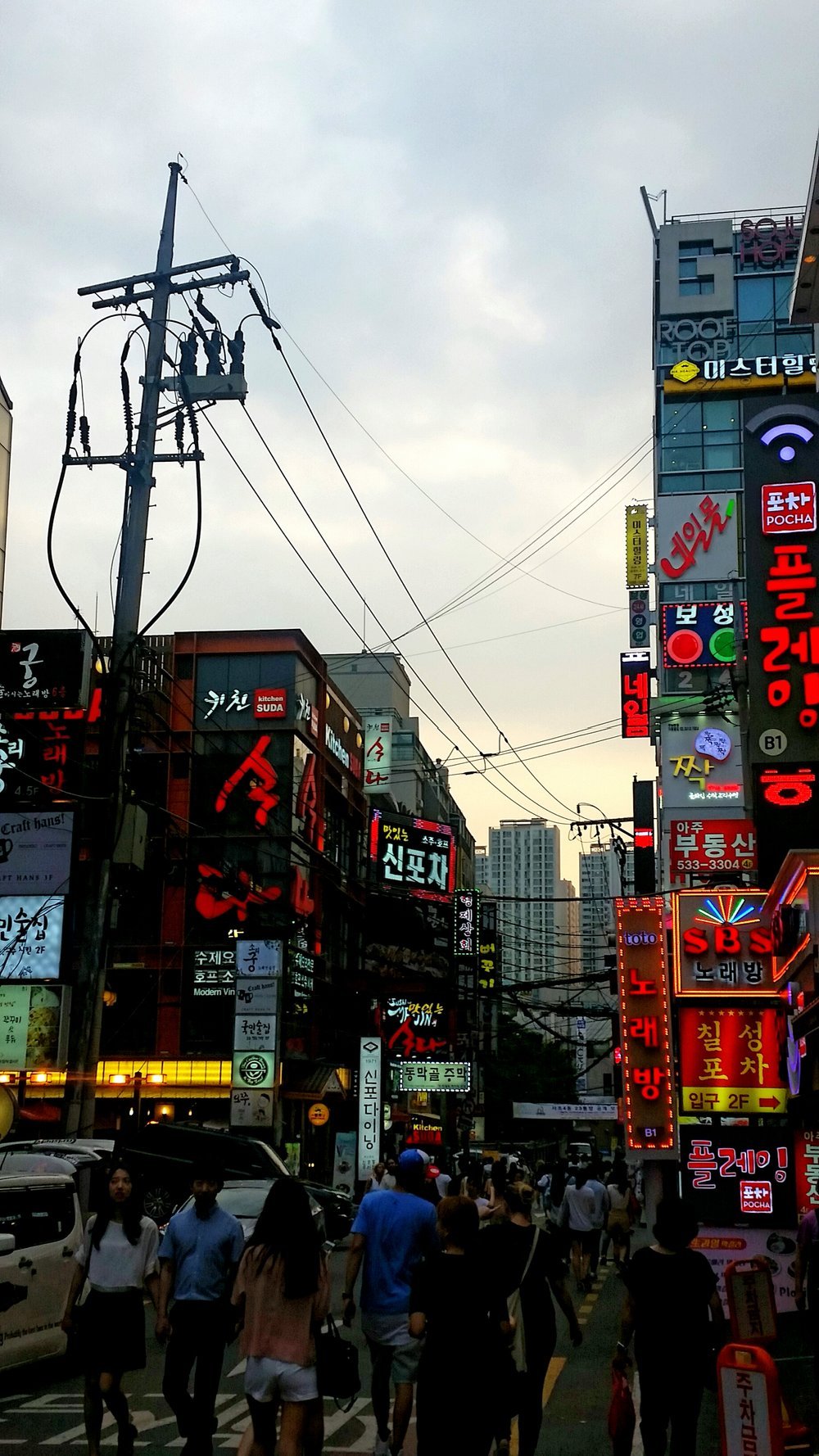 The bright lights of Gangnam.

So, what is Seoul like? ‘More interesting than Taipei’ my last destination, in four words. Or ‘like the future’ in three. It is without doubt the most space-age place I have ever been. It’s immaculately clean. The transport is well run. Trains have air conditioning, and are large enough for actual human adults – a novelty coming from London. Many people here spend more of their lives looking at their smartphones than the real world. On this point, I agree with unstable tech lunatic Elon Musk. He posits that we are already cyborgs with two brains. One (existing and real) in our heads. And our second brain, which we have in our pockets. Or at most, a few centimetres away from our faces when we sleep.

Seoul is vast. Every building scrapes the sky. Concrete extends in all directions into the seemingly endless horizon, punctuated by flashing neon lights. You get used to crossing roads which are often over ten lanes wide.

The result is a feeling that Seoul is an impossibly large metropolis. An extremely interesting place to visit, but perhaps not to live. You could say the place is slightly soulless. I was going to spell soulless as ‘Seoulless’, in case anyone missed the pun, which was intended. In fact, I thought of it while walking around the city. I was so pleased with it that I wrote it down on my phone. But by the time I had taken it out of my bag it became less and less funny, and actually started to annoy me a few steps later down the street. To the point I now regret mentioning it at all. 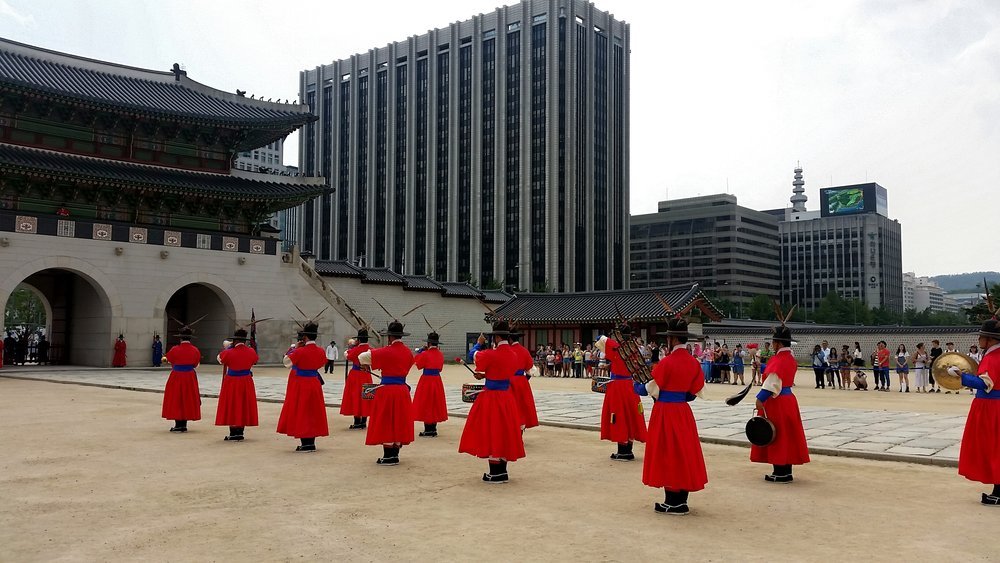 Here are the three best facts about South Korea. In my opinion, obviously.

I visited the palaces of ‘Changdeokgung’ and ‘Gyeongbokgung’ (catchy right?), which are both picturesque. Seemingly, no palace or castle in a major capital city is complete without the obligatory changing of the guard/tourist ritual with lots of pageantry. To be fair, this one was impressive. So, it was worth putting up with the hoards of irritating tourists, of which I was clearly a contributing member. 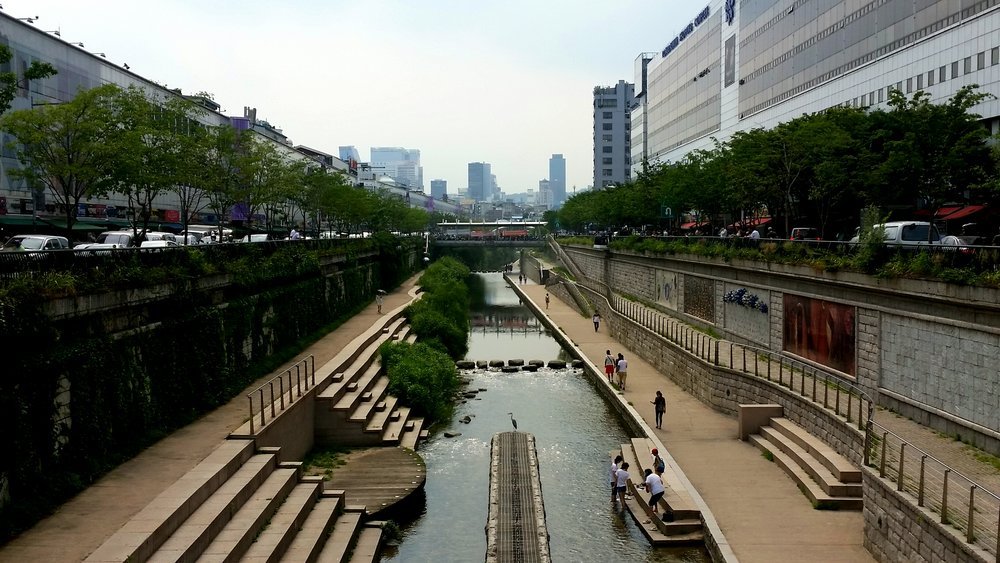 That said, given a bias towards contemporary architecture, I preferred ‘Cheonggyecheon’ sunken park. A bit like the High Line in New York, this is a former sunken highway which has been transformed into a pedestrianised park with a stream running down the centre of it. The late Zaha Hadid’s Design Museum, like most of her work, is also stunning. It’s a twisting wave-like structure which looks decades ahead of its time. She designed the London Aquatics Centre, which sits incongruously next to the architectural turd that is the Westfield shopping centre. 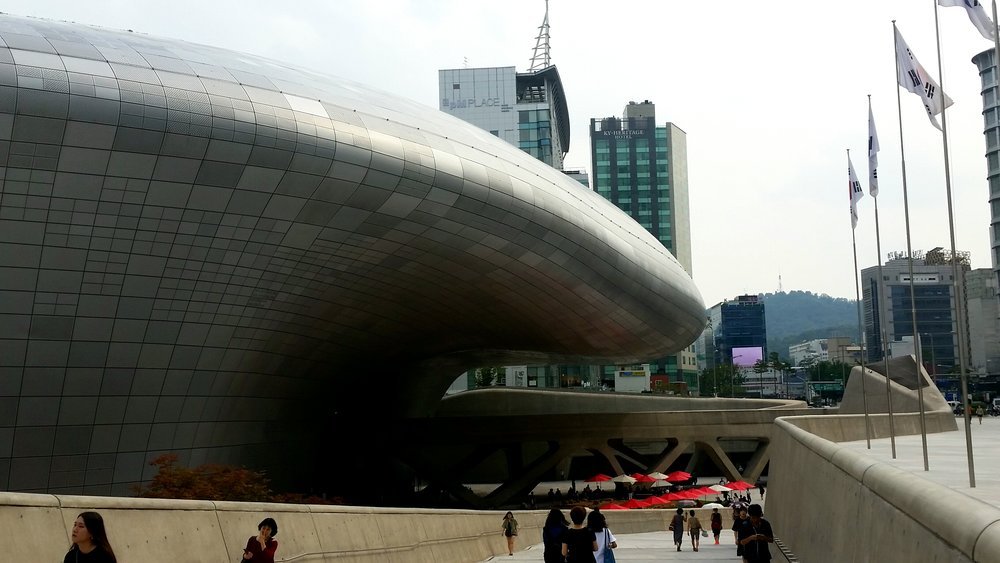 Zaha Hadid at her best. Flowing forms which seem to melt into their surroundings. 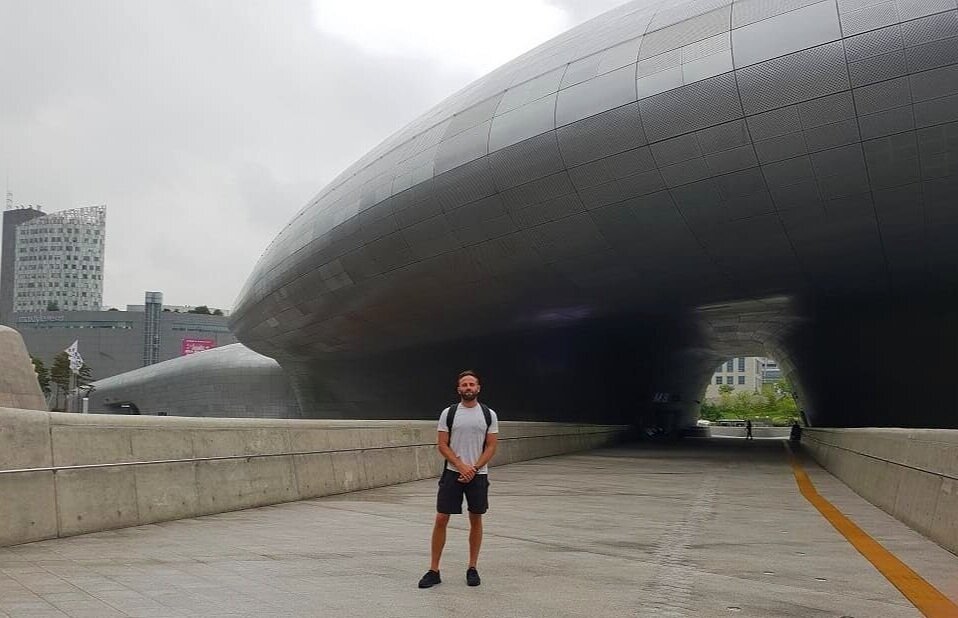 Soju Want To Go For A Drink?

That night, I proceeded to drink lots of ‘Soju’, the most popular poison available in Korea. It’s like a stronger version of white wine, that you shot instead of sip. It does taste similar (and better than) Japanese ‘Sake’, which isn’t saying much depending on your palate. I loved it, because I’m more cultured than you. The Korean barman from our hostel kept ploughing us with the stuff (in what was hopefully a non-malicious way), before taking us all on a night out. This, as with most ‘nights out’ means: lots of great apes, who mostly don’t know each other, crushing into small underground places and drinking harmful chemicals together. Fun!

Koreans really like to drink. As much as the Brits? Probably. In a much less aggressive, friendly manner? Definitely. Go to Ireland and you can see that this is perfectly possible. It also helps that most Koreans we chatted to spoke good English. This enabled me to do what many tourists with no grasp of the local language do when trying to fit in: shout the name of a famous person you know from that country at people. This time, it was Park Ji Sung, a Korean footballer who played for Manchester United a few years ago. To those I bothered, I apologise.

Responses to my inane ramblings were mainly a shrug of the shoulders or a vague nod of acceptance. It must be annoying. The equivalent would be if every Italian tourist in London kept smiling and shouting “David Beckham” at you, expecting some sort of pat on the back in response. I would actually pat them on the back to be fair. I love him. 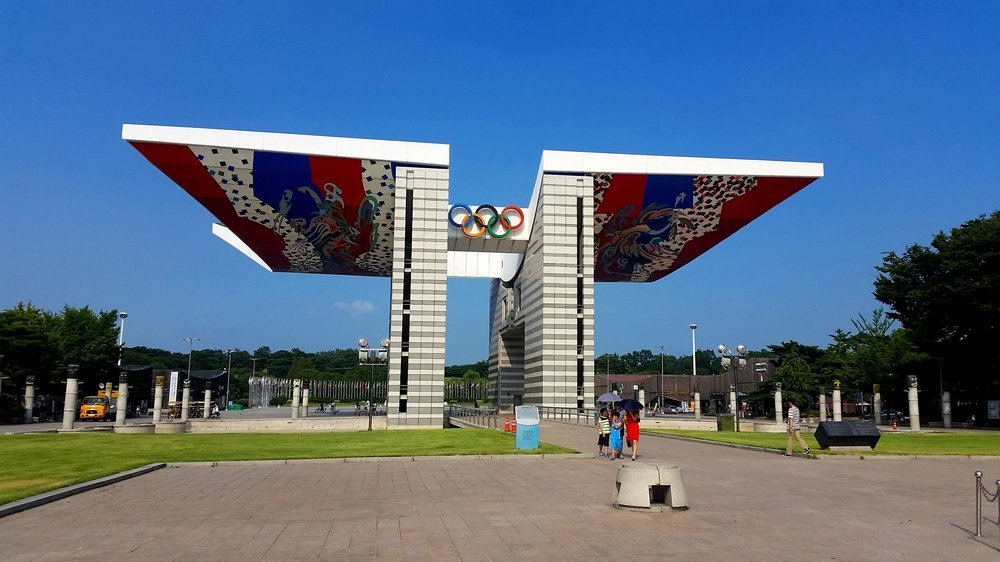 The Smug Illusion Of Chopsticks

Soju. Bad at the time, much worse the next day. I had a delicious Korean BBQ, which made me feel temporarily better and then immediately worse. Korean food is delicious. Although if British cuisine is your baseline, this probably needs to be elaborated on. Korean is a bit like a fusion of the better parts of barbecued western food, but with rice, noodles, and kimchi on the side (rotted cabbage, but very tasty actually). For some reason, you feel less guilty and more cultured eating barbecued chicken when it comes with noodles and you use chopsticks (instead of out of a gigantic cardboard bucket while sat in a car). 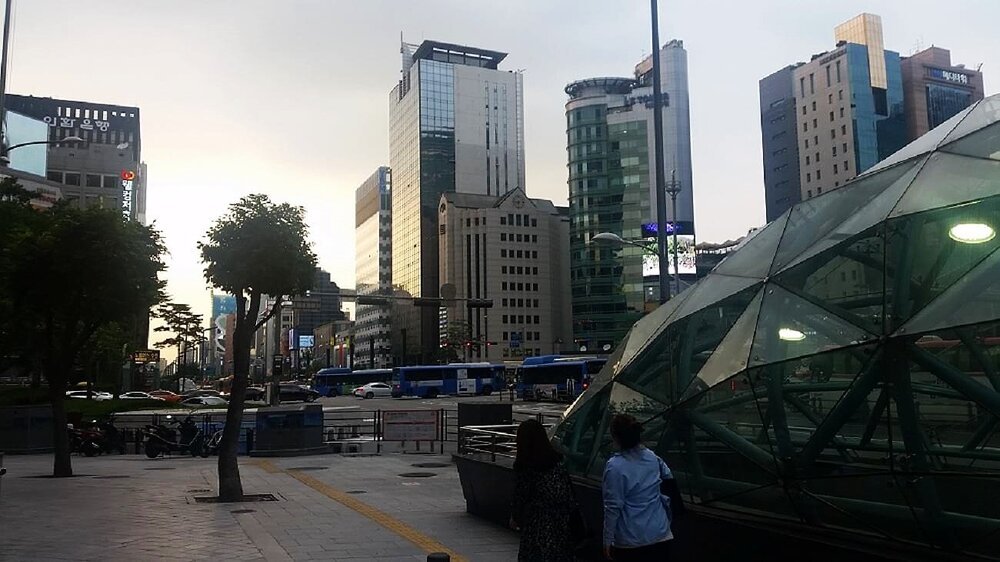 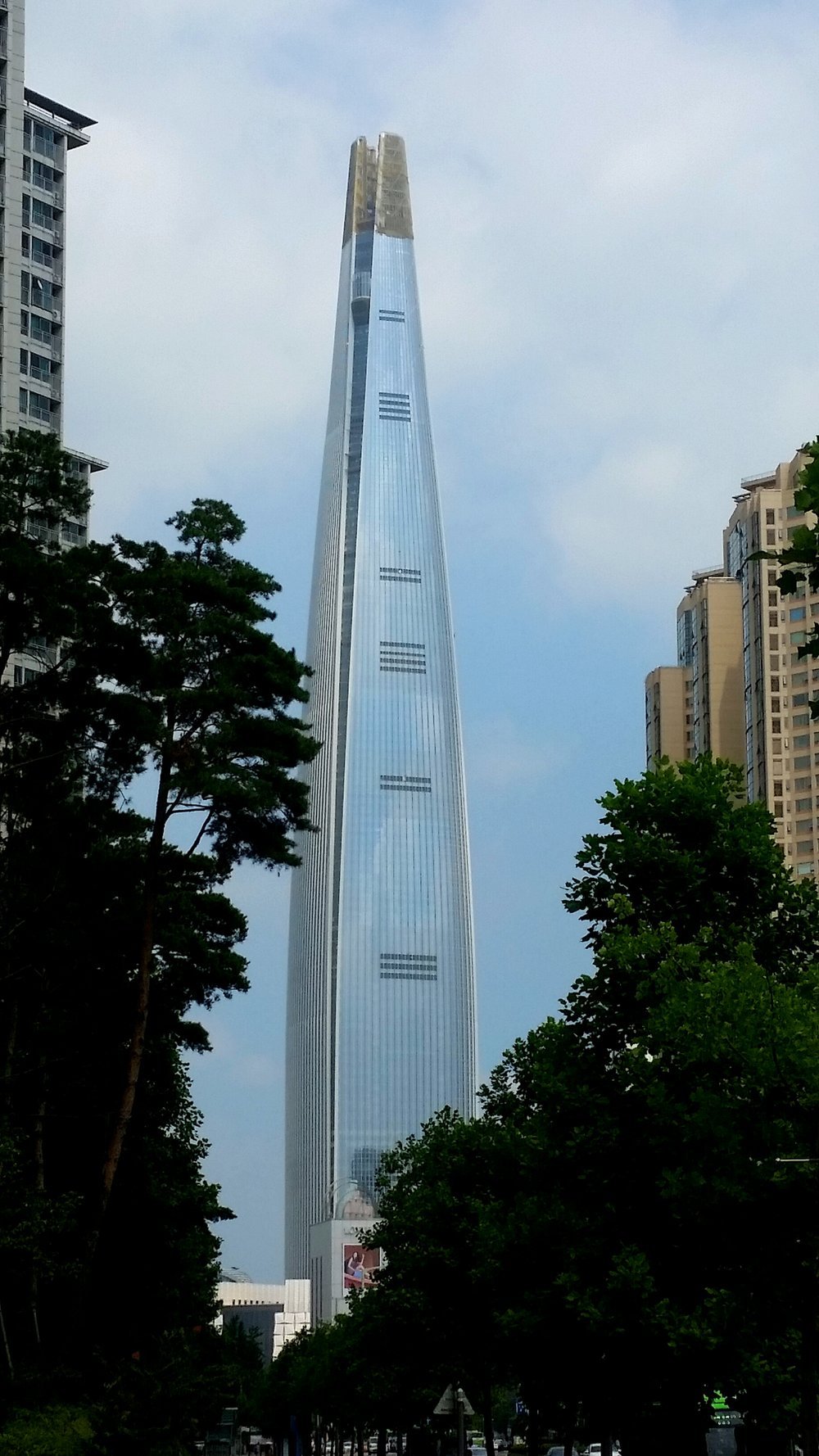 The Lotte World Tower, the Shard’s taller and better at most other stuff cousin.

The Lotte World Tower, recently completed and one of the tallest buildings in the world, looks like London’s ‘The Shard’ on steroids. It has a similar design but is twice the height. It looms over the city’s beautiful Olympic Park, which I had the pleasure of lugging my torso around.

Seoul’s 1988 Olympic Park: I have been lucky enough to have visited all of the olympic parks where the games have been held over the past 25 years. In my experience, a 16-day celebration of physical human endurance, drug taking, and authoritarian states flexing their muscles leaves behind a giant car park with a few decaying stadiums. Sydney ‘00, Athens ‘04, Beijing ‘08, and Atlanta ‘96 fit this mould. London ‘12 hasn’t been too bad. So long as you ignore the fact that West Ham only have to pay around £4 to rent a stadium which cost the taxpayer £1 billion.

But I was surprised that Seoul’s was the best. The park is landscaped beautifully. It has a natural lake, with modern art sculptures dotted all over the place and tree-lined boulevards stretching into the distance. For such a large metropolis, it’s an oasis of calm. Birdsong could be heard over the surrounding metallic hum of urban life. This, along with literally tens of people on Segways and an unnervingly large number of adults playing ‘Pokemon Go’ on their smartphones, added to the park’s leisurely atmosphere.

I’ve just read that apparently huge areas of slums were removed by the then autocratic South Korean government to make way for the Olympic Park, so this kind of invalidates all of the nice things I just said about it. At least the Russian and Qatari World Cups will be bastions of tolerance and labour market protection. If you don’t like sport, apologies for this section. If you didn’t enjoy the bit about architecture as well, I advise you to stop reading any of my updates (if anyone actually is). I’m fond of humans moving small spheres around, as well as giant artificial objects, so they will probably come up again.