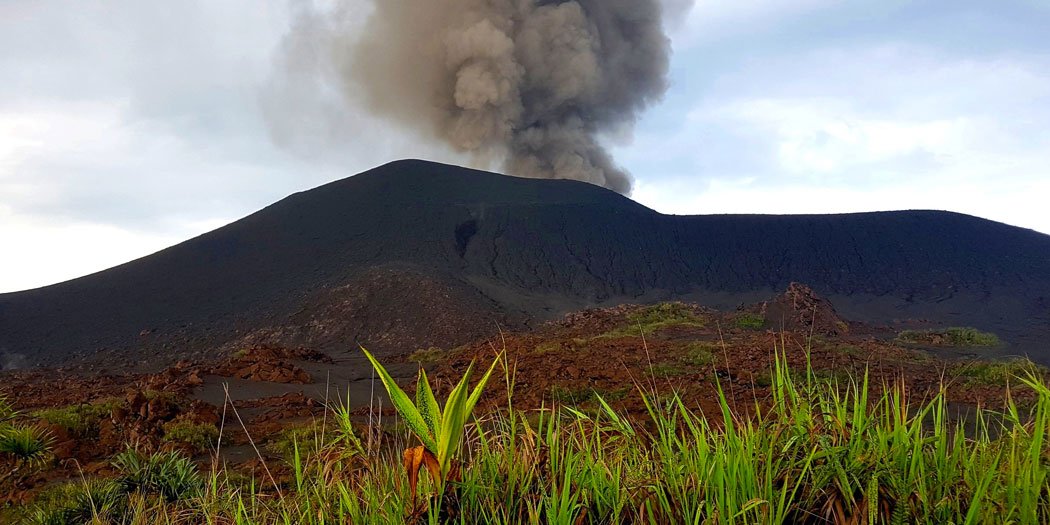 Country #89. Vanuatu is regularly ranked as the happiest place on Earth. It’s also one of the countries most prone to natural disasters in the world. So clearly people have a very optimistic view on life here. Indeed, a man I met told me how his house sadly got destroyed by a massive hurricane last year. He was literally laughing and smiling while recalling the sad tale. He had to hide for 12 hours in the wreckage of his house, which again seemed to really tickle him. This optimism and friendliness greeted me wherever I went in the small archipelago in the Pacific Islands, featuring beautiful white beaches and turquoise water. And a huge, constantly erupting volcano. 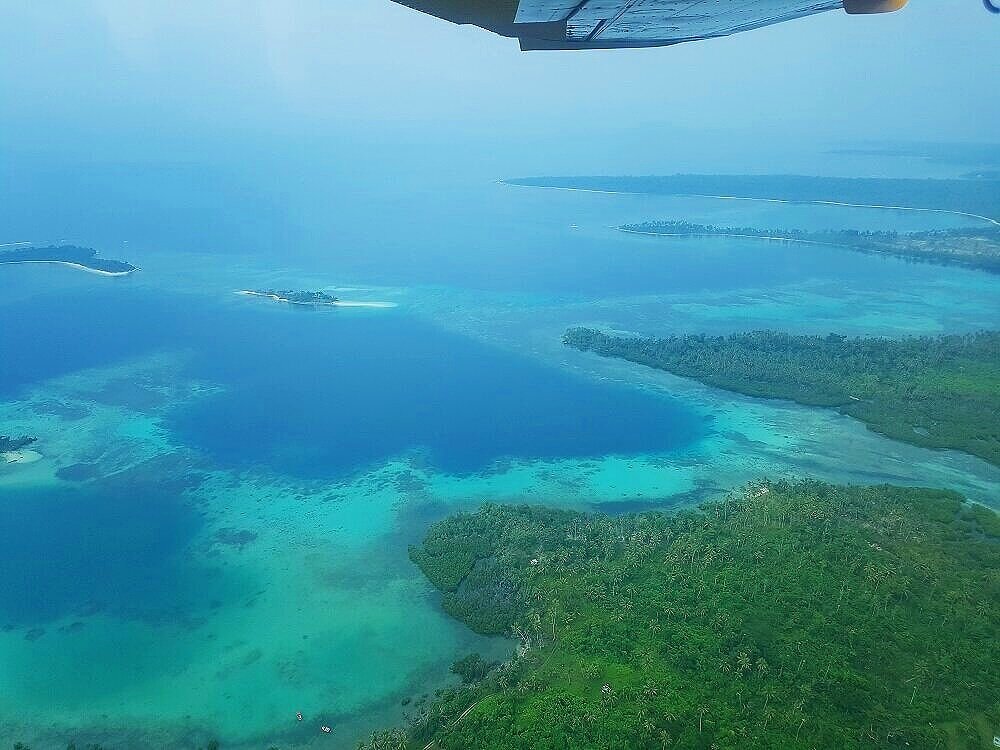 Approach to the capital of Vanuatu, Port Vila.

Port Vila. The calm before a (needlessly dangerous?) trip to an erupting volcano.

I arrived after a short flight from the Solomon Islands. “Phew,” I thought, as my foot touched the tarmac. I had escaped the same fate as one of the first Britons to arrive on Vanuatu, the missionary Reverend John Williams. He strode confidently ashore in 1888, and was promptly eaten. I spent a few days relaxing in the capital, Port Vila, a charming little town. It sits on a beautiful cove and is surrounded by exotic rainforests. Having just written this, I have no idea what exotic is supposed to be mean in the context of flora, but there we go. 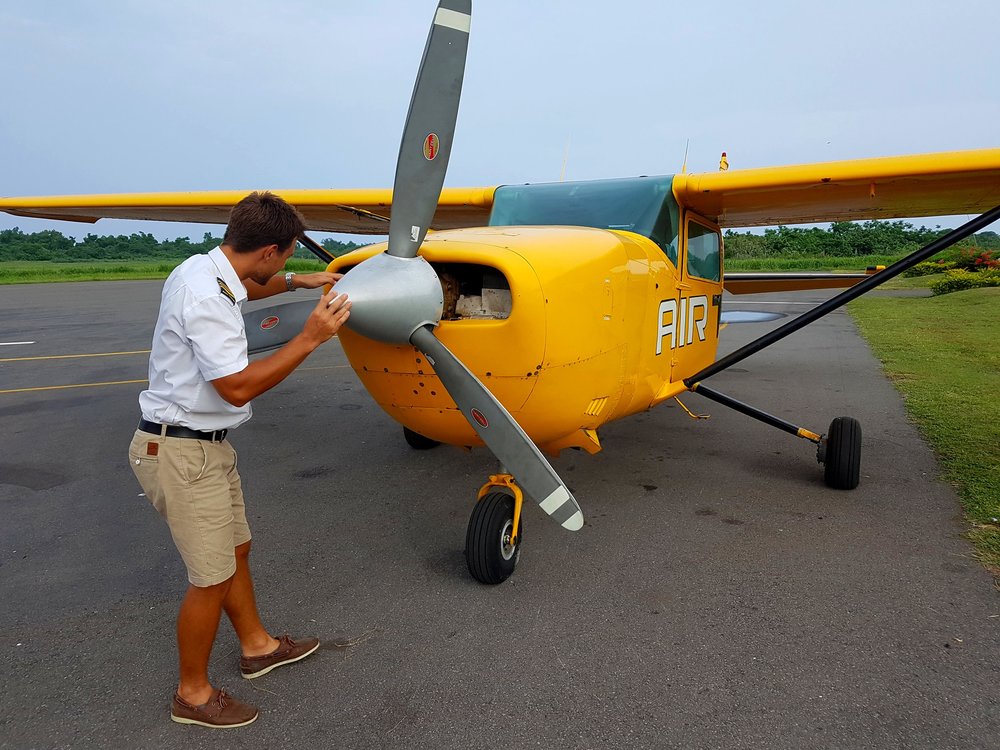 All Aboard The Yellow Toy Plane

Having been duly warned about natural disasters in Vanuatu, I paid a stranger some money to fly me to an erupting volcano. As you can imagine, I rest assured that health and safety in the Pacific Islands are words that probably don’t even have a local translation. But I hopped on a tiny yellow plane, which the pilot cheerily informed us was “built using technology that hasn’t really changed since WW1”. How reassuring. He also looked about 14 years old. I crossed my fingers. I was quite keen to not die on the flight (despite the volcanic final destination being in reality much more dangerous). 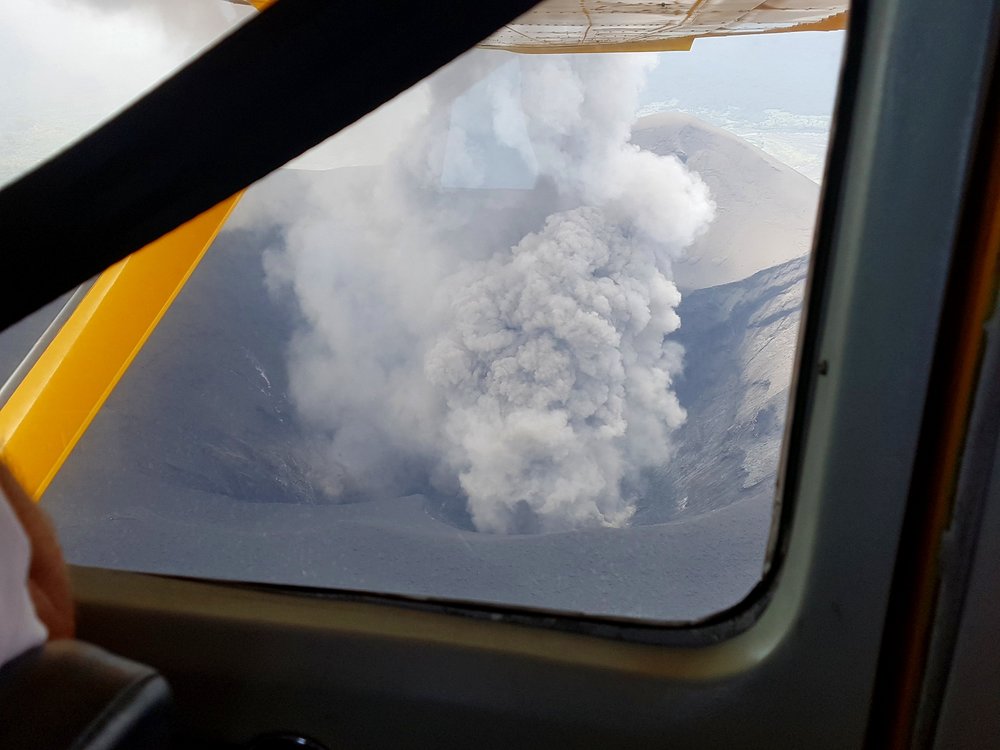 I’m pretty sure that all flights in Europe were grounded when Eyjafjallajökull volcano erupted in Iceland in 2010. It turns out that flying directly over a volcano is fine in Vanuatu. 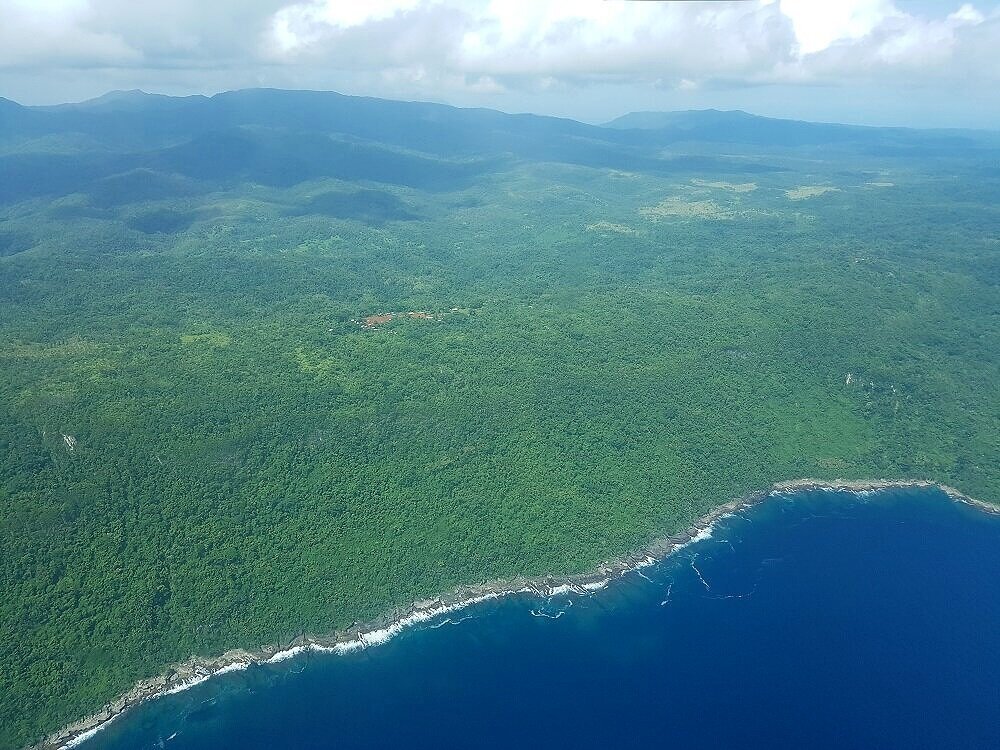 Mt Yasur, as it’s known (and is called), has been erupting constantly for thousands of years. It’s one of the longest continually erupting volcanoes in the world. I was expecting a pathetic little hill with a bit of steam coming out of the top. When I reached the summit and peered down into the crater, what I was greeted with could not have been more different. 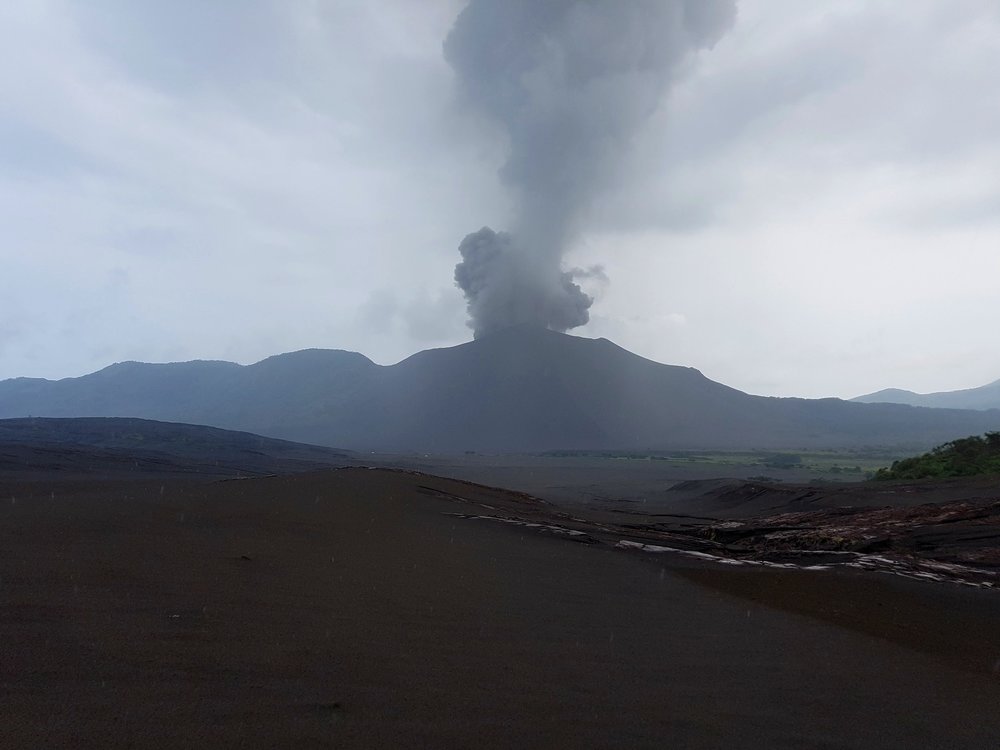 We tend not to drive directly towards scenes like this in Vanuatu, and for good reason. Mt Yasur.

The noise was deafening, like the loudest thunder you can imagine. Ash clouds shot high into the sky. The naked force of the eruptions were unlike anything I had witnessed before, so I don’t have an acceptable simile I can use at the end of this sentence. Bright orange magma burst into the sky, with molten lumps being thrown hundreds of feet into the air. 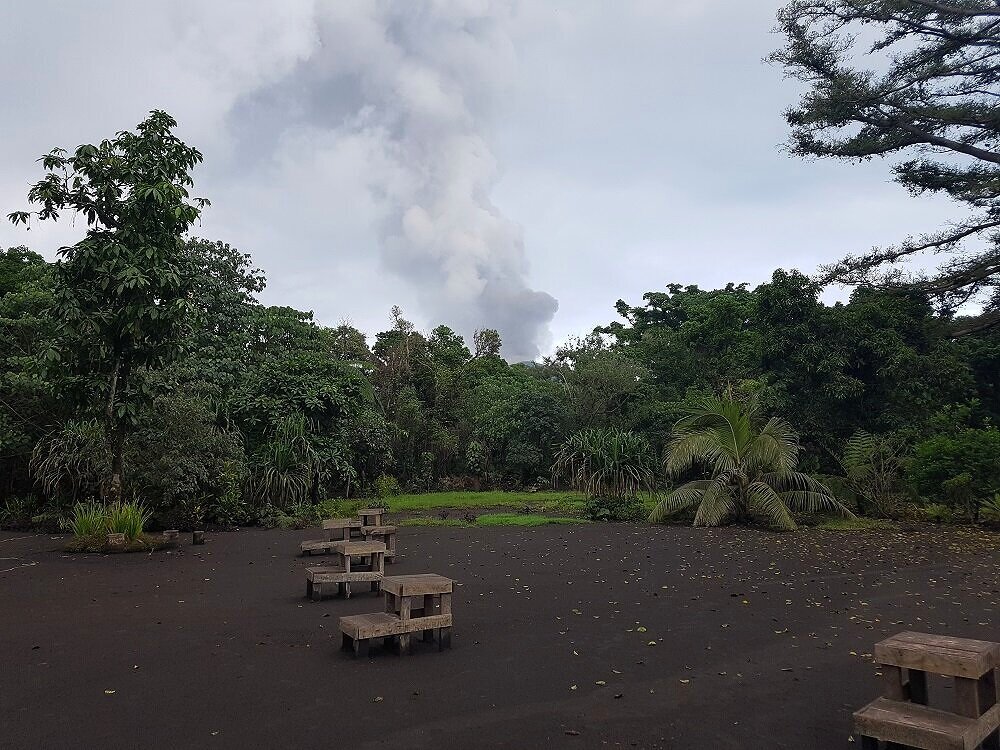 The fumes from Mt Yasur get ever closer.

Mt Yasur is without doubt the most impressive natural wonder I have ever seen. I think it’s the best sight I have ever witnessed, for that matter. Period. Particularly as it got dark, and all you could see was gurgling magma flying into the sky, I thought it really would be hard to top this. I also thought that some of the lumps of magma were landing only a hundred feet away or so from where we were standing. All we were armed with were plastic safety goggles, given to us by park rangers with no sense of irony. 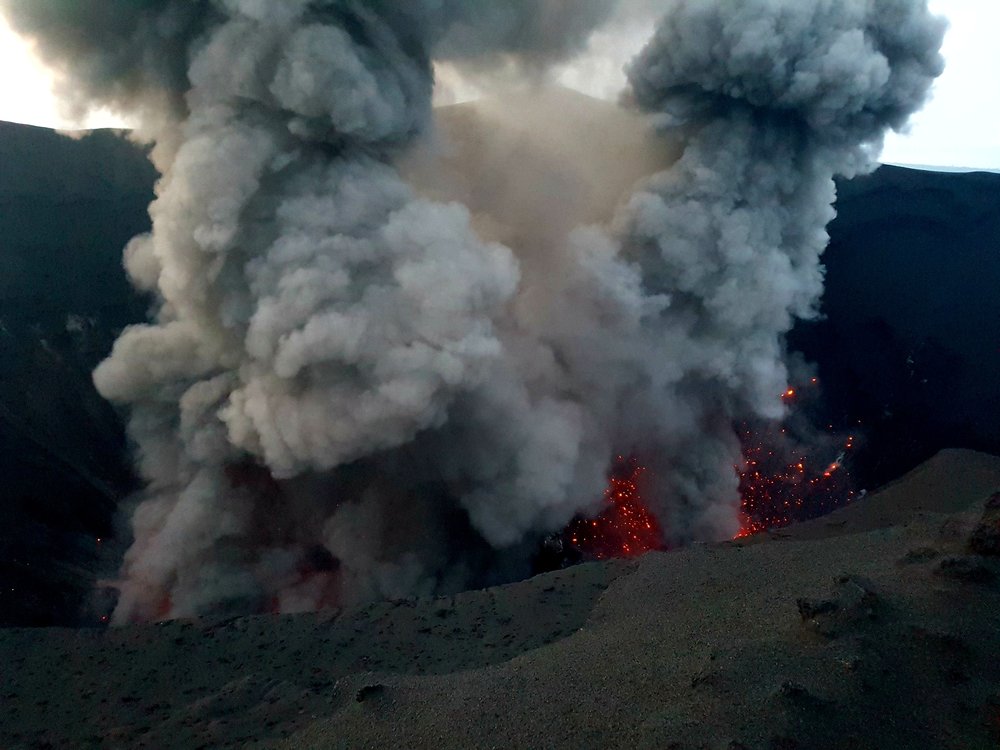 On reflection, it’s quite alarming that we are all basically standing on this stuff the whole time. We live on a rock with a boiling core expending vast amounts of explosive energy, hurtling through space at around 65,000 miles an hour, protected only by a thin slither of ‘atmosphere’. I’m going to go and check the football results. 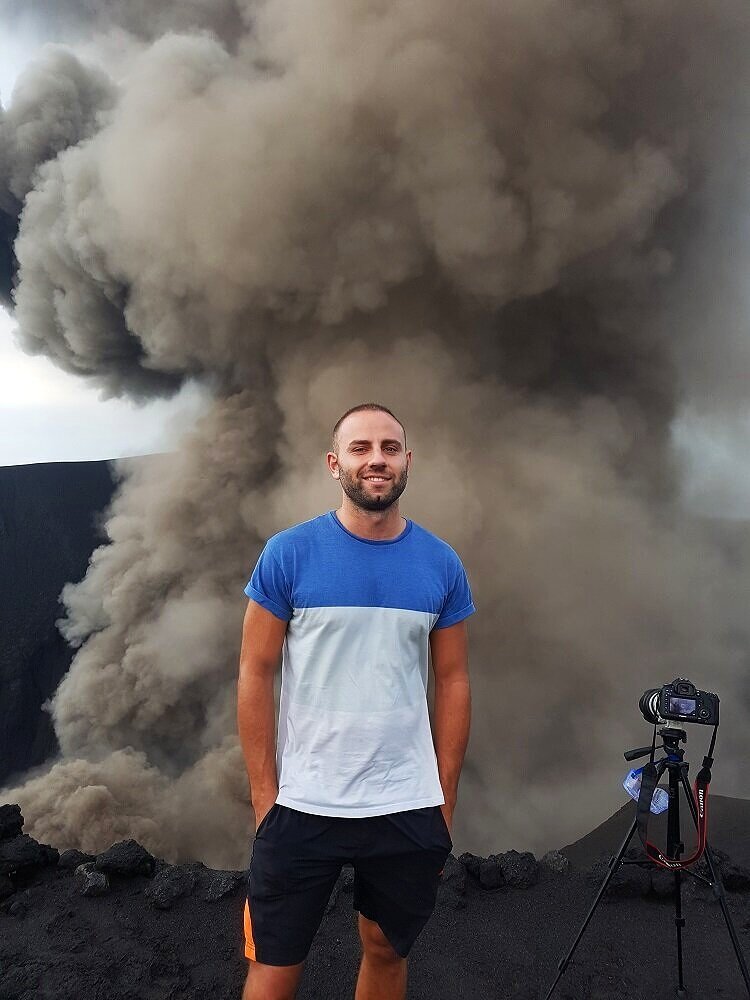 Doing my best to pretend not to be terrified, hence the casual hands in pockets. With Mt Yasur looming behind.

As Diverse As It Is Dangerous

I didn’t die, which is as self-evident to you as it is pleasing for me. The small island where the volcano is located, was also fascinating. Tanna has just 12,000 people. 12 languages are spoken here. I mulled this over. Our driver told me he couldn’t communicate with nearly 90% of the people on this tiny island. As romantic as it is to have all of these dialects, it probably would make sense to whittle some of these down just a bit.

But as I came to learn, this remains one of the most untouched islands in the Pacific Ocean and life hasn’t changed much in many years. Most live in small tribes, in basic accommodation, and within societies governed by village chiefs. I suppose we in the UK are still governed by a chief in a way. But while the chiefs of Tanna are preoccupied with distributing food and settling village disputes, our national chief is mainly preoccupied with being a jingoistic pain in the backside.