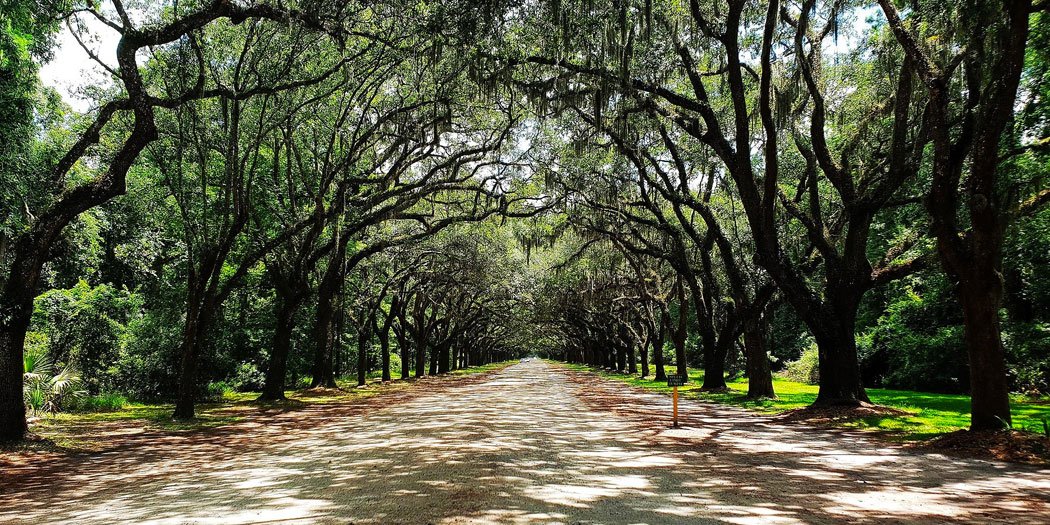 USA – A Sweaty Sojourn Through The Deep South

Country #5. I love America. Ignore the politics, as hard as it may be. If I could only visit one nation ever again, it would be America, by a mile. Surprising? Nowhere else on earth has as many awe-inspiring metropolises. New York and San Francisco are just the tip of the iceberg. Few nations have as much natural beauty, and certainly none have as many fantastic national parks. Add this to the relative ease of travel here, and you have one of the most complete travel destinations on the planet. It also helps that if you have an English accent, you are often treated like a member of the royal family here. I’ve been to the US around 15 times and have visited over 40 states. While I clearly took no pleasure at all boasting about this fact just then, it’s testament for my love for this country. 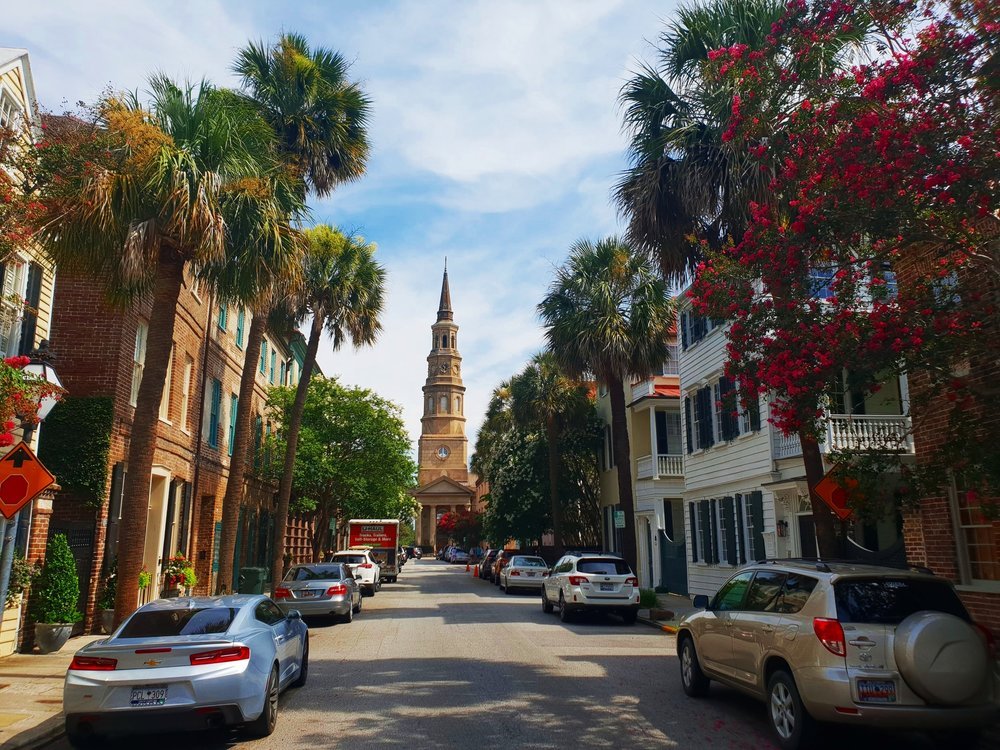 The beautiful streets of Charleston. It’s not an illusion, St Phillip’s Church leans to the right.

I felt the need to add this gushing preamble to justify my decision to visit the Deep South. Most people I told smugly felt the need to remind me that America is ‘bad’ when I did. My road trip is shown in the screenshot below. It took me from Charleston, to Savannah, through Alabama before finishing in Nashville. It was fantastic. I was amazed at some of the historical architecture on show, and the warmness of the local people. And their personalities were warm too (it’s really hot here). For a trip into the heart of America and into the history of this “tremendous” nation, look no further than a jaunt into Trumpland. 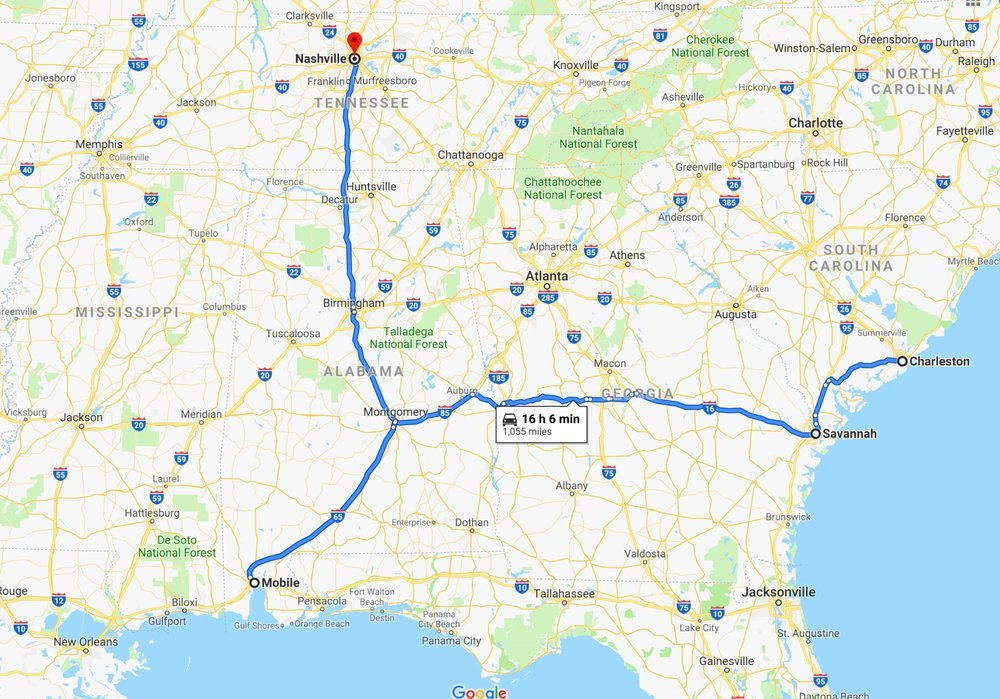 The quickest route to Nashville was to drive three hours in the wrong direction to Mobile, Alabama.

Charleston – An Old American Town. With Some Actual Old Buildings

Charming, charismatic, and compelling. Charleston is a town ideally positioned to be described by someone who uses alliteration far too freely. ‘Charles-Towne’ was formed by the British in 1670 and named in honour of the country’s king. While there are seven other towns in the US with the same name, this Charleston is highly unique. The exquisitely picturesque streets house buildings well over 300 years old. In most American towns, there are few buildings even half this age. 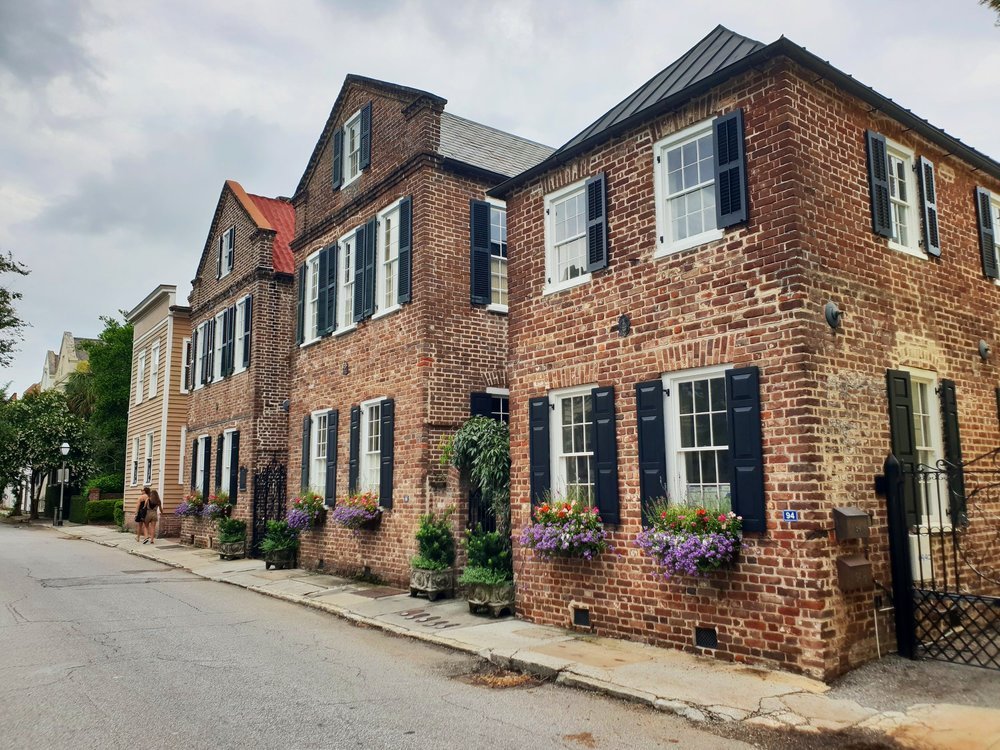 Even the weather looked English in this picture.

The beautiful British architecture has been respectfully maintained. At times, you could be forgiven for thinking you were actually in the UK. Save for the unrelenting humidity, as well as (huge generalisation here) Americans’ often wanting fashion sense. Think oversized golf shirts, colossal khaki cargo shorts, matched with luminously white clumpy tennis trainers. It’s a sight to behold. One local I saw went further. He proudly wore a custom t-shirt with the slogan “Two reasons I love being a daddy: Charlotte and Vivienne”. Aside from handing around flyers saying “I have children – how incredible!”, he could not have done more to highlight this impressive fact. To be fair, only 90 billion humans have ever been born, so it is quite the feat. 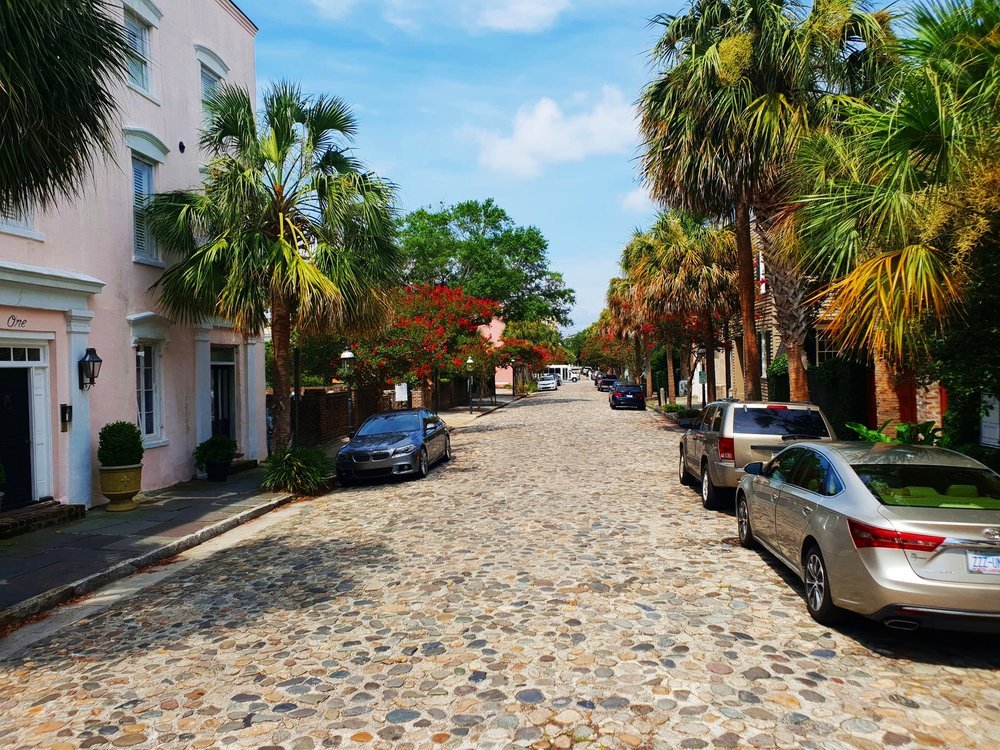 Cobbled streets are common in Charleston. These stones came all the way from Newcastle, England.

Before anyone accuses me of unfairly criticising proud parents and people with a poor fashion sense, just remember that I exaggerate some of the things I write for comedic effect. And if you’re still offended, well, you have the right to be offended. It would be remiss of me not to talk about the rest of my time in Charleston. The compact town is easy to walk around. A weekend is long enough to explore its charming streets and restaurants. Particularly picturesque strolls include the colourful Rainbow Row, the Historic City Market, and taking in the beautiful mansions on the southern tip of the Charleston Peninsula. 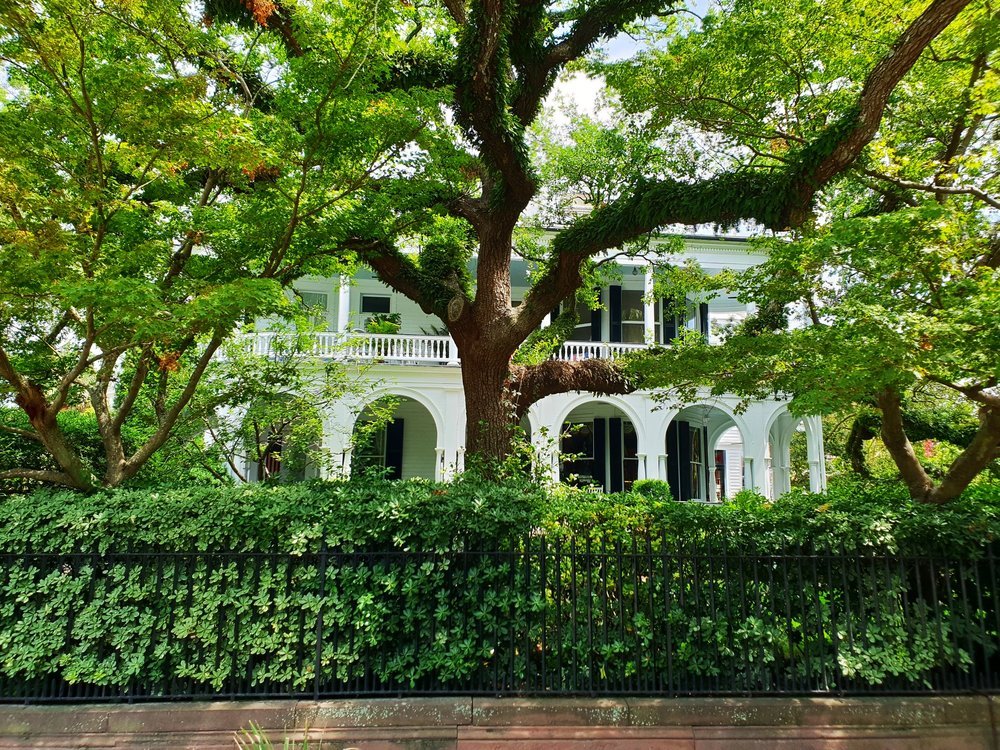 One of Charleston’s many beautiful mansions. This one is nicknamed the ‘White House’. It looks a bit like its namesake in Washington DC, which somewhat ironically is currently occupied by a man who appears to be doing his best to make America the same colour, whatever the cost.

Charleston also has the highest-rated restaurants per capita in the US and, seemingly, the highest proportion of hen dos anywhere in the country (bar Nashville, more on this later). In the US, they call hen dos ‘bachelorette parties’. In a conversation with a local Charlestonian, it appeared to her that I was moaning quite openly about the city “being overrun by Hindus”. I became increasingly puzzled as to why she looked so offended by my comment on pre-marital gatherings of a bride and her friends, before realising that with my accent, she misheard me. Some things get lost in translation. 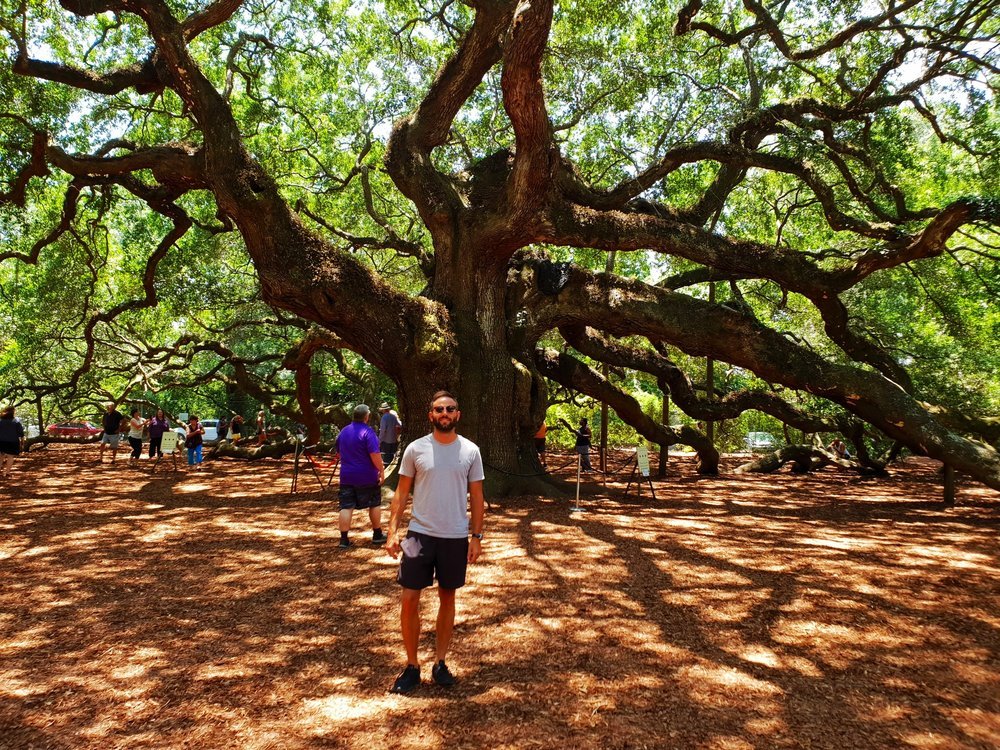 This is the oldest tree in America, allegedly. I have no idea what’s going on in my pocket in this picture, but presume it’s a ghost. I was quite rude about some of the ‘Ghost Tours’ on offer in Charleston, and clearly the spirits are making themselves known in this photo.

Onto Georgia. The Georgia in America, not the ex-Soviet state of the same name, I hasten to add. Beautiful Savannah took me by surprise. It’s as pretty as Charleston, perhaps even more so with its tree-lined boulevards and stately homes. Savannah was established in 1733 and was planned around 22 parkland squares. One of them houses the bench in the film Forrest Gump, where he tells his, in retrospect, highly implausible life story. 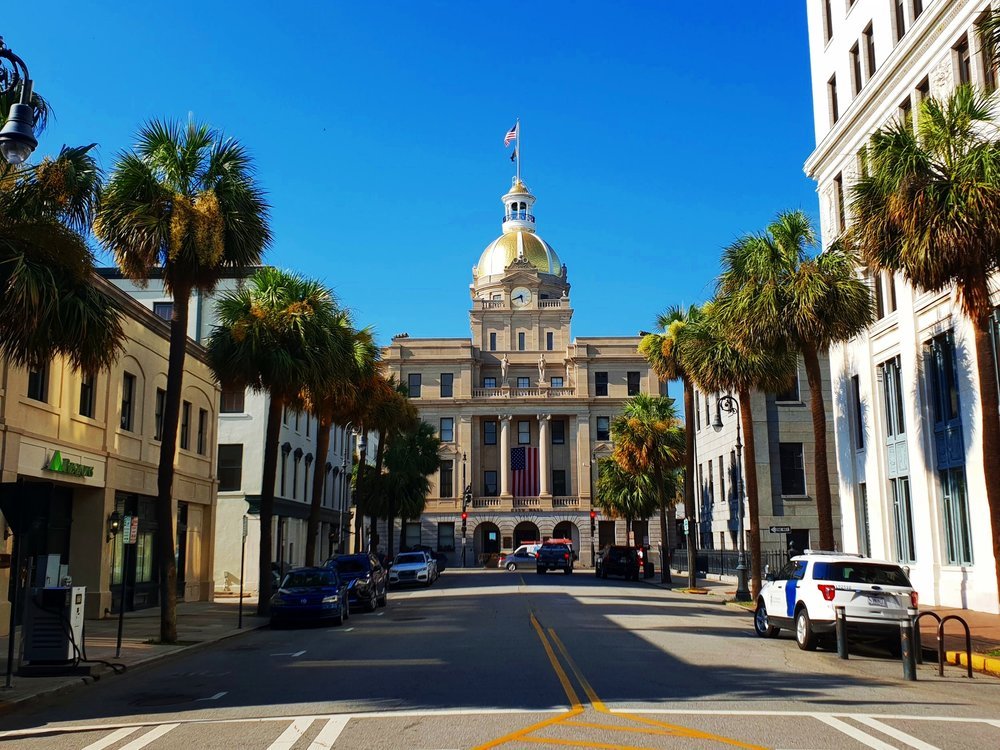 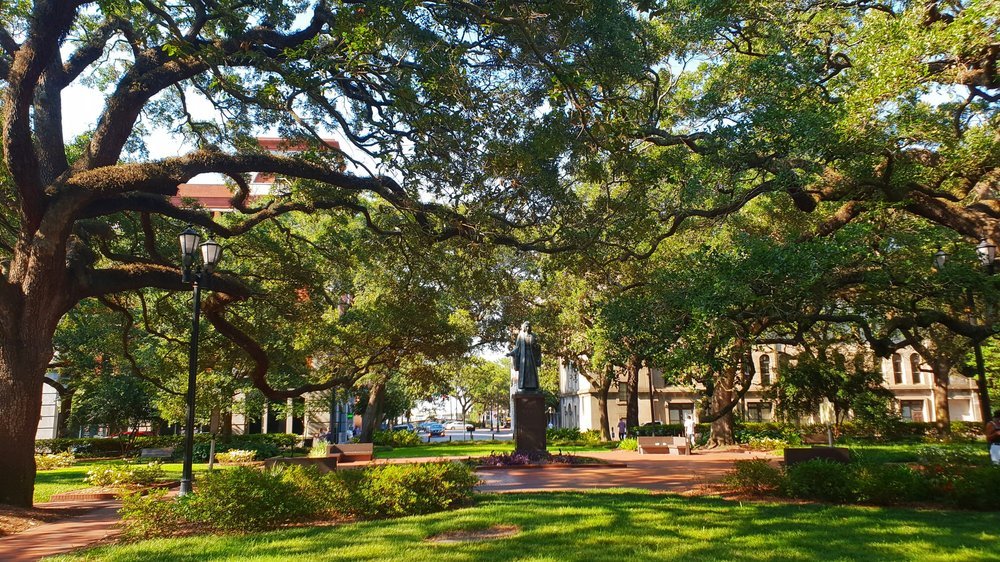 One of the city’s many beautiful squares. These are mainly filled with sculptures of men who did very bad things hundreds of years ago.

With a similar feel to Edinburgh’s New Town or Kensington in London, strolling around the city’s beautiful streets is a must. Any visit to Savannah is also incomplete without a visit to one of the city’s plantations. Wormsloe Historic Park is a perfect example of this. Its grand, tree-lined boulevard is one of the most picturesque parts of the city. A testament, as with so many global monuments, to untold human suffering. Like in so many comparable plantations, slavery was the main method used for Wormsloe to turn a profit. 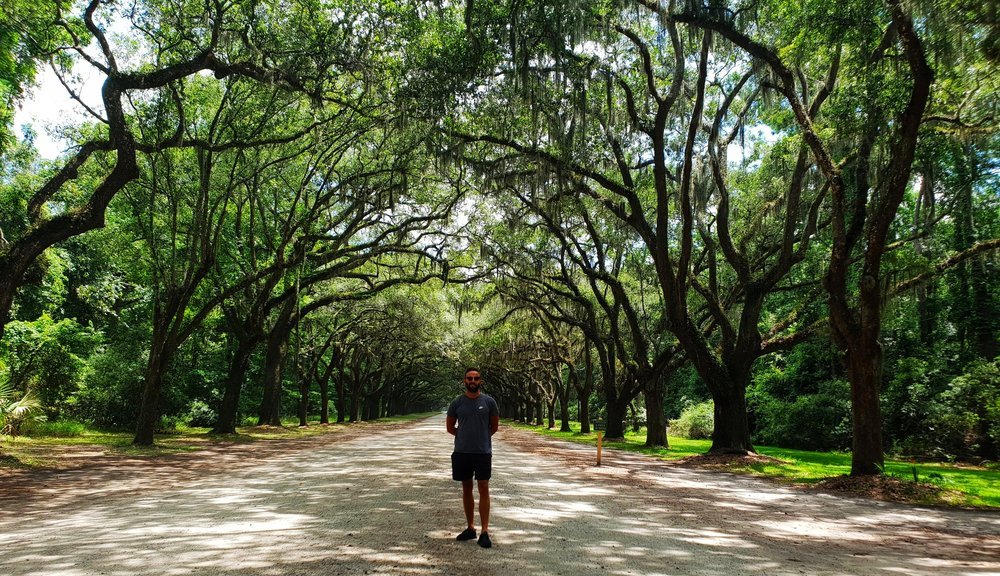 Wormsloe Historic Park, Savannah. My narcissistic desire to include myself in the photo has essentially ruined the entire composition of it, by blocking the illusion of the road continuing infinitely into the distance. But I’m not changing it.

A hurricane, for the second time in a decade, foiled my attempts to visit New Orleans. So I headed for Nashville instead. Not before a minor ten-hour detour to Mobile, Alabama. Aside from some lovely French architecture, I wouldn’t say it was necessarily worth the round trip. Mobile is pronounced ‘Mo-Beel’, and not like a mobile phone. To many, this was a source of untold amusement. This mix up, tellingly, was one of the highlights of my visit. 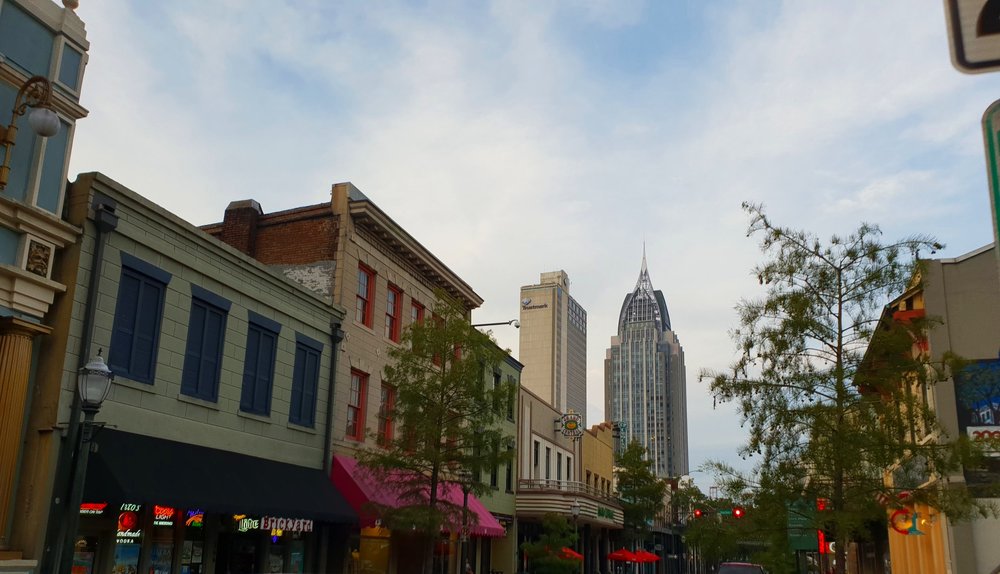 Mobile, Alabama. Like a miniature New Orleans, but also clearly not New Orleans. I’m not bitter.

Alabama is the heart of the Deep South. It’s the most patriotic state I’ve been to in the US. Even the roads love America. One motorway is called ‘Heroes Highway’. A further is called ‘War On Terror Highway’, notable for costing billions and resulting in a huge unnecessary loss of life. The road was also expensive (to be sure, that was a play on words about the Iraq war being a disaster). It’s worth spending a day in Montgomery, the state’s capital, and Birmingham, which both played a central role in the history of the civil rights movement. 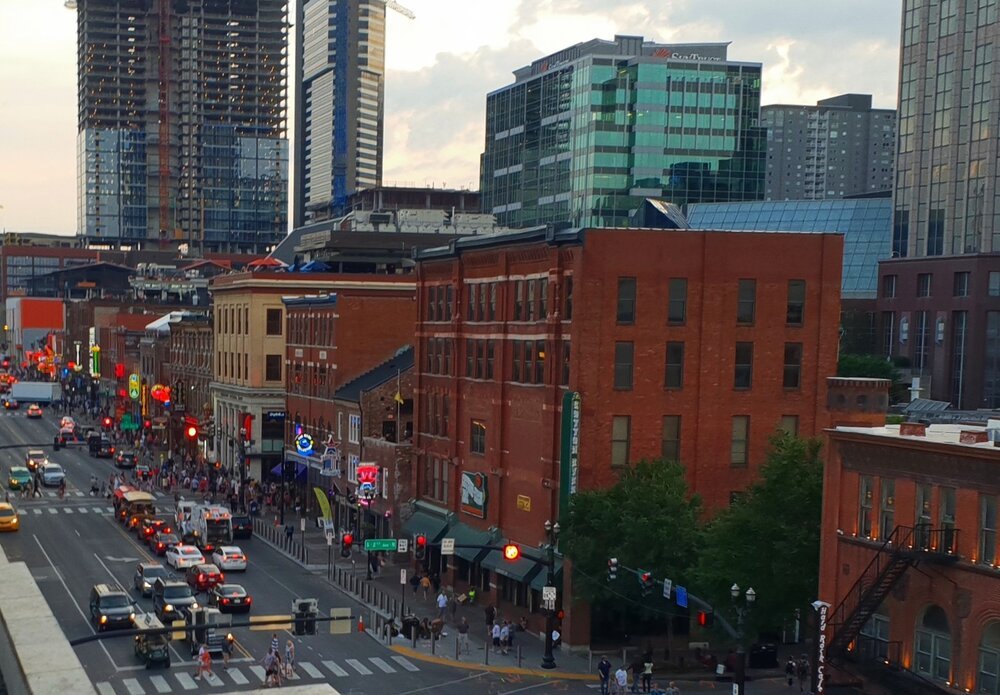 Broadway Street, Nashville. A hot, sweaty, mess. Less than 10% of people in this photo are not on a bachelor or bachelorette party, and also not from New Jersey.

Nashville is one of the liveliest cities in the US. People come from all over to party. I think I was one of few visitors not here on a stag or hen do. Nashville is mainly famous for its love of country music, which is not to everyone’s taste, and certainly not mine. Nashville’s ‘Music City’ nickname makes no claims about the quality of the music on offer, to be fair. It’s absolutely unavoidable at any bar or restaurant. The city has changed beyond all recognition since my last visit, in 2011. Once relatively subdued, Nashville has spawned into a miniature Las Vegas, at least on the wild, neon-covered Broadway Street in the centre of the action. 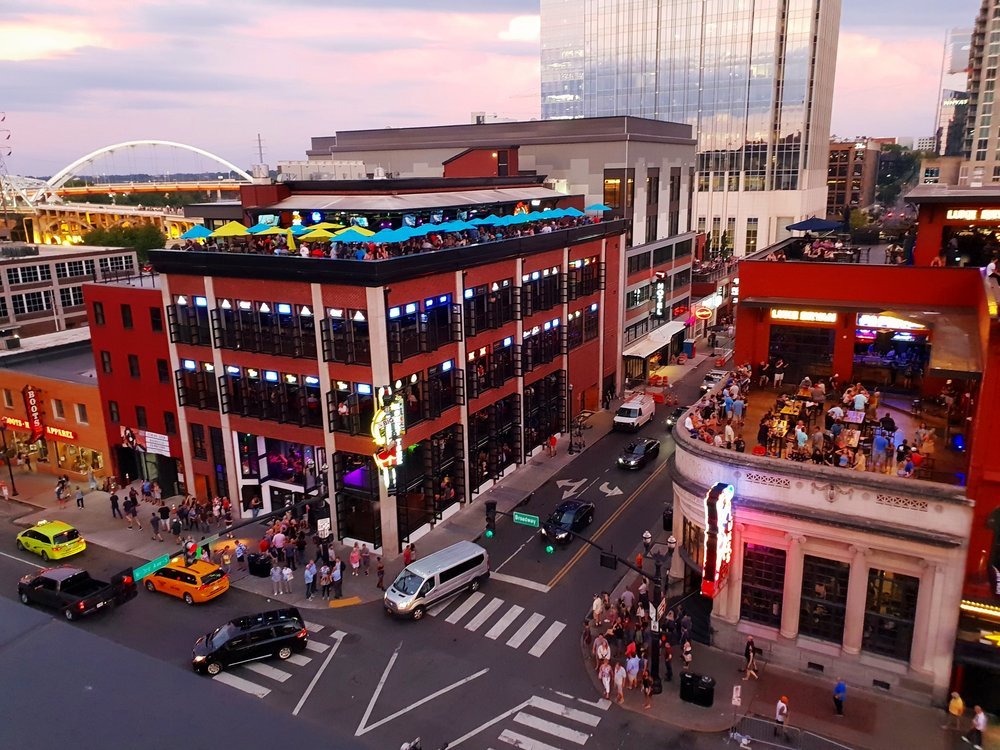 One of Broadway’s many rooftop bars. Rumour has it that Kings of Leon, who hail from Nashville, played none of these bars and avoid the street at all costs.

Nashville is still charming if you leave the touristy centre. As a ‘traveller’, I rightly fail to include myself in the tourist camp, for no good reason apart from an entrenched superiority complex which most who travel have. Walking along the Cumberland River is a must, bordered by charming industrial architecture and impressive steel bridges. A trip to the Jack Daniels’ Distillery in Lynchburg is also a great day out, and is much more authentic in feel than the Heineken ‘Experience’ in Amsterdam. 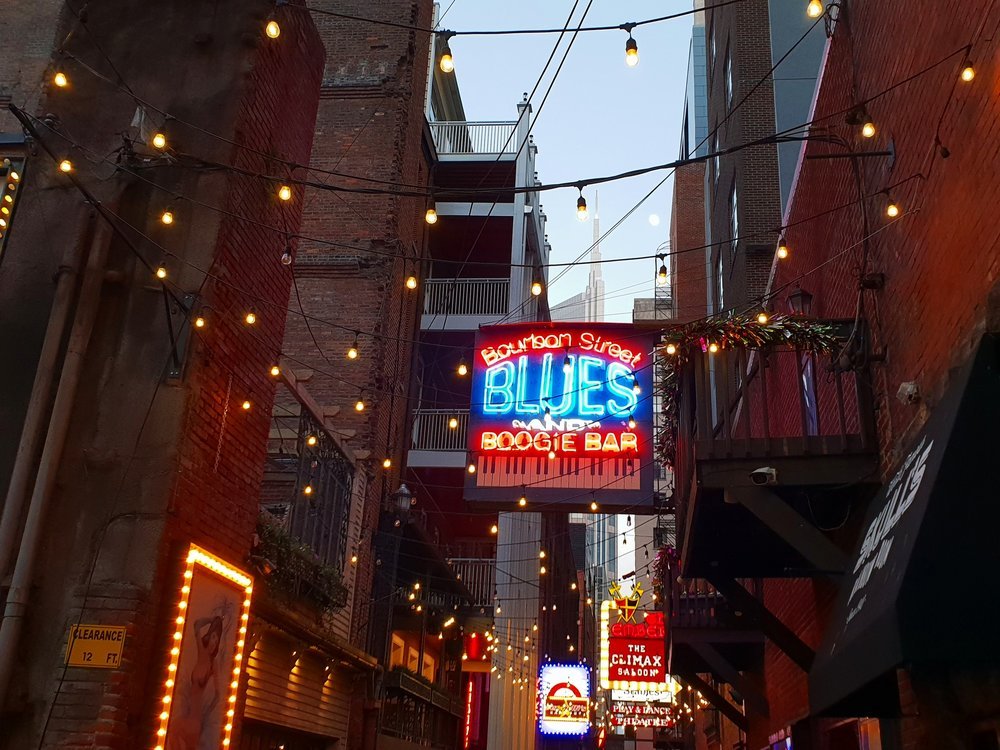 An undiscovered backstreet in Nashville, with the hordes of tourists stood on the street below cleverly cropped out of the photo.

Head to East Nashville, and you also get a sense of what Nashville used to be like in years gone by. It has low-key bars and even a slight hipster vibe. The previous night on Broadway, I witnessed a packed bar sing along to a song called Courtesy Of The Red White And Blue by Toby Keith, played against the backdrop of American war heroes and fighter jets. Have a look at the link to the right. Marvel that this is an actual song. It is not state-sponsored propaganda. East Nashville offered brief respite from the non-stop patriotism that greets you in this part of the world. That said, America probably is the best. So, like Cristiano Ronaldo or Muhammad Ali, maybe it’s fine for everyone to shout about it if it’s true.

Next Post: Portland, USA – America’s Greatest City? Almost Certainly, If You Are A Millennial