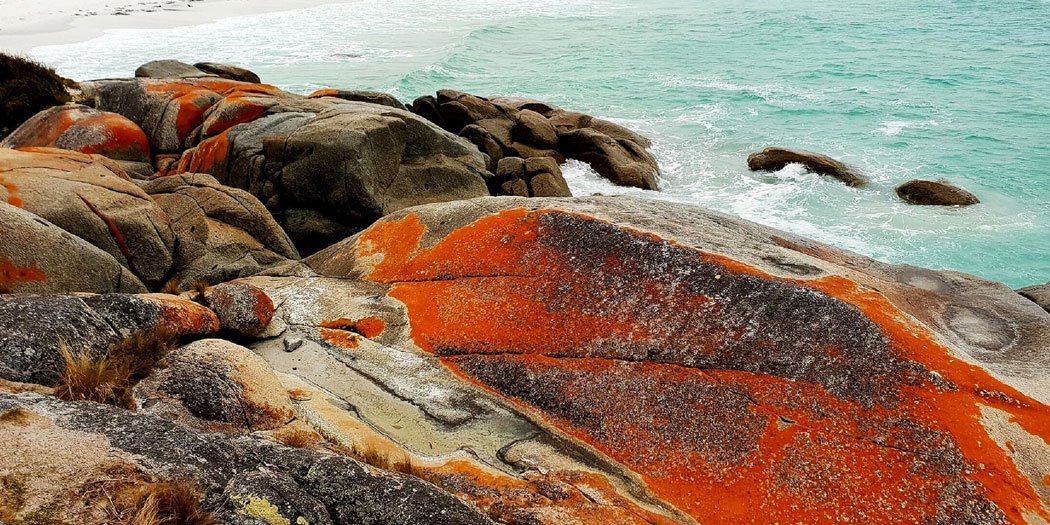 Tasmania – Rugged And Remote Landscapes On The Edge Of The World

Country #41. Tasmania is a tiny and little-known Australian island located 500km south of Melbourne. At least it looks small on a map. But Australia’s huge size distorts your view. Tasmania is the same size as Ireland, with just 500,000 inhabitants (as opposed to Ireland’s 4.5 million). Most ‘Taswegians’ live in the historic and picturesque capital, Hobart. This leaves the rest of this wild island feeling remote and rugged. ‘Tasi’ as it’s affectionately known to Australians – who like to shorten most words by replacing the ending with ‘i’ or ‘o’ – is a true hidden gem. 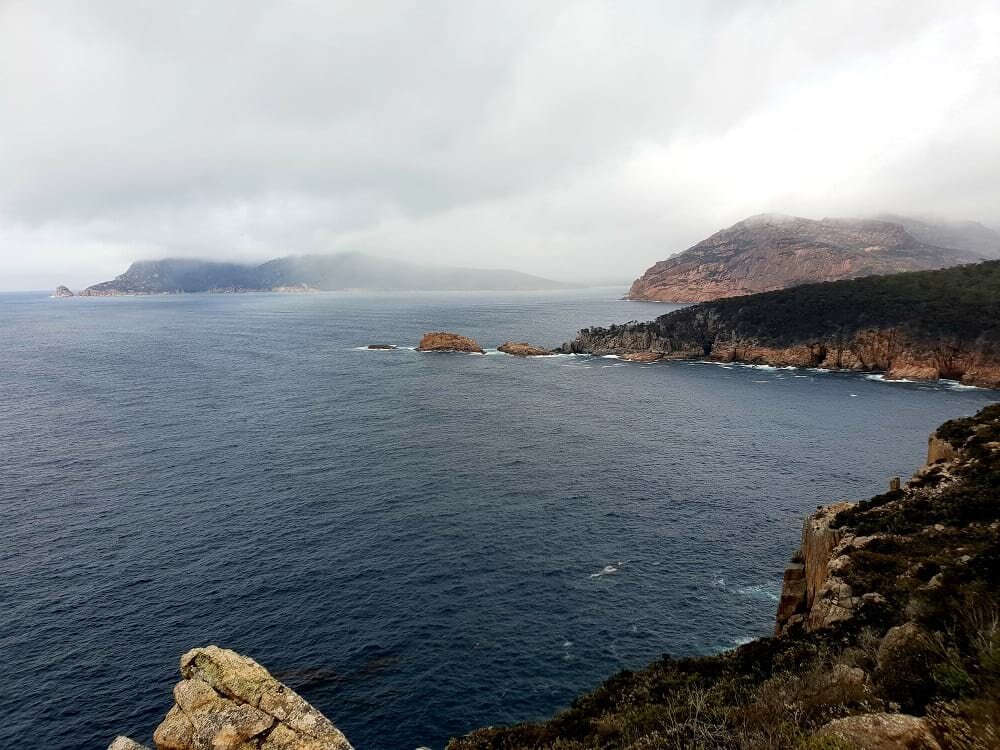 Rugged, dark, and brooding, I felt like a good candidate to visit Tasmania. The coastline happened to be nice when I visited.

Tasi is nothing like the rest of Australia. It’s wet, windy, and green, for starters. If you head directly south, you’ll hit Antarctica eventually. And you certainly feel the arctic winds here, even if you visit in the summer. Dry deserts are replaced with rugged mountains and crystal-clear lakes. The scenery is more akin to Scandinavia than it is to Sydney. 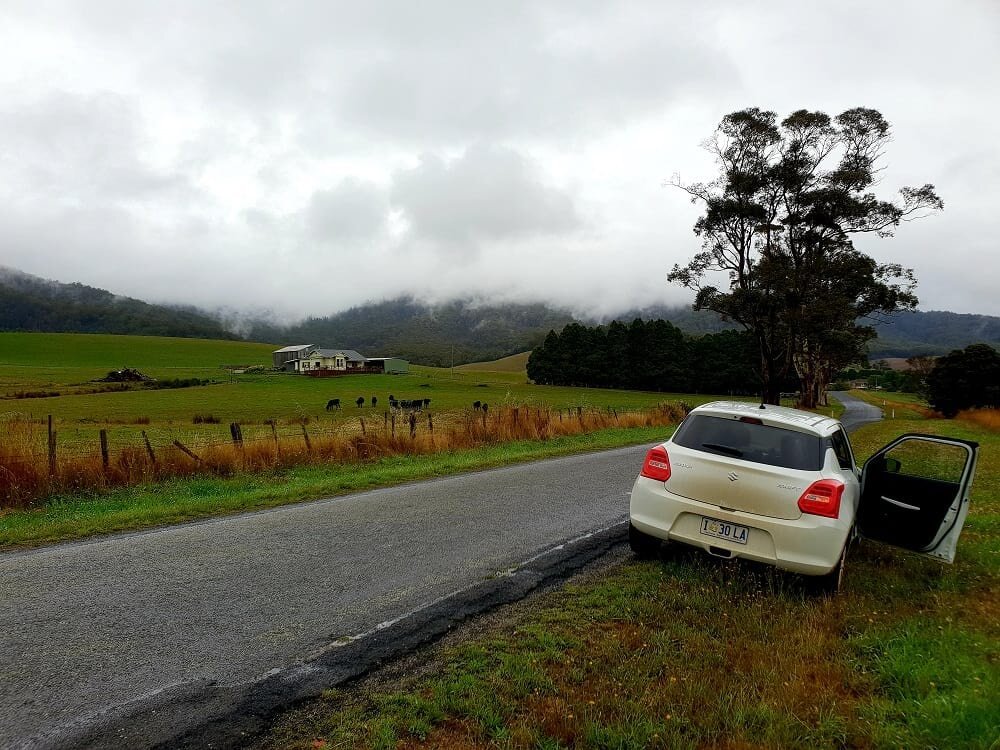 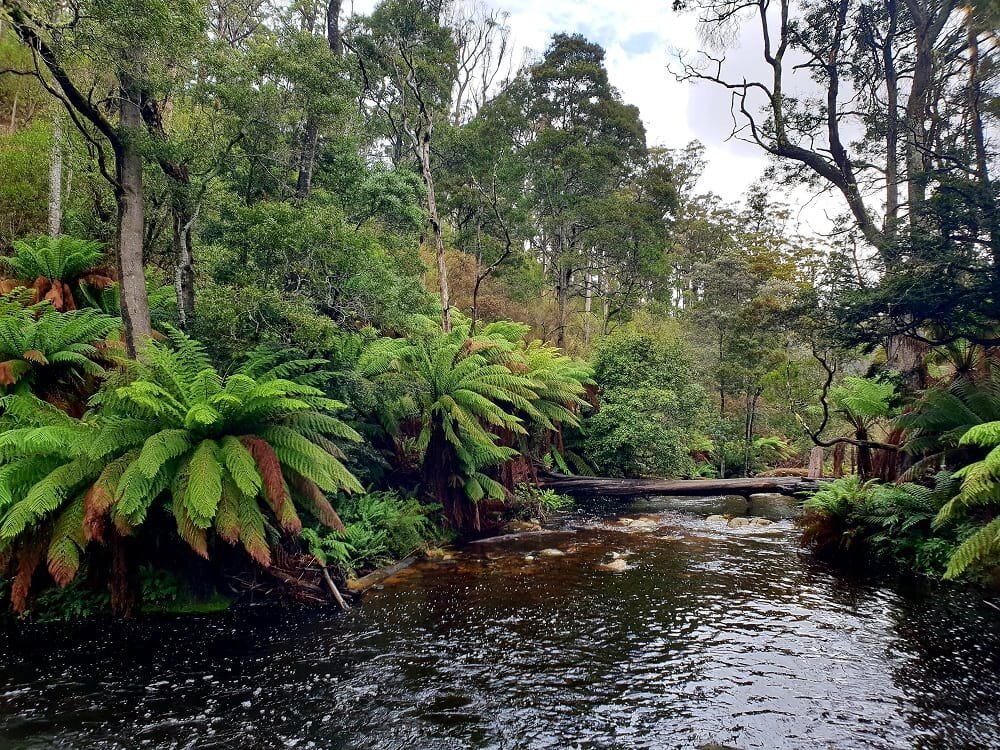 The people are also different. ‘Mainland’ Australians like to jokingly imply that Taswegians are backwards or inbred, because they live on a remote and inward-looking island. With no sense of irony, perhaps not realising that they too live on a remote and inward-looking island. Like Glaswegians, Taswegians are a self-deprecating bunch. And witty, with a dry sense of humour. This personally suits me (because I am those things, I’m gently implying). Certainly, it makes a change from the alpha male ‘laddy’ culture that prevails in Sydney. 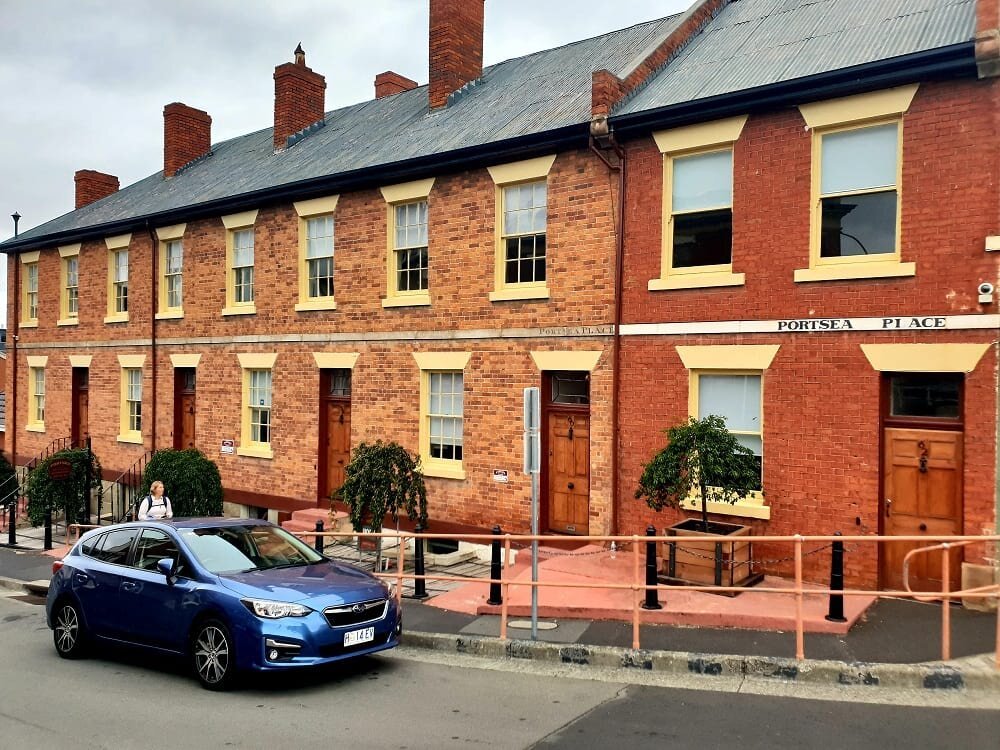 Hobart, Tasmania. The terraced houses reminded me of home, specifically of the many times Coronation Street appeared on my TV and I quickly changed channel.

While this could potentially put people off visiting, Tasmania felt more British to me than Britain at times. With rolling green hills, livestock, and quaint pubs slipping past me as I drove down country lanes, it was hard to believe I had not fallen through a trap door in Sydney airport and popped out on the other side of the world. Hobart has traces of British influence wherever you go, particularly from an architectural perspective. The pub I stayed in literally stank of an outdated English pub. Were I to describe this fragrance, it would be a peculiar stench of damp wood panelling, salt and vinegar crisps, and stale beer. It made me miss home. 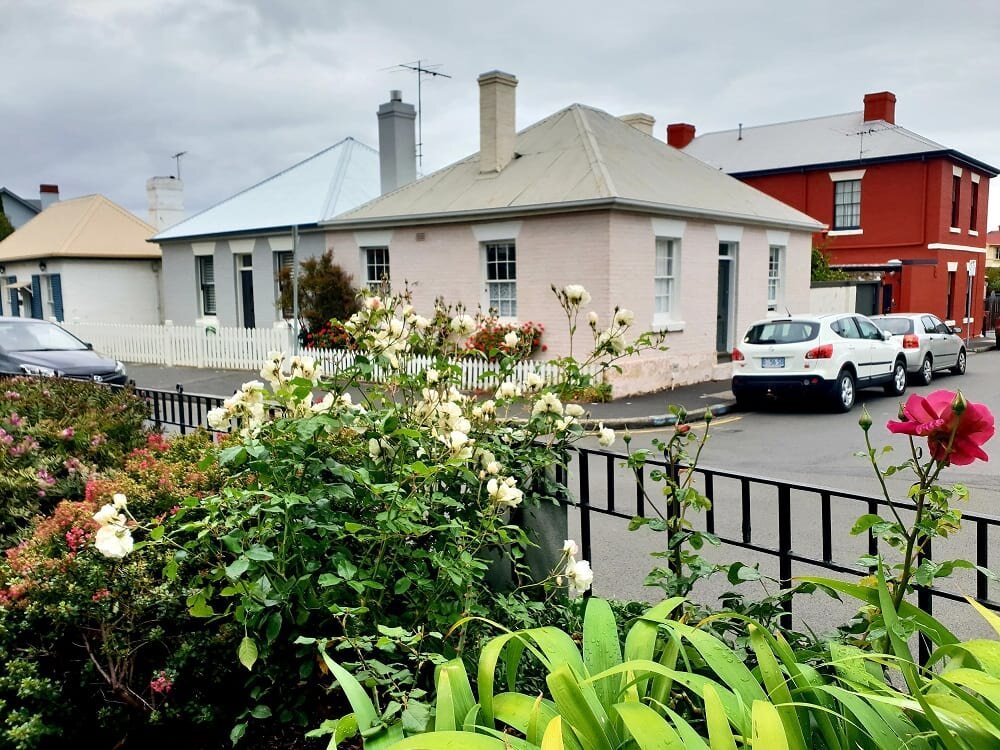 Hobart, which for some reason is extremely pleasing to say out loud, packs a punch for a tiny city of a couple of hundred thousand people. Looming over it is the menacing presence of Mount Wellington, which is taller than and looks similar to Table Mountain in Cape Town. Hobart is also home to the best museum I’ve ever been to. Mainly because the experience felt like I was playing a James Bond computer game. You board a specially designed camouflaged catamaran to the Museum of Old and Modern Art (MONA), with staff dressed in sinister military uniform. Yes, really. 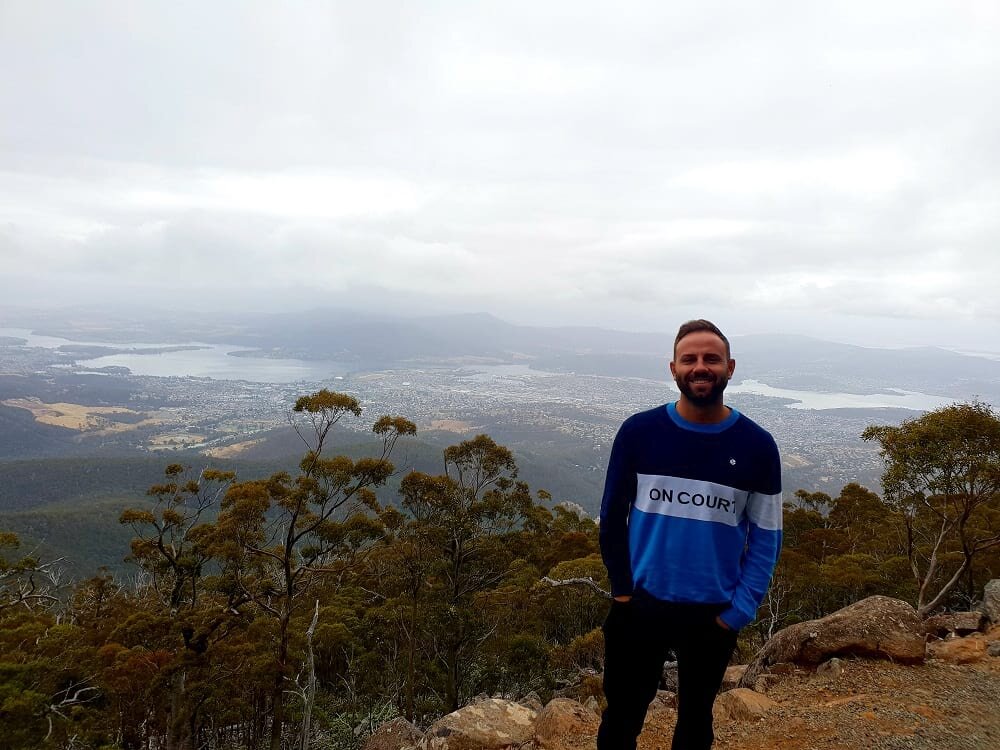 Standing on the summit of Mount Wellington, in Hobart. 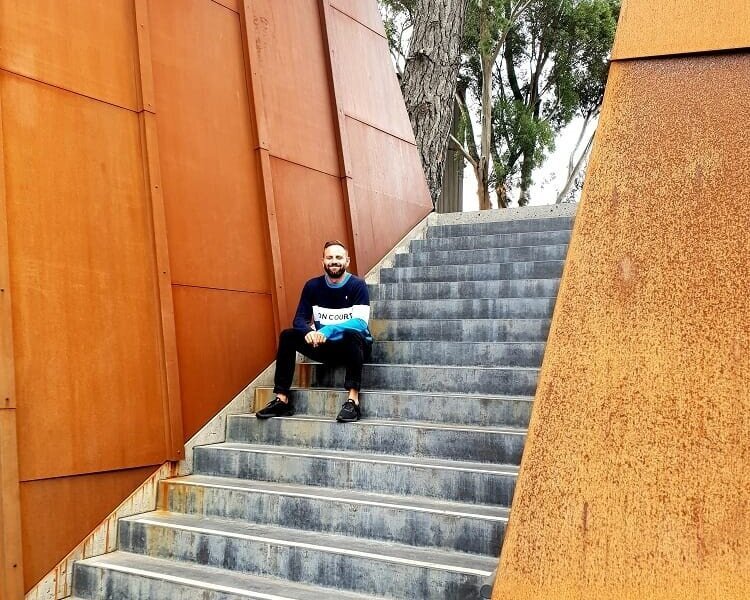 Sat on the steps at the MONA. And happy. I love concrete and rusted copper cladding.

The MONA museum is audacious. A gigantic underground labyrinth of exposed concrete tunnels and caverns, it’s one of the most impressive structures I’ve ever been in. It has regularly been voted the best modern art museum in the world, ahead of the Tate Modern in London. In both cases, I confess that I love the buildings more than the art held within them. 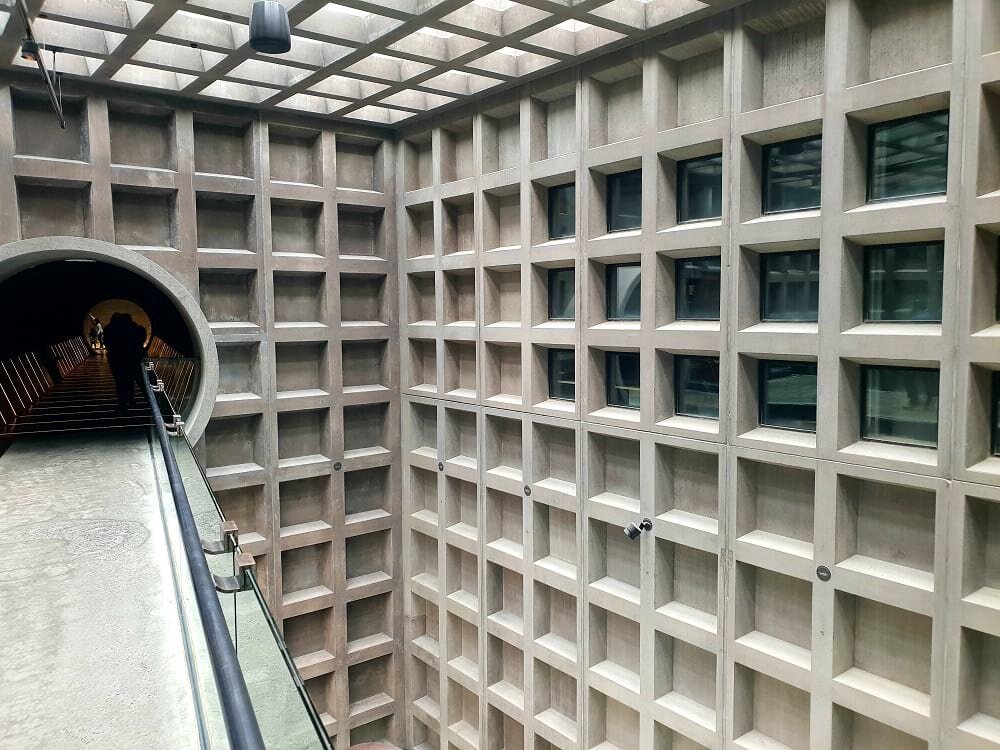 The MONA museum. If you like James Bond and polished concrete, you probably need to get a life. Or visit the MONA in Hobart, as I did.

For example, one of the MONA centrepieces was a tattooed man sat listening to his iPhone. While art critics would probably accuse me of not “getting it”, I would accuse them of having an occupation that is inherently flawed. Critic: “I can’t paint or write world-famous music, but I will spend my life criticising the musical and artistic work of others, as maliciously as possible”. 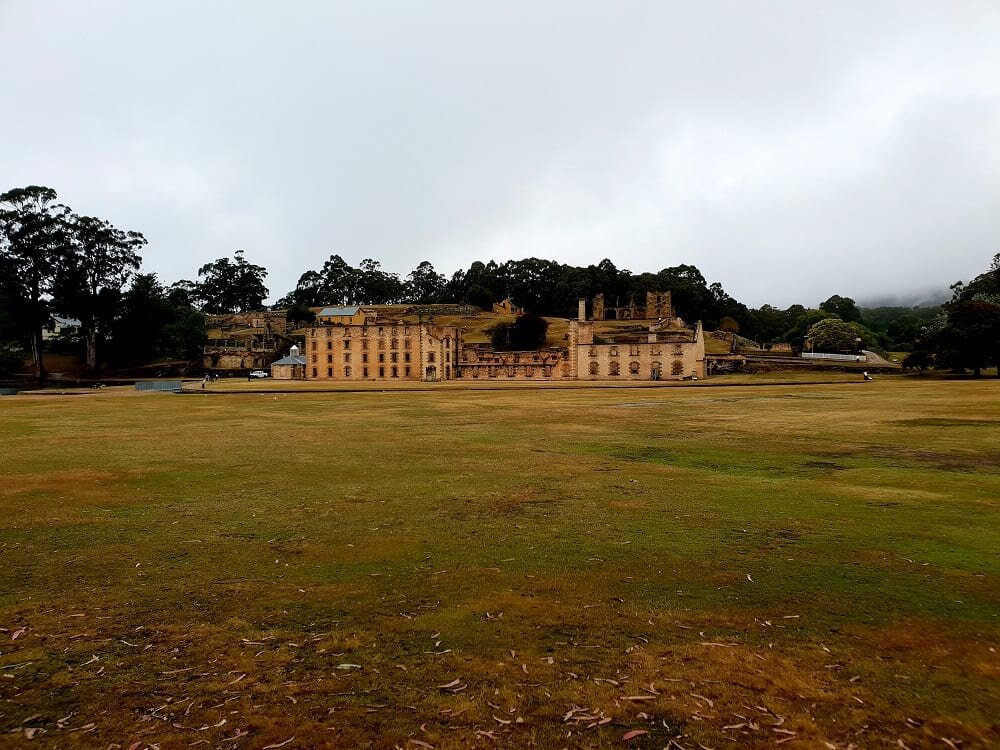 Nature is Tasmania’s main attraction, however. A road trip up the east coast takes you past miles of endless vineyards and empty white sand beaches. It can be done in a few short days. Highlights included: 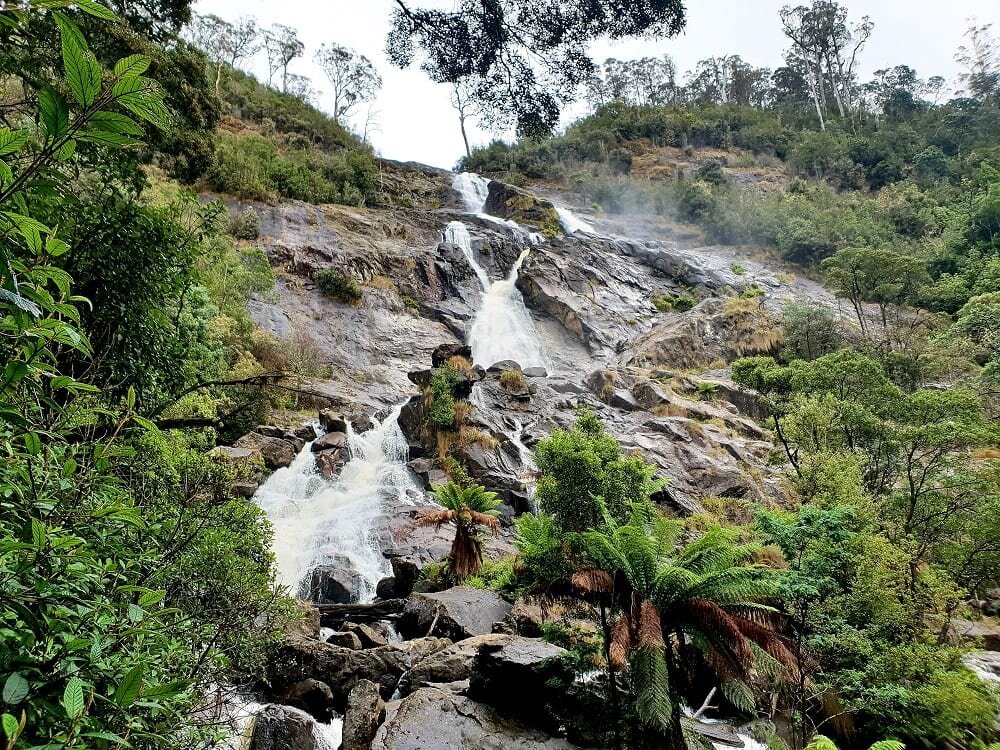 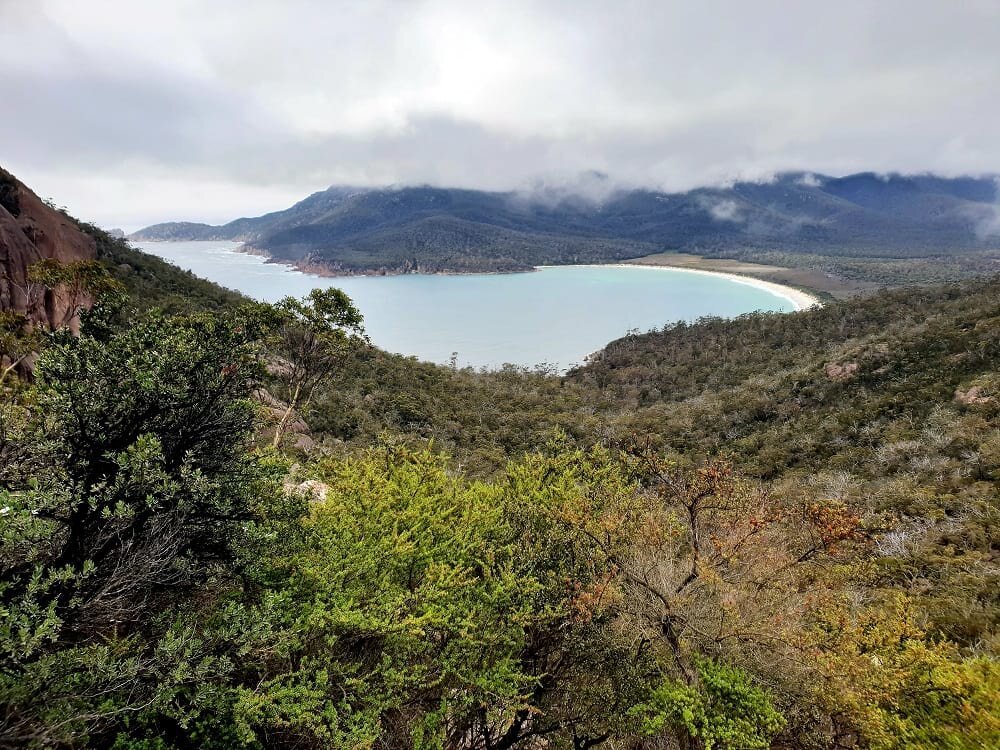 The stunning Wineglass Bay, Tasmania. It’s ranked as one of the world’s top ten beaches.

The endless nature gives you an incredible sense of serenity, or boredom, depending on your disposition. I personally love the nature on offer in the country. Air so clean you can viscerally taste it not giving you cancer, a rare novelty for someone who spends his life crushed into cramped urban areas. I urge you all to visit this undiscovered island. And, like Lonely Planet does, I will then complain in a few years when this ‘hidden gem’ is for some reason overrun with tourists. 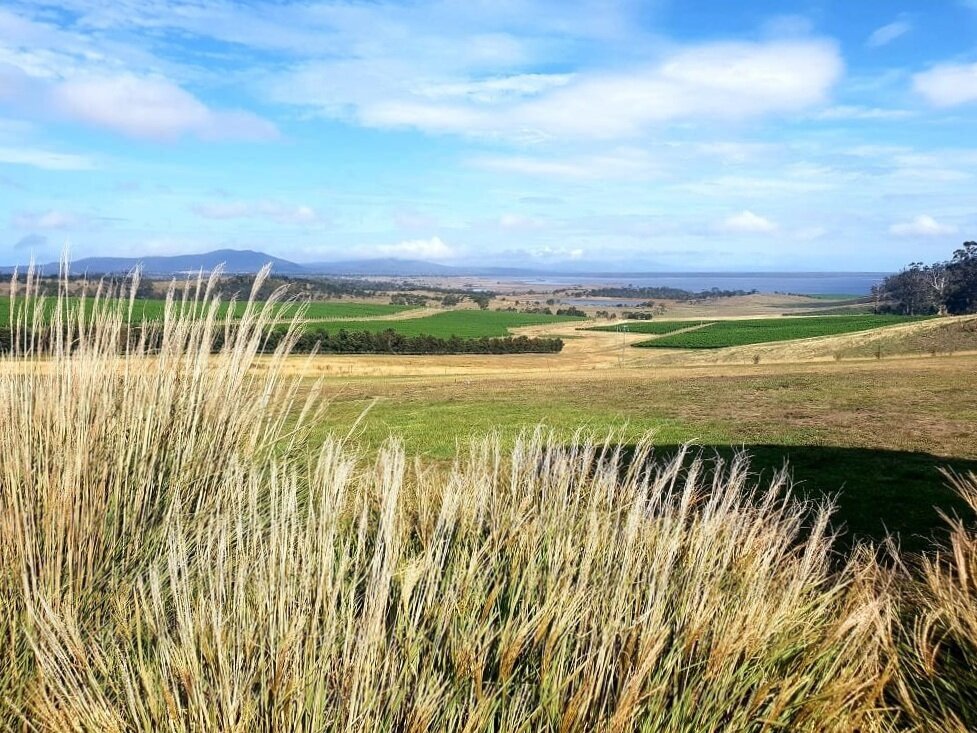 Previous Post: Was The World Really Better In The Past?

Next Post: Palau – A Pristine And Paradisiacal Pacific Island