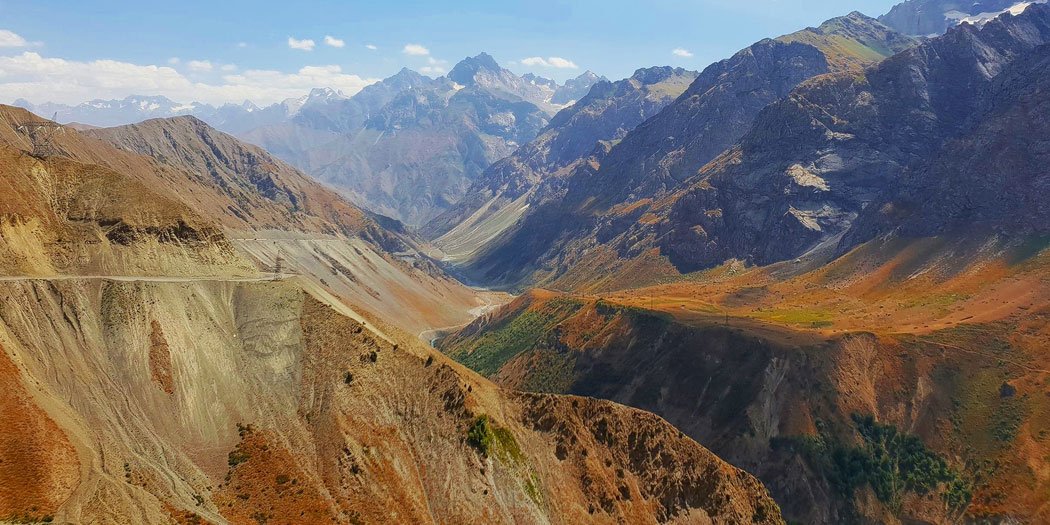 Tajikistan – An Outstanding Week On The Roof Of The World

Country #138. Tajikistan was the final Central Asian country I ‘needed’ to visit. Referred to perhaps lazily by some as the ‘stans’, the five ex-Soviet republics of Turkmenistan, Kazakhstan, Kyrgyzstan, Uzbekistan and Tajikistan are a fascinating mishmash of Eurasian influences. Having visited the first four, I had high hopes for Tajikistan. And even then, the breathtaking, rugged, and mountainous scenery really took me by surprise. 90% of the country is upland. The sheer scale of the mountains, dare I say it, helped Tajikistan stand out among the Central Asian countries. Yes, there was also a pun in the title too. 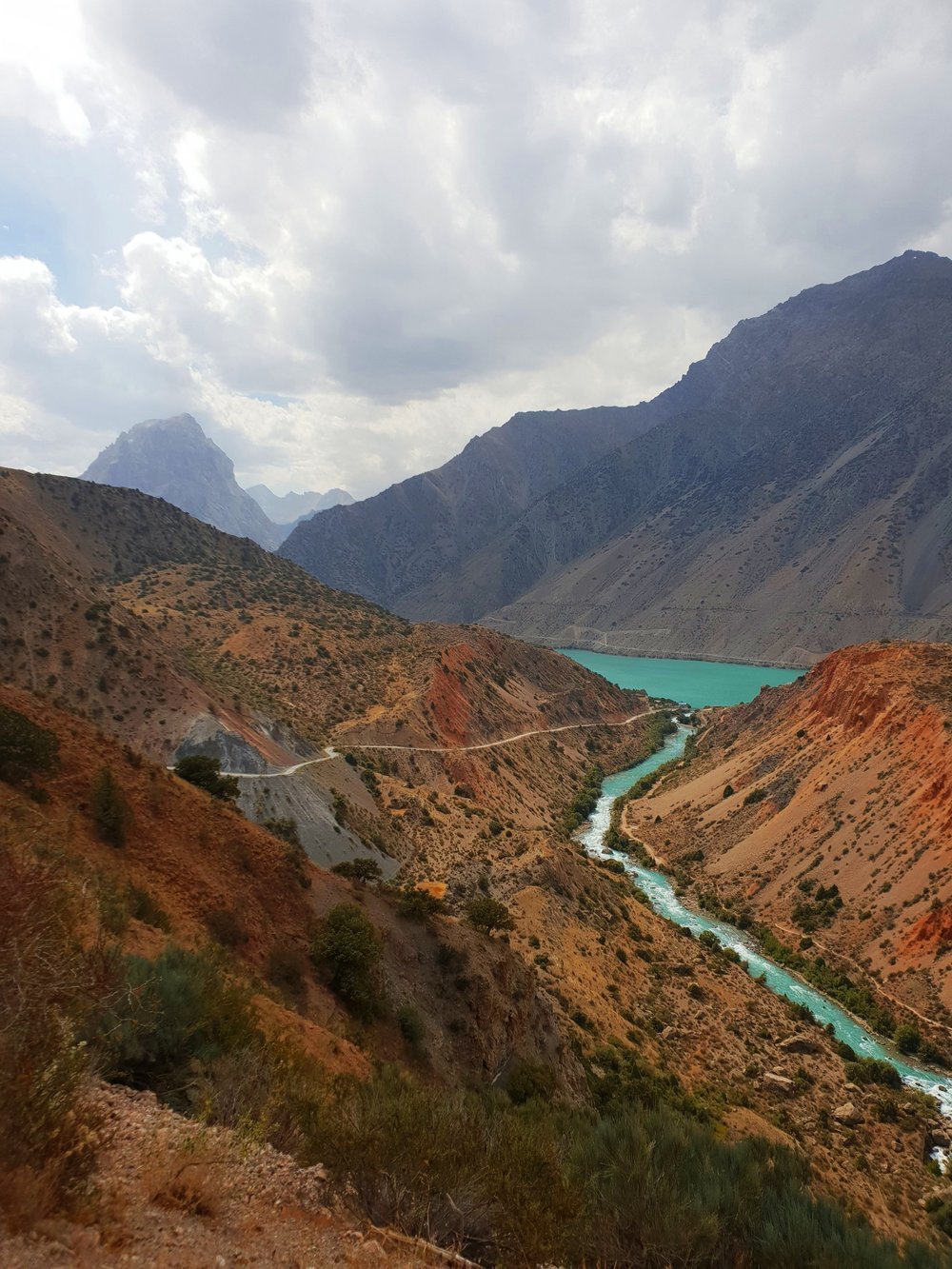 A view of a stunning turquoise river running from a lake, nestled amidst towering mountains.

The familiar Central Asian themes were still on show in Tajikistan, as I remembered from my last Central Asian jaunt in 2017. Crumbling Soviet architecture and murals dot the landscape. Clapped out Russian cars chug down the street. People seem to be obsessed with watermelons. T-shirts with slogans are a must, despite mostly making no sense. A personal favourite t-shirt slogan: “Vamos London #7”, printed above a picture of Big Ben and the Sydney Opera House. And of course, the region’s most pre-eminent dish, ‘plov’, is everywhere. The dish itself is about as basic as the name suggests: rice and potatoes. 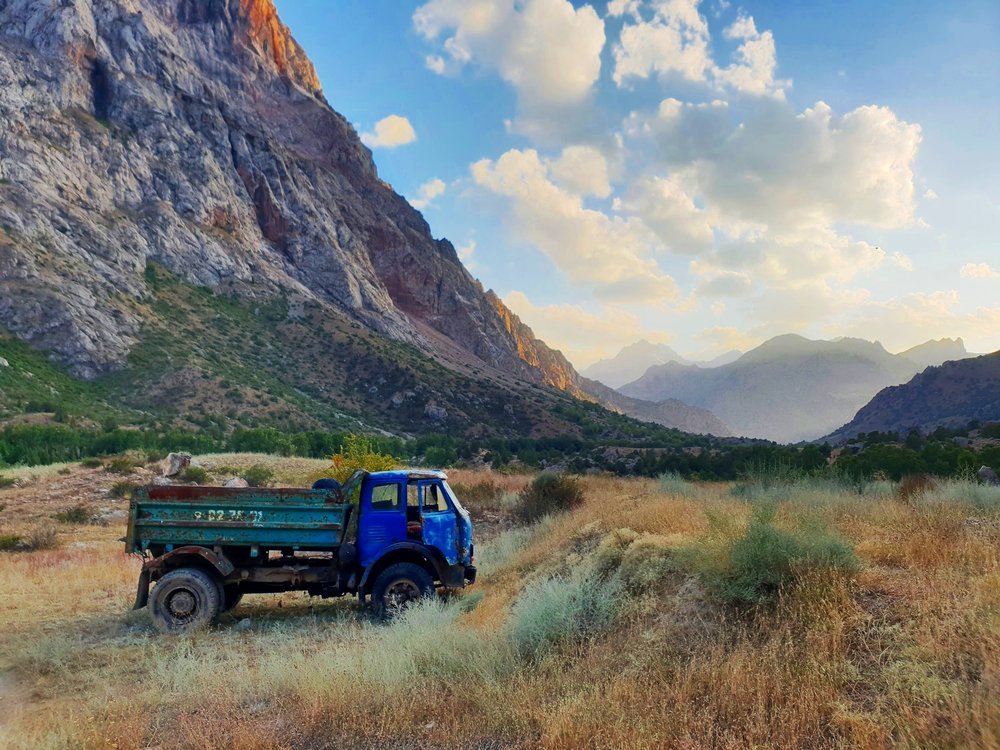 I paid someone to place the stereotypical Soviet-era truck here for the photo (not actually).

While the previous paragraph would imply that I don’t like Central Asia, you would in fact be very much mistaken. In case you didn’t know, I like to travel. I get great satisfaction from going places few people visit (Tajikistan has just 9,000 tourists annually) and waxing lyrical about them. Music snobs use a similar ploy. They intentionally like music no-one has ever heard of, in the hope of demonstrating cultural superiority over those who like ‘commercial’ or ‘popular’ things. So against this self-aggrandising backdrop, I’ll explain what made Tajikistan so fascinating to visit. 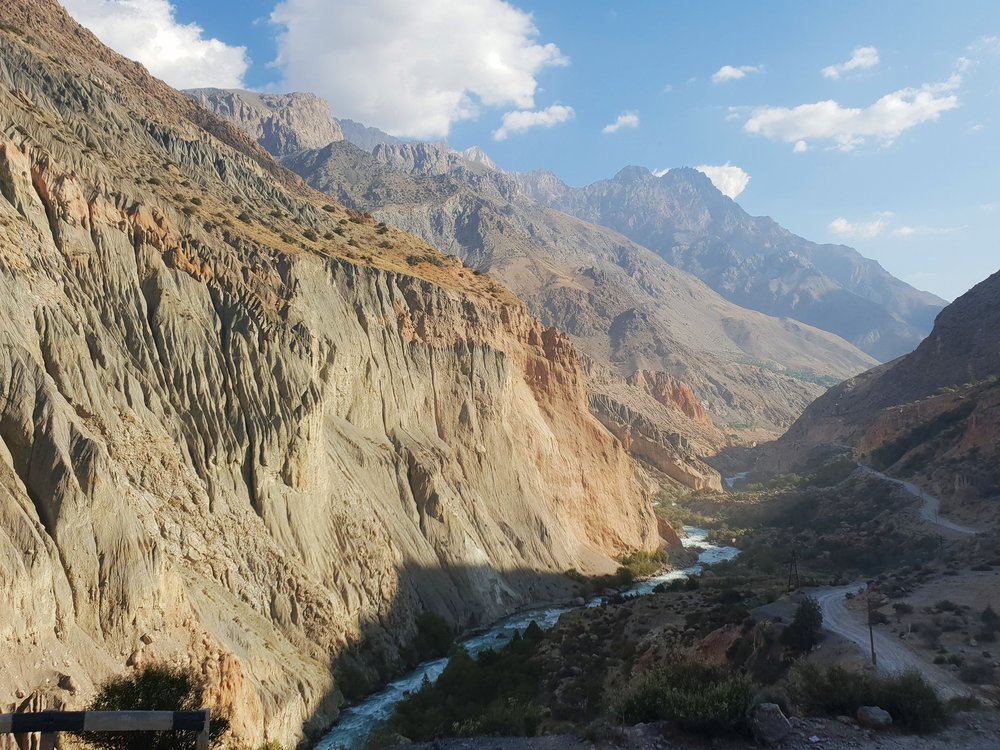 A view down a valley with mountains of epic proportions in the distance. 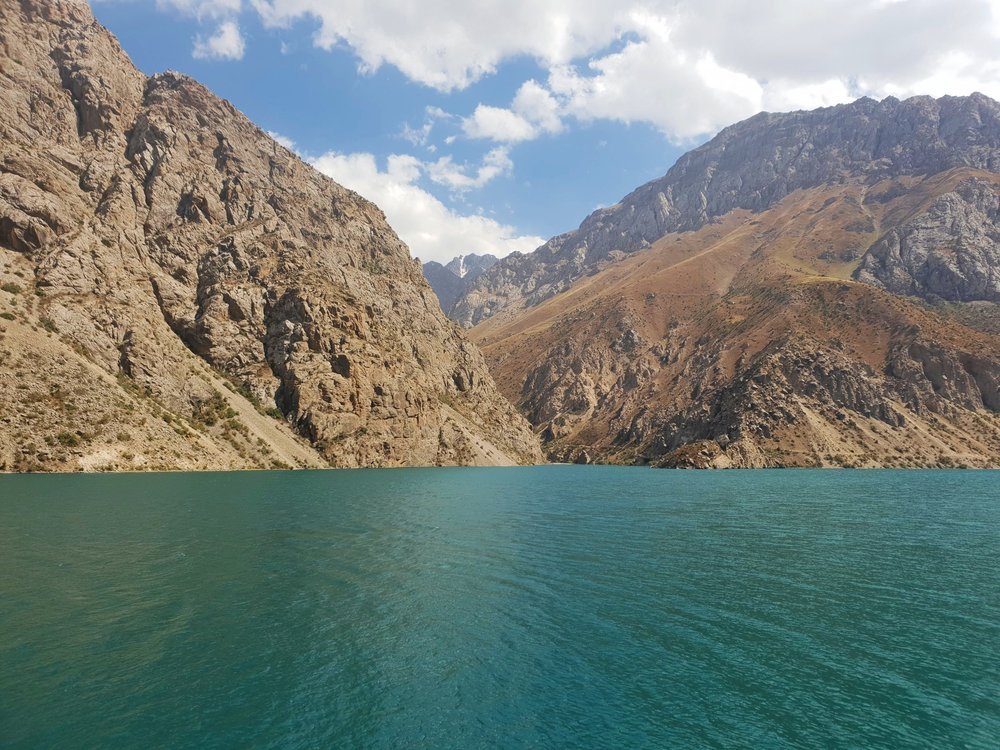 Stunning scenery like this is commonplace in Tajikistan. The peak in this photo, taken in the ‘Seven Lakes’ region, is well over 6,000 metres. Or around five times the height of the UK’s tallest ‘mountain’, Ben Nevis.

You don’t know much about Tajikistan, do you? You uncultured philistine… Well, it’s a small nation in Central Asia with a population of around nine million. It was formed when the Soviet Union collapsed in 1991. Since then, it has been led by one man. A great man. Emomali Rahmon. In my opinion, his grip on power is such that Tajikistan takes third spot in the world’s great leadership cults. Tajikistan is a “nepotocracy” – politics and business are dominated by relatives of the president’s family. Obviously, the number one leadership cult is North Korea, led by the little rocket man himself. Turkmenistan is a close second. Despite having surely the longest name of any world leader, Gurbanguly Berdimuhamedow, and being adept at shooting guns and DJing on national TV, Turkmenistan’s leader narrowly misses out on the top spot. 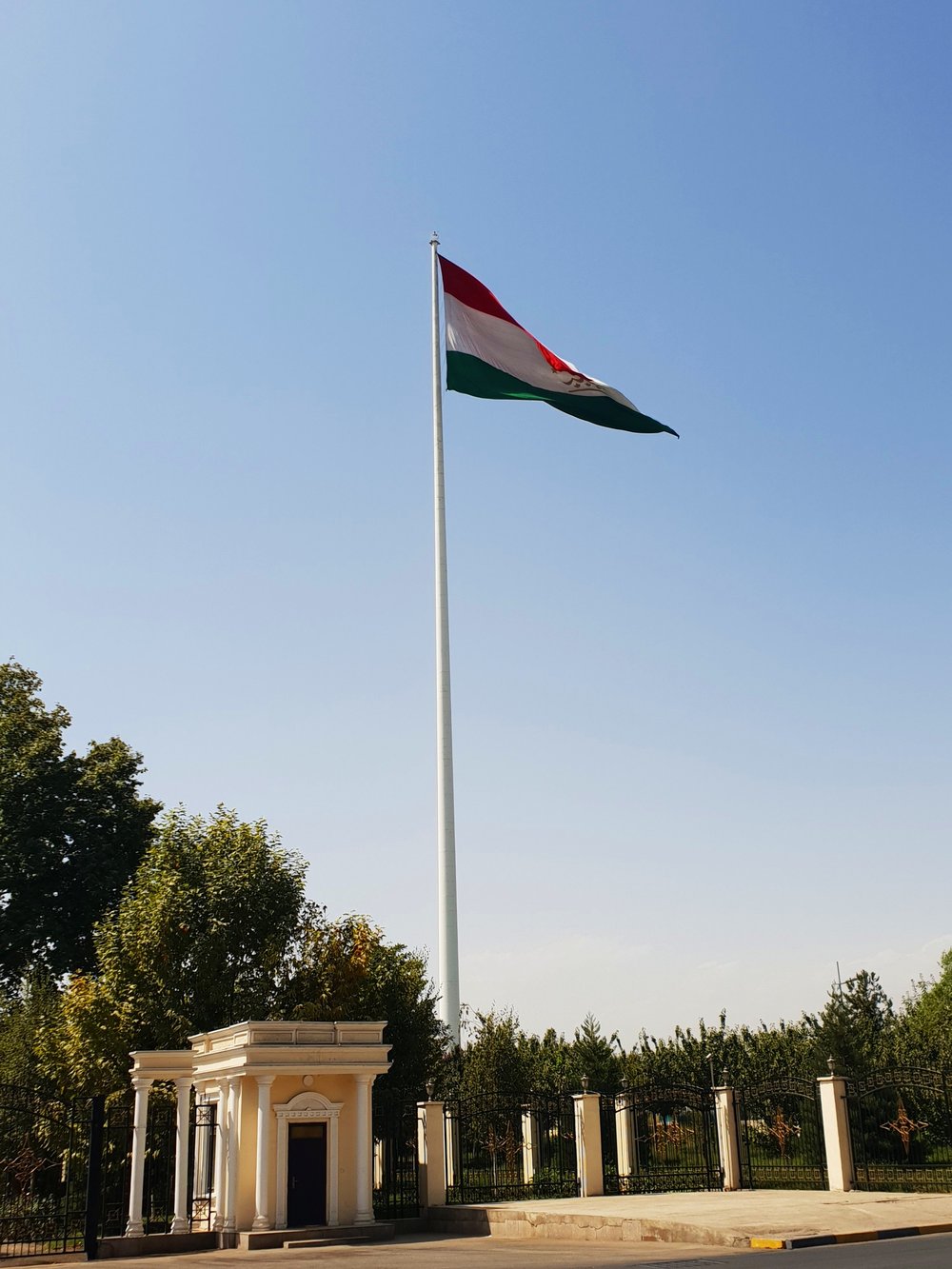 In my seminal posts on Central Asia in 2017, at least in my mind, I highlighted the fact that Central Asian leaders seem to believe that having the biggest flag equates to having the best country. Tajikistan has the second largest flagpole in the world, crucially pipping nearby rivals Turkmenistan and Azerbaijan to the ‘post’. Making up the rest of the global top five are Saudi Arabia in first position and North Korea in fourth. If anything, this implies having the smallest flag might actually be a good thing.

A ‘bronze medal’ isn’t too bad for Tajikistan. Rahmon ticks many of the leadership cult boxes. There are portraits of him on most buildings. Newspapers are mainly filled with him pictured surveying and pointing at various things, such as factories and sports pitches. Indeed, he personally opened the largest swimming pool in Central Asia during my visit, with his son (the country’s next leader). While I would love to say that this means things are going swimmingly in Tajikistan economically, this is perhaps not the case.

It is very poor. GDP per capita (annual average wages) is just US$800. The country remains highly reliant on Tajik citizens moving to Russia to find work, and then sending remittances back home. Economically, it lags behind most of the other Central Asian nations. As always, these issues aren’t anything that can’t be glossed over with a little bit of good old patriotism. No electricity? No matter! There are lots of large Tajik flags on the street outside your house. Poor sanitation? Yes, but at least the post office has a big portrait of your president on it. Governing is easier without a free press. China is now stepping in to build most of the country’s infrastructure, a trend I have seen in too many nations to count in recent years. 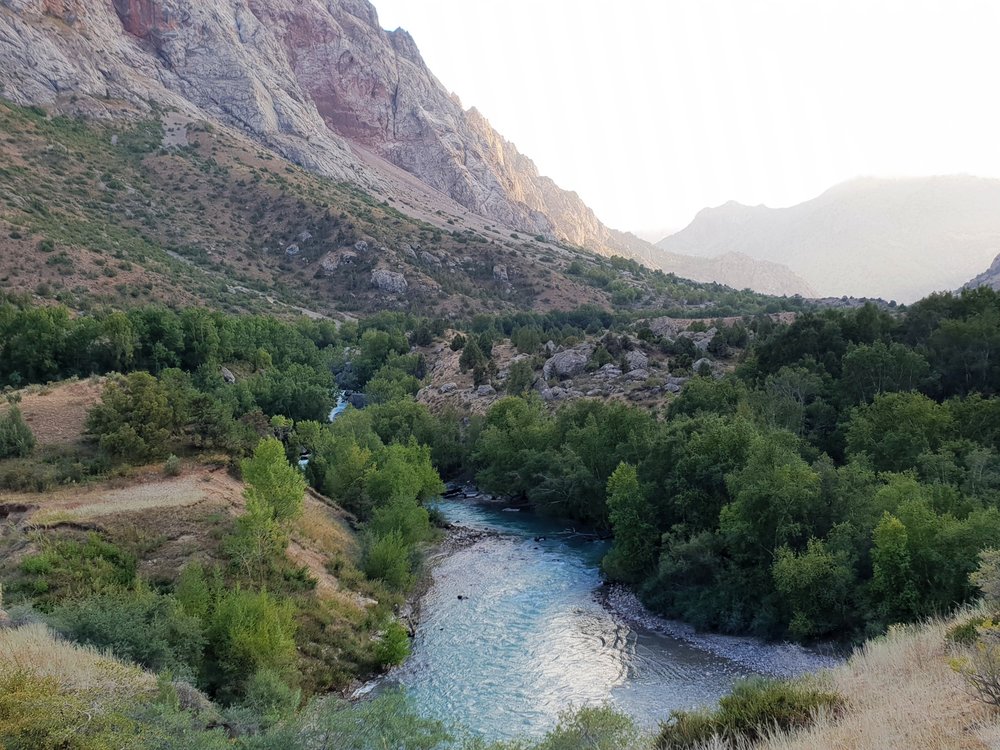 This photo was taken near Iskanderkul Lake. This one reminded me of the Garden of Eden, albeit a non-fictitious one.

My time in Tajikistan was brief, a week spent mainly exploring the Fan Mountains in the north of the country. But Tajikistan is small, so you can squeeze in quite a lot in a few days. Within half an hour of leaving Dushanbe, you quickly start climbing into arid, jaw-dropping mountains. Near-vertical peaks, multi-hued lakes, and snow-capped peaks start towering over you. Indeed, these mountains are huge. Ismail Somoni Mountain is 7,500 metres high, the 15th tallest in Asia. The USSR renamed it ‘Stalin Peak’ in 1933 and then ‘Communism Mountain’ in 1962. Even hills had to be ideologically on point. 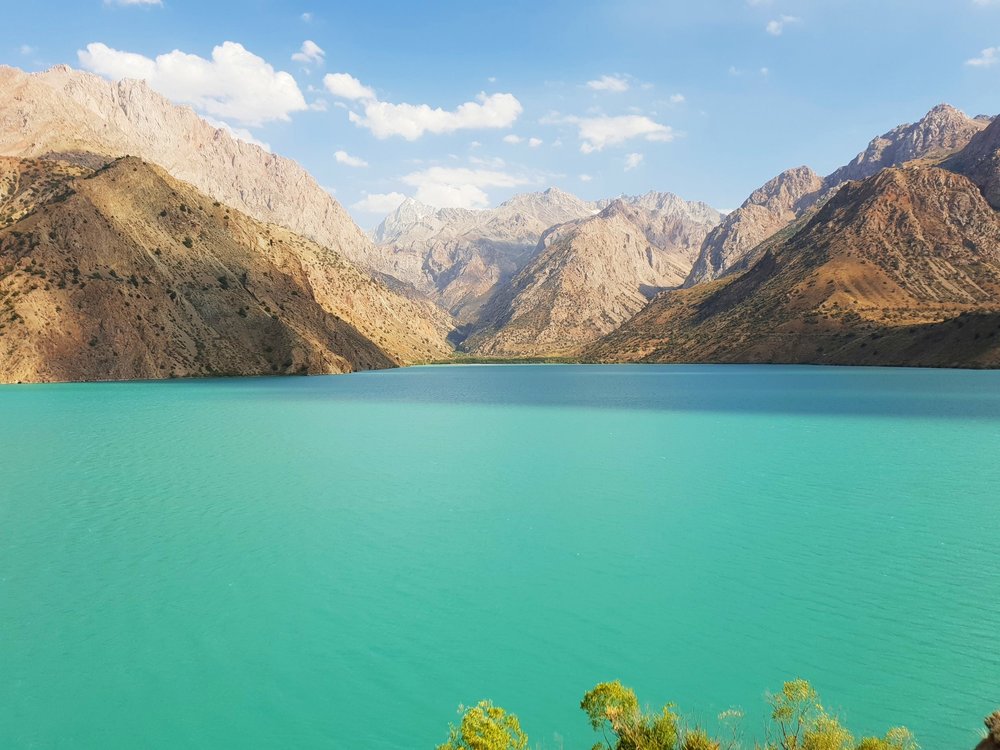 Iskanderkul Lake. While it looks inviting, the lake is this colour as it is fed into directly by glaciers. 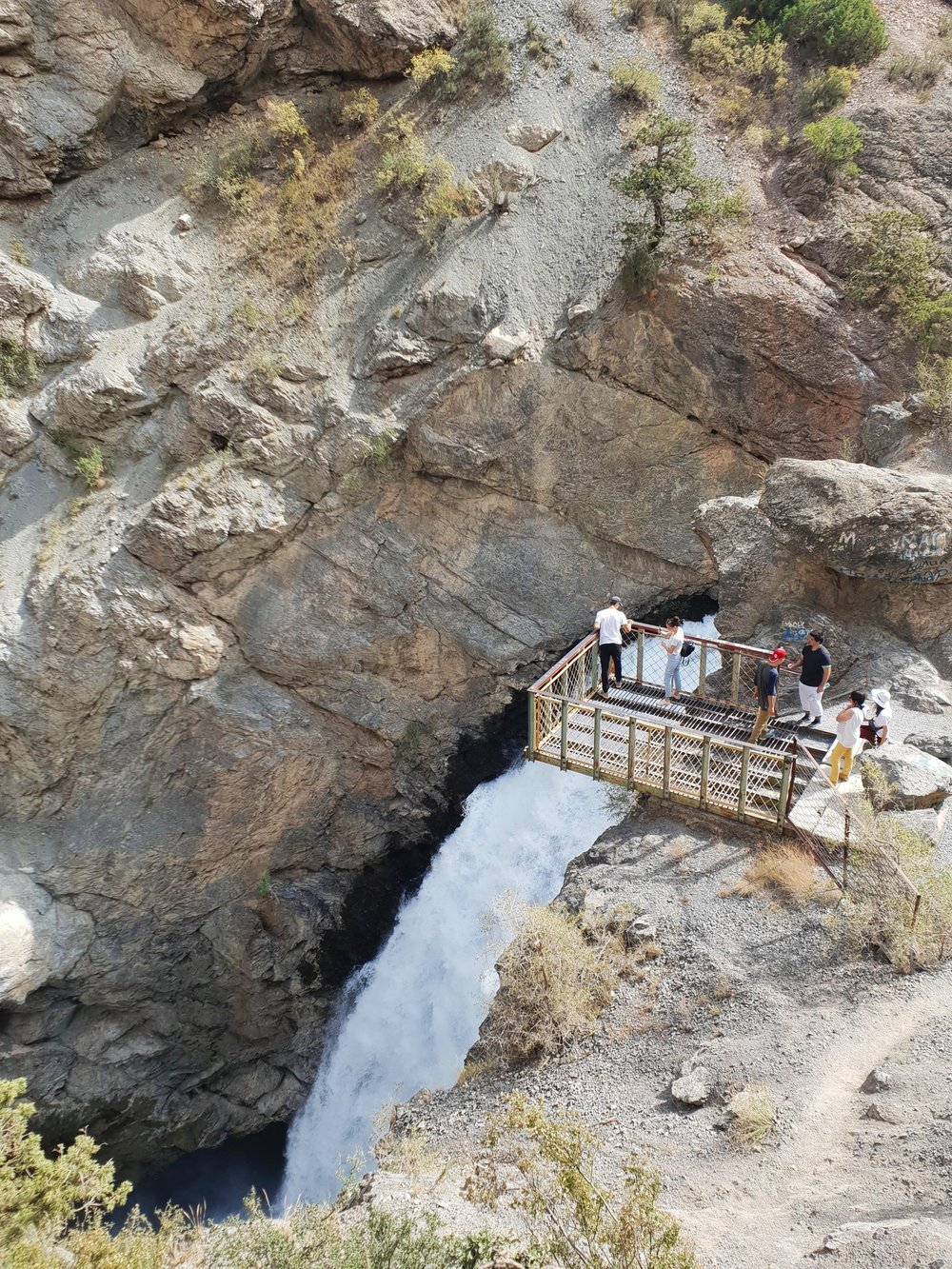 This viewing platform utilises advanced cantilever technology to dangle you over a large waterfall. The big rock balancing on the right appears to be holding the entire structure in place.

2,500 metres up, we came across Iskanderkul Lake, with its glacial, turquoise water. From here, a trip further up into the ‘Seven Lakes’ (Marquzor Lakes) region is mesmerising. For climbers and hikers, these stunning mountains are prized as some of the best on Earth. As with all places with few visitors, it’s the fact that you have scenery like this to yourself that makes it so special. Small villages give you a glimpse of rural life, which appears to have remained unchanged for many years.

In Tajikistan you can stand alone, surveying the vast beauty of the natural landscapes without being bothered, apart from the incessant internal mental chatter that follows us all wherever we go. “That mountain is so vast, it makes me feel so insignificant… I wonder what I’ll eat for lunch… My phone is almost out of battery…” For a glimpse of Tajikistan’s ancient history, a trip up to Panjakent is a neat way to bookend a trip through the Fan Mountains, with artefacts and ruins that are over 5,000 years old. 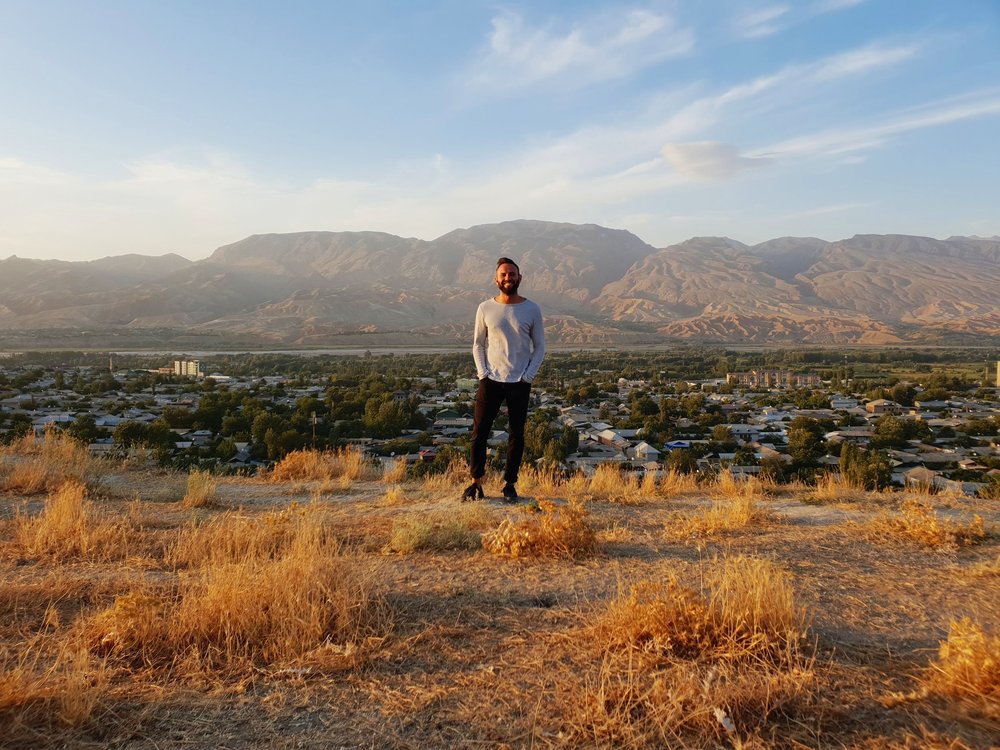 Panjakent. The city is said to have stunning views of the back of my head.

Apart from the aforementioned large pool, Tajikistan’s capital is a pleasant place to spend a few days. Particularly if you like Soviet architecture. Rudaki Park, named after the country’s famed poet (of whom I had never heard ), contains excellent examples of this. A particular highlight was the Ismail Samani statue, pictured below. Samani conquered much of Central Asia in the tenth century. Tajikistan’s currency, the somoni, is named after him. If you can’t name all the Central Asian countries and their currencies, you clearly have more of a life than I do. 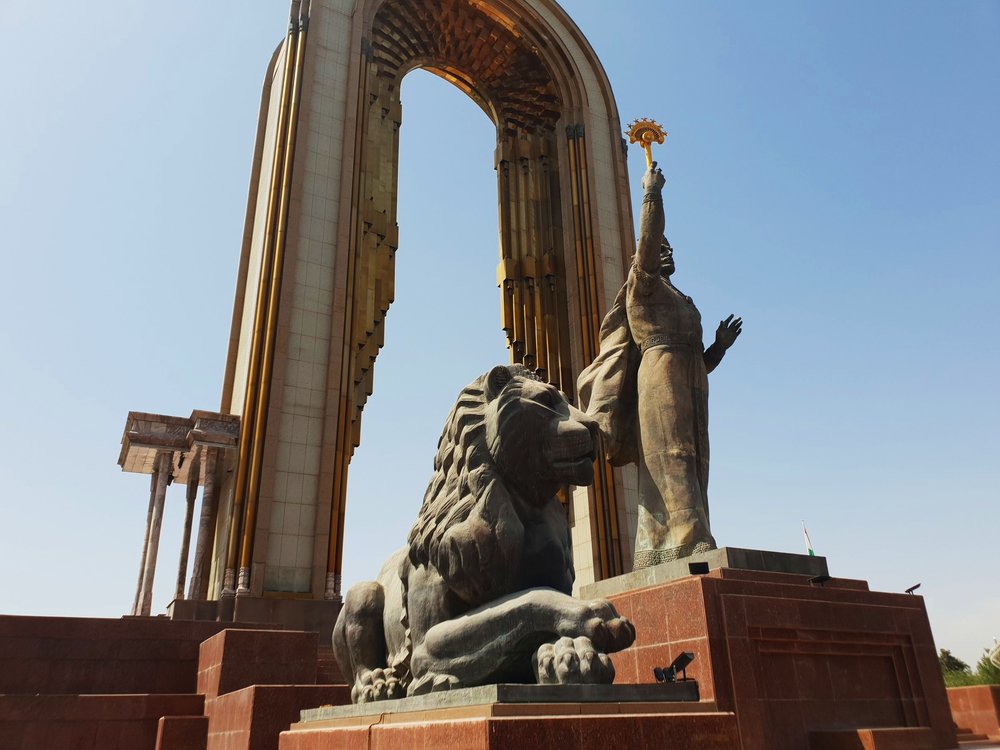 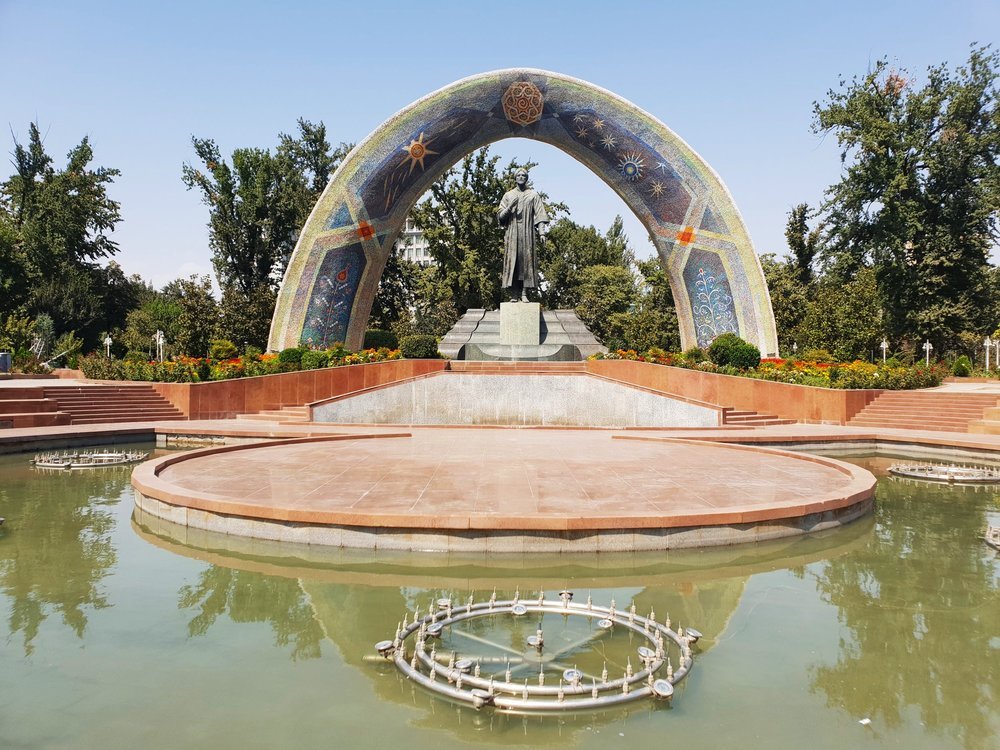 The Rudaki statue in Dushanbe, not a prop from the TV show ‘Stargate SG1’, apparently.

I will definitely visit Tajikistan again. With tourism just beginning (again, well done me for being ahead of the curve here), the locals could not have been friendlier. Everyone seemed so happy for you to be visiting their country. This included the police officer who tried to get a bribe off my driver, and cheerily waved and smiled at me as he attempted to fleece us. There is still much more to see. The south of the country bordering Afghanistan is supposed to be stunning. Despite the poverty endured by some, the Tajik people appear to be happy. One of the reasons may be directly above them – the stunning peaks and lakes that form a part of the fabric of their lives.