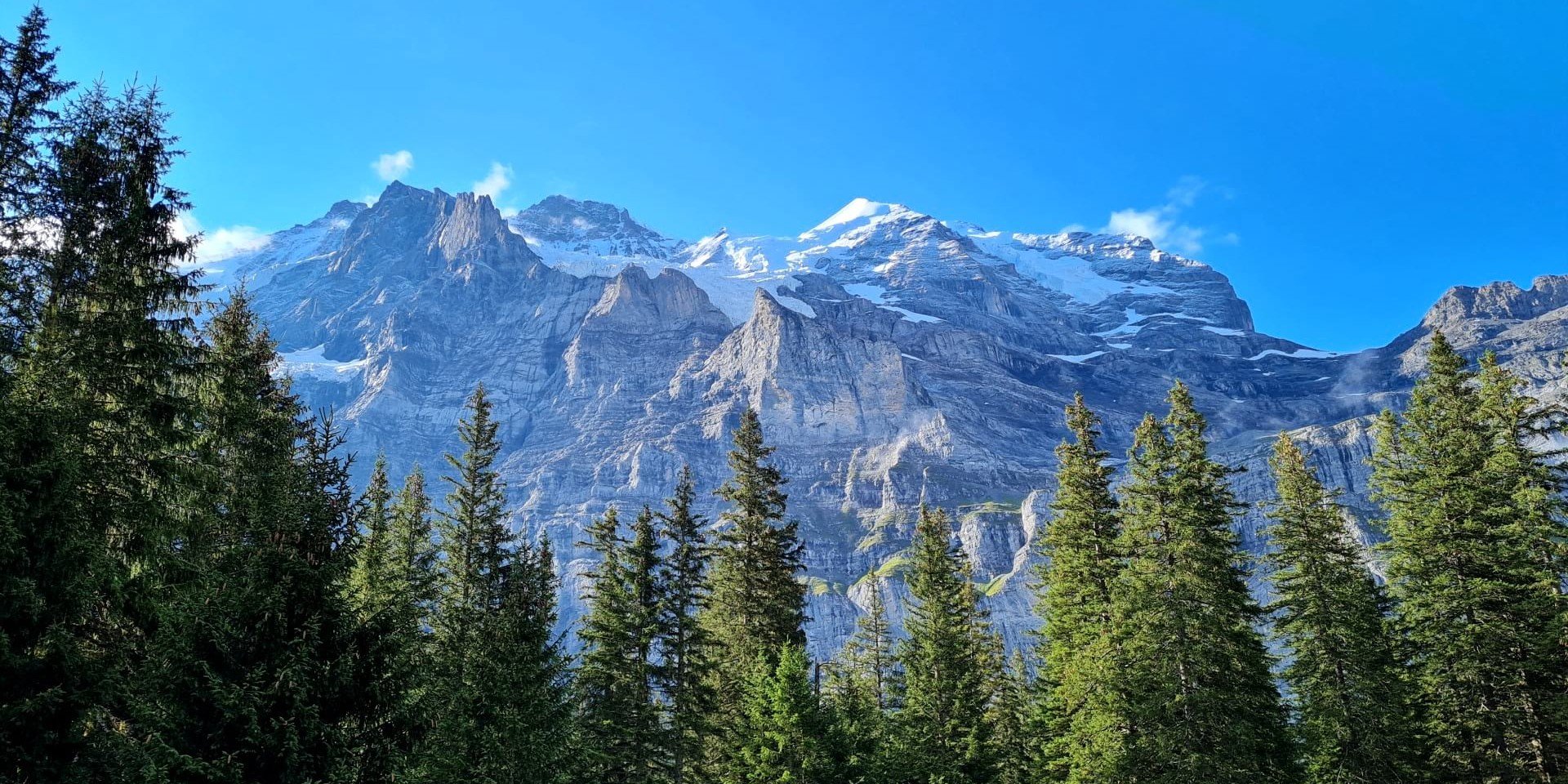 I walked – nay, I yomped – through the stunning Alpine scenery. The ground I trod on was green and lush, peppered with colourful flowers. The noise of clanging cowbells filled the air, sounding like off-key wind chimes. Up above, majestic snow-capped peaks jutted high up into the rich blue sky. Glaciers clung impossibly to jagged summits. Waterfalls plunged down granite cliffsides. Up in the Swiss Alps, near Grindelwald (a town, not a Harry Potter character), I was reminded in the most visceral sense of why I love Switzerland so much. In summer in particular, it’s one of the most naturally perfect places you could ever hope to imagine. 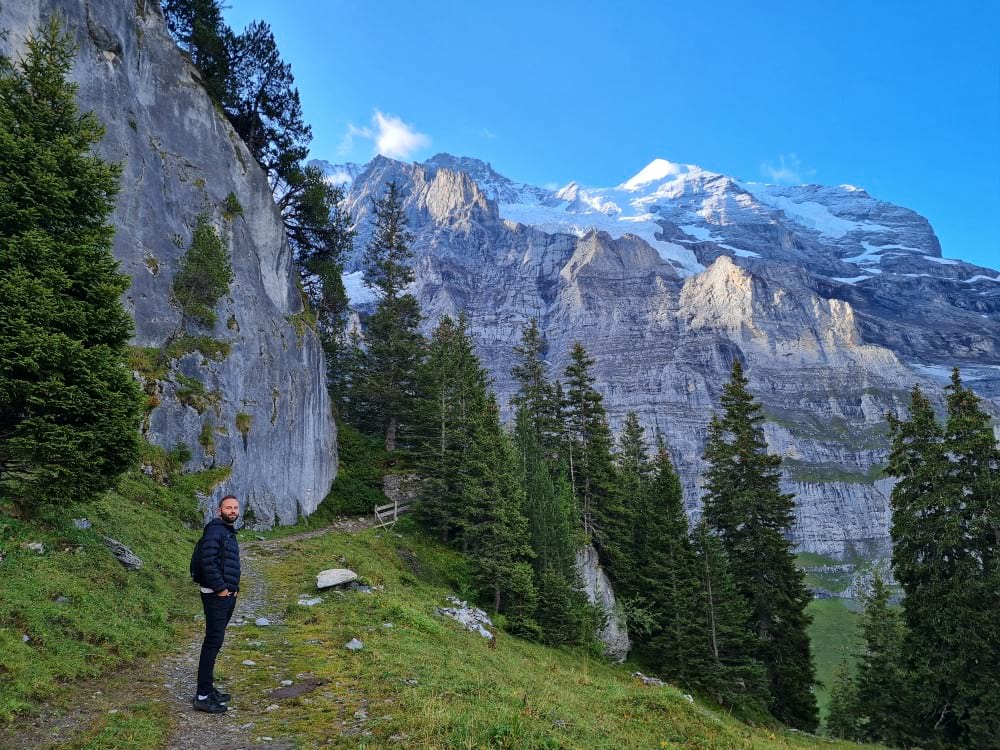 High up in the Swiss Alps, near Wengen.

Switzerland has unquestionably some of the most beautiful mountain scenery on the planet. A feeling which is enhanced by the ridiculous ‘tweeness’ of Swiss villages. Most chalets look like something from Hansel and Gretel. Wooden houses with widely projecting roofs dot the mountains, adorned with richly decorated facades and wooden balconies. Swiss flags abound. Every chalet is beautifully decorated, with colourful flowers in front gardens and hanging plants peppering windowsills. 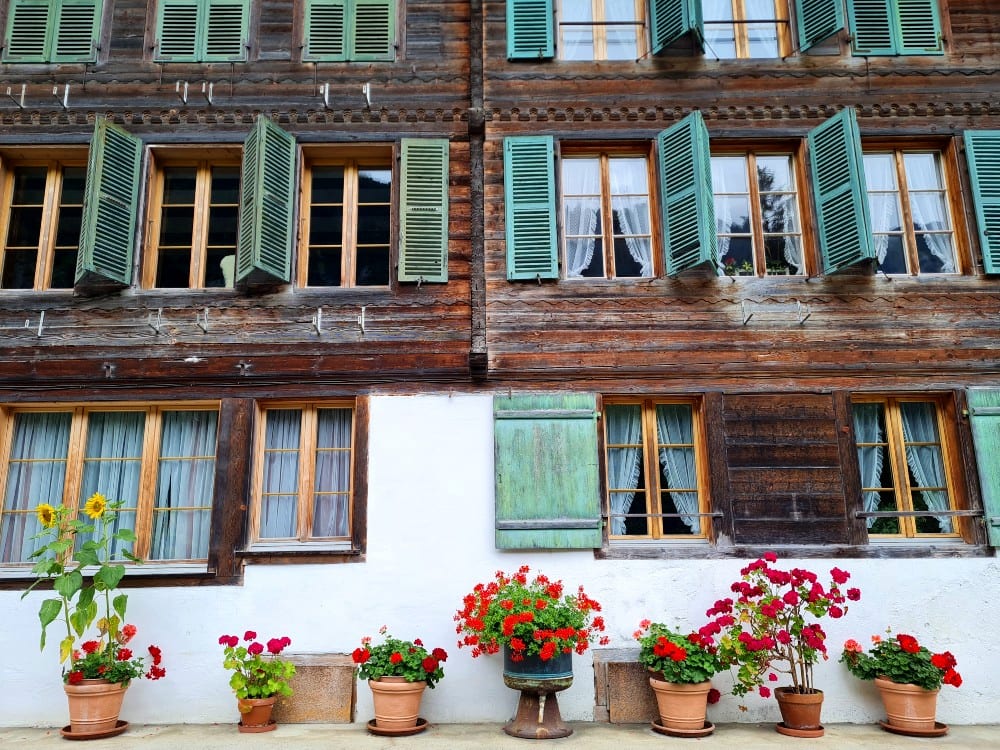 A typical Swiss chalet. Or a still from a Wes Anderson movie. You decide.

In light of this loveliness, my girlfriend and I felt lucky to be strolling through the village of Lauterbrunnen, situated in a gaping canyon. We were flanked on either side by kilometre high cliffs, which a handful of humans were sporadically hurling themselves off, seemingly in the name of fun (they were wearing parachutes). We passed the first cheese vending machine I’d ever seen, possibly the most Swiss thing in existence. 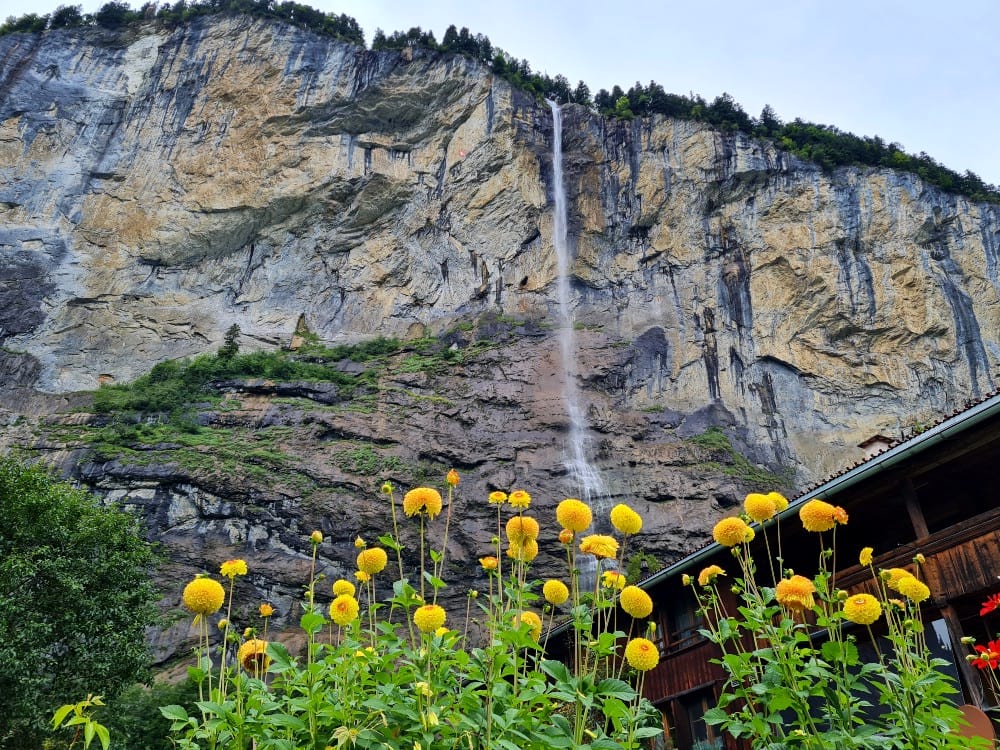 Feeling like I was in a kind of Swiss Disneyland, I questioned whether all this tweeness was optional. After all, in parts of Switzerland you can be fined for failing to wash your car, and men living in apartments aren’t allowed to pee standing up after 10pm. Perhaps failing to curate a pretty-enough flower display would be equally worthy of punishment? Perhaps it’s a crime not to have a chalet that looks like a chocolate box? 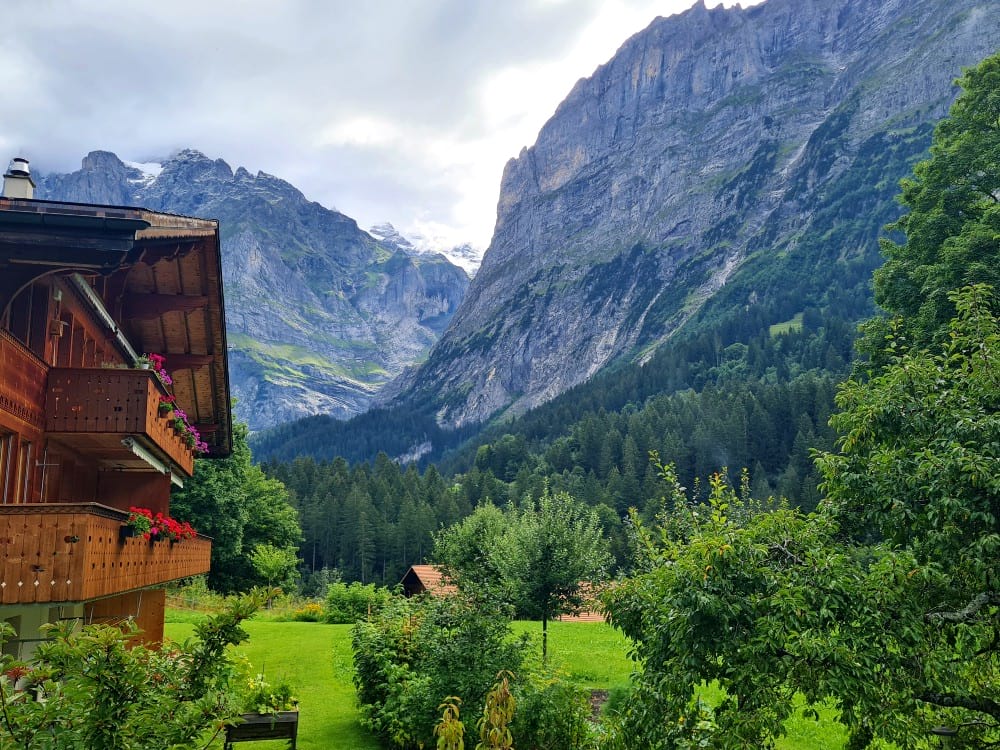 It’s sometimes hard to believe anything bad has happened in Switzerland, when it looks so damn perfect.

Switzerland is a country that likes to do things differently. Despite being slap bang in the middle of Europe, it’s not in the European Union. It has the only square flag in the world, aside from the Vatican (which to be honest isn’t a proper country). It’s the only direct democracy in the world. This means that all major government decisions get put to the electorate in regular referendums. Switzerland has no head of state: a seven-member Federal Council jointly runs it. Even its plugs are different; just a tiny bit smaller than ones from neighbouring EU countries (which probably annoys thousands of tourists every year, me included). 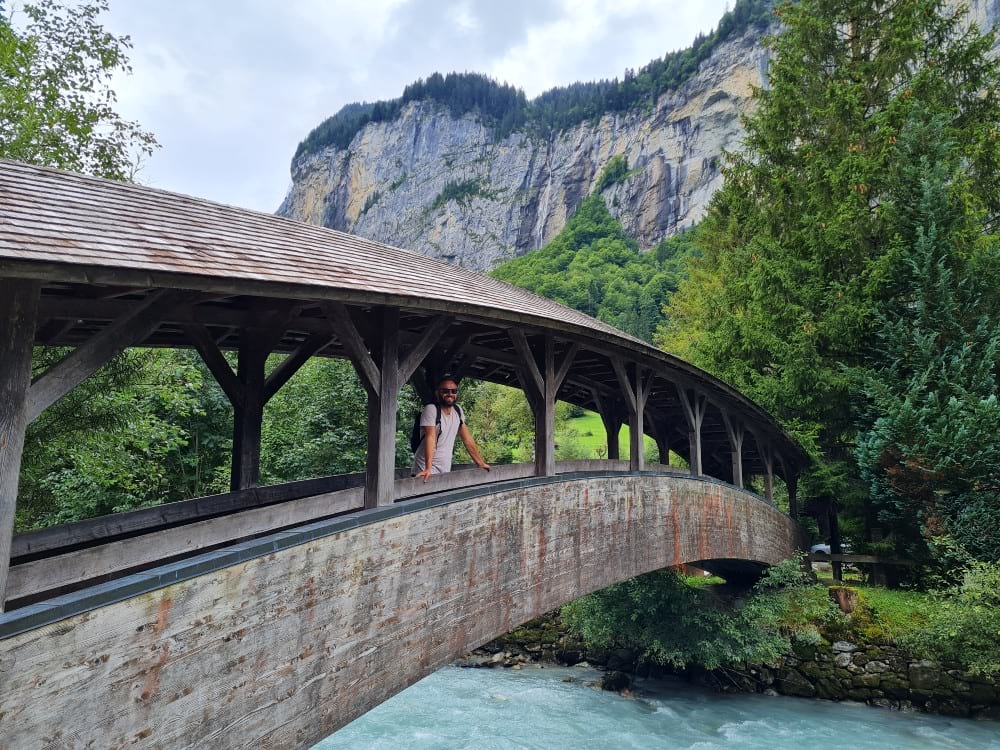 This is the closest I got to white water rafting in Switzerland.

Undoubtedly, many good things have come from Switzerland’s desire to do things differently. Generally speaking, landlocked countries are usually among the poorest in the world. Switzerland, however, is one of the richest. It regularly gets ranked as the country with the highest quality of life on Earth. And when you visit, you’d struggle to disagree. Everything is spotless. Everything runs efficiently. And at times, particularly in the summer, Switzerland can feel like a kind of utopia. Switzerland is so trusted internationally that the heads of FIFA, the Olympic Federation, the UN, the Organisation of Economic Cooperation and Development (OECD), the World Health Organization (WHO), and the World Trade Organization (WTO), to name but a few, are based in Switzerland. 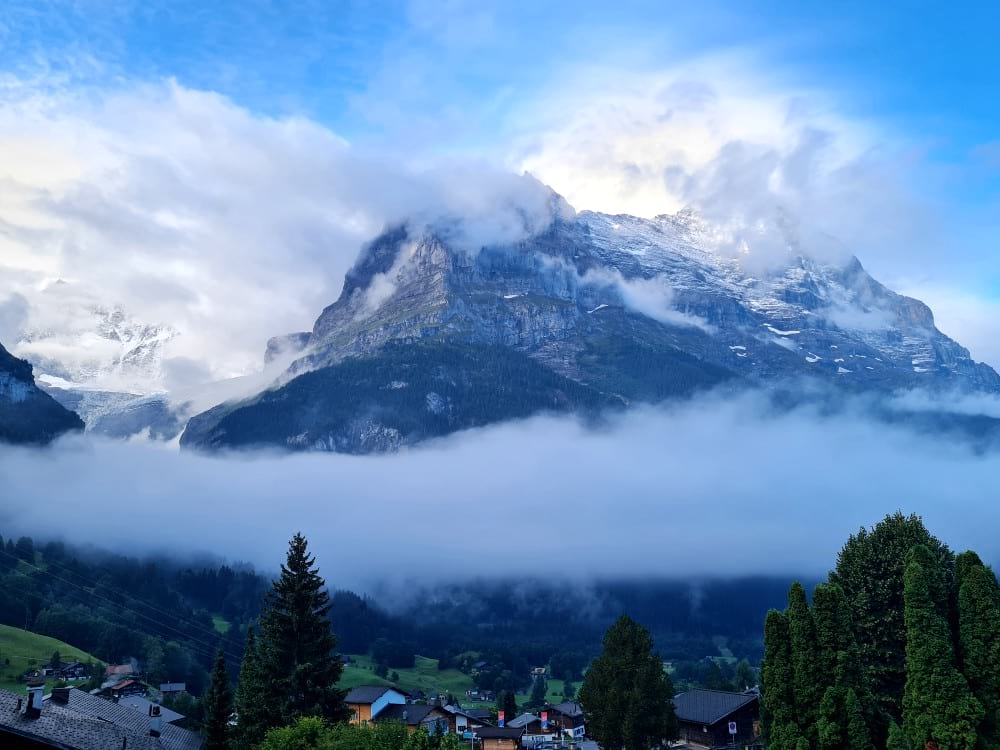 Part of this trust comes from Switzerland’s political ‘neutrality’, which means it doesn’t take sides in international disputes or get involved in military conflicts. This might seem great on the surface, but Switzerland can afford to be neutral, as Germany, France, and Italy surround it. These countries are unlikely to simply wave through potential aggressors to attack Switzerland, and the Swiss know this. Neutrality also means Switzerland has been quite staggeringly ‘neutral’ to appalling regimes. Many of its banks were filled with Nazi gold during WWII, and helped the Nazi war effort. And today, any horrible despot or corrupt businessperson can quite easily hoard their money – no questions asked – in Switzerland’s large and secretive banking sector. So, for all its merits, Switzerland’s by no means perfect. 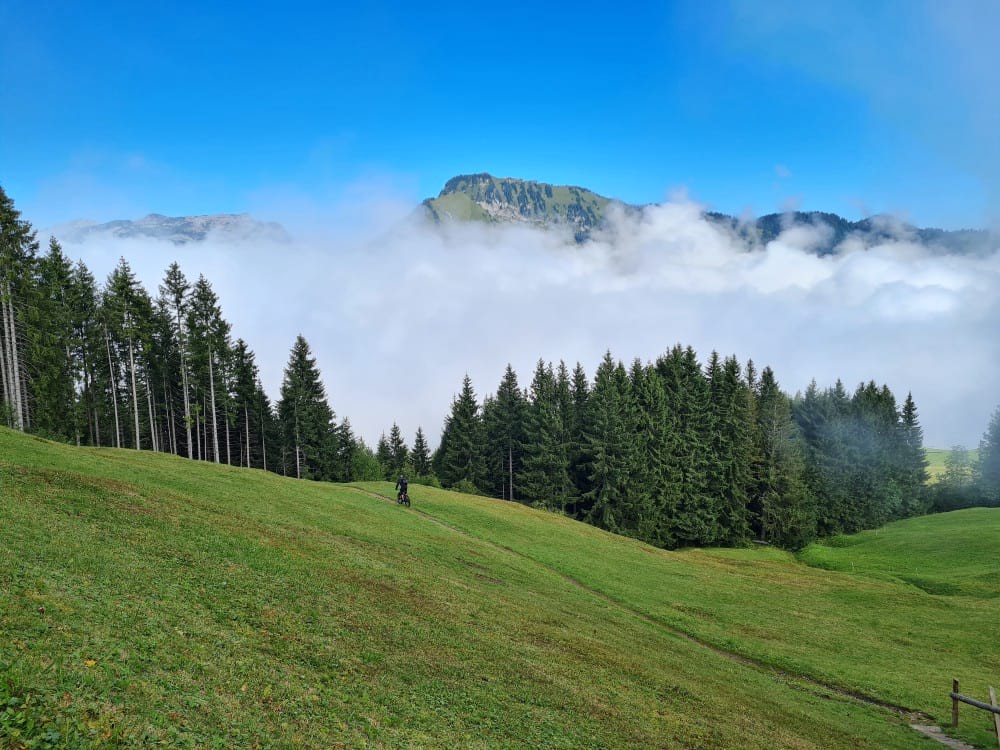 The hills are alive.

A Grand Drive Around A Small Country

We entered Switzerland in the west, just over from the French border in Geneva. Sitting on the majestic and turquoise Lake Geneva, in summer Geneva feels like a town in the French Riviera. A trend helped by the fact we were in the French-speaking part of the country. As we wandered the city’s immaculate streets, people were leisurely drinking coffee and darting in and out of patisseries. (In my view, looking not as worried as they should be about the 27km Hadron Collider particle accelerator smashing atoms together beneath the city.) Aside from millions of Swiss flags adorning every possible building and many of the streets, Geneva felt very French indeed. 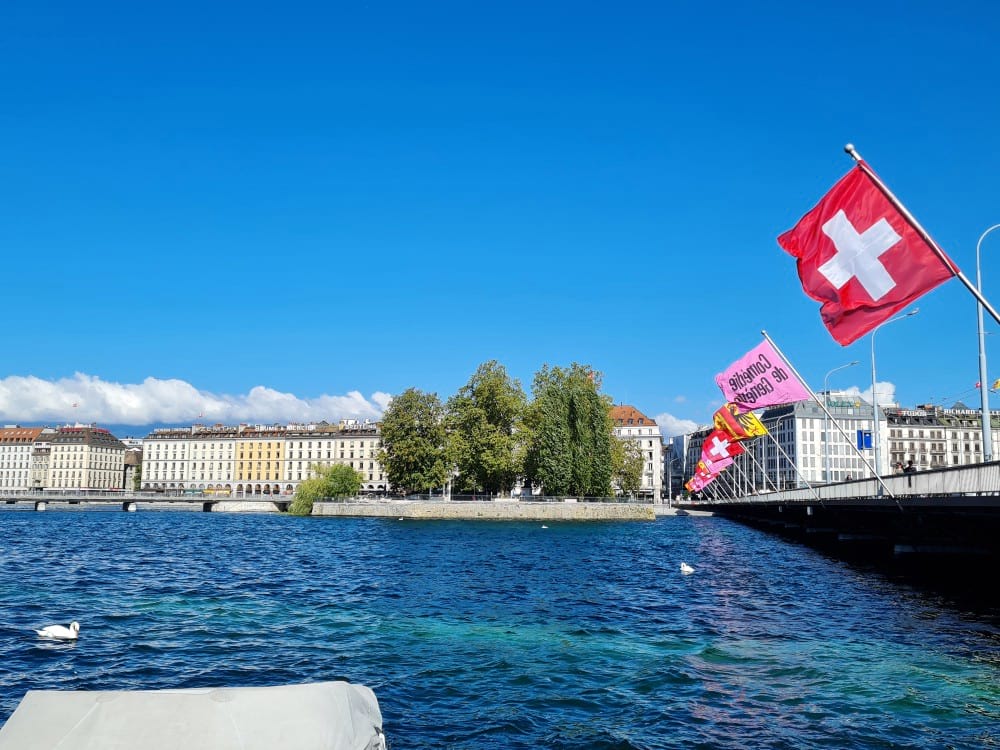 Switzerland’s square flag on show in Geneva. A reflection of its square population?

This is something I’d noticed on a business trip to Switzerland a few years earlier. I gave a presentation about European economics and politics to a room full of businesspeople in Geneva in the morning. Everyone arrived early, chatted and gossiped, listened to me drone on for around an hour, and then proceeded to chat and gossip for ages afterwards. Clearly, going to work wasn’t a priority; and certainly less so than nattering over coffees. I hopped on a train – which as always in Switzerland literally left the second it was scheduled to – and arrived in Zurich. 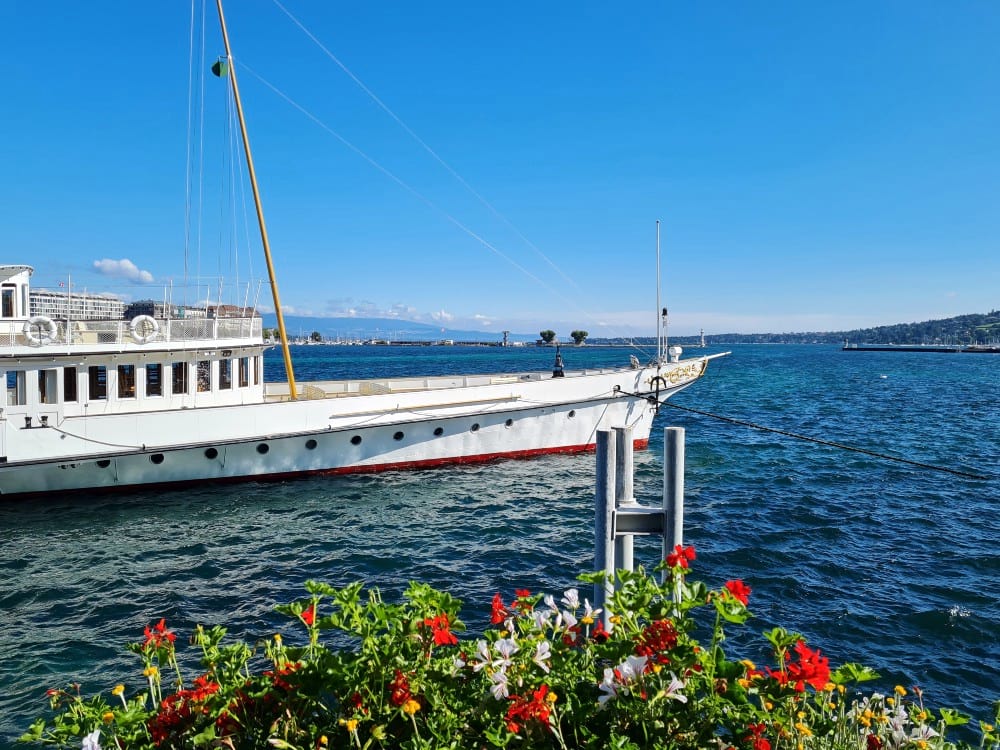 Looking out over Lake Geneva.

After lunch I gave the same presentation. This time in the German-speaking part of Switzerland, and any notions of Frenchness dissipated. People arrived just before my presentation started, looked reasonably glum throughout (I assured myself this couldn’t possibly be due to how boring my presentation was), and then left as fast as humanly possible to get back to work. It was quite eye-opening to see such huge cultural differences in a small nation seemingly only divided by language. 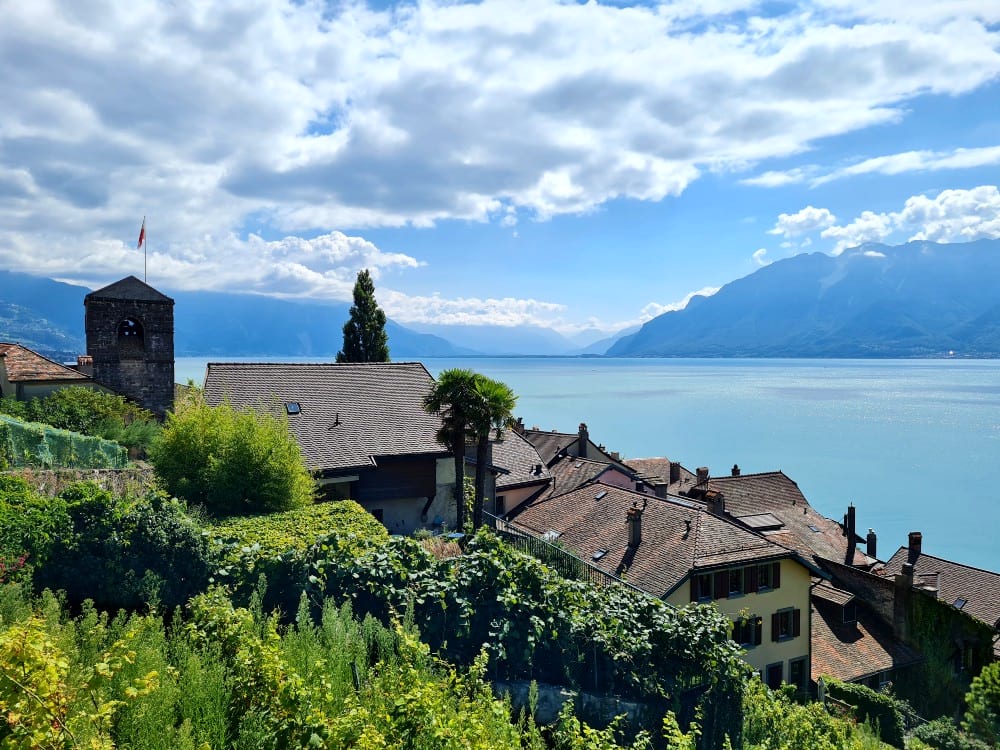 A Land Of Snow-Capped Peaks and Azure Lakes

Back in Geneva, we hopped in our car and headed east. Despite an hour spent driving on a motorway, we still found ourselves near the lake. Lake Geneva is vast. We went for a stroll in Vevey, a UNESCO World Heritage Site. I have no idea whether Swiss wine is famous, but at least here, the green vineyards plunging down vertiginous hillsides into the lake certainly looked appealing. Even more so given that snow-capped peaks towered over the opposite lake shore. It’s one of the most stunning places I’ve ever been to. If only I wasn’t one of few Western adults to conclude that all wine tastes awful, wherever it’s from. 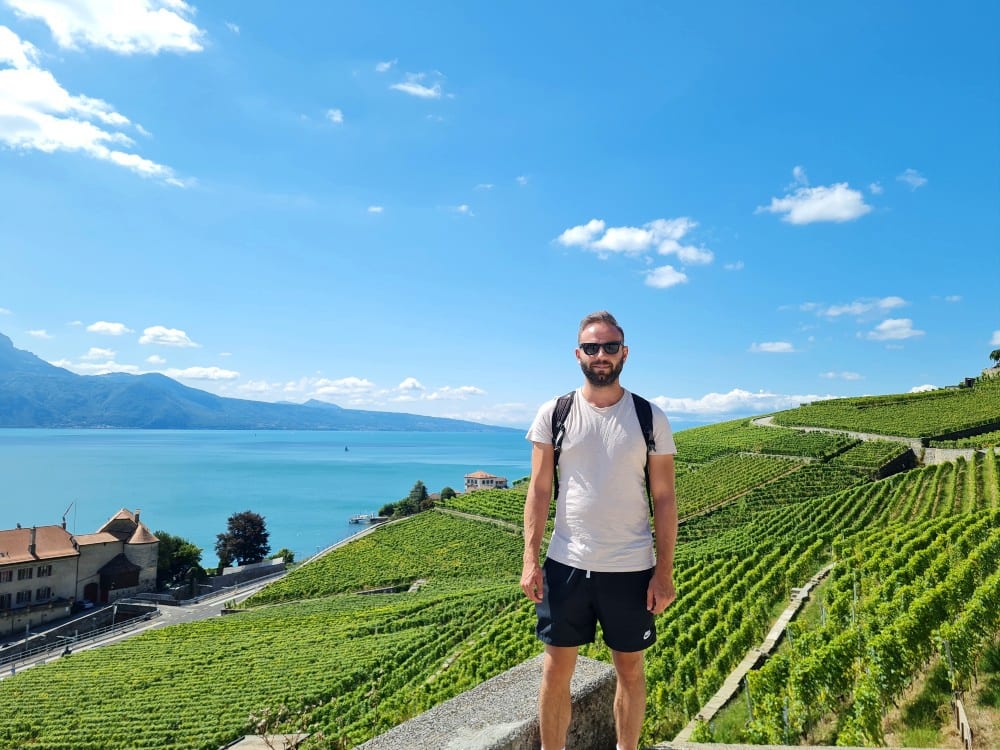 Vevey, Switzerland. For some reason, I look like I have about three brain cells in this photo.

Heading further east still, the Swiss mountain scenery became even more dramatic. Up in Grindelwald and in many parts of the Swiss Alps, you feel very small indeed. At times, you can be walking at altitudes of over 1,000 metres. This is roughly the same height as the tallest ‘mountains’ in the UK. And yet, high above, jagged and contorted mountains over 4,000 metres tower over you like a crashing wave. 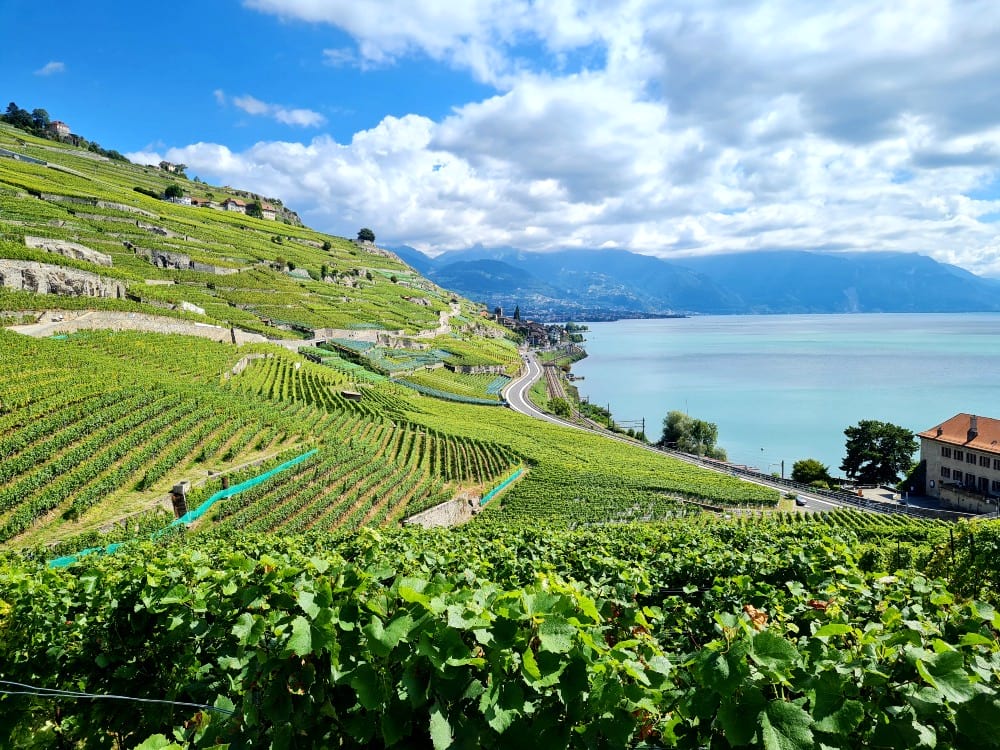 Swiss wine is much less famous than its chocolates or cheese. But at least its wine gets produced somewhere more beautiful than a warehouse or cow’s behind.

There’s something special about nature on this scale. It makes you feel so small, so helpless, and so insignificant. In many ways, it’s terrifying. “I’m an irrelevant little ape, in an impossibly vast universe, here for an infinitesimally small amount of time in the context of the cosmos. Shit.” But at the same time, I find comfort in the melancholic feelings that epic nature on this scale makes me feel. It reminds me of how lucky I am to live on this planet. And makes me truly happy to be alive. 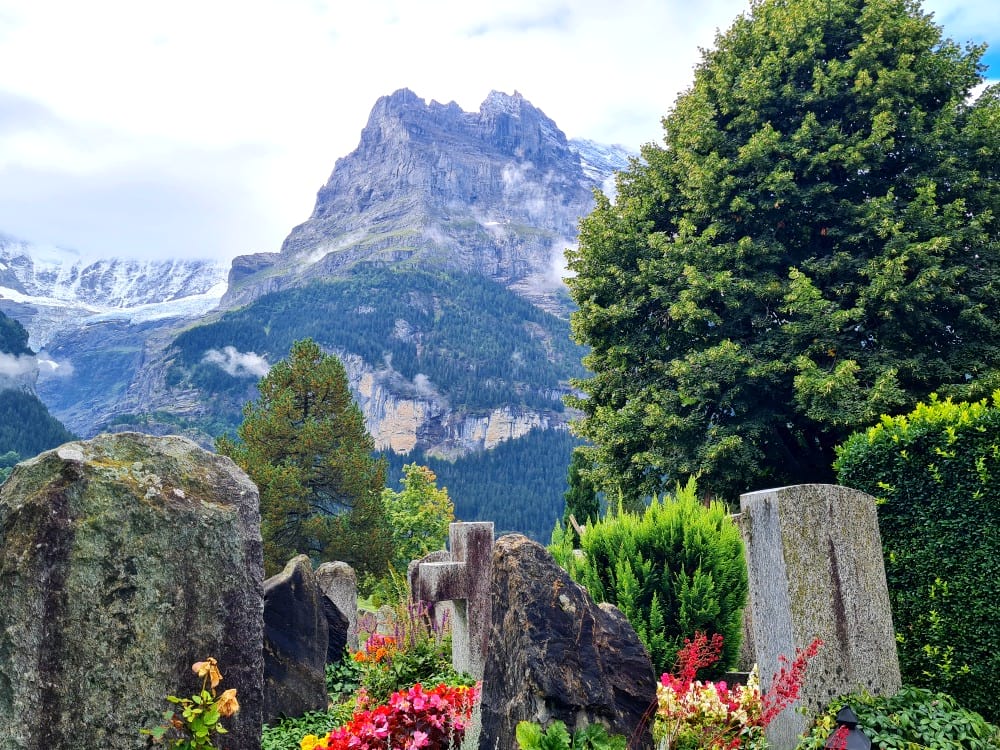 Not a bad resting place

Although, up in the mountains above Grindelwald, I was still finding it hard to put a very mundane mental nuisance out of my mind. A chairlift up to Kleine Scheidegg – which took about ten minutes – cost me a cool £30. One way. As a result, the internal chatter of my mind sounded something like this when surveying the epic scenery. “Wow. Look at those giant mountains. Pushed out of the crust of the Earth over millions of years, their peaks now scraping the lower atmosphere…Seriously though, £30? I’ve been on flights which cost that much…Remember the nature, remember the beauty.” Switzerland is one of the priciest countries on Earth, despite it artificially weakening its currency (the Swiss franc). If you don’t want to feel ripped off, don’t come. Although, in my book, it’s worth it for the epic beauty which Switzerland has to offer the potential visitor. 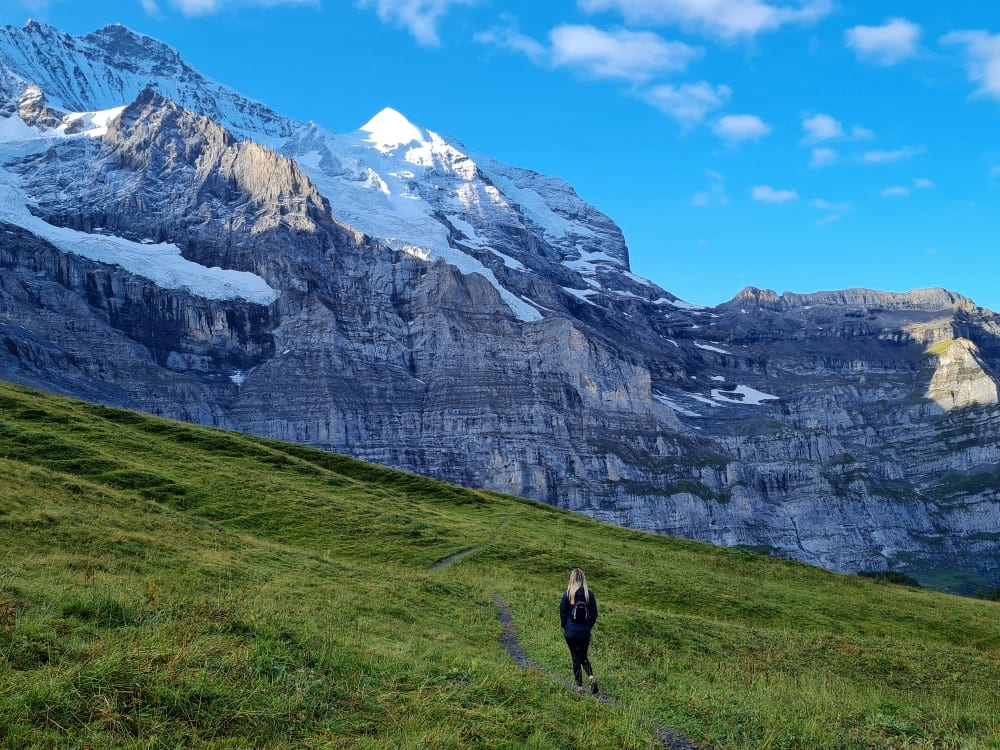 My girlfriend Sophie walking near Kleine Scheidegg. We (wisely) took the chairlift up to the highest possible point and proceeded to walk for many miles in incredible scenery. Thankfully, always downhill.

We ventured further into the German speaking parts of Switzerland. Passing stunning Interlaken, Lucerne, and Zug. After a few days in this marvellous little country, you get strangely used to seeing pristine azure lakes and towering Alpine scenery. So much so that you start implicitly taking it as a given that everywhere in the world is this beautiful (spoiler alert: it really isn’t). We arrived in Zurich. It’s a picture postcard of a town. Perfectly formed church spires dot the horizon. Cobbled streets wind their way around ancient and immaculately historic Swiss architecture. Crystal clear rivers snake through the city, until they reach stunning Lake Zurich. On a good day you can have a coffee in the centre of town looking over the lake, seeing the majestic Swiss Alps glinting and twinkling in the distant horizon. And yet, you can still be left with the feeling that Zurich, and indeed Switzerland, is just a bit boring. 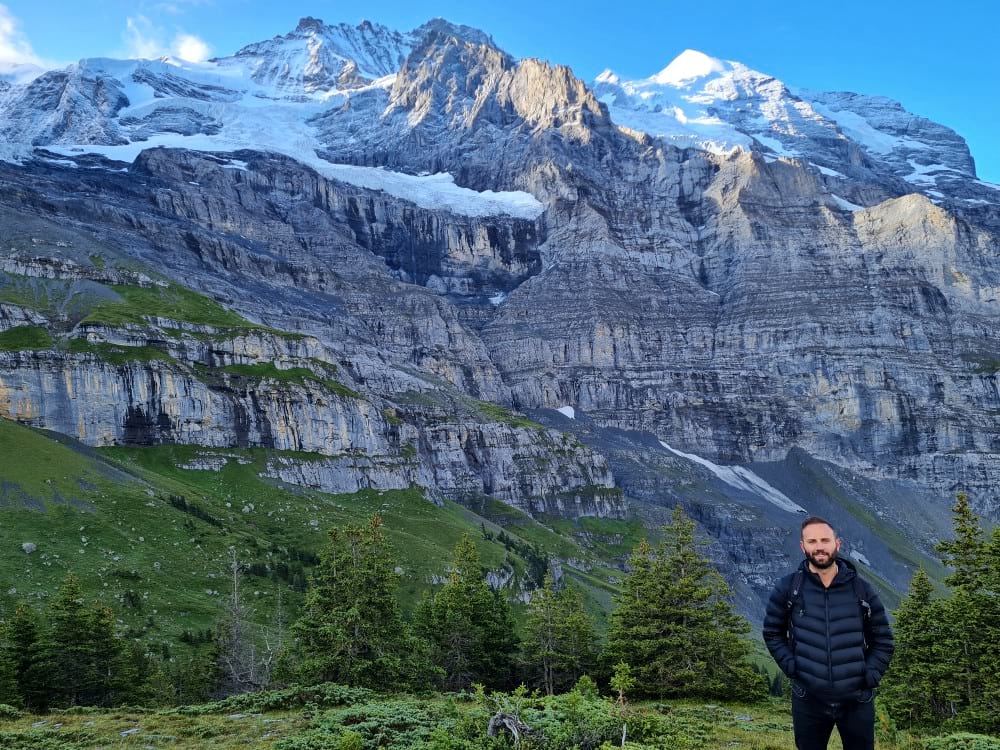 I’ll excuse the fact I had to (briefly) wear a jacket on a summer holiday, given the natural beauty on show in Switzerland.

Switzerland has long had a reputation for being boring. And having visited many times, I have to concur with these sentiments. Everything is perhaps just a little too clean cut. Everything is efficient. Things happen on time. It’s clean. Crime rates are low. City streets are pristine. Swiss citizens are quiet but polite. There isn’t much drunken noise or disturbance in the evenings. People drive carefully (at least compared to the neighbouring French and Italians). 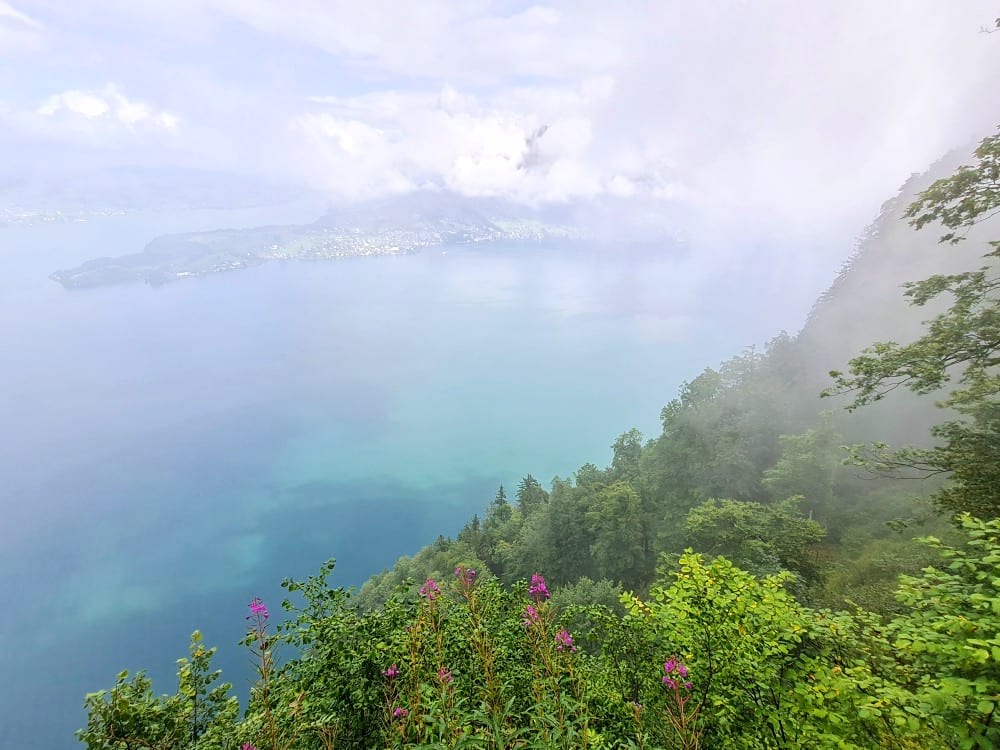 Lake Lucerne, through the clouds.

But maybe, perhaps, boringness is a sign of progress? Maybe boring is good? After all, the things I just listed about Switzerland are, on second reading, actually signs of very well-functioning, pleasant, and advanced societies. In other places, perhaps the threat of being mugged, gritty streets, and drunken locals, are in some way exciting? Perhaps late transport is thrilling? Perhaps boring simply means the absence of threat, and a feeling of security and safety? It’s my view that Switzerland is boring. But brilliantly so. There are few better places on Earth.

Previous Post: How to Meditate, Without Joining A Cult