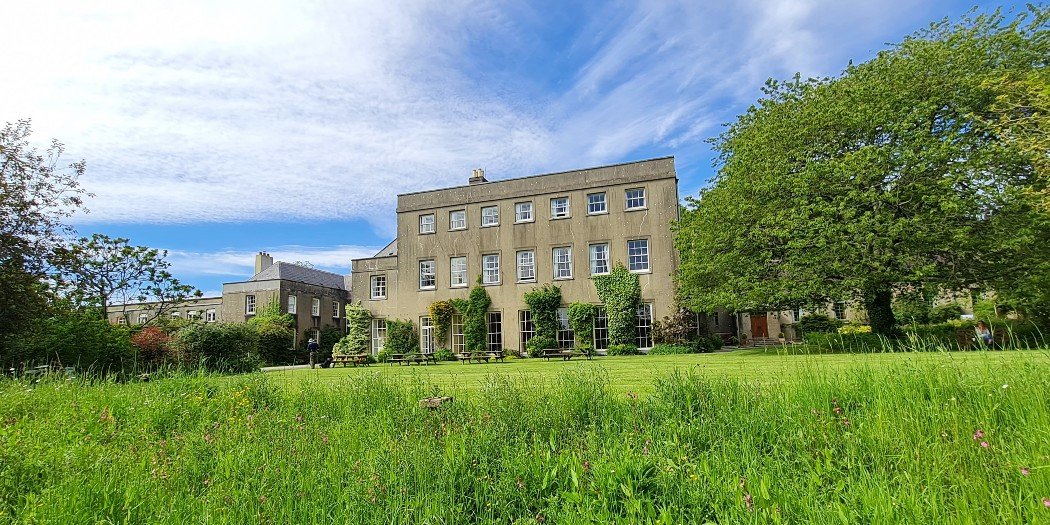 Just Shut Up! (At A Silent Retreat)

I’ve already written an article about my experience at a 10-day silent meditation retreat in India. But I’m writing another one, for two reasons: a) because the brutal and prison-like conditions described on the Indian retreat probably put some people off ever trying one, and b) this is my website so I can do what I want. This time, my aim isn’t to pretend that sitting for ten hours per day following your breath isn’t very difficult indeed. It is. It’s to explain why everyone should give a retreat a go once. And that it can be done in (modest) comfort, if that’s what you want. 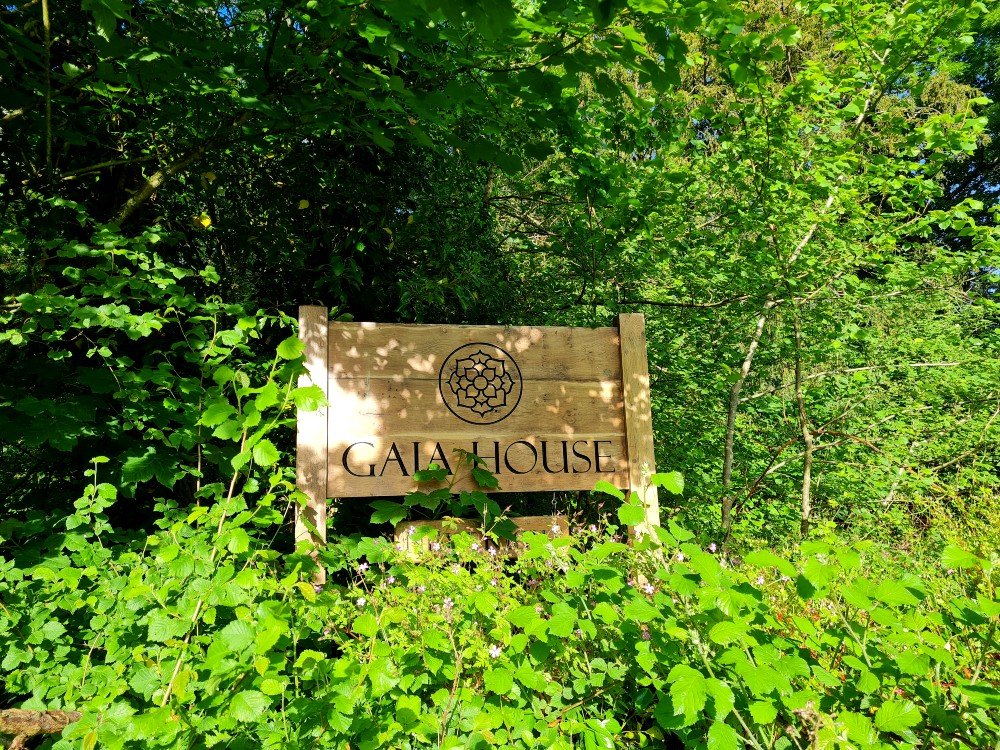 On average in the West, you get to live for around 4,500 weeks (if you’re lucky). Against this backdrop, spending a week unplugging and trying to understand how your brain works is probably a good investment. After all, we arrive on this planet. We find ourselves in charge of the most complex instrument in the known universe – our brain. Some scientists think the mulchy pink goo in each of our skulls has more computing power than all of the world’s computers, combined. And yet, we don’t get taught how to use it. Instead, most of us employ this phenomenal tool to watch funny cat videos on Instagram. In the rare moments we aren’t doing this, we worry incessantly about everything for the duration of our lives. Attending a silent retreat will help you understand your mind, allowing you to lead a healthier and happier life. It’s as simple as that. 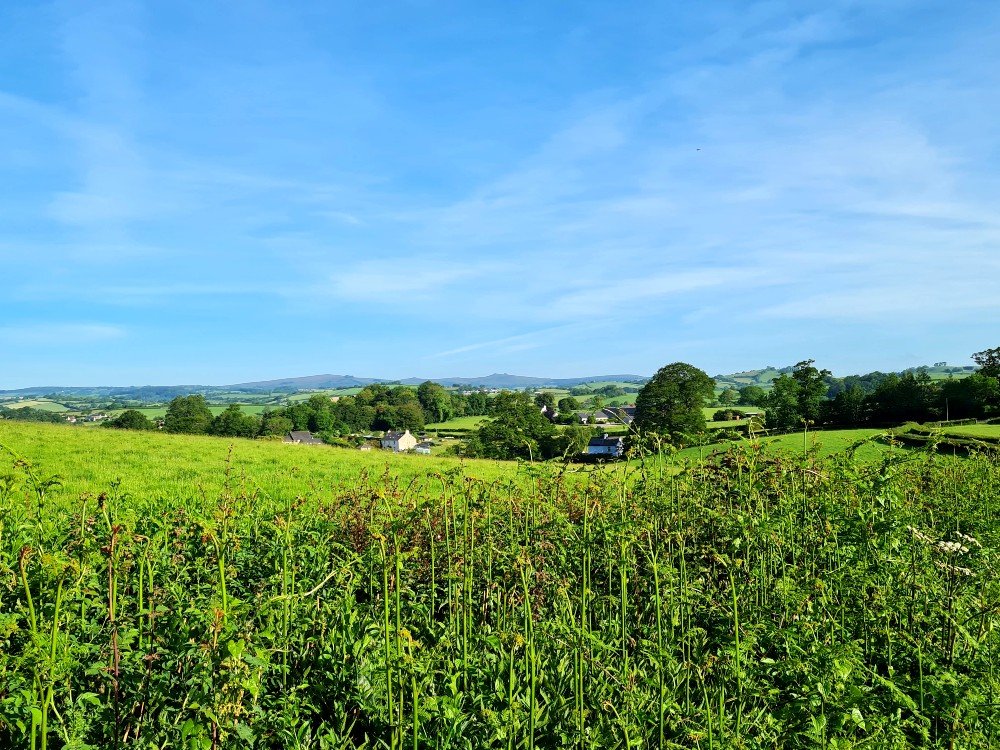 Beautiful Dartmoor National Park on the horizon, in Devon. Unlike a few of my previous retreats, we were allowed out of the grounds for walks (which in retrospect doesn’t sound like a huge luxury, but definitely was compared to other retreats I’ve been on).

I drove down through the ridiculously picturesque scenery of South West England. Driving through the winding country roads of Devon, with birds chirping, passing impossibly twee little villages, and surrounded by thousands of shades of green, it felt good to be out of the city. With the brooding and dramatic tors of Dartmoor National Park looming on the horizon, it’s a spectacular part of the country. I saw a sign for ‘Gaia House’, which was to be my home for the next week. My nerves jangled. 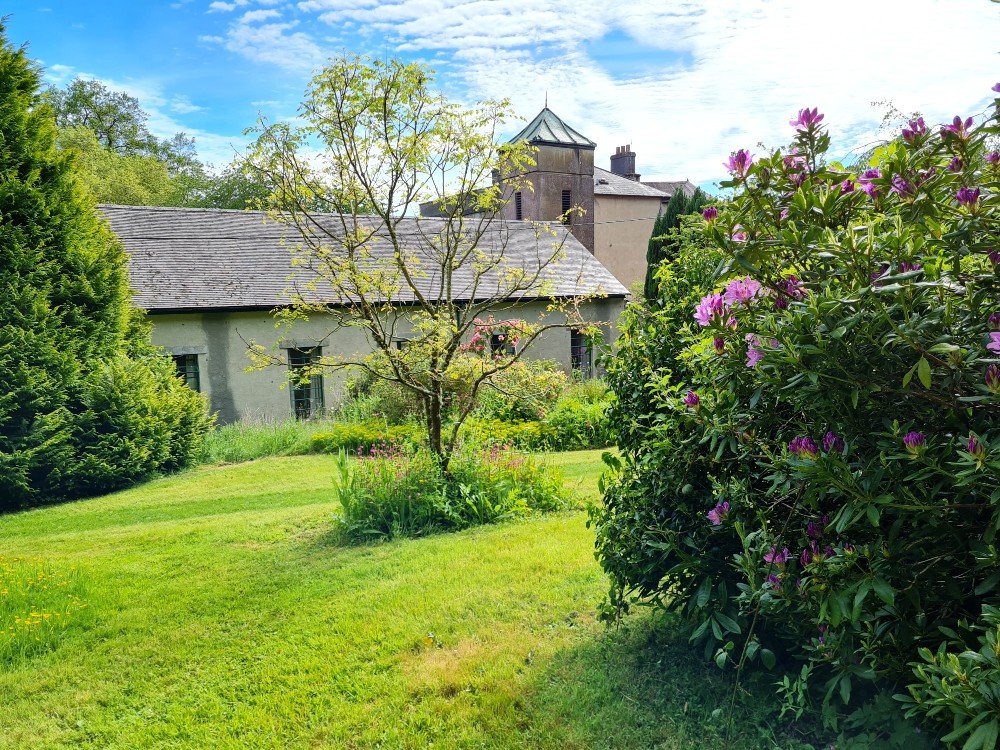 Gaia is very pretty, particularly the gardens. The house could do with a lick of paint, but hey.

On first viewing, the house looked grand, but perhaps a bit dilapidated. I messaged my girlfriend a picture of it and she said it looked “a bit like an asylum”. I laughed it off, until I found out later it used to be a convent. Which, from my understanding, is basically the same thing as an asylum, except at a convent there’s a bit more of a “God is great” kind of vibe.

As I grabbed my stuff from the car and looked at the beautiful garden, I saw a handful of people walking very slowly or even standing still. It was a bit spooky. They were perfectly silent. Think Shutter Island, if you’ve seen that film. Having been on several silent retreats, I guessed the retreatants were probably just doing a walking meditation (where you pay attention to every single aspect of walking). But still, it was a gentle reminder as to why these retreats have an (unfortunate) ‘woo woo’ reputation.

For the next seven days, my daily routine followed a similar format. Compared to my experience in India, it was like being on a holiday camp. I had to wake up at 6.30am (instead of 4.30am). Breakfast was served at 8.00am (and there was enough food to go around). Over the course of the day, I would sit in the meditation hall following my breathing for a mere ten hours (instead of 16 in India). Lunch was at 12.30. And I was even allowed to eat dinner! In India, the last meal of the day was served at 11.30am. ‘Dinner’ in India comprised a glass of lemon water and was usually accompanied by a rumbling belly. We were told a full belly hindered meditation, which sadly, it does. 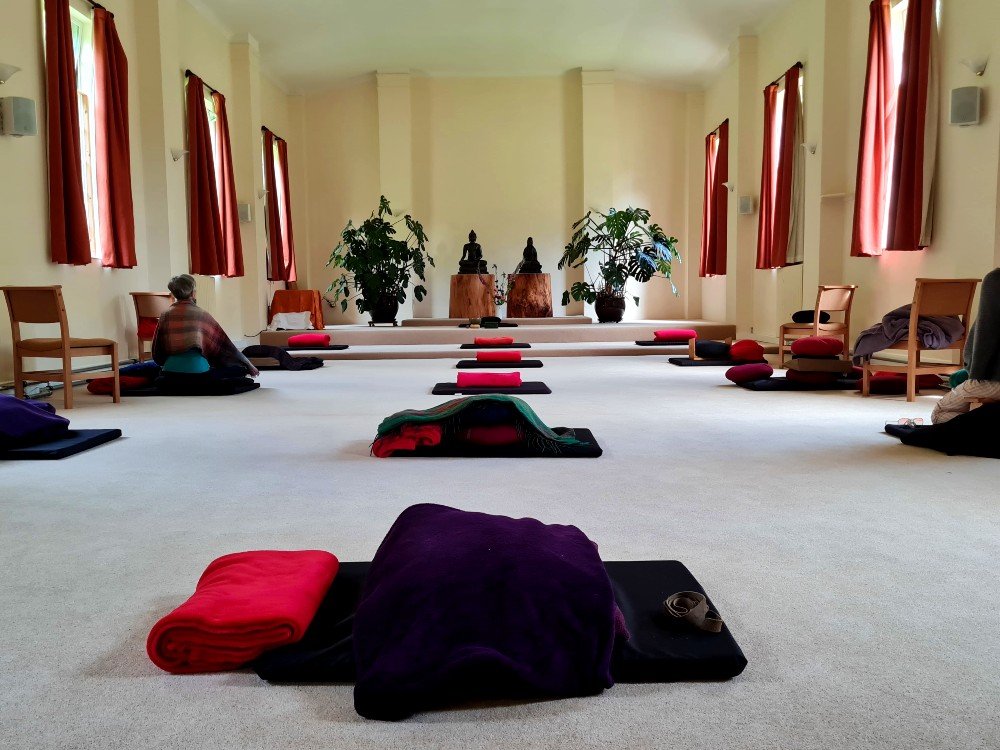 The meditation hall. It had plants, which I liked. It also had Buddha statues, which I was less keen on. Although some people who attend these retreats are Buddhists, the teachings are secular as are the majority of the retreatants.

Obviously, there wasn’t any talking throughout the retreat in Devon. People always ask me if this is the most difficult aspect of a silent retreat, but truth be told, it’s the best. At a retreat where you know no-one, sitting down to dinner safe in the knowledge you don’t have to make any boring small talk is liberating. And as a British person, being temporarily freed from saying “please,” “thank you,” and “sorry” about a million times a day actually feels quite good.

Method Behind The Madness?

Aside from less inane chatter with randomers, there are other good reasons for the silence. It allows you to focus even more deeply on your practice, without distraction. At Gaia, we were allowed to read as well. Well, only books on meditation. But I can’t tell you how enjoyable reading is when you don’t have access to your phone, TV, other human beings, or any kind of the normal sensory stimulus we use to distract ourselves from the tyranny of our unruly minds. 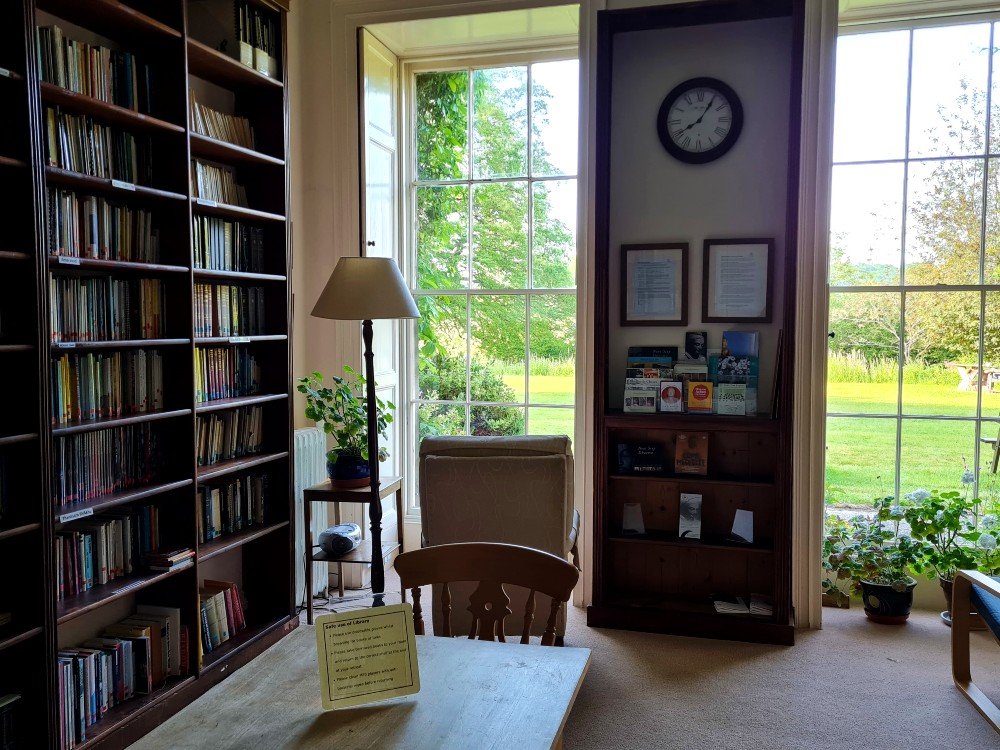 The library. I read Gazza’s biography on the retreat. Only joking, you won’t find anything here not about meditation, and most of the books were ancient.

Try this. Sit still. Follow your breathing. And see how long it takes for you to become distracted. It’ll be a few seconds at most. And when you’re distracted, you’ll notice the thought is rarely a pleasant one. Over 80% of our thoughts are negative, and 95% are repetitive. We’ve evolved to have brains hardwired for negativity, because there used to be the not insubstantial threat of being eaten by some horrible animal at any time.

Quieting and taking this inner narrator less seriously are the main aims of meditation. After hours of meditating at Gaia House, I was able to have some amazing experiences of what life is like when thinking slows or stops. Remember, much of our conscious ‘bandwidth’ is taken up by thinking. When thinking stops, our mind has more room to take in data from our senses (sight, touch, smell, vision). 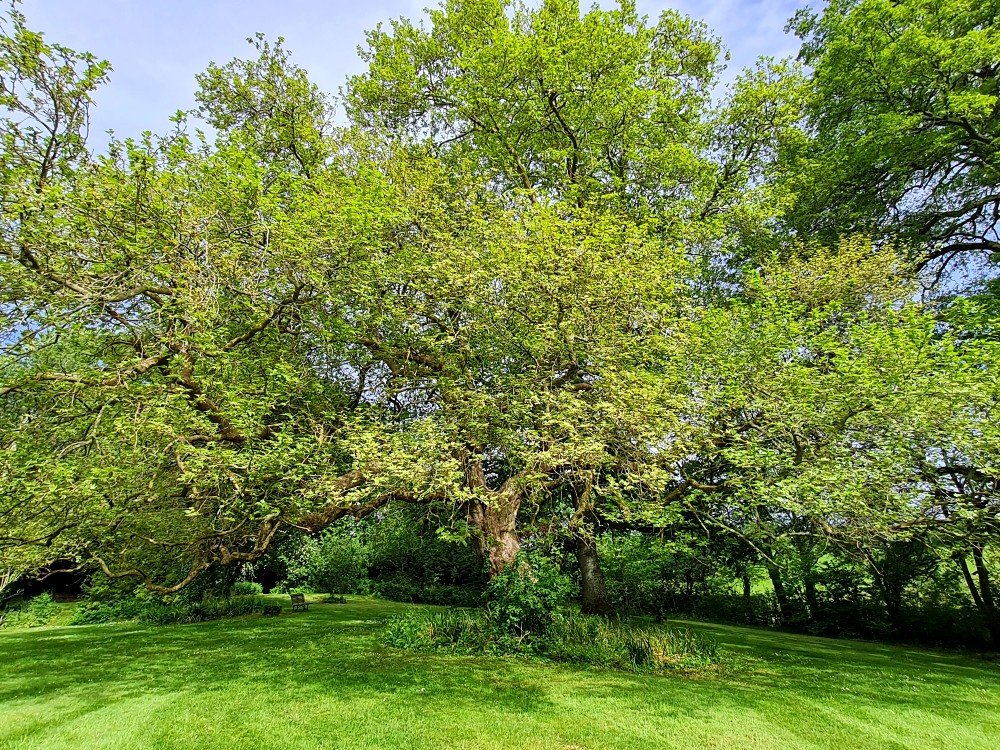 Trees become much more interesting things when you have nothing else to distract you.

For this reason, walking in the garden like a character in Shutter Island was incredibly enjoyable at Gaia House, as it was on other retreats. The nature on show seemed ‘turned up’. Trees were more beautiful. The sounds of nature were more alluring. It was as if colours were more vibrant and my vision was sharper, because they both were. Eating was also unbelievable. We had an apple crumble one day as a treat. Each chew was a euphoric explosion of taste and pleasure. Even plain foods tasted amazing. Eating is a whole different experience, when you dare to look away from a screen and actually experience what’s happening.

I can promise you, in the moments on retreat where thinking slows to the point of stopping altogether, you’re likely to have some of the most blissful and relaxing experiences of your life. Yes, more than even on a luxury holiday to some tropical island. Because on that tropical island, you unfortunately still pack the same neurotic mind which chases you out of bed in the morning and makes it hard to sleep in daily life. At Gaia, and other retreats, you learn first-hand that the quality of your mind determines the quality of your life. Learning to be present is the path to happiness.

As the retreat drew to a close, I felt incredible. But this isn’t really what it’s about. Gaia – which teaches secular meditation (I don’t believe in sky pixies) – gives you the chance to hone your meditation technique. Much more than if you’d just been doing a few minutes on an app. To put the hours in, learning to train your mind. Which, like going to the gym, is often very hard, tiring, and painful. 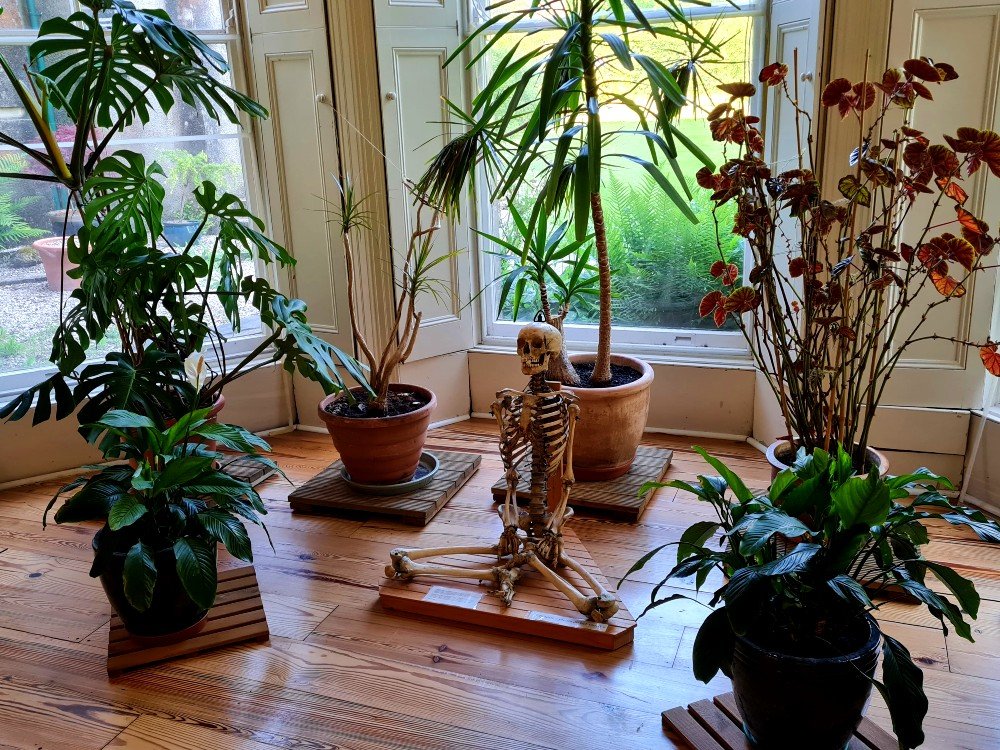 Gentle reminders about our impending demise were dotted around Gaia. If you want to be happy; remember your death. When you remember that you only have a fleeting moment to be on this planet, daily niggles and worries seem much less important.

But for those that persevere, and practise daily, so many benefits await. Lower levels of stress, anxiety, and a slower degree of age-related memory loss. Higher productivity, focus, and an improved immune system. Improved academic performance and creativity. I’ve actually written an entire article on all of the scientifically proven benefits of meditating. In the simplest way possible, meditation is an unparalleled tool which helps you achieve the main goal which all humans pursue in their lives: happiness. A retreat will give you the space and time to supercharge your practice. You have 4,500 weeks to play with (hopefully); a one-week meditation retreat is surely worth the gamble?

I teach Corporate Meditation Workshops and One-to-One Meditation Classes, click the ‘Book Me’ link to find out more.