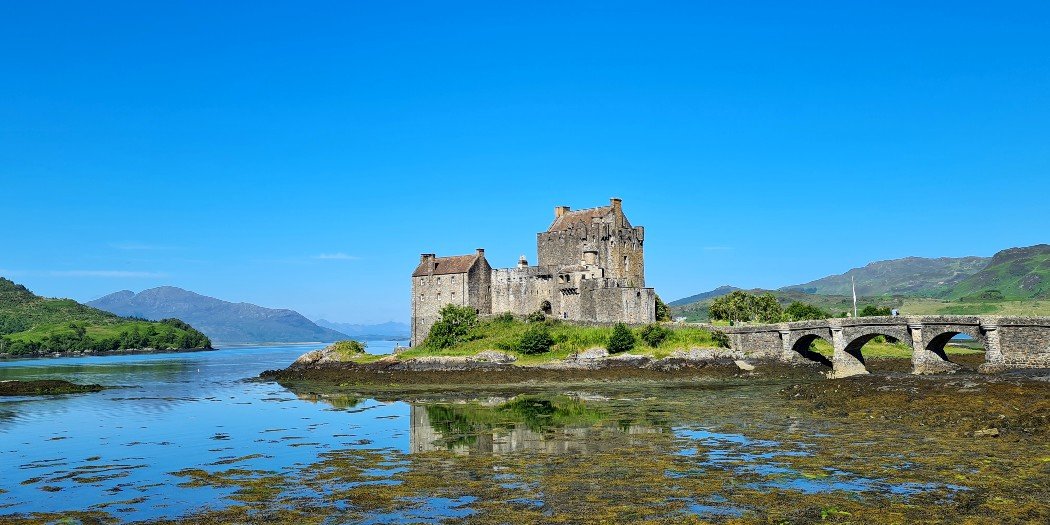 Haggis. Whisky. Tartan. Kilts. Rain. Epic mountain scenery. Football hooligans. World-famous inventors. Humour. Lochs. All these stereotypical Scottish things were whirling around my head as I drove across the border. Driving along a winding country road, in the middle of the rural and remote border regions, all that signified I’d left England and entered Scotland was a tatty old sign. It was as if I’d just entered a motorway service station, rather than a nation. 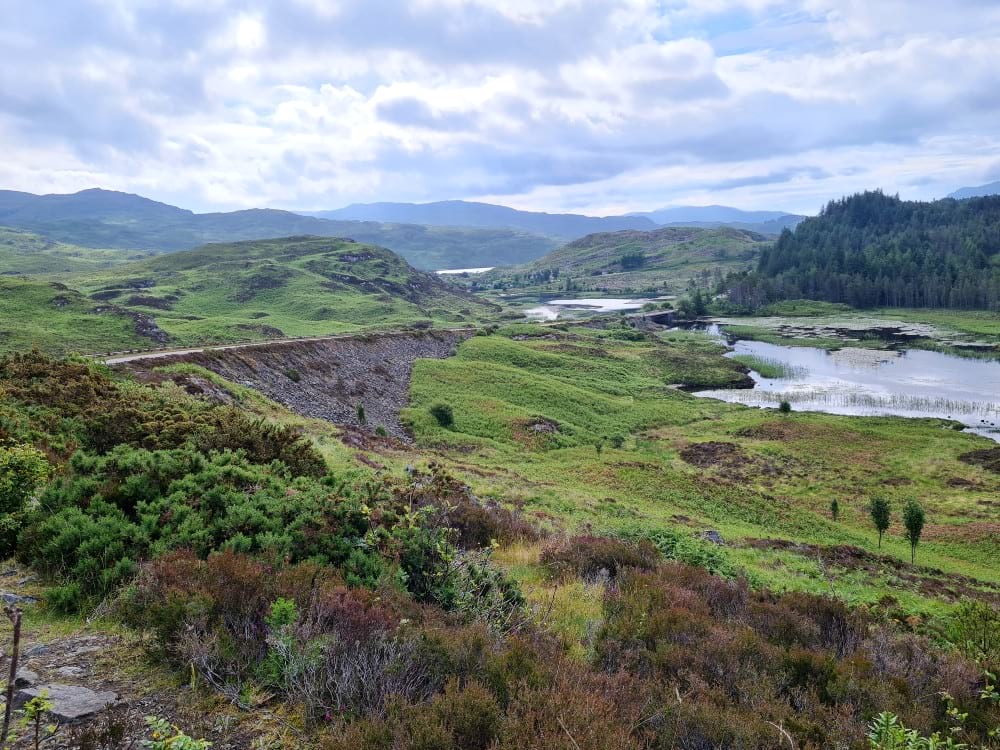 Beautiful Scottish scenery. Kind of the norm in this part of the world.

As I crossed the border, the giant elephant in the room of my mind was shouting louder and louder: “independence”. I’d been at Hadrian’s Wall earlier that day. It struck me as a shame that there’s still a push to basically rebuild a wall not needed since the Romans wanted to keep barbarians out of their empire. My heart ached a little. 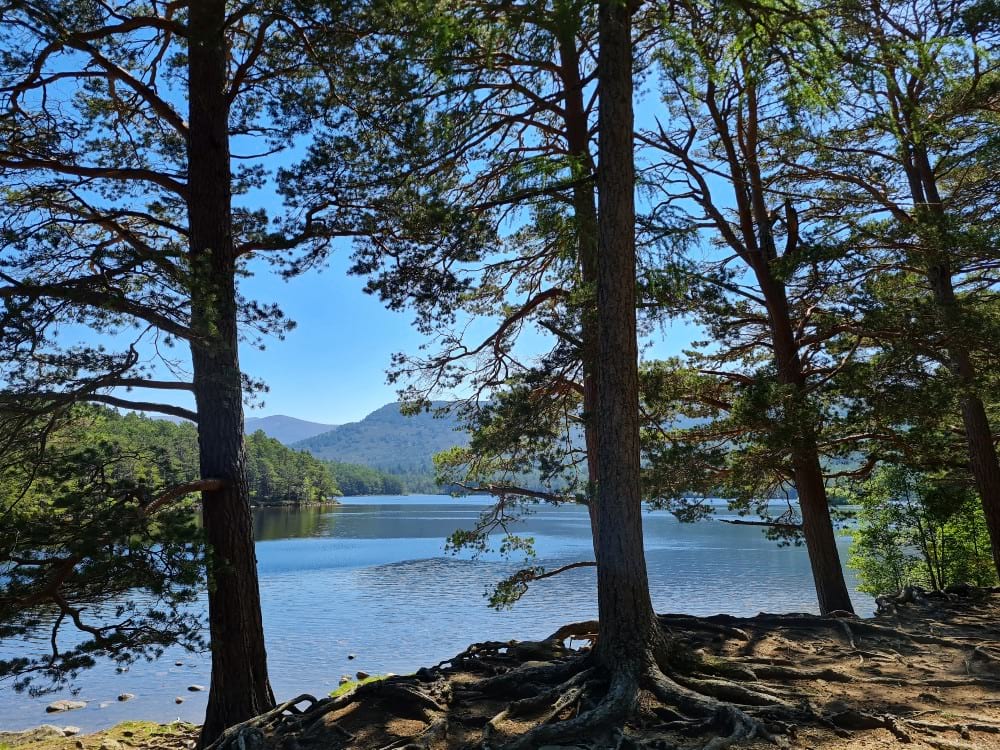 The Cairngorms National Park, around an hour north of Edinburgh.

As an Englishman, I probably have no right to comment on other nations’ constitutional issues. But I’m going to because a) I want to and b) the future of Scotland has a massive impact on our shared nation, the UK. In 2014, Scotland voted to remain part of the UK by 55% to 45%. A thumping win. Particularly given that 800,000 or so Scots based in England (around 15% of the population) – who most likely would have voted to stay – were disgracefully not allowed to vote in the poll. But since then, xenophobic supervillain Nicola Sturgeon has been banging the drum for independence as if her life depended on it. Given that she’s droned on about it for the last few decades like a broken record, in a way, her life probably feels meaningless without it. 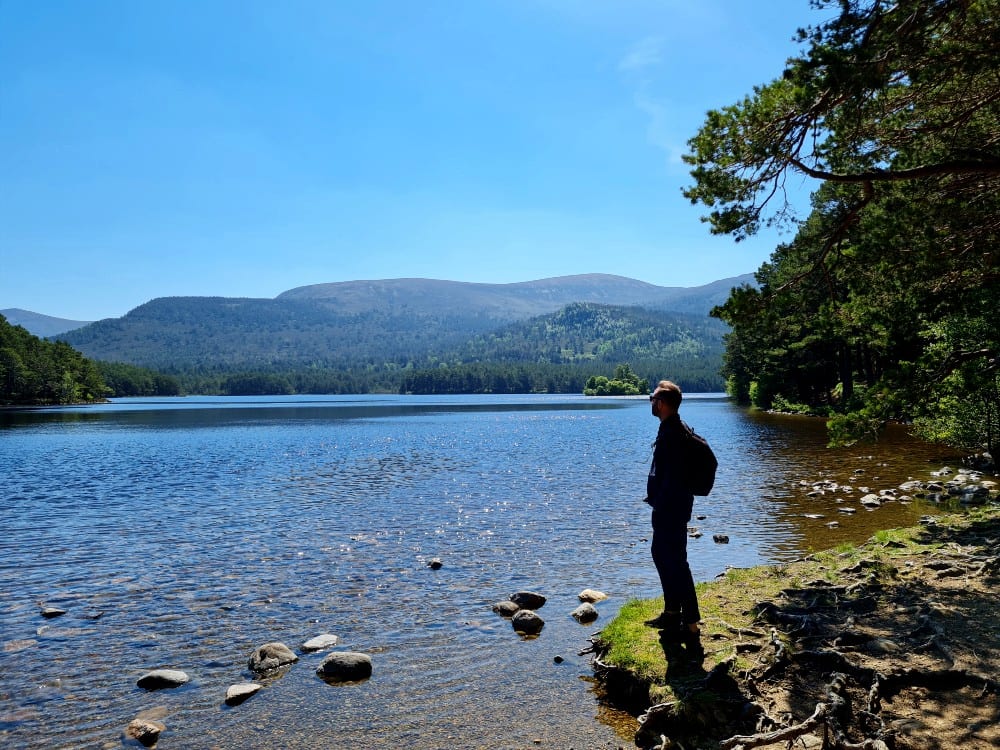 The Cairngorms National Park. And a man stood contemplating life in a normal and totally non-posed way.

Look, my issue isn’t with Nicola, per se. It’s just the primitive and frankly deluded power that patriotism has over populations, all over the world and not just in Scotland. We Brits voted to leave the EU because of such a delusion. I look forward to a time when people across the world stop believing that the answer to every single question in the world (and in their personal lives) is to retreat into “my country is the best” nationalism. 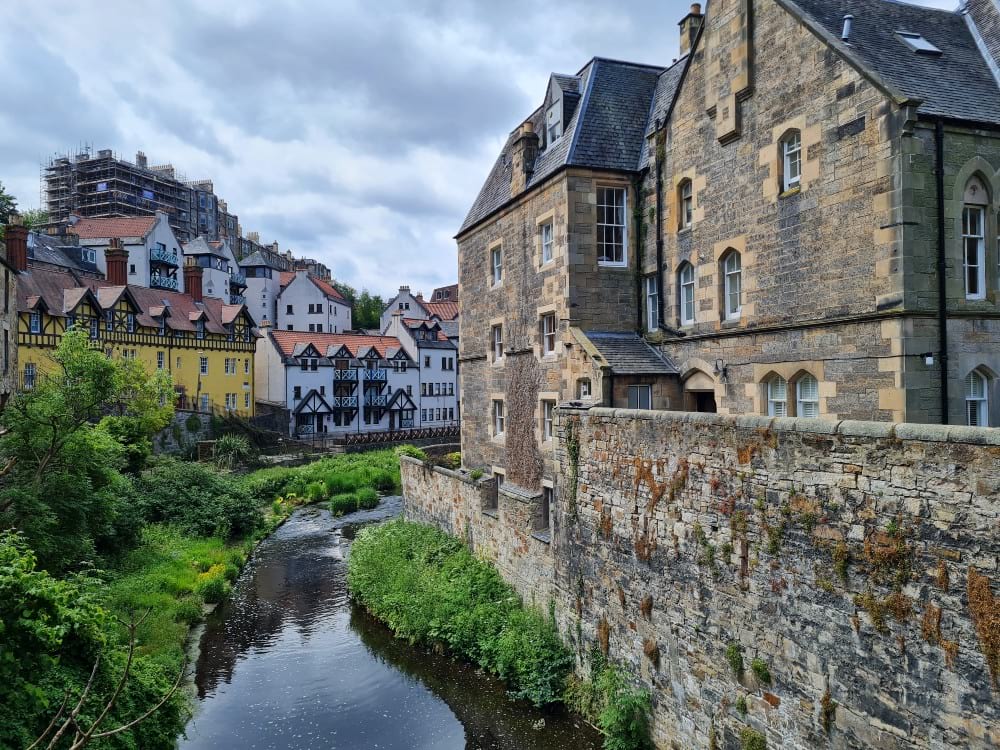 The same people who voted for Scottish independence will years later probably support independence for their city, then their street, and then their house. Until it’s just them; in splendid isolation from the rest of humanity. To nationalists everywhere, just remember: you are a slowly decaying ape, stuck on a rock careering through the endless vastness of the universe. You are a species of animal, a human. As we all are. You are not defined by the imagined chunk of land you happened to be born in. In the context of the cosmos, you and ‘your’ country simply don’t matter. Get over it.

Okay, that rant is now out of my system. The truth is, I probably feel so passionately about the issue because I love Scotland so deeply. I’m proud it’s part of the UK and want it to stay that way. And as we drove up through the border regions, the things that make Scotland so great and make me love it sidled past us. Increasingly impressive mountains. Pine trees. Quaint little stone-built villages. The feeling of emptiness and ‘space’, which is so much harder to find in England (England squeezes 55 million people into an area not much bigger than Scotland, where just five million people live). Stopping at a service station to buy fuel, even the people working the tills have a dry sense of humour that can’t help but make you smile. It’s special. 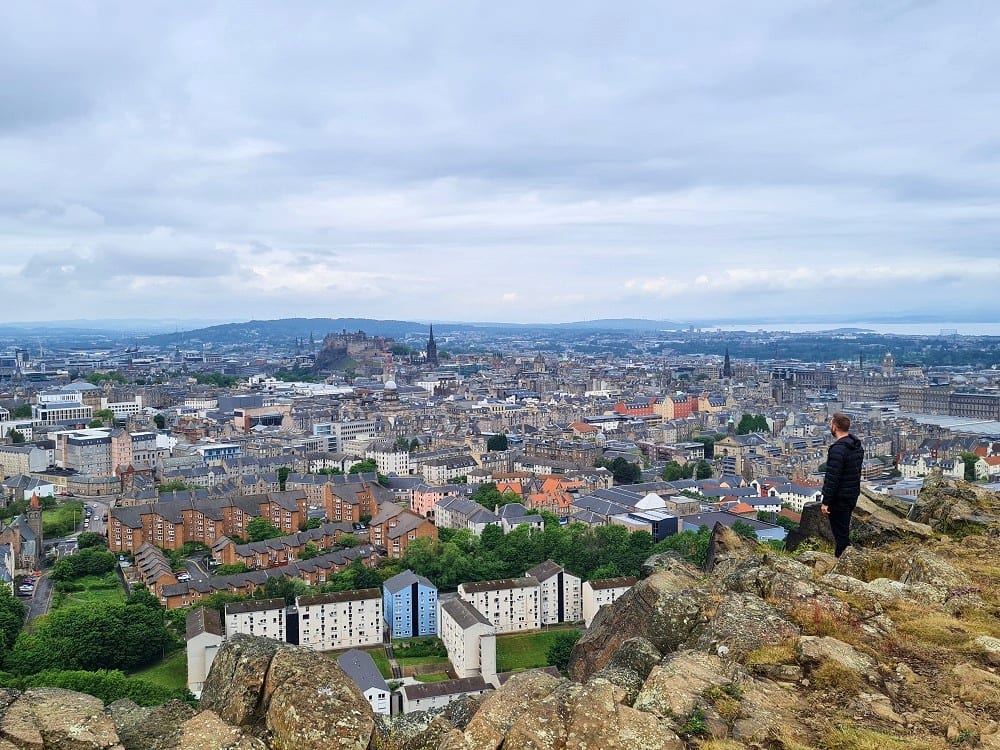 Edinburgh, viewed from the top of the Crags.

After a few hours, we reached Edinburgh. Edin-burg, as Americans call it, is one of the world’s most beautiful cities. It’s astounding. All ancient, moody castles, and ramshackle city streets. Blackened spires, and opulent Georgian splendour. Edinburgh is one of the most photogenic cities on the planet, and anyone who visits is sure to love it. I’ve visited over ten times and its beauty still catches me off guard. Edinburgh’s so ancient and mysterious that you can see how JK Rowling wrote the Harry Potter series while being based here. Even though, as I dipped into local coffee shops to grab espressos, I doubted each one’s exaggerated claim that she definitely wrote all of her books while sat in this particular café. 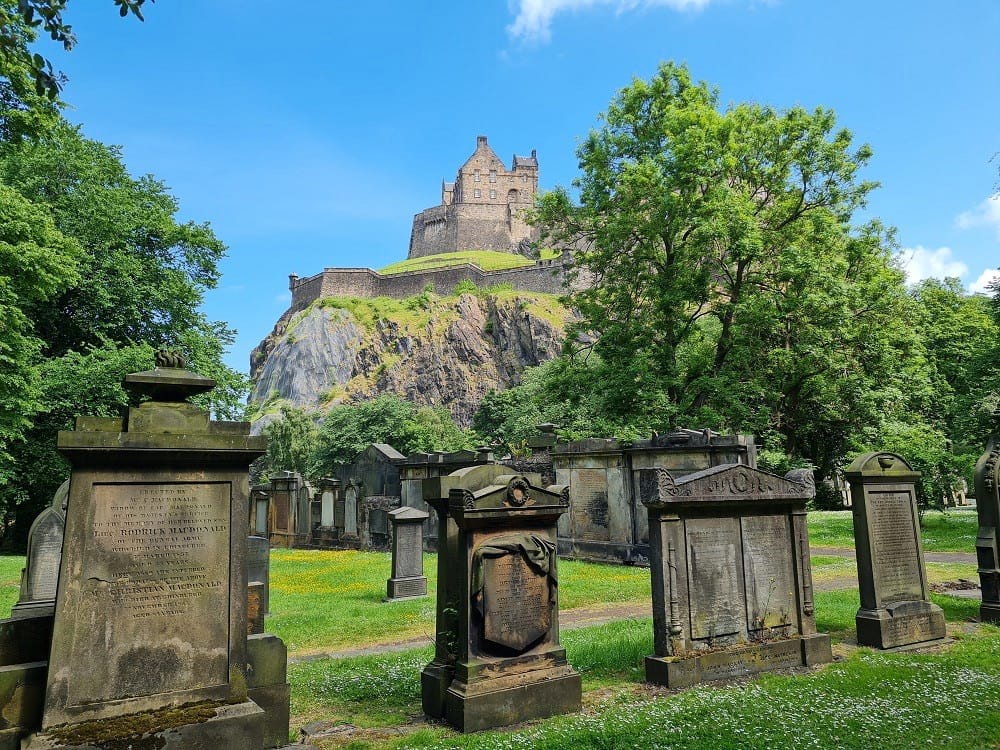 There’s been a castle here in Edinburgh for over 800 years. And you can see why. I for one wouldn’t fancy attacking anything on top of a cliff that big. Or anything for that matter, fortunate as I am to live in the tiny span of human history where men haven’t been forced to kill each other en masse in stupid battles.

Compared to my previous visits to the city, however, Edinburgh felt eerily quiet. Without foreign tourists and no Edinburgh Festival, the streets were much less busy than usual. “Perhaps this means there won’t be a fucking annoying bagpipe player on every street corner,” I said smilingly and hopefully to my girlfriend. With a spring in my step, I needed to walk only a few more metres before my worst fears were realised. The off-key, painful, droning sound of bagpipes attacked my eardrums. As they would for the remainder of the time we spent in this incredible city. After a few days, this made it easier to set off north, where Scotland really starts to become truly wild. 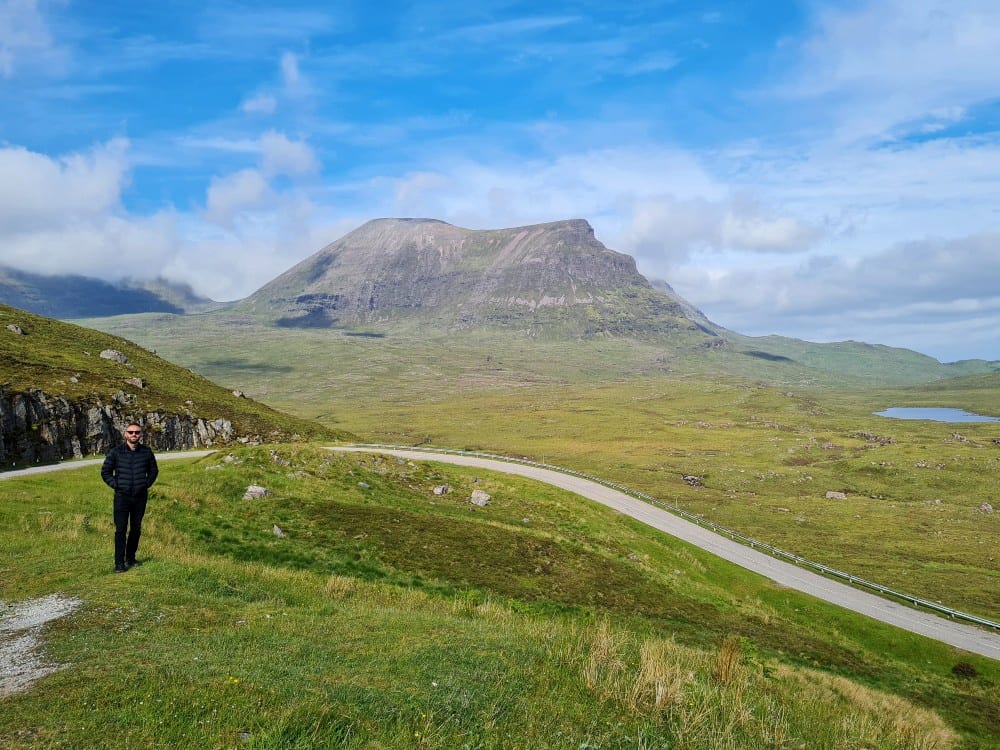 North Coast 500. Wearing all black is not obligatory.

The north of Scotland is where things start to get really epic. Setting off from Inverness, we embarked on one of the most spectacular drives in the world: the North Coast 500. While it would’ve been fitting for me to take the Proclaimers’ advice and “walk 500 miles”, I instead did the journey in a car. Sorry to burst your bubble. As we drove further north, we were greeted by stretching vistas, craggy Scottish mountains, and azure blue lakes. And a hell of a lot of history, too. Aside from getting weirdly used to passing villages so quaint they look like they’ve not changed for centuries, and epic castles, I learnt that Scotland’s connection with Scandinavia runs beyond people with red hair. 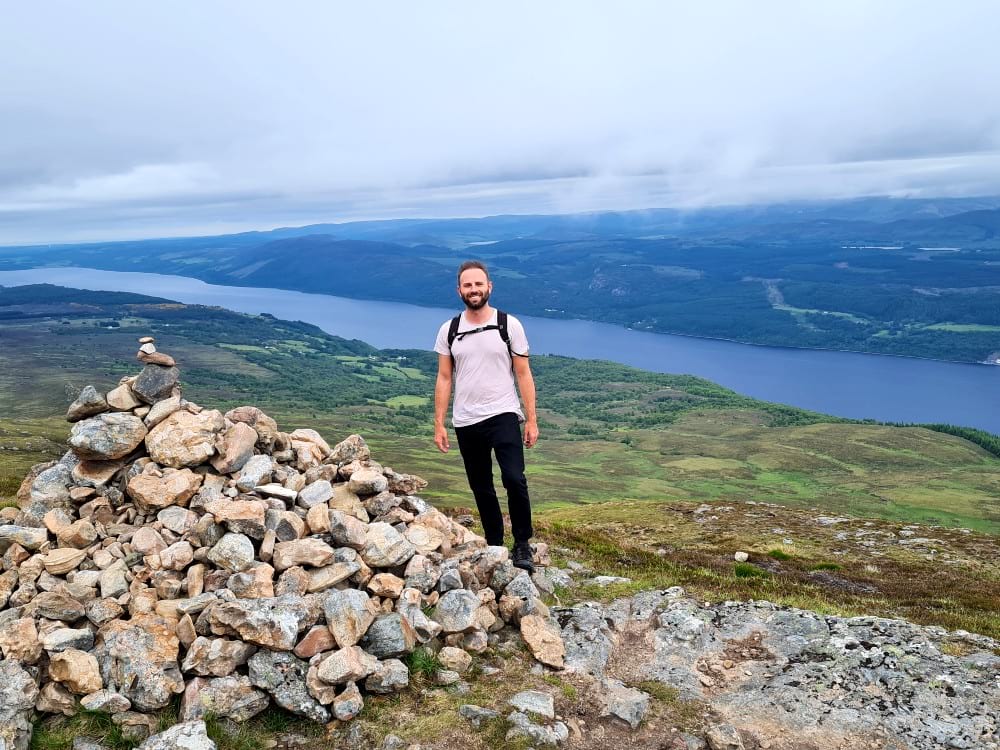 Like Bethlehem, Loch Ness is one of few places on Earth which is famous due to a fictitious fable. Over the past hundred years there have been various sightings by crackpots of ‘Nessie’. Monster or no monster, Loch Ness is worth visiting in its own right. From the top of Meall Fuar-mhonaidh (699m), you get stunning views of the entire loch.

Up in the wet and remote Orkney Islands, I had a glimpse back into Scotland’s weird and wonderful Norse history. The Orkney Islands are only just off the northern coast of Scotland, but they feel like they should be hundreds of miles away. All the names here are in Norse, a reflection of the fact that the islands were actually part of Norway and Denmark until the 15th century. Hence, place names like Qouyloo, Burray, Orphir, and of course, Twatt. 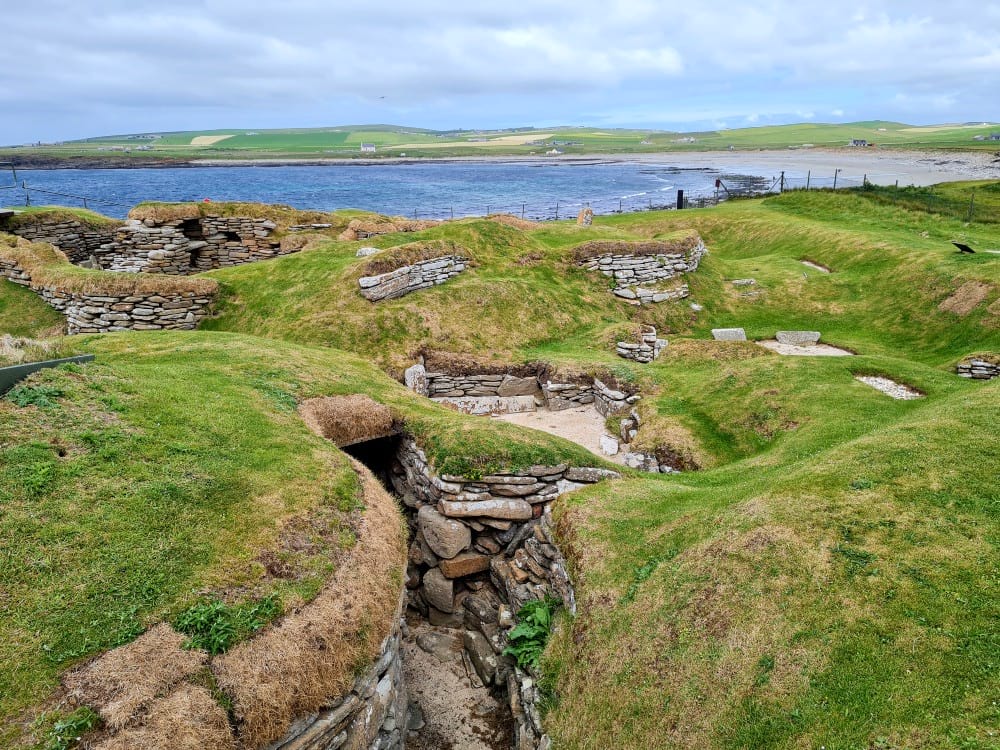 A brief glimpse into neolithic life at Skara Brae.

Skara Brae is a 5000-year-old neolithic settlement. It’s one of the best-preserved neolithic sites in the world, and implies our neolithic ancestors lived lives which were perhaps not as basic or as primitive as we’re normally led to believe. They would’ve still been boring, though. And very cold, if you’d taken the bizarre decision to live in such a windy and icy place. There’s also the Ring of Brogdar, a Game of Thrones-sounding stone circle which smashes Stonehenge out of the water (for context: Stonehenge is one of the world’s most overrated monuments). 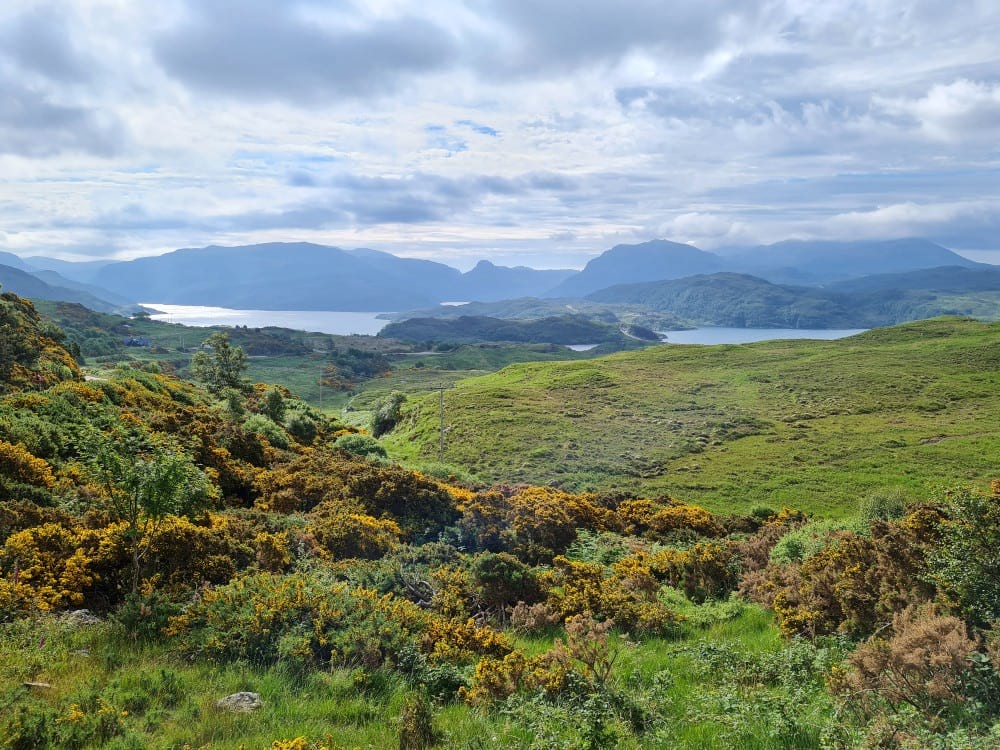 Epic scenery at every turn on the North Coast 500.

As we continued driving around Scotland’s northern coast, things got more and more beautiful. I came to the realisation that Scotland isn’t only beautiful in the context of being in the UK, or in Europe. Scotland is one of the most naturally beautiful places on Earth. While the mountains are small by international standards, they jut proudly out of the ocean, inflating their scale. When you have blue skies – as we miraculously did for the two week duration of our trip – I had the feeling I’d rather not be in any other place on Earth. Scotland melts the heart. 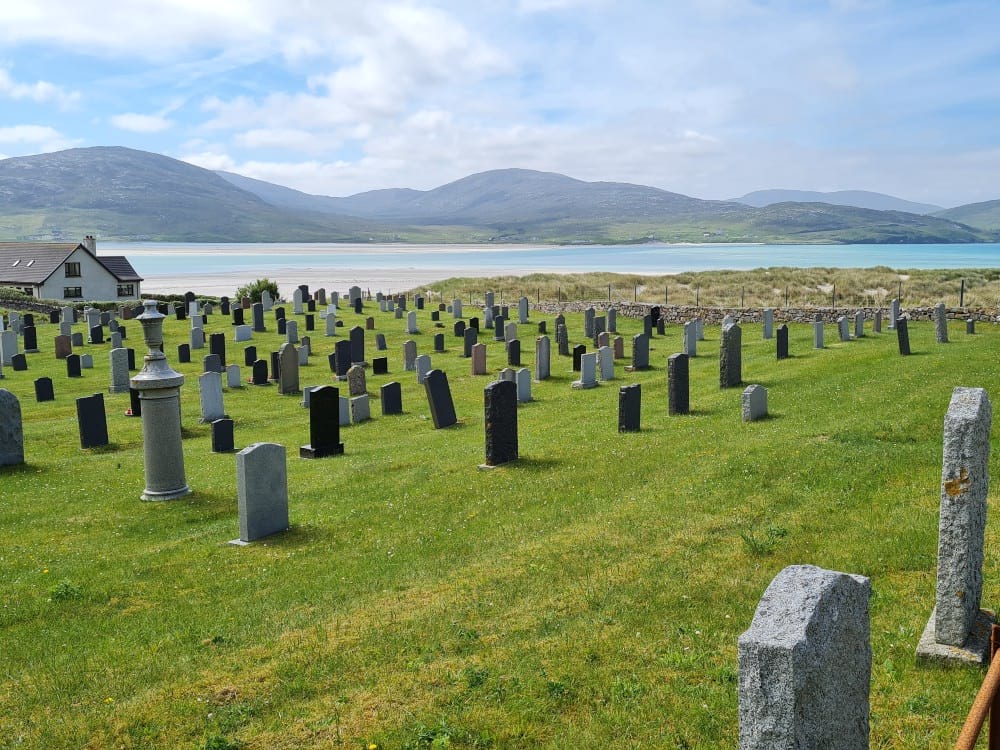 After driving through gobsmackingly lovely scenery for days, we finally reached Ullapool. This quiet and picturesque port town is the gateway to the Outer Hebrides. After a two-hour ferry ride where we saw dolphins out of the windows and lots of Scots eating very fried food inside the windows, we arrived on this windswept and desolate land. The Hebrides are so remote that they don’t even feel like part of Scotland. They have their own unique culture, and an accent which is completely distinct from the mainland. Like a fusion of Welsh and Glaswegian. They also have some of the most beautiful beaches on Earth. 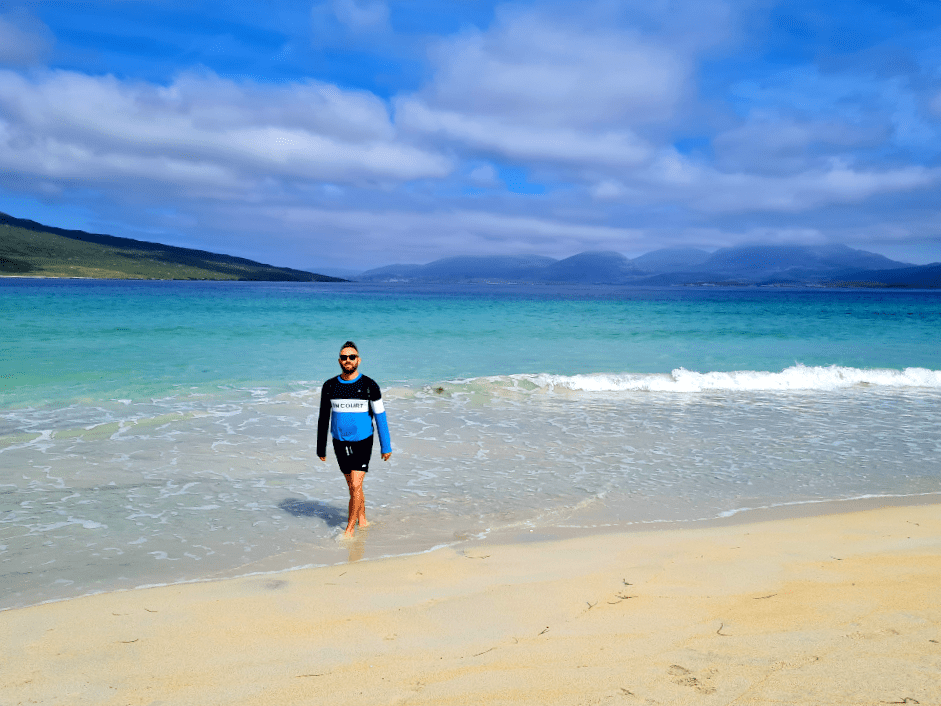 This is Scotland. Yes, really. Beaches on the Isle of Harris are out of this world.

I used to think that Scots who said things like, “There are beaches in Scotland which look like the Caribbean,” were probably overly patriotic, or deluded. Or both. But I was flat-out wrong. Luskentyre Beach – and many others on the islands of the Outer Hebrides – is magnificent. All white sand beaches and turquoise (but still freezing) water. 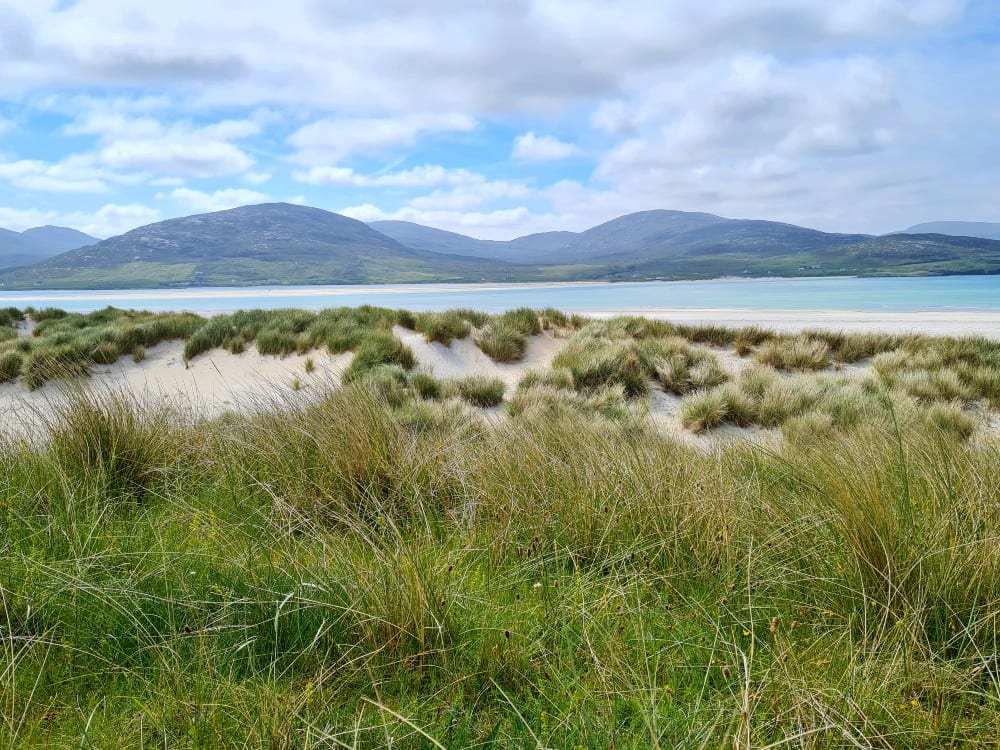 Thinking that things couldn’t possibly get any more beautiful, we took the boat to the Inner Hebrides, and to the Isle of Skye. It’s an island. But thankfully can be reached by road due to a bridge built in 1992. The scenery in this part of Scotland is simply superb. It’s raw, dark, and brooding. And on a completely different scale to things you’d see across the rest of the UK. It feels like Iceland, Patagonia, or even parts of the US. Which are big compliments. 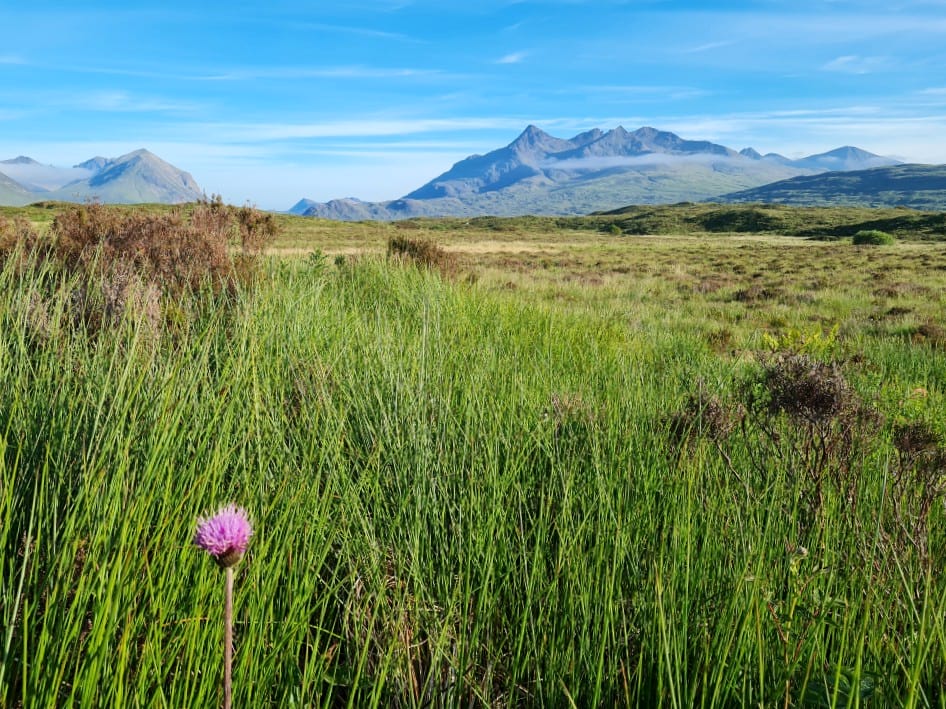 Blue skies on the Isle of Skye.

The sun shone for the entirety of our stay. So much so, that it’d make sense for me never to visit again, if only to avoid not seeing it in its full glory as I did this time. If one day you do the North Coast 500, make sure you visit the epic mountains of Glencoe, Glenfinnan Viaduct (i.e. the Harry Potter Viaduct), Eilean Donan Castle, and crucially, don’t blame me if it rains for the entirety of your trip. 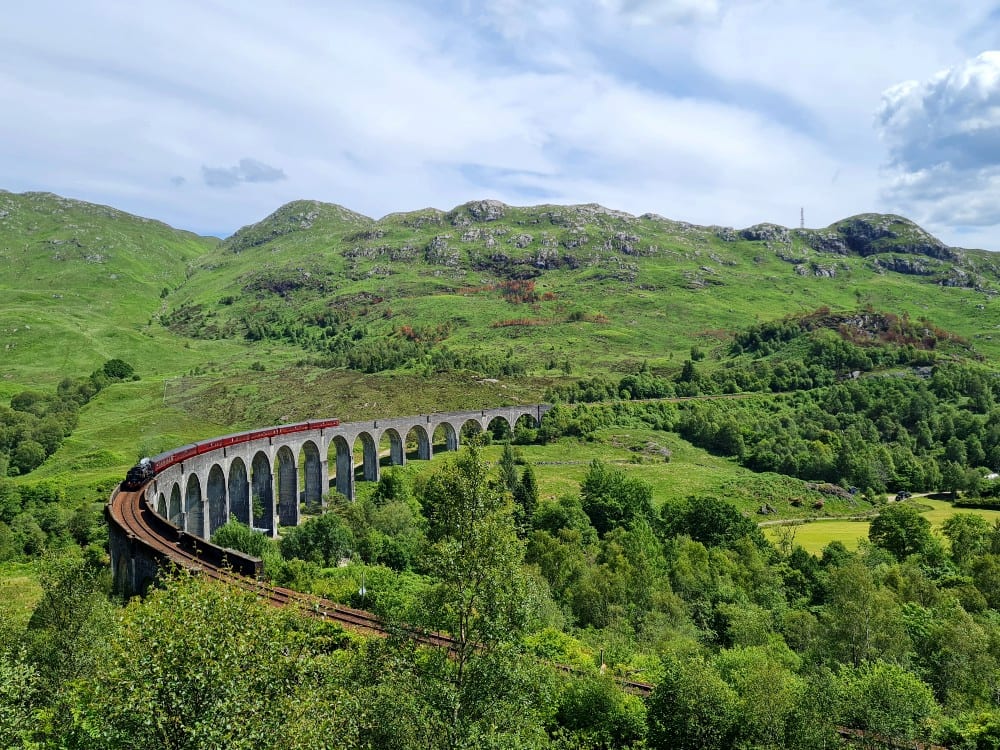 I waited 20 minutes for this picture. And didn’t see any sign of Ron or Harry in a flying car. The Glenfinnan Viaduct was a massive disappointment.

After a brief stop in Glasgow – one of the UK’s most fun cities filled with its funniest people – I stayed with some Scottish pals near placid and beautiful Loch Fyne. I waxed lyrical about how beautiful Scotland was, as if I was the first person on Earth who’d come to this realisation. They nodded knowingly. “Before visiting,” I said, “I’d heard the North Coast 500 would be ruined by midges everywhere, slow-driving caravans, and sideways rain falling 24/7. But it was nothing like this. It’s out of this world.” Sort of joking, my friend Angus replied, “Well, we have to say this stuff to keep you English in the dark, otherwise you’d all overrun the place! It’s our secret.” Fair point. In any case, I felt glad that I was one of the Englishmen who’d fallen through the net. And for now at least, I could to some degree still count this beautiful and magical land as part of my own home nation. Turns out patriotism is hard to completely disavow. 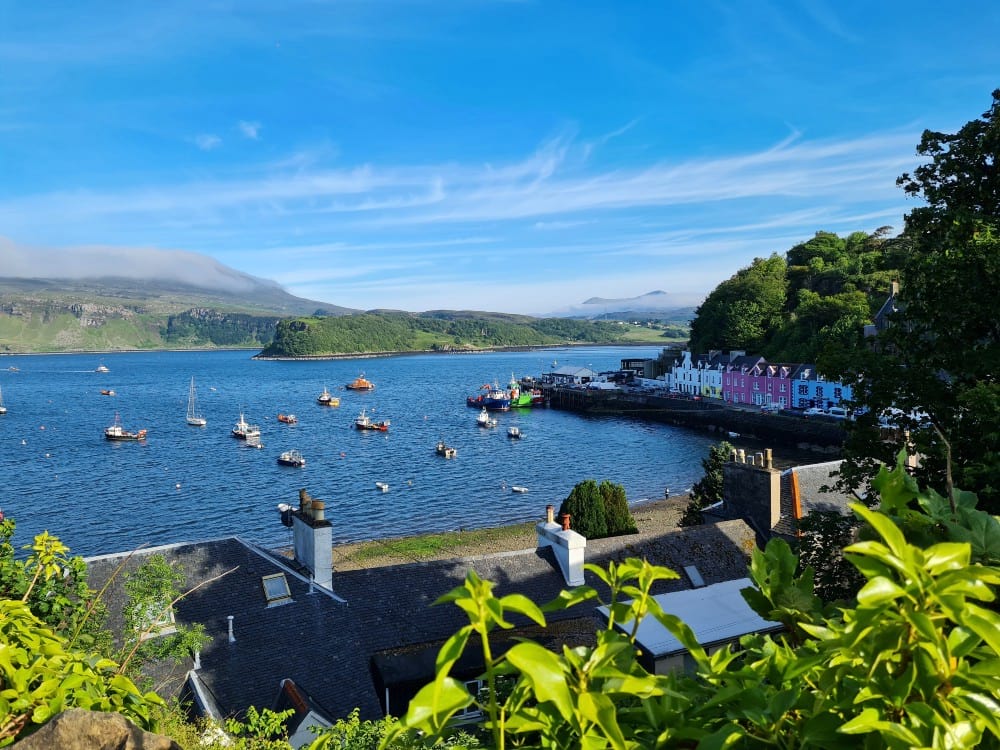 To any Scots reading this: we love you and want you to stay. Don’t listen to Nicola. 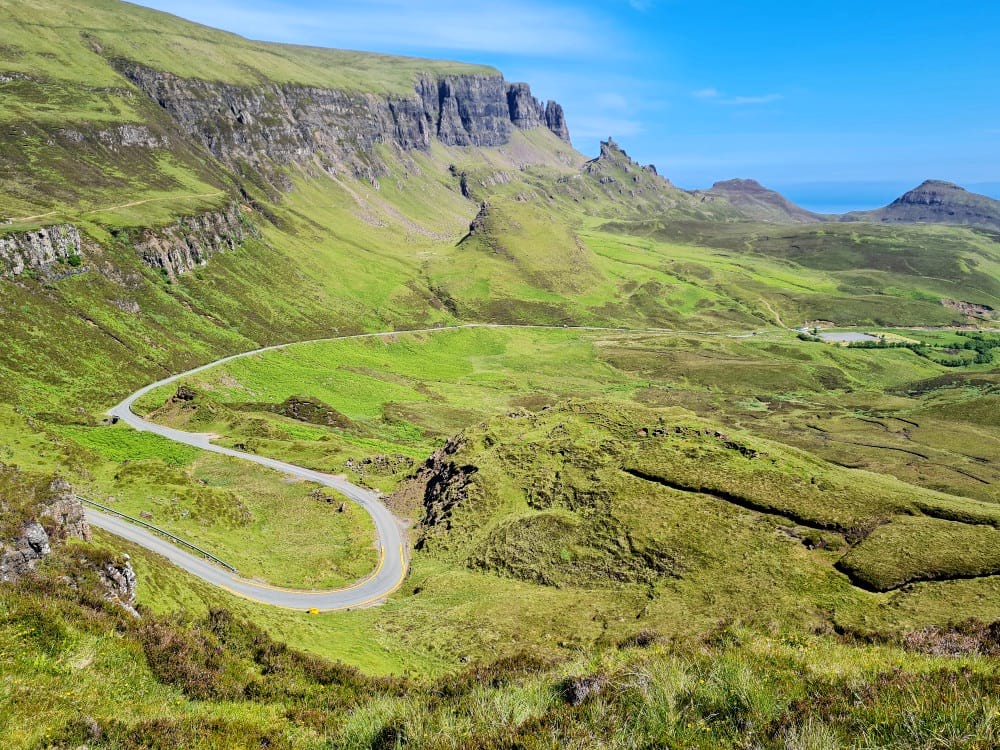 Next Post: How to Meditate, Without Joining A Cult