How Science Shows Us The Benefits Of Meditation

Each morning, first thing, I meditate. First, I light incense sticks and carefully arrange my dream catcher and crystal skulls, which of course have special healing qualities. I then align my chakras, and recite mantras to the mystical spirits who will guide me through my meditation ‘journey’ this morning. By looking deep within myself, I channel cosmic energy through astral oneness, becoming one with the creator.

Obviously, I don’t do this. It’s nonsense (apart from lighting incense, which is just objectively quite nice). I sit each morning with my eyes closed for 45 minutes. I try to follow my breaths, bringing my attention back to the breath whenever the mind wanders. It’s often hard and not always enjoyable. This is meditation. It’s decidedly unglamorous and doesn’t require me to believe in anything. And particularly the New Age mumbo jumbo which so many who attend yoga and meditation retreats like to peddle.

When I tell people I like to meditate and have been on silent meditation retreats, I wait for the inevitable raised eyebrows and confused look on their faces. It’s a face that always screams, “Hmm, I thought Mike was (fairly) normal, but he appears to have lost the plot… He probably has an unhealthy interest in star signs and talks about the Universe as if it’s a person.”

Thanks to hippies and the New Age brigade, meditation still has a massive image problem in the West. Apps like Calm, Headspace, and Waking Up have, thankfully, dispelled many of the unfounded and misguided beliefs about a practice which is massively beneficial. But there is still much more progress to be made in normalising the practice. So today, I’m going to talk about the scientific evidence which proves that meditating is one of the most sensible, healthy practices out there. While this is partially for your benefit, I’ll concede that there is also self-interest here. I plan to thrust this article in the face of any future eyebrow raiser, rather than have a doomed conversation to try to explain myself.

An Explosion In Research

Backed by better technology and its growing popularity, scientific research into meditation has exploded. In 2008, there were 82 academic publications written on mindfulness and meditation. By 2018, this number had increased tenfold to 842. Many of these journals point to long-term sustained meditation practice improving sleep, attention span, and academic performance, while lowering blood pressure, stress, and slowing age-related memory loss. The most exhaustive summary of recent scientific material was put together by Daniel Goleman and Richard Davidson in their fantastic book Altered Traits, which shows that long-term, sustained meditation practice can also cultivate qualities such as selflessness, equanimity, love, and compassion, while redesigning our neural circuitry.

Hmm, I bet the sceptic in you didn’t like seeing the words ‘love’ and ‘compassion’ in an article about science. Ok, let’s delve deeper into the science then. I’ll try not to lose you here, but I can’t promise anything. If some of it doesn’t make sense, perhaps your brain isn’t up to the task (maybe it could do with some meditation?).

Think of your brain as an ocean. It’s awash with repetitive patterns of neural activity, which we’ll call brain waves. I liked using the word “we’ll” just then, because there was a subtle implication that I’m part of the neuroscientific community (which, alas, I’m not). Normally, your brain waves are akin to stormy seas, full of worries about the past or the future. These are called beta waves. When you meditate, however, you start to calm the stormy oceans of your mind. As you drop into light meditation, the waves begin to slow and become less frequent. These alpha waves make you feel mentally and physically relaxed. As the practice progresses, the waves get slower and calmer still. Your brain generates increasing theta waves, which are associated with feelings of deep calm. It can feel really pleasant. 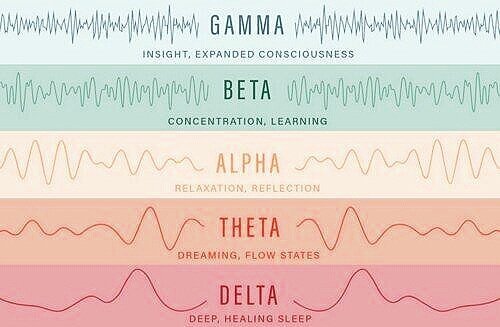 So what? Well, if you’ve ever felt what it’s like to have a stormy mind (you have), you might notice that it’s not that fun. Incessant thinking is the biggest cause of human misery, whether we recognise it or not. In calming the stormy brain waves of your mind, you feel much calmer and ‘thinking’ begins to slow or even stop. You would think that this all stops when you finish your session. But you’d be wrong again (for the light-hearted narrative of this article, I’m going to assume all of your views are wrong and you are, to all intents and purposes, an ignoramus).

Electroencephalography (EEG) studies – when you put on a silly bobble hat with electrodes to measure the waves – show that brain waves remain calmer even after you’ve finished your session. This is why, if you meditate in the morning, you’re likely to feel less frenetic, calmer, and more focused, for the rest of your day. Even if you don’t have any of your crystals to hand!

Time To Take Your Brain To The Gym 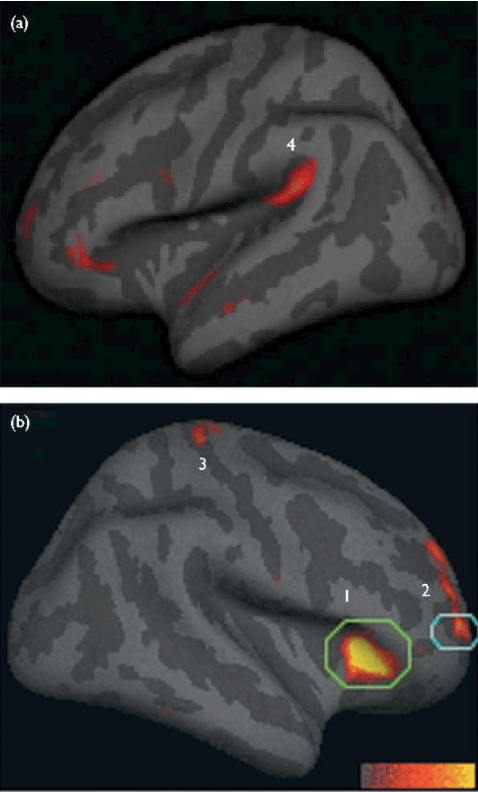 Cortical thickness in controls (top) and in meditators (bottom).

The long-term benefits of meditation are perhaps even more startling. Meditation changes the physical structure of your brain, making certain parts of it grow and other parts shrink. Many people find this hard to believe. But let’s use the analogy of going to the gym to see why this makes perfect sense. When you go to the gym regularly and work the same muscles, this leads to growth in your muscles (and appears to shrink the brains of gym junkies from what I can see). When you stop working the muscles regularly, they start to shrink again through lack of use.

This is exactly what happens in the brain during meditation. When you repeat the same mental task – such as maintaining concentration on the breath – this leads to growth in parts of the brain associated with this task. And no, I’m not talking about spiritual growth. The brain actually grows.

There is a body of research which shows that over time and with greater practice, meditation increases cortical thickness. This growth is most notable in the prefrontal cortex and right anterior insula. These are regions associated with attention, planning, moderating social behaviour, introspection, and sensory processing. Basically, the parts of our brain which make us human compared to other apes, ensuring that we refrain from doing things like running through supermarkets naked and throwing faeces at each other.

On top of this, meditation has also been shown to shrink and reduce the size of the amygdala. This small part of the brain detects stress in the environment, like an alarm. When a stressful stimulus is present, it sends a distress signal to the hypothalamus, which then triggers the release of nasty stress hormones like adrenaline. Meditation reduces the activity and the size of the amygdala, as the picture below shows. So, when faced with stressful situations in life, you’ll be less flooded with hormones related to anger, fear, and stress. Which surely is a good thing. 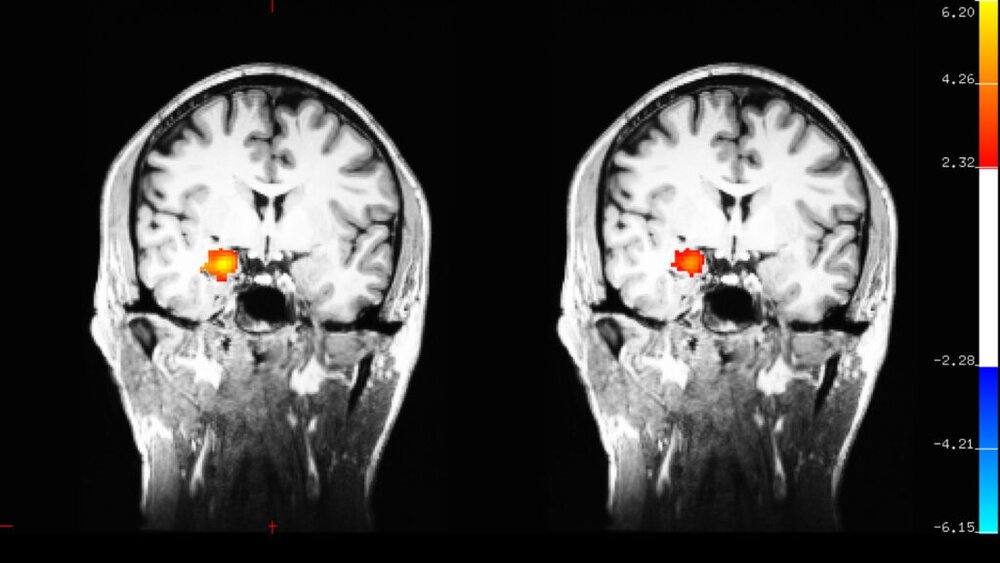 fMRI scans show the activation of the amygdala before (left) and after (right) the patient went on an eight-week meditation course, when they were shown distressing content.

The Tip Of The Iceberg

Hopefully, by now, you’re convinced. And if you aren’t, I imagine I’ve used enough scientific jargon to make you feel like I know something you don’t. Academics like to do this, making their writing style as inaccessible as humanly possible so that their research looks super complex and clever (all it does is make learning at university much less fun than it should be). The truth is, there’s enough research now showing the scientific benefits of meditation to fill books, rather than just a short (if incredibly informative) article. On a personal level, meditating for the past five years has made me more productive and focused, and less stressed and reactive in my daily life. In simple terms: happier.

One thing it hasn’t done, clearly, is reduced the in-built desire for us humans to prove that whatever we do is ‘right’ (meditating) and what everyone else does is ‘wrong’ (not meditating). Otherwise, I wouldn’t have felt the need to write this ‘told you so’ article, riddled with pettiness. Meditation clearly hasn’t made me less judgmental of others. This much is clear if you re-read the rather bitchy assessment of hippies – who are usually lovely people – at the start of the article. On balance, I still think that meditation has probably made me a marginally better human being, and a happier one certainly. It might work for you too.

Next Post: What’s In A Flag? A Journey To The Five Tallest Flags In The World