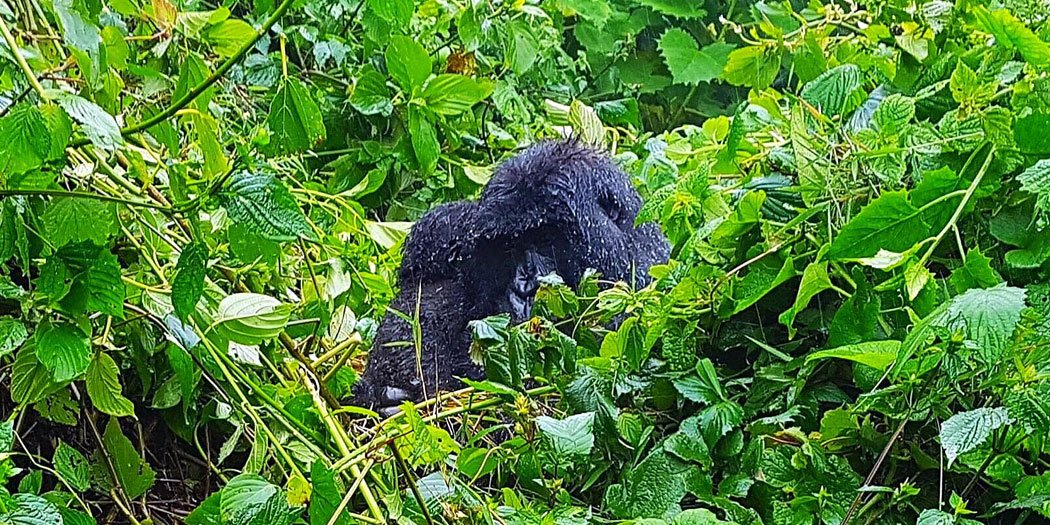 Country #101. Most of you probably think of only one thing when you hear the word ‘Rwanda’. Genocide. And it wouldn’t be surprising. In 1994, around 800,000 people were killed in the country’s darkest hour. Rwandan Hutus slaughtered huge swathes of the country’s Tutsis. If genocide isn’t stupid enough already, what makes the story even more tragic is that the ‘ethnic’ distinction between Hutus and Tutsis was largely invented by Belgian colonists when they ruled Rwanda from 1922 to 1966. They wanted to make conducting censuses easier. So, they divided the population into the two camps, based on whether they owned cattle (Tutsis), arbitrary physical measurements, and church records. 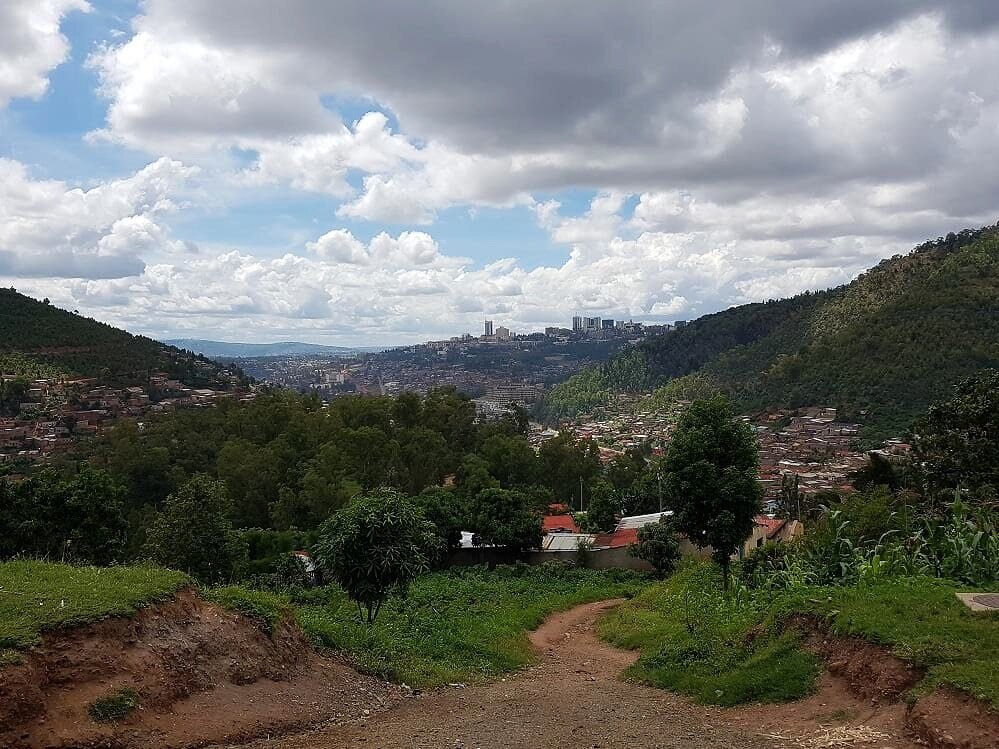 The skyline of Kigali, Rwanda.

Decades later, these hardening distinctions would lead to one of the worst genocides in history. The world stood by and did nothing. Leading UN peacekeeper Romeo Dallaire famously begged world leaders to send troops. He warned that the Hutus “were going to conduct an outright slaughter and elimination of the opposition”. His pleas were repeatedly ignored, even as the violence began. It would have taken several hundred troops to prevent the bloodshed. But in the aftermath of the first Gulf War, US President Bill Clinton was following new popular opinion against US interventions abroad. Anywhere. 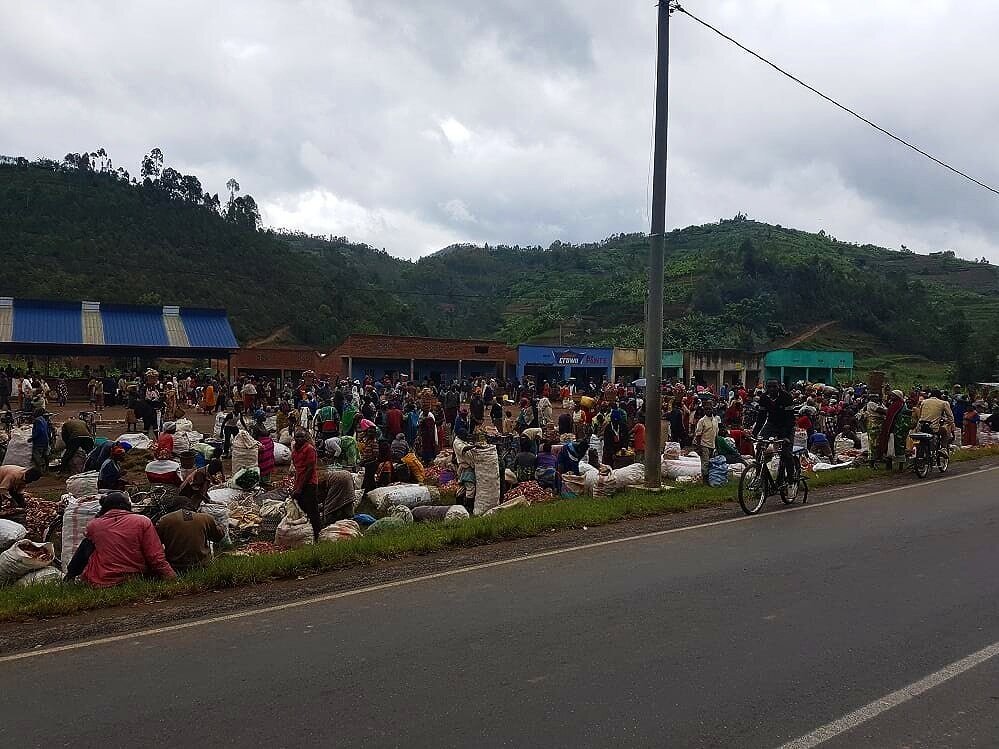 Whether or not an intervention happens has almost nothing to do with the scale of human suffering that could be averted by acting. And everything to do with electoral cycles and opinion polls in the US and a few of its allies. In the case of Rwanda, it was out of sight. It was easy for the world to look away. The result of this indifference was one of the most preventable and bloody genocides in history. 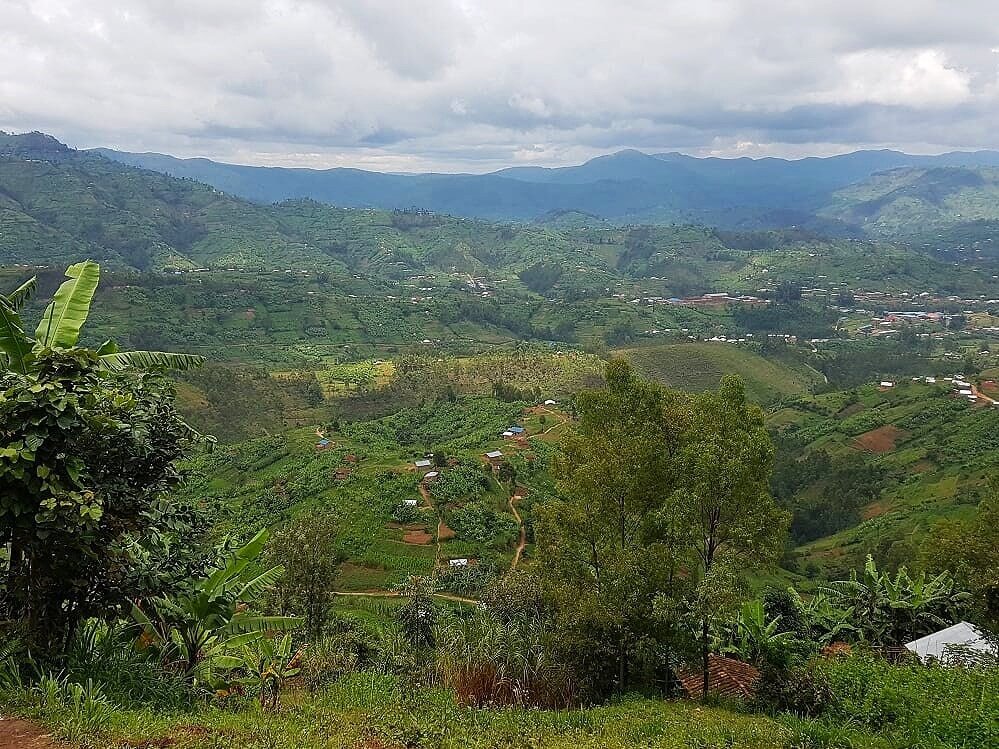 The green and pleasant landscapes of Rwanda.

All Is Not Lost

Wow. What a morose start to this article. Well, I promise that this is where the happy part of this post begins. I visited Rwanda in 2017. I had read a lot about the genocide before my visit. My MSc dissertation was on genocide and international intervention. So the information above – which I casually regaled as if it should be common knowledge to all of us – was hard earned in the libraries of Bristol. How would modern-day Rwanda stack up against what I’d read? 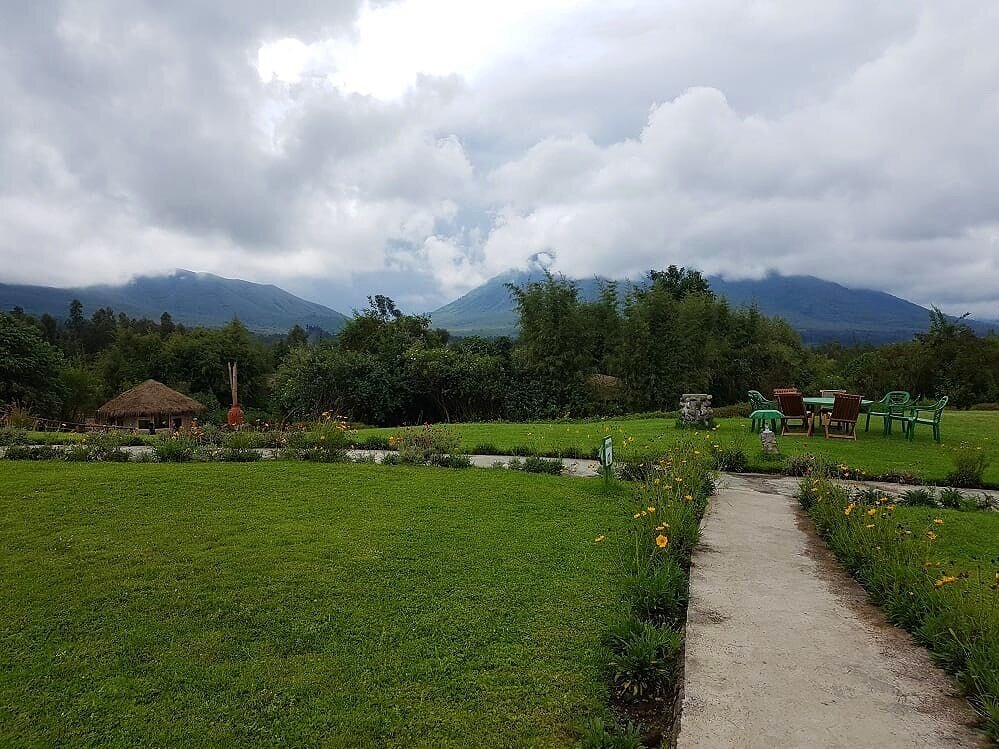 As my flight descended towards the capital Kigali, I was struck by how beautiful this little country was. Thousands of hills and mountains stretched endlessly onto the horizon. Muddy roads snaked around the country’s volcanic landscapes. Terraced farms clung impossibly to vertiginous hillsides. It looked strikingly lush and colourful. This little slice of the world looked perfect from the sky.

Upon landing, its loveliness continued to reveal itself. Driving around Kigali and its surrounds, I noticed it was one of the cleanest places I’d ever been to. Certainly the cleanest in Africa. It was spotless. As I learned, there’s good reason for this. It was Saturday. And as we sidled by, streets were busy with people cleaning and beautifying them. By law, everyone in Rwanda must help clean up on the third Saturday of each month. 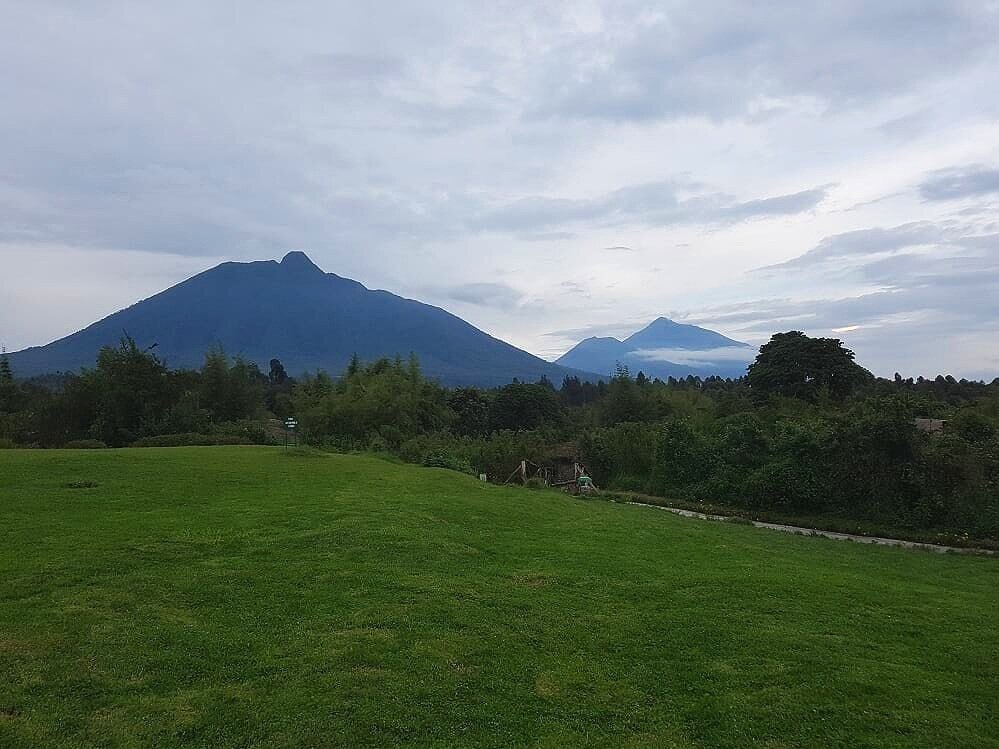 ‘Umuganda’, as it’s known, helps to keep Rwanda spotless. But it was also implemented to help communities heal and come together after the genocide. Tourists are exempt, by the way. A fact that made me feel no less guilty or awkward when our car kept getting stopped by police, only for them to wave and smile when they realised there was a spoiled Westerner sat on their arse in the back seat.

Cleanliness was only the start of it. Rwanda is impeccably run these days. The economy has been booming: one of the fastest growing in the world since 2000. Economists expect it to be the fastest growing economy on Earth over the next four years. Rwanda is one of the least corrupt countries in Africa, and it’s on course to become Africa’s leading ICT hub. Social services such as education, healthcare, housing, and livestock are provided to the needy. All of this with no distinction of ethnicity or region of origin – two forms of discrimination common in the lead-up to the genocide. Rwanda is now one of the most politically stable countries on the continent. 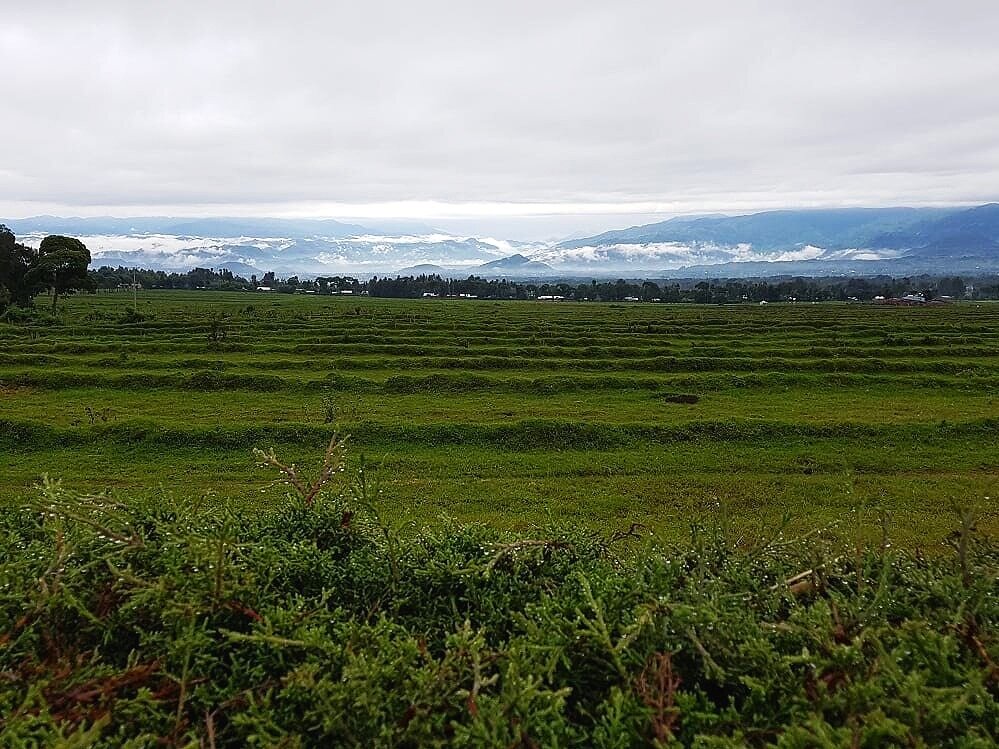 Low-lying clouds, in the damp and humid hills of Rwanda.

I’d just travelled through Namibia, Zimbabwe, Zambia, Botswana, Tanzania, and Uganda. By a country mile, Rwanda was the best functioning society of the lot. Part of this is due to the president, Paul Kagame. He’s not a popular chap in the West. He’s viewed as an authoritarian who limits press freedoms. Which he does (as do most leaders on the continent, by the way). So he’s no angel. However, when he became president in 2000, he inherited a nation torn apart by genocide. He has turned a nation of mostly uneducated guerrilla fighters into one of the most prosperous and unified on the continent. So, for me, he deserves some credit.

Travelling around the country, it was hard to fathom that such a happy and harmonious place had been home to such violence. Everywhere you looked, there were smiling people. Happily going about their business. I never felt unsafe. Agriculture has crept into every arable acre of this country. Somehow, 12 million people are squeezed into this country, which occupies an area not much bigger than Wales. 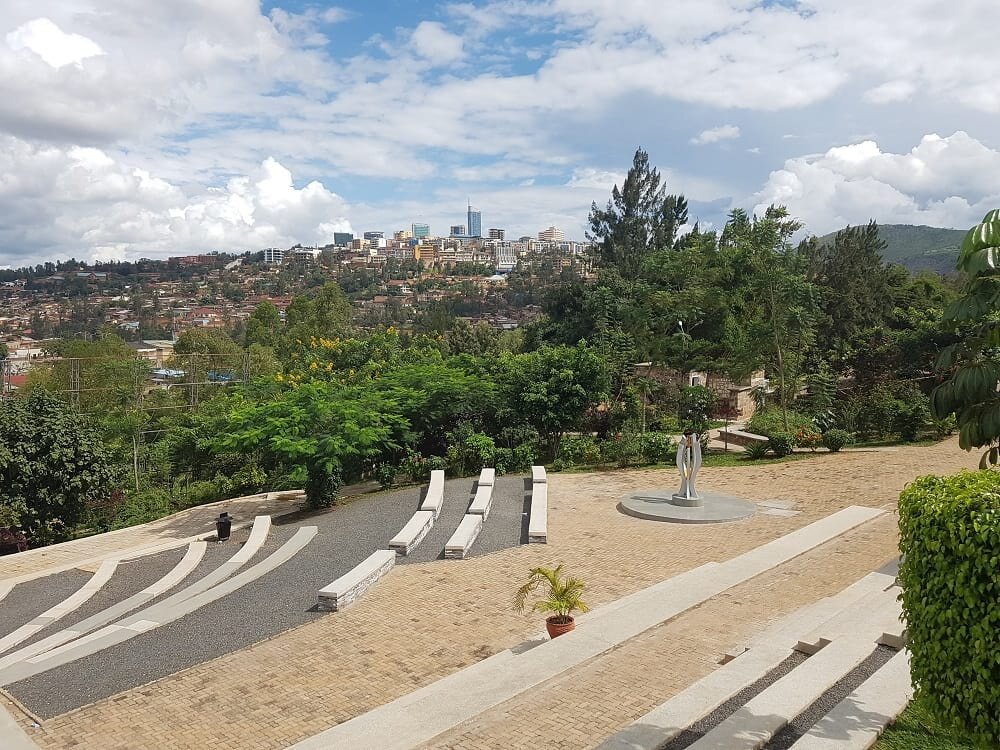 The scars of genocide, today, are not as obvious as you’d think. The Kigali Genocide Memorial, where over 250,000 people are buried, is chastening. Along with Auschwitz in Poland and Pol Pot’s killing fields in Cambodia, it was one of the most sombre places I’d visited. That aside, the scars of the killings are left to stories, and held within the minds of survivors. My driver and his ten siblings (quite normal in Rwanda) told me he had to hide in the forests for months as the genocide unfolded. Several of them did not make it. And yet, he bore no grudges. Just a staunch determination for Rwanda to continue healing. And this was the same for almost anyone I spoke to. Their capacity for forgiveness was awe-inspiring. 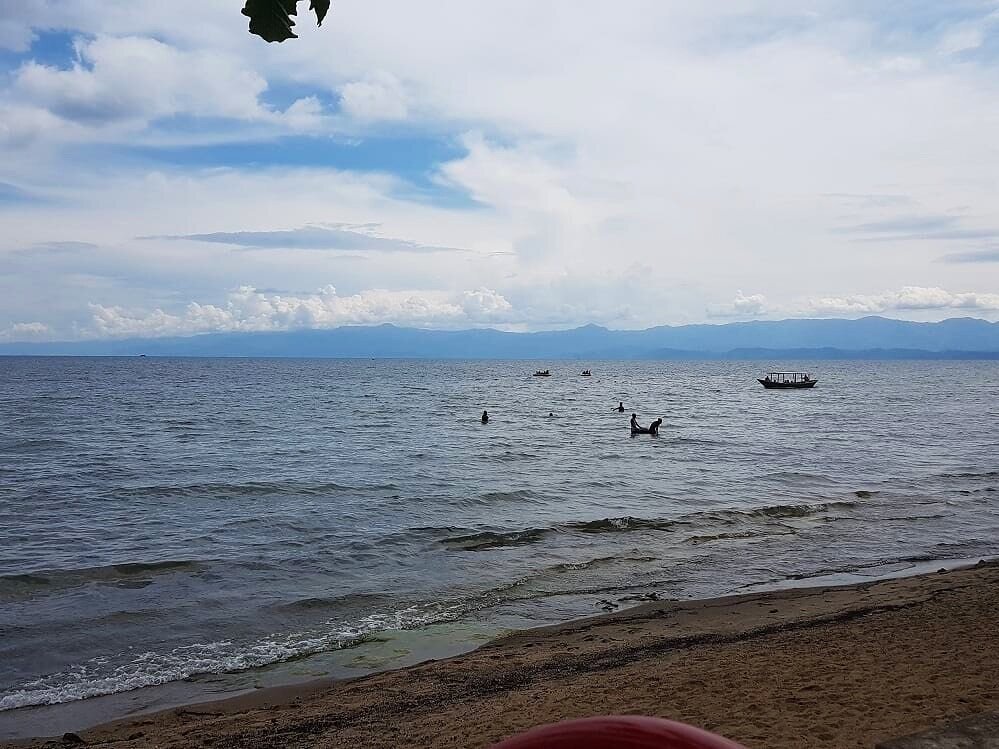 Lake Kivu, on the border of Burundi and DR Congo.

Most of the remaining Tutsis in the country have stories like this. But somehow, they’ve managed to put it behind them and move forward. Perhaps they have come to accept that there is clearly a good and bad side to human beings? A balance which is fragile and can be easily upset? It’s hard to say. I struggle to forgive people for supporting rival football teams, let alone for trying to exterminate my people and me. 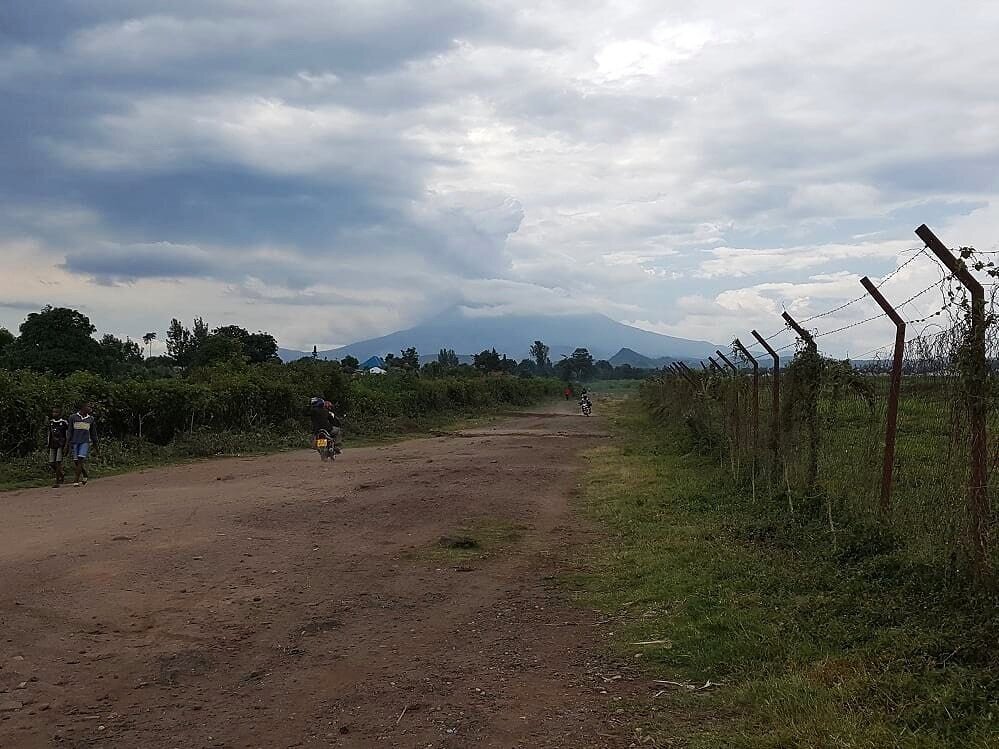 Mount Nyiragongo, in DR Congo. It has the most active and largest lava lake in the world. I assumed it couldn’t erupt (because I was visiting on holiday). But my guide told me it had erupted only a year earlier, killing over 200 people.

What is our nature? One of the world’s leading primatologists, Frans de Waal, has spent his life studying the behaviour of chimps and bonobos. We share roughly 99% of their DNA, and come from the same common ancestor. He argues that we can learn a lot from our nearest genetic cousins. He says we do have the selfish, mean, and violent tendencies of chimps. But he also argues we have the loving instincts of bonobos, which are largely peaceful creatures. We’re split down the middle.

This made perfect sense as I learned more about Rwanda’s dark past and promising future. And it was timely, as I headed towards the western part of Rwanda to see its majestic gorillas (which share a paltry 98% of their DNA with us). After two hours spent slipping and sliding around the muddy Volcanoes National Park, we arrived at the gorilla nest. When you first see them, time really does stand still. You know, then, that your life is completely at the mercy of these wild animals. It was perhaps the most enchanting experience of my lifetime. We were supposed to keep a ten-metre distance, and to remain still if the gorillas approached us. 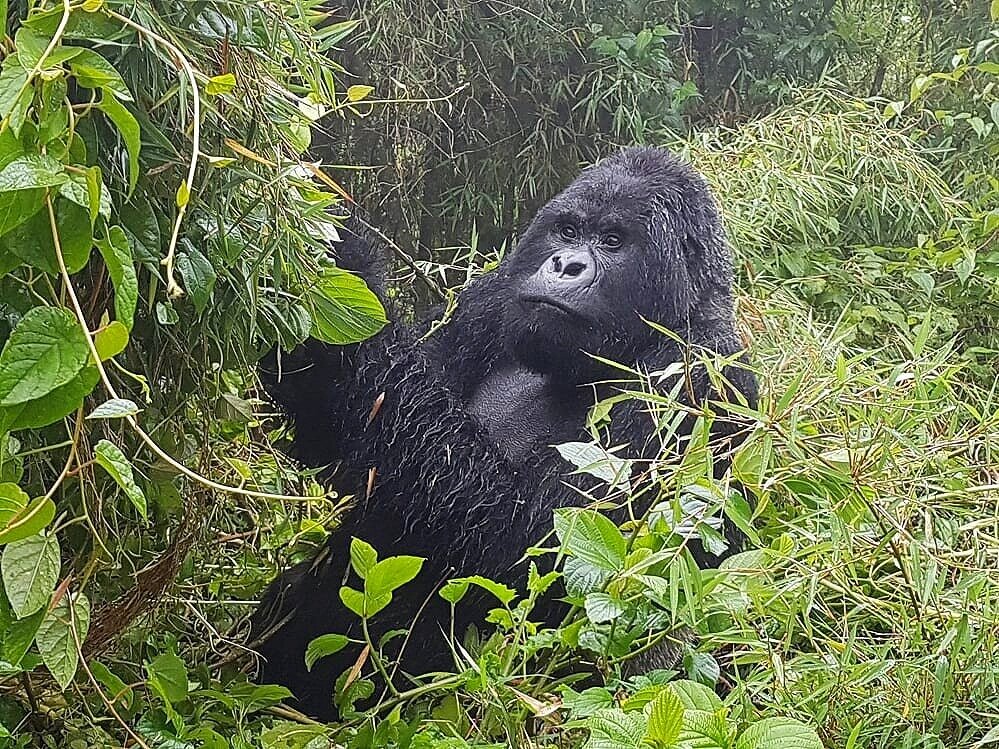 A silverback menacingly ambled towards us. Needless to say, I’m nowhere near as brave as I pretended to look in the photographs, or as I made out when regaling these stories to friends. The sheer power, muscularity, and dominance of the creature was palpable. Should he have wanted to, he could have ripped any of us apart with his bare hands (although the guide fortunately only told us this fact on the walk back to the ranger station). But he didn’t. He sized us up, and let us be. 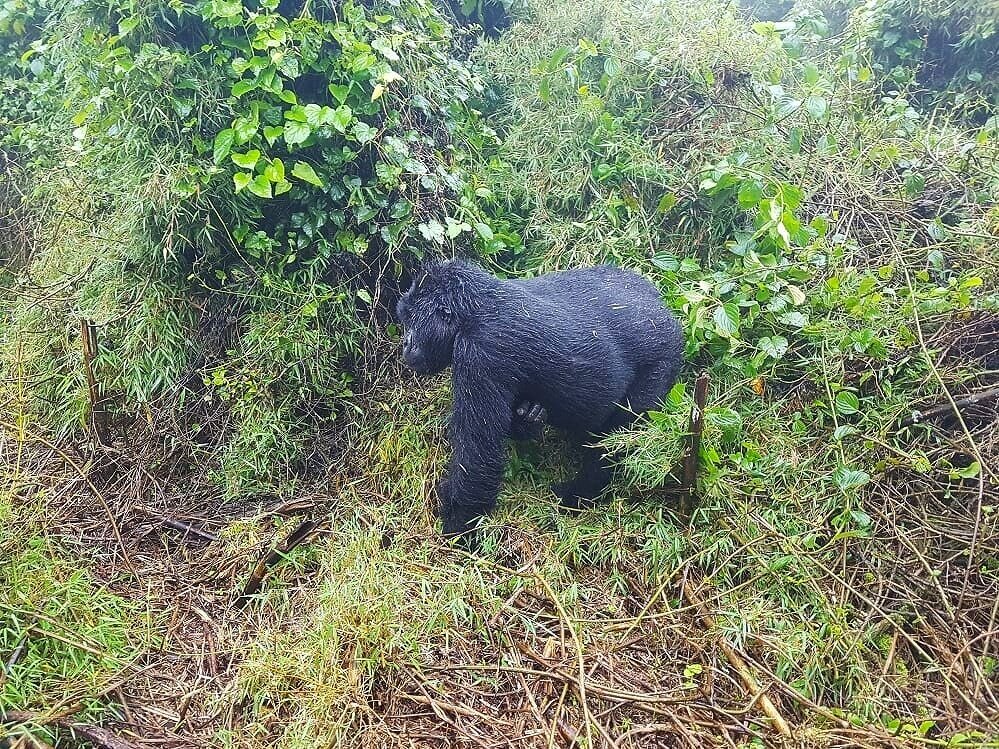 I realise this picture isn’t of the silverback. This is a female gorilla. The silverback story did happen, though. It was just that in that case, my desire to take a selfie was somewhat reduced by the overwhelming feeling that I might die.

After this, playful gorilla cubs came to curiously inspect the new human toys that had just arrived. The way they moved, the life behind the eyes, and their vitality, was so remarkably human as to take the breath away. One looked me straight in the eye and brushed my head with its hand. It was an enchanting encounter. That they share so much of our DNA made perfect sense to me, standing in the damp and verdant forests of Rwanda. 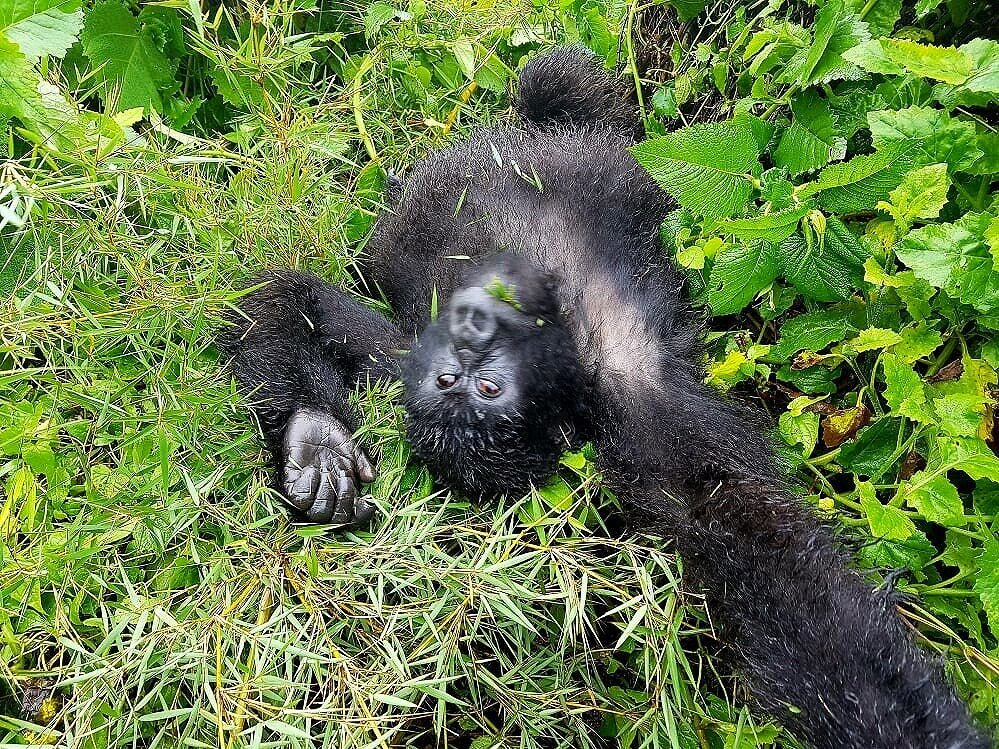 If this gorilla looks strikingly human, it’s because it mostly is.

The strength and power of the apes stood in direct opposition to their fragility. They’ve been as close to extinction as it’s possible to be over the past few decades. All of the wild gorillas in the world live in a 174 square mile region of volcanoes, on the border between Rwanda, Uganda, and DR Congo. In 2010, less than 500 existed. They appear to have taken a leaf out of Rwanda’s books. (The authorities, not the apes, whose thoughts don’t appear to extend beyond eating and farting.) 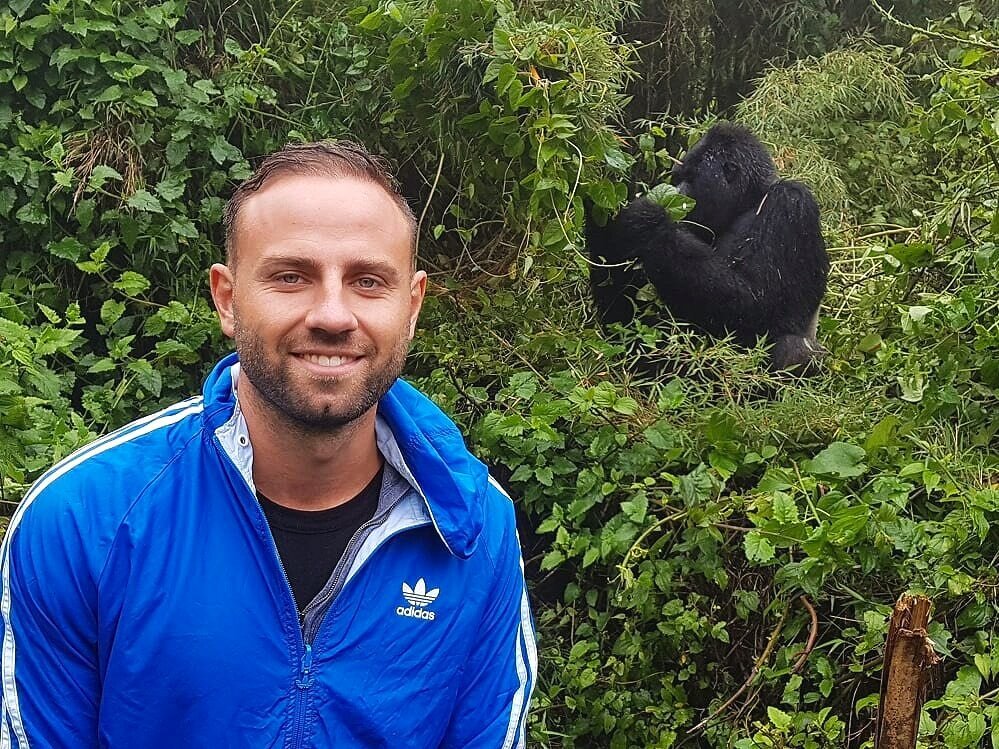 Gorillas were expected to be extinct by the millennium, but now over 1,000 exist and the number is growing. It reflects decades of collaboration and work between the three countries and their partners. Like Rwanda, these majestic creatures give rise to the hope that from the darkest depths, a brighter future is possible.