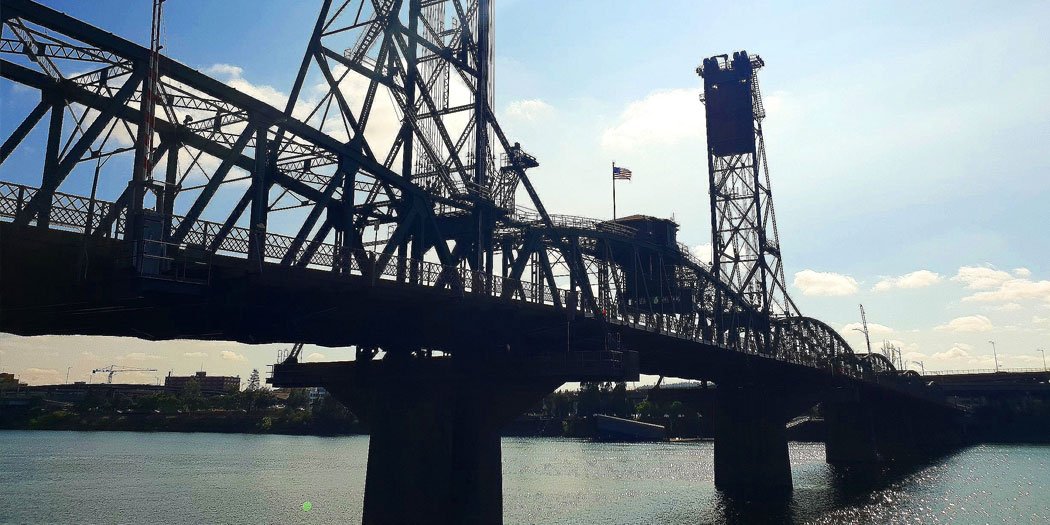 Portland, USA – America’s Greatest City? Almost Certainly, If You Are A Millennial

By some distance, Portland is the greatest city in the USA. I would love to say that this is an objective fact. Many would disagree. For starters, it has no world-famous landmarks. It rains. A lot. It’s hard to tell whether everyone is a hipster or is simply homeless. And to be sure, there are plenty of both. Indeed, the factors that make this city so special to me, will to some, be the very same reasons why it is the focus of their ire. 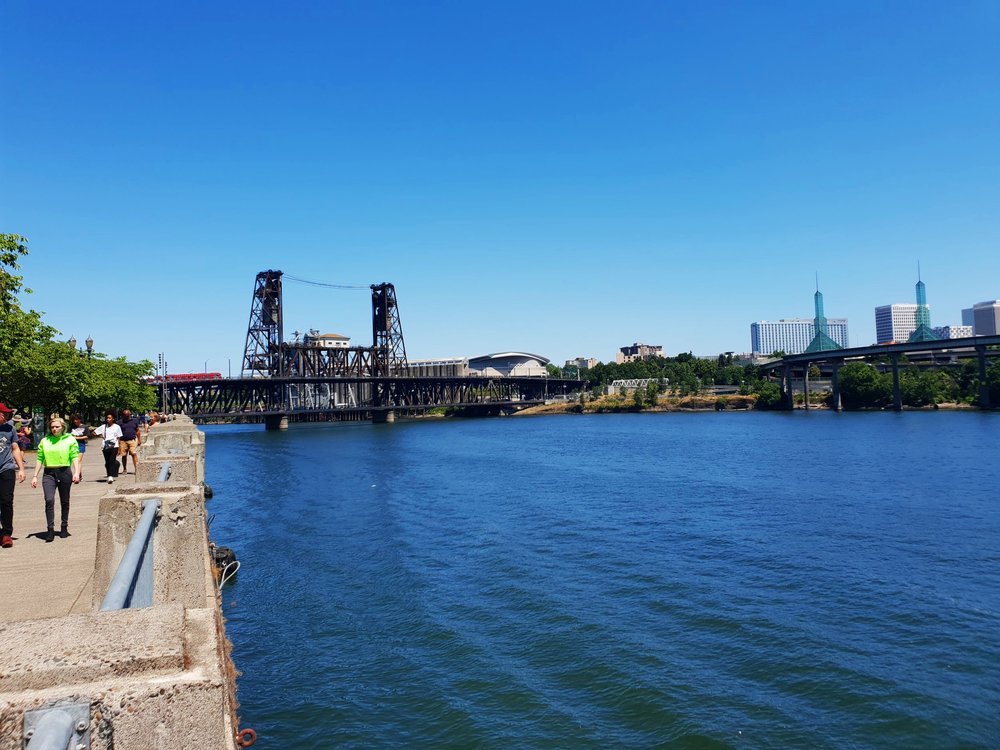 Portland is known as ‘Bridge City’, because it has lots of bridges. This bridge is called ‘Steel Bridge’, a sign that city planners had a ‘say what you see’ approach to naming things.

Portland is a millennial utopia. There are few places on earth with as many craft breweries, independent coffee shops, and kombucha brewers. Oregon has sensible laws regarding the decriminalisation of drugs. The general view here is that people who choose to smoke a bit of a plant are perhaps less dangerous to society than rapists or murderers. You won’t find many Trump supporters here. The city has more dogs than anywhere I have ever been. Soccer is also popular (or ‘football’ for the 95% of the world’s population that doesn’t live in America). The Portland Timbers are one of the better teams in the Major League Soccer (MLS) tournament. Even meditation, regularly dismissed as quasi-spiritual bullshit used by privileged millennials with nothing better to do (much like myself), is not frowned upon here. Had I landed in heaven?

The city’s unofficial slogan. As someone who worked as an economist in the City of London for half a decade, I’m not sure I am exactly the ‘weird’ type of person Portland hopes to attract.

A Home Away From Home

I’m aware that in visiting this liberal utopia, I’m doing the opposite of breaking down the large divides we are seeing in the West between left and right, urban and rural. The parts of London I like to hang out in, are in fact very similar to the ones I liked in Portland.

Should I feel guilty? Well, if it’s OK for Trump to hold a rally in South Carolina, where people are goaded into chanting “send her back” to an American congresswoman, surely I can do the same. But in a much less fascist way. Why can’t I hang around with good, bearded folk, and have conversations about why overt patriotism and organised religion might lead to division and are perhaps not good for humanity? I know which side of the fence I prefer. And if this is the echo chamber of the oft maligned ‘liberal metropolitan elite’, then lock me up and throw away the key (I was going to suggest “building a wall” around Portland, but felt this perhaps would have undermined some of the arguments I have just made). 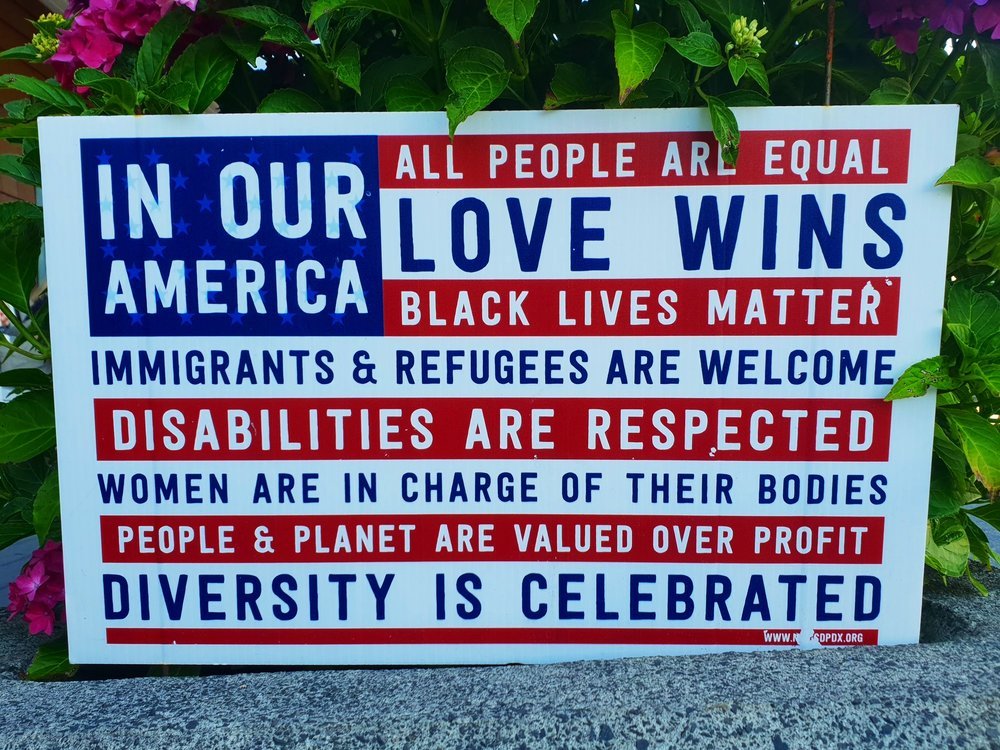 America is effectively two countries. Two extremely liberal slithers on the East and West Coast, and a not so liberal middle. It’s a bit like a sandwich, made with two delicious brioche buns, but filled with unidentified meat from Taco Bell (which incidentally is very popular in the centre of the country).

A Week In Portlandia

Portland is a compact city. I stayed a week, and felt I knew the city relatively well by the time I left. Locals call it a “big-small city”. Big enough to be exciting, small enough not to be overwhelming. A bit like Bristol in England or Austin, Texas, two other cities close to my heart. And where, predictably, people also wear the same sort of clothes and have the same kind of views as me. Any trip to Portland is not complete without sampling the local food trucks. The Saturday Market (which also runs on Sunday) and Portland Night Market are the best places to pay quite a lot of money for delicious food from all over the world. For me, this meant a vegan quinoa lunch bowl and a soy milk latte. 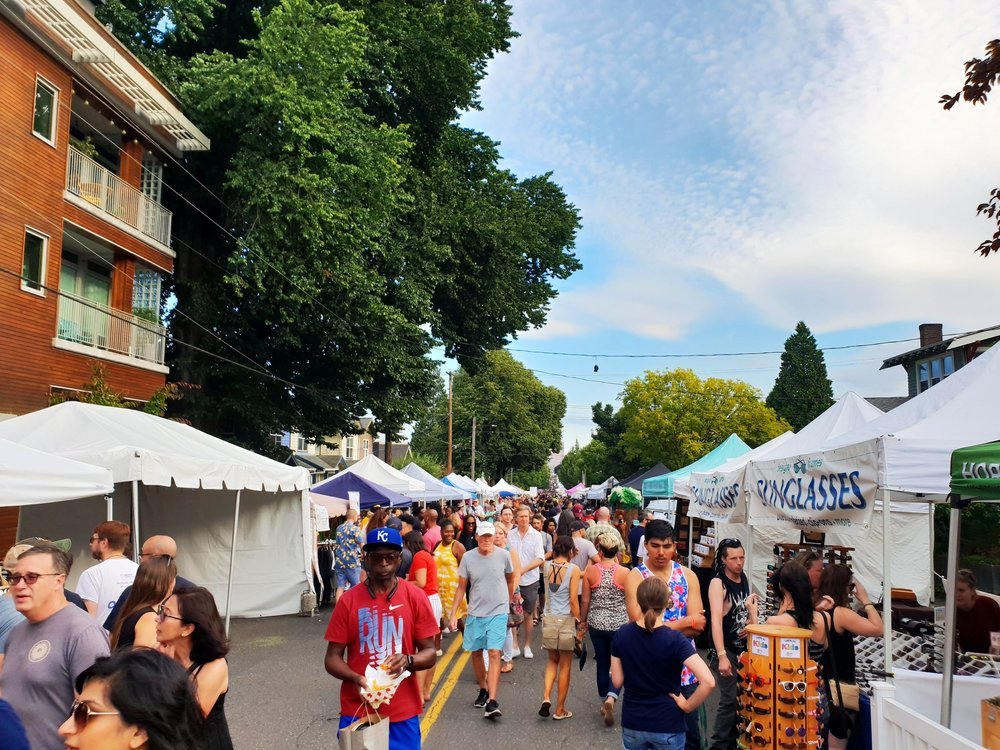 I didn’t actually order this. I chose something only marginally less pretentious. To take the edge off my fast growing smugness, I took a trip to the city’s famous Voodoo Doughnuts afterwards, where there’s always a queue. And then proceeded to drink exceedingly strong, and delicious, IPAs from the city’s plentiful microbreweries. Such is the devotion to beer here that bars don’t appear to be taken seriously unless they brew their own produce. Even the Portland Timbers soccer team have their own beer brewed in the stadium. Bars are clustered in different districts around town. You can spend hours drinking in the Pearl, on NW 23rd Ave, Mississippi and in Hawthorne, and all the while be fooled into thinking you were in Williamsburg, Brooklyn or Shoreditch in London. 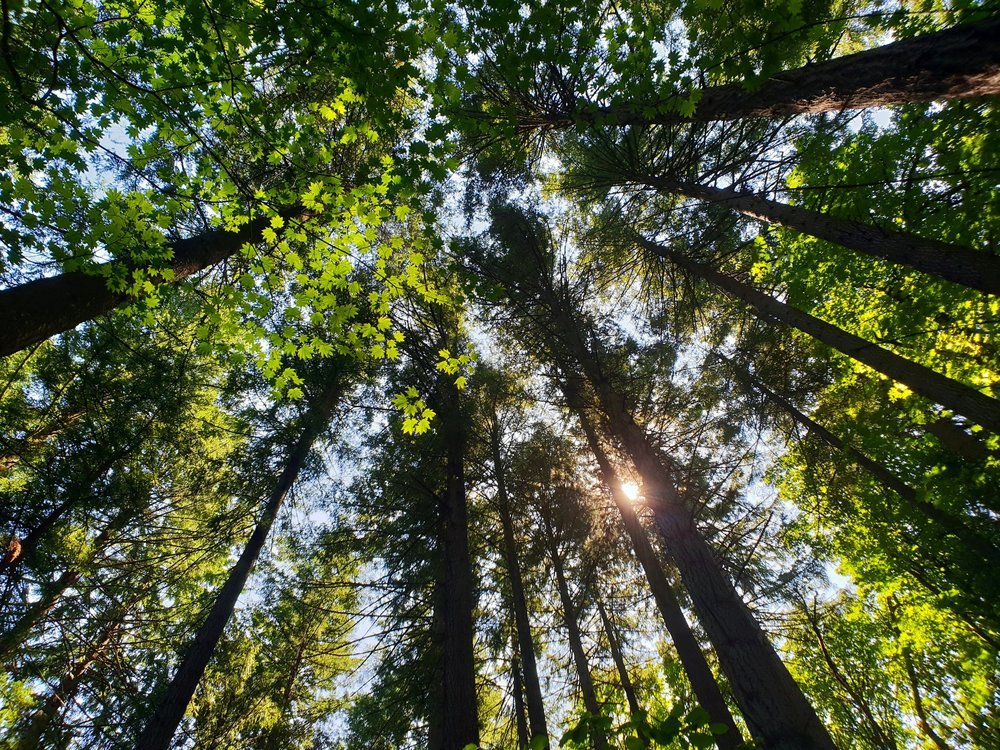 Beautiful nature in the heart of this great city.

Portland’s Most Famous Landmark Would Be Trees

Absent a particularly impressive port, ‘Forestland’ or ‘Treeland’ would have been a more apt name for this city. Especially given the extremely literal manner in which all things are named in this part of the world. In line with said naming conventions, Forest Park encroaches right into downtown Portland. Walking through the undulating forests, you’d be forgiven for thinking you were in the middle of the Oregon countryside. The Japanese Garden is a must. It describes itself as “one of the best” Japanese gardens in the US. While this does not sound that impressive on the face of it, given how much of a niche accolade this is, its location and serenity are hard to match anywhere in town. 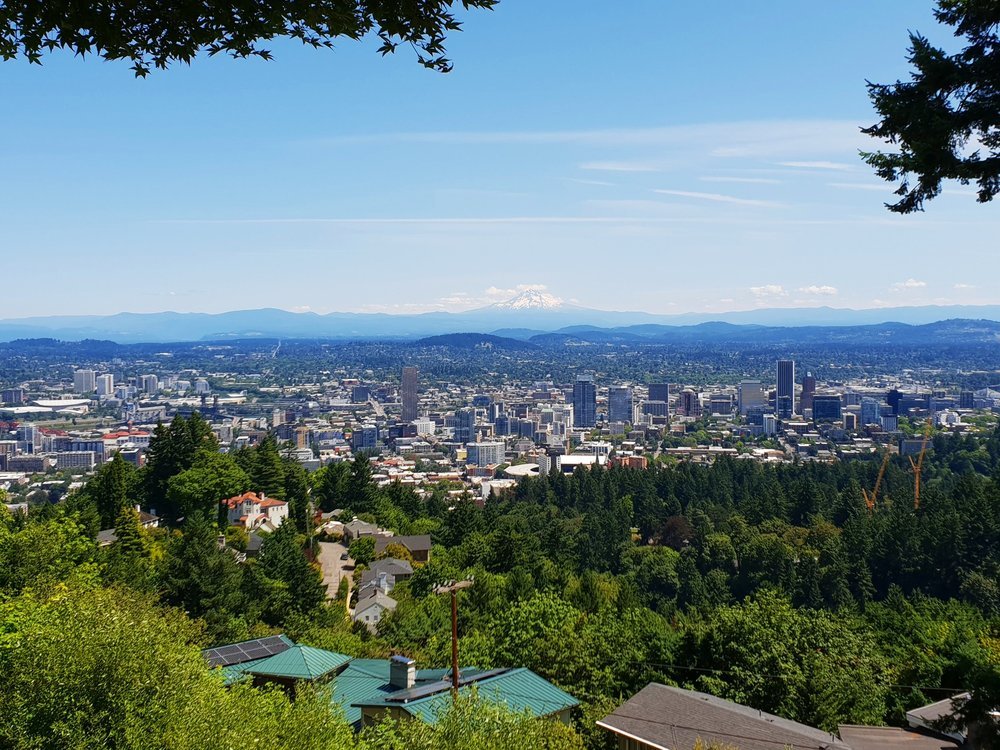 Portland (obviously). Mount Hood looms over the city, much like Mount Fuji in Japan. I’ve just mentioned this in an attempt to ram home the point that I like to travel, in a way that potentially disguises the fact that I am boasting. Just like anyone who posts anything on social media.

From Pittock Mansion, at the top of the park, you get sweeping views of the metropolis. Teetering over the top of the horizon is Mount Hood, a perfectly formed snow-capped volcano which looms over the city. Mount St Helens, whose crater famously exploded with dire consequences in 1980, also sits menacingly on the horizon. A chilling reminder that this is a country where natural disasters are common. I resolved to remind myself that at least I wasn’t in California, where the ‘Big One’ is due and will cause untold damage and loss of life when it does. 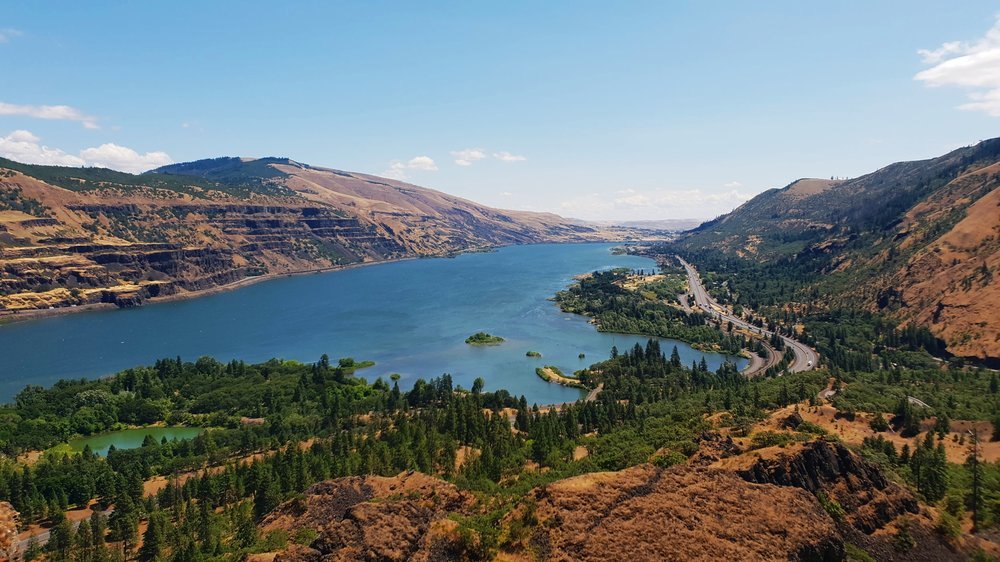 Towards Mount Hood, an hour from Portland. The vast expanse of Oregon, and the US, becomes quickly apparent. The state of Oregon has only four million people. Despite this, it is larger in area than the UK, which squeezes in 66 million people.

That was until a local cab driver informed me that Portland is also due its own ‘Big One’. Portland sits on one of the most active earthquake-prone tectonic plates in the country. I’m not sure how you can prepare for an earthquake. My preparations mostly involved sleeping poorly, standing with my feet widely apart at all times, and trying to think of ways to rapidly convert to Christianity and atone for my sins in the short seconds I would likely have to live after the quake started. 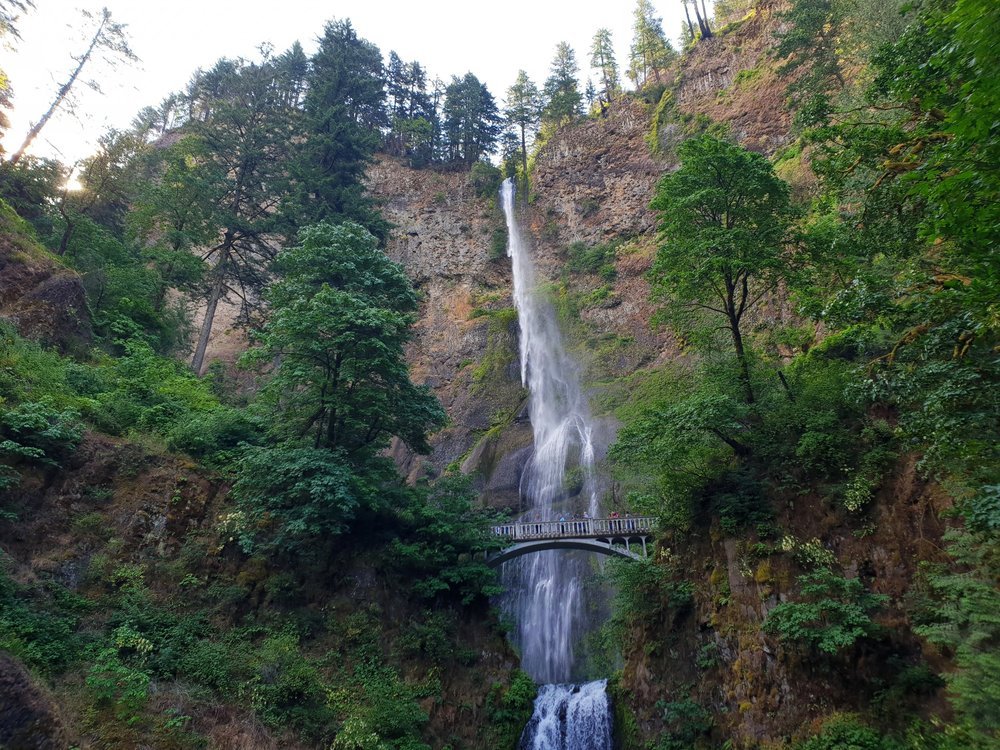 Nature On Your Doorstep Oregon

Oregon is every bit as beautiful as California, but feels like more of a hidden gem than its flashier and larger neighbour to the south. Within two hours of Portland, you witness some stunning scenery. To the east of the city, you have Multnomah Falls, the Bonneville Dam, and the stunning Mount Hood. To the west, the beautiful Oregon coastline. Summed up perfectly by the picture below, taken from Ecola State Park. I had mistakenly believed locals were calling it ‘E-coli’ State Park. For this reason, I was hesitant to visit. 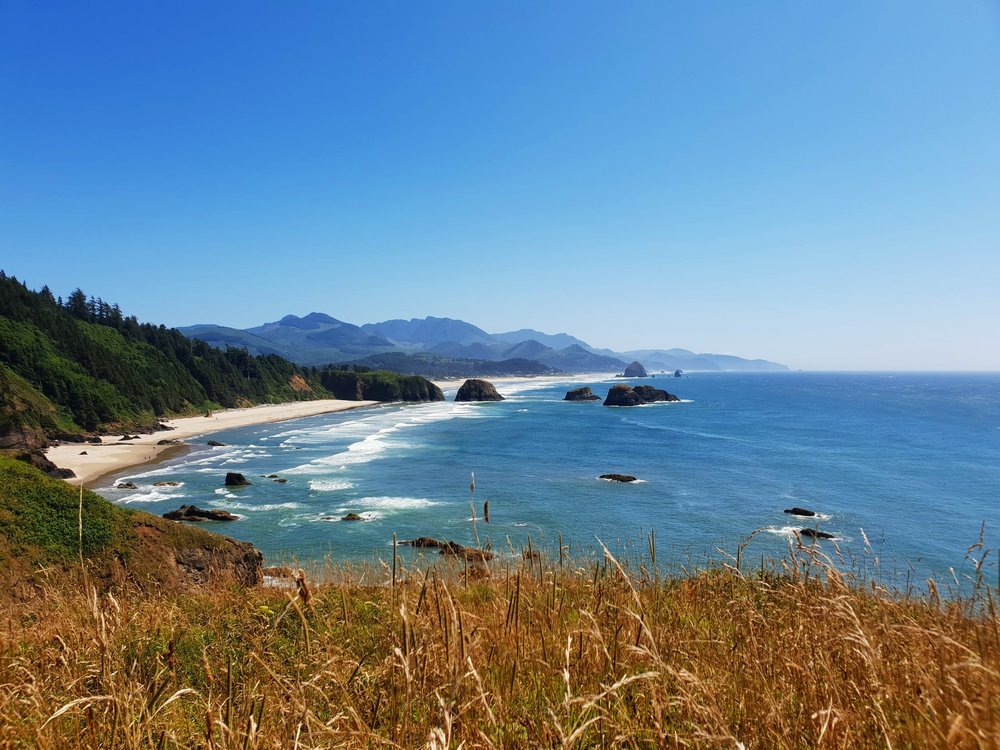 No caption necessary here, given the beauty on show.

Portland rapidly gives way to a taste of rural America. Rolling farmland, lush forests, and rickety old diners make Portland fast feel distant. An Oregon seaside town, called ‘Seaside’ (sigh), exemplified this. A man walked past with a t-shirt that said “God, Guns, and Trump”. Before judging the man, I remembered, be compassionate. He probably got all his information from biased newspapers, TV channels riddled with inaccurate facts, and by only hanging around with people with the same views as him. “Could I be the same?”, I thought to myself while reading a Vice article on my phone in a bar full of people from a similar demographic. Definitely not.

Previous Post: USA – A Sweaty Sojourn Through The Deep South