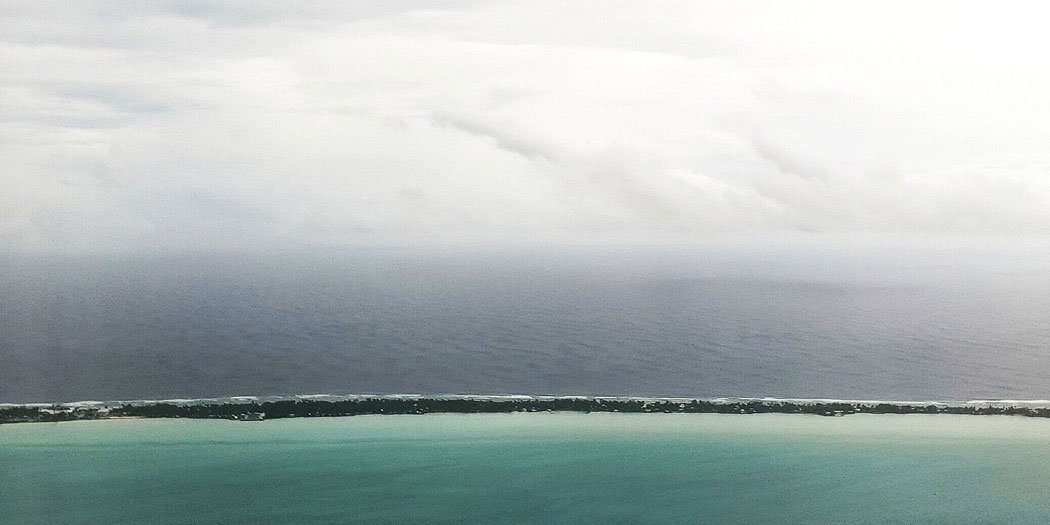 Nauru – Country #146. For a tiny island, with just over 10,000 inhabitants, Nauru has had quite a history. It’s not a particularly happy one. The island is a cautionary tale of financial mismanagement and environmental degradation. In 1982, incredibly, Nauru was the richest country in the entire world on a GDP per capita basis. It built up huge royalties from mining phosphate, which it has since squandered quite spectacularly. 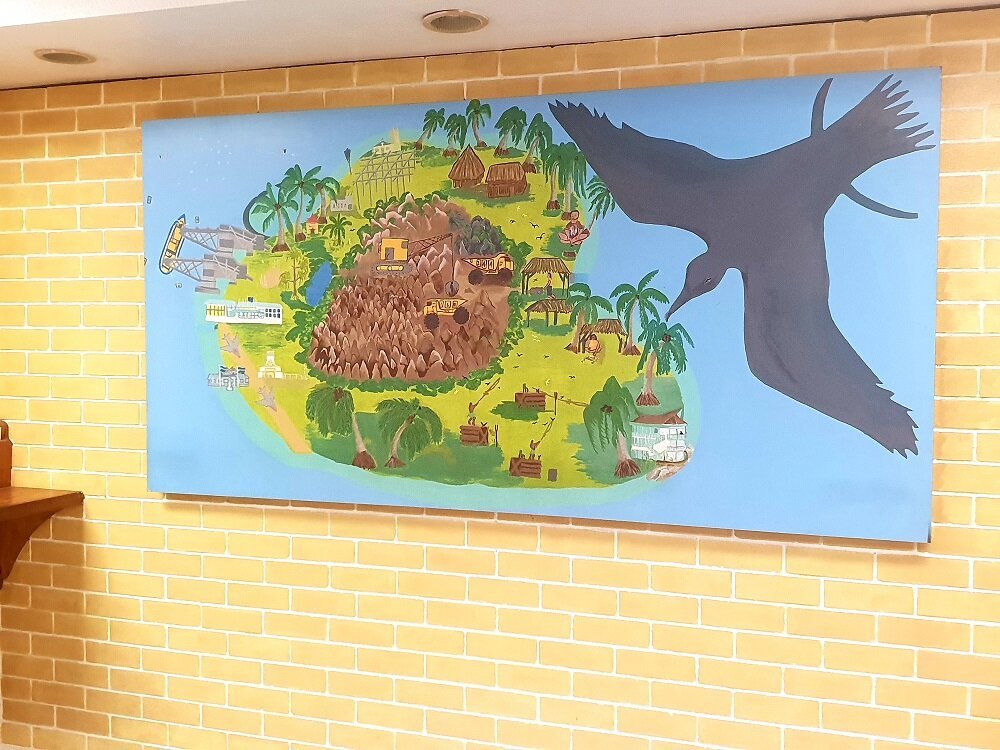 A map of Nauru. Sadly, this colourful painting makes the phosphate mine seem much smaller than it actually is.

Fast forward to today. The picture is not positive. The mines and state coffers are empty. Perhaps the government didn’t realise how small the island is. It’s just 20km squared. As the cheery picture above depicts, 80% of the island is now an uninhabitable, disused mine. The money made from phosphate was invested poorly and lost to corruption. Peak financial mismanagement came when Nauru funded a West End musical in London, based on the life of Leonardo da Vinci. It closed within a month, losing the country US$7 million in today’s money. This works out to roughly US$700 for each Nauruan citizen. 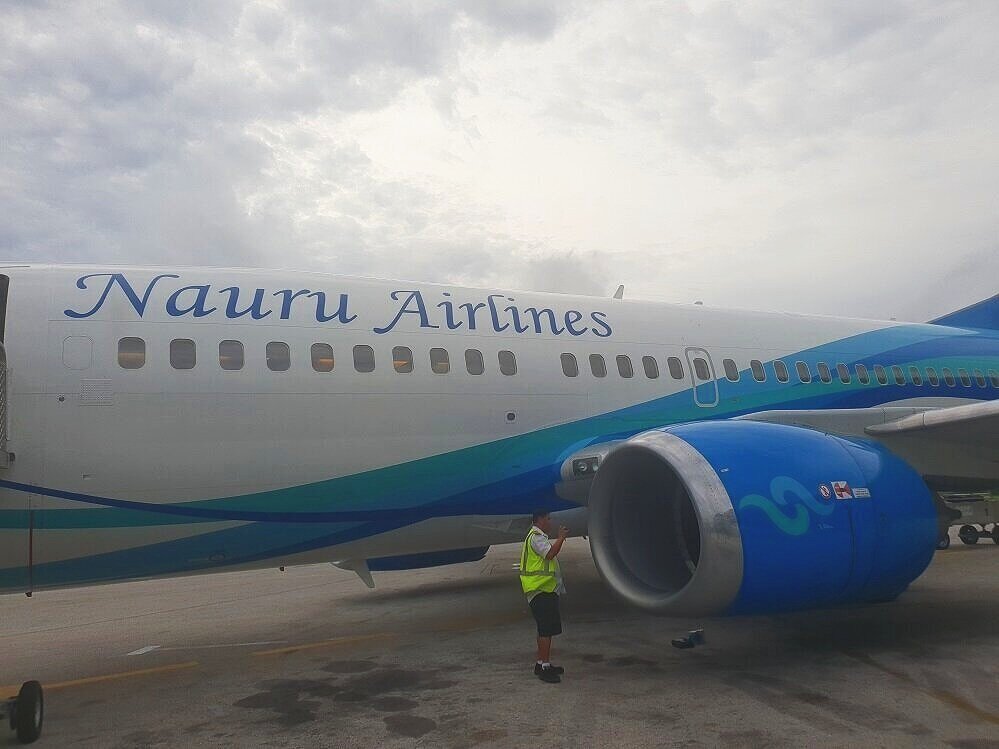 A Nauru Airlines plane. The engineer you can see travels on board with you.

Unsurprisingly, most of Nauru’s money was gone by the mid 90s. It turned to Australia for financial support, with Nauru agreeing to house the Australian Immigration Detention Centre as the price for financial assistance. This ‘centre’ houses refugees who had the audacity to attempt to land on one of the largest and least densely populated nations on Earth. Fear of detention here is used as the stick to prevent potential refugees and migrants from making the journey. 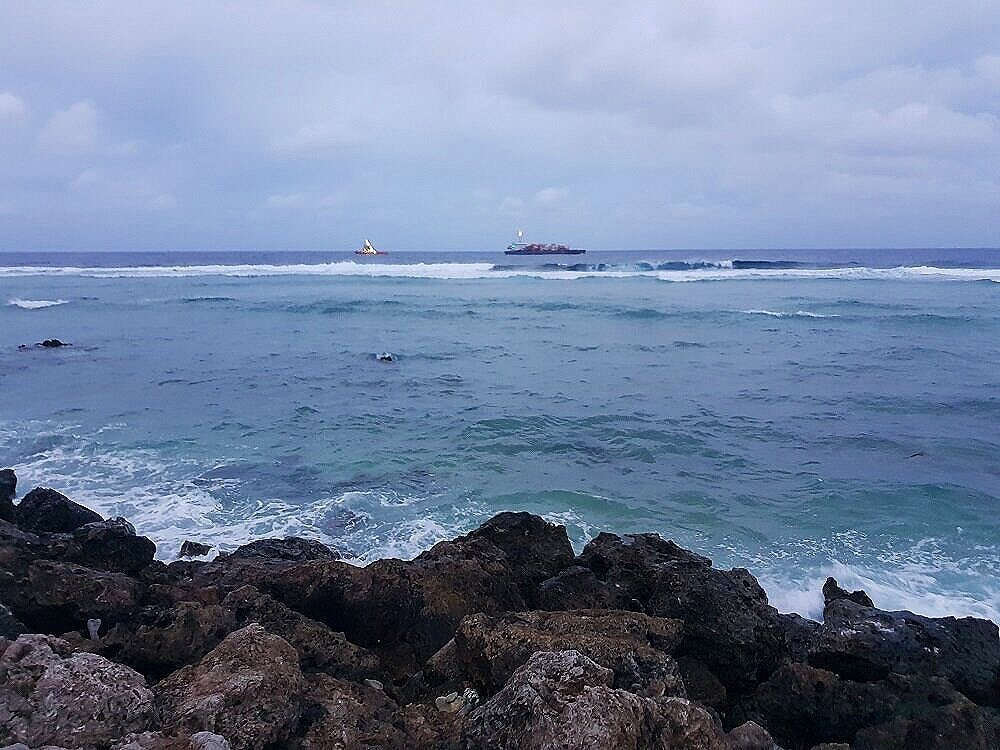 Tourism Yet To… Exist?

So, have you booked your flight yet? Probably not. A sinking island made up mostly of a giant open mine is a hard sell on TripAdvisor. Nauru is the least visited country in the world, getting less than 1,000 visitors a year. The country is so small that it probably has the most informal visa system in the world. I just had to give ‘Rajeev’ a call to tell him I planned on coming to Nauru, and he said it was “fine”. Rajeev is the Director of Nauru Immigration. It’s the first time I’ve phoned up a government minister to discuss coming to visit on holiday. 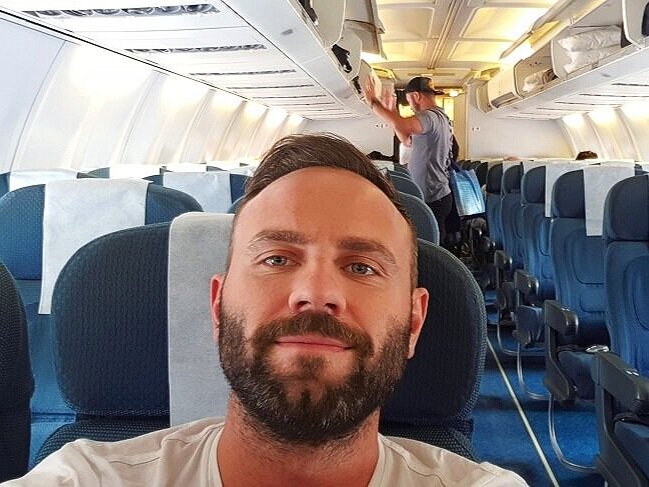 The Nauru Airlines flight was full of cargo, but less of humans.

There were just ten passengers on my Nauru Airlines flight from Brisbane. They all seemed to know each other. One of them, an engineer and mechanic, had to be on board as there’s no-one in Nauru capable of fixing the plane if it breaks down. I didn’t check the safety record of Nauru Airlines before my visit, for good reason.

The other passengers, like me, were mainly people trying to visit as many of the world’s countries as possible. Two I spoke to had visited more countries than me which, in the ‘every country in the world’ community, is the equivalent of a social checkmate. Despite the lack of actual humans on board, an attendant strangely told me the flight was “full”. It’s one of only seven regular flights that touch down in Nauru per week and is mainly used to import heavy cargo into the country, rather than passengers. 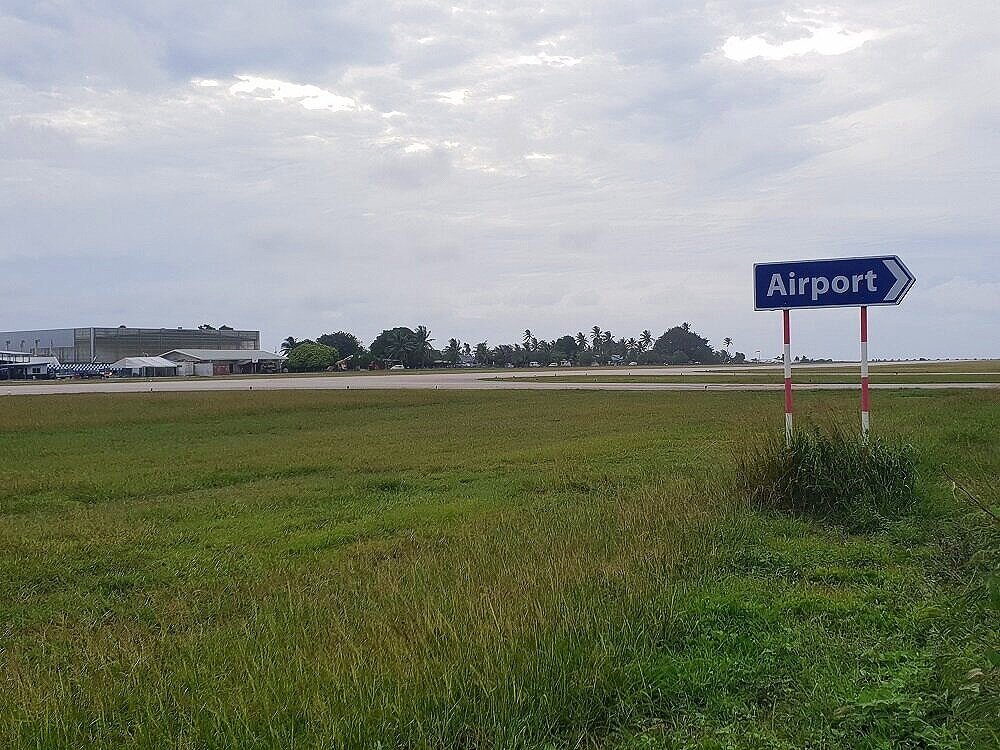 Nauru airport runway. It’s used as a recreation area for the vast majority of the time, apart from when the one daily flight arrives and departs.

You can drive around Nauru in around 30 minutes. Pockets of beauty remain. Pristine beaches are backed with curved palm trees, while jagged limestone rock formations poke out above the water. But sights like this are all too rare. In terms of tourist attractions, the airport runway is probably the main thing to see. Genuinely. It’s the largest open area of the island not covered in a mine, so most days the kids use it to play sports like rugby.

My hotel, ‘The Menen’ Hotel, is the only one on the island and is not listed on the Internet. Why? It’s not cheap. My room was a glorified shipping container and had décor that appeared to be inspired by the nearby Australian Immigration Detention Centre. All the Nauruan people who I met during my trip where friendly and warm, making the current situation in the country particularly disheartening. I fear there’s little to suggest that Nauru’s future looks any brighter than its recent history. 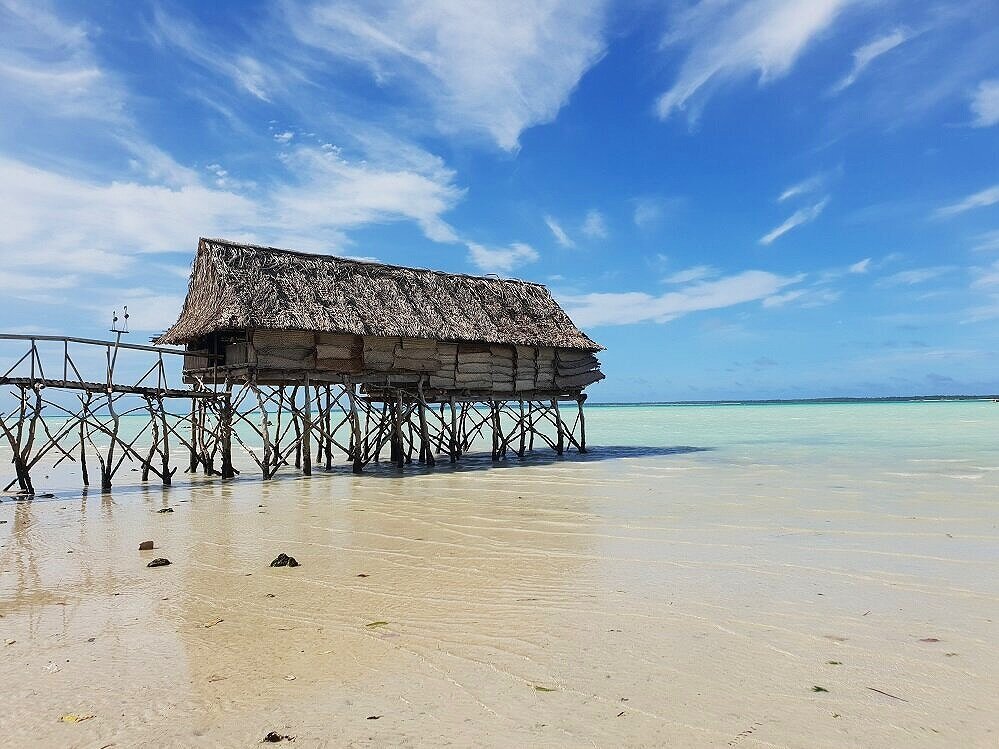 Tarawa, Kiribati. Much more what you expect when you think of a remote country in the Pacific Islands.

Kiribati – Country #147. Perhaps unfairly, Kiribati comes in a mere two places behind Nauru as the world’s third least-visited nation. And only one place behind Somalia, which is in second place. Kiribati was much closer to the image you see when you think of the Pacific Islands. 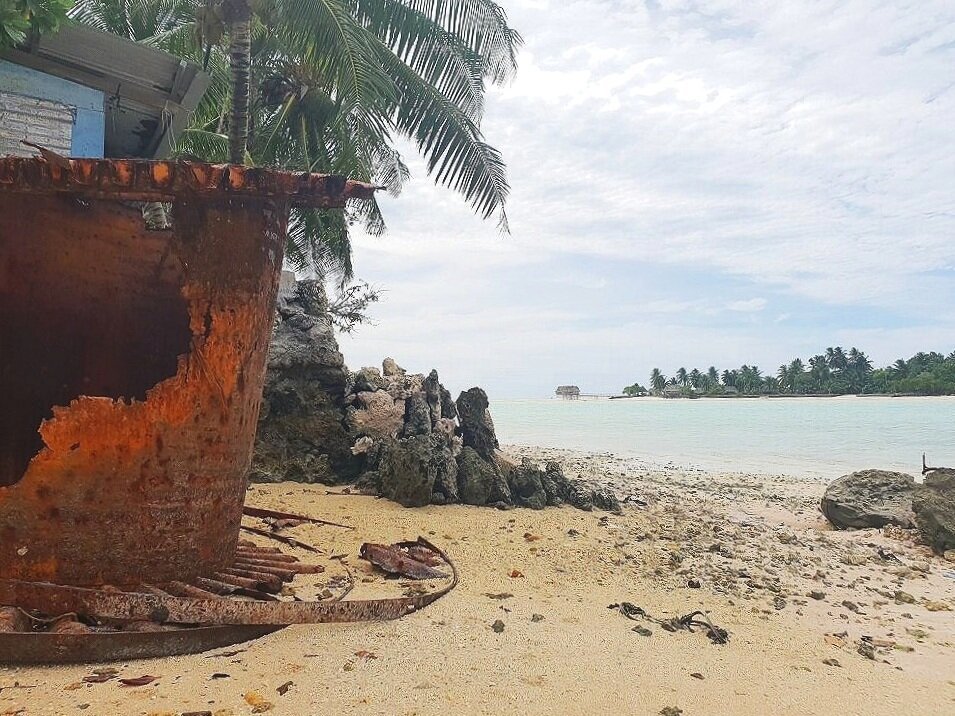 Kiribati. The northern outer islands of Tarawa are only accessible by boat and there are no roads on them.

White sandy beaches, turquoise water, and palm trees dot the beautiful coastline. It certainly beats a mine. I visited the Tarawa atoll, which from a geographic standpoint was fascinating. An atoll is a ring-shaped island that encircles a lagoon, which is usually the rim of an extinct volcano poking out above the sea. I didn’t know what an atoll was either until I googled it; you are excused. 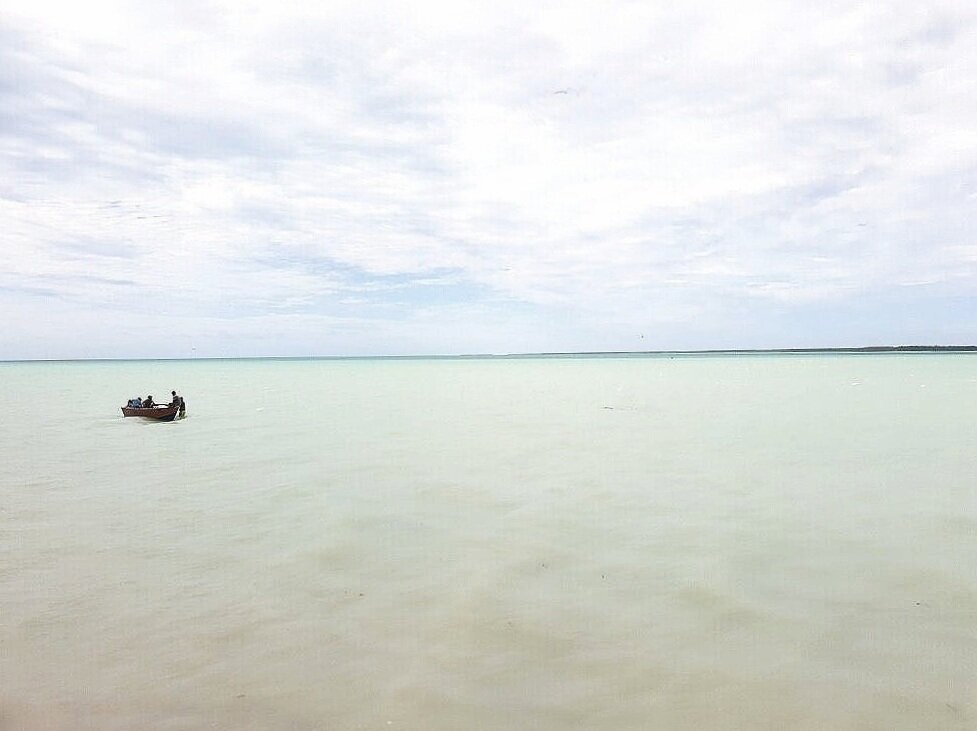 Tarawa Lagoon in Kiribati. You can just about see the other side of the extinct volcano rim, in the distance.

This means Kiribati is just about wide enough to fit a road and perhaps a house in most areas. In some places, it cannot fit even this. This results in incredible seashore and lagoon vistas wherever you go. With 50,000 inhabitants in the Tarawa atoll, the small amount of available land makes the island very densely populated. At its highest point, the island is 3 metres. Which, as I write this sat in Kiribati, I’m pretty sure is higher than most tsunamis. What a relief.

Kiribati offers you a real sense of slow, colourful, island life. It doesn’t take long to adjust to the gentle pace of life here. There’s no need to be in a rush. I noticed many similarities with my visits to Samoa, Fiji, and Tonga. 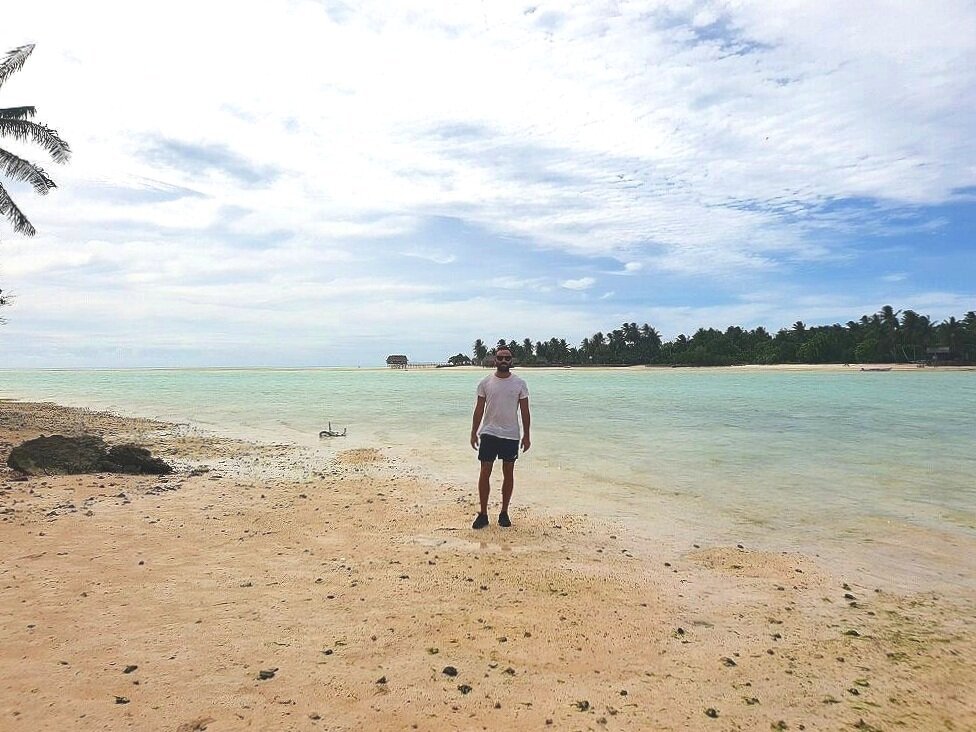 Man stands on beach in Kiribati. I look weirdly photoshopped into this photo, perhaps because I took the equally strange decision to wear trainers on the beach.

This included the influence of the less mainstream versions of the Christian Church. The Mormon Church and to a lesser extent the Seventh Day Adventists – two of the silliest branches – are big here. Wealthy US donors have worked out that these socioeconomically underdeveloped countries are ripe for help (and bribery). The best schools here have been built by these churches. They are some of the most robust structures on the entire island, and have excellent facilities, including basketball courts. Altruism at its best, given that anyone is allowed to send their child there… so long as you promise to believe in that branch of the church’s chosen theological story. 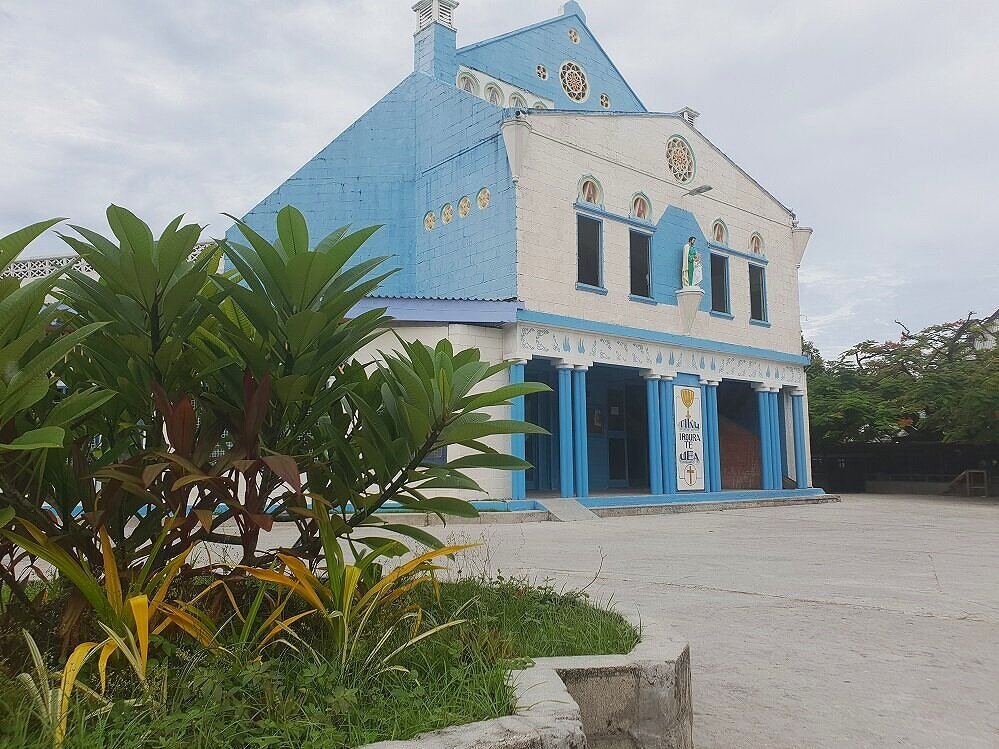 Catholic church in Kiribati. The tiny island is a battleground for various iterations of the Christian Church.

Something that struck me during my visit was how truly remote Kiribati is. Almost everyone who lives here has never left this tiny slither of densely populated land. Even then, the nearest major country is Australia, which is a six-hour flight away. Stuck in the middle of the Pacific Ocean, there are perhaps few places in the world that would have been changed most tangibly by the dawn of the Internet than Kiribati. Almost everyone here seems to have a smartphone, linking them to news and cultures from around the world. Just a decade or so, the edges of this small slither of land would have, in effect, been the boundaries of the world for the citizens of Kiribati. How things change. 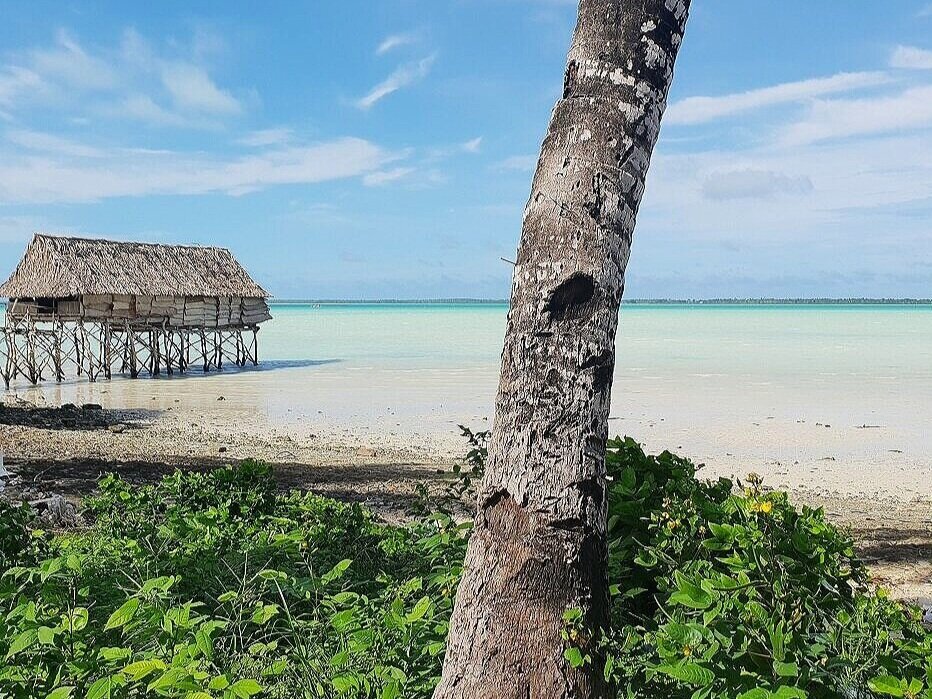 Kiribati’s remoteness means it will likely remain one of the least visited countries in the world for years to come. Shame really, given how beautiful parts of it are.