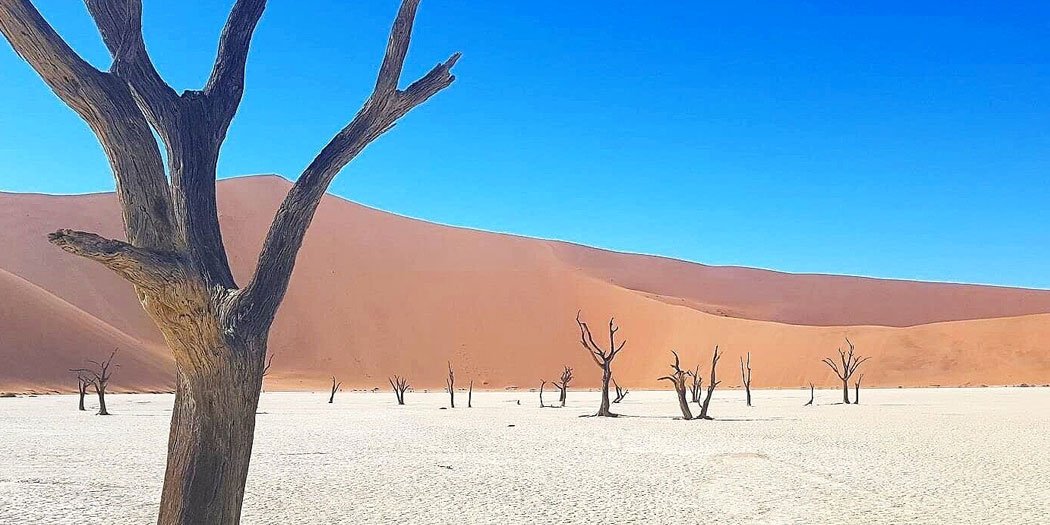 Country #95. I visited Namibia three years ago. You know, in the days where travel was a thing? Although Ethiopia is my favourite country in Africa overall, Namibia only just missed out on the top spot. The country is simply breathtaking. It offers raw, barren, and natural beauty which remains unsurpassed anywhere else on the continent. From the mountain-sized dunes of otherworldly Sossusvlei, to the jaw-dropping Fish River Canyon, and on to the surreal landscapes of the skeleton coast, Namibia is a haven for those in love with natural scenery on a truly epic scale. Oh, and it’s one of only 12 countries where you can see the ‘Big Five’ game animals to boot. 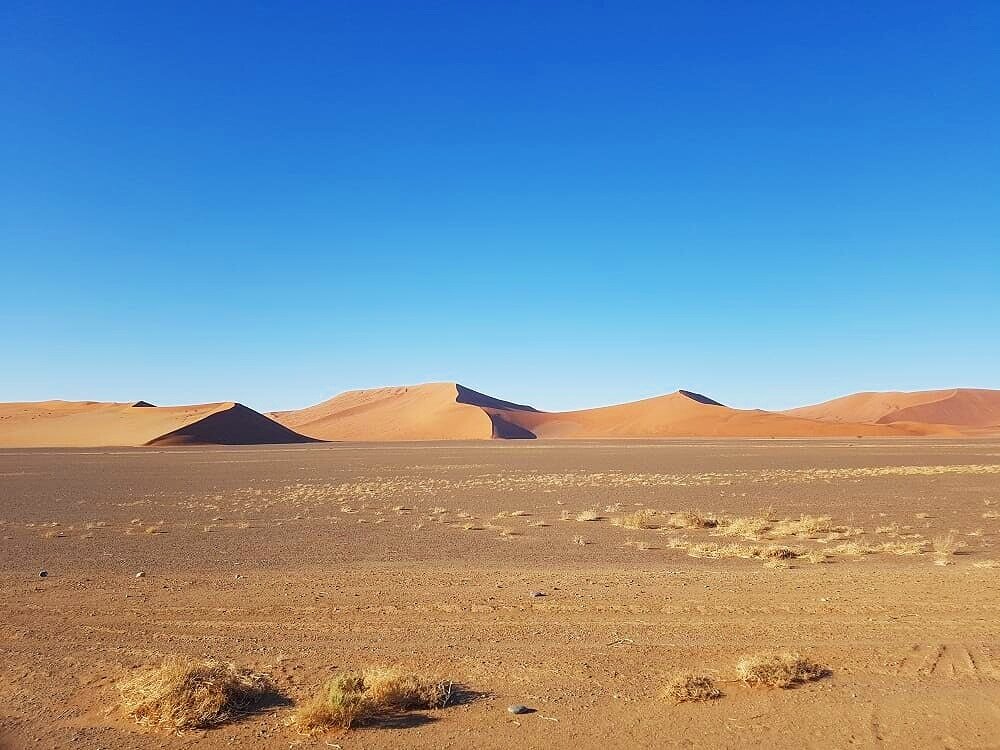 The rippling sand dunes of Sossusvlei.

Namibia is often touted as being one of the easiest places to travel in Africa, hence the ‘for beginners’ moniker often given to it in travel guides. This description implicitly paints a slightly archaic picture of Africa: that it’s inhospitable, dangerous, and only possible to visit if you arduously trek there from Europe (I concede this last point is perhaps temporarily true amidst Covid-19). I’ll let you in on a secret. Normally, you can fly to most destinations in the African continent. It’s also possible to visit other countries in Africa, without having visited any ‘beginner’ countries beforehand. Indeed, it’s perfectly possible to jump straight into an ‘intermediate’ or ‘advanced’ African country, if you’re one of those people who adhere to travel guides on the ‘How Scary is this African Country?’ travel scale. 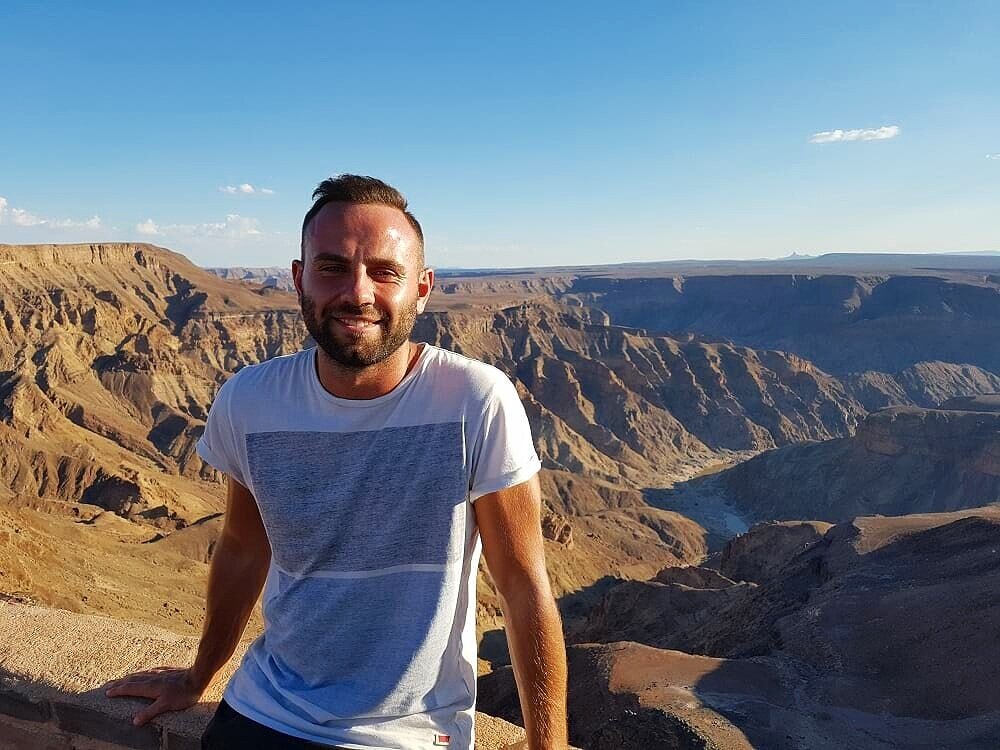 Fish River Canyon is the second largest canyon in the world. If you think I look young in this photo, rest assured that ageing is a process that afflicts even the wisest of humans.

For example, when I visited Sierra Leone in 2020, border guards didn’t ask me to show proof that I had been to a beginner African country, or question whether I was ready to take on an intermediate country. In fact, they gave me one look up and down, nodded, and waved me through without even asking to see my passport. One of the junior border control officials went to stop me, but his superior placed a gentle hand on his shoulder, and gave him a look that implied, “This man is clearly a hardened traveller… he’s ready”. 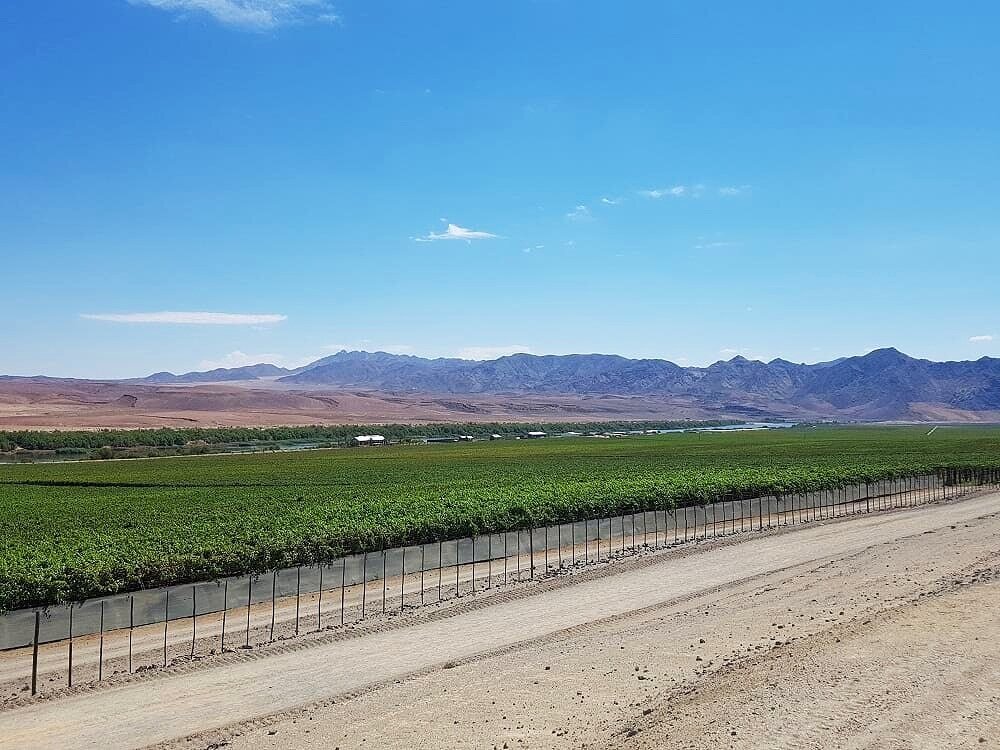 The vineyards of southern Namibia. We did a wine-tasting tour on our trip. Here, I confirmed on multiple occasions that the drink I was consuming “tasted like wine” or “like crushed grapes”. Given a staunch refusal to pretend – like others – that I could taste bouquets of other ingredients which were not used to make the wine, I was one of the sommelier’s least favoured tour members.

The border guard episode didn’t happen, obviously. I had the ignominy of being checked with all the other novice travellers. But I can accept why, in this instance, the beginner moniker might ring true for Namibia, even if it is a bit lazy. Namibia has a low crime rate, is Malaria free, and most people speak at least conversational English. Its campsites are among the best I’ve ever visited. While we still slept in tents, most of them had fully-stocked bars and some even had infinity pools. My friends and family back in the UK were under the impression that I was bush camping every night; rumours which I did little to discourage. 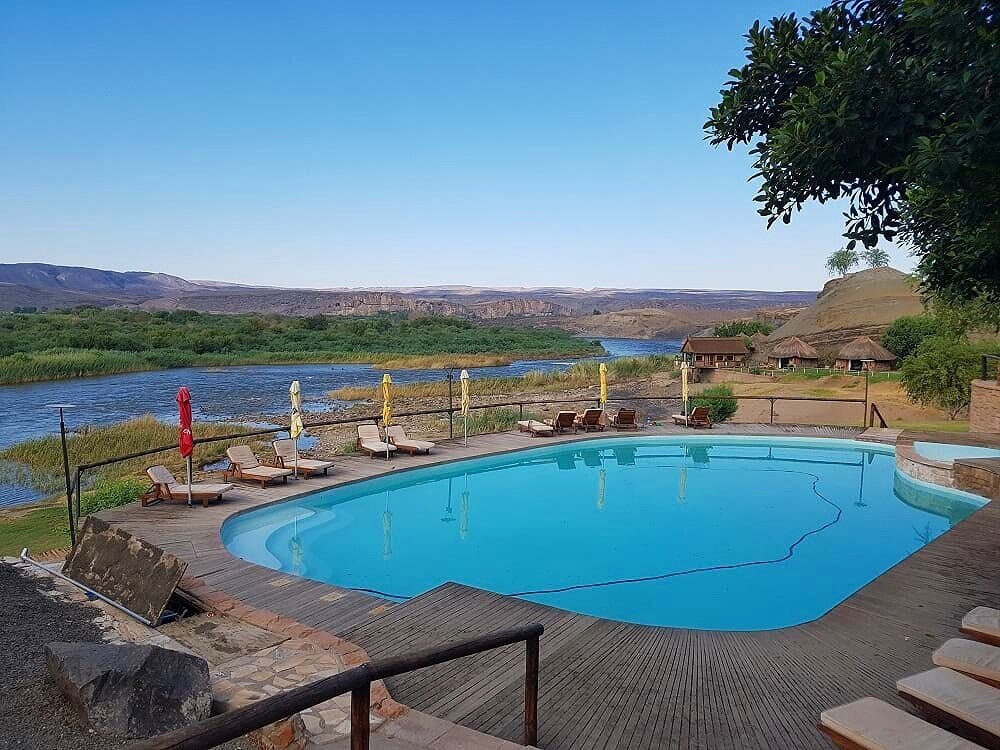 Bush camping in the brutal wilds of southern Namibia. 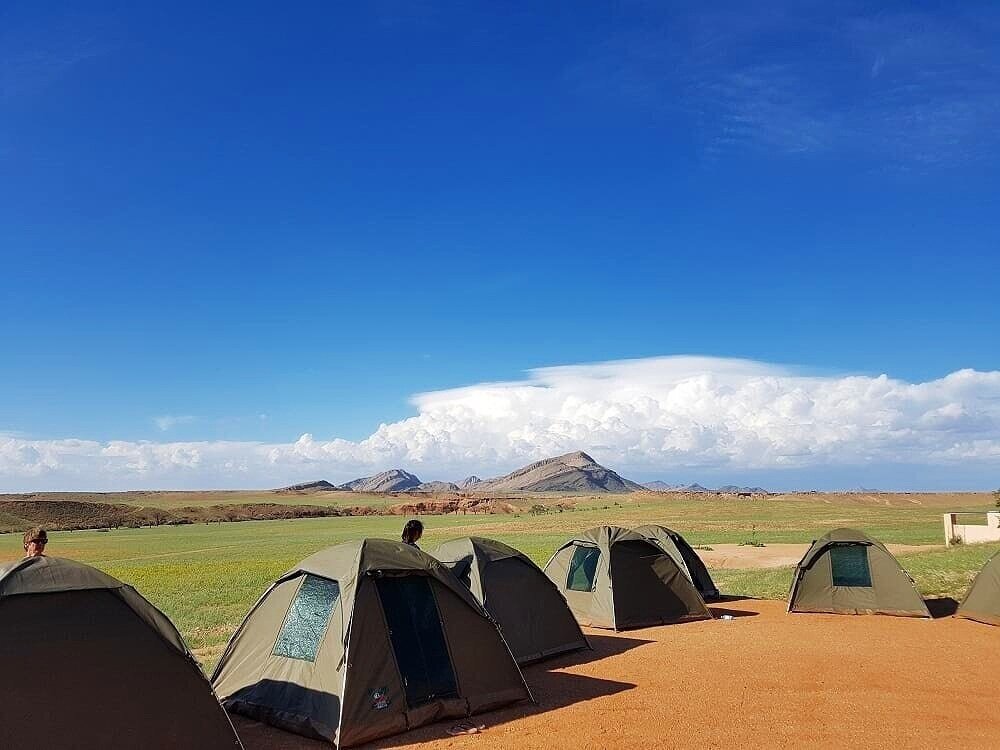 There was barely a day where we did not camp in stunning locations like this.

I visited Namibia on a 6,000km overland trip from Cape Town to Dar es Salaam, with Dragoman. Having driven across much of Africa on the trip, I can tell you that Namibia is the best destination for a road trip. For starters, most of the roads were of a decent quality, including the gravel ones. And traffic was never an issue. For that matter, we didn’t see many people at all on our trip. You could drive for ten hours without passing another car. This fun fact became reasonably alarming when we broke down in the desert one day, however, with no phone signal. We sat waiting to get help from the next car that passed. It was a six-hour wait, not made easier by the 40-degree sweltering heat. 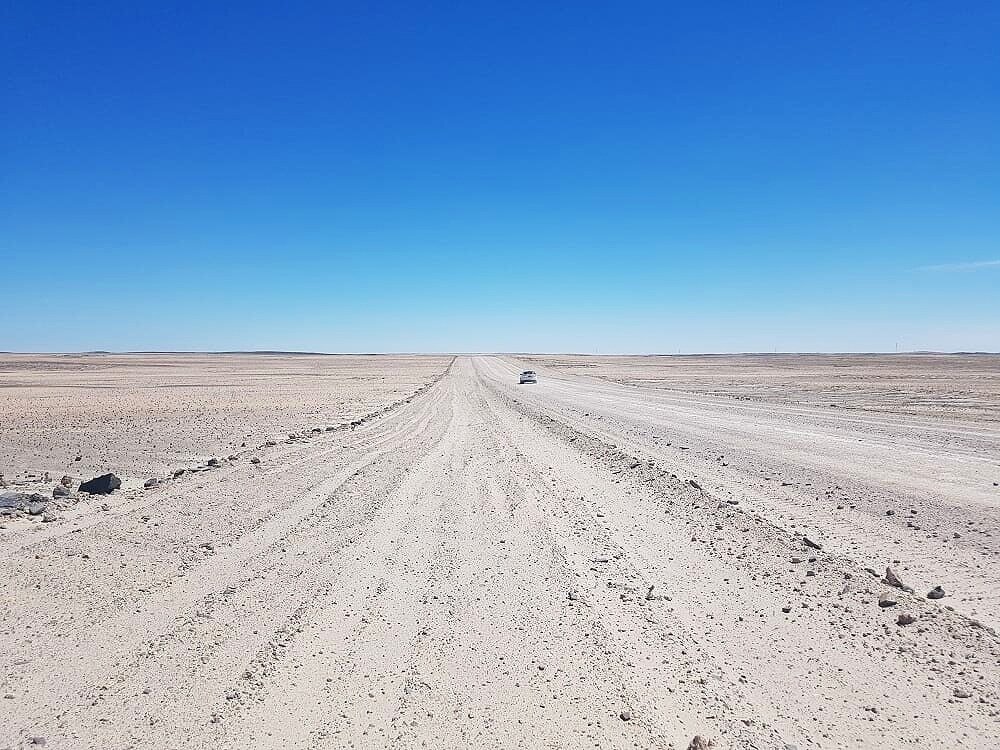 The Namib desert. We broke down shortly after I took this photo.

Where was everyone? Well, Namibia is one of the world’s least densely populated countries. Its population is 2.5 million, roughly the same as tiny Wales. But the country is larger than France in terms of area, and is 36 times the size of Wales. It’s no wonder, then, that people are a scarcity in this dry, arid land. Most of the other people you see on the empty roads are holidaying South Africans, or a few that come from further afield. Including some ‘advanced’ travellers, like this writer (I like to travel, remember?). 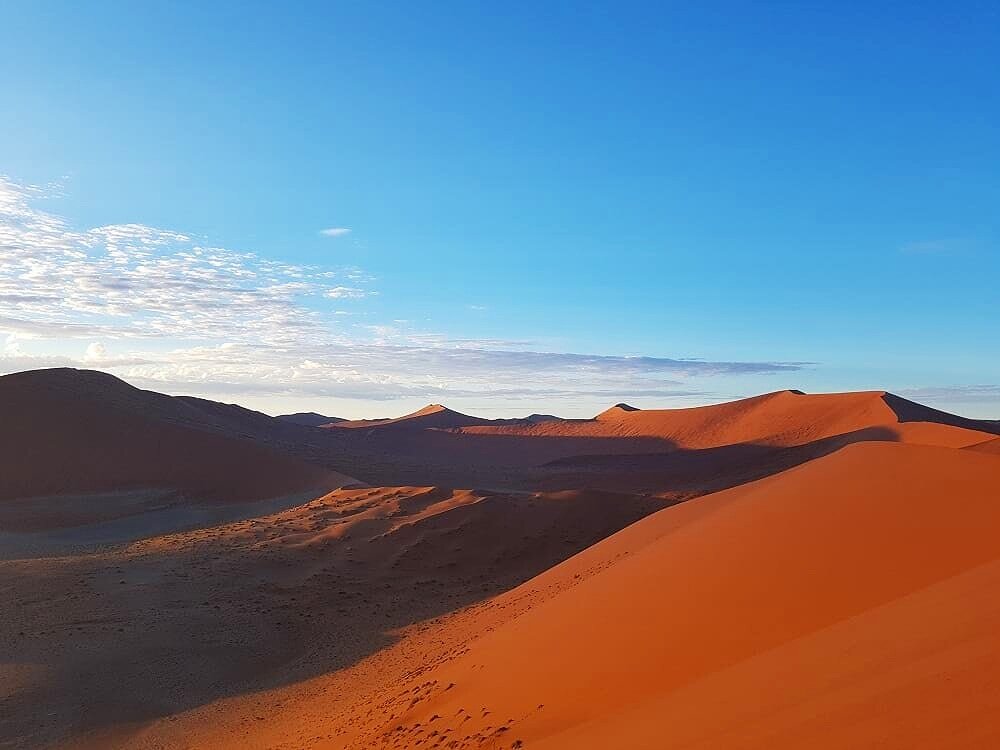 The Sossusvlei sand dunes at dawn.

An Escape From Humanity

Strangely, Namibia’s emptiness is what makes it so alluring. I’m not a nihilist and have a fairly positive view of humanity, but there are times when getting away from it all is certainly good for the soul. And in Namibia, doing just this offers you some of the most majestic camping experiences anywhere on Earth. The night skies – unsullied by light pollution – were the most incredible I have seen, bar maybe in the deserts of San Pedro de Atacama. We camped with the top layers of our tents off. Through the mesh, you could see the Milky Way splashed brightly across the horizon as you drifted off to sleep. If you paid close attention, it was possible to notice the gentle rotation of the earth, as the starry skies slipped off down into the horizon. It was never long before you saw a shooting star. 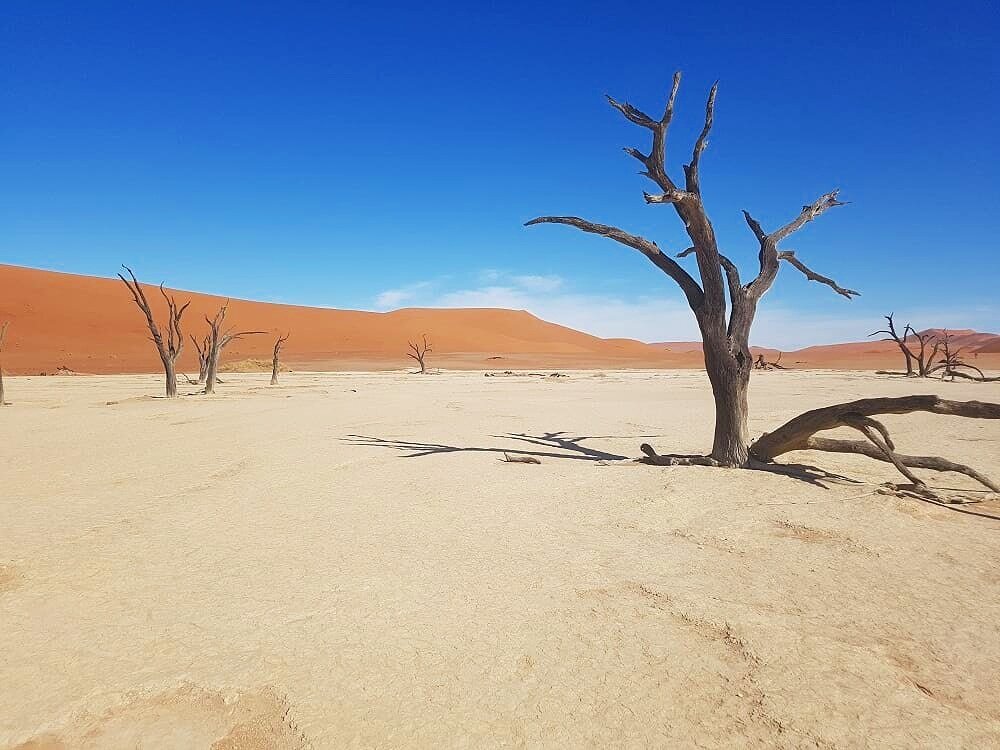 The otherworldly Deadvlei white clay pan. It might surprise you – given the scorched trees – that it was officially “a bit hot” when we visited. 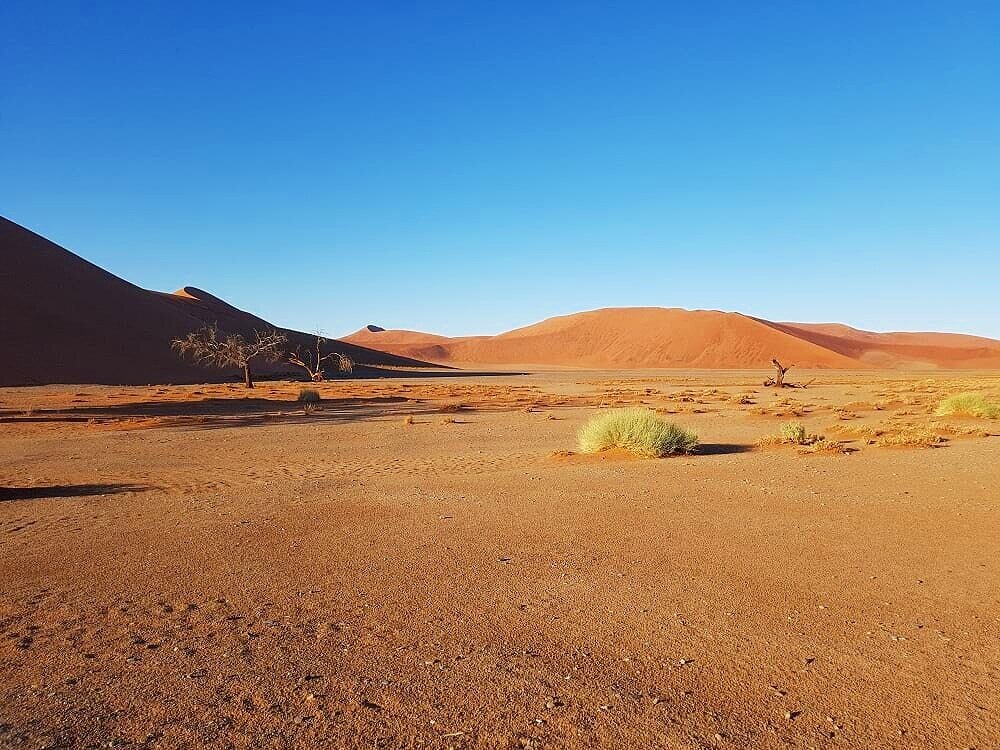 More pictures of Sossusvlei. We ate breakfast here, after scaling one of the tallest dunes for sunrise.

You can’t see stars in London, or across much of Europe. Stephen Hawking famously said, “Remember to look up at the stars and not down at your feet”. This is much easier to do when you can actually see them. You never feel as small or as insignificant as when you watch the stars. You can’t ignore the truth of our predicament: we’re stuck on a small rock, rotating around just one of an estimated 1,000,000,000,000,000,000,000,000 suns that exist in the Universe. Your problems seem a little smaller when you’re viscerally facing this truth. For the night skies alone, Namibia is well worth the visit. 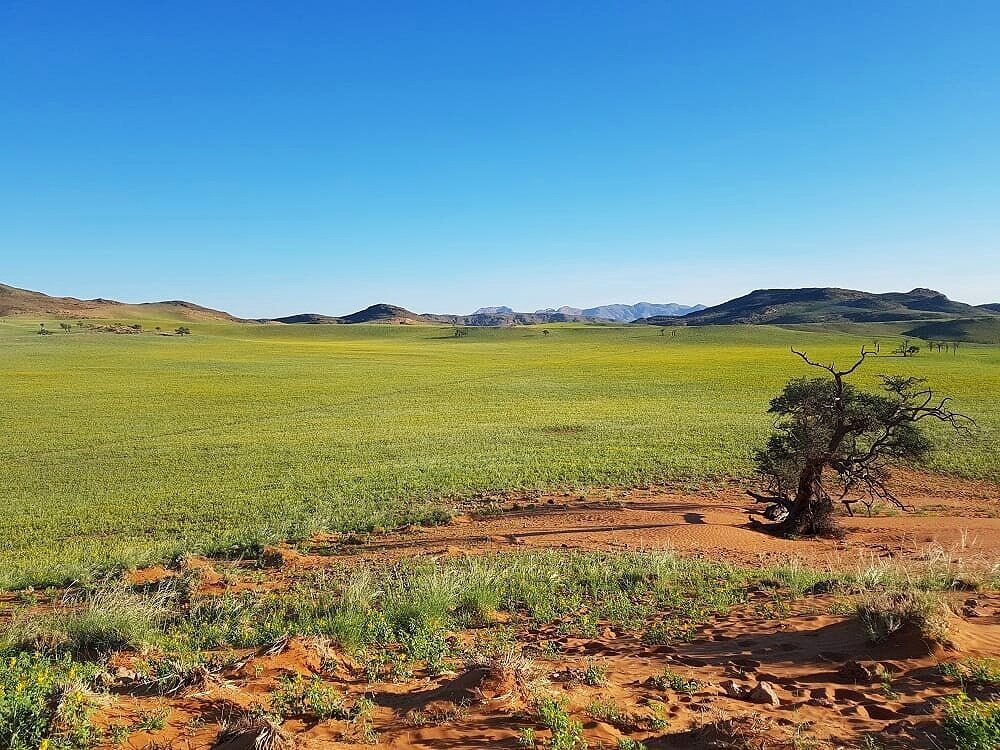 It rained during our visit to Namibia, a very rare occurrence. This turned the deep red earth green within just a few short days, as this picture depicts. 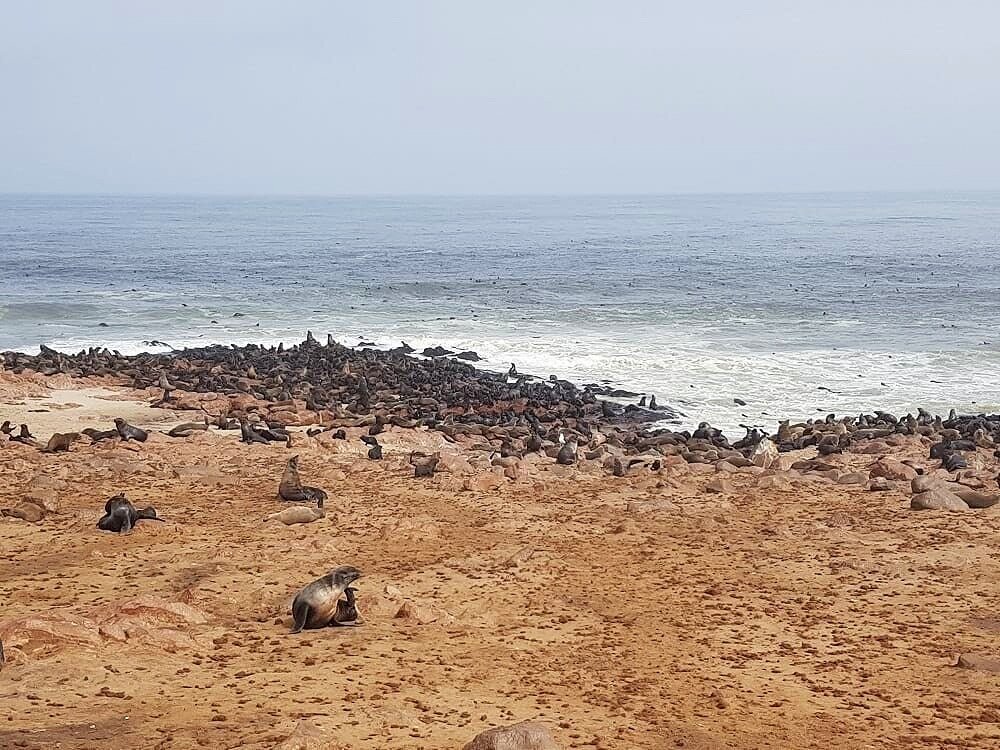 Cape Cross Seal Reserve. Fortunately, we as a species have not yet developed technology that allows us to capture and replay smell.

While the driving distances are large, the long hours spent on the empty roads are a key part of any Namibian road trip. If you have a couple of weeks, and start in the south of the country and head north, the following sights are a must: 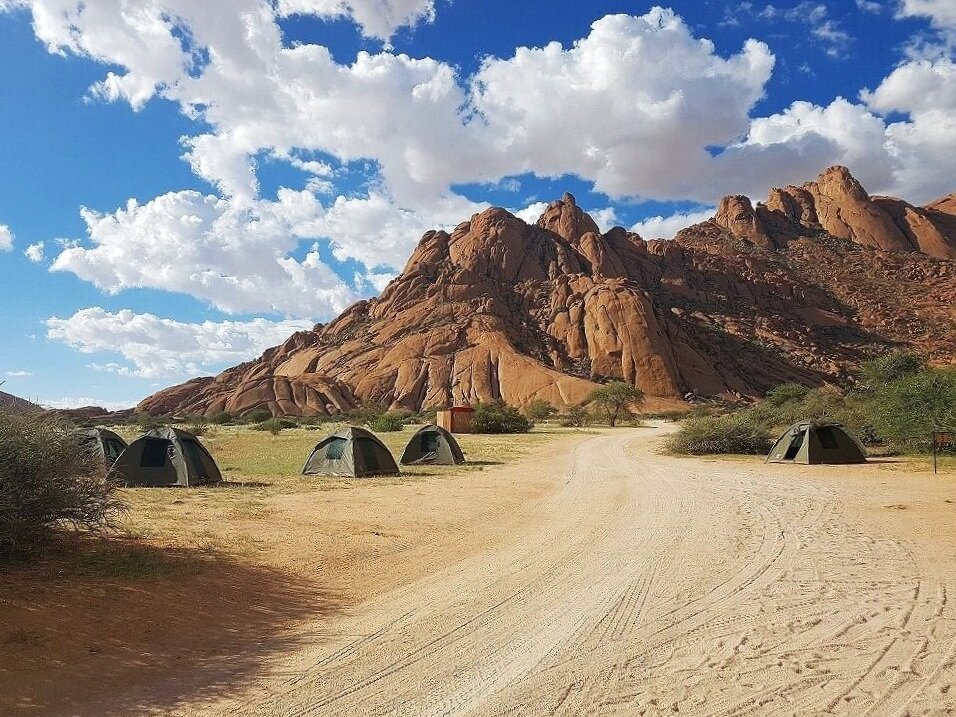 Spitzkoppe. The most beautiful place I’ve ever camped. We climbed the boulder at dusk, and saw the empty nothingness spread onto the horizon. I scarcely remember feeling so detached from the rest of humanity. A place which offers true serenity, true peace.

Given the degree to which I’ve gushed over this enchanting country, why did Ethiopia pip Namibia at the post? Well, the lack of people has its downsides. None of the cities is particularly alluring. There are some interesting snippets of German colonial architecture dotted around the country, but it’s clear that nature is the reason for any visit to Namibia. Ethiopia has an abundance of natural beauty too. But with over 109 million people and having never been colonised, the unique culture and traditions of Ethiopia mean that it narrowly beats Namibia as the best place to visit in Africa. At least in the mind of one advanced traveller. 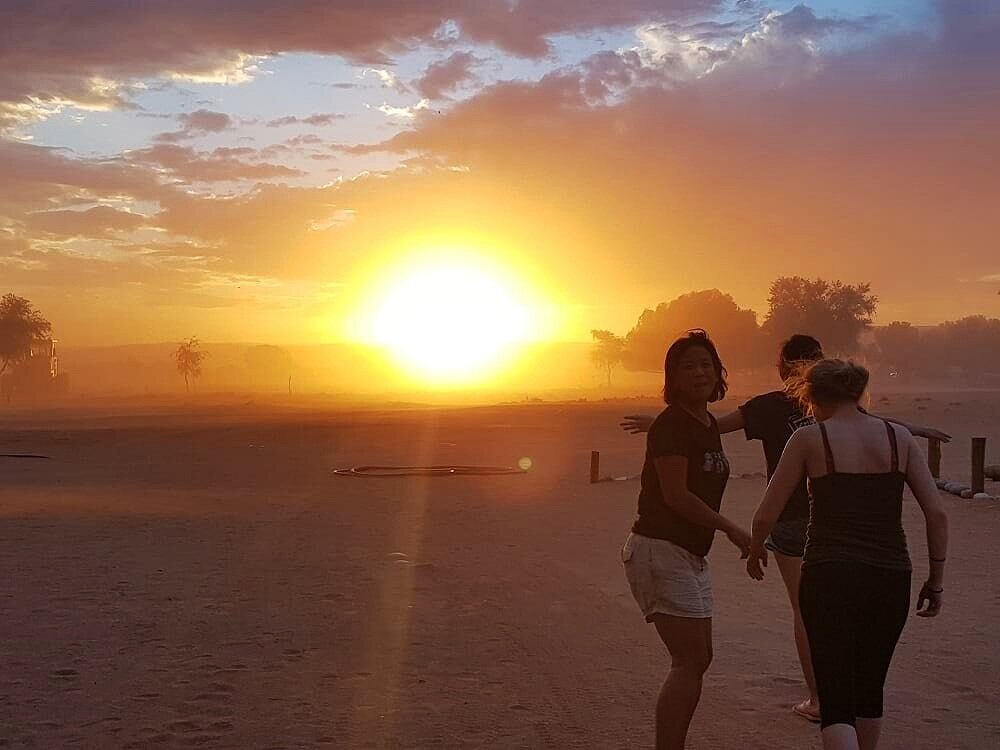 When the wind blows, you’re treated to some fairly epic sunsets in Namibia.