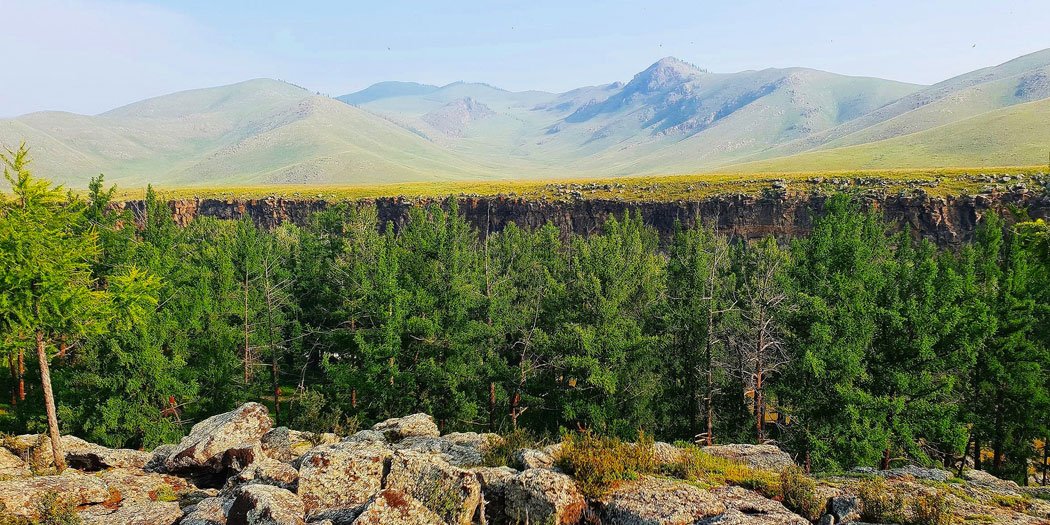 Country #136. Mongolia is both green and serene. I would also like to say clean but that would be disingenuous. In visiting this magical land, its position as the world’s least densely populated country becomes very clear. Immediately. Half the country’s three million residents live in the capital, Ulaanbaatar. The remaining 1.5 million live largely nomadic lifestyles in rural areas. Once you leave the capital, that’s pretty much it for around 500 miles in any direction.  What’s left is lush landscapes, dotted with ger huts (yurts), and horses. And, rather more conspicuously, the gigantic, lurid-orange Dragoman overland truck, which was to be my transport for the best part of two weeks. 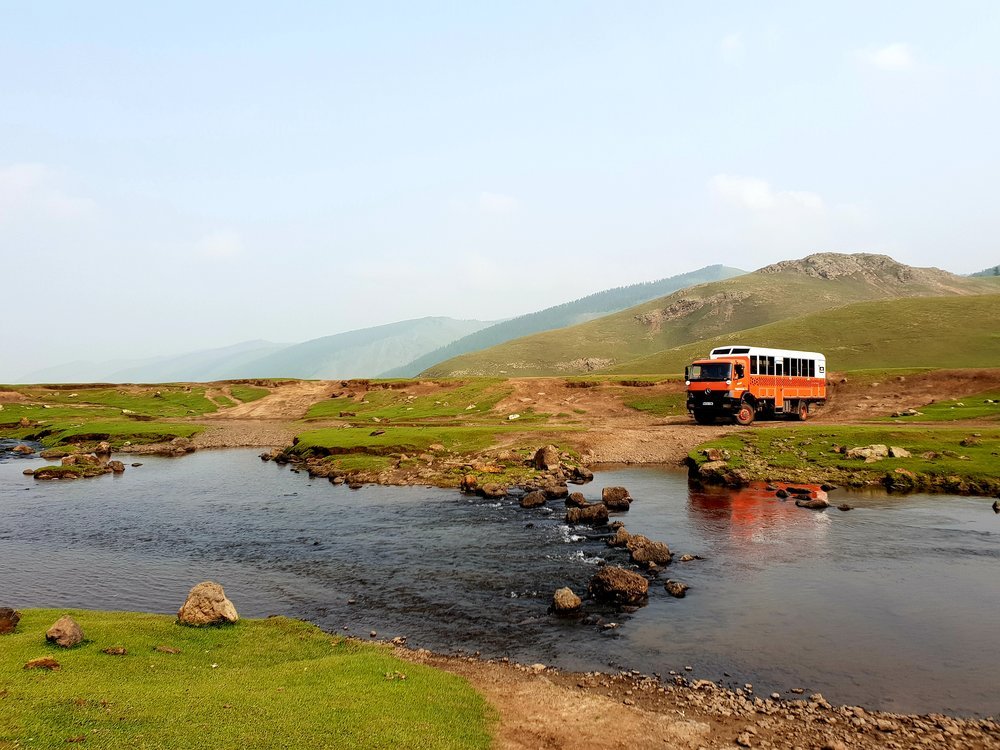 Tallulah, our truck. She started her journey in the UK. 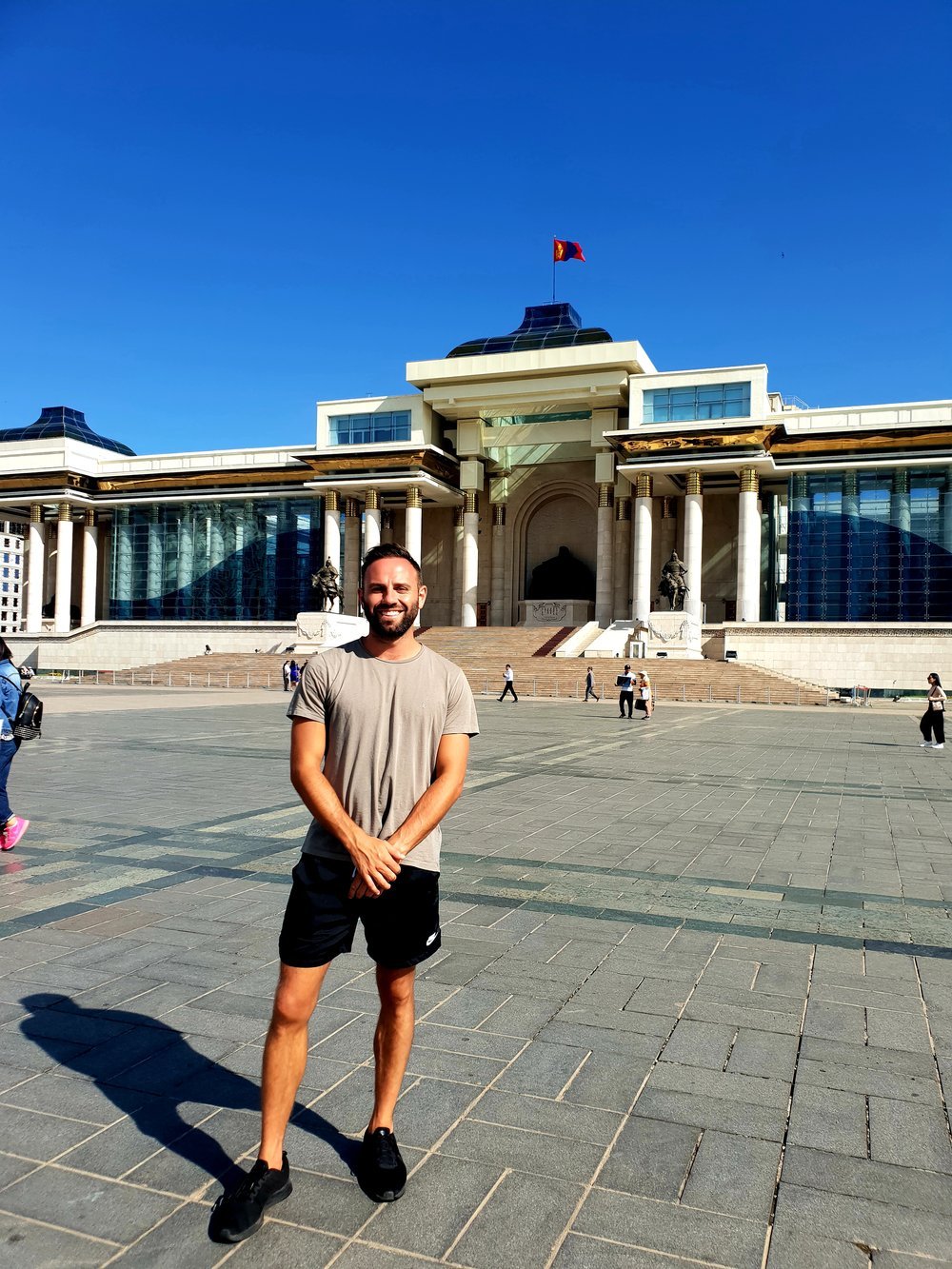 That dark blob in the background is the Genghis Khan statue. Not sure why I’ve lined up for this photo like I’m about to defend a free kick.

It’s hard not to begin this article without mentioning the Mongolian big man himself, Genghis Khan. He was a man of many skills. His ability to ride a horse was perhaps only surpassed by his ability to terrorise people and conquer Eurasia in the 13th century. He is still very much the symbol of Mongolia. You arrive at Genghis Khan Airport. His face greets you on the local currency notes (the tugrik).

There is a rather unflattering statue of him outside the Government Palace in Ulaanbaatar, which implies he either had very strong horses or became fat later in life. Locals delight in regaling tales of Genghis’s all-conquering exploits. We were told by our lovely guide Namjin that Genghis laid the foundations for the Mongol empire, which went on to become the largest empire in Earth’s history. 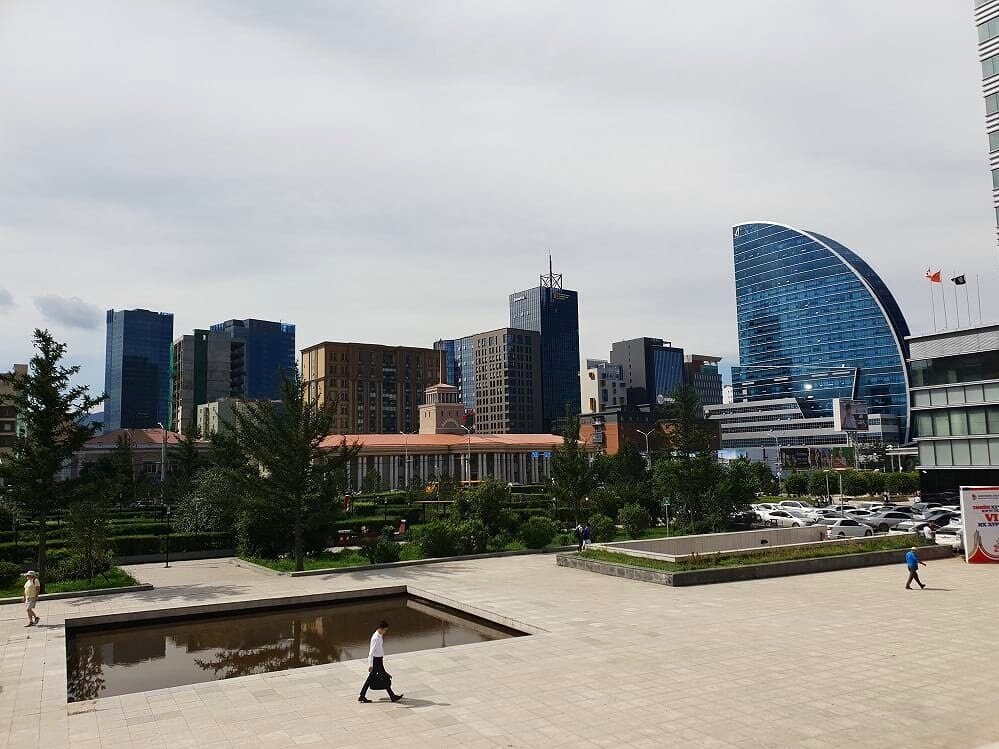 Parts of Ulaanbaatar are quite modern.

“Britain had the largest empire on Earth actually,” I was tempted to interject. But then I quickly remembered that I am not a Brexiter. And that being overtly patriotic about anything is in itself misguided. If a nationalist was honest, this would be the basis of their worldview: “I had no control over where I was born, nor have I contributed to any of my country’s perceived successes. But I was born here, therefore it must be the best!” To be fair, Genghis would have been well placed to take advantage of the nationalist tide sweeping the West. For starters, his rampaging exploits actually forced the Chinese to “build that wall” (the ‘Great’ one). His followers could have worn local hats (loovuuz) with catchy slogans like “Yes we Khan!” Or, reluctant to stray too close to the blue-side of the US political spectrum, “Surrender or we will murder everyone in this village,” which would have also been more accurate. 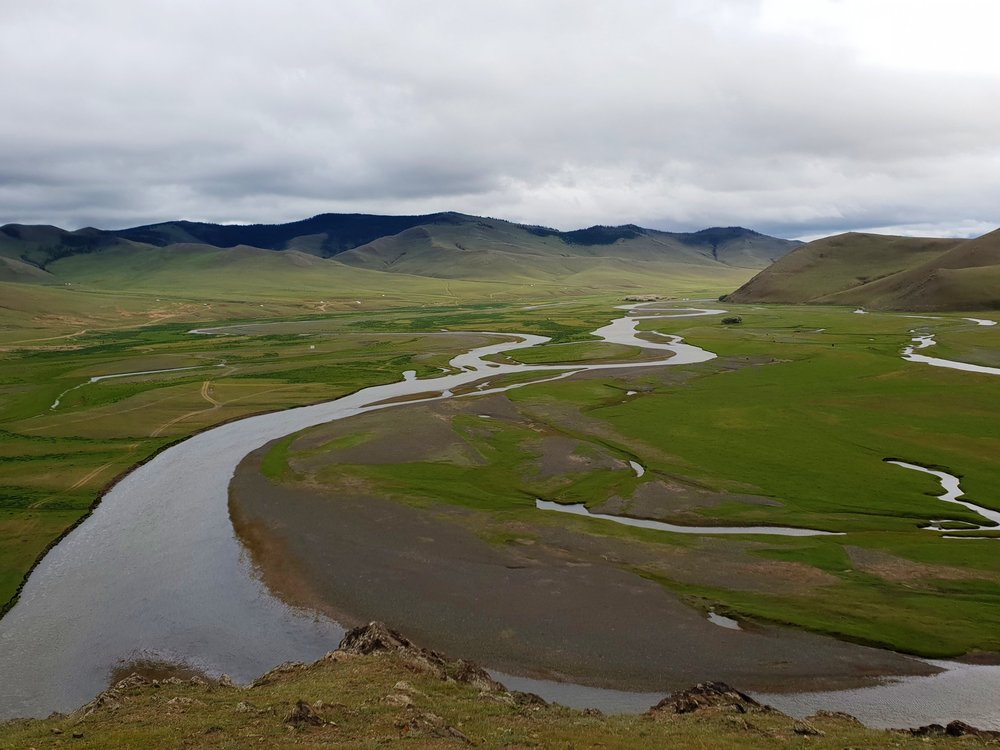 When the weather is poor, which fortunately it wasn’t for most of the trip, Mongolian scenery is similar in parts to Iceland or the Faroe Islands.

Travelling on an overland bus is a great way to see remote countries like Mongolia. On our Dragoman truck, we had food and camping equipment. We could rest assured we wouldn’t die if we broke down. Something that is not impossible to imagine, given the lack of mobile phone and internet connection in most places. Or any modern human’s woeful survival skills. Camping was a delight, particularly given Mongolia’s incredible star-filled night sky, where the vivid outline of the Milky Way was often clearly visible. Only San Pedro de Atacama in Chile or the deserts of Namibia top the Mongolian stars in my view. 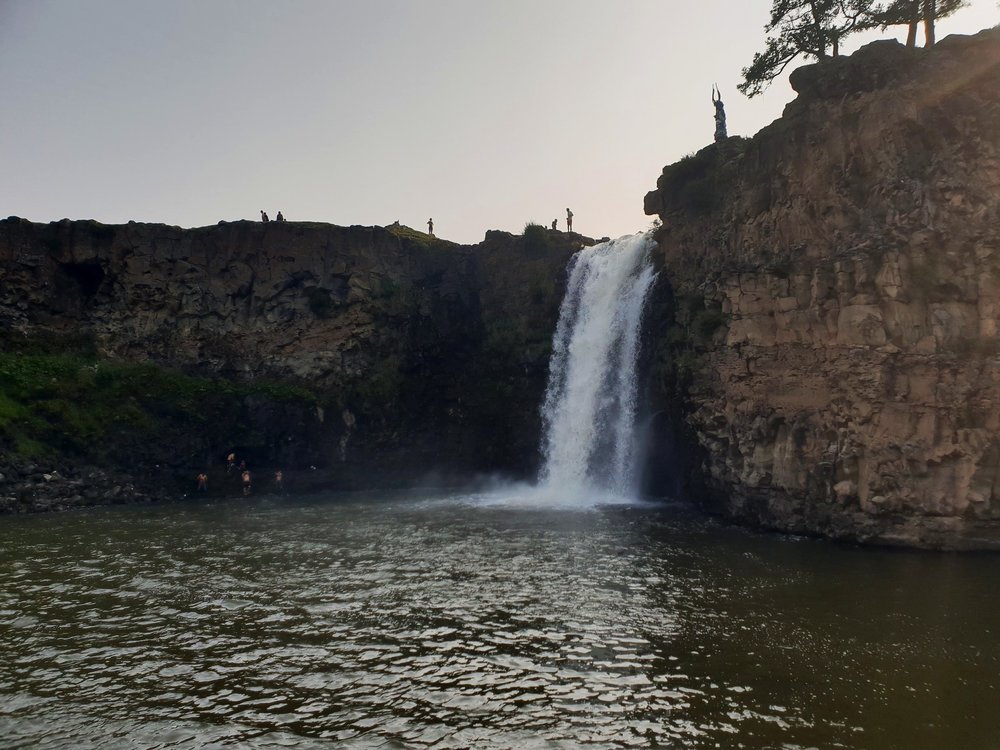 A waterfall pouring into a lake.

Some of the camping locations were epic. Highlights included staying near a waterfall in Orkhan Valley, where you could hear rushing water as you slept, and ger camping by the beautiful Ogii Lake. Lowlights included having to go the toilet in a hole in the ground. And one night my ger mate Rich requested extra logs on our fire due to the cold. An unexpected night spent in a sauna ensued. 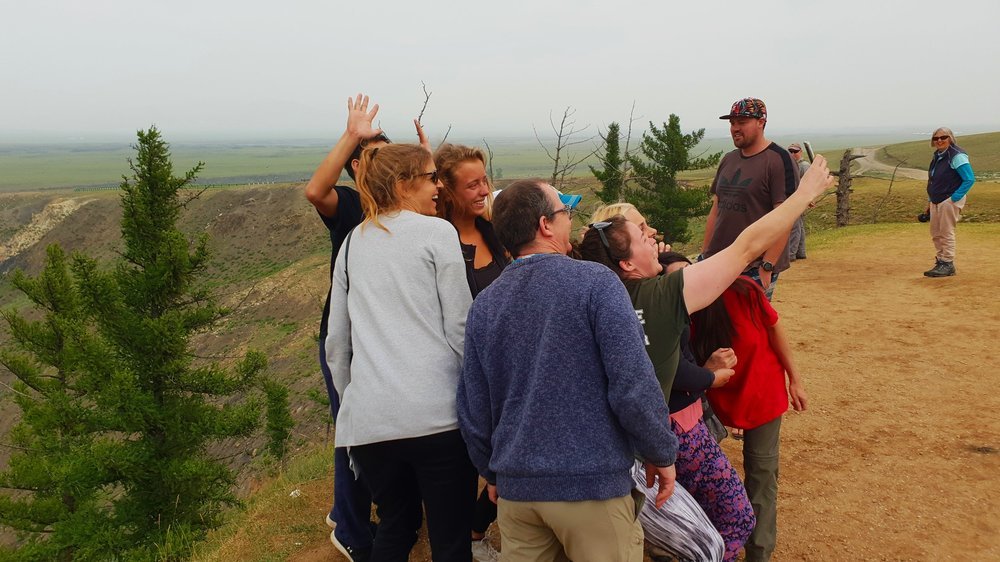 The Dragoman group. They narrowly avoided falling into the gorge, and thus did not add to the scary statistics about the number of people dying in the quest to take the perfect Instagram photo.

It was also refreshing to take a break from looking at or touching the small rectangular object I carry around with me at all times. It’s hard to realise that repetitively watching funny dog videos won’t ultimately make you happy (at least in the long term), unless you look up occasionally. And the Mongolian wilderness is truly a sight to behold. 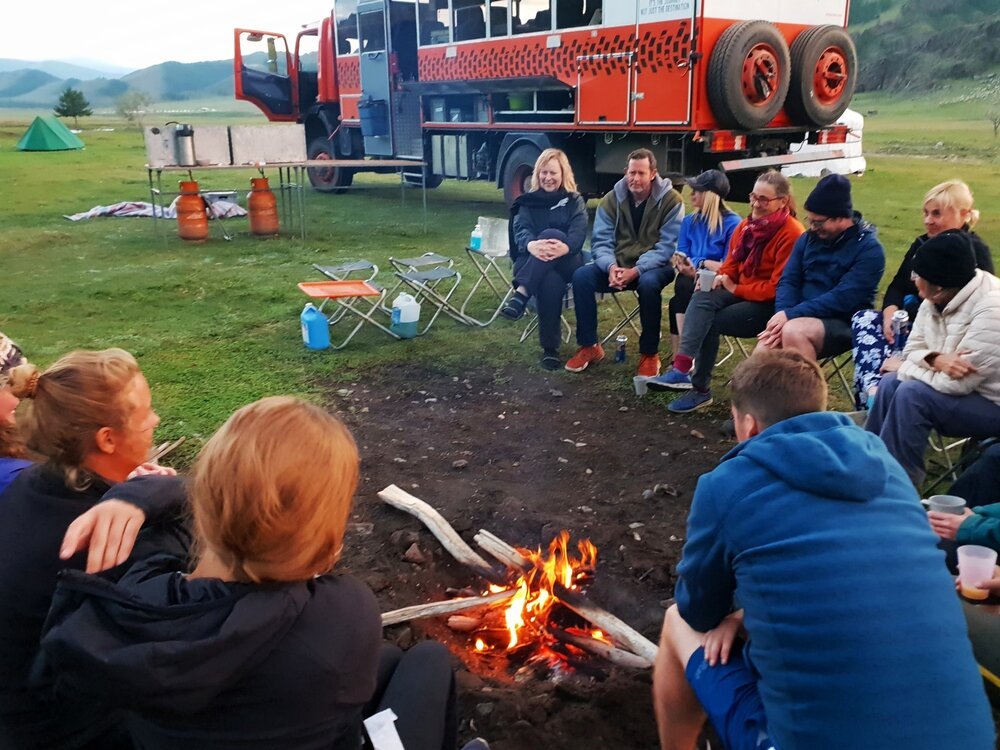 A group of fellow travellers surrounding an open fire.

Indeed, one of the best parts about overlanding is that riding in the truck is part of the journey. In England, sitting in a car for two hours feels like a lifetime. Here, watching the scenery roll by is part of the experience and you don’t begrudge it. Gazing at endless undulating hills and lush grasslands was strangely hypnotic, even deeply relaxing. This is fortunate, given that 30 miles can take five hours when you are off road. Part of the trip was also learning not to judge others for their poor taste in music, and resolving not to lash out at whoever put on the noughties R&B playlist for us all to endure. 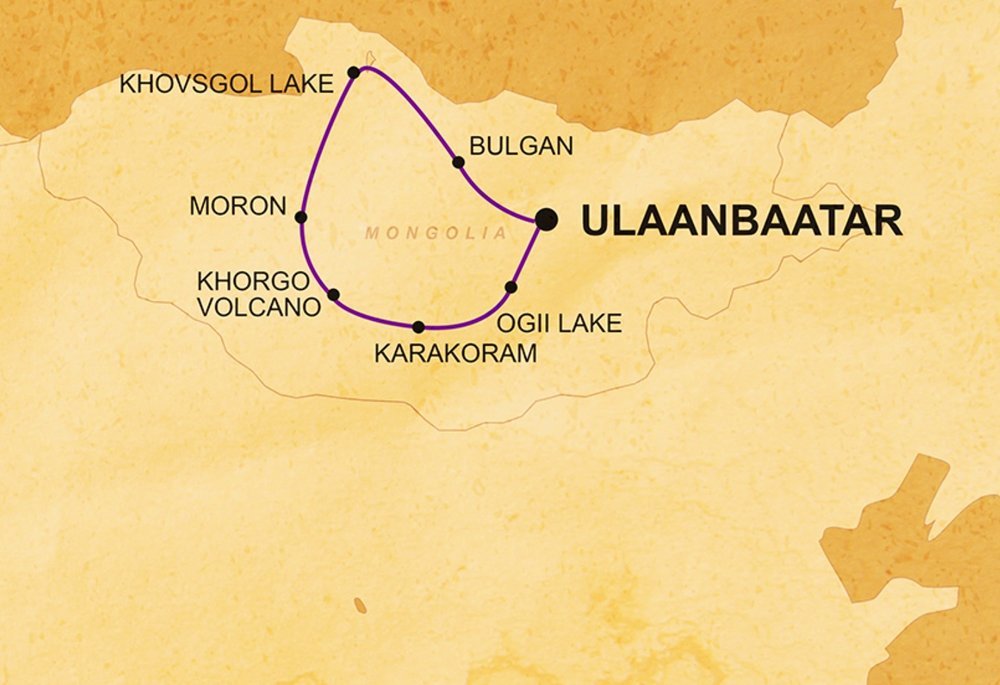 A map of Mongolia.

A Small Drive Around A Big Country

I’ve included a map of the route we took around Mongolia, which is not quite to scale. In reality, we covered much less of the gigantic nation. Hiking in the wilderness around the Tsenkher hot springs was a delight. Trekking up to and around the Khorgo volcano was also brilliant. Or would have been, had a karaoke disco held in a ger the previous night not got out of hand, leading to unnecessary consumption of cheap local vodka. 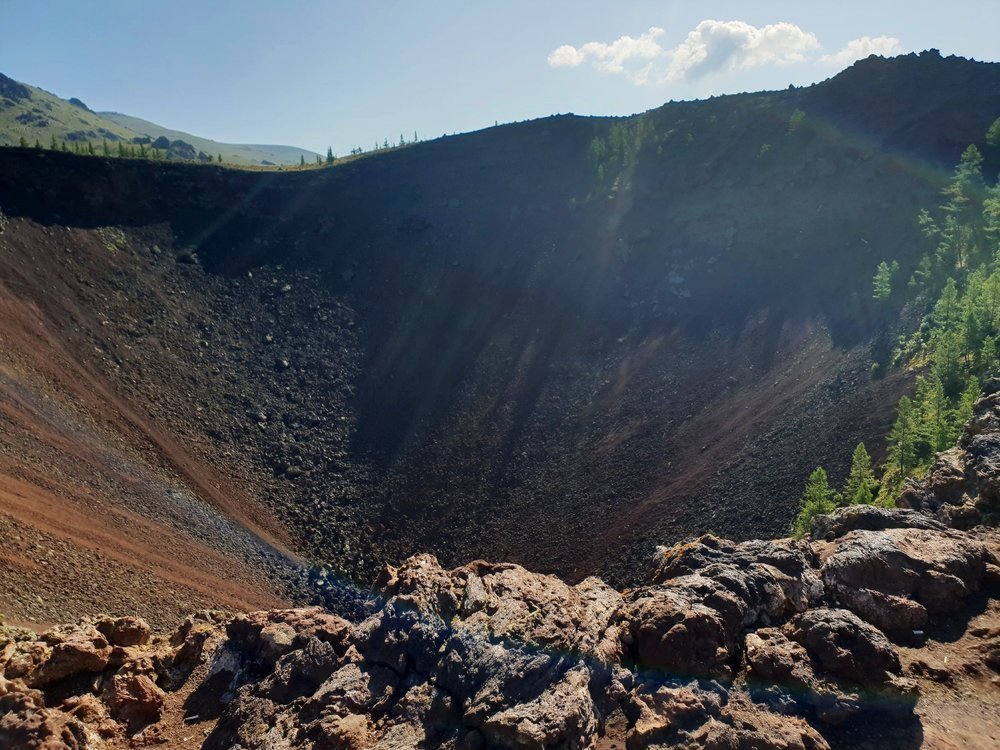 The historic city of Karakorum was also one of the highlights of the trip. It was the old capital of the Mongol Empire, and is filled with ornate tombs and ruins. It’s one of the few places in Mongolia where you can still find artefacts from the empire. An occupational hazard if you live a nomadic lifestyle where few permanent structures are actually made. To this day, this remains the case. We stayed in many ger camps over the course of the trip. None were more atmospheric than our homestay with a local family in Khorgo-Terkhiin Tsagaan Nuur National Park. 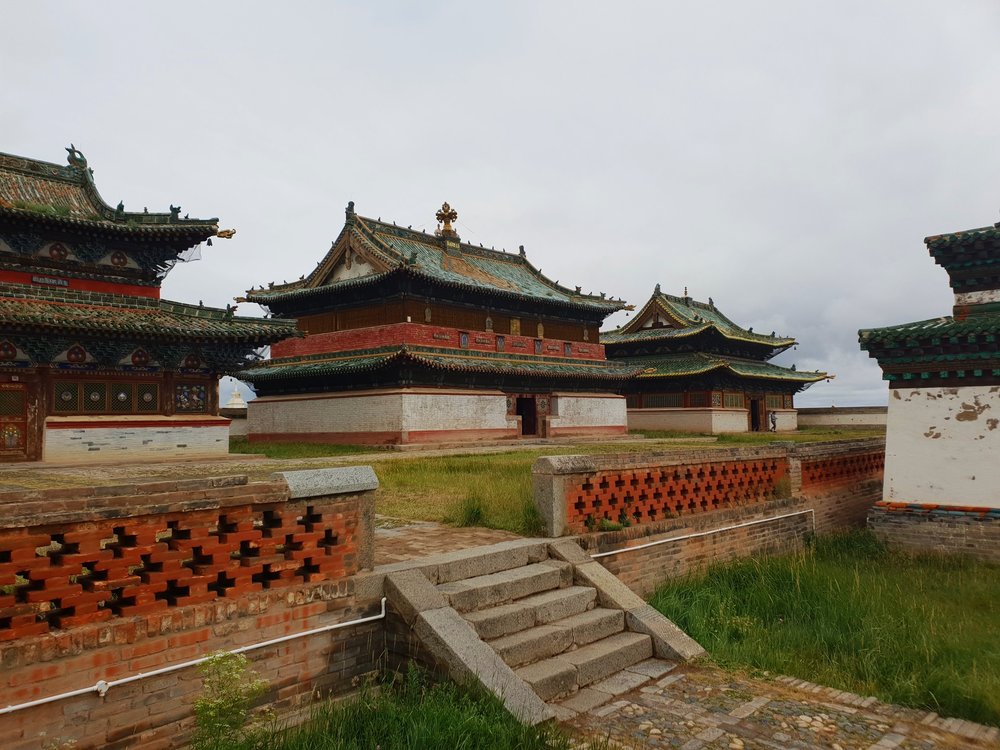 The ruins of Karakorum, which served as the capital of the Mongol Empire.

The family have lived the same way for generations. Children as young as five or six hop on horses to round up local yaks. The family still lives off the land, which must become challenging when temperatures drop to -40°C in winter. Rumour has it some of the nomadic families have diets made up entirely of meat in winter, given that growing anything becomes almost impossible for many months of the year. 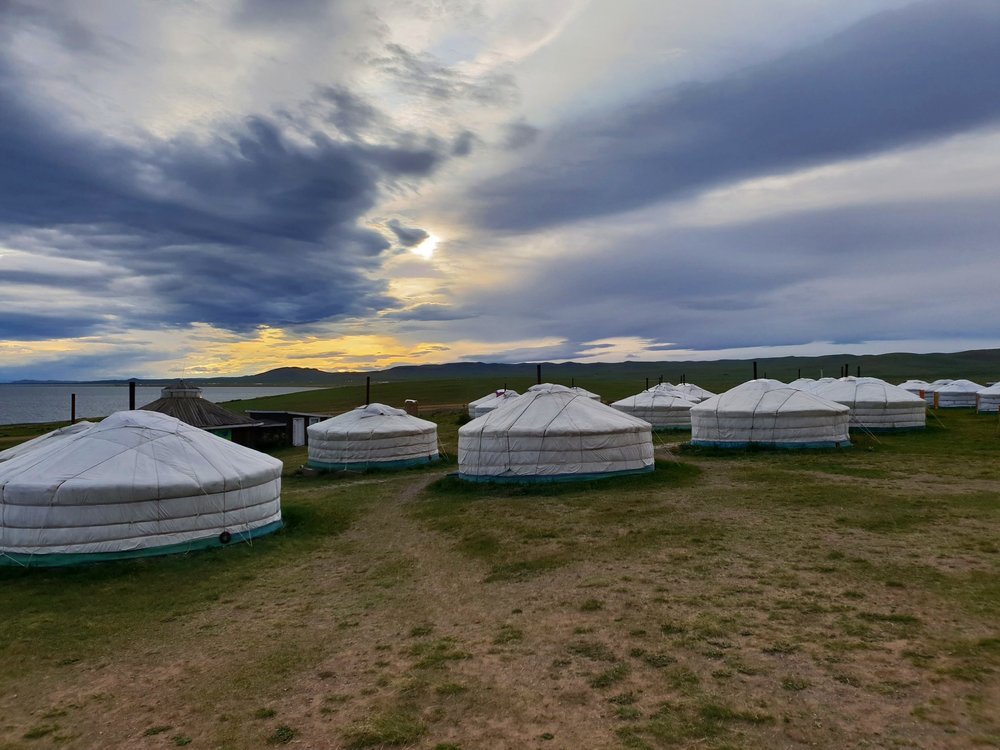 A Mongolian ger camp. Despite being generously proportioned, you will spend half the night boiling (when the stove is going) and the other half freezing (when it goes out).

That said, technology still permeates even the most remote of places these days. Motorbikes have replaced horses in some areas. Almost every car is a Toyota Prius, making up an astonishing 60% of car imports last year. Many gers have satellite dish TVs. And the elderly lady in our homestay had an iPhone. 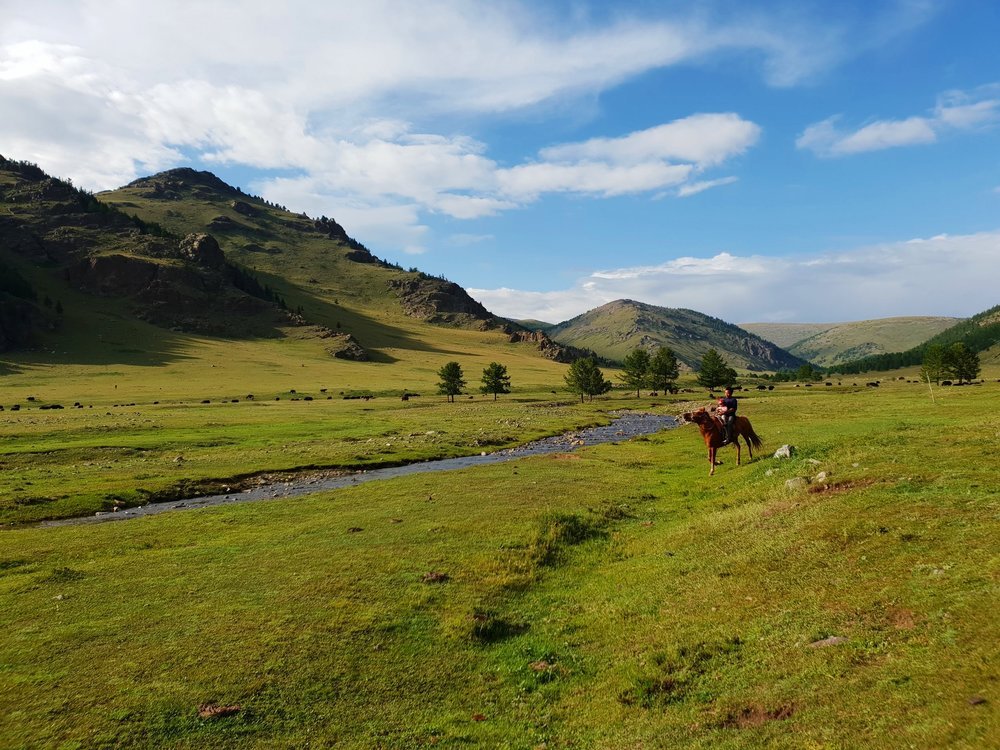 If you look closely, you can see the nomad teaching his two-year-old how to ride. In the West, children are so mollycoddled that they are probably not allowed to even look at a picture of a horse, let alone ride one.

If you just thought, “He’s spelt the word ‘steppe’ incorrectly, how stupid,” then I’m afraid you are a philistine. It was a clever pun. Look it up. This aside, Mongolia does appear to be moving in the right direction. Economically, it still lags behind other major Central Asian economies like Kazakhstan. But Mongolia does stand to benefit from China’s gigantic and illogically named ‘Belt and Road’ (B&R) infrastructure programme. 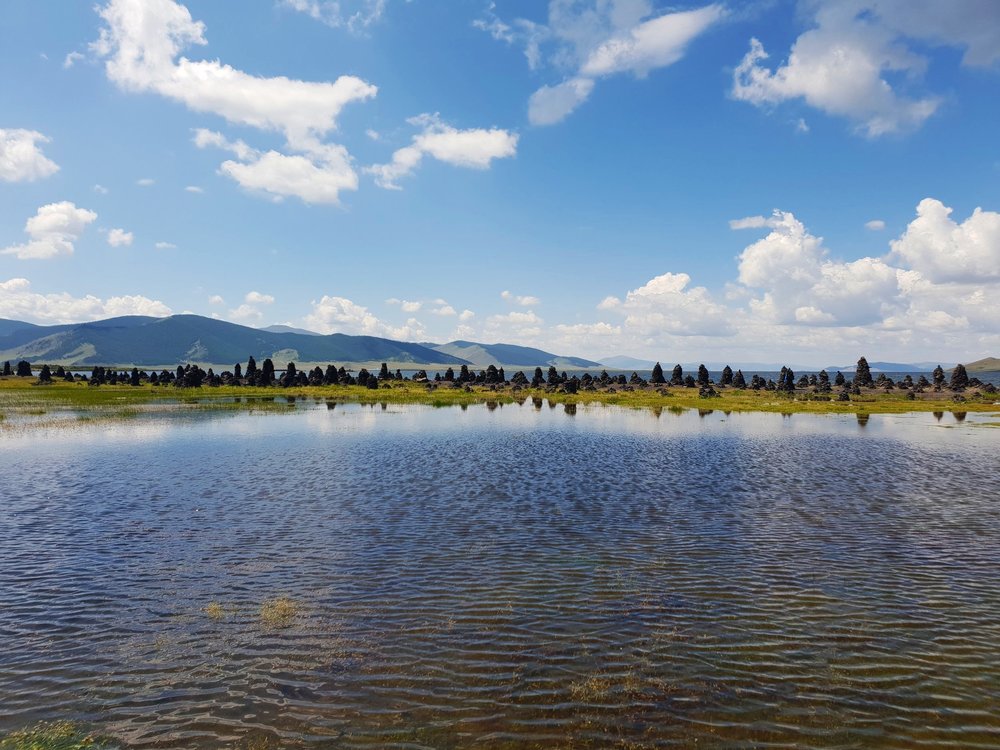 This is quite a nice picture of Lake Terkhiin Tsagaan. Like all people who take a photo considered to be ‘good’, there comes a point at which you start to believe you are somehow responsible for the topography shown within it. I certainly did after this photo.

The idea is to build a maritime road and an overland belt of new transport infrastructure to improve links between China and Eurasia. And also massively increase China’s soft power in the process, often through offering loans which are hard for countries to pay back. So, if anyone in the Chinese government is reading this, then all I will say is that… China is a great country. Everyone there is very nice. Everyone is free and happy. Go China! 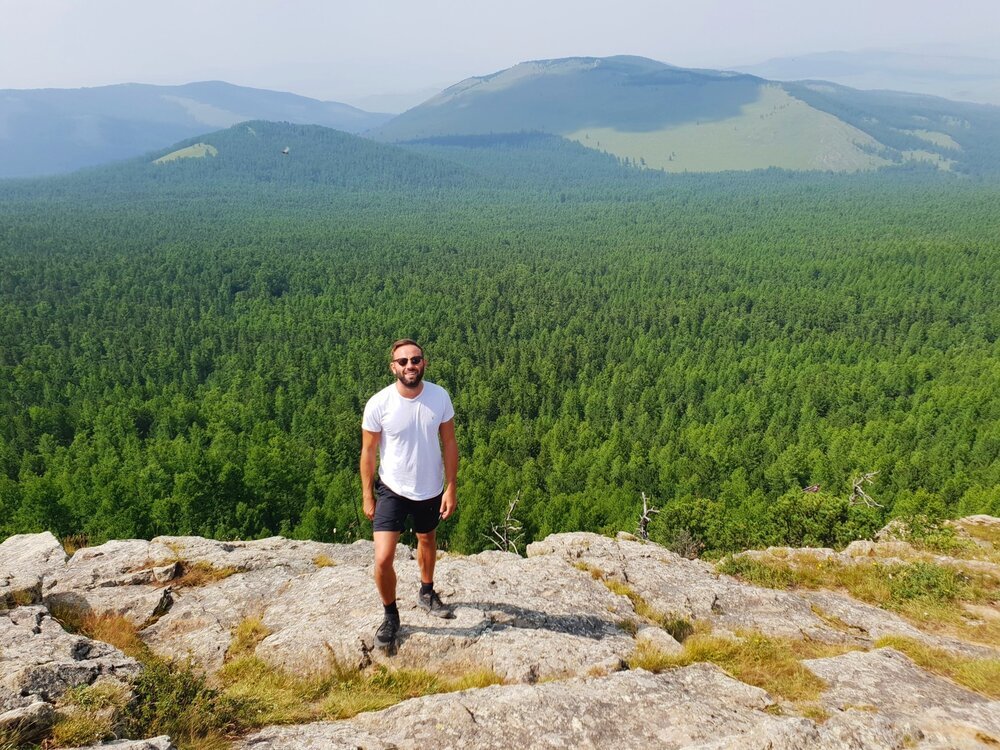 At the summit of the Tuvkhun Monastery.

I retrospectively changed that last sentence, as I hope to be allowed to visit China in the future. The B&R is pumping billions into Mongolia’s economy. So much so that there are express lanes at the airports for B&R officials. Mongolia still relies largely on coal and copper mining for economic growth, with 95% of its exports going to China. Assuming it can keep China on side, Mongolia’s small population means that overseas investment can make an outsized positive impact on the local population. One hopes that throughout this process, the country’s unique nomadic lifestyle survives in one form or another. 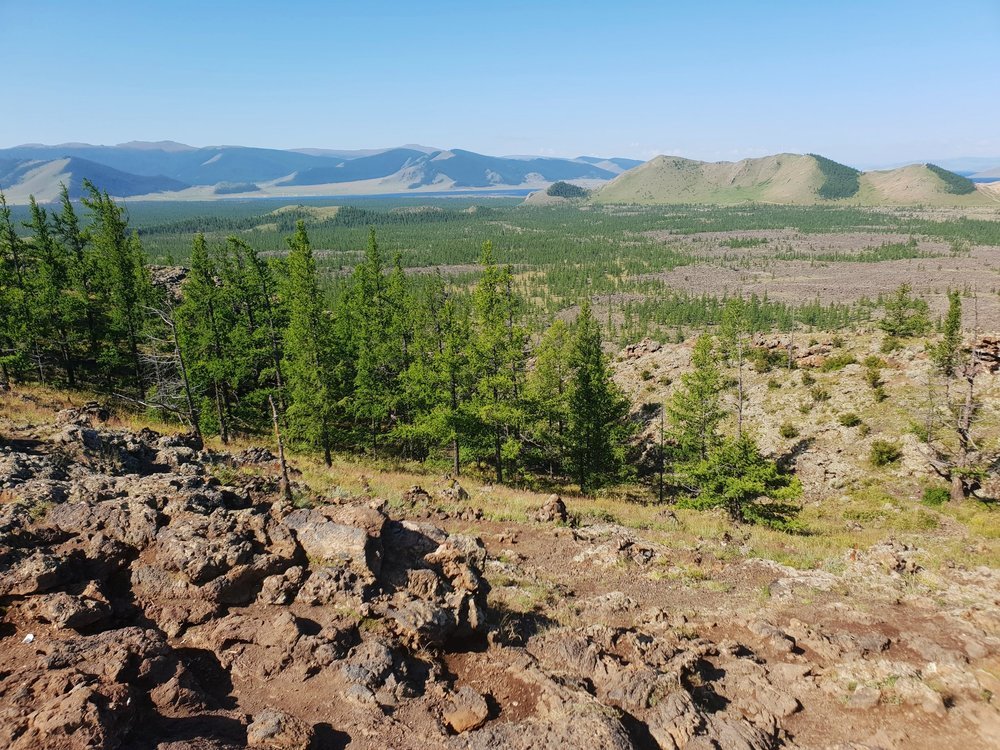 The OK-ish view from the top of Khorgo volcano, mentioned earlier.

I bode a sad farewell to Mongolia and the Dragoman truck. I was due in Tokyo, so had to leave the truck a few days earlier than the remainder of the group, in a town called ‘Moron’. It turned out to be an aptly named departure point, as the shock of landing in the world’s largest metropolis, from the world’s emptiest country, made me feel like one.

Next Post: Japan – A Love Letter To This Truly Enchanting Country