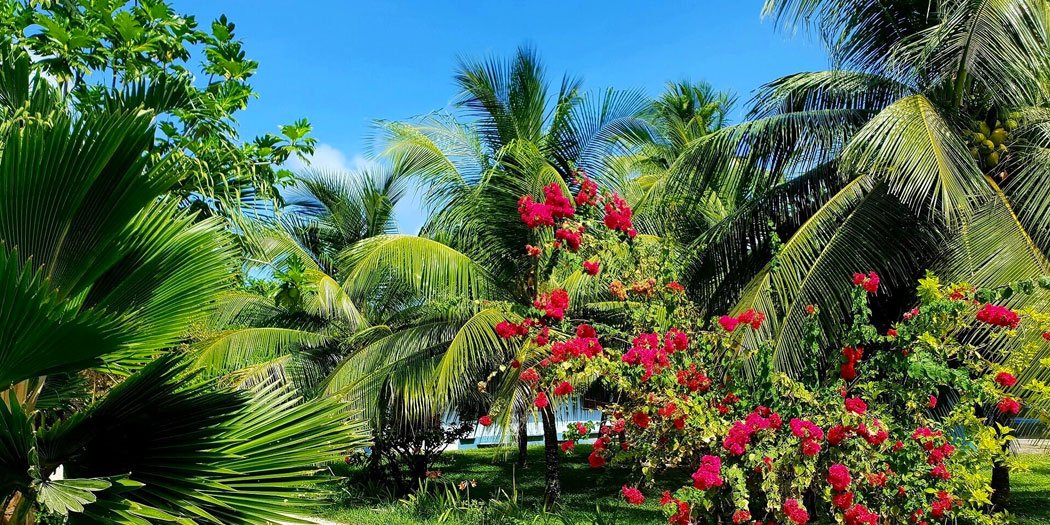 Country #148. Having just visited Nauru and Kiribati, by the time I visited the Marshall Islands it was becoming oddly normal looking at a map and seeing my little red dot surrounded by endless blue ocean. The Marshall Islands are a remote chain of islands in the Pacific Ocean, made up of 29 atolls. As the picture below shows, an atoll is perhaps the strangest shape imaginable for an island. And likely the most inconvenient, from a “let’s build a properly functioning nation on this area of land” perspective. 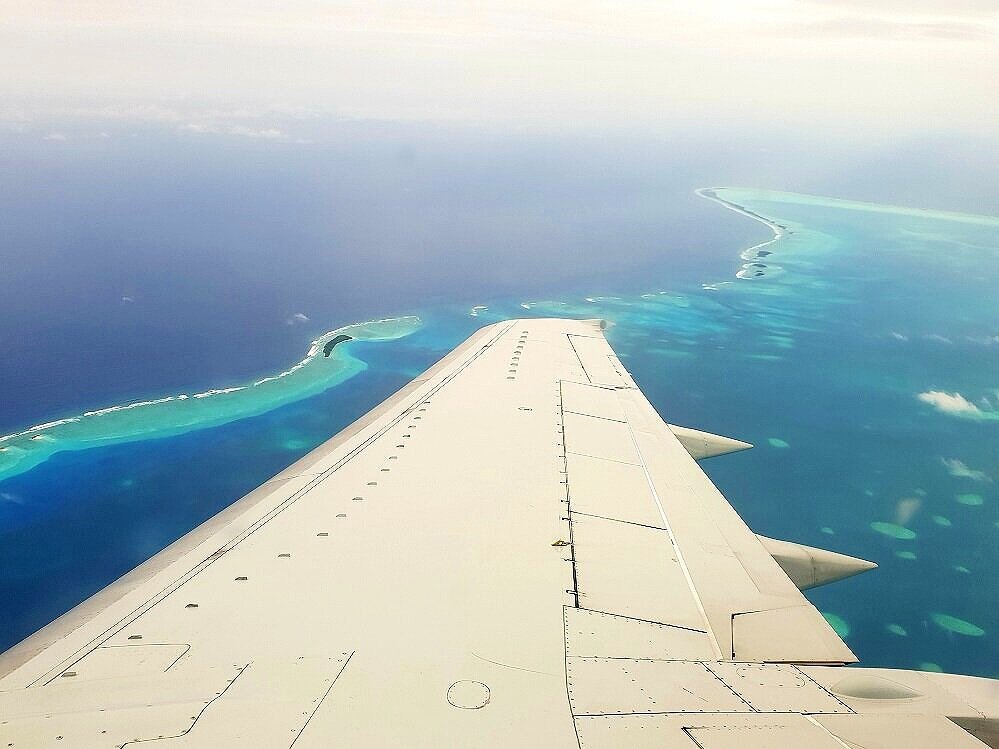 Flying over the Majuro atoll, in the Marshall Islands.

I visited the Majuro atoll, which is the country’s capital. It’s shaped like a thin ring, with a turquoise lagoon in the middle. It’s usually no more than around 20 metres wide, large enough for a road and perhaps a building or two. It’s so narrow that land had to be reclaimed just to accommodate the width of an airport runway. While the outer islands are supposed to feel desolate, Majuro certainly didn’t. With 25,000 people squeezed into a tiny land area – over half the country’s population – the Majuro atoll would be one of the most densely populated countries in the world were it to be an independent nation. 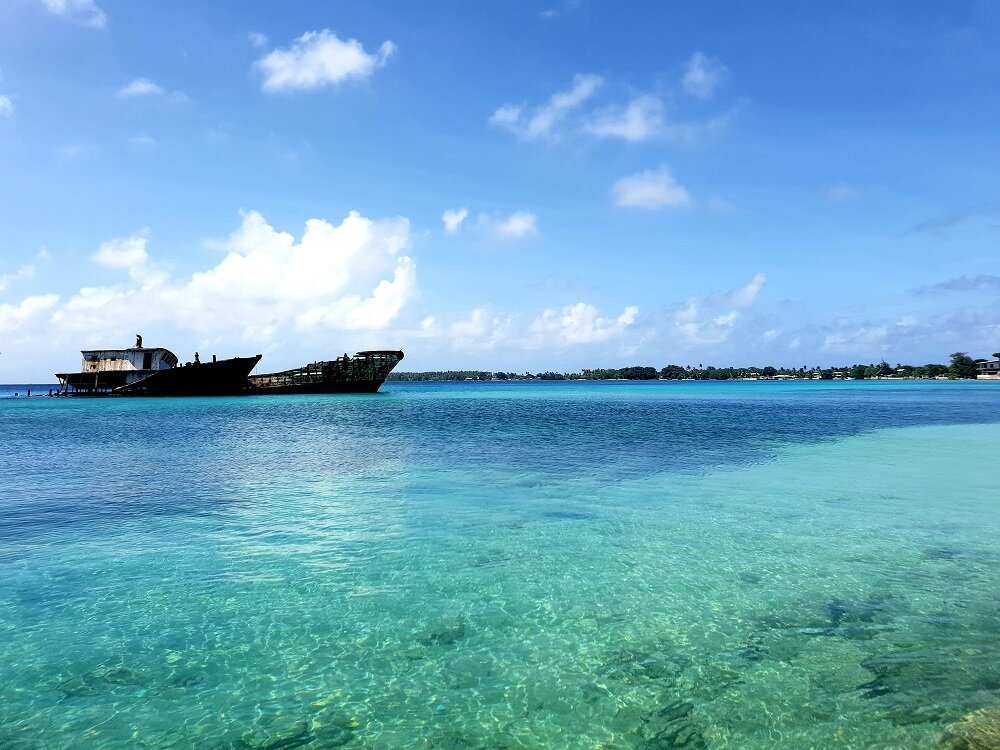 Turquoise waters are common in the Marshall Islands. Like litter, which I have cleverly cropped just out of shot in several of these photos.

If you’ve heard about the Marshall Islands, which probably you haven’t, it’s most likely due to the country’s challenging recent history. The US pushed the Japanese out of the islands in 1944 during WWII. Shortly afterwards, the US designated the Marshall Islands (and some other smaller nearby islands) as the ‘Pacific Proving Grounds’. From 1946 to 1958 the US tested some 23 nuclear weapons in the waters of the Marshall Islands. Having been an effective nuclear testing site and thus ‘proved itself’ very capable of being bombed lots, the US granted the country independence in 1979. A slightly one-sided deal in my view. If you missed the pun in the subheading, pay closer attention in the future.

Marshall Islands. Perhaps cruelly, I couldn’t ignore the fact that this tree appears to resemble a mushroom cloud.

Despite notional independence, during my visit I was struck by how Americanised the nation still feels. The dollar is the currency, people speak English with an American twang, and the coffee is poor. It reminds me of American Samoa, which is a melting pot of Polynesian and American influences. Perhaps unsurprisingly, the outward migration of Marshall Islanders to the US is leading to population decline. 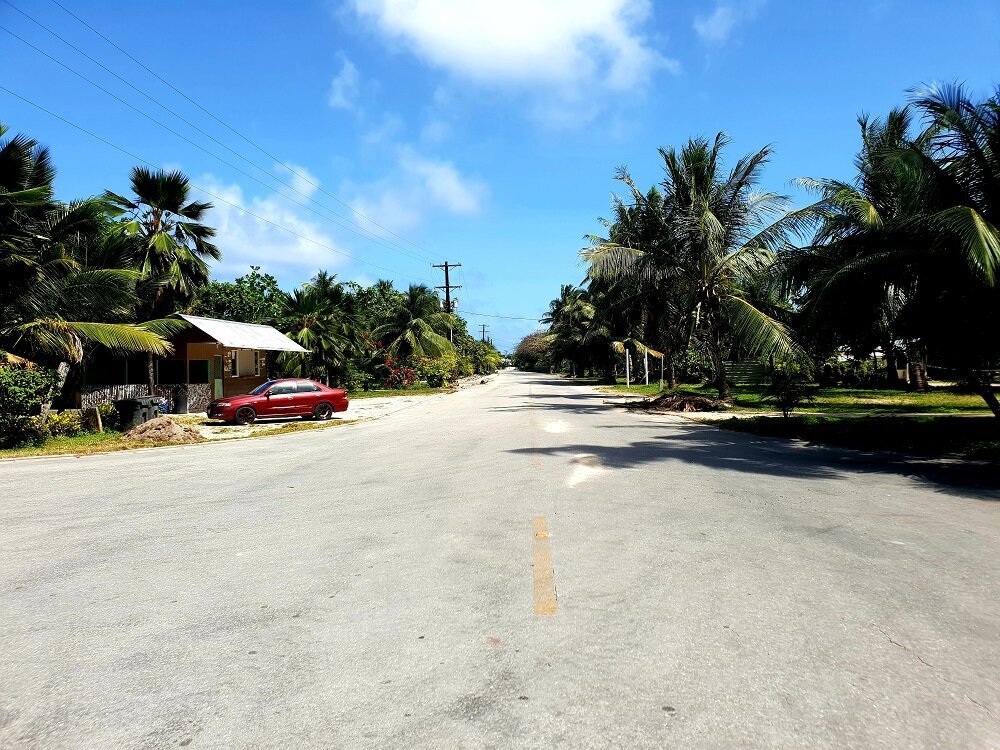 Empty streets like this are fairly commonplace in the Marshall Islands.

There are few young adults here, and the older ones talked of their sadness that the young have left. The atoll did at times have the feeling of a ghost town, in spite of being densely populated. The large coastal road was largely empty. Rusty shipwrecks dotted the inner lagoon and many of the colourful dilapidated buildings were in various states of disrepair. 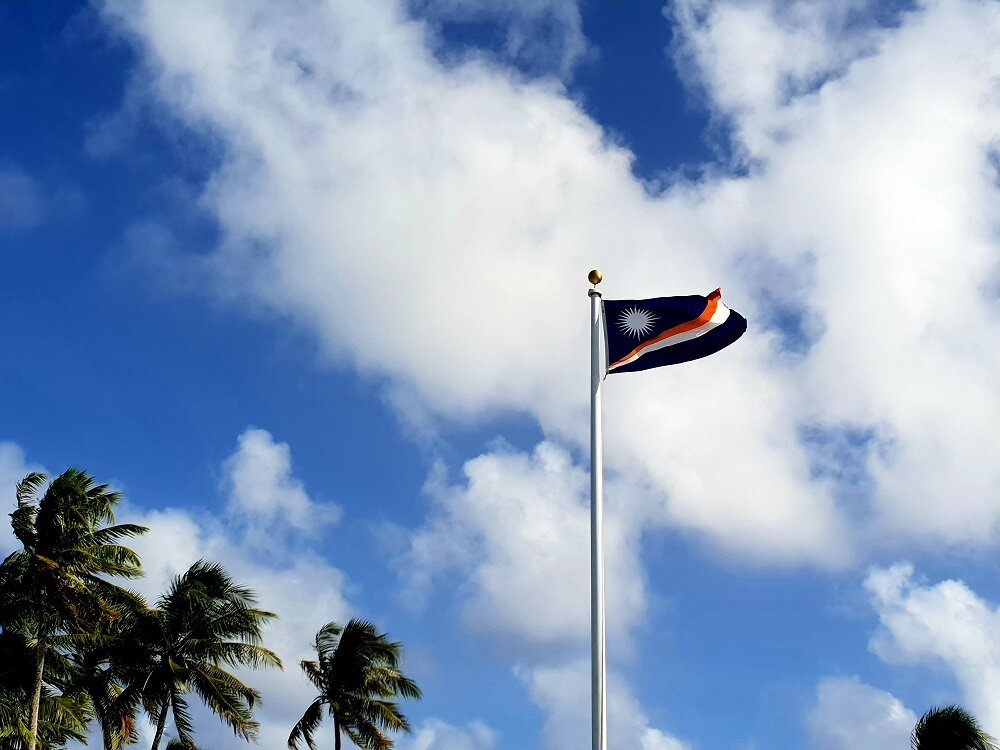 The flag of the Marshall Islands. Another cracker from a Pacific Island nation. If only having a cool flag could translate into more substantial successes as a nation. 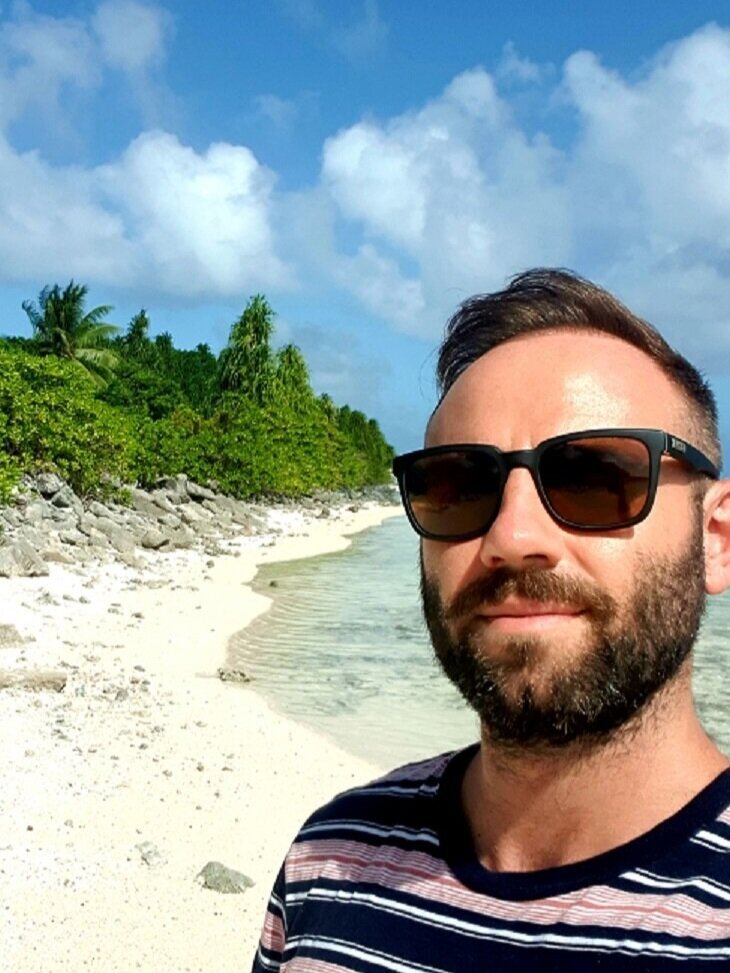 Including photos like this slightly unnerves me. I kind of feel at least one photo – as usual with my massive head obscuring most of the composition – proves that I have actually visited each country I say I have.

The most notable of these is having no land suitable for agriculture, and being as geographically isolated as it is possible to be. Like in many Pacific Islands, I was struck by how aware you are of the infrastructure and planning needed to keep a human society alive. In London for example, I can have my pretentious coffee, eat my pretentious smashed avocado on toast, and then dispose of any waste conveniently afterwards (in a recycling bin).

It doesn’t cross my mind to think about how any of these things arrive at or get taken away from the pop-up, gluten free, vegan coffee shop that a righteous millennial like me would presumably visit. It all happens behind the scenes, out of sight. There’s no room for that here. Shipping containers are splayed seemingly randomly all over the Marshall Islands. Large container ships bob around in the lagoon. Sadly, a lack of effective refuse disposal means litter is a common sight wherever you go. 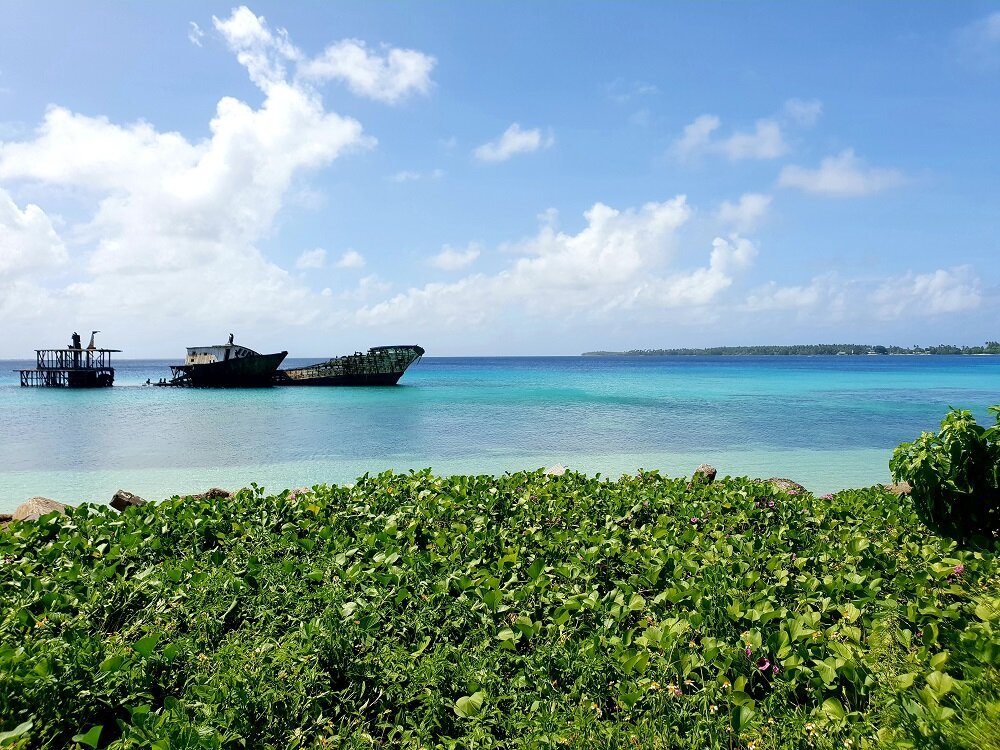 Shipwrecked old fishing boats, in the Majuro lagoon in the Marshall Islands.

Despite these challenges, Majuro is in parts charming. Some of the beaches remain pristine and paradisiacal. The atoll is strikingly colourful. Not only due to the abundance of tropical plants, but also due to the bright and cheery way most of the houses and buildings have been painted. The local people are relaxed and friendly. The degree with which I was told to “take my time” during a sightseeing tour around the island reflected this. 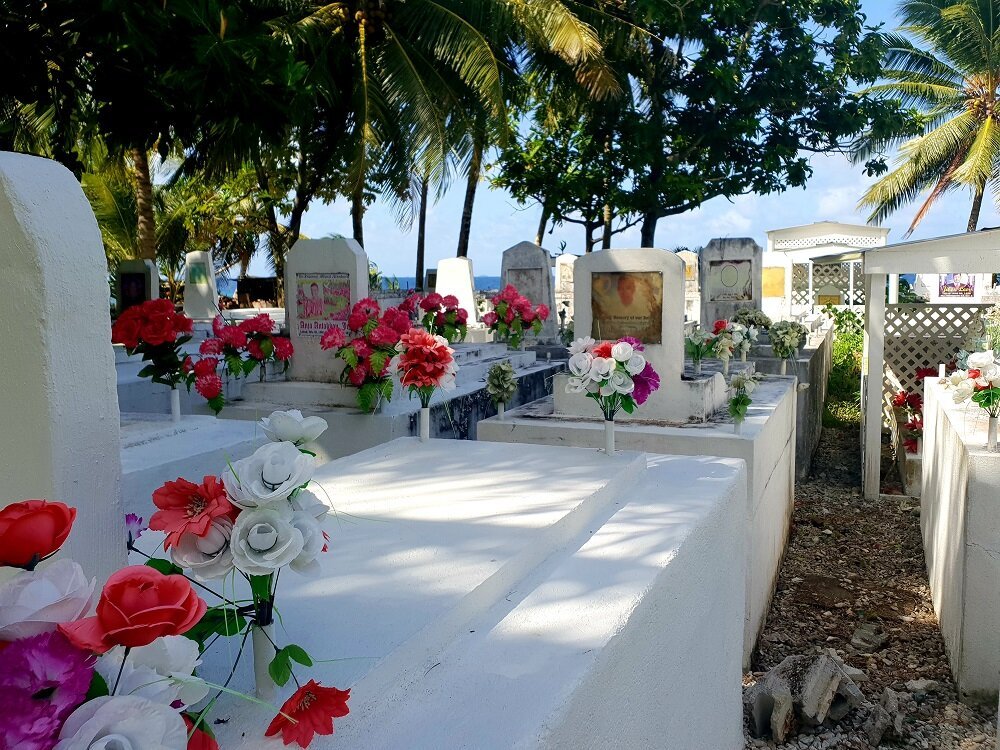 A cemetery in the Marshall Islands.

On my flight out, I watched the tiny circular slither of humanity slide into the distance. I was grateful to have visited. But I also felt lucky to have been born somewhere where the confines of life are not so rigidly contained by a seemingly endless ocean. 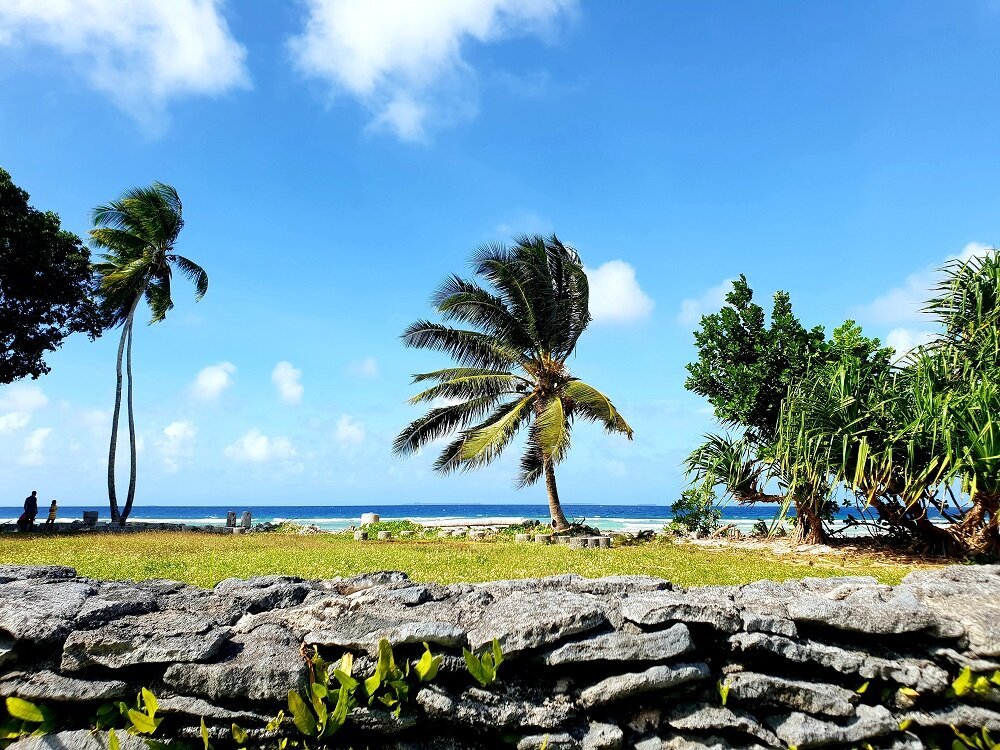 Next Post: Micronesia – Quaint And Serene Islands Bursting With Colour