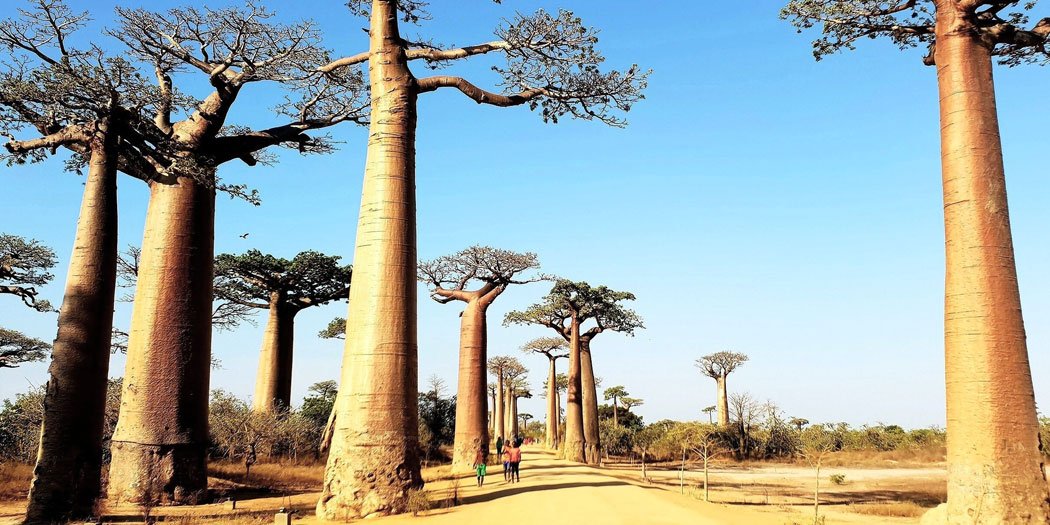 Country #144. There are few places where my preconceptions of a country were so different to the reality as they were in Madagascar. Most of my prior ‘research’ consisted of watching the animated film Madagascar on the flight over, but still. I was expecting lush, verdant rainforests. Talking lemurs. Instead, I was greeted by one of the driest and reddest places I’ve ever visited. Flying into the capital Antananarivo (‘Tana’) was like flying over the Australian outback. And not just because of red earth; because of the sheer scale of the island. 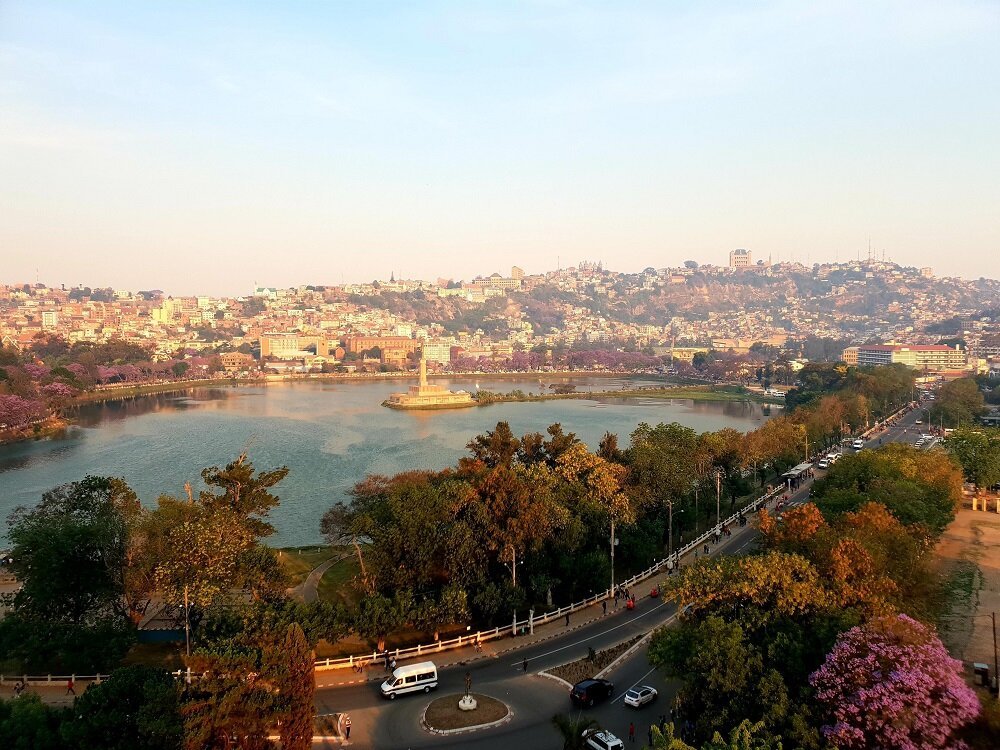 Madagascar is often perceived to be ‘out of the way’ and is perhaps shrouded in mystery as a result. Indeed, I probably knew just as little as you did about Madagascar before visiting (this patently isn’t true, I’m grossly exaggerating my ignorance for comedic effect). Madagascar isn’t a small island tucked away in the Indian Ocean. It’s the fourth largest island on Earth. Its population, of over 25 million, is larger than Australia’s. It covers an area roughly the same size as France. 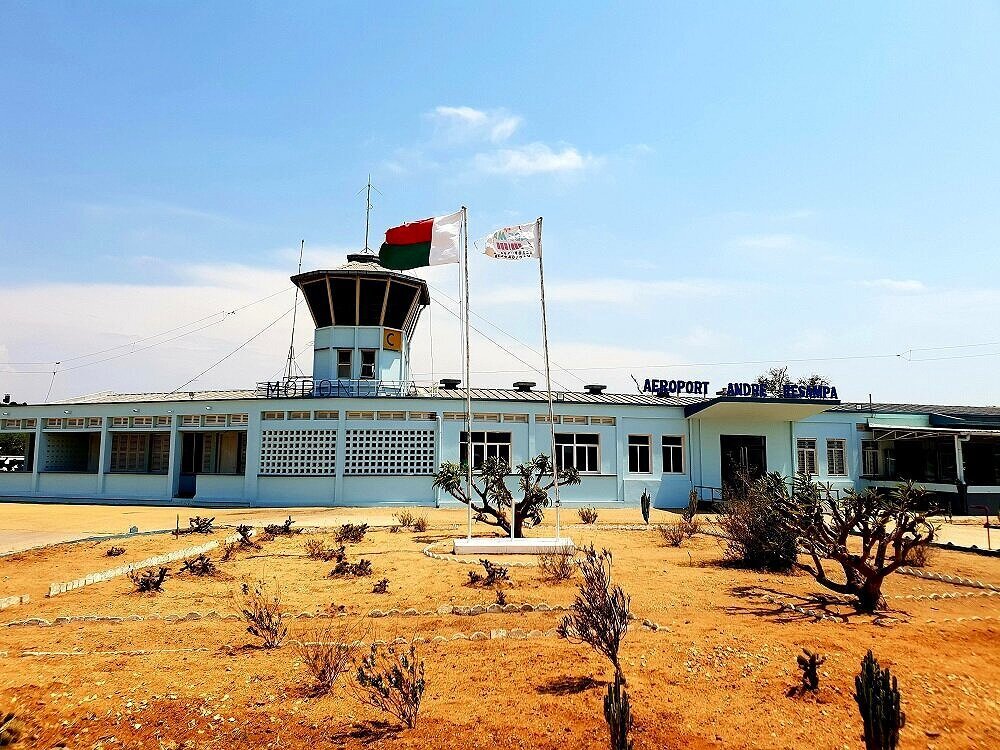 Morondava Airport on the west coast. Not a rainforest, clearly.

On the topic of France, the island remains remarkably French. The ‘frogs’ colonised the island from 1887 to 1958. As a result, Tana is filled with boulangeries and patisseries. Dusty old Citroens and Renaults clog up the busy streets. TVs and radios blare out terrible French pop music. The burnt-out shell of a grand French-built palace (Rova of Antananarivo) sits atop one of the city’s many steep hills. Besides the French influence, the Malagasy people have ancestry traceable to West Africa, India, the Middle East, and Polynesia. Together, the resulting feel of the city is charming and completely unique. I’ve been to no other place like it. 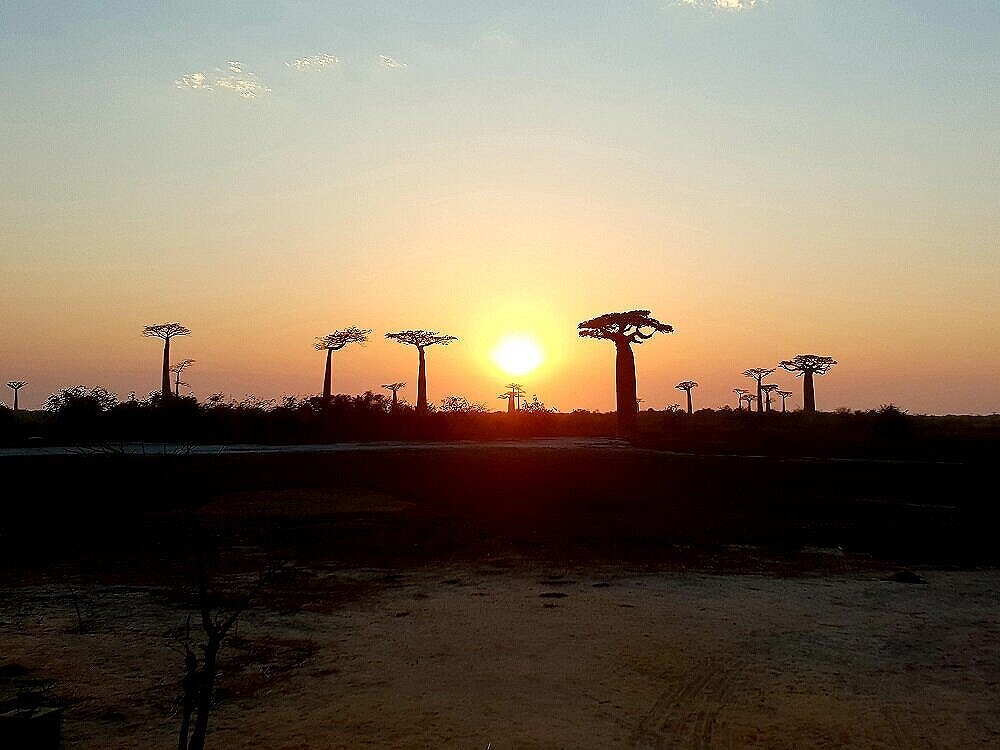 In the previous paragraph, I intentionally included two bigoted slurs against French people, as a test for you, the reader. If you did not find the use of the word ‘frogs’ offensive or jarring, then you’re on shaky ground. If you read this word and the subsequent lazy stereotype that French music is bad and thought “Ha ha, yeah, stupid French,” then you, my friend, are most likely xenophobic. Don’t be that person. 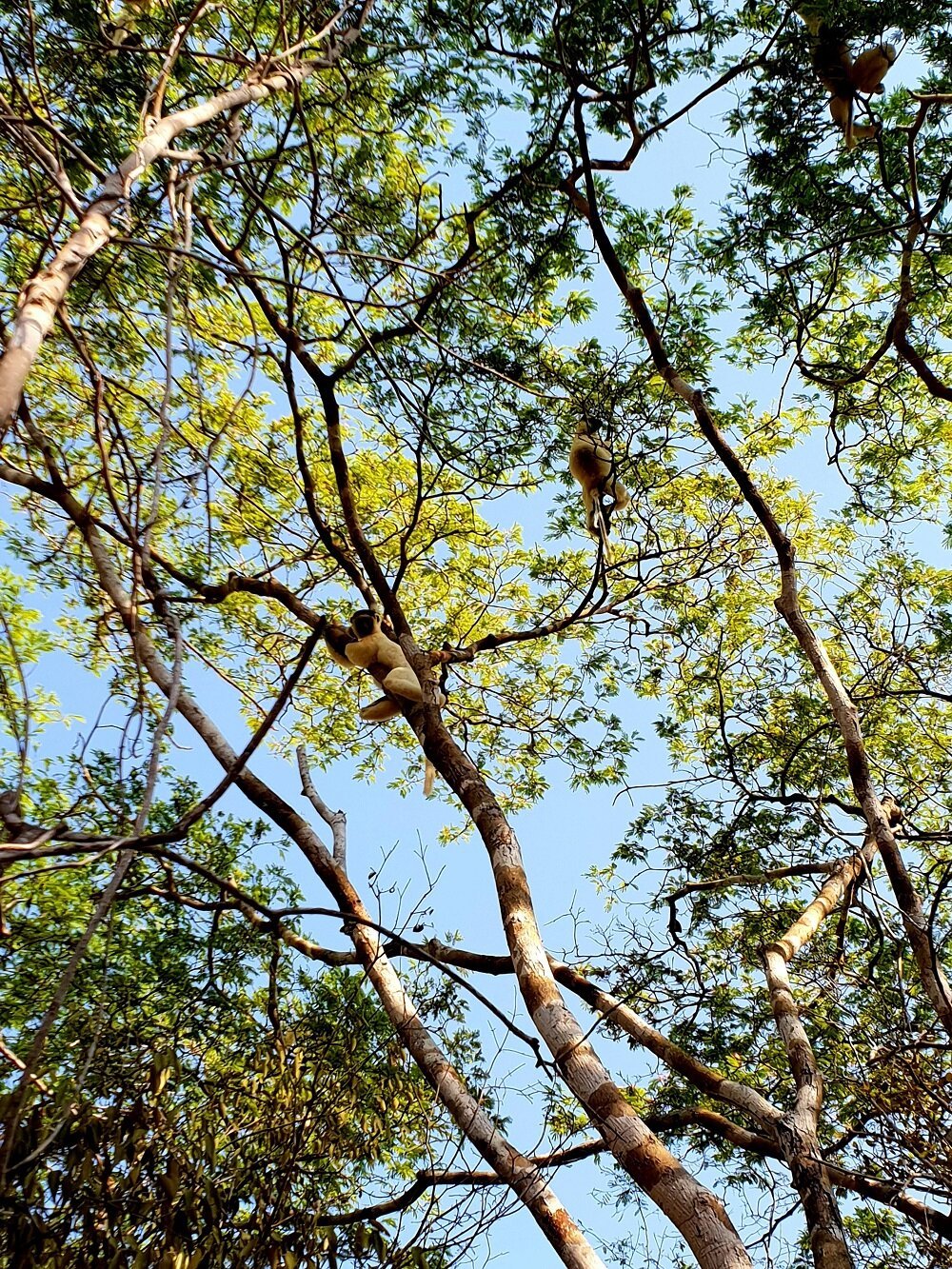 After a couple of days in Antananarivo, I took a short flight to Morondava, on the West Coast. This is the main stopover for trips to the spectacular Tsingy de Bemaraha National Park. Whoever named most places in Madagascar clearly believed that the longer the name, the better the place. The West Coast is where the country starts to become seriously wild. Soon after driving north, paved roads finish. Endless dusty red tracks begin. The iconic Baobab trees, unique to the island and a few other countries in East Africa, start dotting the horizon. As the pictures above show, Baobab trees are the opposite of my body shape: while I have a normal-sized body and gigantic head, the trees are ginormous but have only a tiny canopy at the top. I refused to believe the trees were ‘taunting’ me at any stage during the trip. 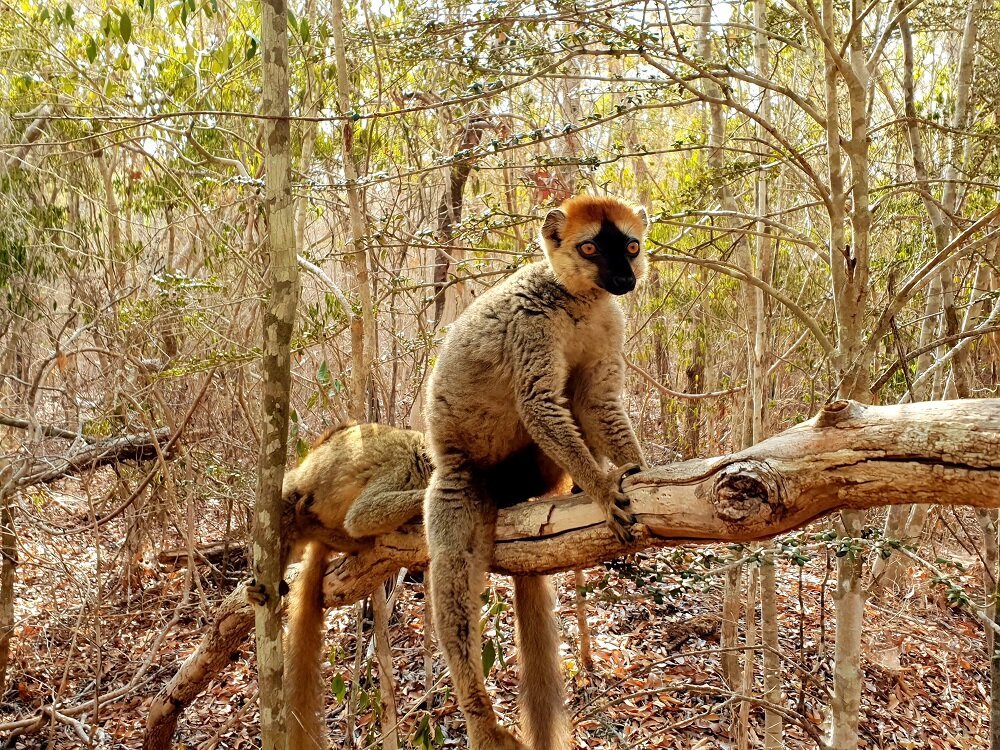 More lemurs. They are cute, but after being shown the thousandth one on your trip, you kind of get it. 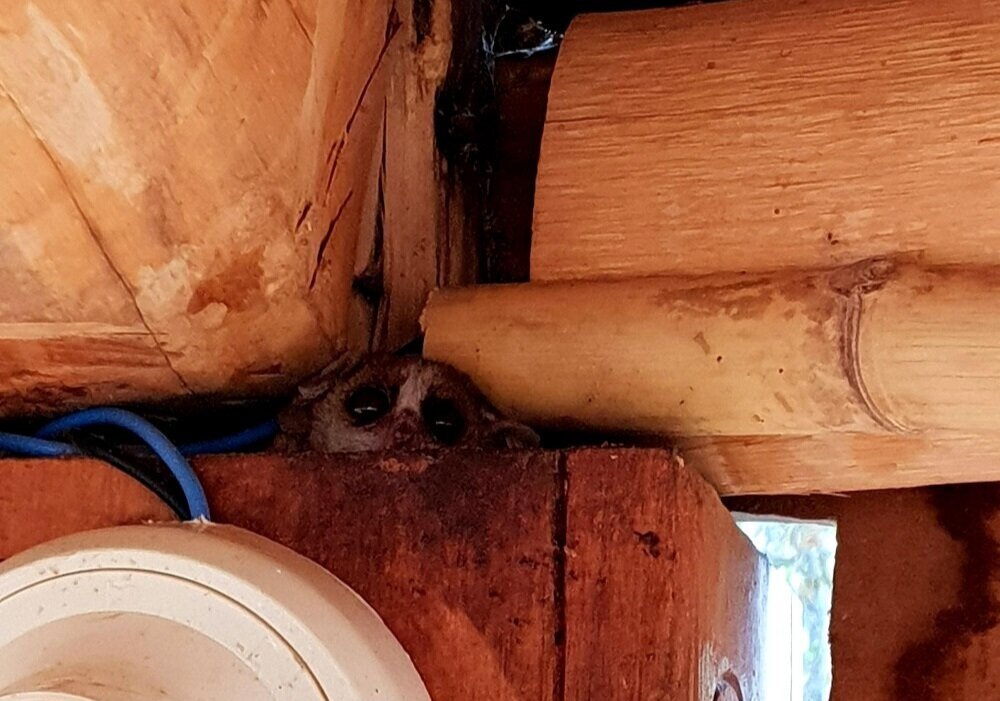 The mouse lemur, however, is without question the cutest animal on the planet. Aside from Golden Retrievers, obviously.

Any visitor will surely get the chance to meet lemurs on their visit. I say ‘meet’, as I had unknowingly started to believe at a subconscious level that the lemurs would talk, having watched hours of ‘King Julien’ (not a king – a fictitious lemur from the Madagascar films) on the way to the island. These animals are extremely cute, although they were pipped at the post by the mouse lemur. Not only are its eyes massive, it’s surely one of the most terrified looking creatures alive. The life of a mouse lemur is thus: spending every waking moment being petrified of death for five stressful years, and then actually dying. Not the best. 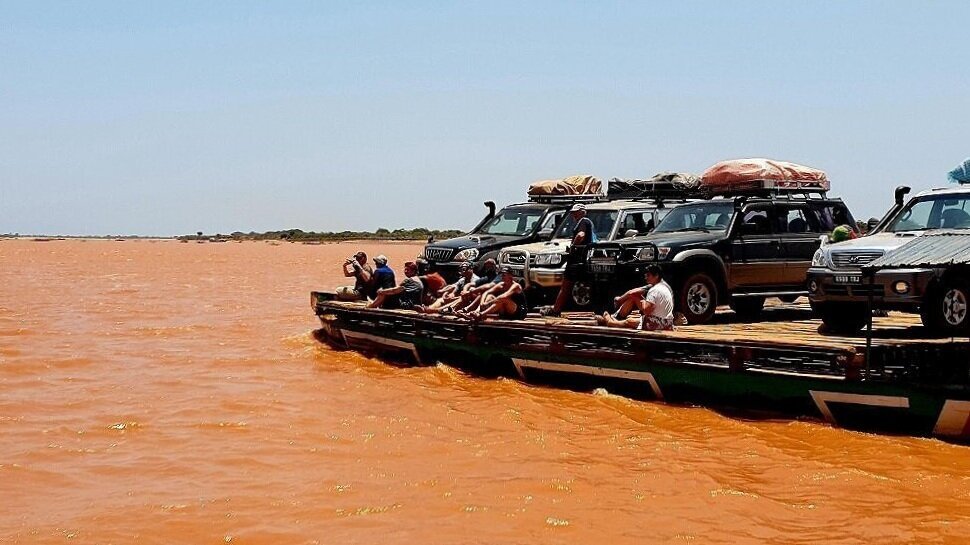 Rivermania! Quite literally, this river is called the River Mania.

The highlight of any trip to Madagascar will be a visit to Tsingy de Bemaraha National Park. Getting there is an adventure. It includes ten hours of driving on muddy dirt tracks, as well as a couple of river crossings on rickety tugboats. Journeying downriver with a 4×4 on a wooden barge was exhilarating. I felt like I was on an episode of the motoring show Top Gear. Although I must add, one of the episodes presented by Matt Le Blanc (‘Joey’ from Friends) and not Jeremy Clarkson (English nationalist known for making lighthearted racial slurs and punching members of his TV crew). As we floated down the brown river, the red banks were filled with local Malagasy people washing their clothes and bathing themselves. It felt a million miles from home. 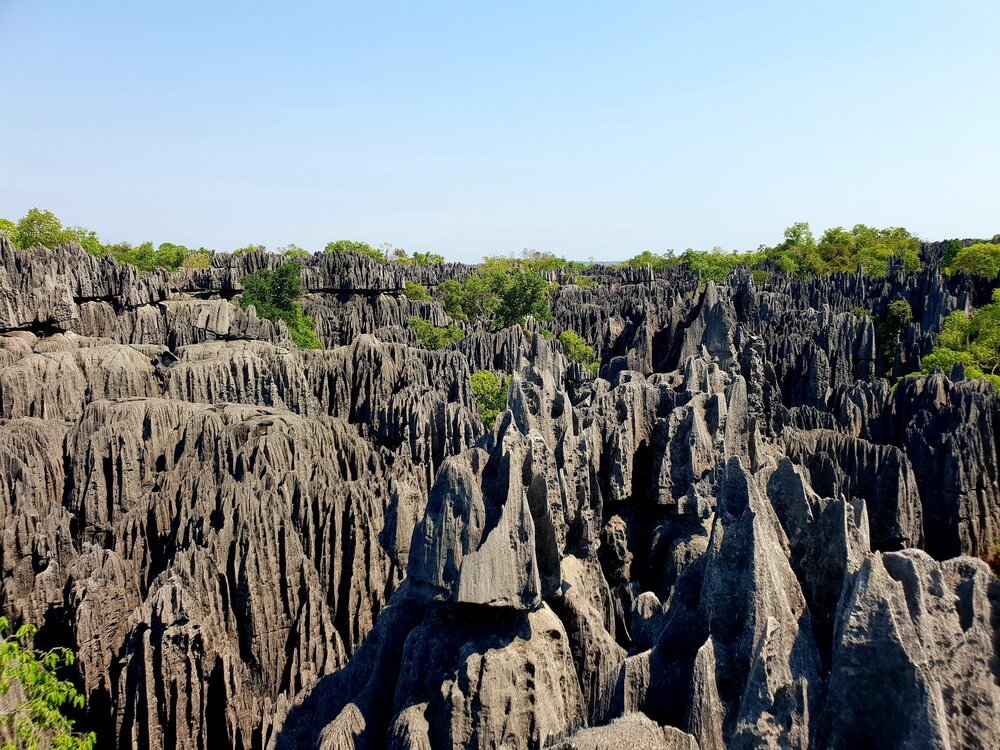 Tsingy de Bemaraha National Park. Without any sense of scale, these could look quite small. They’re around 50 metres high.

Tsingy de Bemaraha National Park is most famous for the aptly named ‘Big Tsingy’ and ‘Small Tsingy’ rock formations. Aptly named by a three-year-old, it seems. The Malagasy translation is at least as charming as it is literal: “Walking on tiptoes on many sharp rocks”. The dramatic limestone cliffs and rock formations have jagged teeth which appear to bite into the deep blue sky. To get to the top, a climb through cliffs, caves, and up steep rock faces awaits.

Which is itself part of the fun. I’m not sure why feeling like you might die is fun, but this seems to be the key ingredient to many ‘fun’ activities. Incredibly, the rock formations used to be on the seabed. They have risen above the ground over millions of years. Although I could literally see the layers of erosion where the seashore had been at various stages, I was kindly reminded later by staff in my hotel that the earth is only 6,000 years old so this couldn’t have been possible. 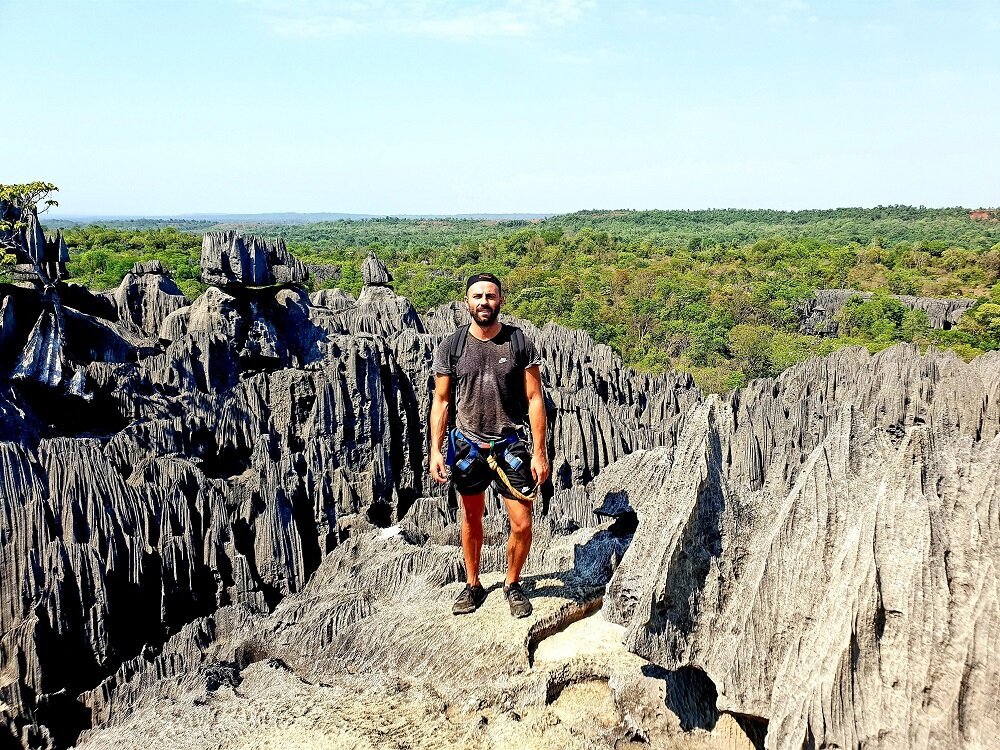 More pictures of Tsingy. As you can see, I’m wearing climbing gear. The implication here is that I bravely scaled vertical cliffs, rather than clipping myself onto guide ropes on some steep(ish) ladders and stairs.

Challenges Ahead For This Enchanting Island

I was taken aback by the poverty I saw in Madagascar. Again, I partially credit this to the many inaccuracies presented to me in the film Madagascar, which implied no humans lived on the island at all. Outside cities, very few people have electricity. Houses are constructed from branches, sticks, and mud. This is not ideal for a country prone to hurricanes. In each village we visited, the number of children outnumbered adults by a factor of two or three. By around the age of two, kids are generally left to roam free and do as they please (mainly fight each other and ask passing cars for “bonbons”). 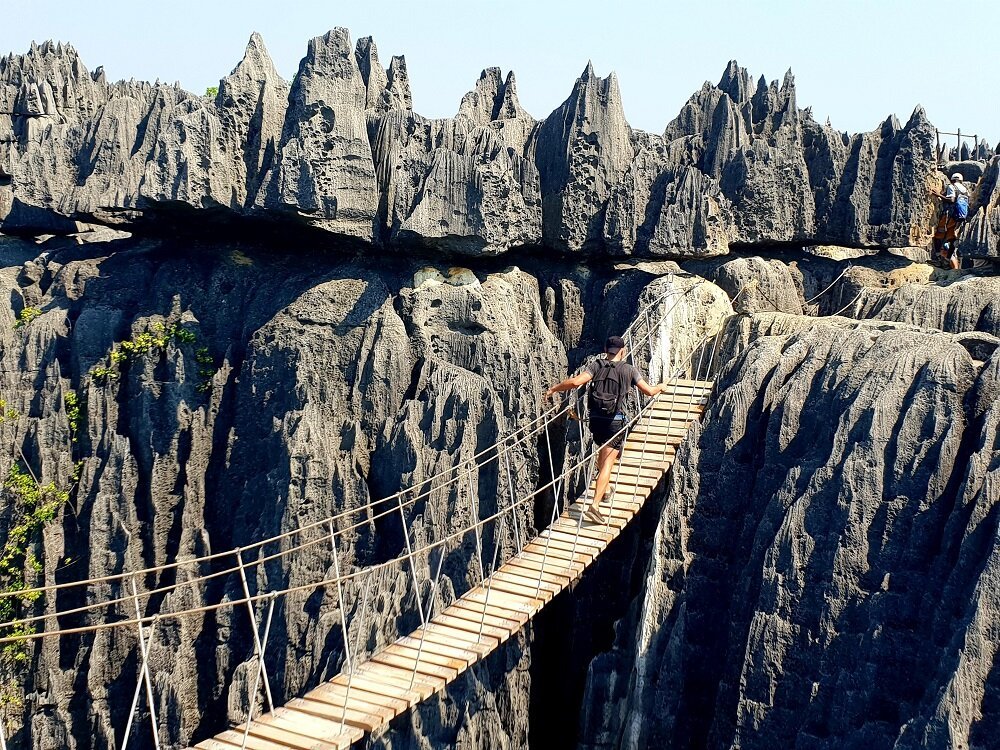 More pics of Tsingy De Bemaraha National Park. Aside from being awestruck at the rock formations, you’ll rightly be wondering whether it’s acceptable for a man in his 30s to wear a backwards cap.

While economic development is by no means a measure of human happiness, I had not witnessed this level of poverty on any of my trips to mainland Africa. We gave a pregnant lady a lift to the nearest local town as she was ill. It was a four-hour drive away. The ‘town’ consisted of around 50 rickety structures and certainly didn’t appear to have a hospital. In the rainy season, she told us, cars can’t drive on the muddy paths. So, if you get ill, a visit to any doctor might be six months away. 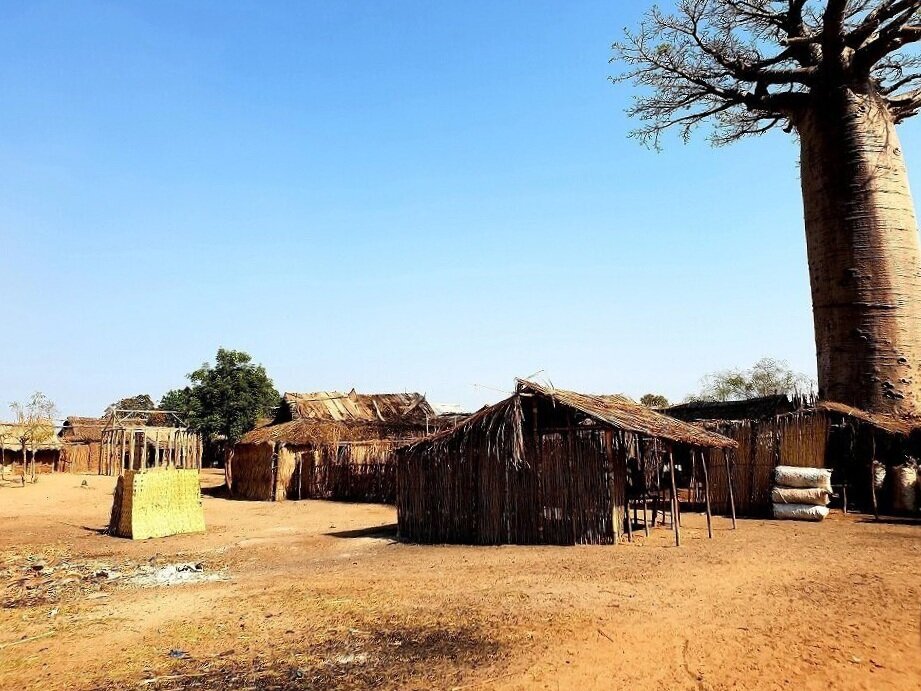 Typical village in Madagascar, with a Baobab looming above.

Children waved, smiled, and chased our car whenever we went through each village. Despite challenges, they all seemed happy. They were desperate for anything we could give them. Passing a child an empty plastic bottle would result in a mass brawl between the kids to claim the prize. While our guide did not go into details, it was slightly unnerving that we were required by law to have an armed guard with us on our trip up to the national park. While infrequent, bandits have previously held up tourist cars on the route.

On the positive side, the country appears to be moving in the right direction. For starters, the country’s president, Andry Rajoelina, was re-elected in 2019. Before becoming president, he was a famous Malagasy DJ. There are precedents for this. US president Ronald Reagan was an actor before taking office. George Weah, Liberia’s current president, played football for AC Milan and was World Player of the Year in 1995. Judging by recent events in Liberia, however, kicking a sphere filled with air between two poles and a net does not necessarily prepare or qualify you for public office. 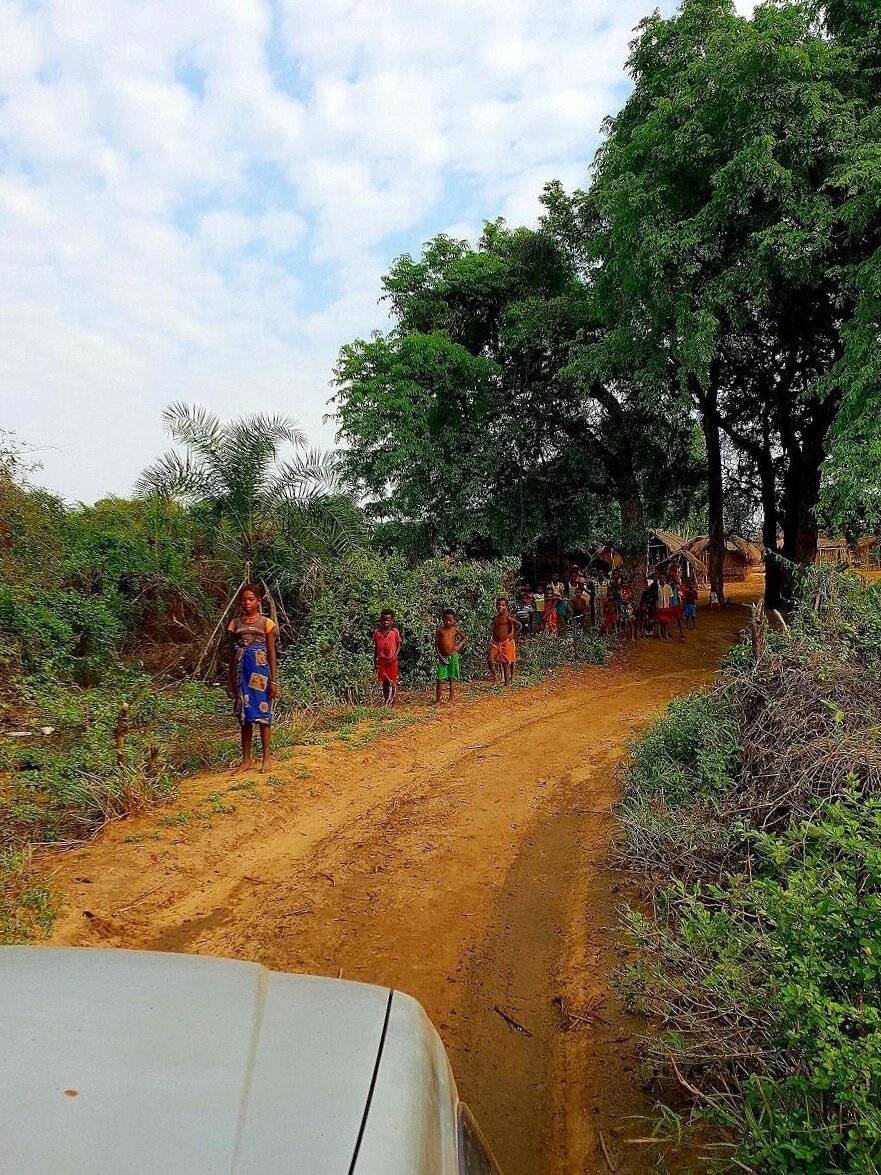 Driving through a village on the west coast of Madagascar.

The Malagasy government has recognised the potential for tourism to boost its faltering economy, and basic education is now slowly spreading to even the most remote rural areas. Given how lovely everyone was on this island, I’m hoping things improve steadily in the coming years. However, given the country’s lack of natural resources, isolated location, and low base level of economic development, I sadly think the road ahead may be a rocky one.