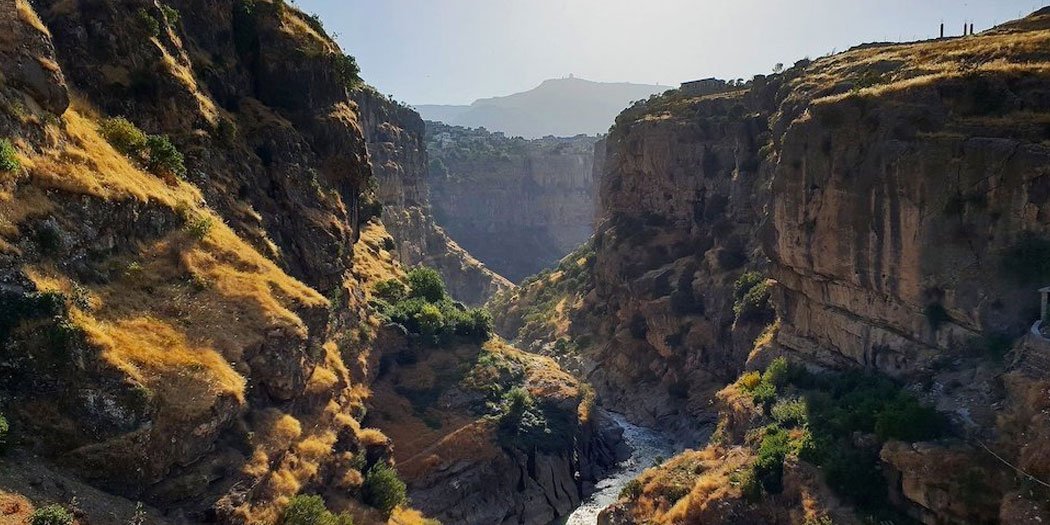 Iraq – Kurdistan An Oasis Of Calm Amidst Regional Turmoil

Country #140. Iraqi Kurdistan is such a fascinating region that it’s hard to know where to start this article. Of all the times to have visited, I inadvertently picked the most significant in its recent history. We drove for several hours along the Syrian-Turkish border, which days later became the scene of a Turkish military incursion into Kurdish-controlled Northern Syria. This happened on October 9th, after US president Donald Trump withdrew his support for the Kurds based in Syria, who were US allies in the fight against ISIS. At the same time, Iraq was facing unprecedented anti-government protests. Over 100 protesters were killed in the first week of October alone. 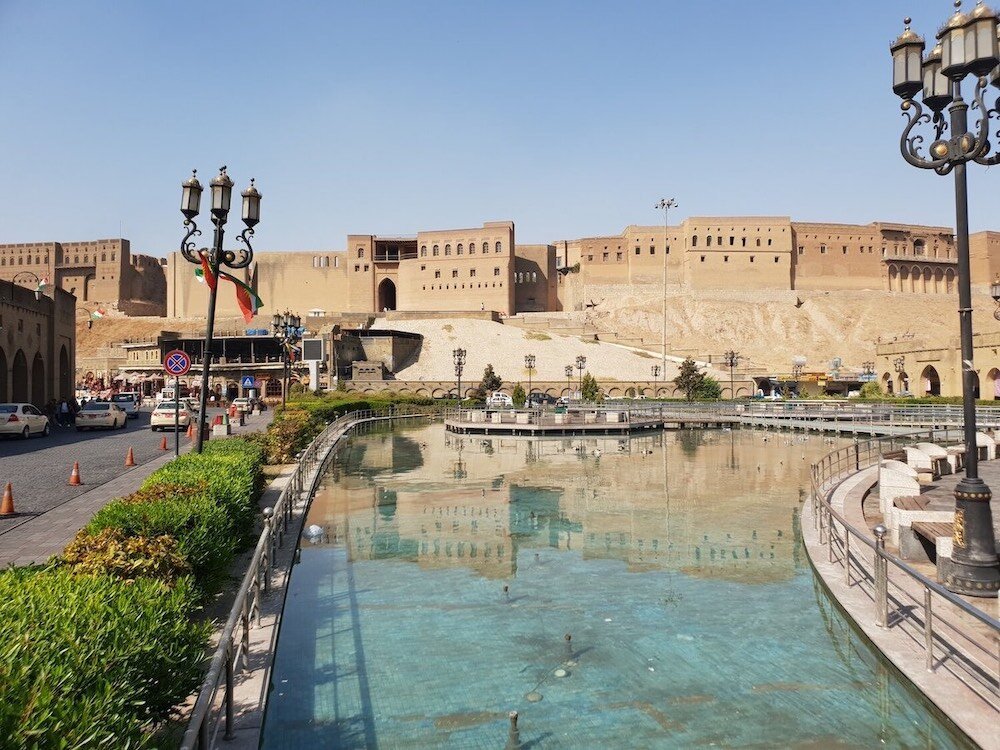 The citadel in Erbil, alleged to be one of the oldest in the world.

Needless to say, the decision to optionally plonk myself in the middle of this political maelstrom at times seemed unwise. When I watched the unfolding events, my thoughts started going into overdrive. “Hold on. I’m from the West, this is not allowed to happen while I’m here on holiday. I should be exempt from any unrest were I to be caught up in it”. My fears highlighted my – and perhaps a collective – ignorance of what the world outside the West can be like. A huge chunk of the world’s population lives in places where military, environmental, or developmental insecurity are the realities of daily life. My aversion to spending a few days in such a situation only shows how spoilt I have been. 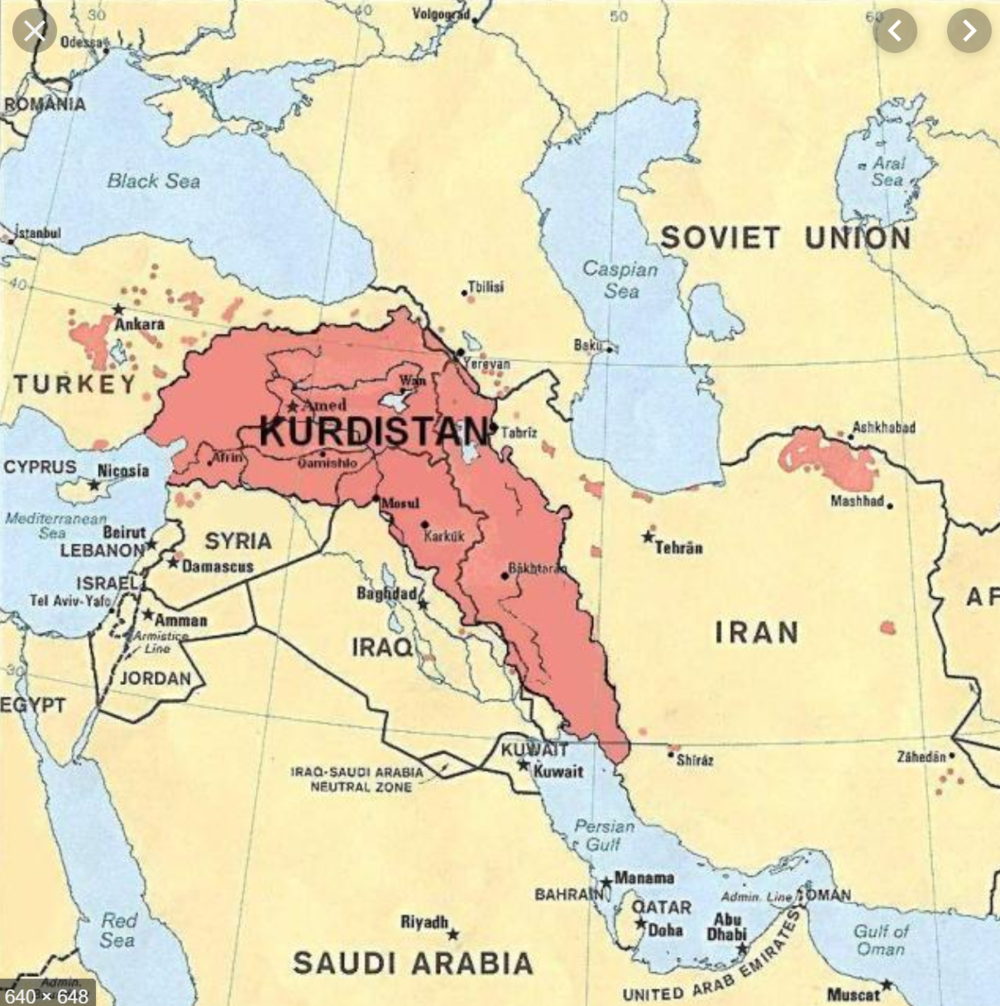 A map of ‘Greater Kurdistan’.

I will try to roughly outline what Iraqi Kurdistan actually is, as concisely as possible. I didn’t know as much as I would have liked before visiting. ‘Greater Kurdistan’ is a region split between four countries. It straddles Syria, Iran, Iraq, and Turkey. Together, it has a population of between 30-40 million. While never a formal state, the grouping has an identity which has persisted throughout rule by the Roman, Safavid, and Ottoman empires. The creation of a ‘Greater Kurdistan’ state is extremely unlikely. This means that Iraqi Kurdistan – a semi-autonomous region of Iraq – will remain the most formal representation of the ethnic grouping on the international stage for the foreseeable future. 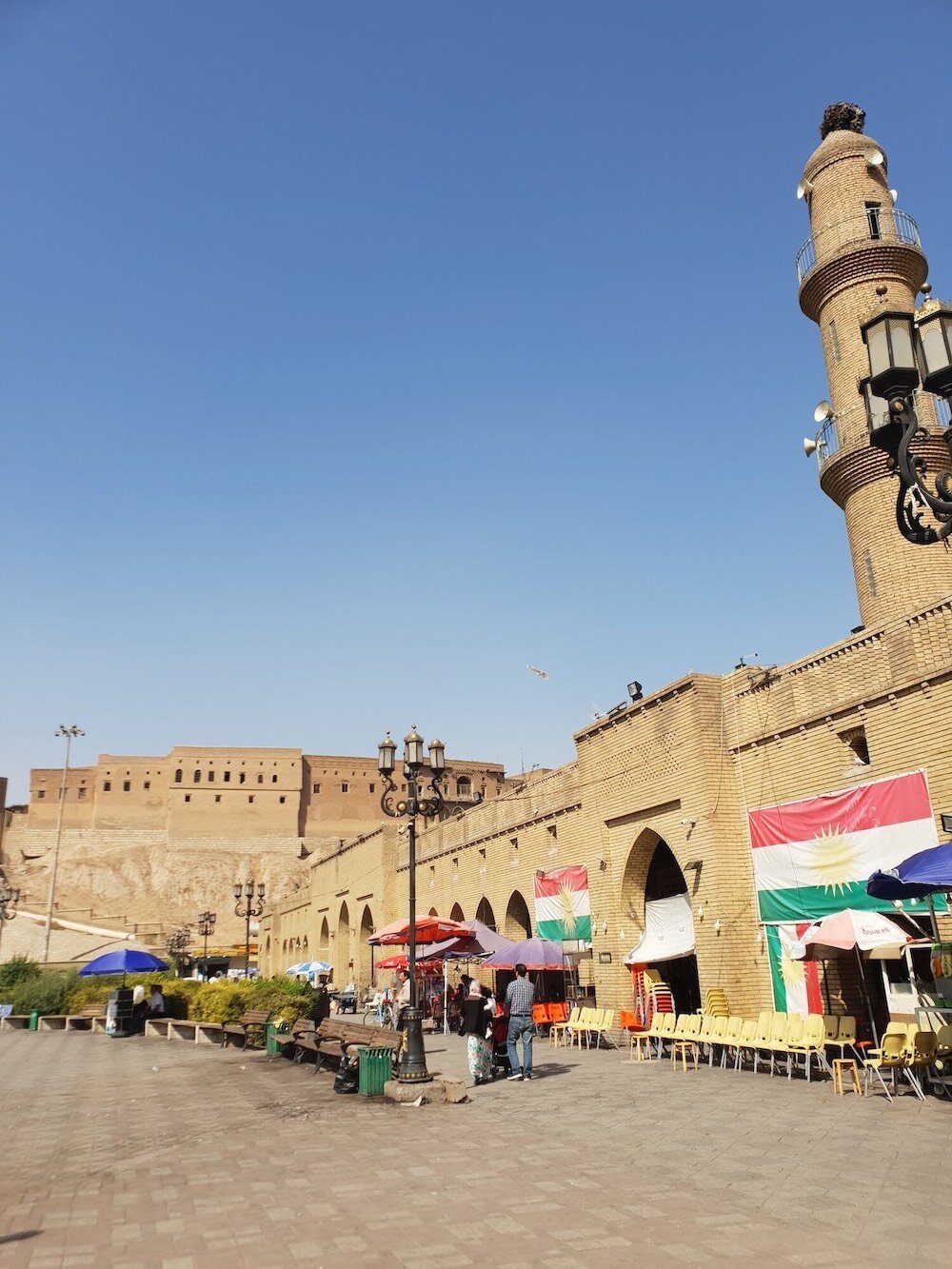 The bazaar in Erbil. The Kurdistan flag flies all over the region.

While I would love to say that my trip to Iraq was a heroic journey into a volatile war zone, this would be untrue. There are borders separating Iraqi Kurdistan from the rest of Iraq. I sent pictures of a Google Maps location to friends, when I was around 30km away from Mosul. I didn’t mention the border, in a deceptive attempt to impress them with my bravery. 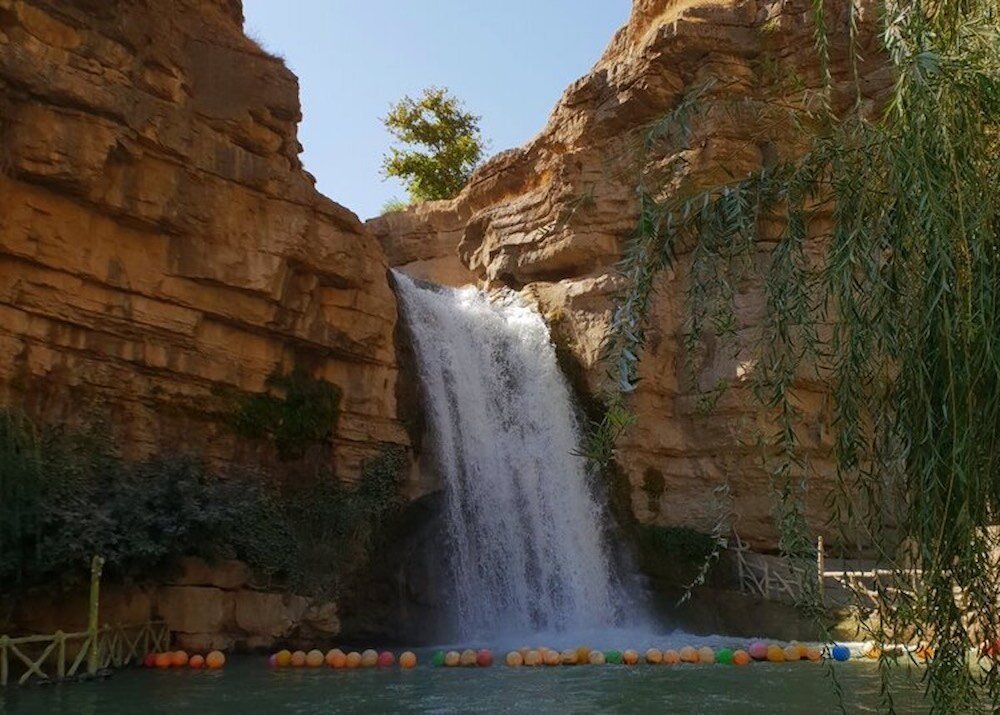 Despite its small size, this waterfall is so famous in Iraqi Kurdistan that its picture adorns bank notes. Probably best to go elsewhere if you want to see world-famous landmarks.

You barely see the Iraqi flag flown anywhere in Kurdistan. Over 94% of the population voted in favour of independence in a non-binding 2017 referendum. To all intents and purposes, Iraqi Kurdistan is very much its own country. And it is one that confounded my lazy, stereotyped preconceptions of what it would be like. 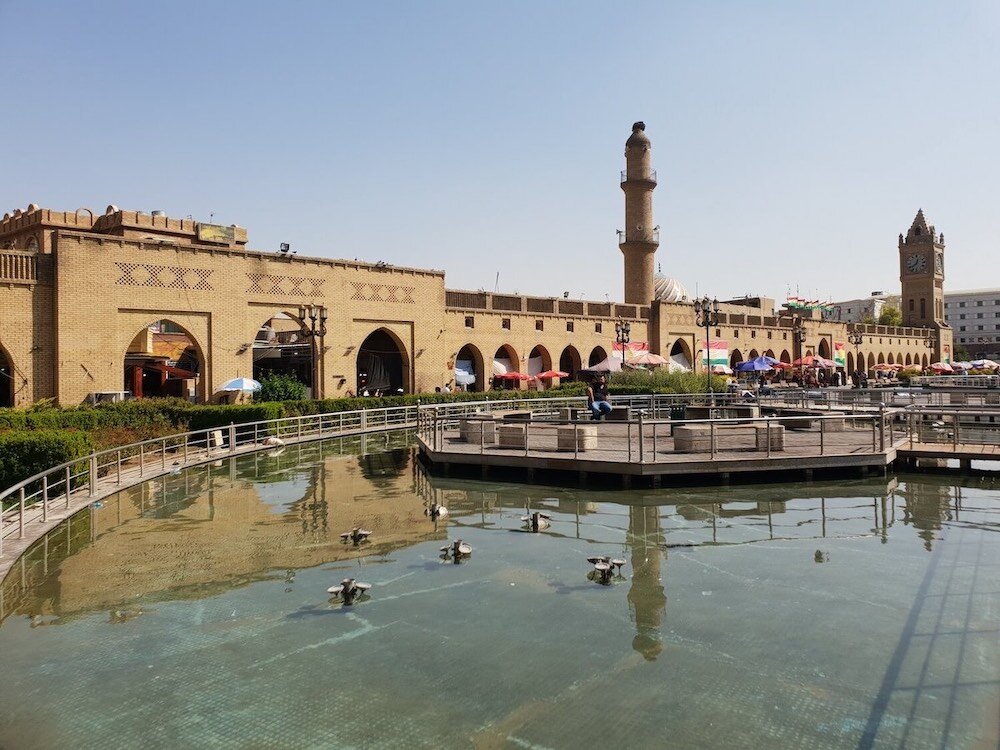 While Erbil’s centre is ancient, skyscrapers and flashy cars dot the rest of the oil-rich city.

A Beacon Of Relative Stability

Arriving in Erbil, the de facto capital of Iraqi Kurdistan, I was naively expecting a drab, underdeveloped, and war-ravaged city. I was greeted instead by flashy cars, Dubai-esque skyscrapers, and throngs of shopping malls selling luxury goods. Benefiting from oil revenues and the fact that it was not impacted by the Iraq War (2003-11), Erbil has comfortably become the wealthiest city in Iraq. Streets were packed with casually dressed locals. They watched English football, smoked shisha, and in certain places, were drinking alcohol. 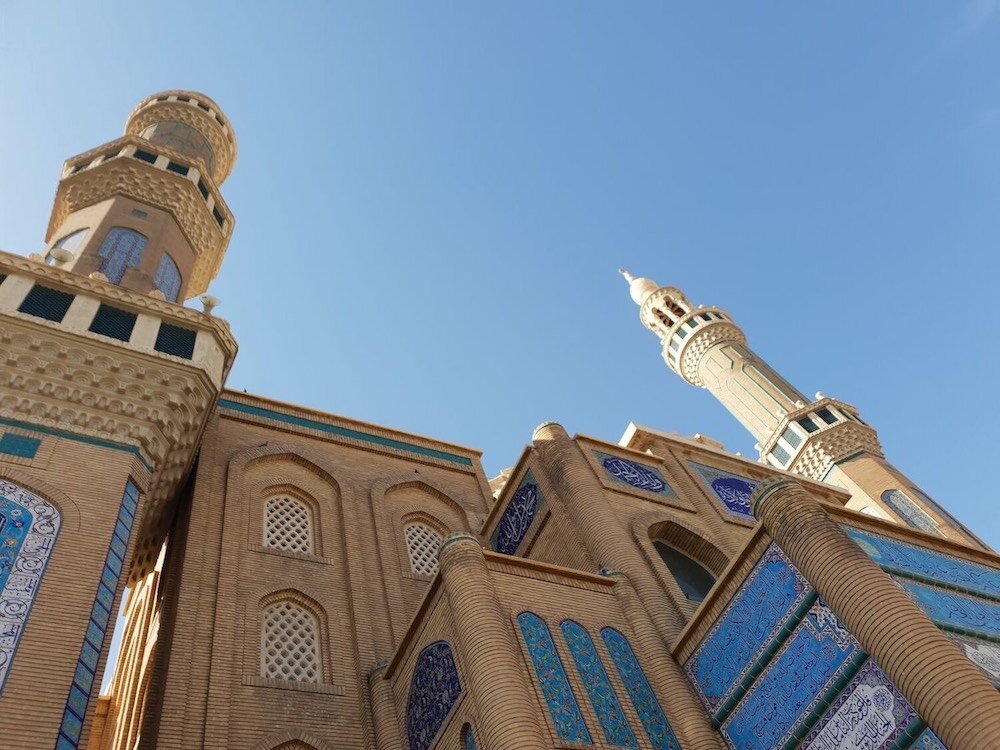 Jalil Khiat Mosque, Erbil. Despite appearances, it was only completed in 2007.

It felt as though I was visiting somewhere like Turkey, Serbia, or Bulgaria, which are generally perceived to be at a more advanced stage of economic development. In my tour group, we often joked that we kept forgetting we were technically in Iraq. The people were warm and welcoming and the region was well run. To be honest, it felt so calm, that after a few days I felt totally disconnected from the uncertainty prevailing nearby. 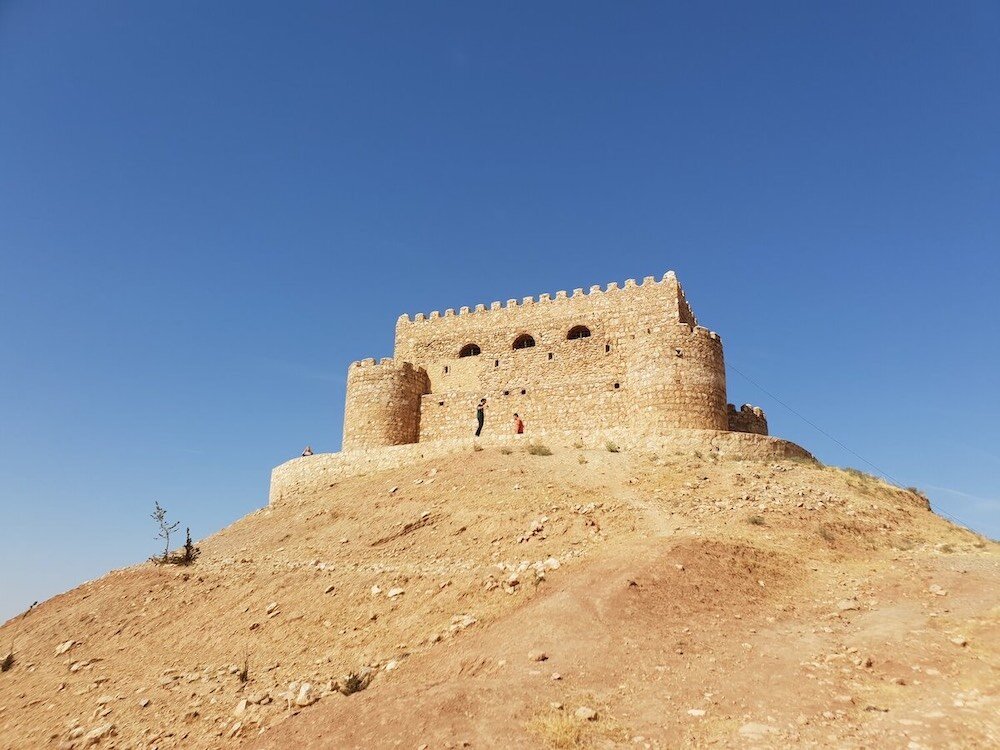 A perfectly formed castle. That said, if I had made the effort to build these extensive fortifications, I probably would have made the actual part to live in a little bigger.

Who Goes On Holiday To Iraq?

I travelled to Iraq with Lupine Travel, a fantastic travel company specialising in arranging trips to left-field destinations that most people would probably choose to avoid. A slight downside, at least on a personal level, was the type of person a tour like this attracts. They are harder to impress. Upon meeting the group, the conversation quickly moved on to everyone’s travel adventures. I sat back and relaxed, waiting to pull my ‘North Korea’ trump card. As I usually do, I reeled off a few destinations I had been to in recent years, dropping North Korea into the mix as nonchalantly as humanly possible. 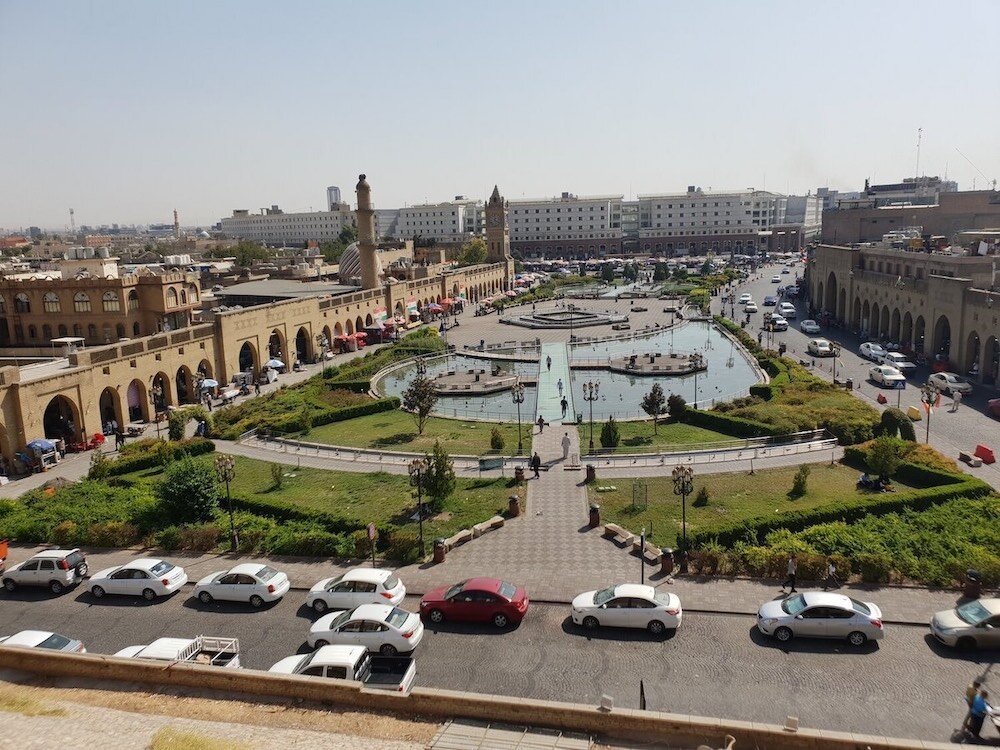 I waited for the inevitable dropped jaws, barrage of questions, and a nice dopamine hit from being the centre of attention. I got nothing in response. Of the 14 people on my tour, ten had also been to North Korea. Mostly with Lupine, as I had. I had to up the ante. I revealed my attempt to visit as many of the world’s countries as possible, certain that this would do the trick. “This is country number 140,” I said, as mundanely as I could. Checkmate. 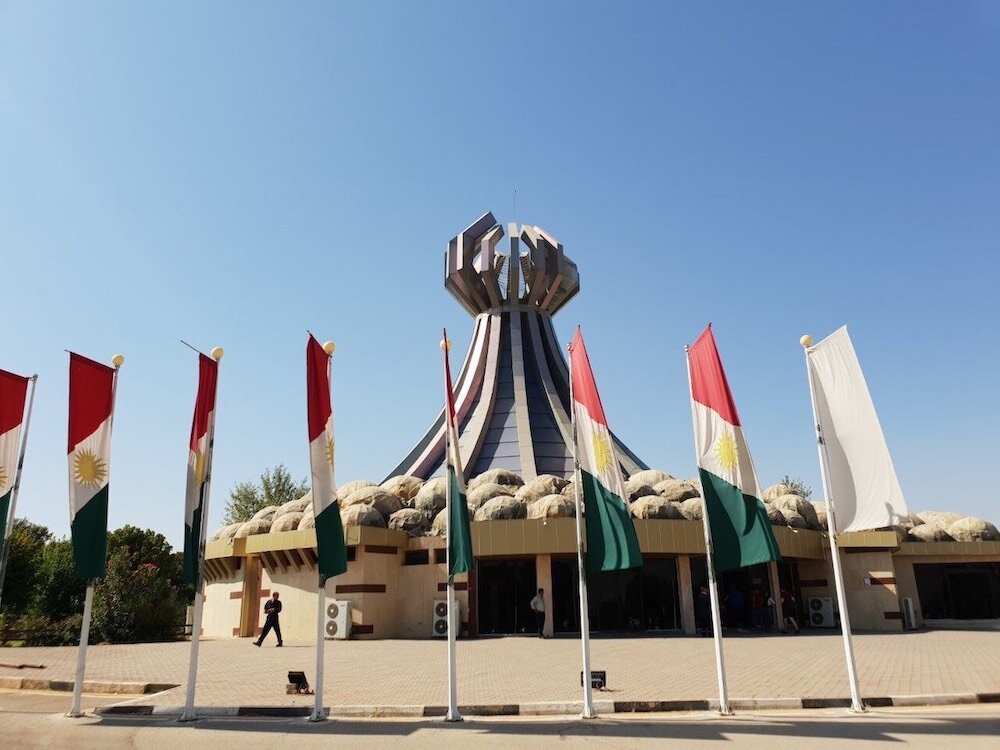 The poignant Halabja museum. Our museum guide survived the bombing, but was in hospital for three months and was lucky to retain his eyesight.

Or so it seemed. “Oh that’s nice, I’ve been to 190,” said an 80-year-old Spanish man. “I’m on 160,” an American lady interjected. Most of the group had been to at least 100 countries. While they were older than me, it still sucked the wind out of my sails. I dreamed of my next destination, Bali, where I surely would be able to top other people’s travel stories once again. On the positive side, it meant I had some seriously interesting people to spend time with. From being arrested in Angola to visiting Baghdad during the 2003 war, anecdotes from the Lupine group were certainly never boring. Does this mean that I am also by extension interesting? Well, I’ll leave that question up to you (having implied that this is almost certainly the case for the last three paragraphs). 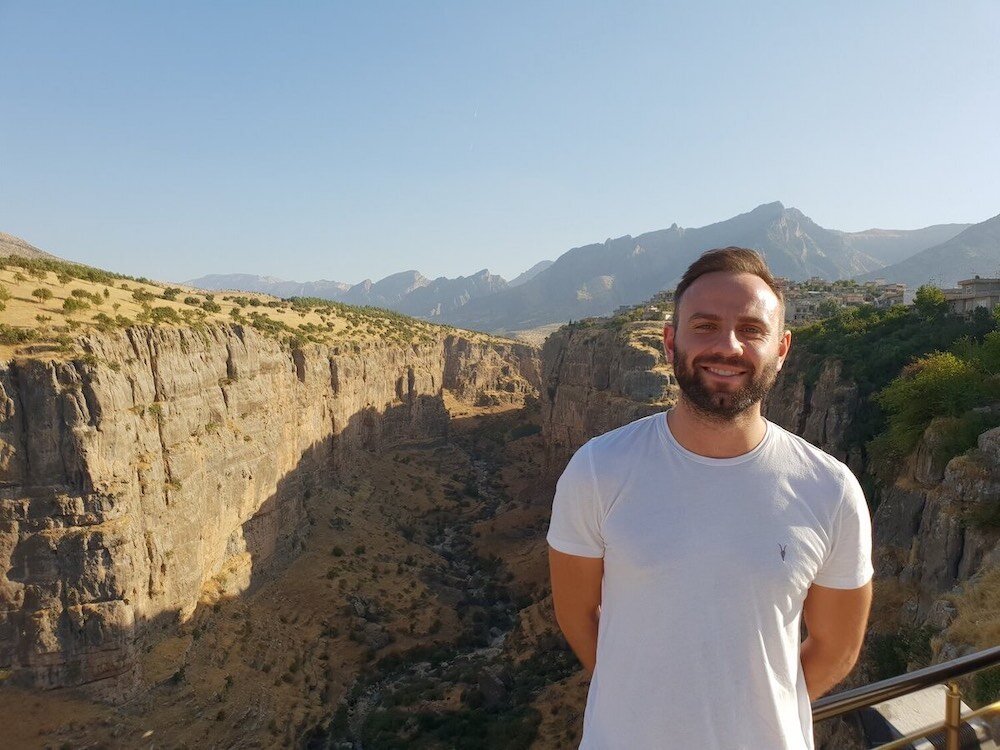 Beautiful Rawanduz canyon, with half of the view obscured by someone desperate to have photographic evidence that he did actually go to Iraq.

Smiling Faces Wherever You Go

We spent several days in Erbil. The most notable landmark is its impressive citadel, which is said to be the oldest inhabited in the world. The bazaar in the centre of town is also teeming with tea spots and places to eat. Despite a population of over one million people, it’s a serene place. Car horns are notably absent. Taking your time for leisure seems to be the order of the day. Everyone we met was extremely pleased to see tourists, asking for photos or offering us free meals. This friendliness persisted as we headed out east, to Rawanduz. The mountainous region near the Iranian border is stunning. There was the added bonus of a weird, quasi-abandoned theme park. It has a self-driving rollercoaster that I’m fairly sure would not pass even the most basic health and safety checks back home in Europe. 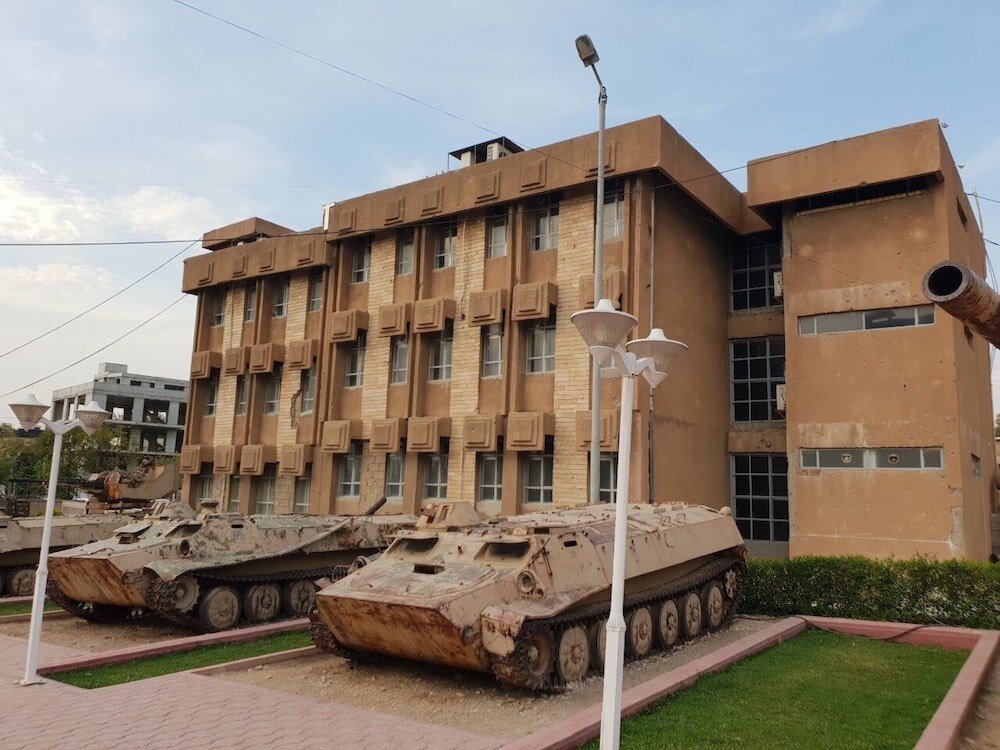 The ‘Red Museum’ in Sulaymaniyah, where Kurds were held in appalling conditions by Saddam Hussein’s regime.

From Rawanduz, we passed the beautiful Dokan Lake before heading to the second largest city in the region, Sulaymaniyah. Again, brand new infrastructure is on show all over the place and skyscrapers pepper the horizon. This part of Iraqi Kurdistan also gives you a closer look at its troubled recent past. The ‘Red Museum’ shows you the horrors of the treatment of the Kurds by Saddam Hussein’s regime. Nearby Halabja is even more chastening. A museum honours the estimated 5,000 people who were killed and 10,000 injured when the town was the victim of a chemical weapon attack by Saddam Hussein’s government on March 16th 1988. A chastening reminder of its troubled history, just as regional tensions flare up once again. 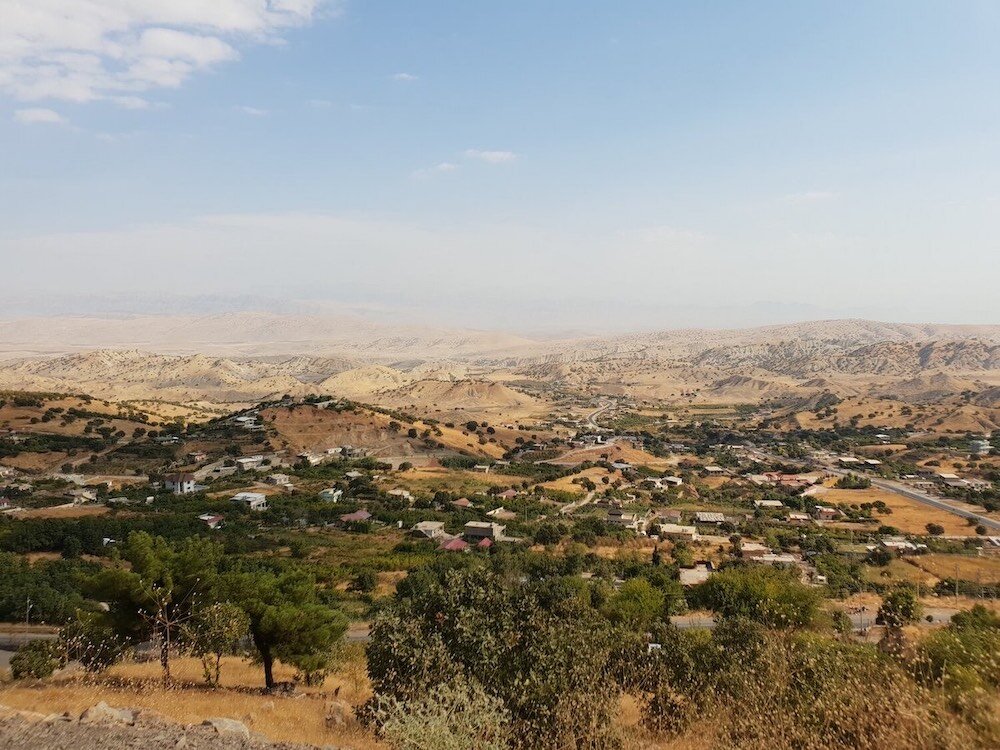 A distant view looking across a populated area with a desert in the background.

What Next For Iraqi Kurdistan?

Iraqi Kurdistan occupies a unique geopolitical position in the region. For a variety of different reasons, but most notably western political backing, it is likely to remain a beacon of relative stability. While full independence is unlikely, its autonomy is all but guaranteed to persist for many years. The biggest challenge, perhaps, will be navigating the current rise in ‘strongman’ and ‘nationalist’ politics globally. 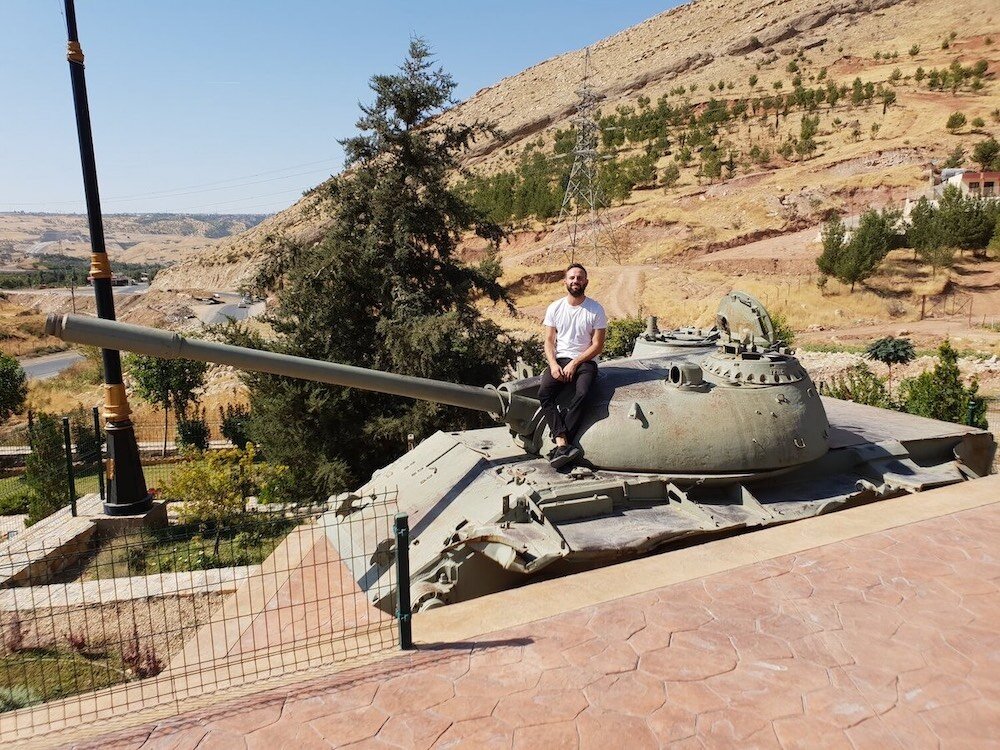 I was hesitant to smile in this photo. It doesn’t really seem appropriate when you’re sat on something which has most probably been responsible for the loss of human life. But pulling an appropriate face without smiling is quite hard… hence the constipated facial expression.

In this respect, Trump’s decision to abandon support for the Kurds in Syria is quite shocking. Most people I spoke to expressed deep sadness for the plight of the Kurds in Syria, and confusion as to why the US had betrayed them. The danger now is that distrust for the US rises in Iraqi Kurdistan. A tilt towards other powers, most notably Russia, is possible. Indeed, we saw a delegation of 40 SUVs ferrying the Russian Foreign Minister, Sergei Lavrov, drive past when we were in Erbil. One only hopes that Iraqi Kurdistan can maintain its existing patchwork of geopolitical alliances, without succumbing to the fate of its Syrian neighbour. 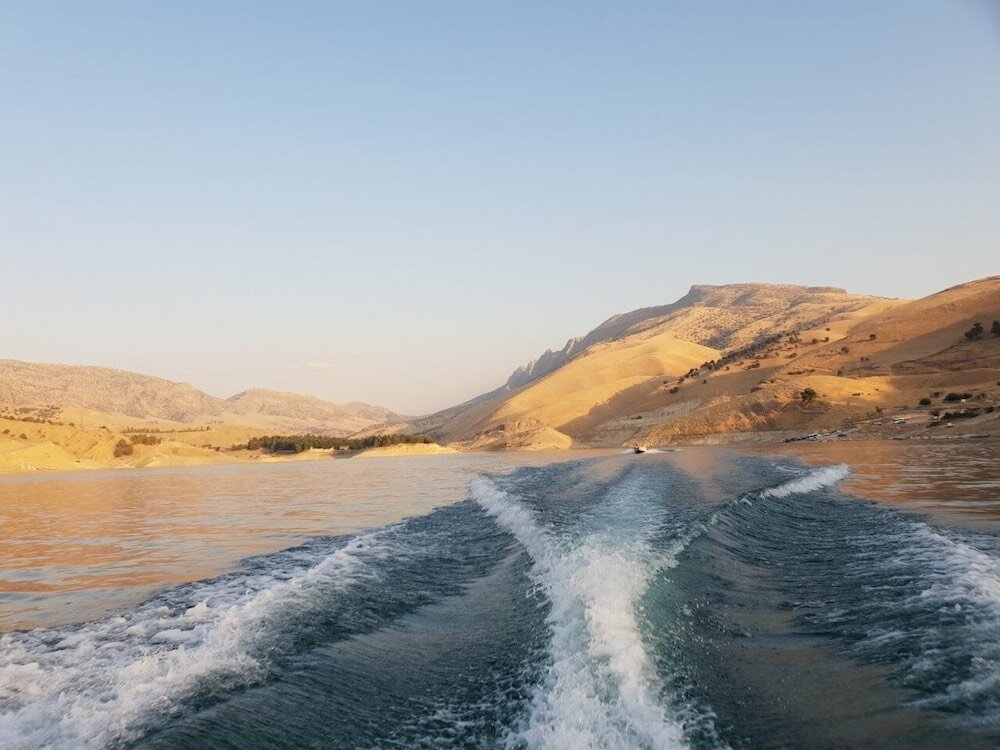 Next Post: Madagascar – Dusty And Dramatic, A Truly Wild Island