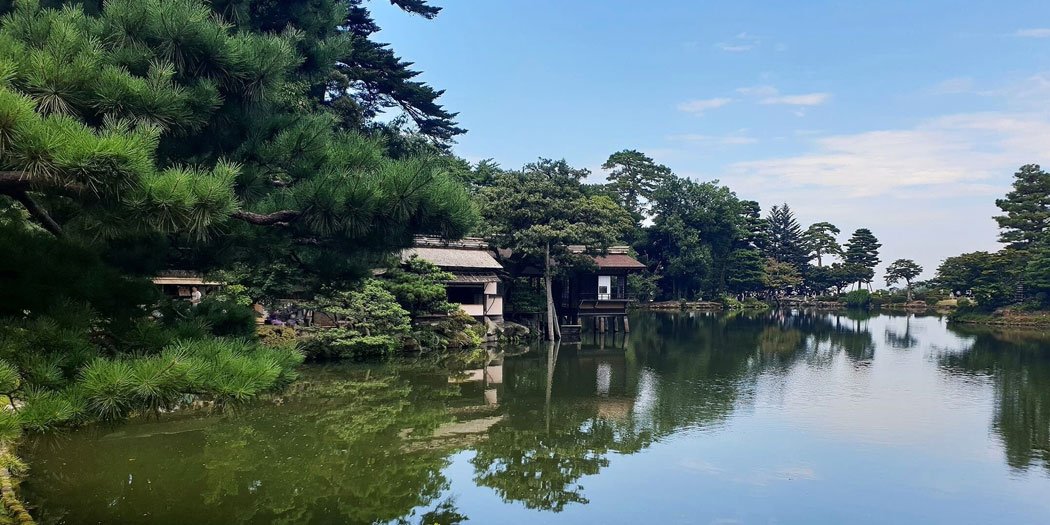 What Are The Five Best Countries To Travel To In The World?

I‘ve had a lot of time to reflect on my travels in recent months. More than I would have hoped. One of the few positives of the coronavirus outbreak – and there are not many – has been the ability to reflect on how much of the world I’ve been fortunate enough to see. I’ve visited around 80% of the world’s countries. And while I don’t want to be unfair to the remaining 20%, even a cursory glance at the map of where I have been will show you that ‘the best’ country to travel to is unlikely to lie ahead of me. Unless Chad is much nicer than we’re all led to expect.

Obviously, declaring that anywhere is ‘the best’ is highly subjective. Which is probably why almost everyone on Earth holds the convenient belief that the country they were born in just so happens to be the greatest one in the world. This article isn’t trying to ascertain which society is the best in the world – this question was settled once and for all (objectively) by one of my earlier posts – rather, it looks at which countries offer the potential backpacker the greatest sense of awe and inspiration. The use of the world ‘potential’ in the previous sentence is a depressing indictment of the state of global travel right now. ‘Would-be’ is only marginally better. On the assumption that one day travel will be a thing again, I’ve ranked my top five travel destinations, with links provided to more exhaustive posts on each country.

My love for this country knows no bounds (within reason, it’s hard to truly love the abstract concept of a nation). There’s something magical and mystical about Japan. On paper, it should not work. 125 million people squeezed onto a small, earthquake-prone archipelago, mainly made up of mountains. Rapid economic development post-WWII means most of the cities look like they come from a dystopian sci-fi film, with concrete and neon lights filtering out onto the horizon in all directions. 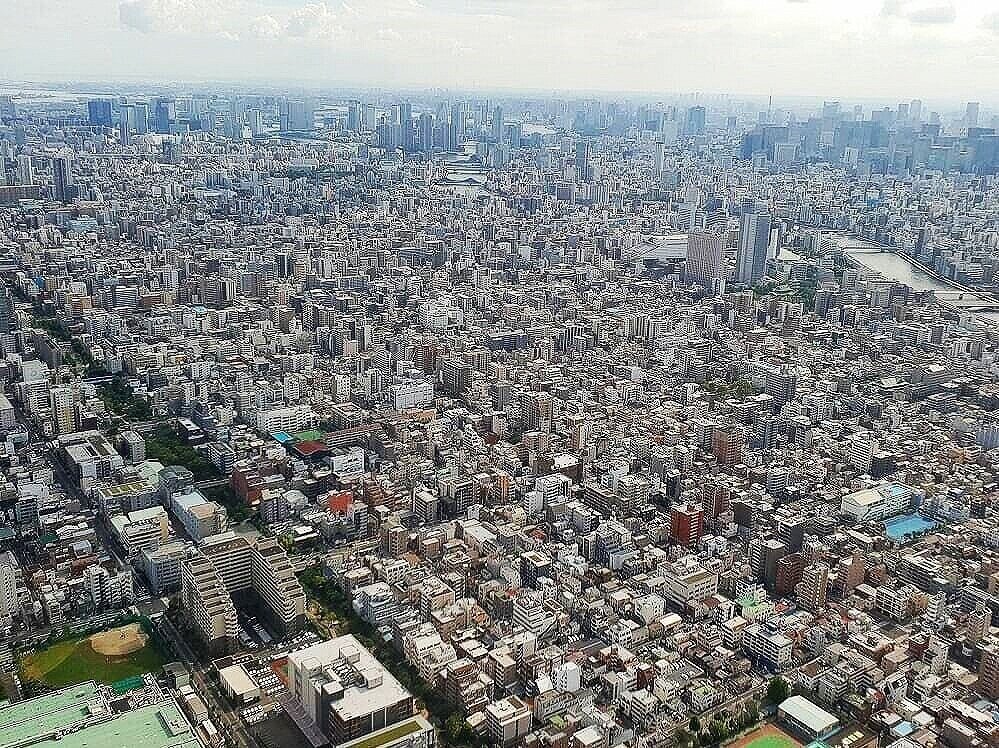 Tokyo, the world’s largest urban area with over 40 million inhabitants.

But it does work. Spectacularly well. The people play a huge role. The Japanese are among the most polite, friendly, and courteous you are likely to ever come across. While stereotypes are often lazy, the ones commonly thrown at Japan are at least universally positive. A recent online poll of overseas visitors found that the five most popular adjectives to describe the Japanese are: polite, punctual, kind, hard-working, and respectful. This means that even ludicrously crammed street spaces or subways are eerily calm and serene. The attention to detail everywhere, particularly of interior design, architecture, and the incredible Japanese cuisine, is not matched in any other country on Earth. 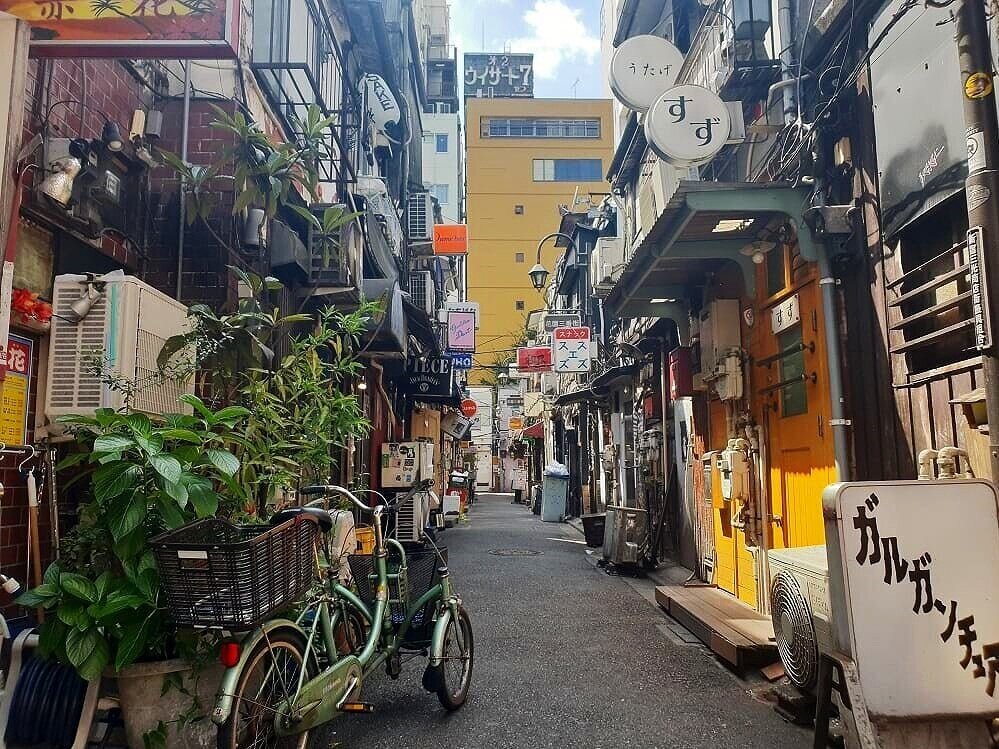 The quaint backstreets of Golden Gai, Tokyo. Note that there’s no lock on the bike. Japan has one of the lowest crime rates of any major country in the world.

Travelling in Japan feels like visiting another planet. Every trip to this island has for me in some way been profound. The sheer urbanity of cities like Tokyo and Osaka takes your breath away. And yet, you’re never far from pristine – even sacred – nature in places like the Japanese Alps. Or from ancient history and cultures shown in the temples of Kyoto, and the castles of Kanazawa or Himeji. And travel is breathtakingly comfortable and fast. Zooming around Japan in space-age Shinkansen trains is itself a delight. For these reasons, I’m not alone in my love for Japan. In the last decade, tourism arrivals have increased from just five million to almost 30 million. Almost everyone who goes loves it. You will too. 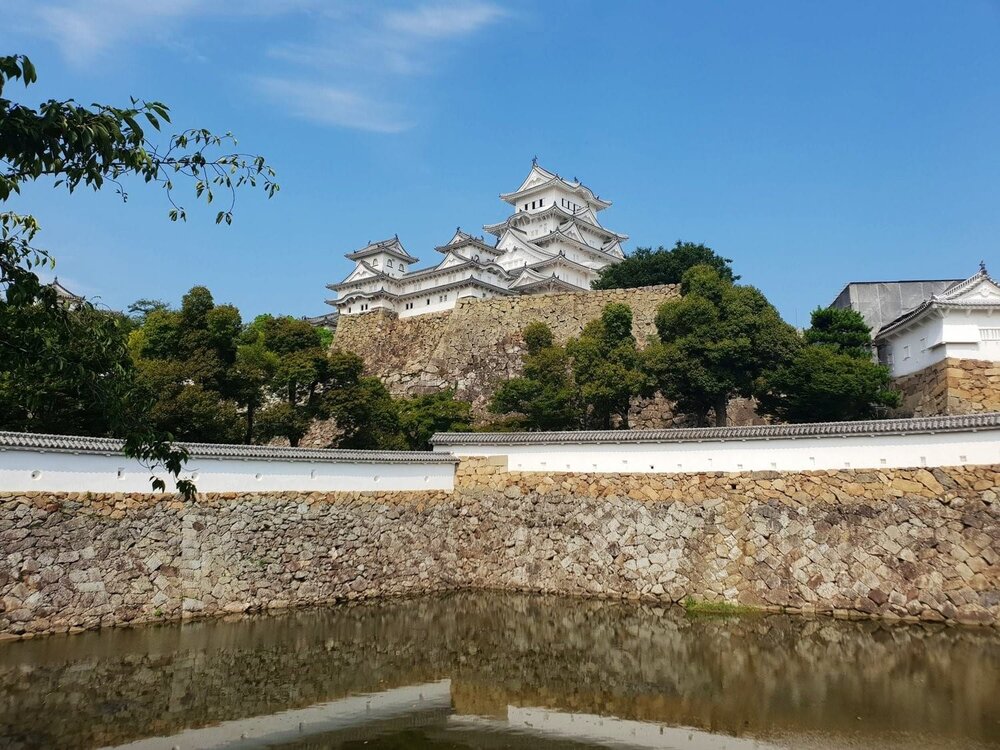 Himeji Castle. Even Japanese castles are better than European ones.

It’s popular to dislike or hate Americans, just as it is to decry the best football team or the most popular global musician. While negative feelings towards the country’s president are understandable, many people have lazily transposed a hatred for one man into a wider hatred for the 330 million people who happen to live there. Only 62 million people voted for Donald Trump. And much as you want to think otherwise, I would be genuinely surprised if literally every single person who did vote for him is ‘evil’, as it’s so often presumed they are. In any case, I’m going to shock (and annoy) those who believe that liking America in these times is somehow immoral, by professing my love for the United States of America. 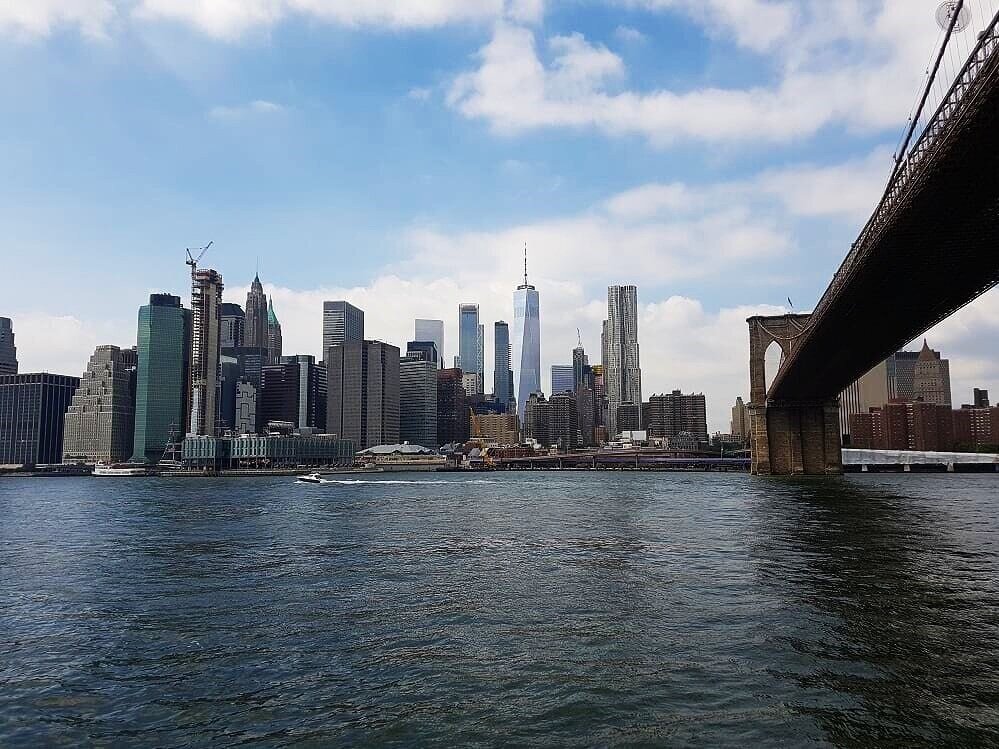 Ignore the politics, just for a second. You’ll enjoy the following paragraphs more if you can, if it’s even possible to enjoy prose more than you have been already for the last few minutes. If I could only visit one nation ever again, it would be the US… by a mile. Surprising? Not really:

These bullets allude to the true nature of America. It’s a continent, not a country. Think of America as 50 different countries rather than states, each with its own unique characteristics and widely differing views on how to live. Citizens of New York and North Dakota are likely to have very little in common, for example, particularly when it comes to politics or religion. But there are two things that hold this staggering monolith together: the English language and (the enforced) worship of the Star-Spangled Banner. 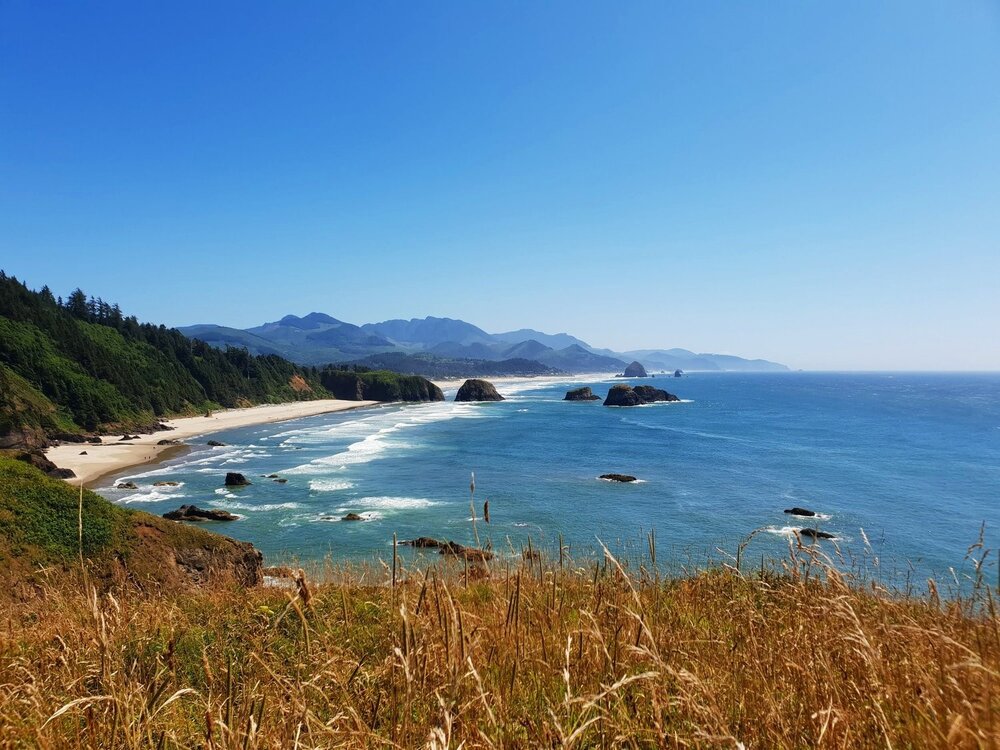 The Oregon coastline. America’s natural beauty is staggering, and vastly underappreciated in the traveller community (if there is such a thing).

The incessant flag-waving and anthem-singing makes sense only when you consider the importance of unity in such a giant nation. For all of its current issues, a constitution written in 1787 has managed to hold together 50 different ‘countries’. For over two hundred years. Oh, and has enabled it to become the most powerful nation the world has ever seen. I’ve been lucky enough to visit around 40 of America’s states, and will never stop wanting to come back for a big dose of Americana. When you visit it, you have the sense that you’re in the centre of the world. And really, you are. 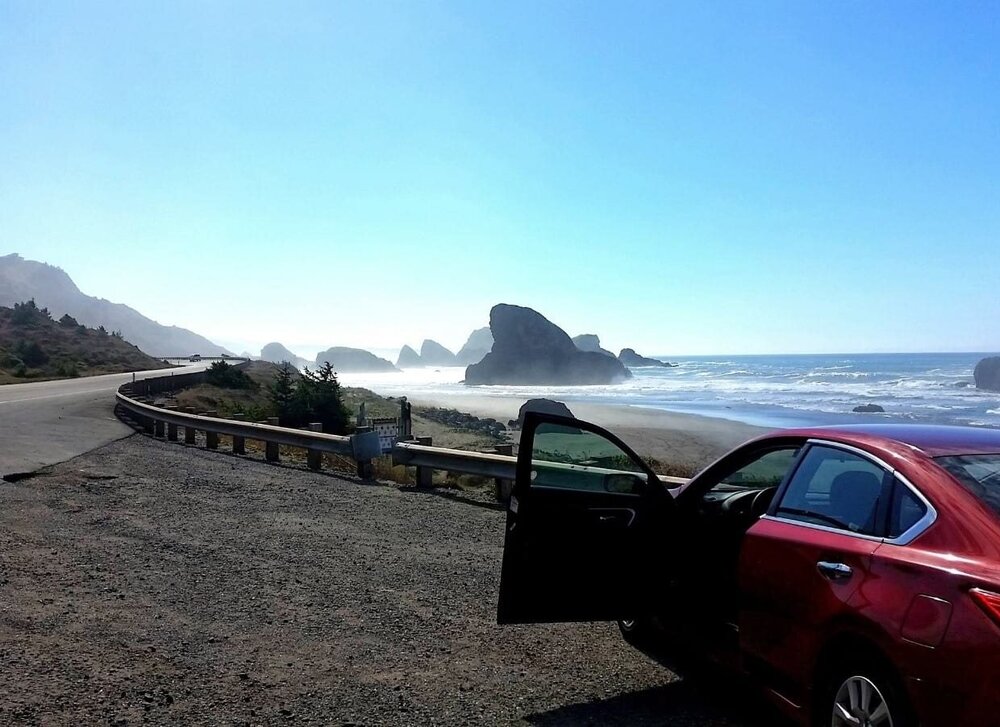 Road tripping in America is one of life’s true pleasures. 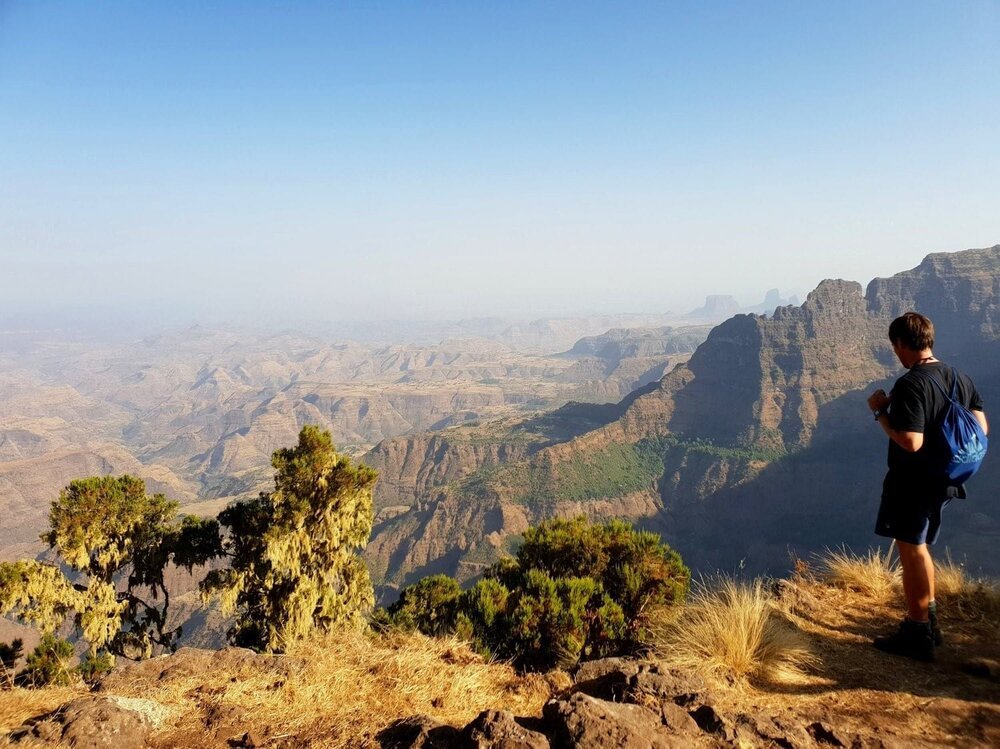 The enchanting Simien Mountains, the highlight of any trip to Ethiopia.

As a result, it has eschewed many of the things that the rest of the world takes for granted. It uses beautiful Ge’ez script – which has its roots in Egyptian hieroglyphics – instead of the Latin script used across most of Africa. Ethiopia is also seven years behind the rest of the world, meaning that the year is currently 2013. To further complicate matters, Ethiopia also measures time differently. The 24-hour clock starts at sunrise (01.00). Sunset (12.00) is then followed by 12 hours of darkness (12.00 to 24.00). Sort of logical. But less so if no-one else in the world does the same. 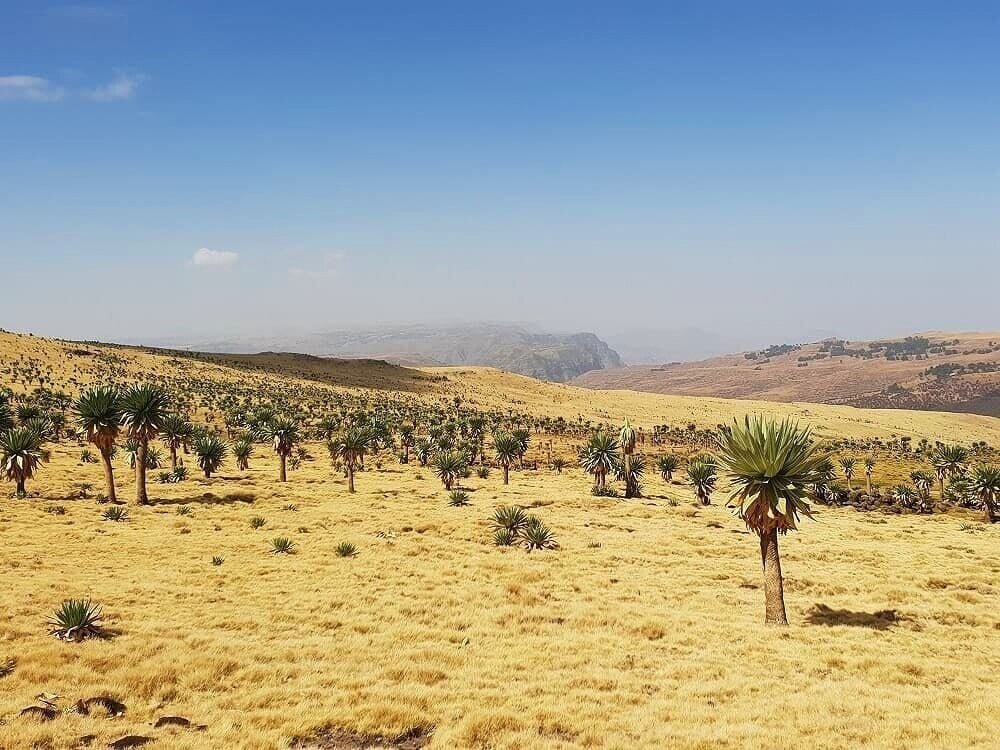 The highlands of the Simien Mountains. This picture was taken at an altitude of over 4,000 metres.

On top of these idiosyncrasies, Ethiopia has some of the best food anywhere on Earth, particularly for vegetarians (I tried again not to mention this, but it’s becoming clear to me that part of my choice not to eat meat is simply to be smug. The delicious feeling of insufferable virtue signalling is as tasty as a steak in my book). Then there are the sights. From the stunning highland cliffs of the Simien Mountains, to the rock-hewn churches of Lalibela, and to the ancient castles of Gondar, Ethiopia packs a punch. You’re certain to love it. 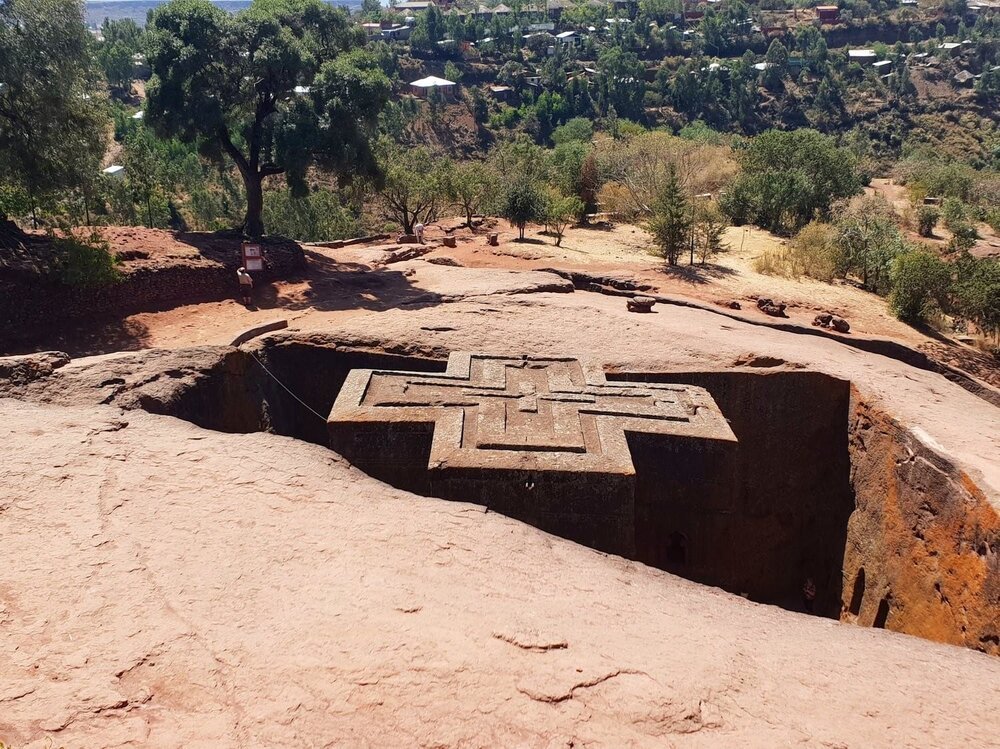 The rock-hewn churches of Lalibela. They didn’t look like they were easy to build. Loving Jesus can take a huge physical toll.

Bhutan is perhaps the most serene country on Earth. A country surrounded in mystery; it has only opened up its beauty to tourists in the last couple of decades. Bhutan is an enigmatic land covered in jagged Himalayan peaks, and dotted with red-robed monks and temples. It’s shrouded in superstition, as well as a totally unique approach to life and to development. 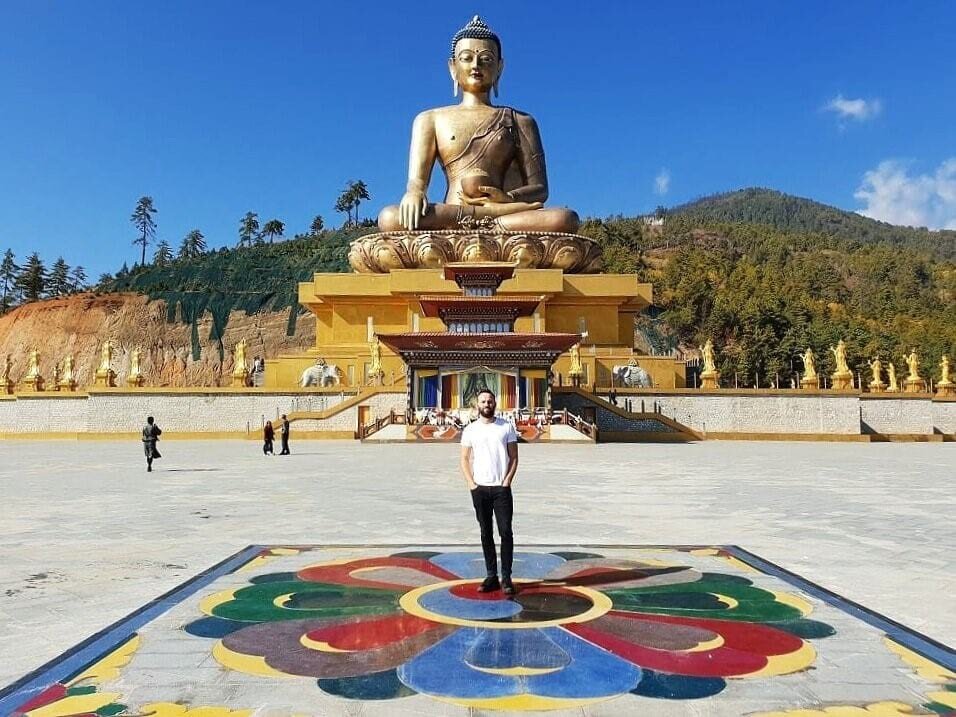 A giant gold statue of the Buddha in Thimphu, Bhutan. The Buddha himself taught his followers not to worship any one god or person. Clearly, to no avail.

As a fully Buddhist country, Bhutan is the only country on Earth that uses Gross National Happiness (GNH) rather than GDP as its main national development measure. Rather than narrowly focusing on economic growth, GNH considers the preservation of the environment, sustainable societal development, and the promotion of culture in its approach to development. This has helped the country to maintain a unique respect for its stunning natural environment, which is a delight to sample. 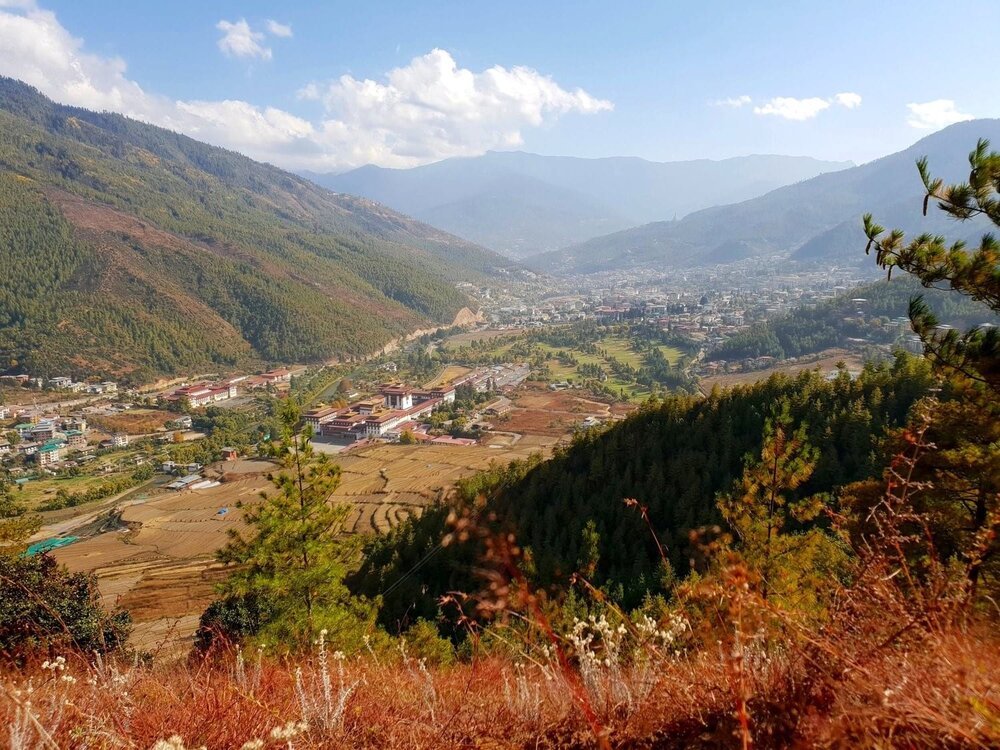 For the backpacker, Bhutan is not a dream. A US$250 daily minimum spend is required to visit, and you have to go with a tour group. With a population of less than a million, the authorities wanted to prevent it from being overrun when it opened its doors. I visited for only five days as a result. But due to its small size, you can still pack a lot in. From the epic mountain scenery accompanying almost any road trip, to the stunning Tibetan architecture of Thimphu and the Punakha Dzong, and to Bhutan’s jewel, the Tiger’s Nest, there is something for everyone (by everyone, I mean anyone who has over US$250 a day to spend travelling, sadly). Despite the cost, Bhutan will leave a lasting imprint on you, which is sure to make your trip worthwhile. 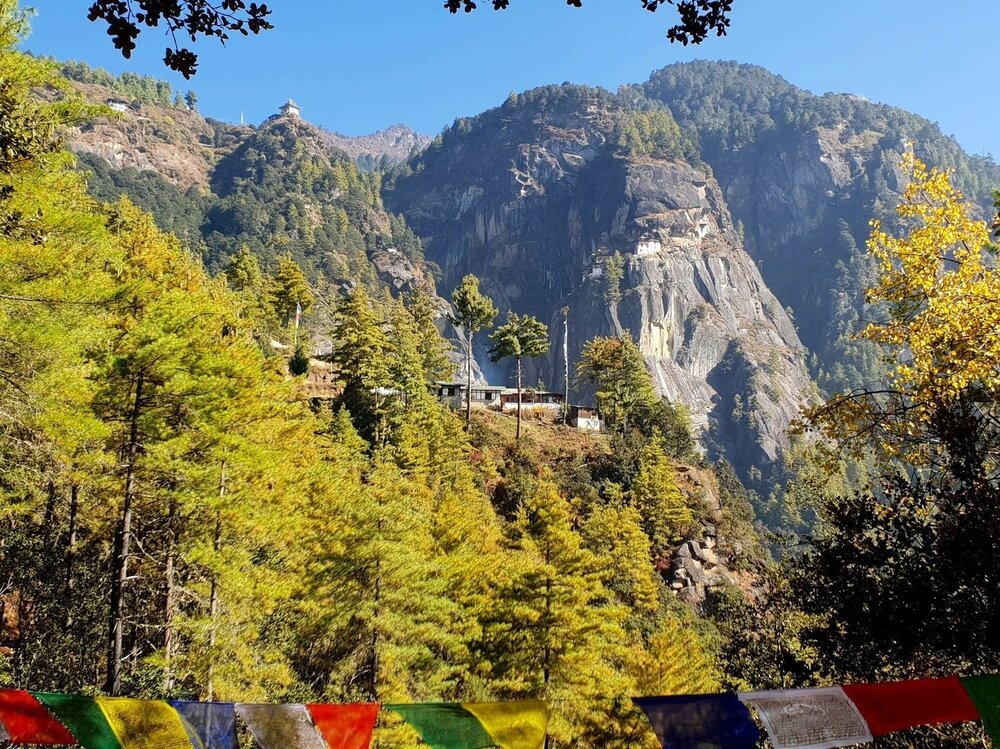 If you look closely, your face will be nearer to the screen and you’ll probably be pulling a weird facial expression without knowing. You should also be able to see the Tiger’s Nest, tucked into the cliffside.

Chile is one of the most beautiful and geographically diverse places on the planet. For good reason: it’s long. It stretches around 4,000km. In terms of natural beauty, it takes the top spot in Latin America. And would be vying with Namibia to be the most naturally beautiful small(ish) country on the planet, with stunning and secluded landscapes that must be seen to be believed. No pictures do it justice. 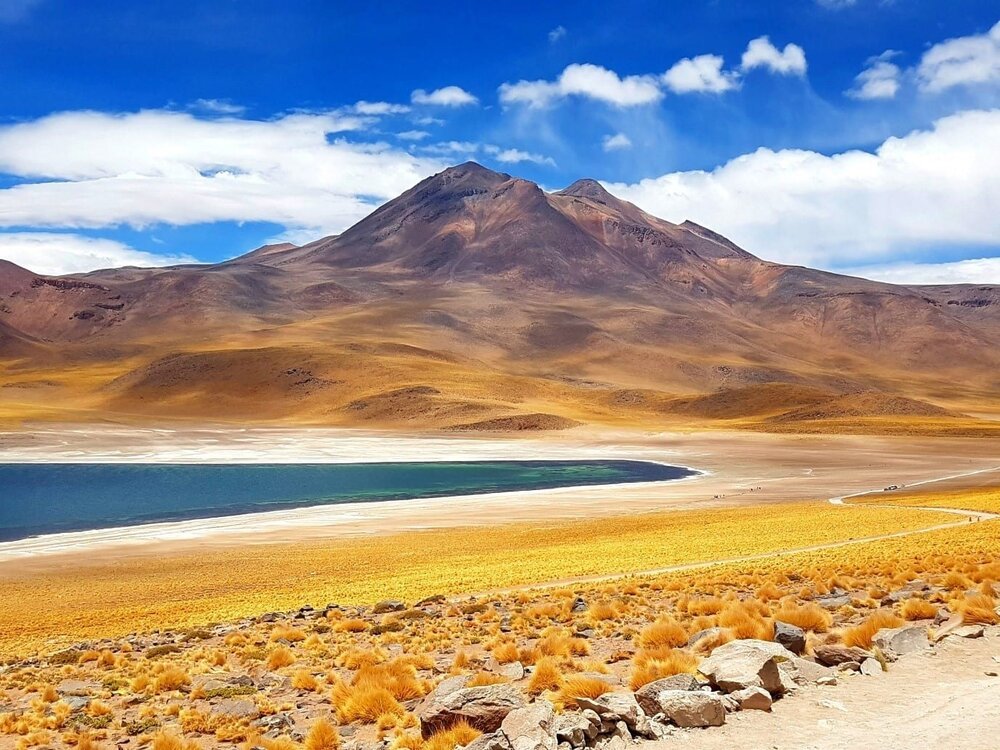 Starting in the north of Chile, you have the most otherworldly landscapes that are possible to experience, in the driest place on Earth. The deserts of San Pedro de Atacama are simply wondrous. Orange craters, pink lakes, salt flats, and jet blue skies combine to make you feel like you’re on another planet. Add this to the fact that the stargazing here is the best anywhere on Earth – the world’s largest telescopes are based here – and there are times where you do actually start questioning whether San Pedro is of this earth. 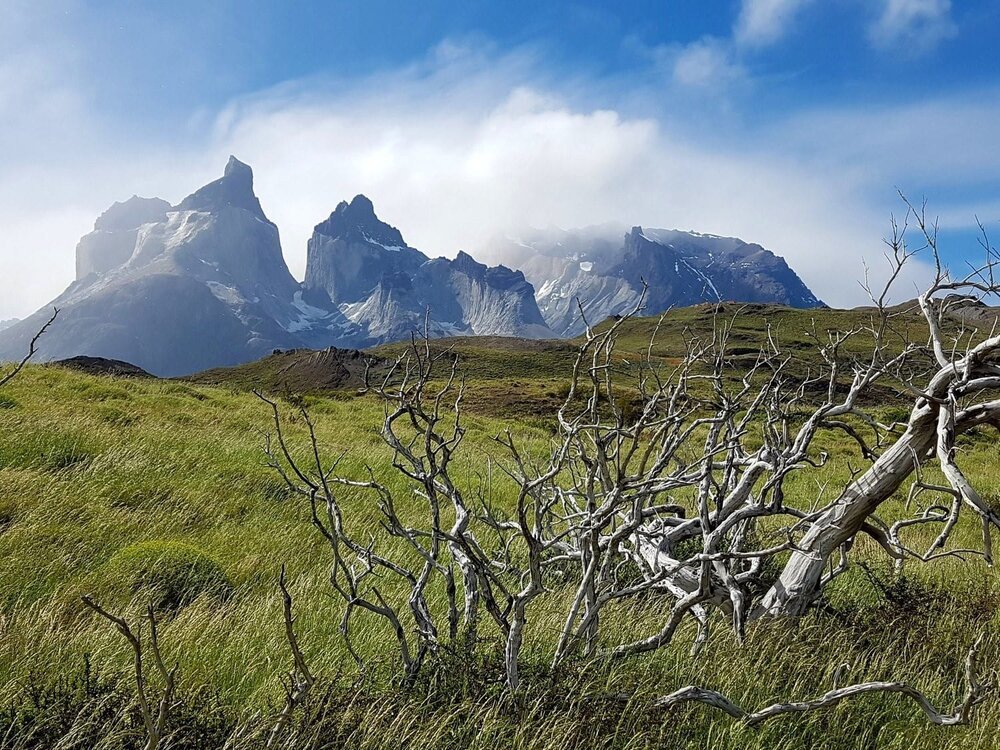 Heading south, via the hustle and bustle of Santiago and the edgy coastal town of Valparaiso (my favourite city in South America), the scenery changes gradually. Deserts give way to scrubland and vineyards, before morphing into the epic forests and mountains of the south. Which leads you to Patagonia. In Torres del Paine, you have mountains, llamas, giant floating glaciers, and arguably the most beautiful national park on Earth. For the northern deserts and Patagonia alone, Chile squeezes into my top five, with Namibia nipping at its heels just out of sight. 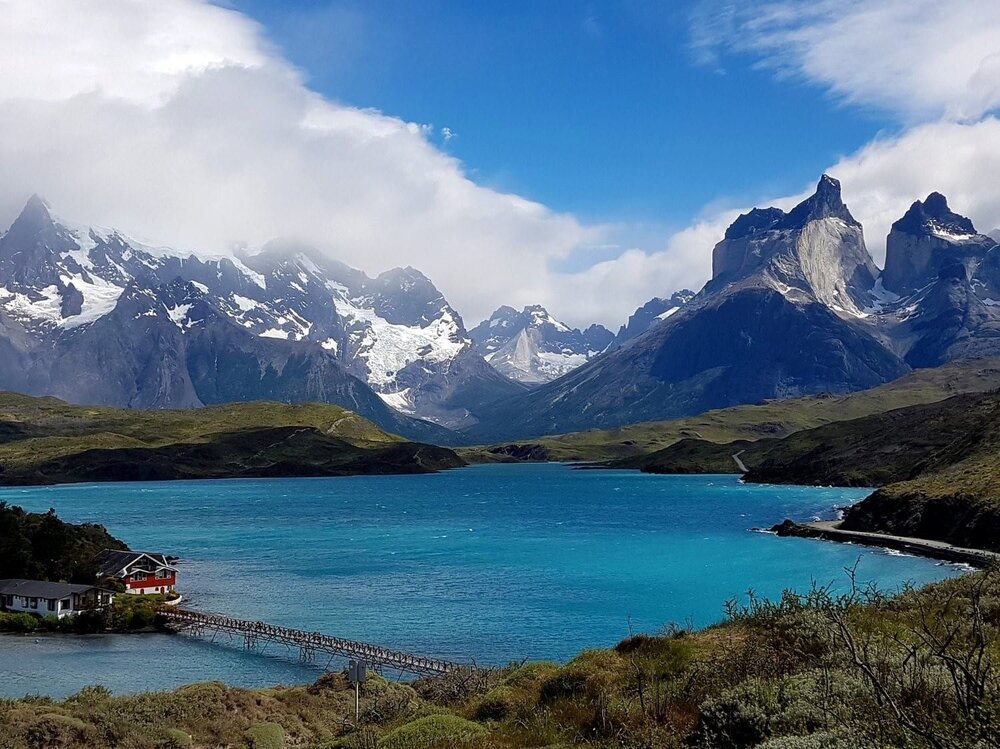