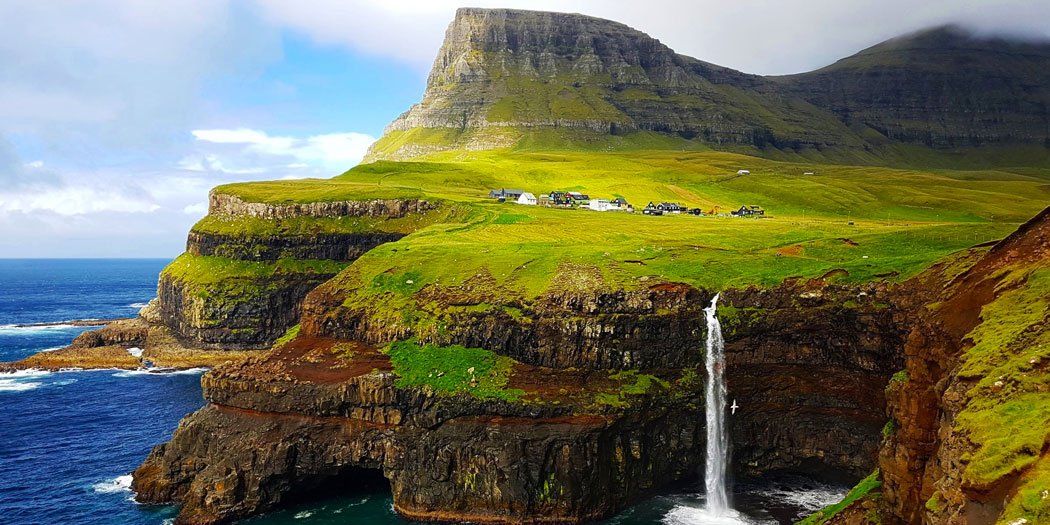 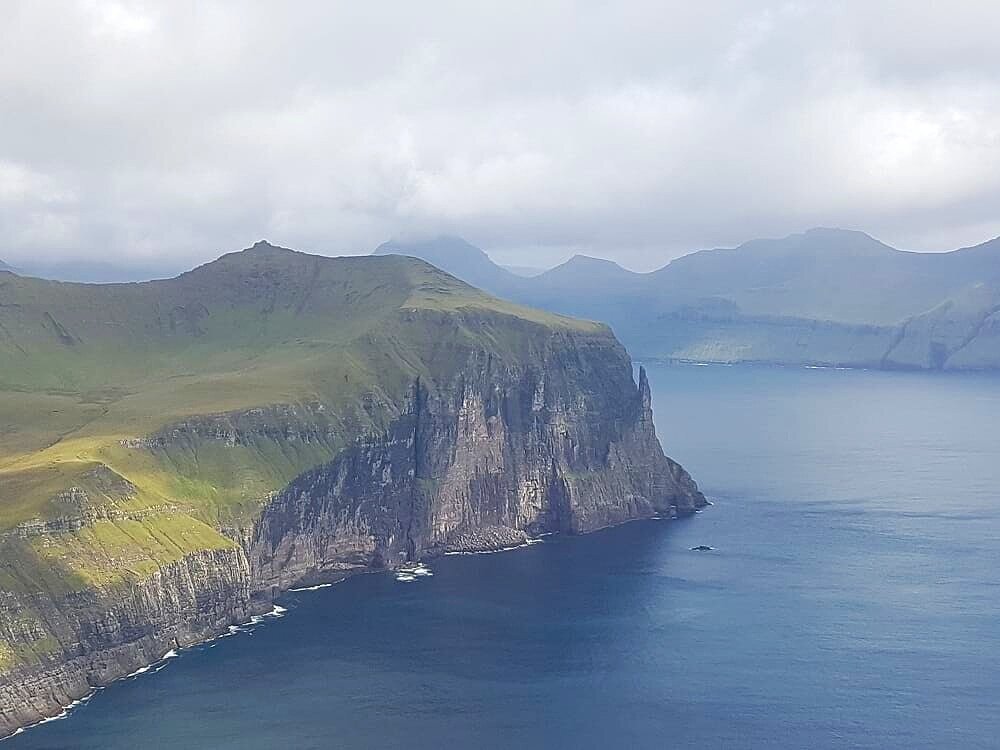 Landing in the Faroe Islands. 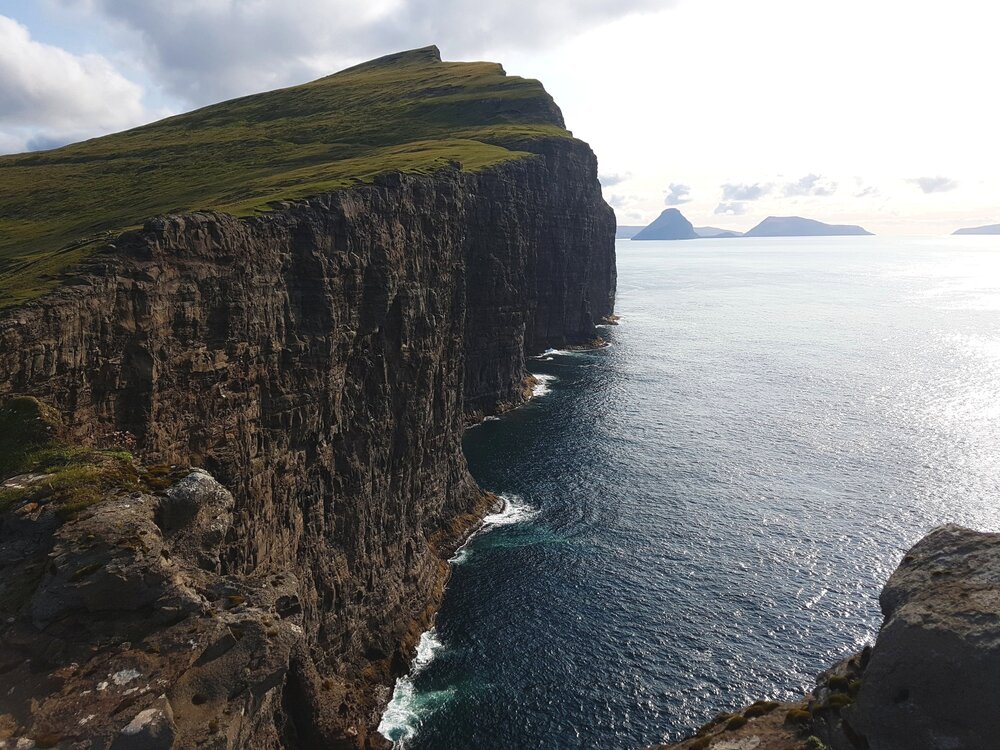 It’s surprising how these spectacular landscapes have remained largely off the map, despite being just a short hop (a fair row?) from Scotland and Denmark. Visit as soon as possible. The publication of an article on this blog is generally followed by a surge in tourist arrivals to the destination in question. Many tourists come here to discover a ‘new’ Iceland, the Faroe Islands’ otherworldly big brother to the northwest. Tourism in Iceland has boomed recently. Thus, isolation and unspoiled natural beauty are harder to find. In my most recent trip to Iceland, many of my attempts to take photos were ruined by other tourists. Of course, whenever I visit a popular tourist destination, I am in no way contributing to these sights being overrun. 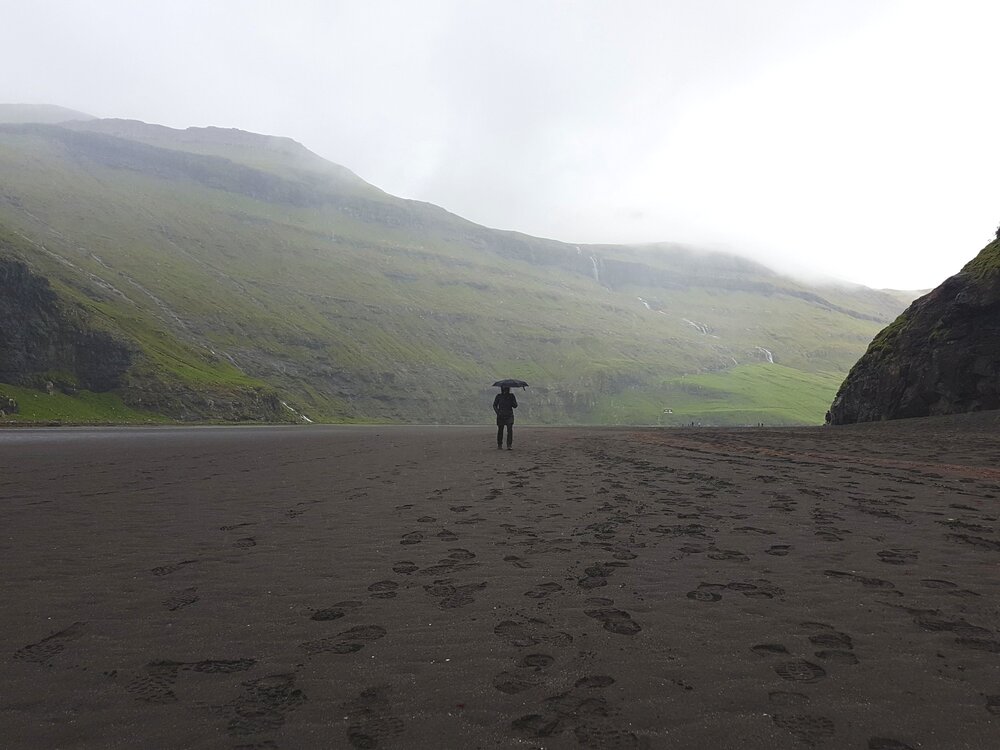 Dark and atmospheric landscapes are the norm in the Faroe Islands.

Frustratingly, the Faroe Islands are not a country. They have been part of Denmark since 1814, and self-governing since 1948. For my egotistical quest to visit all the bits of the world arbitrarily separated by invisible lines that exist only on maps and in the minds of Homo sapiens, this was a blow. 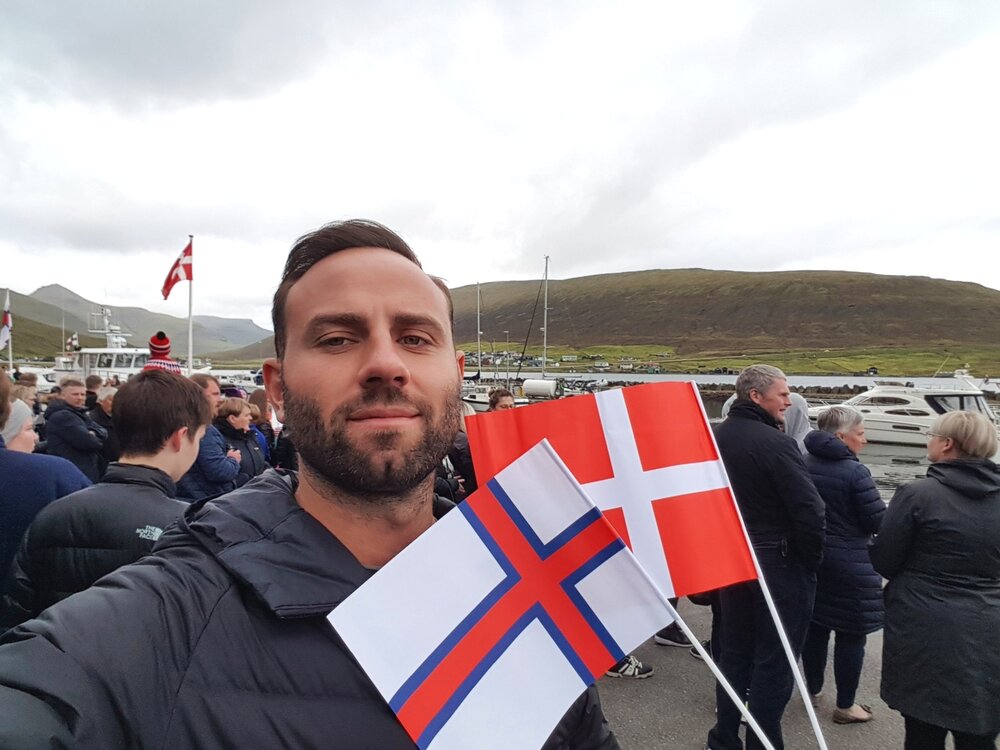 Two coloured bits of cloth, representing Denmark and the Faroe Islands. A human man, me.

Against this backdrop, I wondered whether there was even any point in visiting (not really, the actual enjoyment of travelling still takes precedence over the ‘visit all the world’s countries’ bullet on my to do list). Interestingly, the Faroe Islands are not part of the European Union (EU), but Denmark is. And you can tell. People in the Faroe Islands walked jauntily, with a palpable air of having ‘got their country back’. The sense of the Faroese people ‘taking back control’ literally seeped out of their pores. A similarly glorious and problem-free future is currently unfolding in my country, the UK. 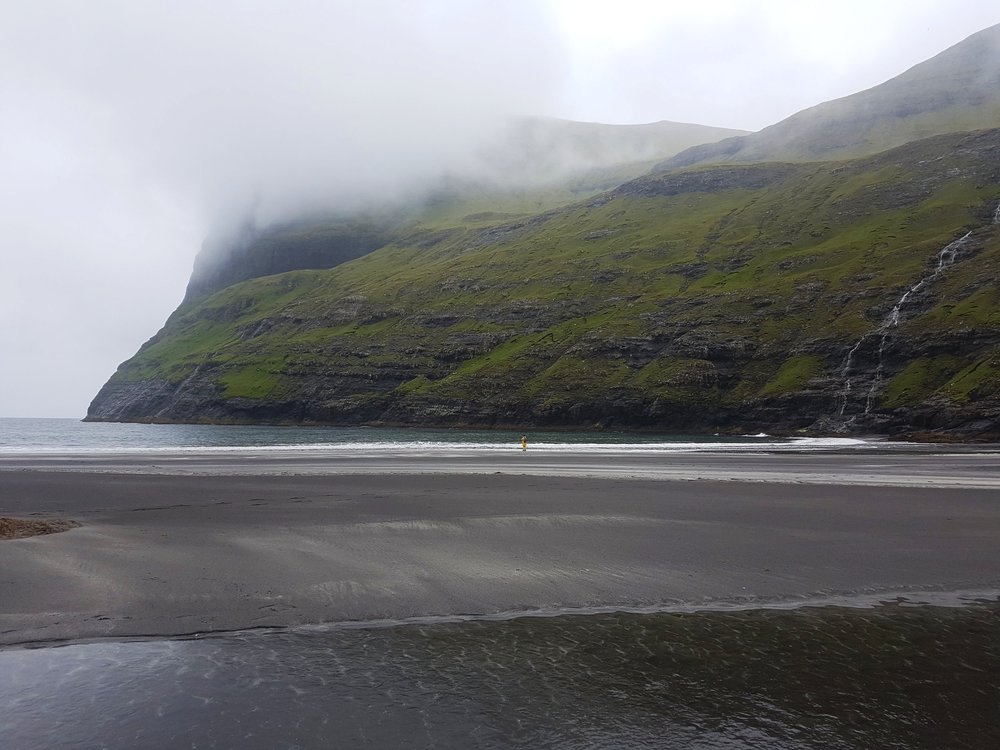 You’re right, this is a fantastic photo.

The Faroe Islands are the best small destination in Europe. Their population is just 50,000, compared to 70,000 sheep. Everything here is dramatic. Even the flight was an adventure (although I would argue that the concept of us simply flying at all is in itself ludicrous). The British built the airport during World War II. The airstrip was intentionally hidden in a valley and between cliffs. With a runway also seemingly far too short for a commercial airline, the pilot warned us that the landing would be less gentle than normal. It was an exhilarating or harrowing experience, depending on your disposition for flying. 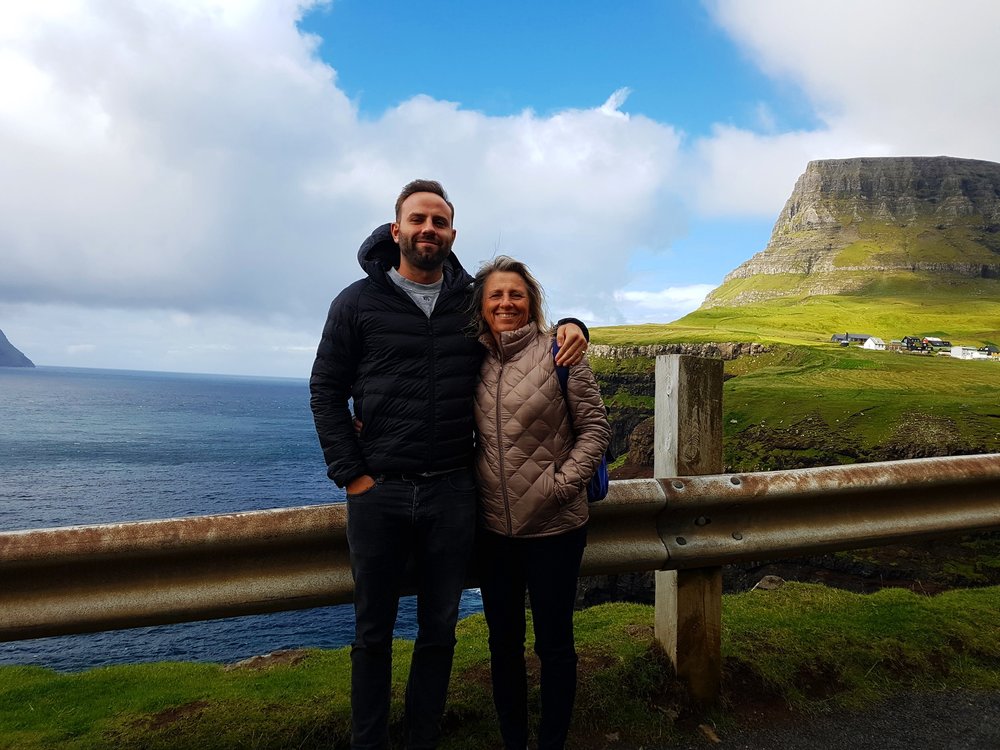 Mum and I. We both appear to be very pleased to have ruined a nice photo by standing next to a rusty road barrier. 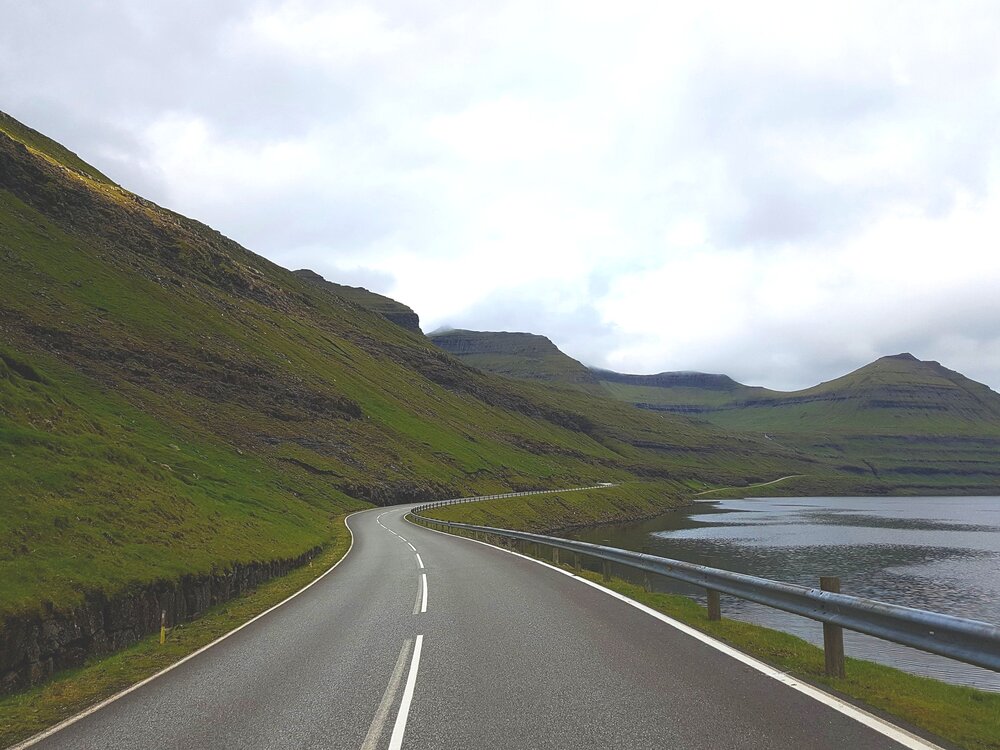 The open roads of the Faroe Islands. A Clarkson-free area.

On landing, my mother and I hopped on the road. Not literally, I must add. That is to say, we got in a car. The Faroe Islands’ small size and superb roads make it the perfect road trip destination. I’m hesitant to sound like a ‘petrol head’ here. There is objectively no worse social group one could choose to affiliate themselves with. However, I have to say, gliding through the island’s lush valleys and beside its atmospheric lakes was a magic experience. Not good enough to make me watch Top Gear, however. 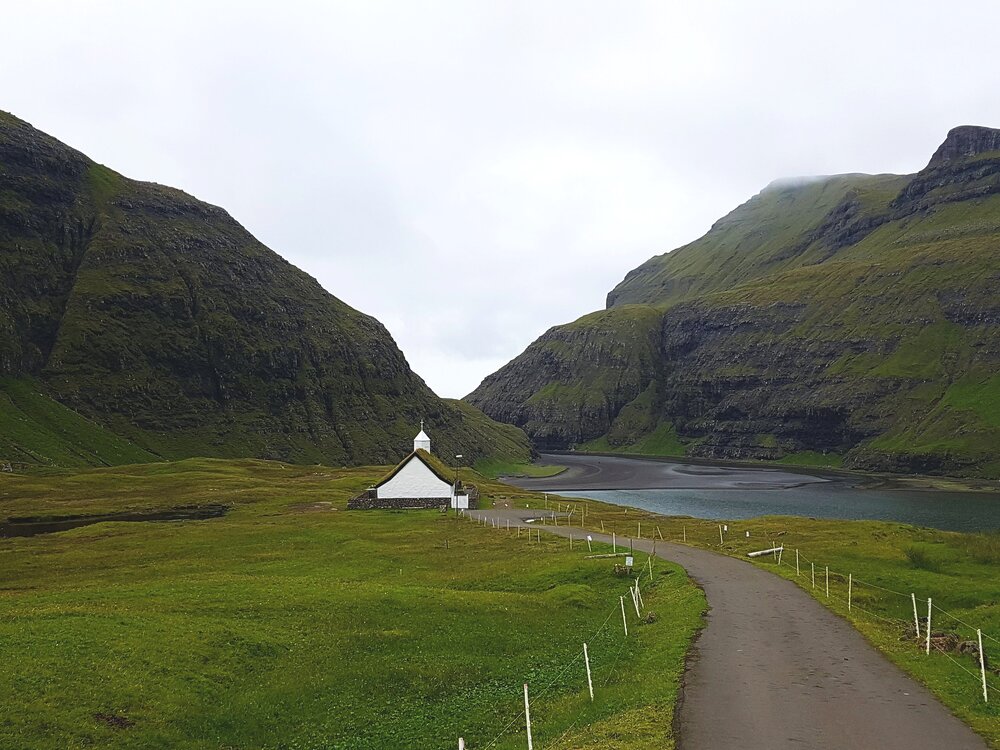 Saskun Village. Optimisitc use of the term ‘village’ aside – it consists of a church and a couple of houses – the setting is spectacular.

Mulafossur Waterfall was our first destination. The waterfall, pictured at the start of this post, plunged off a dramatic cliff into the wild Atlantic Ocean. And yet all I could do was think about how they could have filmed Lord Of The Rings here rather than in New Zealand. Hiking opportunities abound. Hikes to Saskun Village and the Cleft Of Gjov (which actually sounds like a place in Middle Earth), offered endless otherworldly and dramatic vistas. A boat trip to the aptly named Vestmanna Bird Cliffs was also wonderful. A particular highlight was seeing some birds. On a cliff. 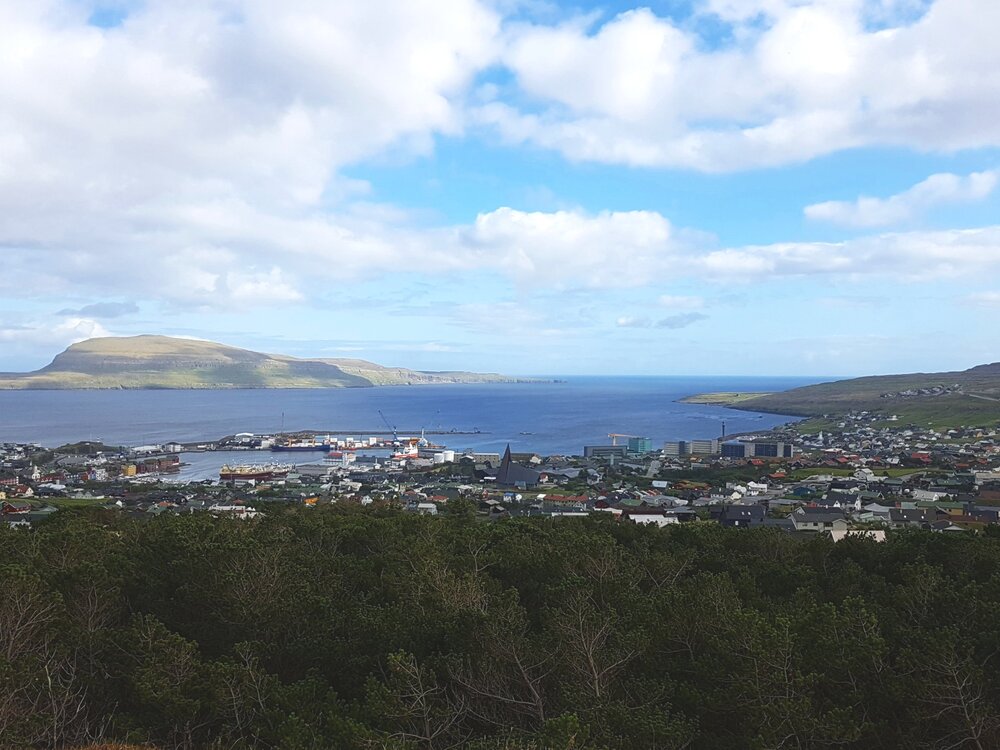 The capital, Torshavn. For such a small town, it’s surprisingly lively. Although it doesn’t have much to compete against. 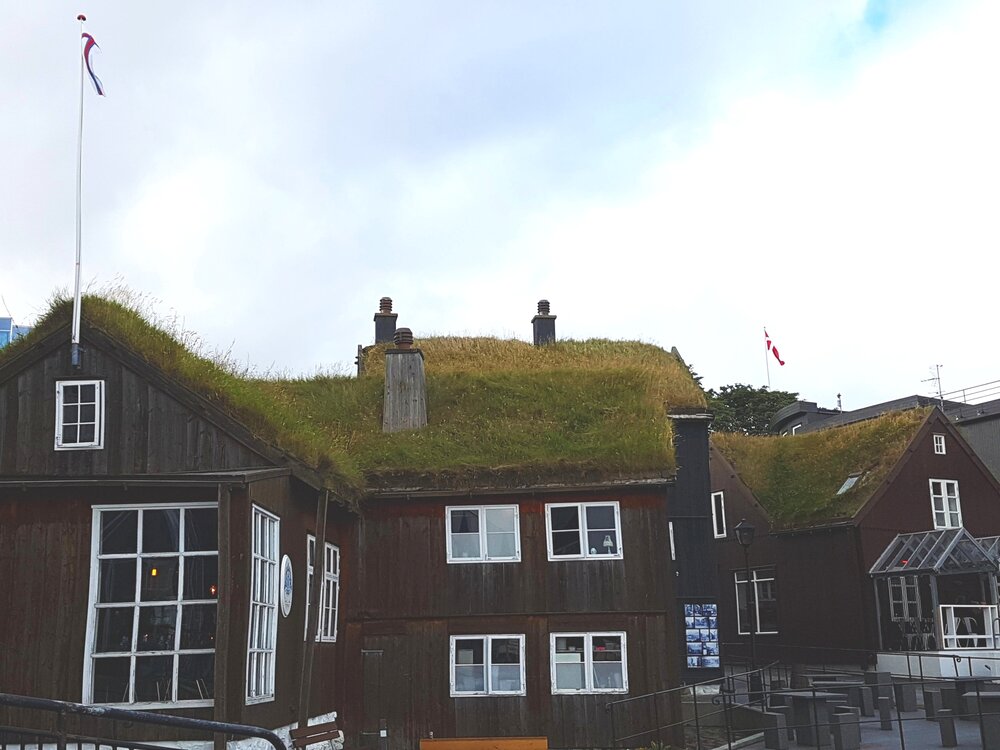 The centre of Torshavn. A more refined version of the architecture displayed in the Teletubbies.

Desperate and underwhelming attempt at a pun in the subheading aside, the capital packs a punch. Even if I have literally no idea what this phrase means. Torshavn belies its tiny population of just 20,000. Some of the restaurants are superb, likely catering for the influx of insufferable post-Iceland tourists. Like my mother and I, who visited Iceland together a year previously. The charming old town, Tinganes, highlighted the best of the traditional Faroese architecture, notable for wooden structures and grass roofs. Parliament met for the first time here in year CE825, thought to be one of the first parliamentary meeting places in the world. The Faroe Islands are so small that the prime minister’s phone number is in the local phone book. 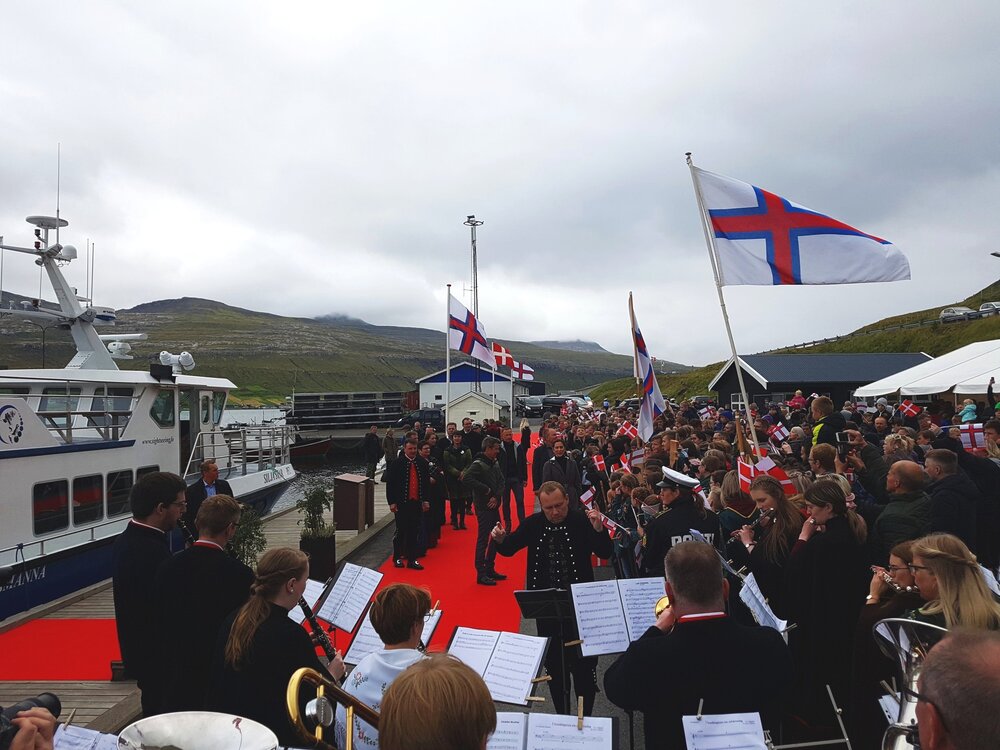 Years ago, a man was born to a family who for some reason other humans hold in high esteem. And as a result, sights like this have greeted Danish Crown Prince Frederik wherever he has gone for the vast majority of his life. He was good at waving and shaking hands, to be fair.

Hiking And High-King (The Pharaoh?) Of Denmark

Aside from a number of truly epic treks, one of the strangest interludes of the trip was stumbling upon a royal visit. Frederik, the Crown Prince Of Denmark, was given the red carpet treatment and greeted by hundreds of well-wishers. The level of security was impressive. The prince dramatically arrived in a convoy of six black armoured cars, presumably so any would-be attacker would not know which car he was in. Given that the Faroe Islands have the lowest crime rate in the world, this seemed a tad excessive. 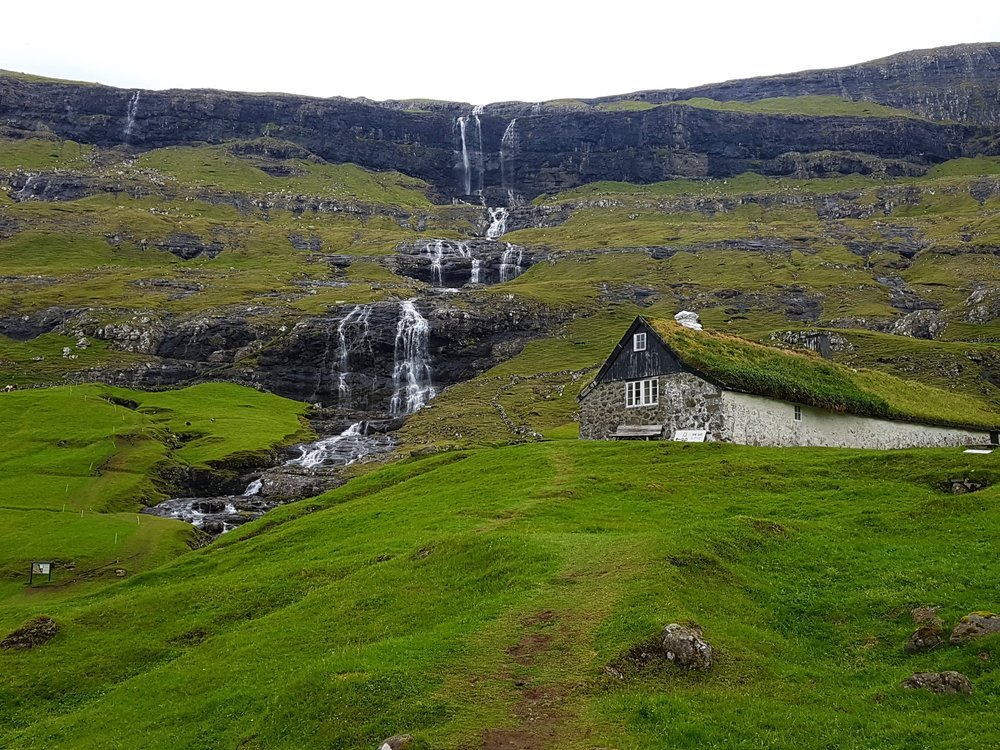 Looking up at a grass-roofed cottage in front of a towering cliff-face.

His Australian wife Mary joined him. This would have been a hugely exciting and poignant experience for me, if I cared an iota about royalty. She is alleged to regularly feature in OK! magazine, a journal whose title is presumably an ironic testament to the quality of content held within it. That they met in a pub, and she is a ‘commoner’, is for many people a reason to display a form of moderate awe. 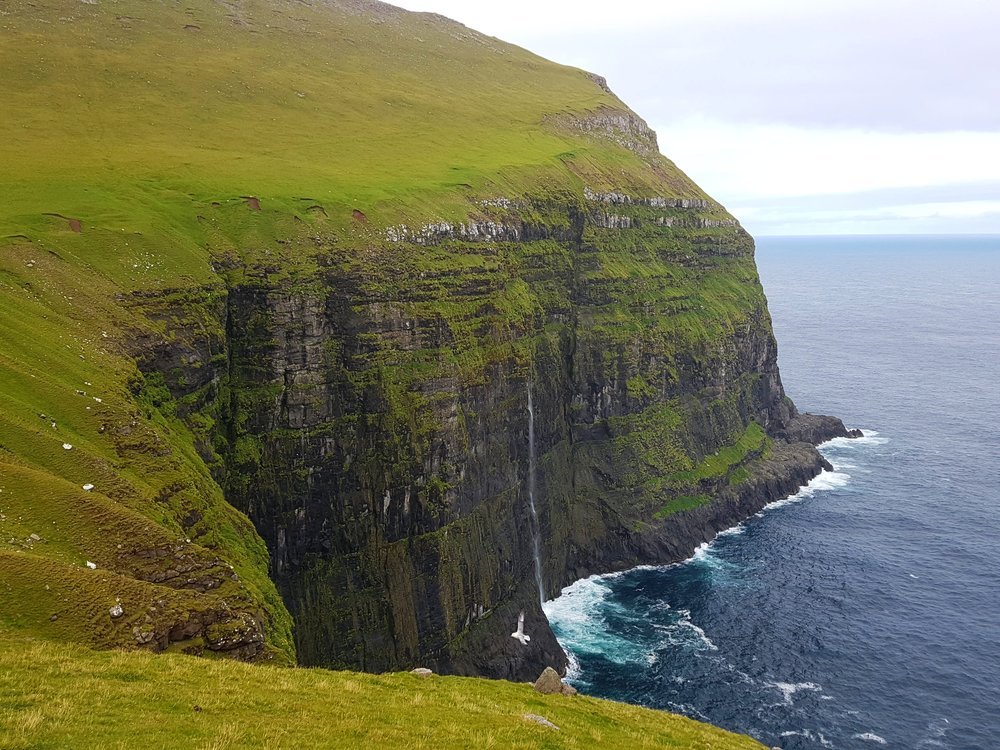 With this article out in the ether, I strongly advise you to book your flight immediately. For a short break in Europe, nowhere compares. To witness the surreal quality of the landscapes in these remarkable islands, you usually have to spend much longer in an airborne pressurised aluminium cylinder. There are few places as serene and tranquil as these islands, and certainly nothing that compares so close to home. 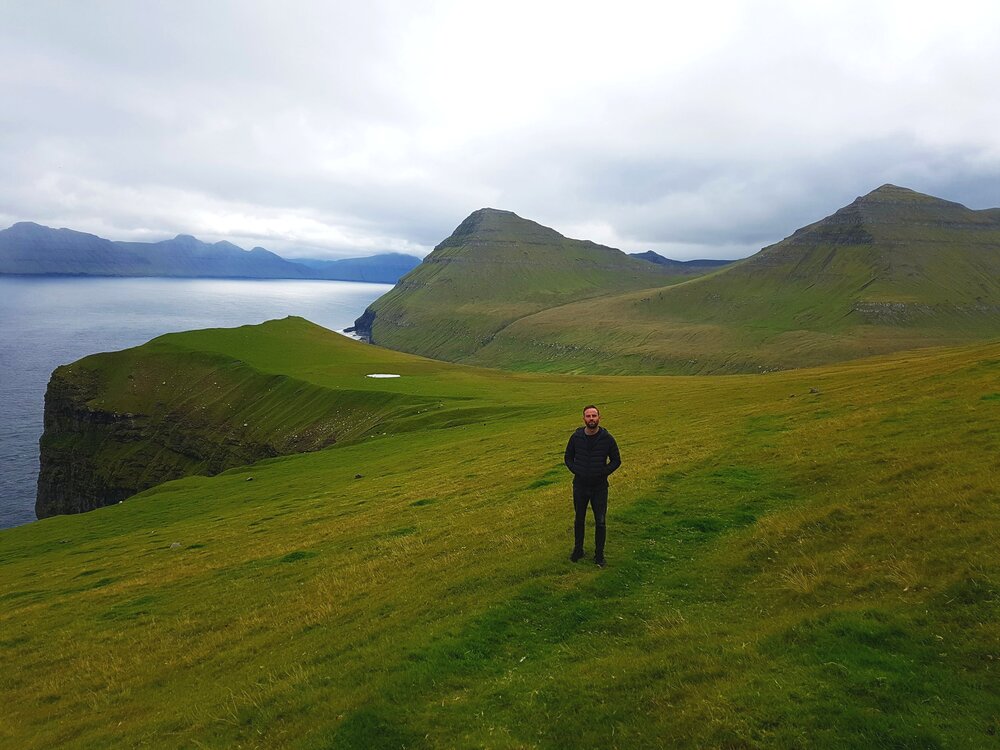 This is the sort of picture that folk singers use as album covers, to give the impression that they spend most of their lives roaming around in solitude pondering their existence. At the time this photo was taken, the profundity of my thoughts extended to how hungry I was.