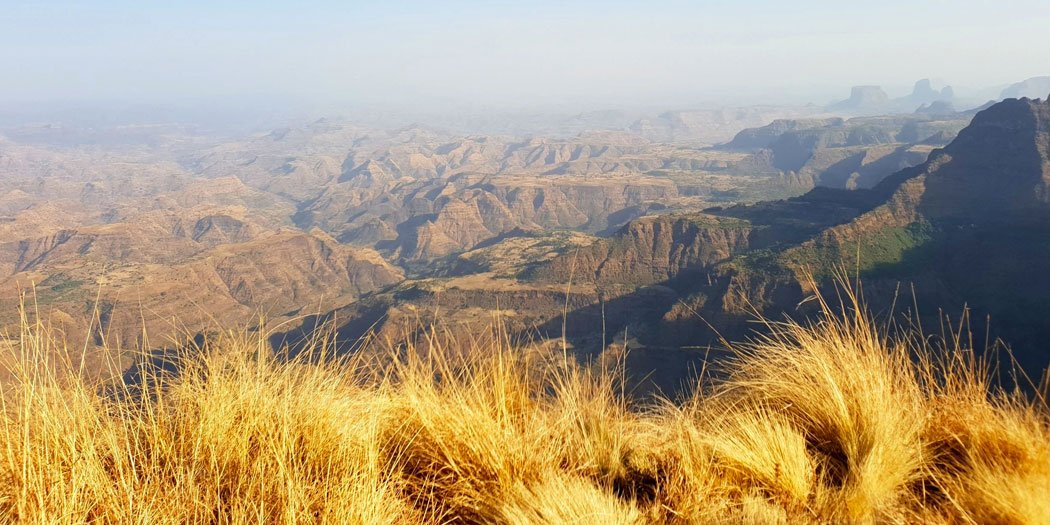 Country #133. Ethiopia is a truly unique country. Its idiosyncrasies make it the most interesting country I have visited in Africa, and one of the most beguiling and beautiful destinations on the planet. African, European, and Middle Eastern influences combine to create one of the most diverse countries on the planet. Perhaps more importantly, the coffee is strong and the delicious cuisine is spicy enough to make you question even the most seemingly innocuous of stomach rumblings. In all of the countries I’ve been fortunate enough to visit, Ethiopia definitely makes the top five.

Alex, negotiating one of the fantastic free trade deals we were all promised after Brexit.

My friend Alex and I touched down in Addis Ababa, to an air of excitement. The red carpets had been rolled out for a meeting of the ‘African Union’ (AU). How naïve to believe a continent’s nations could band together for the greater good, when splendid isolation is en vogue back home in the UK. We stood behind a man wearing one of the best outfits I’ve ever seen in the passport queue. Draped in turquoise and yellow, he accessorised his look with a diamond encrusted hat and matching cane. The border official asked for his profession. “King,” he replied. Seeing her confused expression, he elaborated, “…emperor”. After a brief chat, we learned he was a Nigerian king. Or claimed to be, at least. 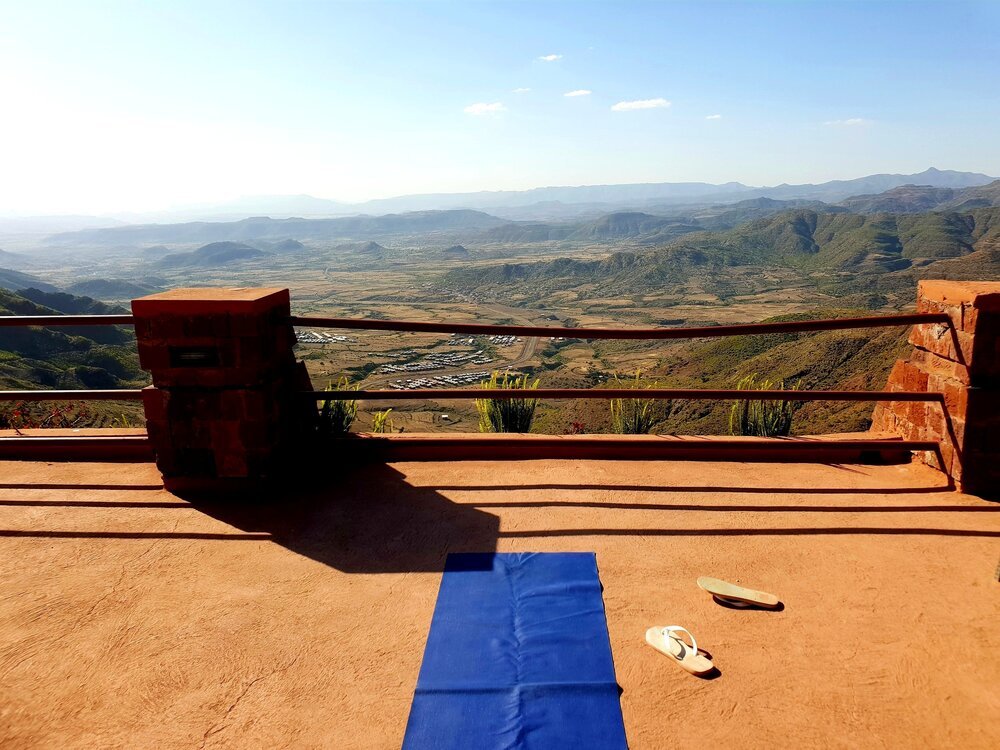 I could have chosen a picture without the yoga mat. But without doing so, I would have been less able to convey my communal narcissism.

A Trip Back In Time, Literally

Ethiopia seemed immediately unique. Particularly having flown in from South Africa, which seemed comparatively western. English gave way to beautiful Ethiopic (Ge’ez) script. Now you understand the clever pun in the title. The script has its roots in Egyptian hieroglyphics. We were also struck by the date (not literally, ‘the date’ is an abstract concept, not a sentient being). It was January 27th 2012, rather than February 9th 2019. Ethiopia is seven years behind the rest of the world. I had been transported back to a simpler time. A pre-Brexit world. The Olympics were coming to London and hangovers were vaguely tolerable. To further complicate matters, Ethiopia also measures time differently. The 24-hour clock starts at sunrise (01.00). Sunset (12.00) is then followed by 12 hours of darkness (12.00 to 24.00). Sort of logical. But less so if no-one else in the world does the same. 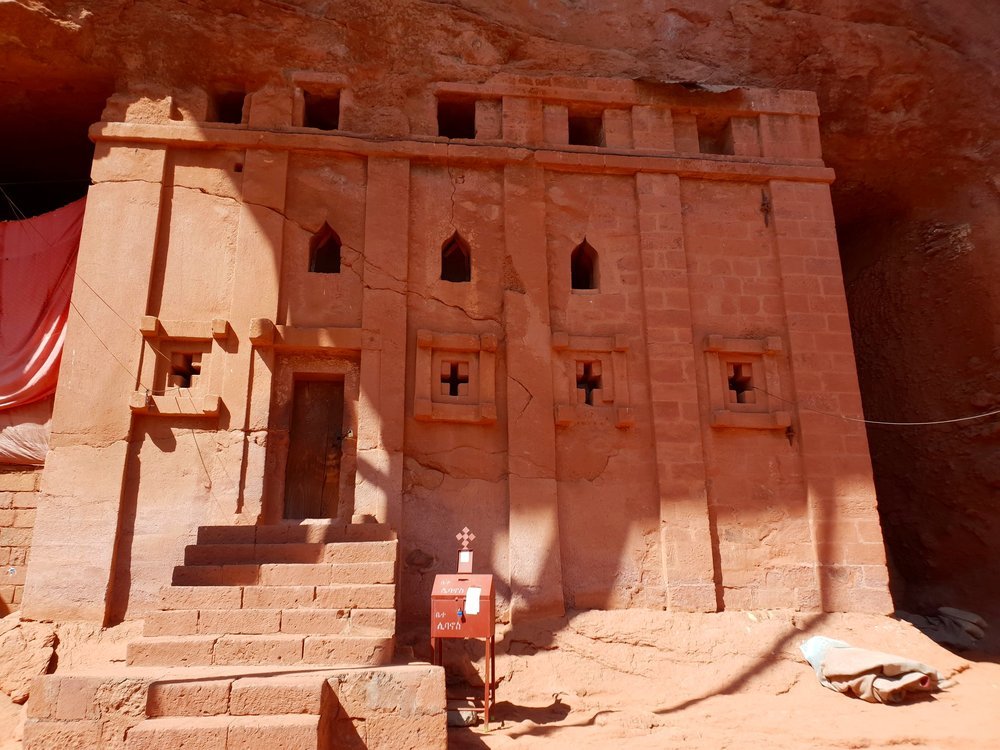 Rock-hewn church in Lalibela. One of many.

Why the strange calendar conventions? It partly reflects Ethiopia’s use of the Gregorian, and not Julian, calendar. And also due to the country disputing the timing of the alleged birth of the alleged ‘magic baby’ (referred to colloquially as ‘Jesus’). Christmas is not celebrated here on December 25th. So when Bob Geldof released a charity single in response to the 1983-85 Ethiopian famine, posing the question, “Do they know it’s Christmas”?, “Probably not,” would have seemingly been the appropriate response, “Ethiopia celebrates Christmas on January 7th”. I feel loath to tell you I stole this joke, almost verbatim, from my friend Alex. While amusing, those of you who rightly noted that joking about a famine is crass in the extreme can direct your anger towards him. 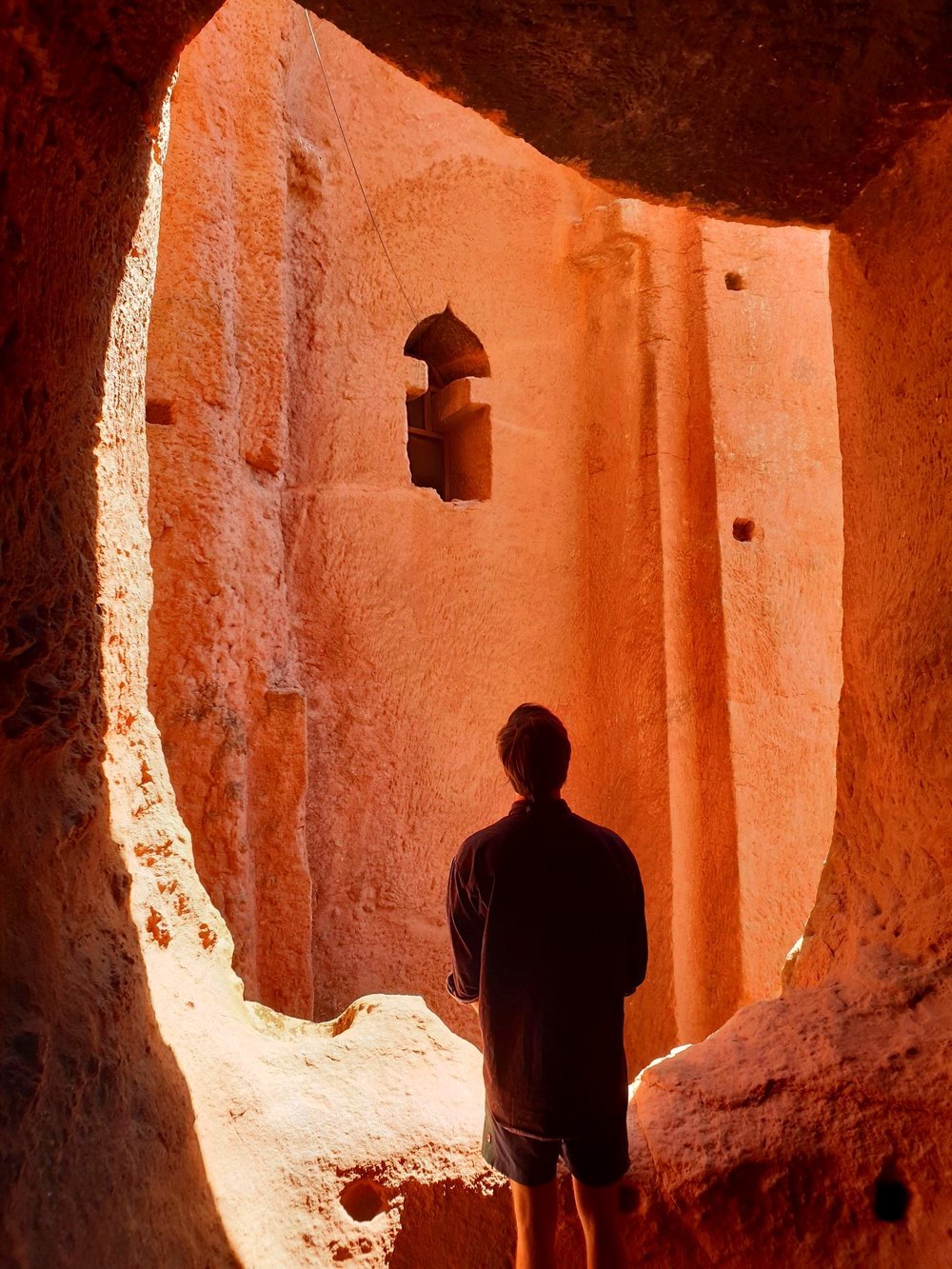 A window carved into a red dirt wall, in Lalibela.

A short flight took us to Lalibela, famed for its rock-hewn Christian churches. You don’t know what ‘hewn’ means, do you? Built into the rock, I learnt upon arrival. The churches are stunning, dug deep into bright orange rock. They were built in the 12th century by King Lalibela, who eschewed the common sense approach of constructing buildings above ground. Instead, he went for the most labour intensive method possible, safe in the knowledge he would not have to lift a finger. The 11 churches took hundreds of Christians 25 years to build. At the time, the local population were living in mud huts with thatched roofs. “Perhaps we could build a few less churches, and instead build some more comfortable houses to live in?” was a question clearly not posed at any stage during the construction process. 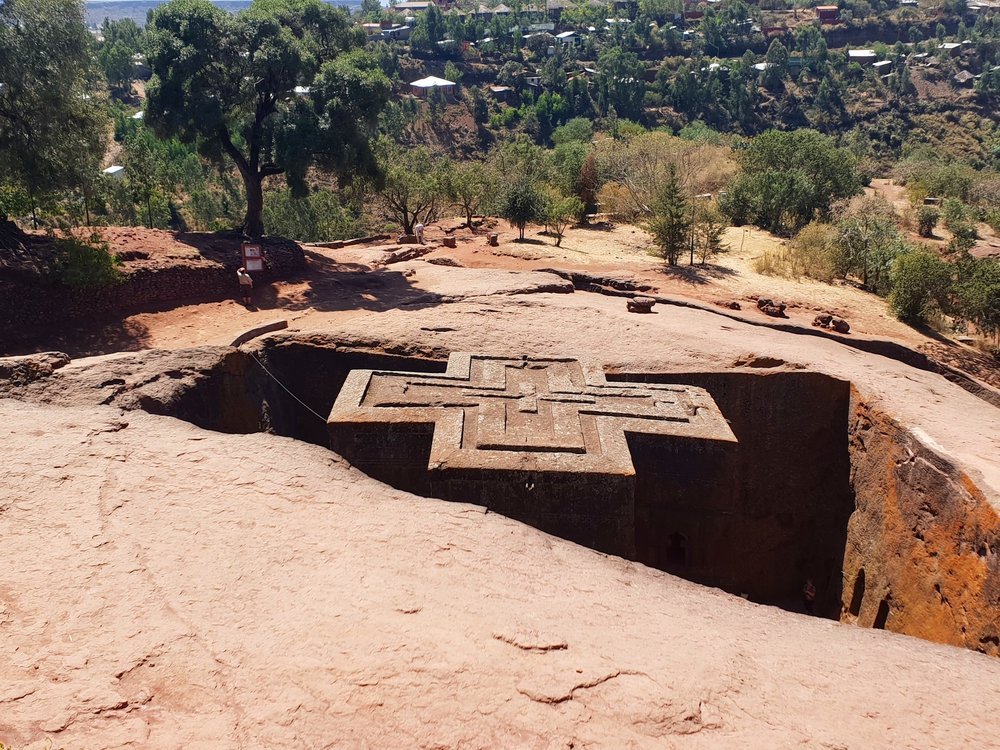 I imagine the people of Lalibela were slightly cross when they were told they would spend the next 25 years digging this church out of the rock.

Despite its Christian roots, Ethiopia is the only African country that was never colonised. Italy failed twice, most recently in the run up to WWII. Emperor Haile Selassie, who ruled Ethiopia between 1930-74, is revered for his role in Ethiopia’s continued independence. For the first three days of the trip, I had erroneously believed that my guide kept referring to the legendary Ethiopian marathon runner Haile Gebrselassie, when discussing the country’s history. But was glad to be corrected eventually, if only because I questioned how he had the time to rule a nation, train for marathons, and give birth to a religion, Rastafarianism. 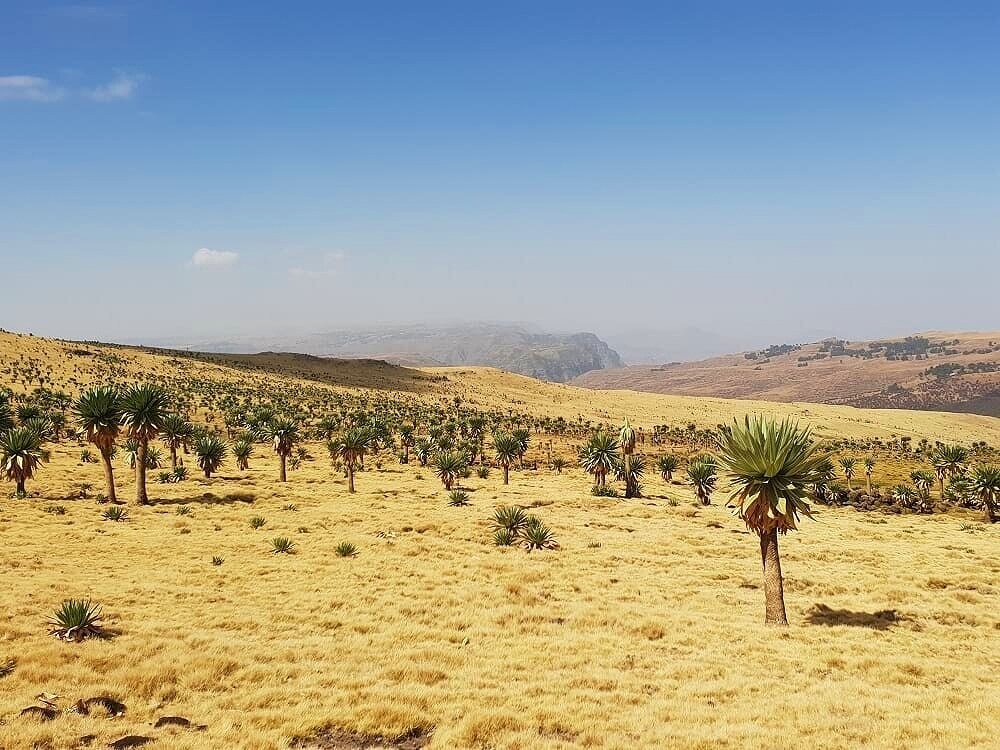 The beautiful Ethiopian highlands. This picture was taken at an altitude of over 3,500m.

As a spoiled Fulham native (in SW London), I like to think I’m well placed to ‘get’ Rastafarianism. As the many traveller patrons of tragic reggae bars in Thailand would also no doubt attest. That said, I didn’t realise Haile Selassie’s huge significance to the Rastafarianism movement, a monotheist interpretation of the Bible with one million followers globally. 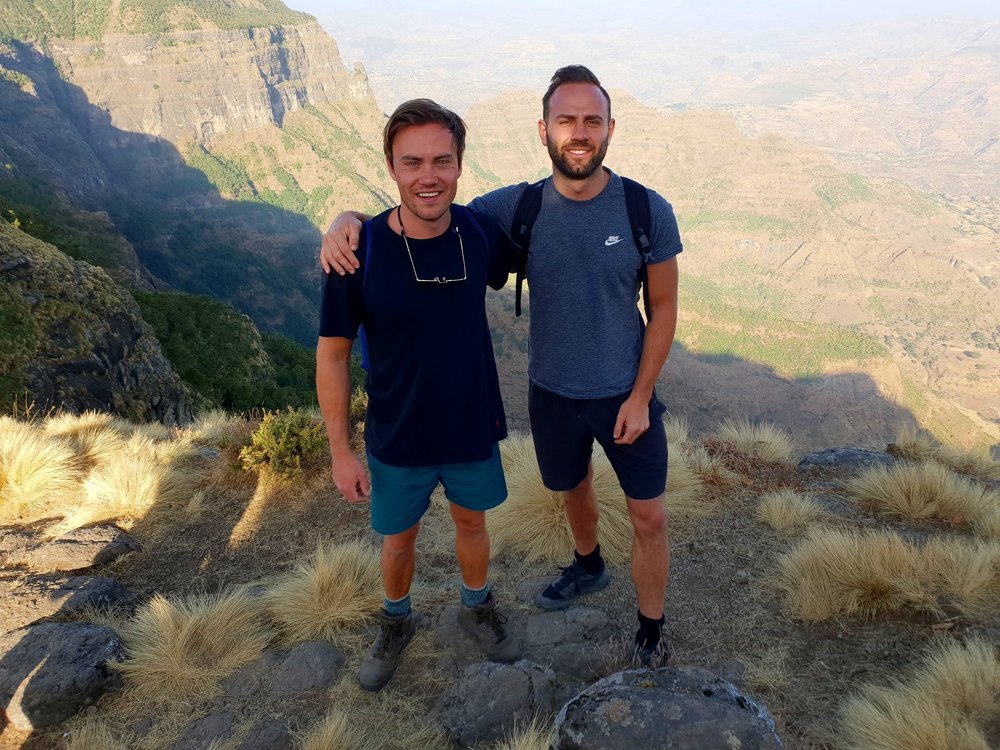 Two human friends stand near large cliff together, in the Simien Mountains.

Rastafarians view Selassie as the incarnation of Jah (God) on Earth, after claims by a Jamaican Christian clergyman that his leadership fulfilled a biblical verse. He didn’t attempt to quash the rumours. “Who am I to disturb this belief?” he once said. Due to Selassie, the colours of the Ethiopian flag are thus the main colours of Rastafarianism. I’m not sure how the worship of Selassie imbues a fondness for marijuana. 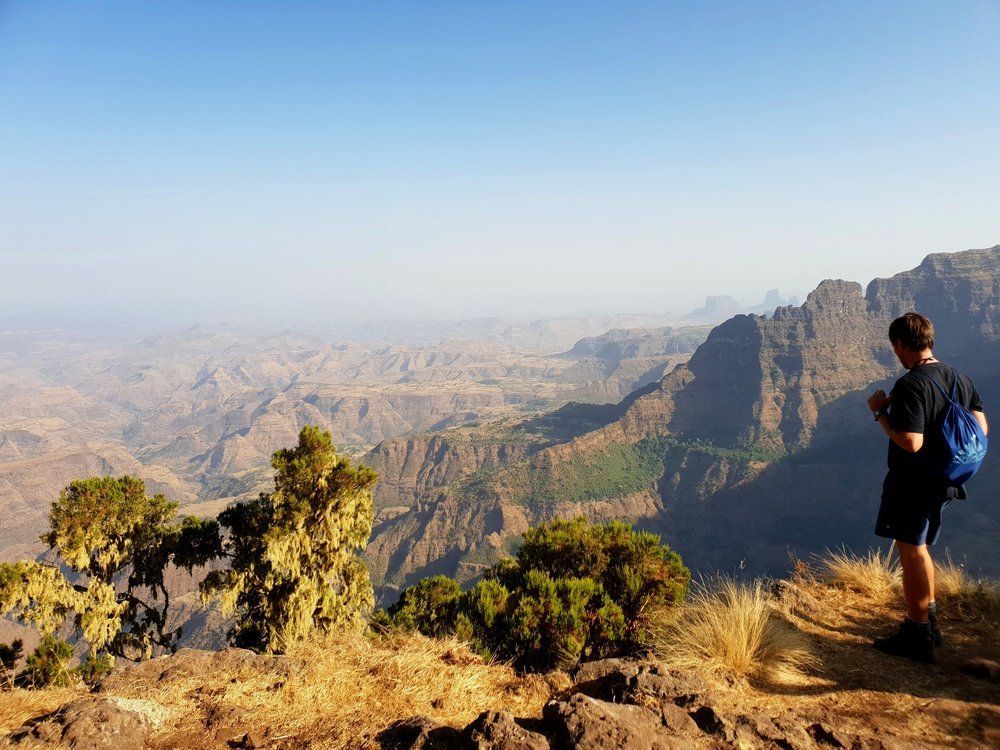 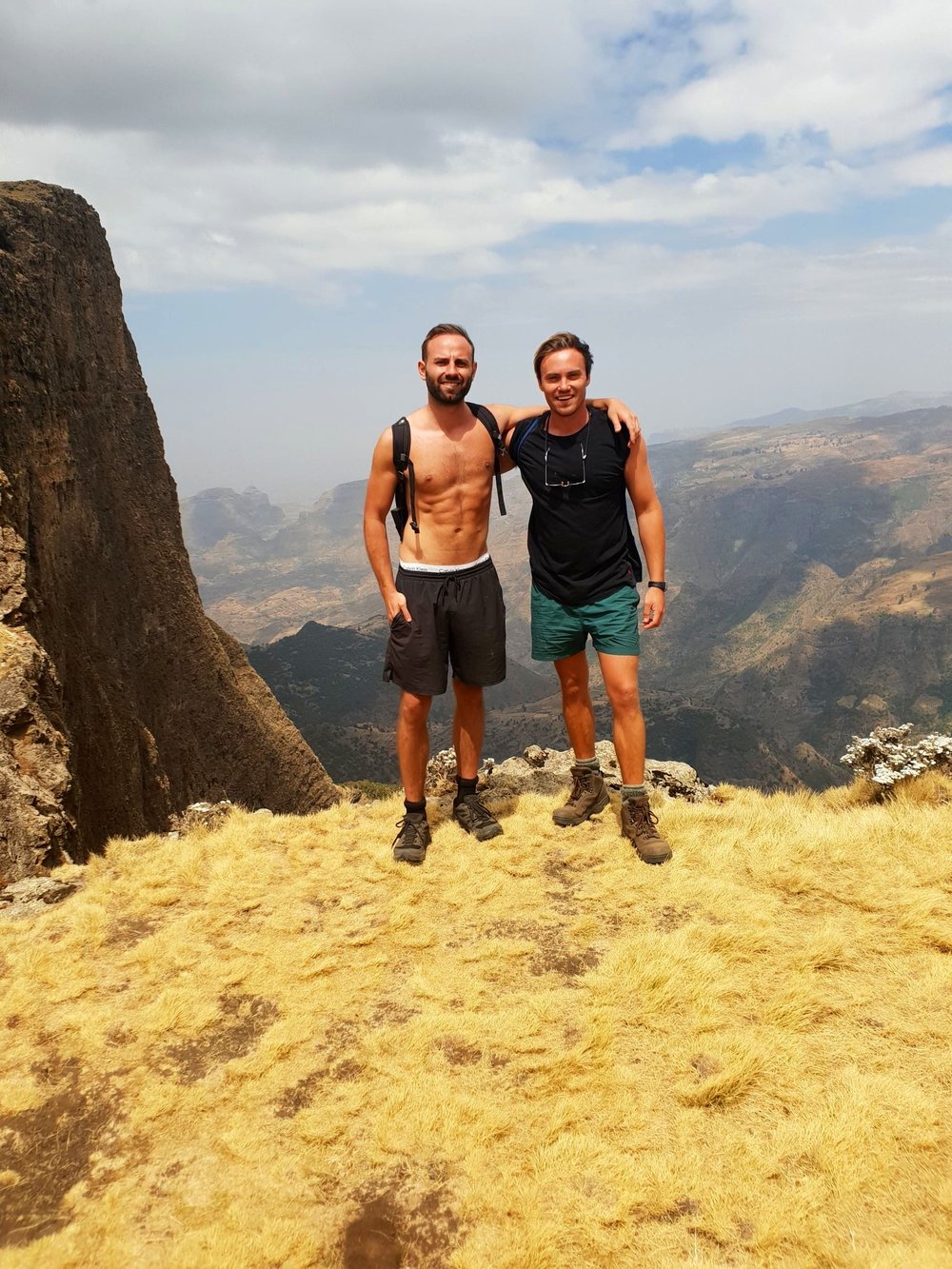 Doing our best to get sunburnt with only a couple of days before our return to London.

Chat and Khat In The Simien Mountains

The Simien Mountains beckoned after Lalibela. The national park is stupendous, and arguably the most beautiful place I have had the privilege to visit. Famed for its gelada baboons, we were more struck by the breathtaking scenery. We trekked and camped for two days, at altitudes of between 3,000-4,000 metres. The scarcity of oxygen did not dampen our spirits. In fact, our energy levels remained undimmed after hours of trekking. The awe-inspiring experience of trekking on the top of colossally high cliffs gave us all the adrenalin we needed to keep going.

Perhaps much more importantly, we were chewing a local plant, called khat (pronounced ‘chat’). Chewing the leaves perhaps coincidentally makes you very chatty. It also makes trekking an absolute breeze. Chomping on the leaves for half an hour was not an entirely enjoyable experience. But the ability to storm up mountains with seemingly boundless energy more than made up for this. Some ten million Ethiopians chew khat regularly, and the legal stimulant is ingrained in the national psyche. Having chewed the plant myself, the sense of urgency (read: recklessness) with which our khat-chewing driver sped around Ethiopia’s roads finally made sense. 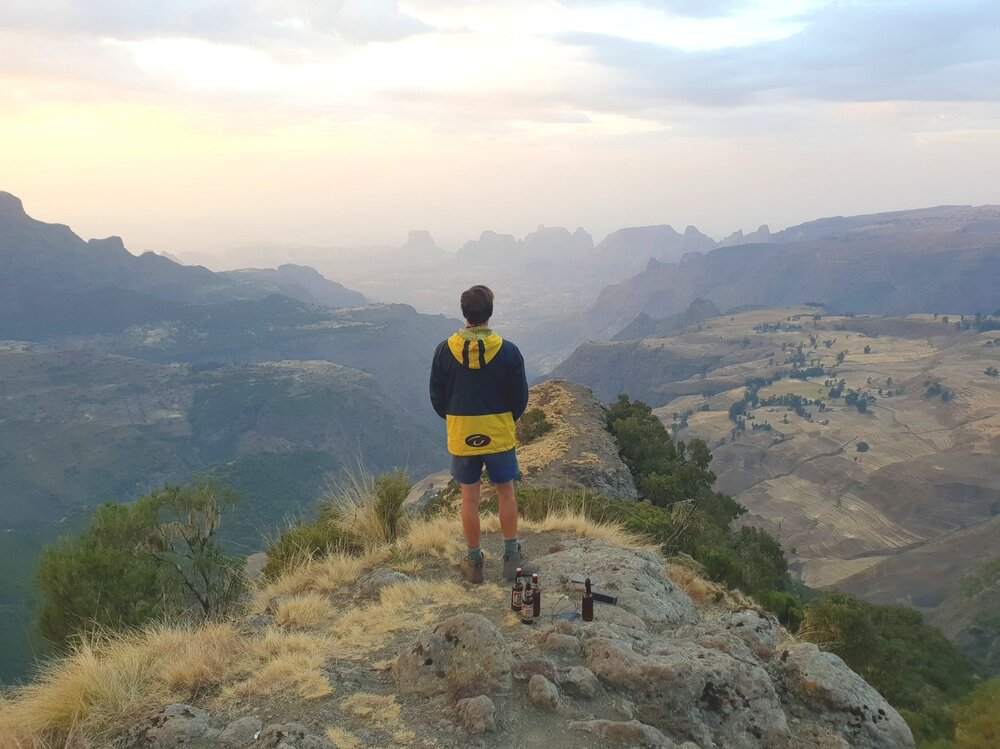 The Castles Of Gondor

I had googled ‘Gondor’ before heading to Ethiopia. Expecting to see a gigantic castle surrounded by battling orcs, I was initially disappointed upon arriving. Once I’d resolved to accept that Lord of the Rings isn’t real, at least outside New Zealand, the castles of Gondar (I later found that there was an ‘a’ in the title, not an ‘o’) were impressive. Dubbed the ‘Camelot’ of Africa, Gondar’s exquisite European-looking castles look decidedly out of place in the dusty surroundings of Ethiopia, having been based upon designs used by Portuguese missionaries. 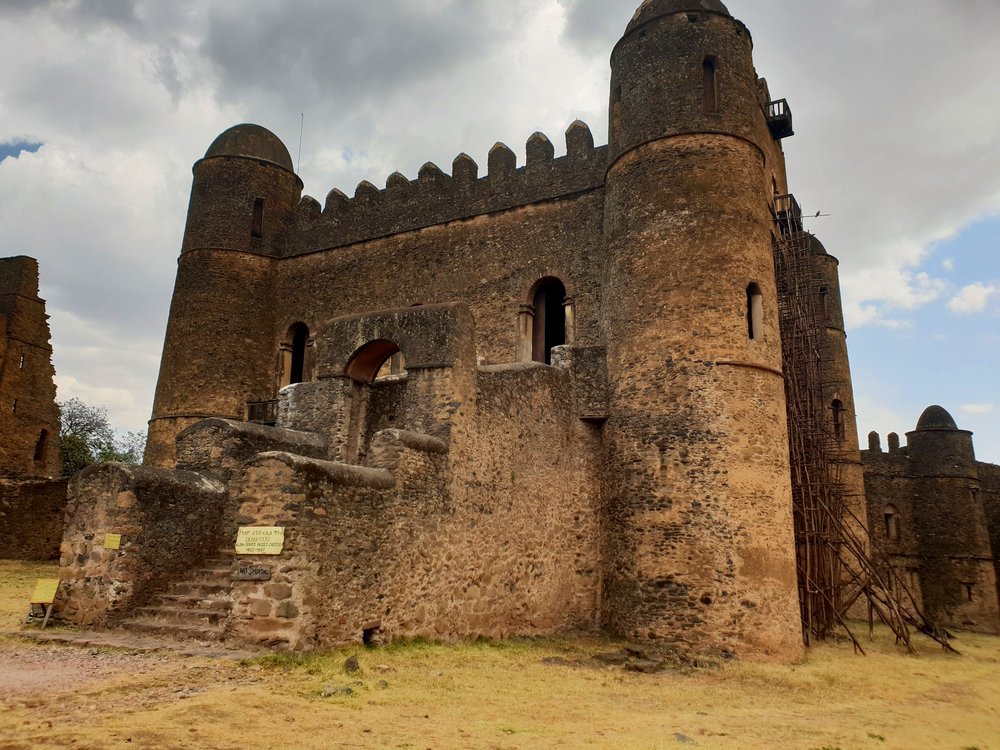 Not an orc in sight.

One of the highlights of our trip to Gondar, and the country more broadly, was the cuisine. As fully paid up members of the liberal metropolitan elite, Alex and I had faced varying degrees of incredulity when we told South African restaurateurs of our preference not to eat dead animals. 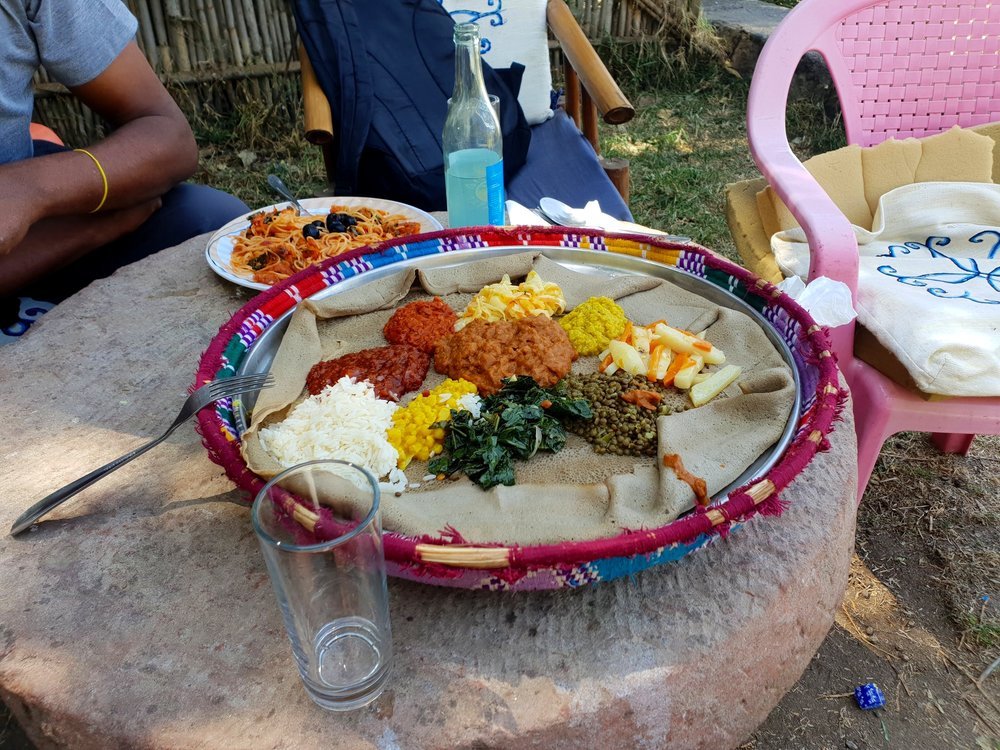 A traditional Ethiopian meal, which is vegan friendly.

Most Christian Ethiopians ‘fast’ for two days per week, adhering to a strict vegan diet, which offered us some respite. The vegetarian food was delicious, a mix of Middle Eastern vegetables and spices, with East African influences. Injera bread was served with a variety of accompanying curries and vegetables, in a dish called Yetsom Beyaynetu. Our guide told us this literally meant “assorted dish”, inventively. The food was as tasty as it was tough on the stomach: very. 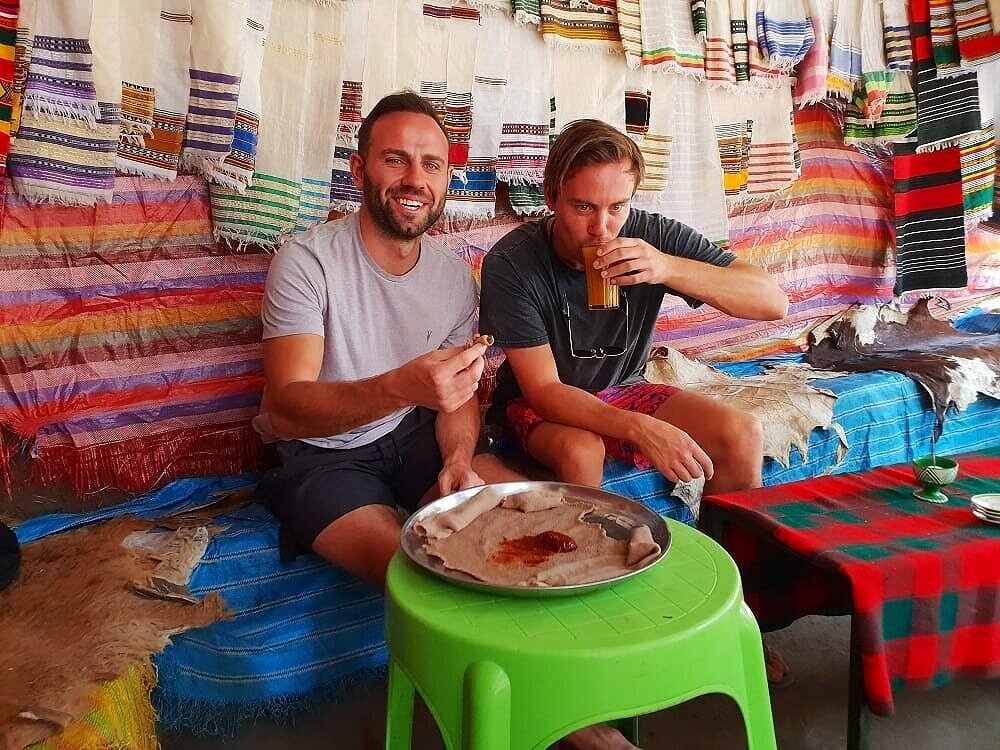 We never got bored of injera bread.

We left Ethiopia with the sense that the country is moving in the right direction. Tourist numbers have increased from around 100,000 annually just 15 years ago, to over one million today. This number will surely rise due to the country’s proximity to Europe and growing prominence on the African stage. One hopes that the absolutely tragic air crash in the country in early 2019 does not act as a deterrent for future visitors. That said, Ethiopia remains poor. GDP per capita is just US$2,500, compared to around US$40,000 in the UK. For context, the GDP of the one billion people living in Africa is smaller than Spain, which has a population of just 42 million. 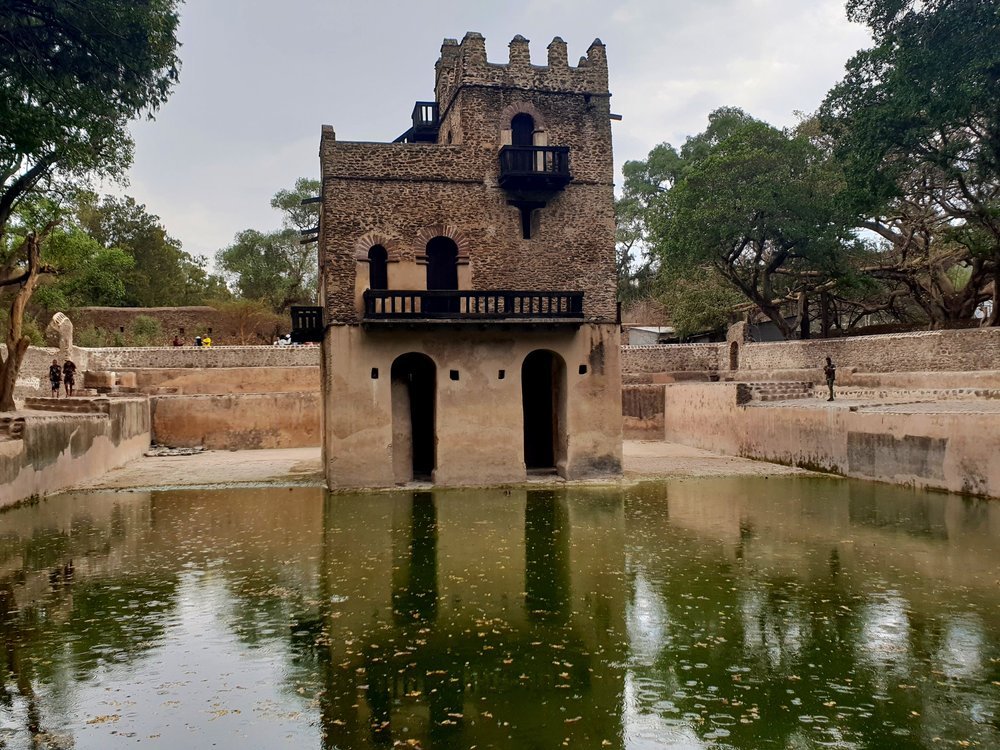 A castle-like structure sat in a partially flooded basin.

Ethiopia is far more stable than its neighbours, Eritrea, South Sudan, Djibouti, and Somalia (although as neighbours these are about as dysfunctional as one could imagine). With Chinese investment flooding, I am hopeful that this truly remarkable country continues to head in the right direction.

Previous Post: Bhutan – The Land Of The Thunder Dragon