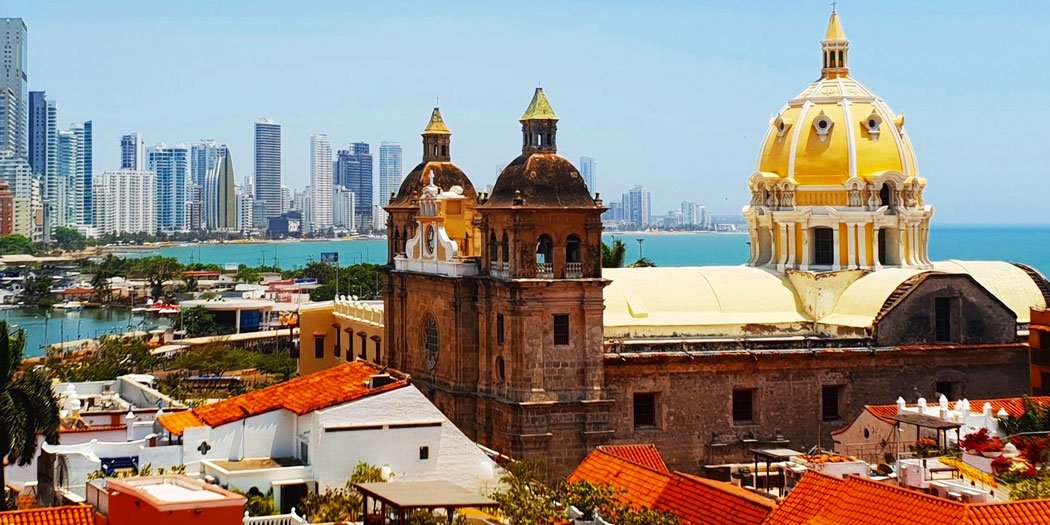 Country #51. I loved Colombia so much after a visit in 2015 that I felt I had to return. Also, my proposed road trip to the Deep South of the USA was vetoed by my friends, the umpteenth time that a democratic voting system has not worked in my favour in recent years. Fortunately, the trip happened months later. In a similarly shocking democratic upset, 50.2% of Colombians voted ‘against’ a peace deal with the Revolutionary Armed Forces of Colombia (FARC) guerrillas in 2016. A vote ‘for’ would have ended an armed conflict which began in 1964. Despite the vote, FARC fortunately disarmed in 2017. And crucially, I still had a nice holiday. Maybe democracy isn’t broken after all. 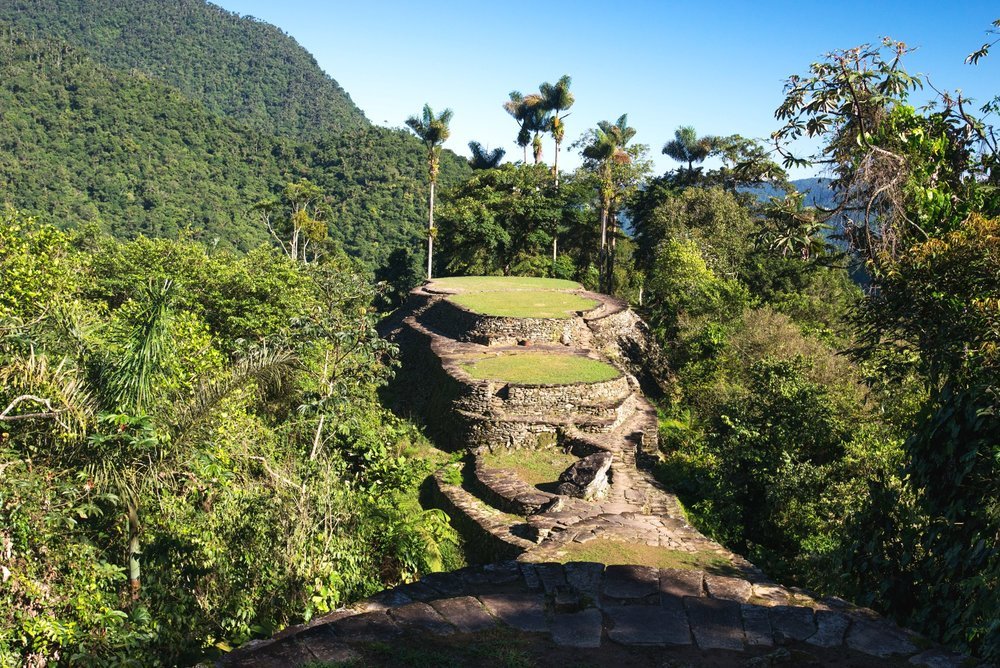 There are few countries in the world which offer as much as Colombia. From the pristine Caribbean beaches of its northern coast, to the vibrant streets of Medellin, and trekking to the country’s ancient ‘Lost City’, Colombia packs a punch. And given how cheap domestic air travel is, it can all be seen in a relatively short space of time. 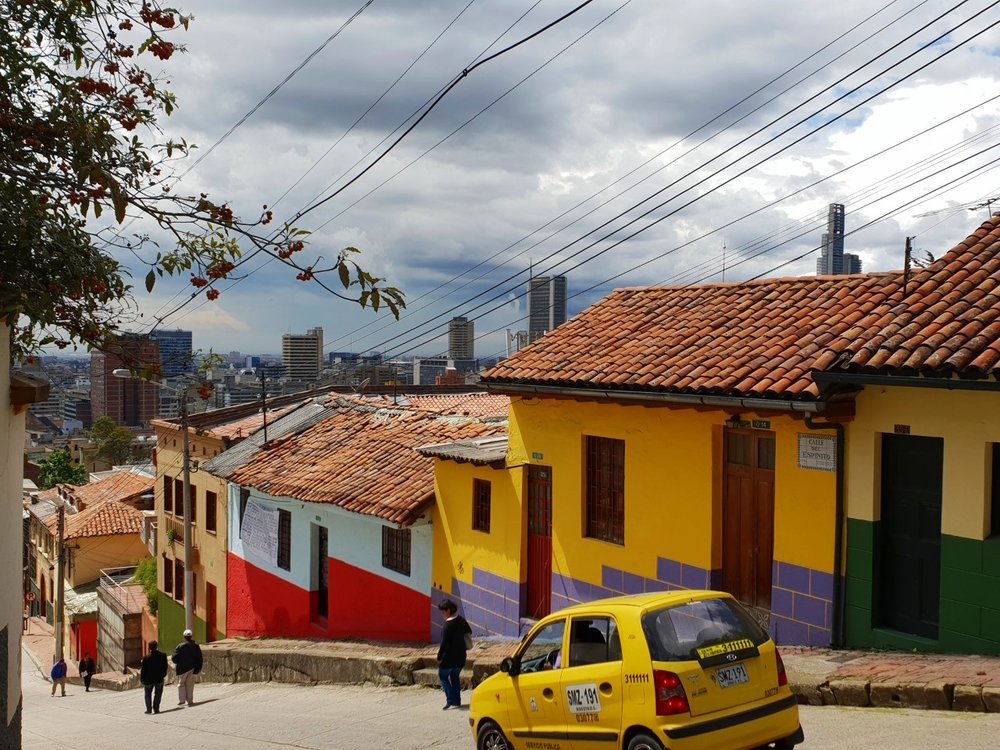 If you can ignore the fact that the city’s name has ‘bog’ in the title, colourful Bogota is impressive.

A trip to Colombia would perhaps have raised eyebrows a few years ago. But the country’s transformation has been rapid. Neighbouring Venezuela would have been seen as a safer, more developed destination than Colombia not so long ago. Indeed in 1950, Venezuela was the fourth wealthiest country in the world in GDP per capita terms, making its recent demise even more stunning. That hundreds of thousands of Venezuelans tragically sit at the border, hoping to escape to Colombia, is testament to both countries’ changing fortunes. Although in Venezuela’s case, it’s also testament to what happens when extreme political dogma takes precedence over the lives of a country’s citizens. Fortunately for the world, base-level dogmatic politics doesn’t appear to be taking hold on either the left or the right anywhere that I can see (sigh). 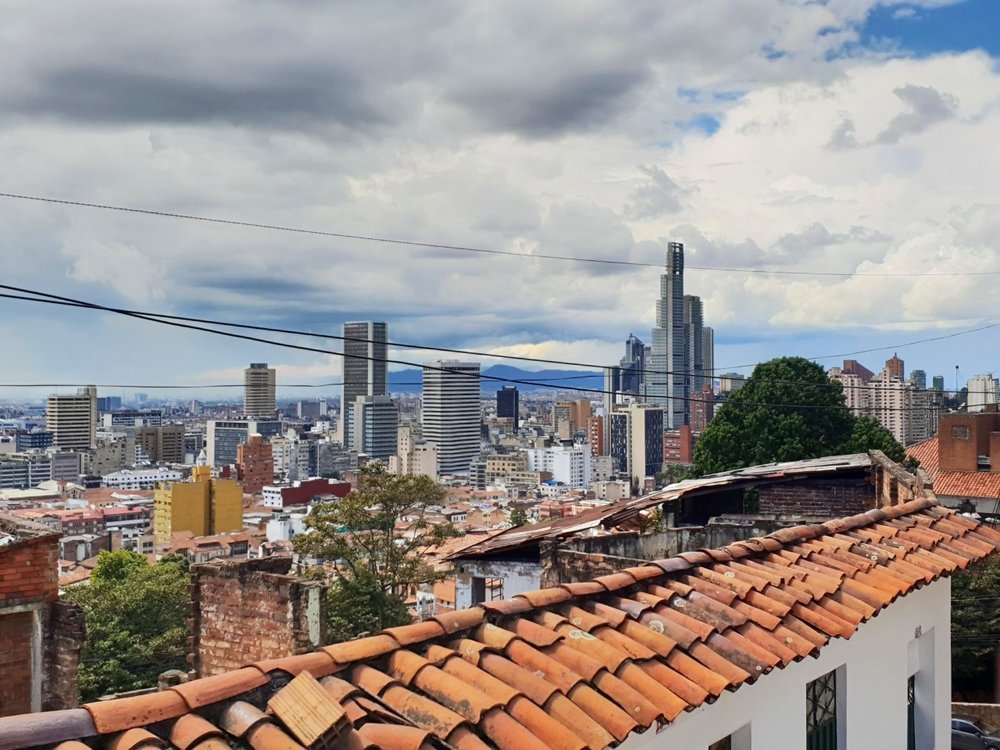 Bogota’s burgeoning skyline. For bored people who for some reason waste hours of their life browsing skyscraper forums, like myself, it was a feast for the eyes.

Our first stop was Medellin. It’s a fast-paced, chaotic, and enchanting city. Set in a dramatic, incredibly humid, valley at over 1,500 metres, it’s not an ideal place to find yourself traipsing around after a night out. Which is unfortunate, as the nightlife in Medellin is one of the city’s’ main attractions. Medellin used to be one of the least safe cities to visit on the continent, during the informal rule of the infamous drug baron Pablo Escobar. Since his death in 1993, the city’s fortunes have improved rapidly. In two separate trips to Medellin, I never felt unsafe. The local people are incredibly friendly. Being able to dance appears to run in their DNA. Just as two-stepping awkwardly at the side of a dance floor, trying not to make eye contact with anyone, seems to be a crippling trait of anyone with Anglo-Saxon heritage. Or at least myself. 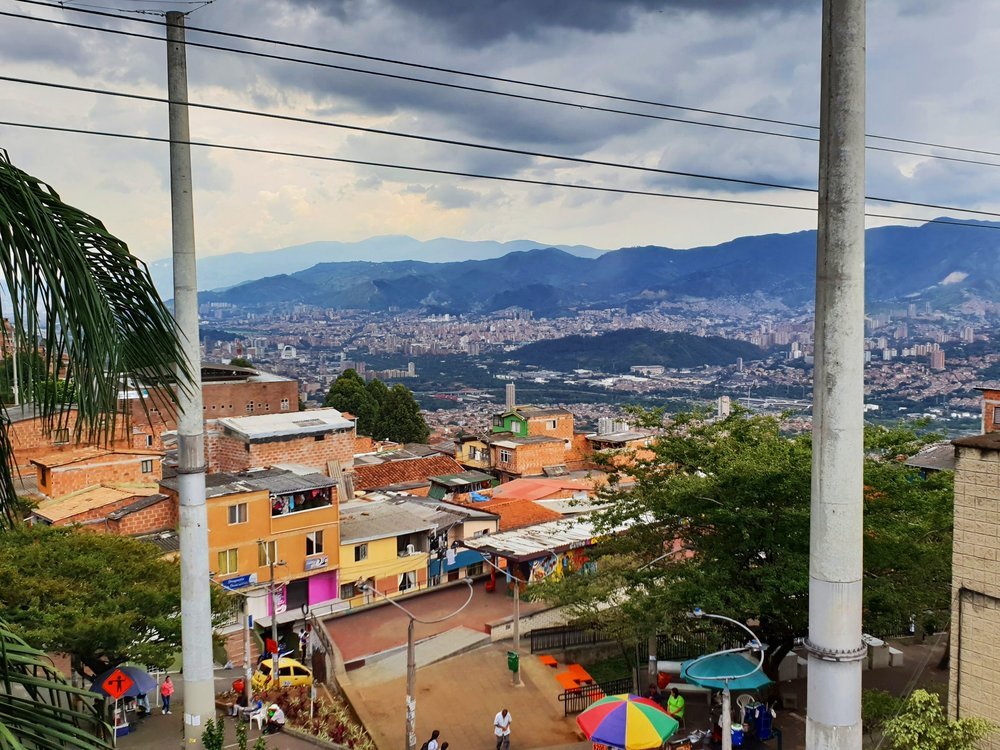 As intrepid travellers, we ventured into the barrios of Medellin… in a concealed cable car, before finding refuge in a rooftop bar, where this picture was taken.

One of the highlights of any trip to Medellin is to the barrios. A funicular takes you from the bottom of the city’s valleys and gives you spectacular views of the sprawling metropolis. A walking tour of the city will also show you a heady mix of crumbling Spanish colonial architecture and abundant street art (if you read the Guardian) or graffiti (Daily Mail).

While Medellin is certainly more popular with tourists at the moment, I would advise anyone flying through the capital Bogota (where most international flights arrive) not to jet off again straight away. While Bogota is not necessarily a pretty city, its location is equally stunning. It sits at almost 2,700 metres and is overlooked by the Eastern Cordillera of the Andes, which limits city growth abruptly. Visible from almost anywhere in the city, the lush mountains loom large over the city’s charming old town and booming financial district, complete with gleaming new glass skyscrapers piercing the sky. I’ll warn you, however, it’s cold here for most of the year. And with eight million residents, it’s not a relaxing place to spend time. 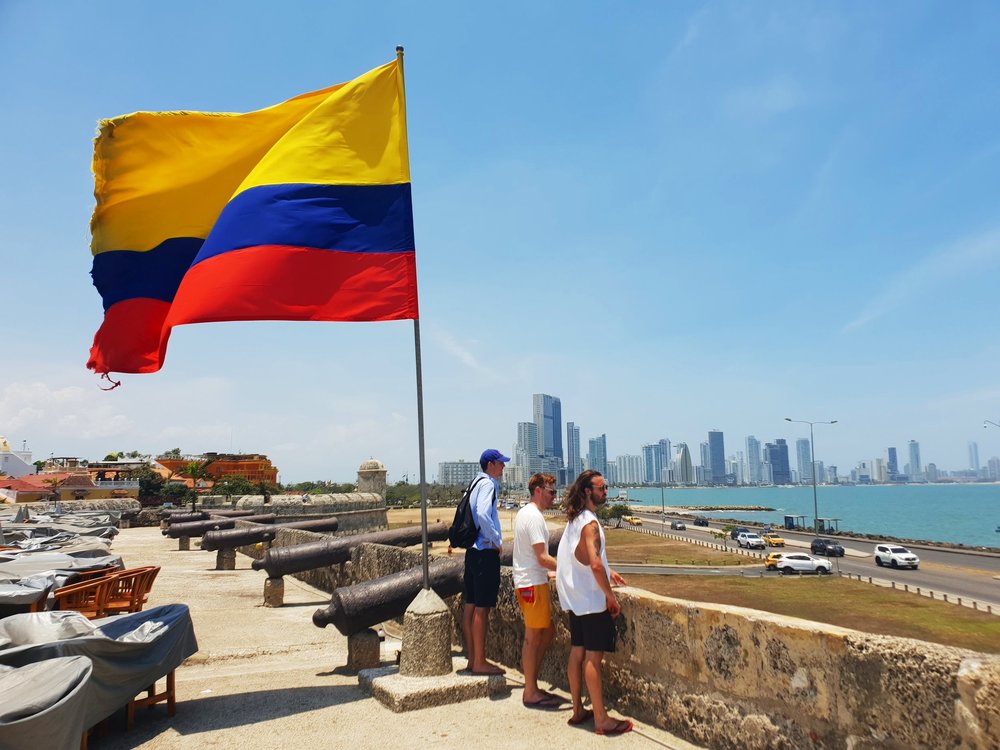 The fortified walls of Cartagena, with three other humans who I like to stand near and make noises at regularly (aka ‘friends’). 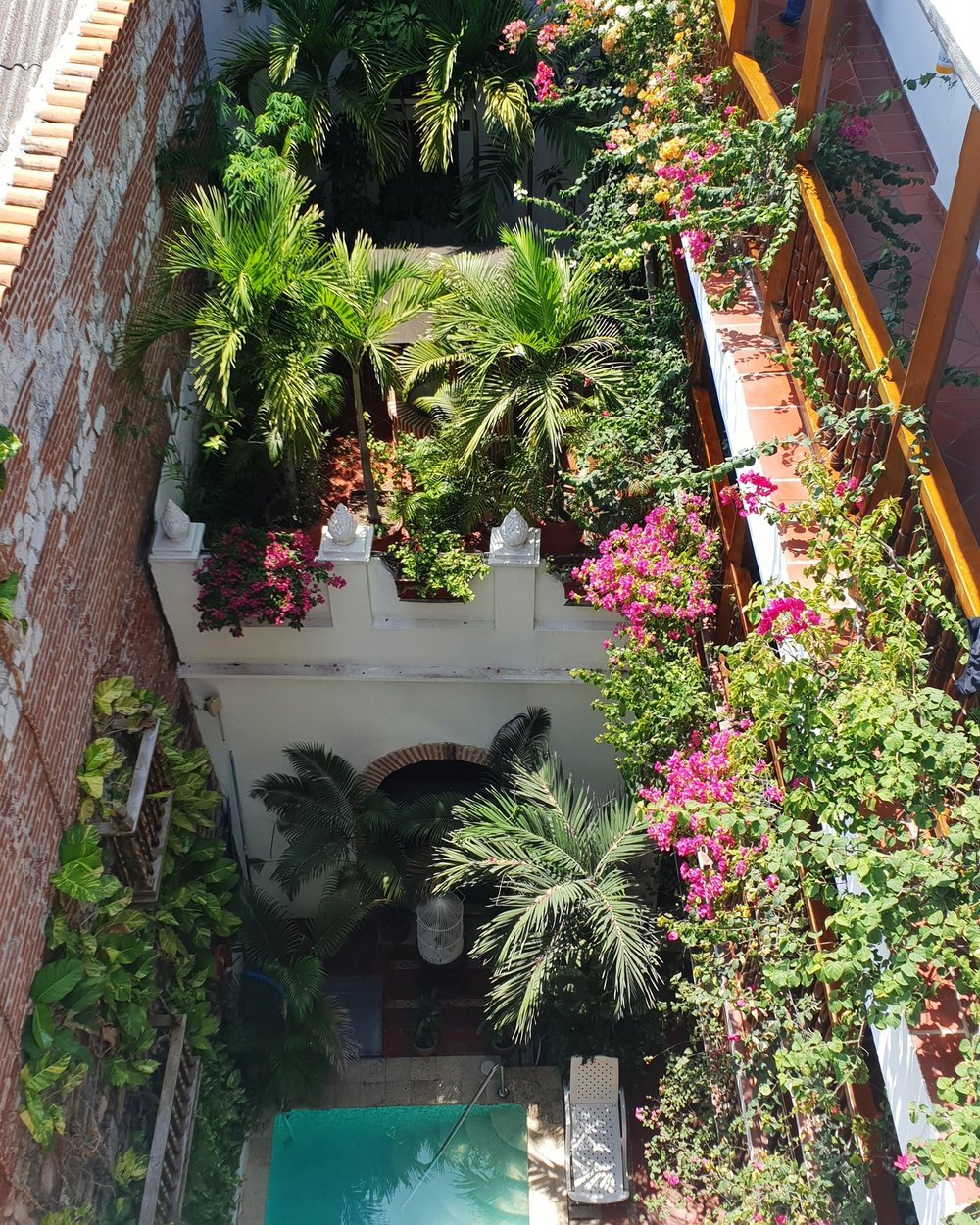 Cartagena is famous for its colourful courtyards, as well as its rooftop bars.

The old Spanish colonial walled city of Cartagena was our next destination. Beautifully colourful and vibrant, and set against a backdrop of crystal-clear Caribbean waters, it’s a picture postcard of a city. Or a nice screensaver or Instagram photo, for the millennials or Gen Z’ers among you. You can spend days strolling through the old town’s crumbling alleys. We did. Ceviche, the raw fish local delicacy is to die for (obviously not literally, for the human at least). Did I mention I’m a vegetarian? Because like most of us, I don’t like to bring it up or be sanctimonious about it. Except just then, and whenever I am attempting to highlight my woke credentials to hipsters in a doomed attempt to fit in.

You can also go island hopping to Playa Blanca and Isla Baru from the city, as well as Casa en el Agua. As the very literal name suggests, it’s effectively a large house in the sea. For a night or two, it’s an excellent experience. The highlight was nighttime snorkelling with luminous plankton under the stars. Although it did end up with me being kicked into the sea after a long argument about the illusion of free will, which I have since written a long post about. 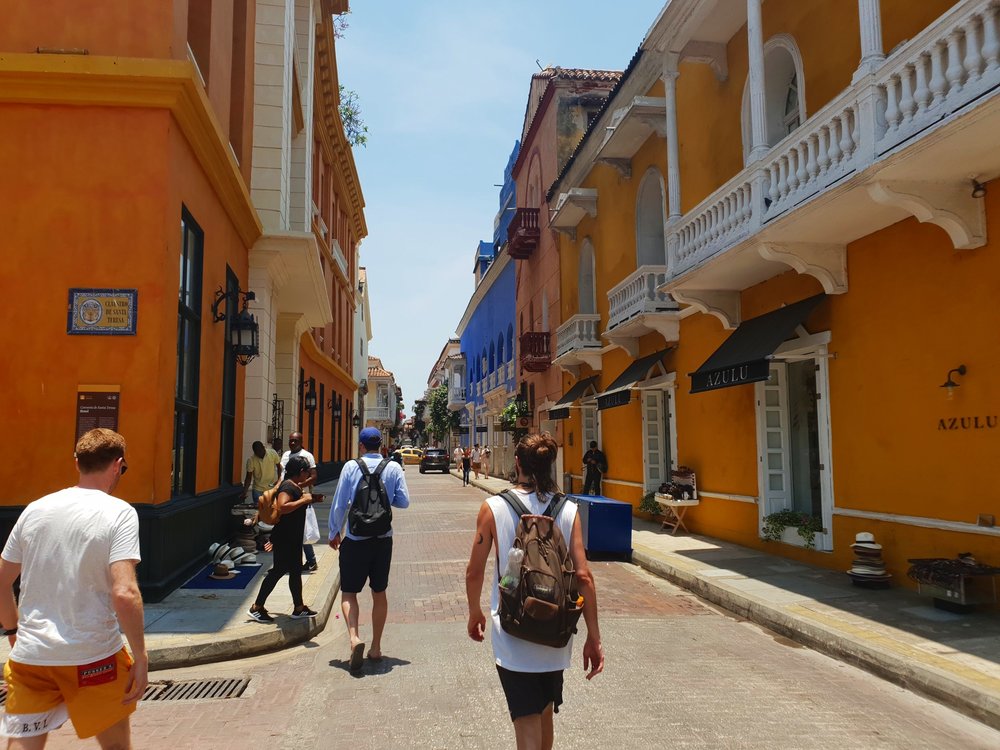 My friend Angus (left) wore orange shorts and died his hair in an attempt to blend in with the surrounding buildings.

The one slight downside is that once the boat drops you at the hostel, you’re stuck with the same people for 24 hours. When we arrived, a Dutch man realised there were women on board. He immediately began doing press-ups. Realising this wasn’t having the desired effect, he then started squatting vigorously, with a friend on his shoulders. Needless to say, his conversational skills were only slighter better than his woeful grasp of even basic social etiquette in group situations. Alas, he was unavoidable for the next day. 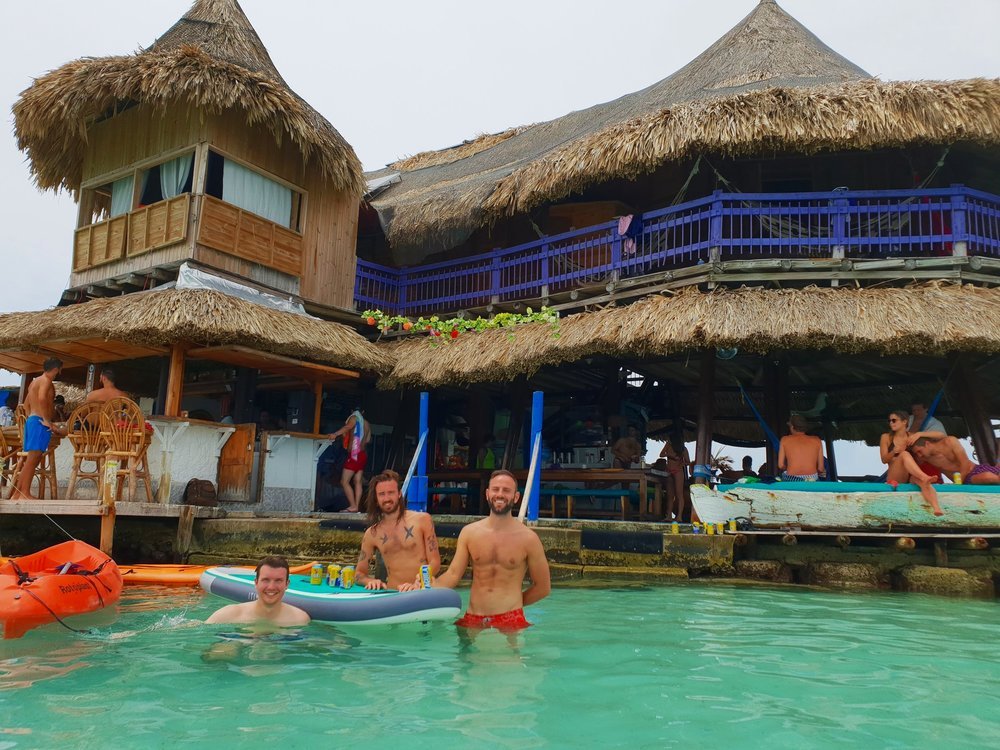 Casa en el Agua. Nice ocean views, great food… and some questionable guests? I’m talking about the previously mentioned Dutch man, despite my friends and I being the main focus of this photo. To be sure, we think we are great.

One of the highlights on any trip to Colombia is the infamous ‘Lost City Trek’. Set over three days, the arduous physical challenge takes you through dense rainforests, before you emerge at the stunning Cuidad Perdida. It is believed to have been built by the Tairona population in CE800. (‘Common Era’ or CE is an alternative for using AD by the way, for those who have doubts over the magic baby’s existence and birth.) The Lost City Trek is becoming an alternative to the infamous ‘Inca Trail’ to Machu Picchu in Peru. I visited Machu Picchu in 2011. It was completely packed with tourists, something I moaned about incessantly with no sense of irony all day, despite clearly being one myself.

It’s hard to find words that can describe the Lost City Trek. But “sublime”, “enchanting”, and “wondrous” are all appropriate. The perceptive among you may have just asked yourself why there are quotation marks around those adjectives. Well, the truth is that we didn’t actually do the Lost City Trek. My friend Paddy did, and I’ve stolen (with his blessing) his description of his experience. We had visited the nearby Tayrona National Park a few years previously, and also the food in Cartagena was too nice. So we opted to live vicariously through him, choosing to hear about the trek rather than actually doing it. Hearing about how much it rained on the trek engendered no sense of schadenfreude whatsoever. 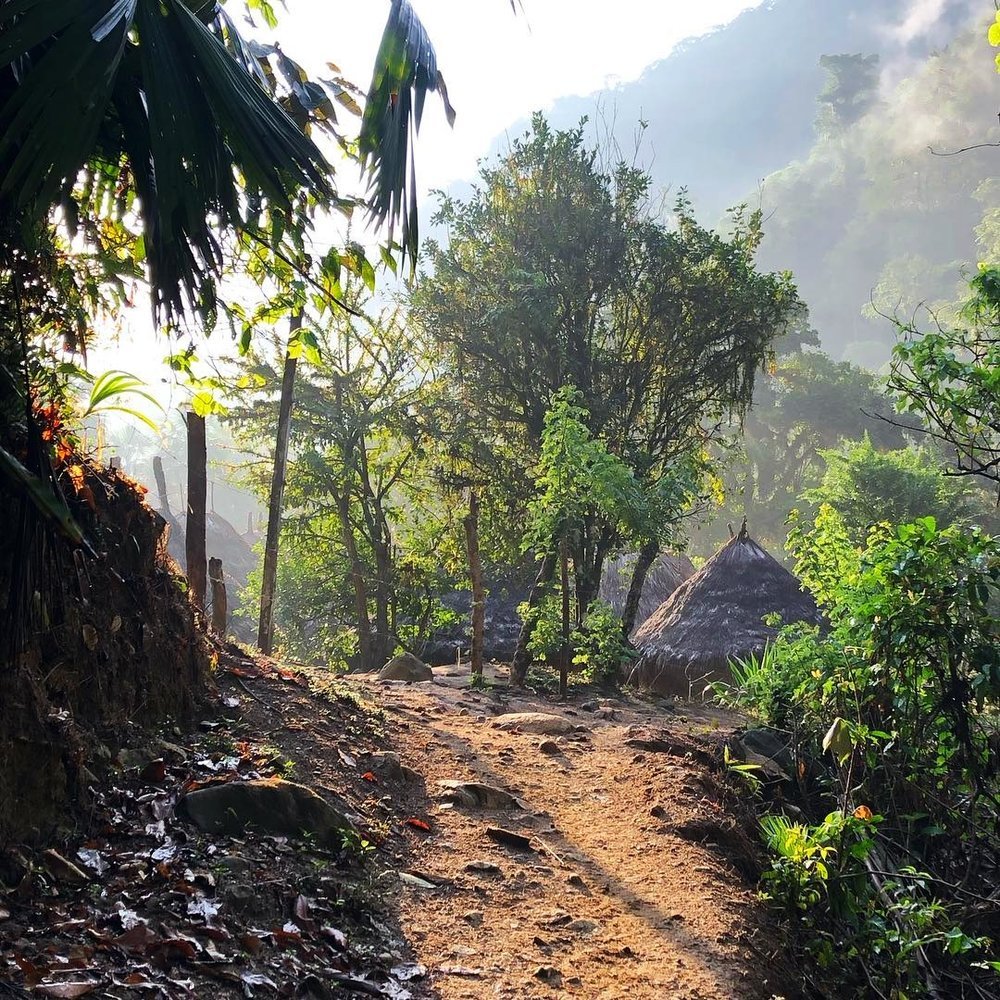 One of the many stunning views on the Lost City Trek, which we didn’t see… 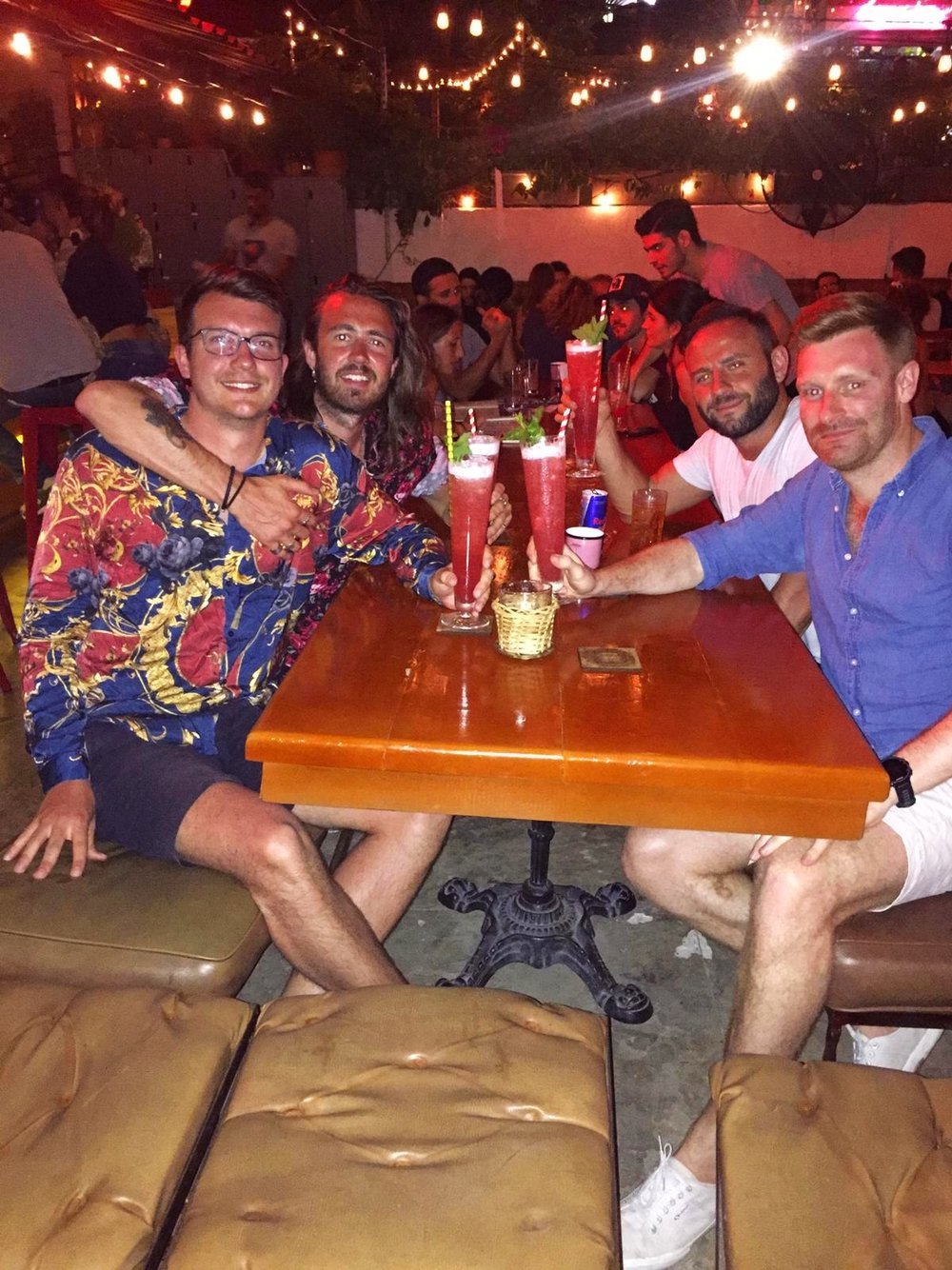 …because we were enjoying some equally stunning cold beverages in the many rooftop bars of Cartagena.

Tayrona, incidentally, has one of the most beautiful stretches of beach that I’ve ever seen. The government sensibly prevented development on it. To reach the beaches, you have to arrive early and trek for two hours (this is a trek we did actually do by the way). The only accommodation available is to sleep in a hammock on a beach, an experience which is overwhelmingly less romantic in practice than it sounds on paper. But the result is an untouched stretch of sand, where the lush rainforest tips into the turquoise seas below. 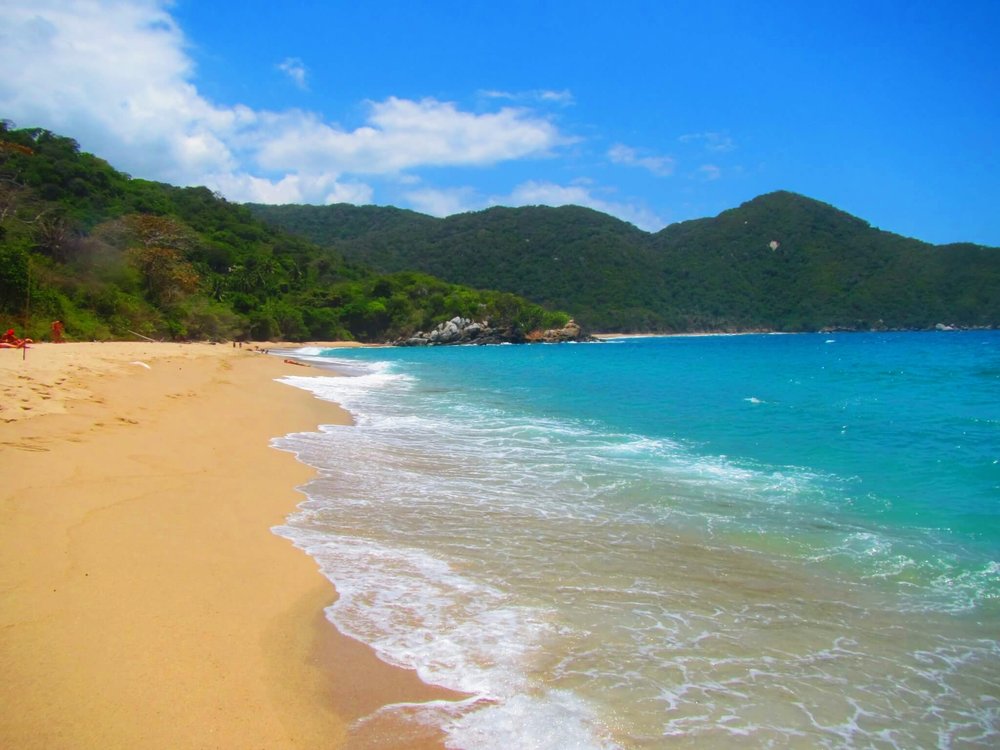 The picturesque beaches of Tayrona National Park. This is the alleged nudist part of the beach.

For the naturalists among you, you’ll be delighted to hear that there is a nudist beach at Tayrona. A traffic cone delineated where the nudist beach started and the normal beach ended. A man wearing a high visibility jacket stood on the border. Whenever anyone crossed the line, he blew the whistle repeatedly until they took their clothes off. It was a ruthlessly efficient system. On reflection, however, it wasn’t abundantly clear that the man was employed by the national park in any official capacity whatsoever. Or that it was even an official nudist beach. A chilling reminder that most humans will immediately obey anyone who had the foresight to purchase a high-vis jacket, even if it means taking your clothes off.

Next Post: USA – A Sweaty Sojourn Through The Deep South