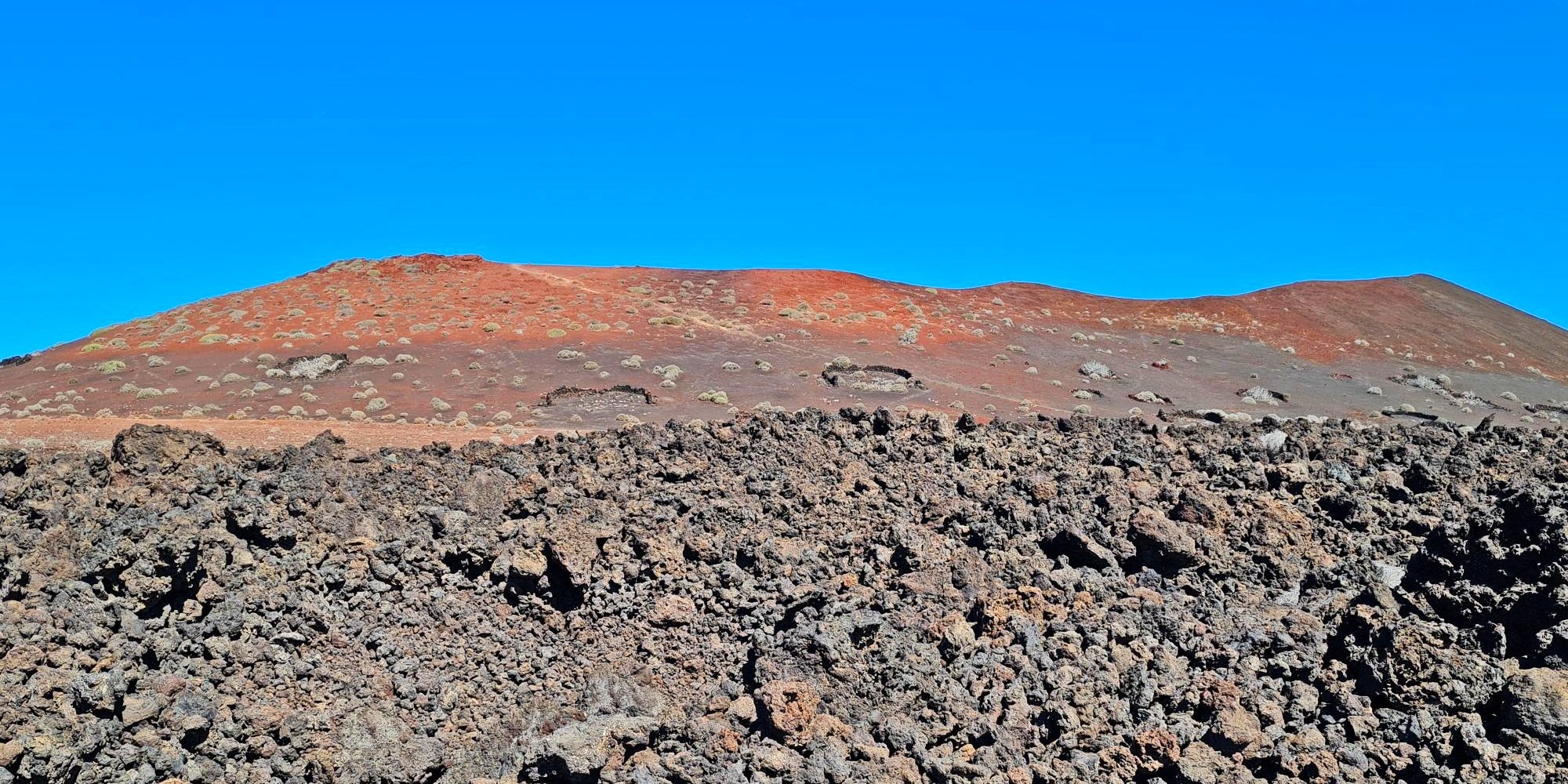 The Canary Islands – Not Terrible, Surprisingly

What springs to mind when you think of Lanzarote or Tenerife? For me, it was Brits abroad. Package holidays. Fish and chips, and mushy peas on the beach. Tacky Irish pubs. Packed sun loungers. And a few judgmental tourists (like me) tutting and making mental lists about the things I dislike about the area. 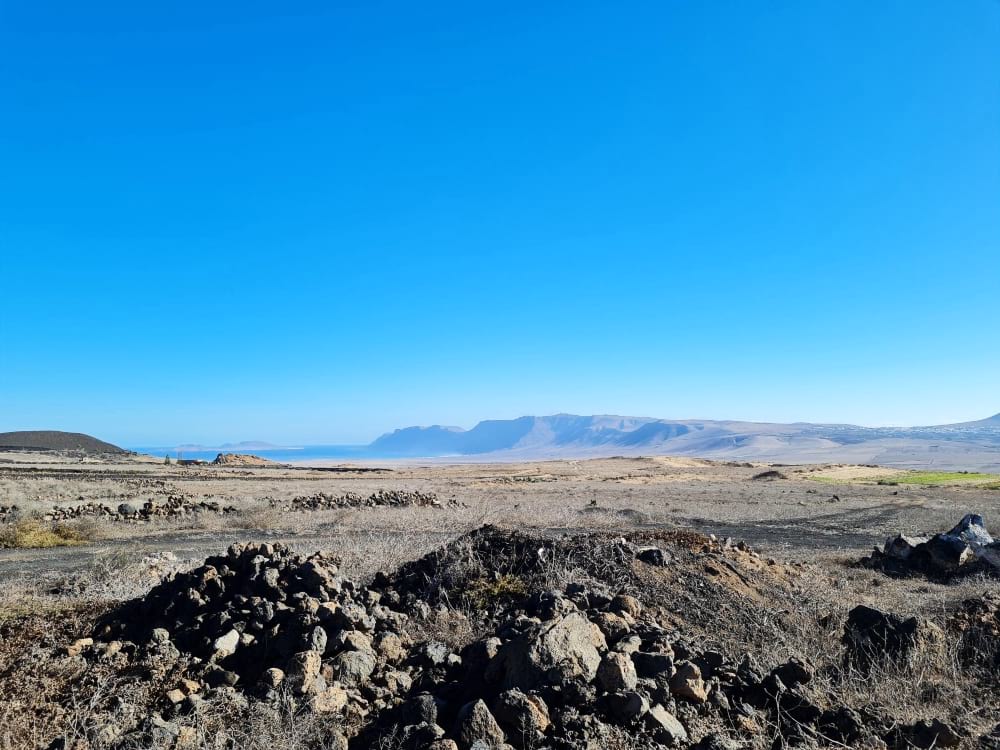 The otherworldly landscapes of Lanzarote, Spain.

It was with this scepticism that I booked flights to Lanzarote with my partner Sophie. Covid-19 continued to limit the options of places to travel. This, and in terms of new places to go in the world,  I was starting to run out. So with this in mind, I somberly boarded the flight, and sat sulking for three hours as we flew down to Lanzarote, a part of Spain conspicuous for being a thousand miles from the mainland and just off the coast of Western Sahara. (By the way, I’m not that much of a prima donna that I sulked on the way to a holiday; hyperbole makes articles more entertaining to read). 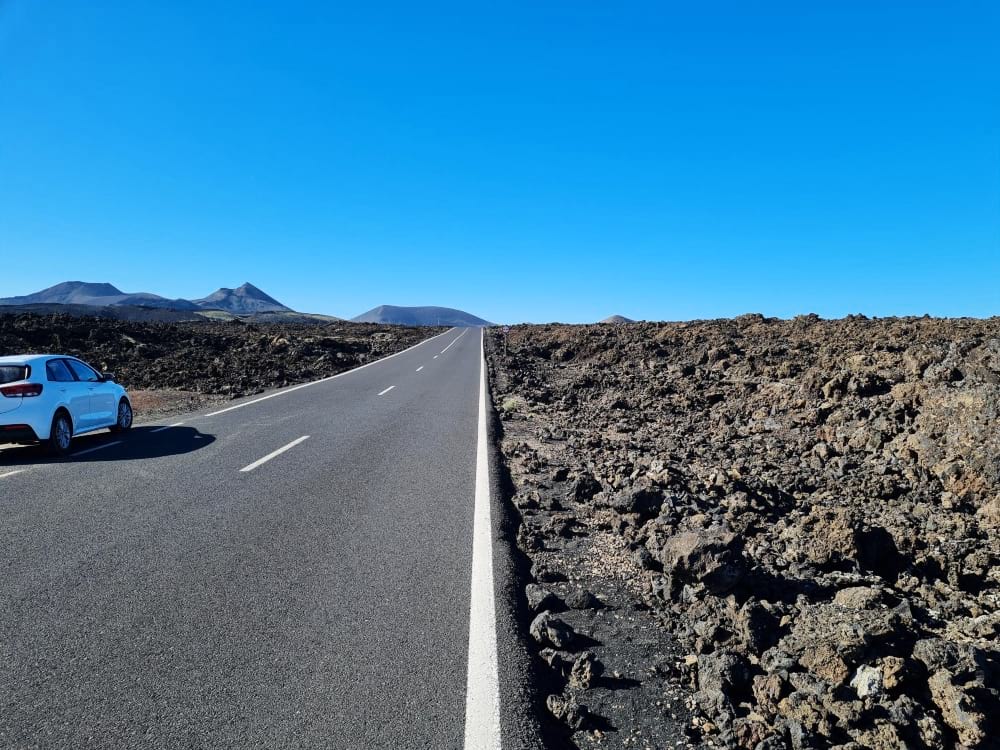 A road trip through lava flows.

We touched down at the airport. And at first, all of my worst fears appeared to be true. We seemed to be the only non-package holidaymakers on the entire flight. As we left the airport, people were funnelled into the back of coaches taking them to their all-inclusive resorts, where they’d (presumably) stay for the remainder of their trip. Arrecife, the capital, is absolutely nothing to write home about, and only warrants a mention here because it backed up my stereotyped view of what the island would be like: overdeveloped and lacking any real character. 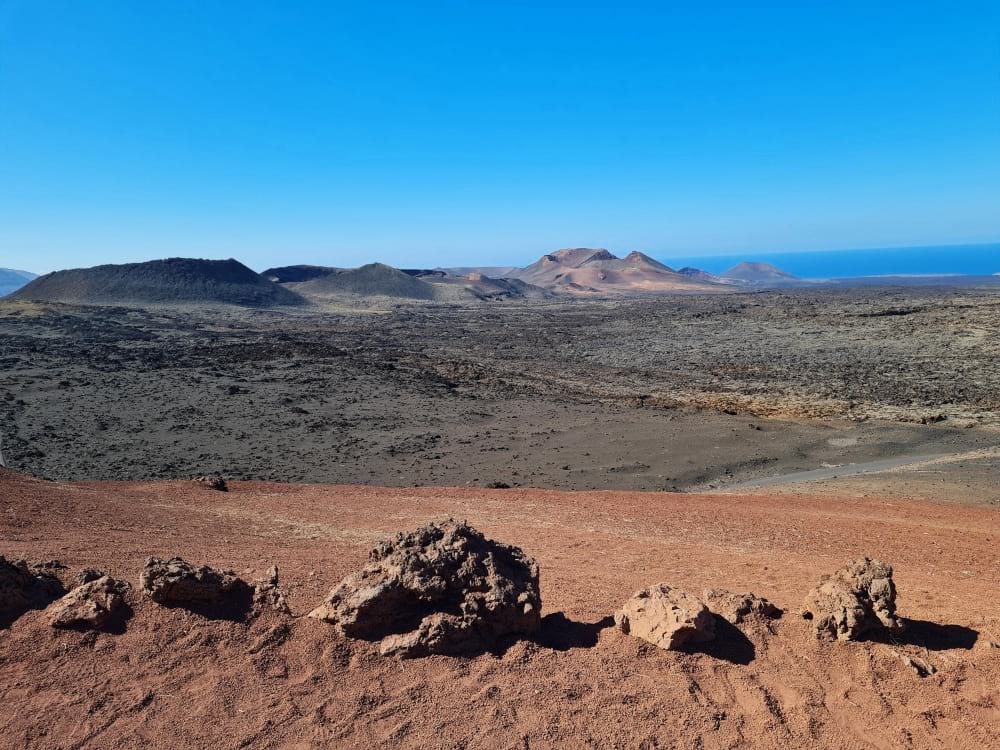 But then, as we took the seemingly bold decision to rent a car and leave the capital, something amazing started to happen. The landscapes, slowly but surely, started to become more interesting. Black lava flows seeped up onto the sides of the road. Menacing volcanoes peppered the horizon. Lunar craters abounded. Coupled with the red earth, it was hard to feel like we’d not landed on Mars. It was breathtaking, in a kind of desolate way. Like a miniature slice of San Pedro de Atacama, in Chile, had found its way across the Atlantic Ocean. 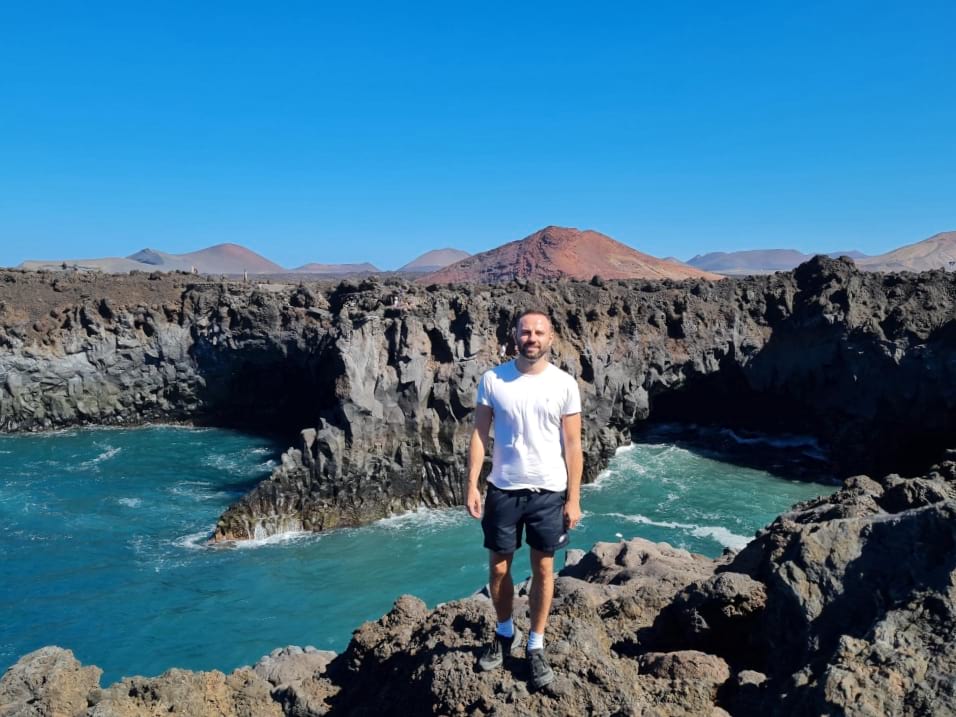 Trying my best not to fall in the ocean.

We stayed in an AirBnb, near Tao, right in the middle of the desert. Like much of the architecture here, the building was really quite special. Due to famed architect Cesar Manrique (famed on this island at least), the island has been transformed, with buildings built to reflect and be at one with nature. So they’re often built with the volcanic rock found all over the island, harnessing lava forms, and using pristine white lime. It looked like a set from Tatooine in Star Wars, or something you’d more likely see in Marrakech. “Lanzagrotty” this wasn’t. 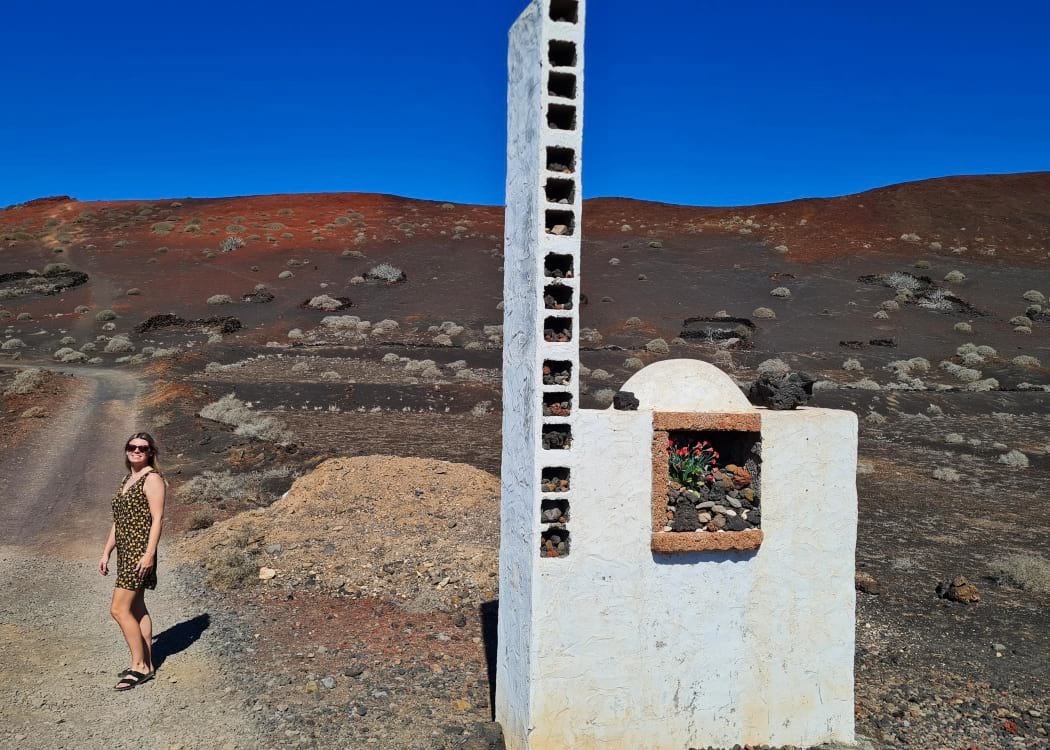 Sophie, stood next to some sort of lunar communication device.

We spent the next few days exploring the island. We took a drive around the Timanfaya National Park. It’s an area so otherworldly that it has often been used as a film set for movies set on Mars. We then pushed onto the stunning coastlines at El Golfo, which while lacking an actual Golf Course, made up for this by having lava cliffs that had solidified when flowing into the sea. Later journeys to the Table Mountain-esque Playa de Famara followed, which had landscapes on a truly epic scale. 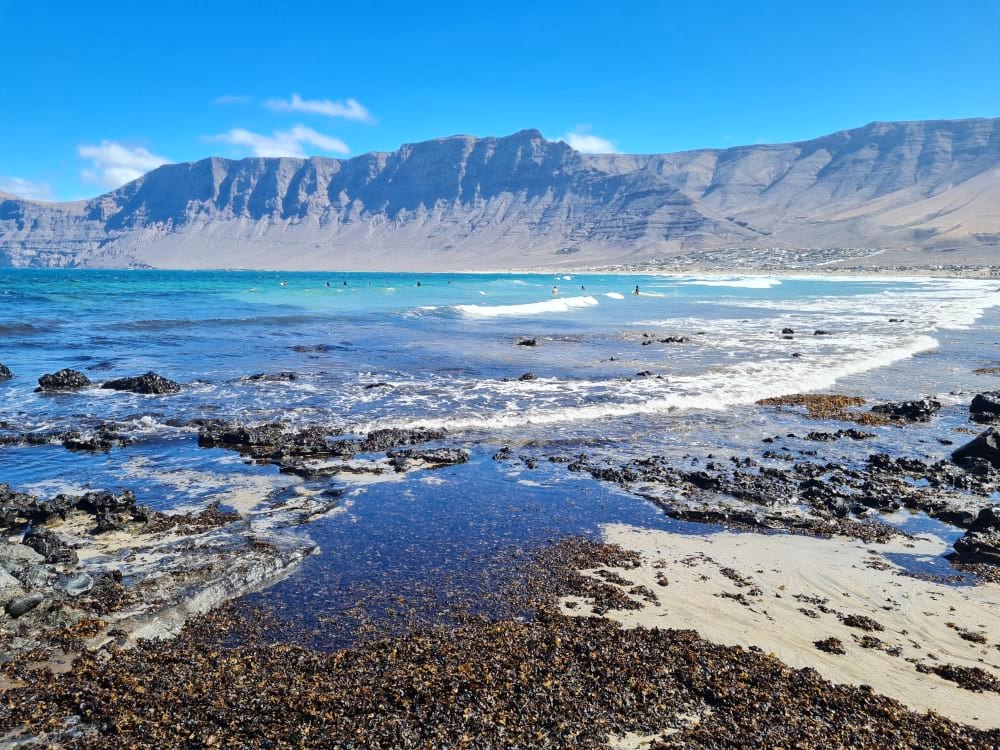 If all of this wasn’t enough, Lanzarote also has some of the best night skies on Earth. It benefits from being an island in the middle of the sea, without much light pollution. We climbed a volcano at sunset, and trudged into the crater. Which obviously, has been dormant for thousands of years. With the crater rim acting as a sort of natural observatory, the billions of stars of our Milky Way sidled into view, looking on first inspection like a light cloud towering over us, from horizon to horizon. 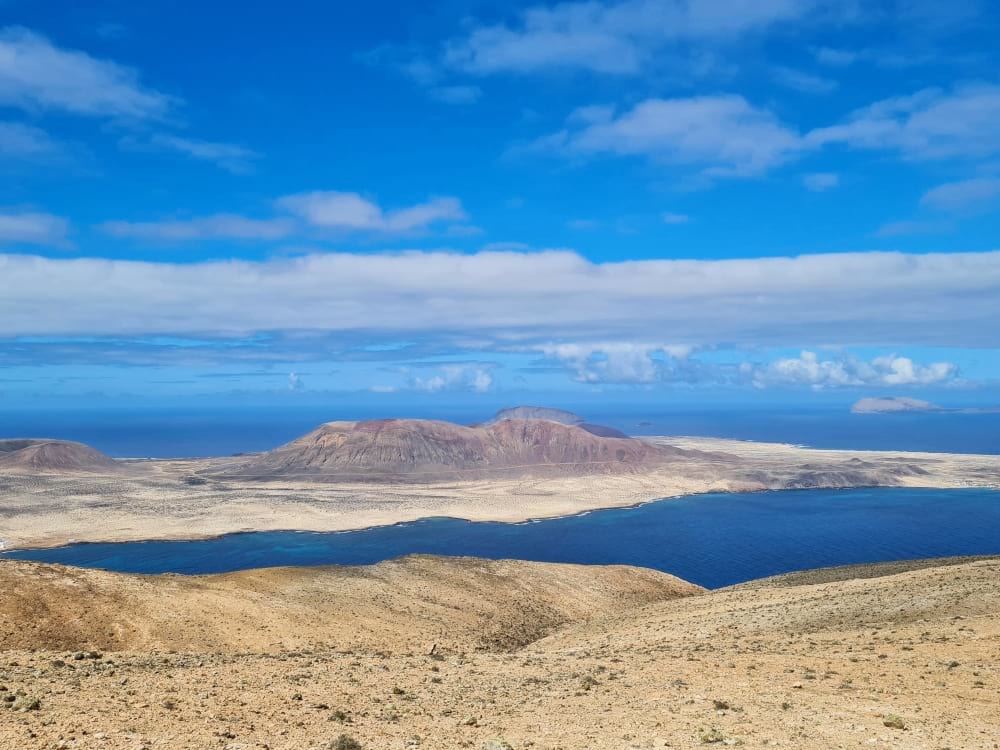 Views over the edge of the Earth.

It made us feel very small indeed. And much like in the rest of Lanzarote, made you very aware that you were living on a planet. A rock careering through space. Not only because the Earth’s crust here is thinner than you’d hope it to be – it’s clear in Lanzarote that our planet has a molten core desperate to burst to the surface to kill us all – but because you could also viscerally see so much of our galaxy each night. I loved it. And as I lay there watching the stars, realised my trip here couldn’t have been further from what I’d imagined. 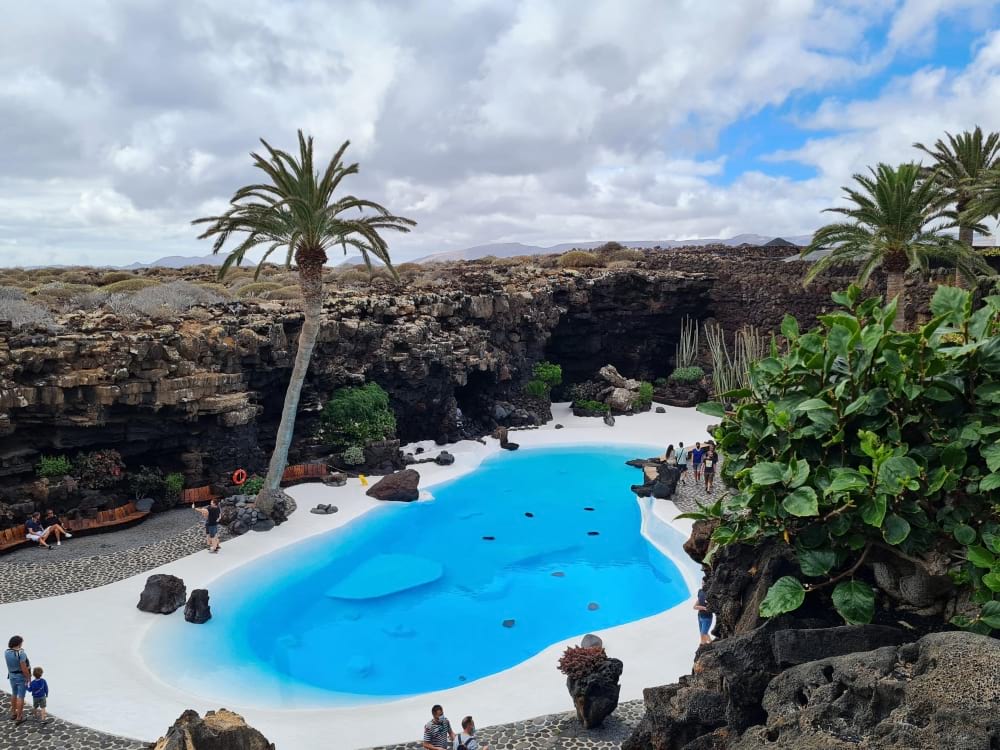 The unique architecture of local boy Cezar Manrique can be found all over Lanzarote.

With my judgmental little tail between my legs, we booked a trip to neighbouring island Tenerife, before we’d even got home to London. On the flight into Tenerife, all I could see was dry and scorched land. And mile upon mile of ugly holiday apartments. We left the airport, and hopped in the car. There was a fairly substantial motorway ringing the entire island. Peppered with advertisements in English about massive waterparks, go karting, and other touristy stuff that I clearly thought was beneath me otherwise I wouldn’t have mentioned them just here. Signs to to a beach called Playa del Ingles (English Beach) made me shudder. “This is more like it,” I said smugly to Sophie, as if my being correct about Tenerife being crap was compensation for the fact we’d payed money to be there on holiday. 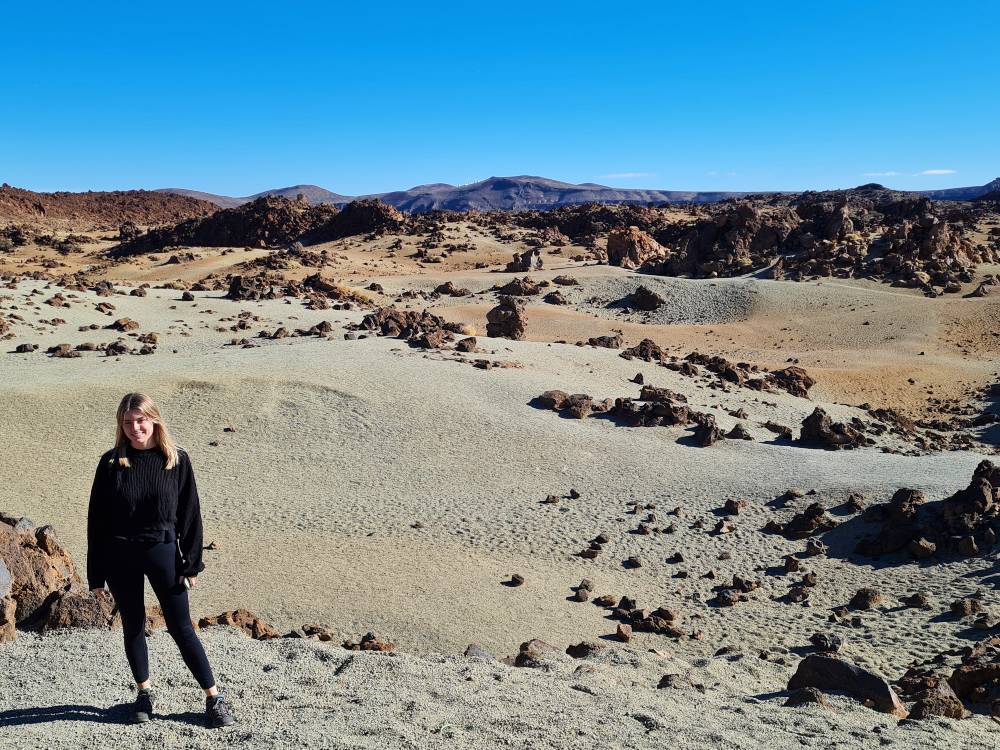 Sophie, on the moon.

But. Things started to improve from here. Rather than staying in one of the overdeveloped tourist areas, we stayed at a slightly higher altitude in an AirBnb. (I later questioned whether the decision to stay higher up was a subconscious and pathetic attempt to literally look down on the other holidaymakers on the island, before remembering I surely can’t be that much of an awful human being. Perhaps it’s just nice to have a view?) Once you leave the strip of tourist stuff surrounding the motorway, you begin to see how stunning this island is. For starters, Tenerife is a fantastically exotic place. The ‘island’ is essentially a giant volcano, sitting just off the coast of West Africa. You can drive up to see Mount Teide, and it’s truly awesome. At 3,715mn (roughly three times the height of Ben Nevis, the UK’s tallest mountain), its snow-capped peak jutted out against the rich blue skies. There area few places I’ve ever been where you get a sense of the true scale of a mountain. After all, you can do hikes in Tenerife at about 2,000m and still see the ocean glistening away, impossibly far down below you. 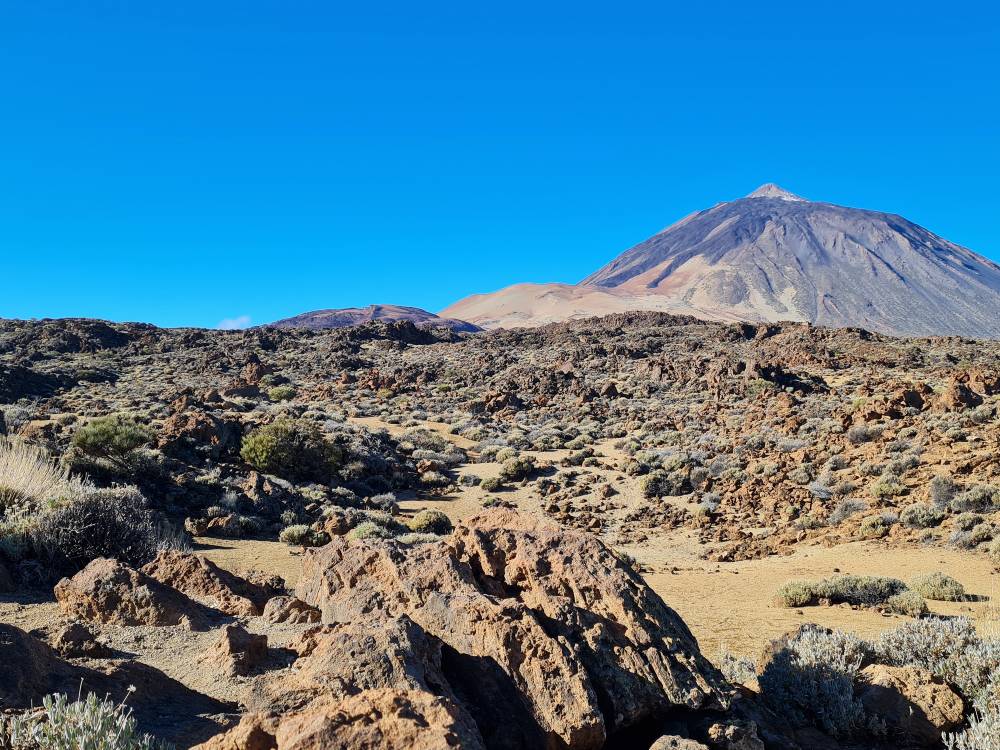 The Teide National Park – like much of Lanzarote – is an otherworldly mix of orange lava flows, bizarre black rock formations, and lots of sand. Thoughts of being in the Atacama Desert rang true once again. We snaked our way around the winding roads through the national park, gawping at the scenery on show on various hikes. It’s stupendous, and even offers better stargazing that in Lanzarote. 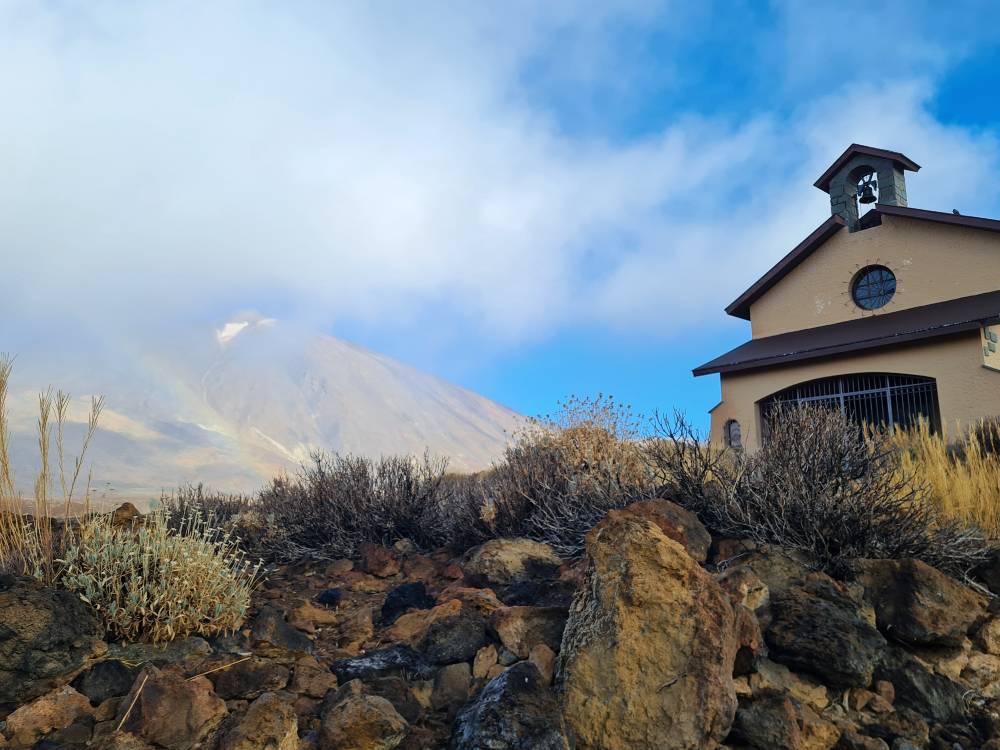 At altitude and with no light pollution, Tenerife has the third best night skies on the planet. According to NASA. Don’t just take my word for it. And if you do take my word for it and go stargazing here, prepare to feel very small indeed. Using a telescope, you learn that every ‘star’ we can see with our eyes is often a collection of many hundreds of them. This is terrifying, in a pleasant sort of way. In Tenerife, things don’t just end at the national park. There is a lush band of forest sitting just beneath it, which is great for hikes. A micro climate on the west of the island is found at the Anaga Rural Park, which is filled with subtropical forests and vertiginous peaks. With little, colourful villages perched on the mountain tops, and small terrace farms cut into the hillsides, it felt a bit like Laos or the Philippines. And given that it – and the Teide National Park – were largely tourist free, it quenched my perplexing desire to feel like I’m exploring when abroad. (Despite clearly being a tourist myself, I happily complain about places being “too touristy,” with no sense of irony). 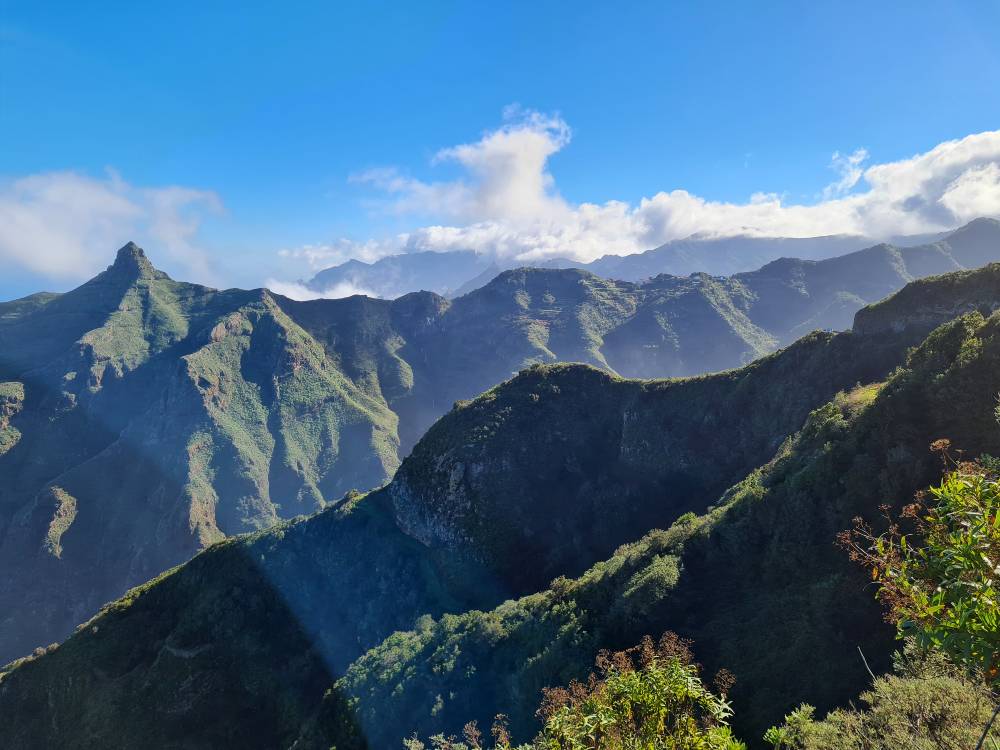 The thing is, if you dare to leave your hotel resort, you can have much of this stunning and beautiful island to yourself. There are few better places for winter hiking so close to Europe, if any. It’s a shame that from what I could see, many tourists here won’t experience much of it. One of my good friends kept updating me with sarcastic tips on things to do in Tenerife, having been many times. And having yet to set foot out of the hotel resort that he stayed in on each occasion. 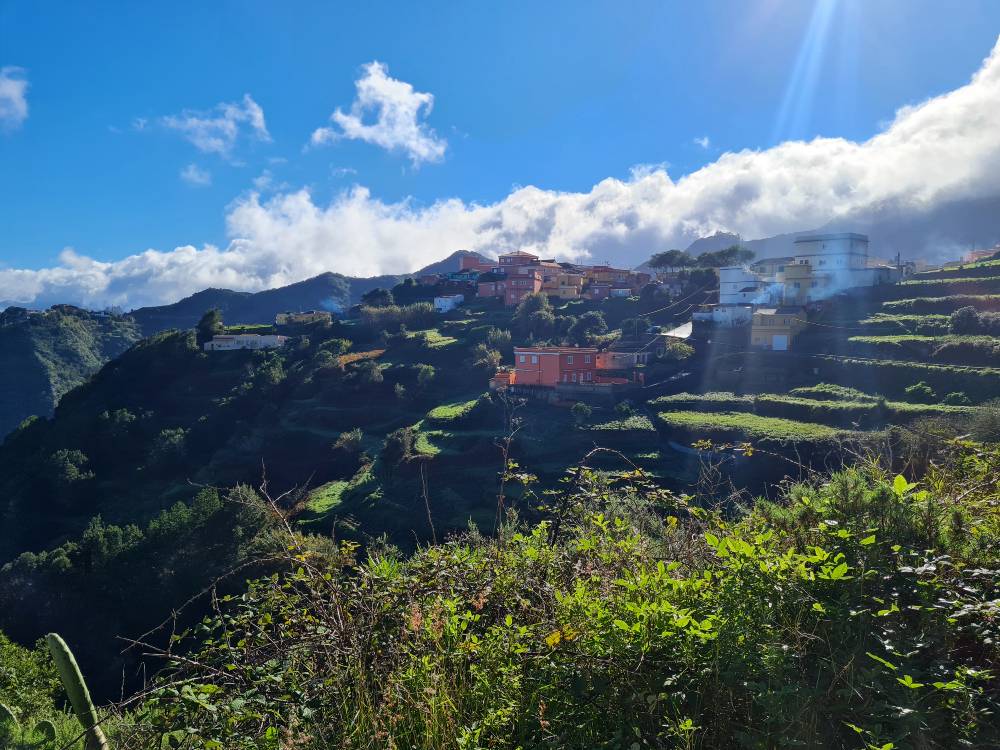 For both Tenerife and Lanzarote, perhaps the reluctance of holidaymakers to leave their resorts is a good thing? They have a lovely holiday, and get some sun. And anyone who feels like exploring these captivating islands can do so, without hoards of tourists everywhere you go. I was bowled over by both islands. And will probably come again. 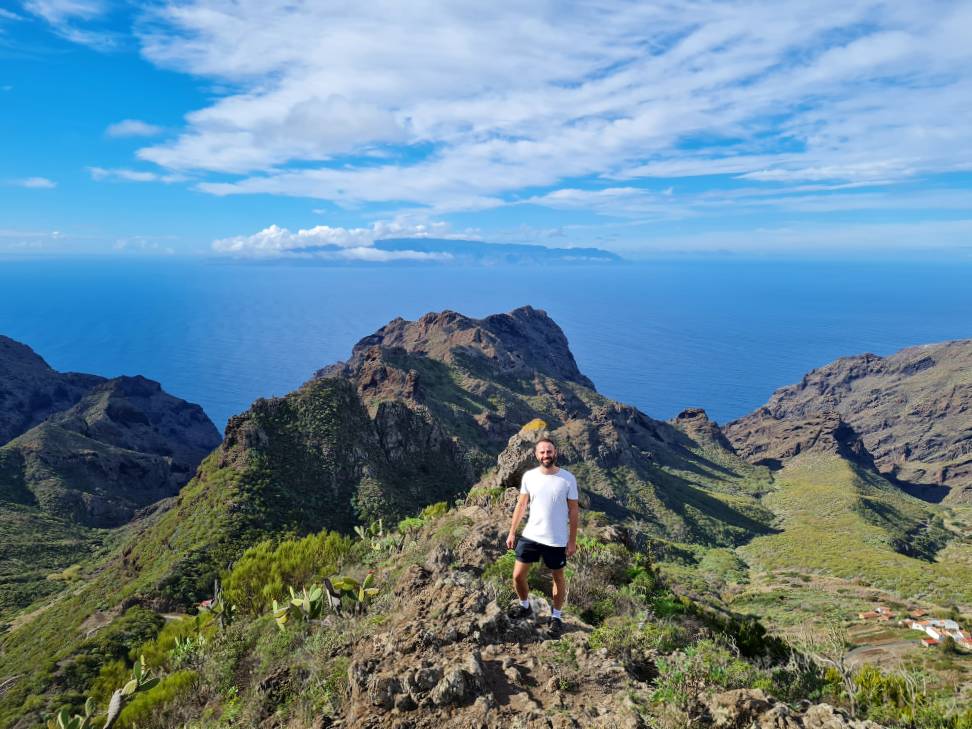 Epic views on the west coast of Tenerife.

I never thought I’d utter those words. Must now book a holiday to Chad or South Sudan, to boost my credentials in traveller circles.