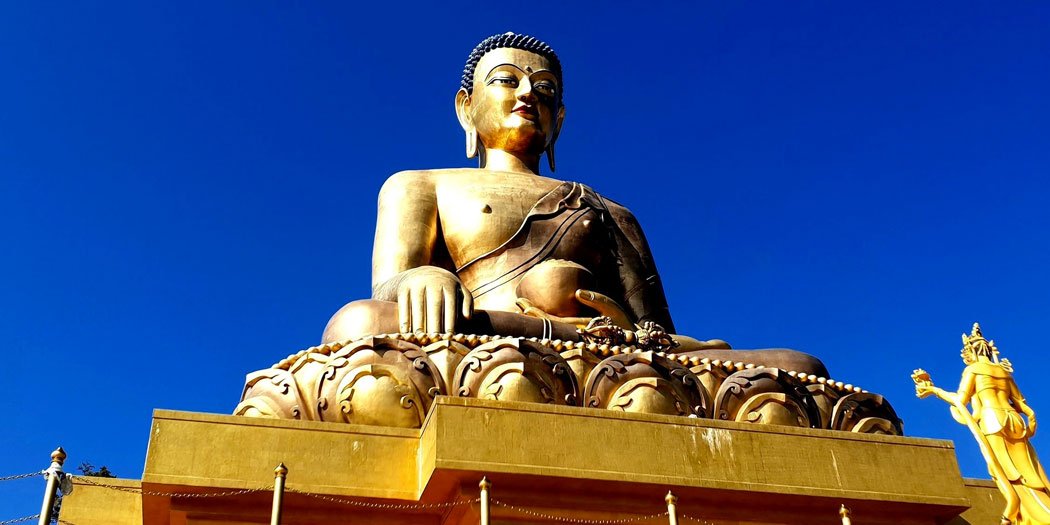 Bhutan – The Land Of The Thunder Dragon

Country #130. Bhutan is perhaps the most serene country on Earth. A country surrounded in mystery and isolation, it has only opened up its beauty to tourists in the last couple of decades. Bhutan means the ‘Land Of The Thunder Dragon’. It’s one of just two countries which has a dragon on its flag. Having been fortunate enough to visit both Bhutan and Wales, I can confidently assert that the dragon imagery is more appropriate in Bhutan. I don’t mean any disrespect to Wales, although I have just done so by using the previous half-sentence. But Bhutan is a mysterious land covered in jagged Himalayan peaks, dotted with red-robed monks and temples, and shrouded in superstition. On the other hand, you are greeted by Newport after crossing the Severn Bridge. 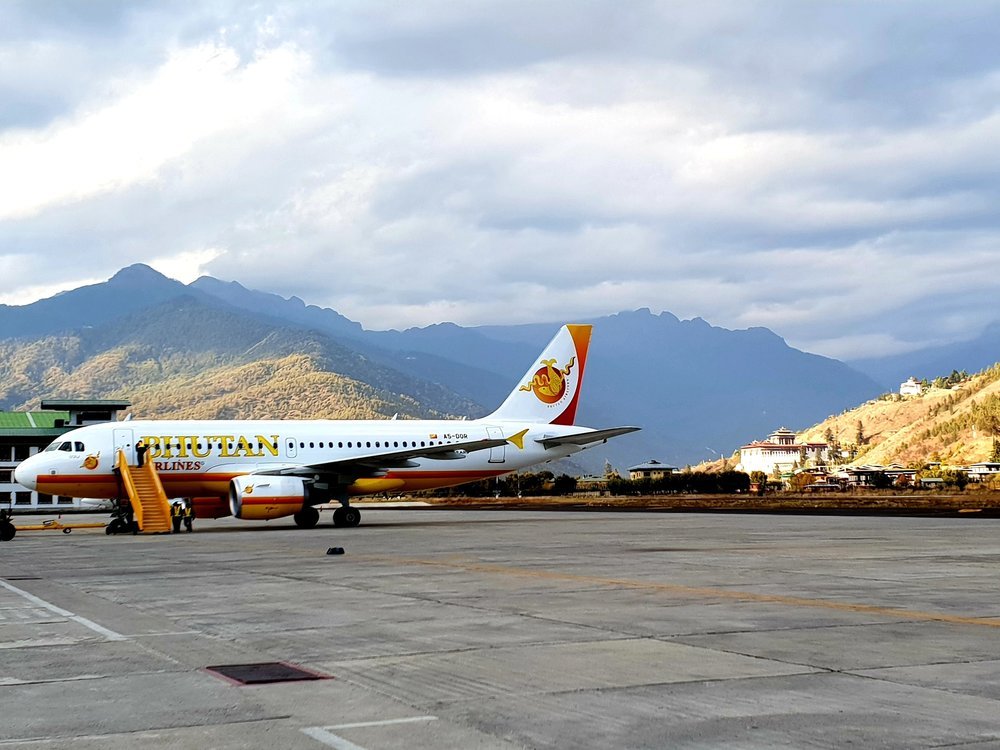 The first thing that hit me upon stepping off the plane in Bhutan was a palpable sense of serenity. I felt calm. It must have been the effect of the jet blue skies above and the feeling of the crisp mountain air filling my lungs. Alternatively, I was just happy not to be dead. If anyone wonders how it’s possible to land a large metal bird in the middle of the highest mountain range in the world, I’ll tell you: with extreme difficulty. While I commend the engineers for building the airstrip in the first place, my limited understanding of aeronautics tells me you should avoid having a large hill directly in front of the runway. We had to violently swerve left and then right to avoid the mound, seconds before touching down. 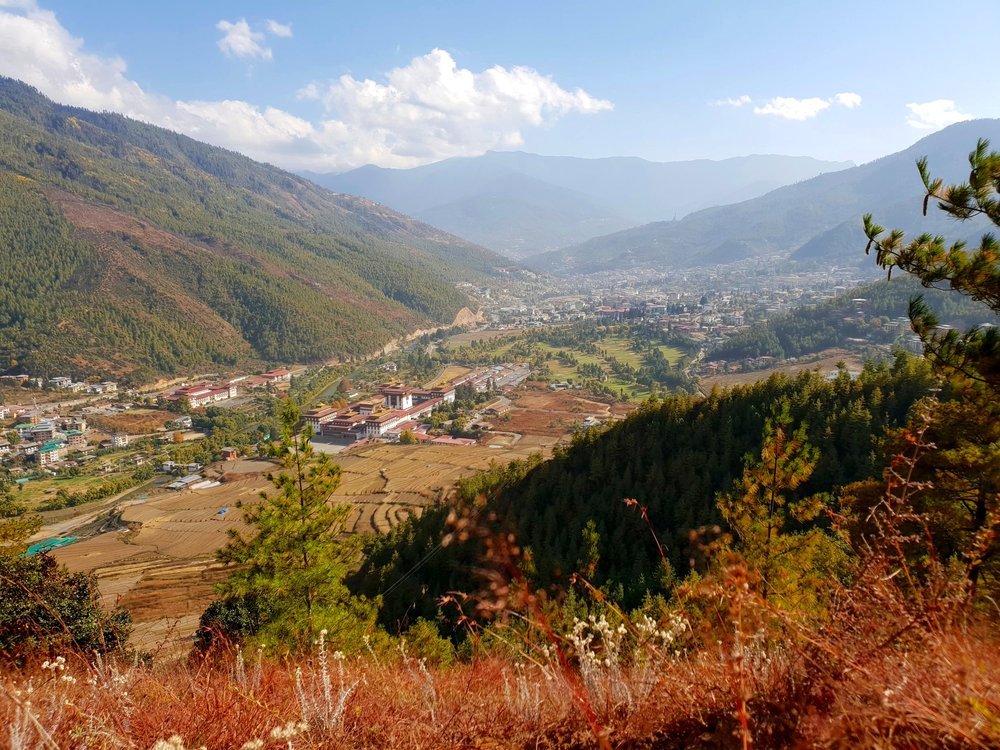 In no way already concerned about the infamously robust air safety record in my next destination, Kathmandu, I left the airport and met my guides. You can’t yet travel independently in Bhutan. The Bhutanese scenery was instantly enthralling, with the dry, mountainous landscape dotted with colourful prayer flags and Tibetan architecture. The roads were smooth and clear. People drove slowly, a rare novelty in this part of the world. A few hours earlier, I had the displeasure of being driven from my airport hotel in Bangladesh to the airport. In a ten-minute journey, we almost crashed twice. And did actually once, into a man on a bicycle. The cyclist was fine, but needless to say my taxi driver admonished the cyclist for allowing his taxi to drive into the back of him.

Bhutan is one of the only fully Buddhist countries in the world. As a keen meditator, and by definition probably a smug millennial, I felt it was my duty to discover this land… and myself? No, just the land. What’s interesting is that most people I spoke to didn’t practise meditation. Rather than strengthening their mental health through the secular practice of meditation, they instead liked to focus on worshipping the man himself, the Buddha. 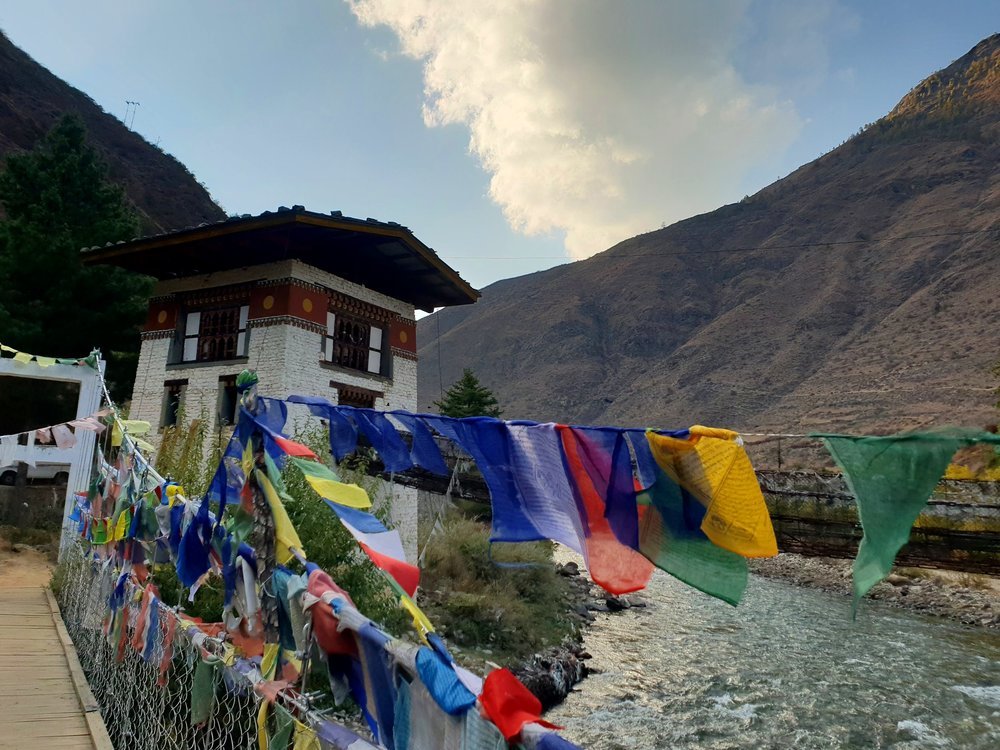 Pieces of cloth attached to a bridge, blowing in the wind over a river.

Interestingly, the Buddha dismissed religion. He taught his followers the technique of meditation, as a tool to make you happier. Probably the last thing he wanted was to be worshiped by anyone. Indeed, we walked past one Buddhist man in Thimphu who had been sat in the same position for 30 years, spinning a prayer wheel and reciting prayers. Relaxing no doubt, but probably the opposite of what the Buddha had in mind. Clearly, the lure of worshiping a mystical character, along with the associated miracles, magic, and unverifiable stories, is still too strong for the vast majority of the world’s humans. 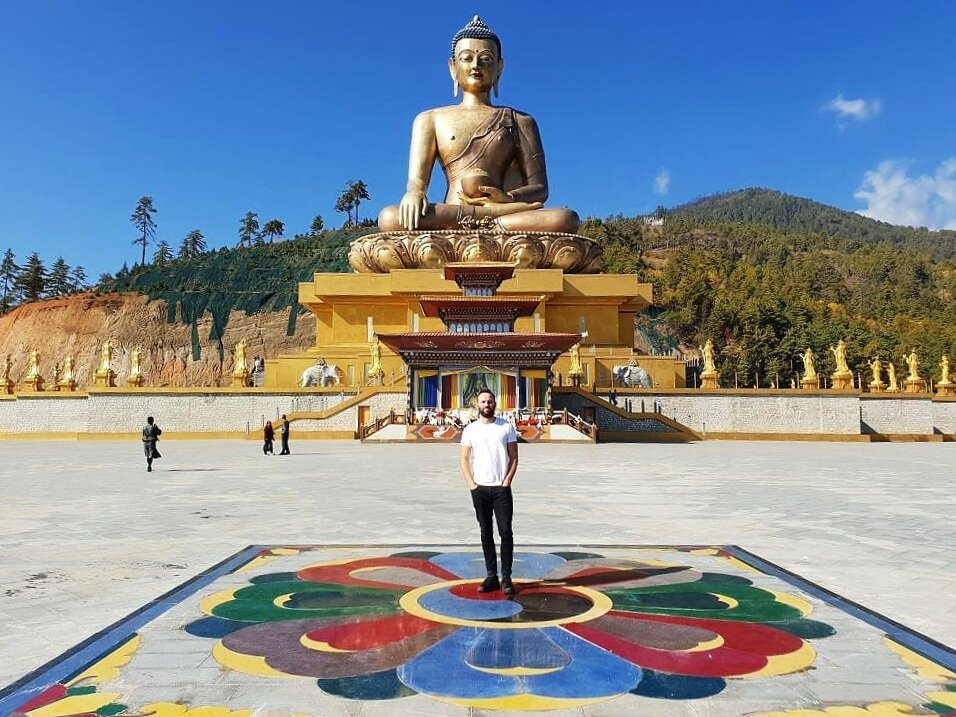 The Buddha did his best to instruct his followers not to worship anyone. This giant statue implies these calls fell on deaf ears..

The Land Of Happiness?

That said, the rumours were true. Most people I came into contact with in Bhutan were incredibly friendly. My guides, Dorji and Tenzen, could not have been more accommodating. We spent the first two days in the lazy capital Thimphu. It’s a curious mix of old and new. A regular sight was a monk, wearing a red robe and with a shaved head, glued to his massive iPhone. But smiles greeted you pretty much wherever you went. The city sits in a large, forested valley, overlooked by the recently completed giant statue of the Buddha, as well as prayer flags stretching high into the mountains. 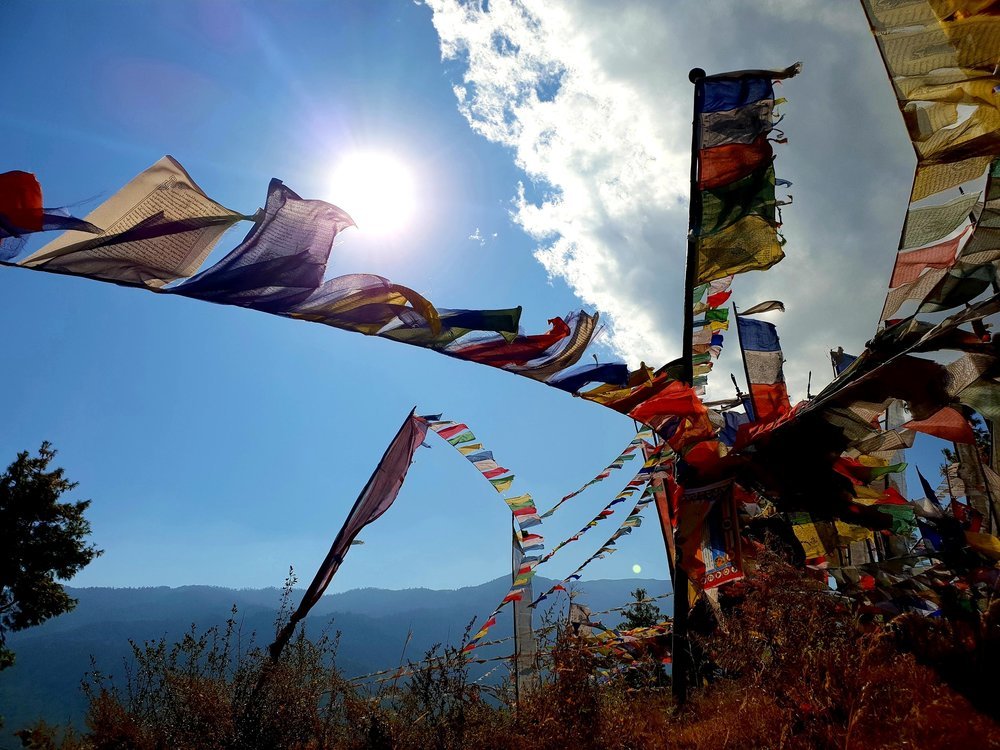 Prayer flags are a common sight all over the hills of Bhutan. A bit like a better version of bunting (strange word).

Bhutan is the only country in the world to use Gross National Happiness (GNH) as its main measure of national development, rather than the Gross National Product (GDP) used commonly elsewhere. I was immediately torn. The economist in me was skeptical of a non-quantifiable development measure, while the pretentious millennial in me loved the concept. There are pros and cons. On the positive side, Bhutan is one of the few countries in the world where the preservation of the environment, sustainable societal development, and the promotion of culture are the government’s main aims. These are clearly positive things. On the downside, a lack of focus on GDP growth means meagre government revenues. In turn, this means poor healthcare, public services, and schools. Female literacy is only just above 50%. 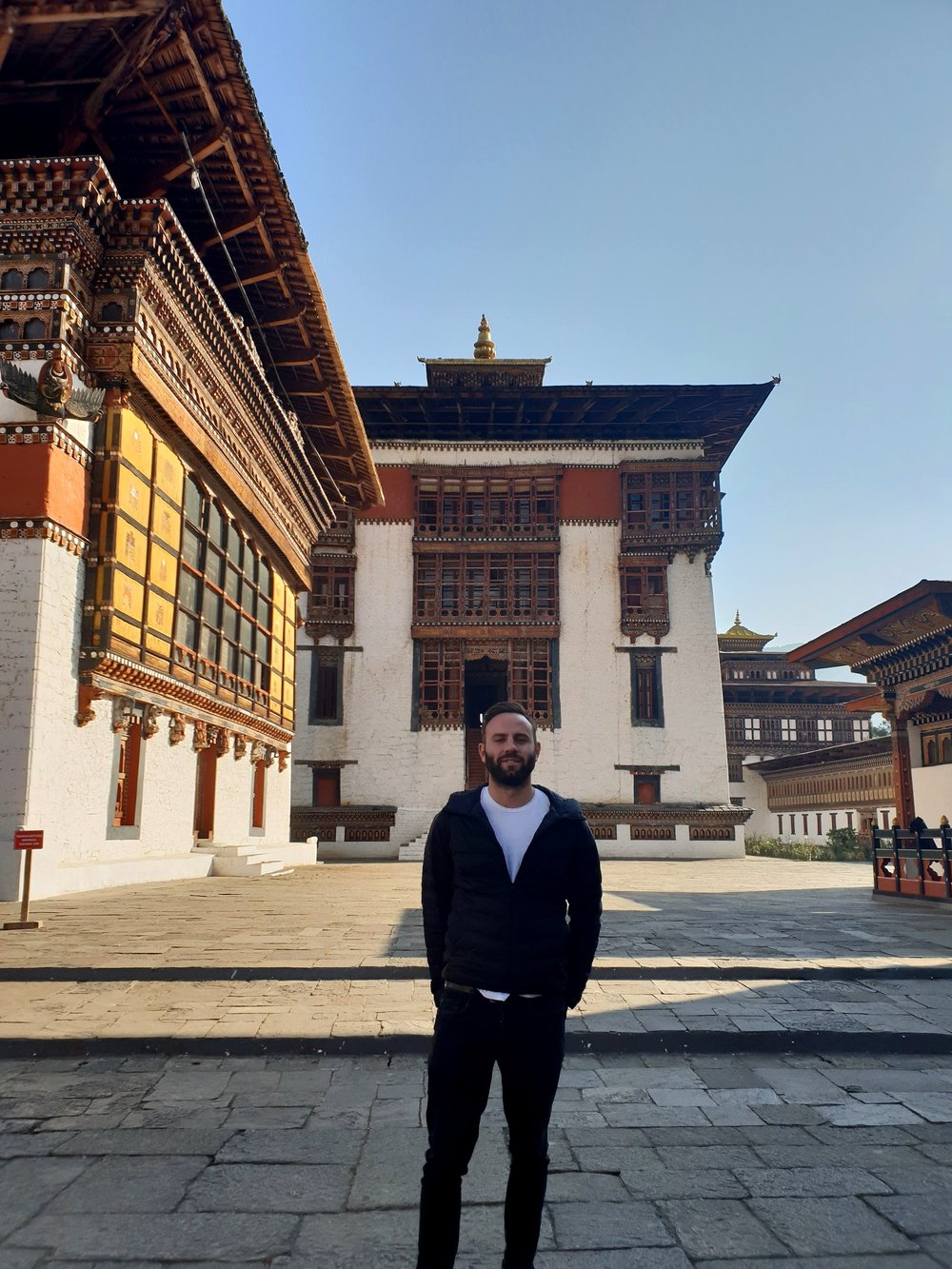 One of the highlights in Thimphu was the Royal Palace. It’s a beautiful Tibetan structure used by monks and government administrators, as well as the country’s beloved king. In Britain, I often despair at the hysteria following our royals. I die slightly inside with every news story of things like Pippa Middleton having a baby, or the thought of Prince Charles being king. But if you think that’s bad, there are literally portraits of the Royal Family in every single house in Bhutan. Most people wear badges with the faces of the royals on them. They are everywhere.

It was eerily similar to North Korea. Although I was assured that the badges and paintings were optional, and the gulag didn’t beckon for those not wanting to play ball. To be fair, the royals are adored here. The king lives in a very modest house and my guides tell me they do a lot for the community. And Hello! magazine declared that young Prince Jigme is officially the world’s cutest royal baby. I was sceptical at first, but I dare anyone to google a picture of him and disagree. Apart from readers of the Daily Mail perhaps. They would likely view such a comment as high treason against Britain’s Prince George, having been force-fed large helpings of jingoist sick by the newspaper for breakfast each morning for decades. 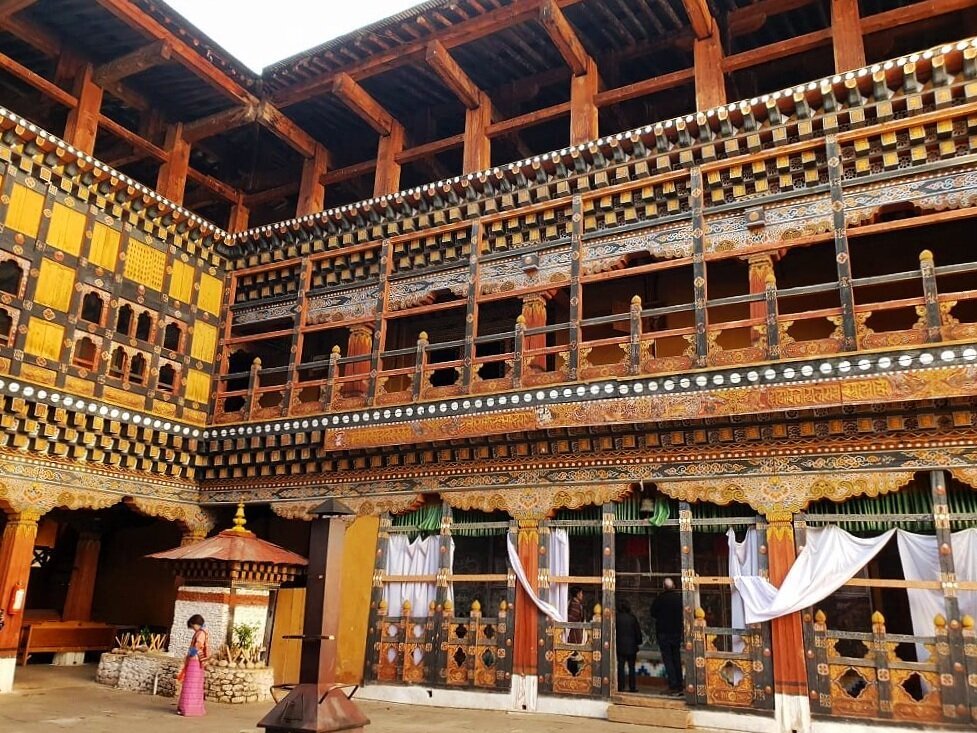 On the topic of food, it’s worth mentioning the cuisine here, which was delicious. As a vegetarian, there were plenty of options available, with rice and spicy chilli-based curries the norm. A particularly delightful local dish was cheese and chilli, which while as simple as the name suggests, is addictive. And served at almost every meal. As a vegetarian, it would be remiss of me not to throw this decision smugly down your throat as much as humanly possible. Ideally via Facebook or Instagram. There are few things as irritating as a sanctimonious vegan. Let people make their own mind up. And in any case, having been vegetarian for three whole weeks at this stage, I’m pretty sure my 30 years of meat consumption have been cleaned from the slate now, thankfully. 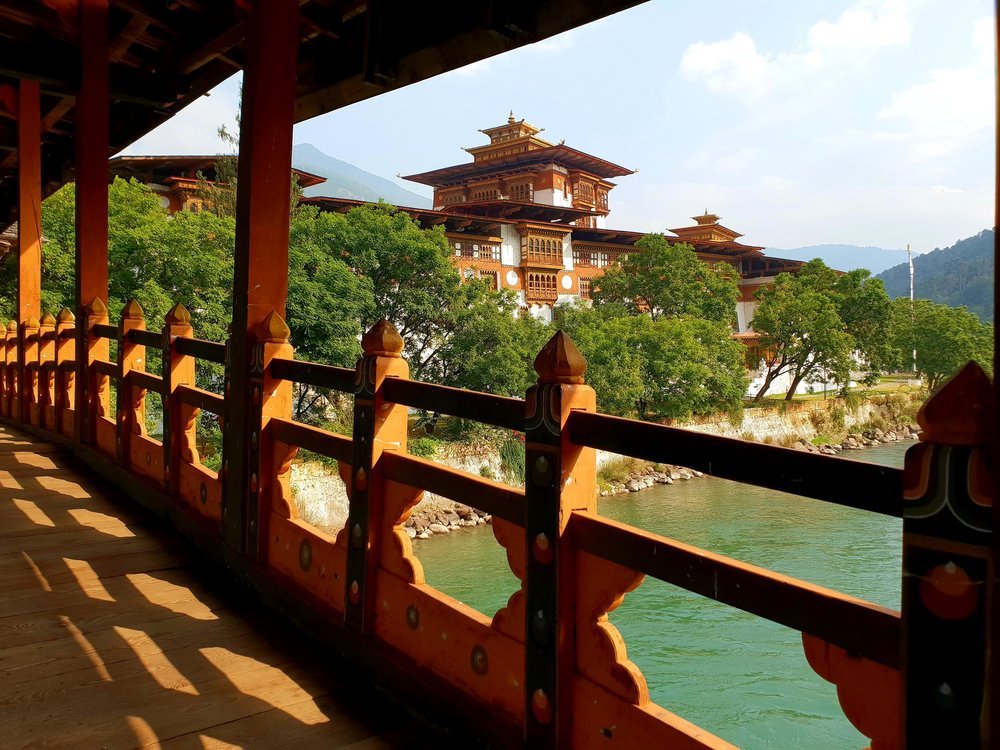 Onto Punakha, the country’s old capital. The main attraction here is the Punakha Dzong, an audacious Tibetan-style temple which sits majestically between two electric blue rivers. It’s a sight to behold, and well worth the long drive through the foothills of the Himalayas. On the way to the Dzong, we stopped at an equally audacious temple. Not because of the architecture I may add, but due to the man the temple was dedicated to… 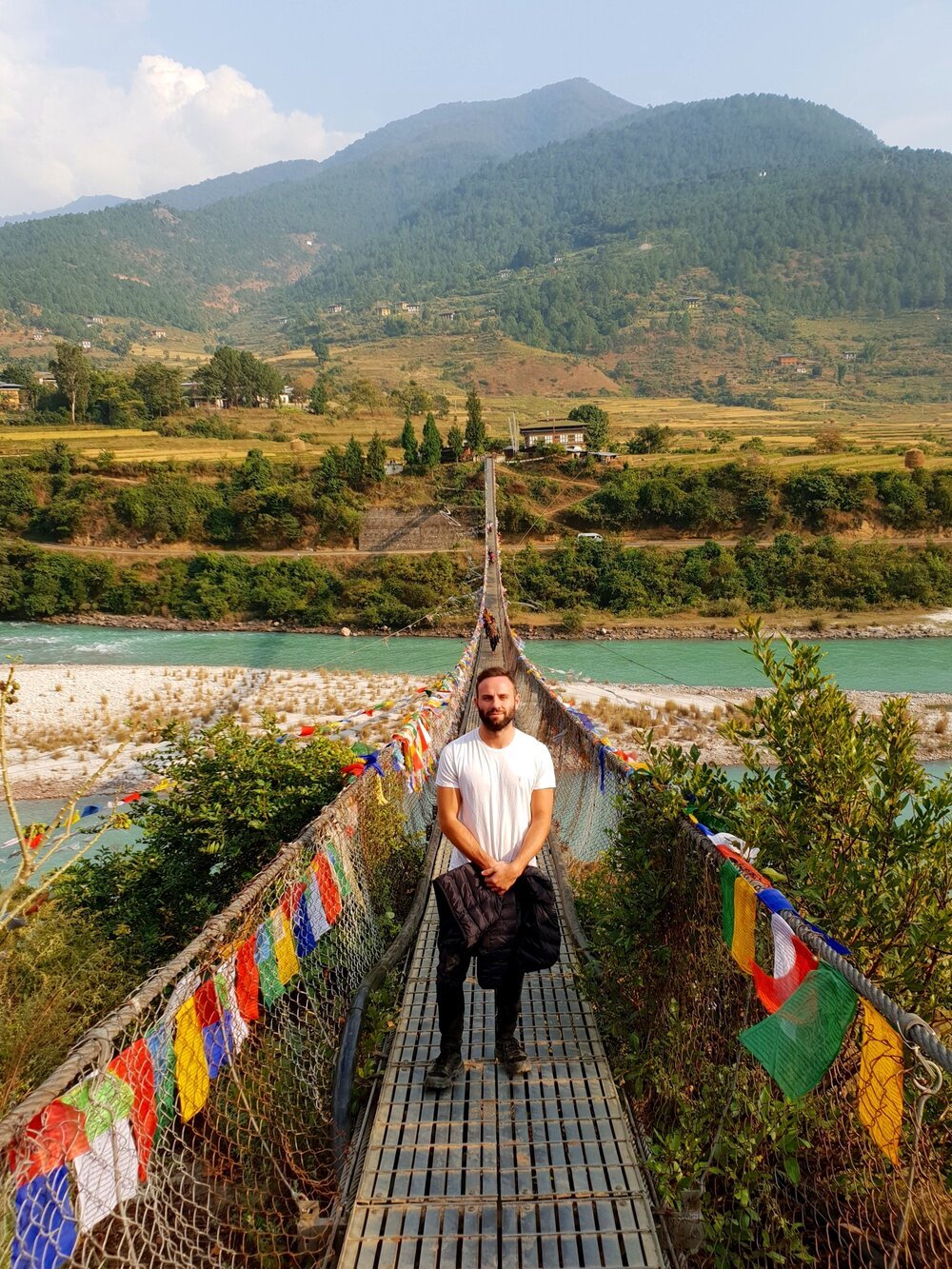 Not being scared of heights on a bridge in Punakha.

The ‘Temple of Fertility’ is dedicated to a monk called Lama Drukpa Kunley. Otherwise known as the Divine Madman, the monk lived over 500 years ago. This monk is genuinely revered by Bhutanese Buddhists, but had a slightly unorthodox approach to his practices. For starters, he told women they would be enlightened if they slept with him. Against this backdrop, he is alleged to have slept with over 5,000 women. He drank and smoked.

In one fable of dubious moral utility, my guide told me that a couple once went to visit the Divine Madman. They were worried their baby would die young, having lost their first child to disease. The solution? The Divine Madman threw the child in a lake. The child turned into a dog, and then the evil spirit which was alleged to be the main risk to the child’s life, was banished. The child was also now dead, I hasten to add. 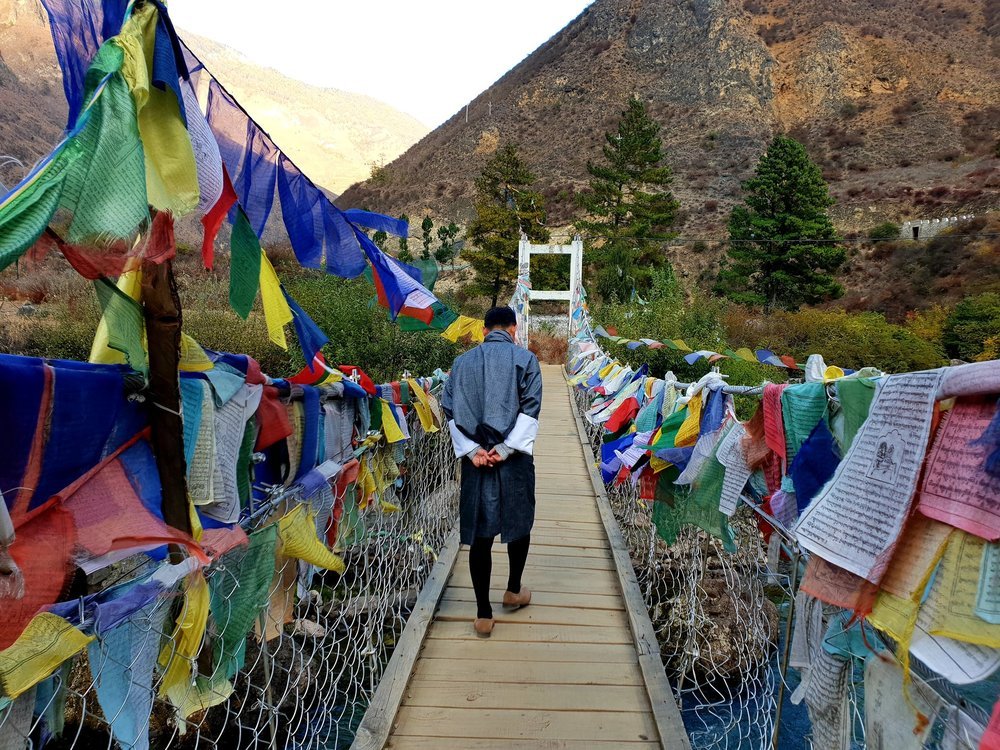 You can tell this man is wise simply by the way he is walking.

At this point in the story, my guide knowingly looked at me in a way that said, “The main lesson of this story has now been delivered, no further questions are necessary”. To be fair, it’s quite similar to the story of Abraham, which I was taught as a child at school. The lesson here was: kill your child if a voice in your head tells you to. To this day, women still flock to the temple of the Divine Madman, to increase their chances of becoming pregnant. To do this, they simply have to walk around the temple three times, while holding a 4ft wooden sculpture of a phallus. No, this isn’t a joke. People actually do this. 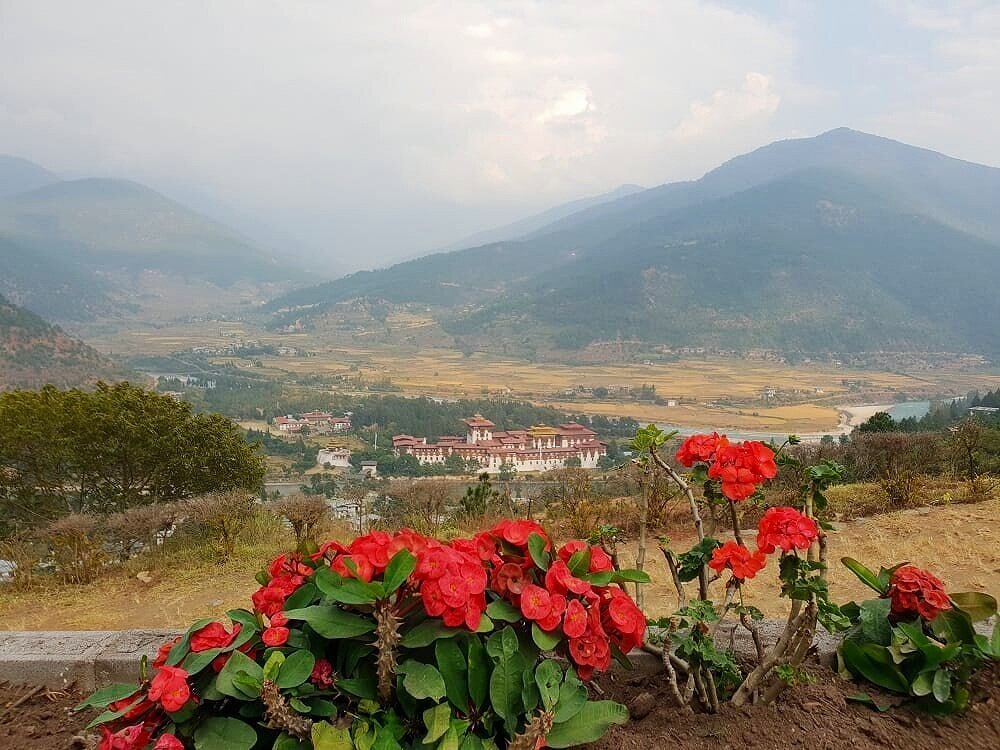 Bhutan is a dry and dusty land.

The last part of my trip included a trip to the jewel in Bhutan’s crown: the Tiger’s Nest. The remote Buddhist monastery impossibly clings to the side of a 1,000m high vertical cliff, reached after a three-hour trek. I doubt there is a more spectacular location for a structure like this, towering over lush green mountains and sat above the mist in the valleys below. At an altitude of around 3,000m, the clear skies appeared as a shade of rich blue. 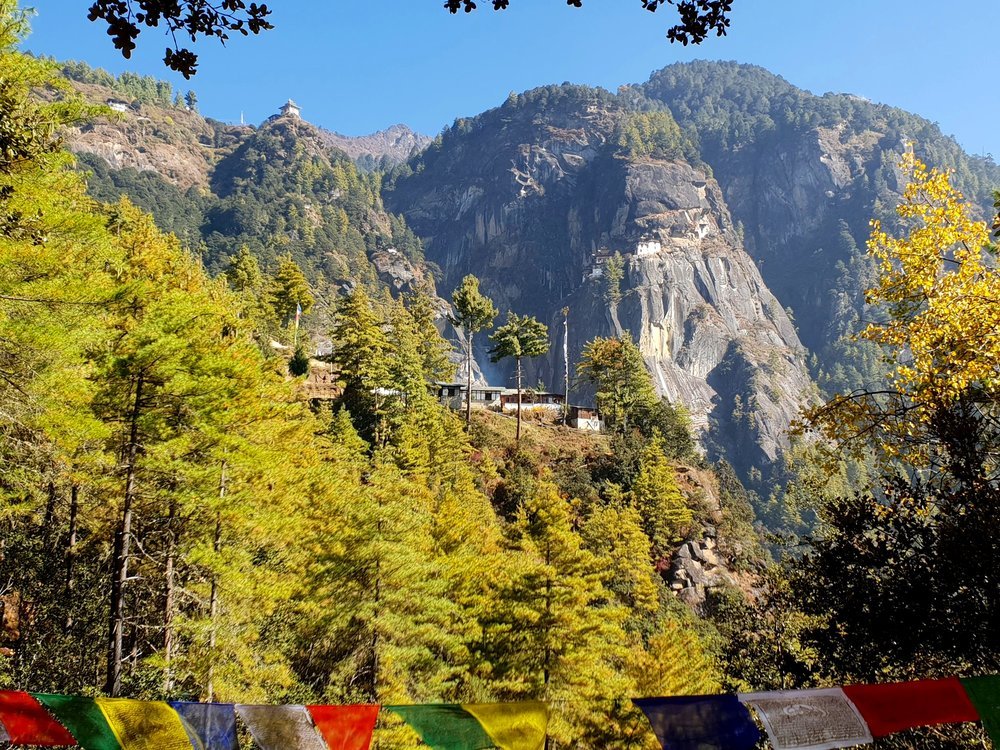 The Tiger’s Nest, perched on the cliffside. Building the temple on flat land would have been too easy.

I also doubt it was very easy to build. I asked a few questions about how they managed to build this incredible structure. Surely people died during its construction? Most of the answers to these questions were: don’t worry, it was all magic! A monk (Guru Rinpoche) arrived on a flying tiger, and the temple appeared. The numerous people who must have died constructing this building can rest assured they died in vain. 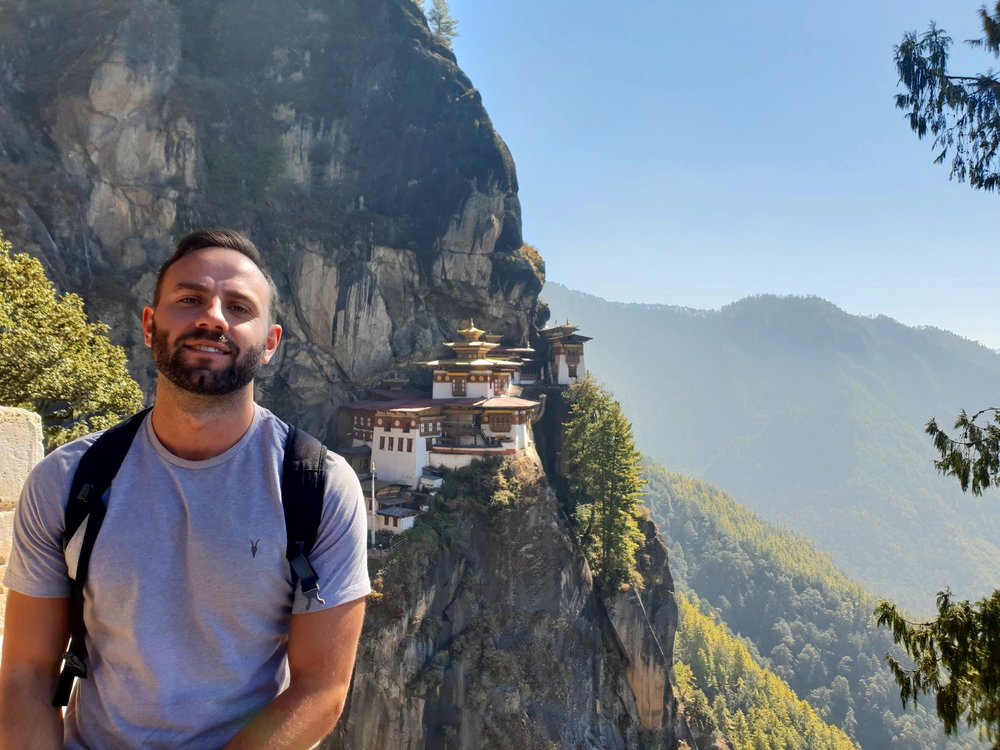 A great picture of the Tiger’s Nest, ruined by the image of a great ape on the left hand side of the screen, who insisted upon his inclusion in the photo. I doubt any picture is improved by the inclusion of a human, but for some reason this does not stop us all doing it.

With a heavy heart, it was time to leave Bhutan. In the 140+ countries I’ve been fortunate enough to visit, this is without question the most serene and mysterious. As I waved off my guides and boarded my plane, I briefly reflected on the wondrous week I’d spent in the small Himalayan kingdom. And then on my life, which I was pretty certain was about to come to an abrupt end on the side of a giant mountain.