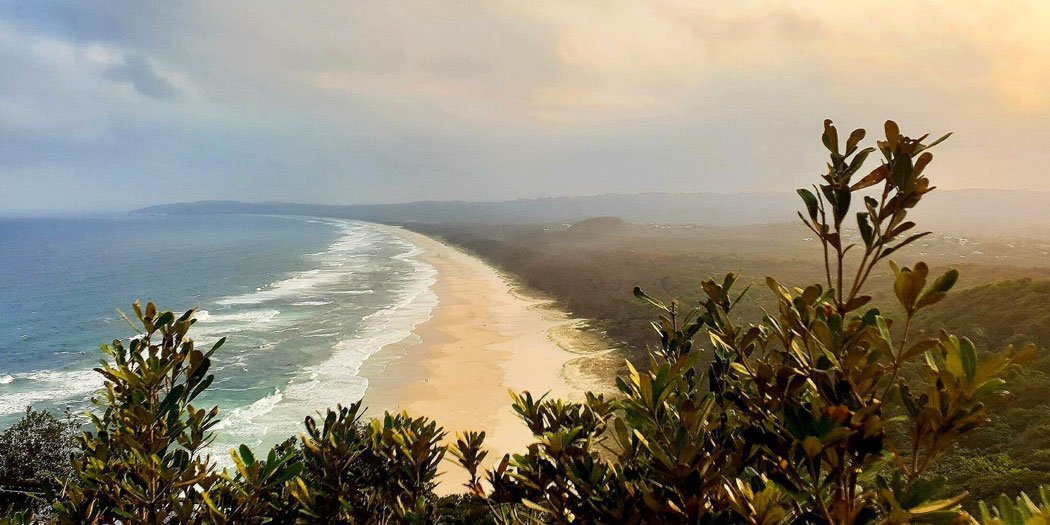 Australia – As Good As Australians Relentlessly Boast It Is

Country #41. Having recently visited Iraq, Saudi Arabia, and Madagascar, I questioned whether I should write anything at all about Australia. It just doesn’t seem as exotic. Plus, it’s harder to falsely paint the picture of myself as an intrepid explorer when I spent most of my time in Australia lazing around on beautiful beaches, largely surrounded by other English people. Alas, I’ve been lucky enough to go to this massive island three times and have visited most of the country’s main cities and attractions on the East Coast. So here this article is. 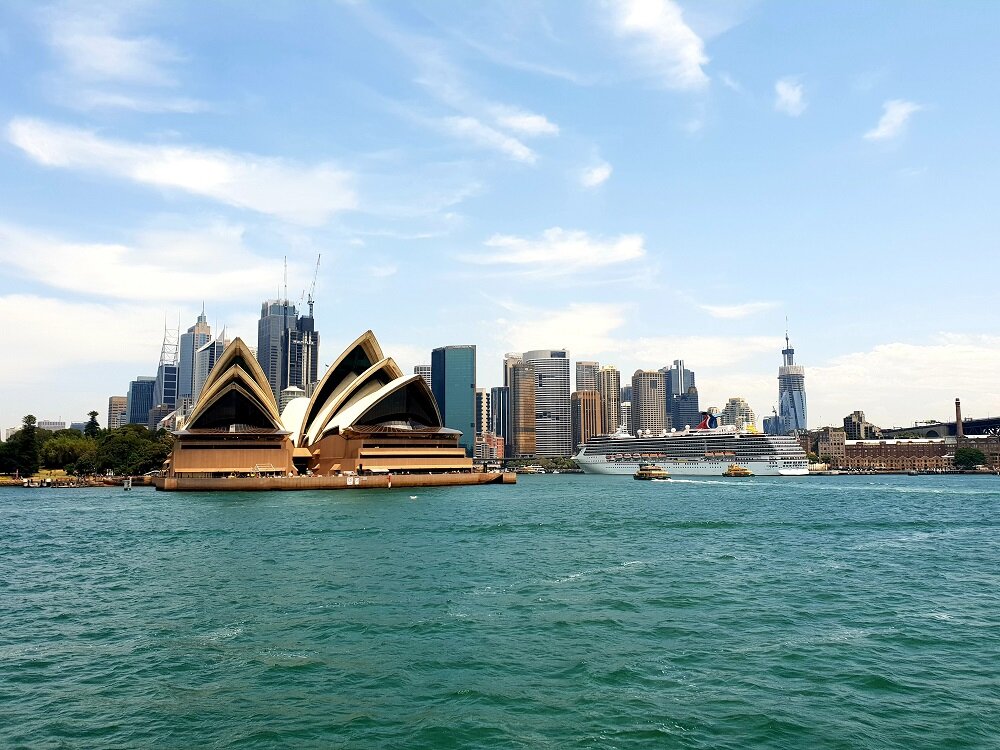 Sydney Opera House still looks modern, despite being completed in 1973.

Coming from the UK, I was constantly reminded of influences from back home in Australia. Australian cities have many roads named after British streets, places, and famous people. Red post boxes dot street corners. The Queen’s profile adorns Australian coins. Australians also love sports generally regarded as stupid by the parts of the world which avoided becoming part of the British Empire (cricket). 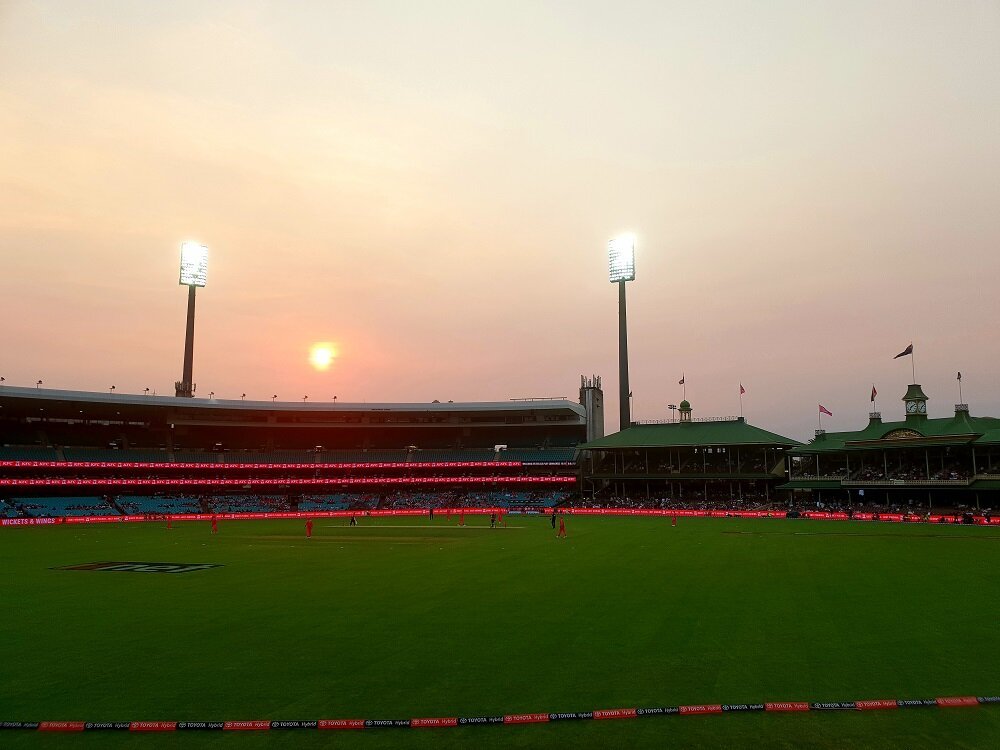 Sydney Cricket Ground. Despite my disparaging comments just then, I actually quite like cricket.

Spending time in Australia made me believe the Brits made quite a large strategic error in 1788. At the time, sending British convicts to an island as far away as possible seemed to make sense. Less so when the island turned out to be 32 times the size of the UK and probably around 32 times more beautiful as well. Had I ruled Britain in the 18th century, I would have sentenced the prisoners to a lifetime of grey skies and drizzle back home and set sail for Australia myself.

Australians are aware of how nice their country is. The way to most of their hearts is to tell them how great Australia is, something they will immediately agree with. To be fair, I use this tactic wherever I go. People like to know that where they live is ‘good’. Even if you’re in a war-torn, failed state, tell locals how great it is, and they will immediately be on your side. “Iraq really is the best place, isn’t’ it?” It’s a winner even if you feel slightly guilty saying it. 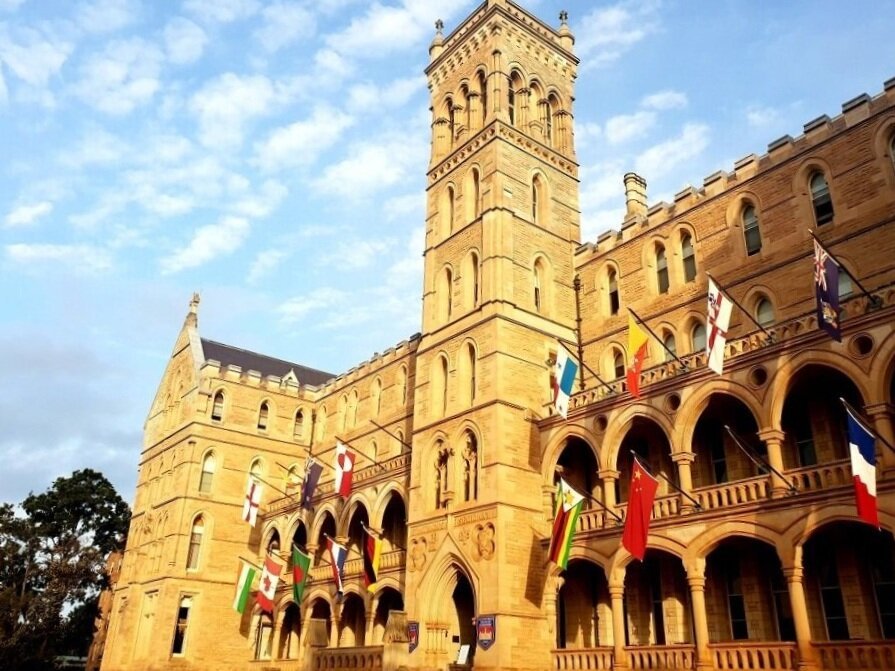 Australians’ love of Australia permeates every facet of life here. Prime Minister ‘ScoMo’ Scott Morrison starts most of his public addresses by saying things like, “We live in the best country in the world,” as if this is a substitute for public policy. In his post-2019 election speech, he took to the stage and simply repeated the phrase over and over again, to ever more hysterical cheers from the crowd.

To be fair, his comments are better than those of former prime minister Tony Abbot. In 2013, he once told Big Brother contestants in a live feed – yes really – that they should vote for the “guy with the not bad-looking daughters”. He succeeded both in referring to himself in the third person and sexualising his own daughters for political gain. He also subsequently won the election, perhaps a harbinger of the Trumpian wave which was about to sweep the western world a few years later. 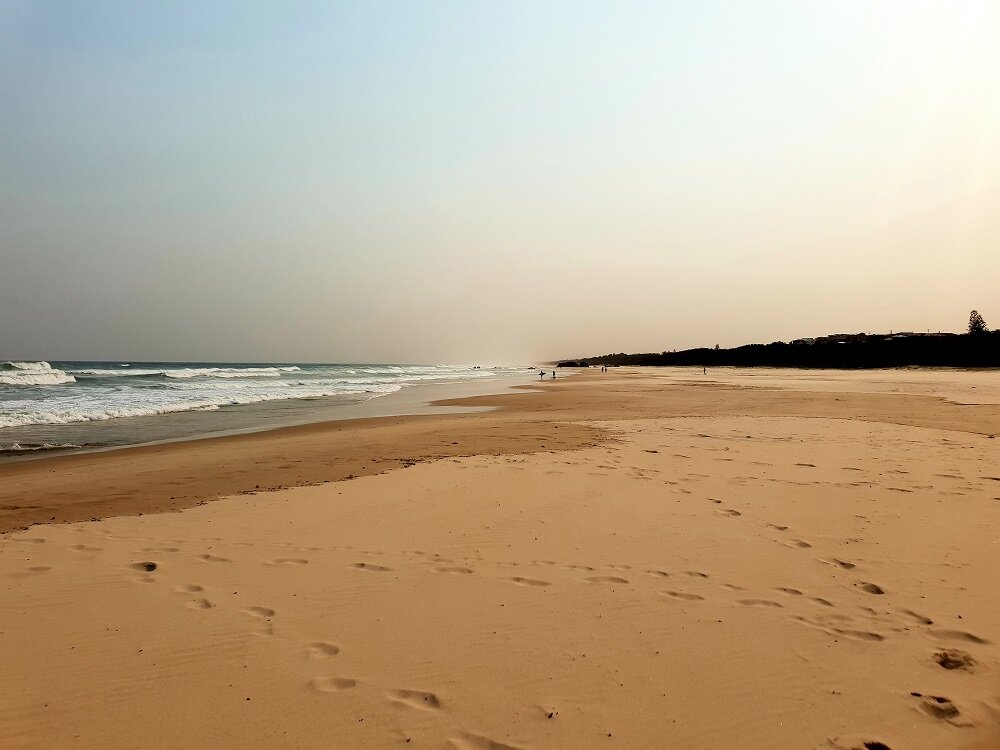 Lighthouse Beach, Port Macquarie. Empty beaches like this are the norm on the East Coast.

The English language, obviously, is another similarity that exists between the two islands. That said, there are a number of quirky differences. People in Australia often say, “How you going?” as a greeting. They’re not asking you which mode of transport you’re taking. Saying that, someone once asked me, “How are ya travelling?” at a supermarket checkout. “In a car mainly,” I almost said, before rightly assuming this was also a strangely-worded greeting. 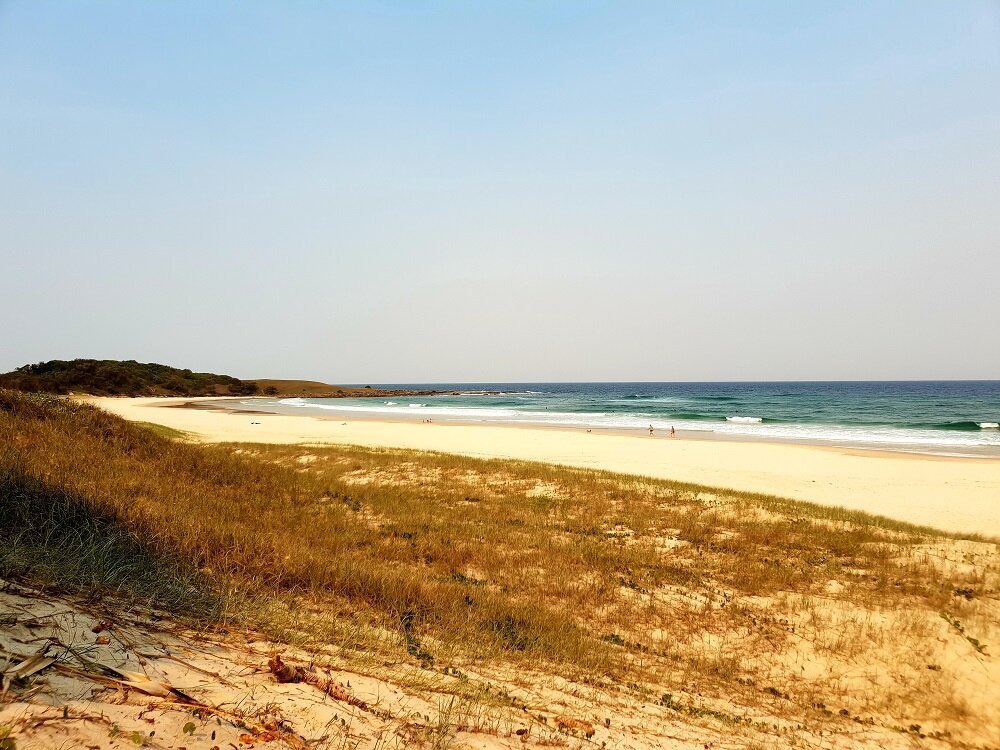 Wooli Bay in Yamba, on the East Coast.

Suffice to say, it’s probably best not to visit Australia if you aren’t into beaches. Pretty much every facet of life here revolves around them. Driving up Australia’s East Coast, you’re spoilt for choice. Every town you roll into, figuratively, you’re greeted by a seemingly endless sweep of white sand, dotted with a few souls and perhaps a dog or two. With excellent roads, the coast is perfect for a road trip. A fact made more apparent to me given that my previous ‘road trip’ was an eight-hour slog on a muddy dirt track in Madagascar. Here are my thoughts on some of the main sights on the East Coast, starting in Tasmania and heading up as far north as Cairns. 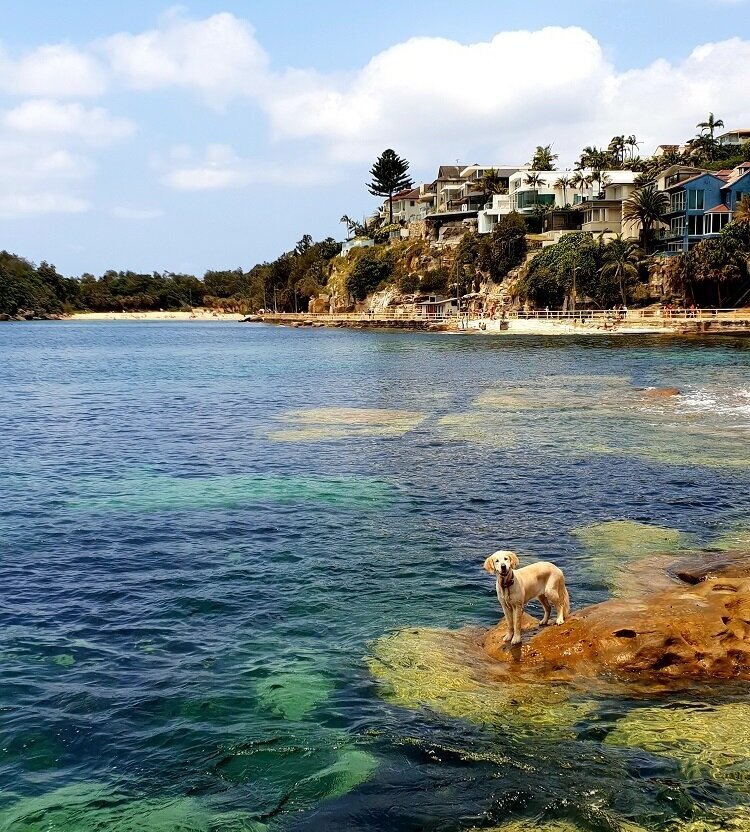 Shelly Beach in Sydney is nice. But not as nice as dogs. Dogs are objectively the best ‘thing’, in any category, in the world. The way that this Golden Lab looked at me convinced me that he wanted to be my friend. I chose to ignore the fact that he probably just wanted food, which is likely the only reason dogs are ever nice to humans.

Tasmania: A remote and rugged island. Perhaps my favourite spot in Australia. This article explains why. 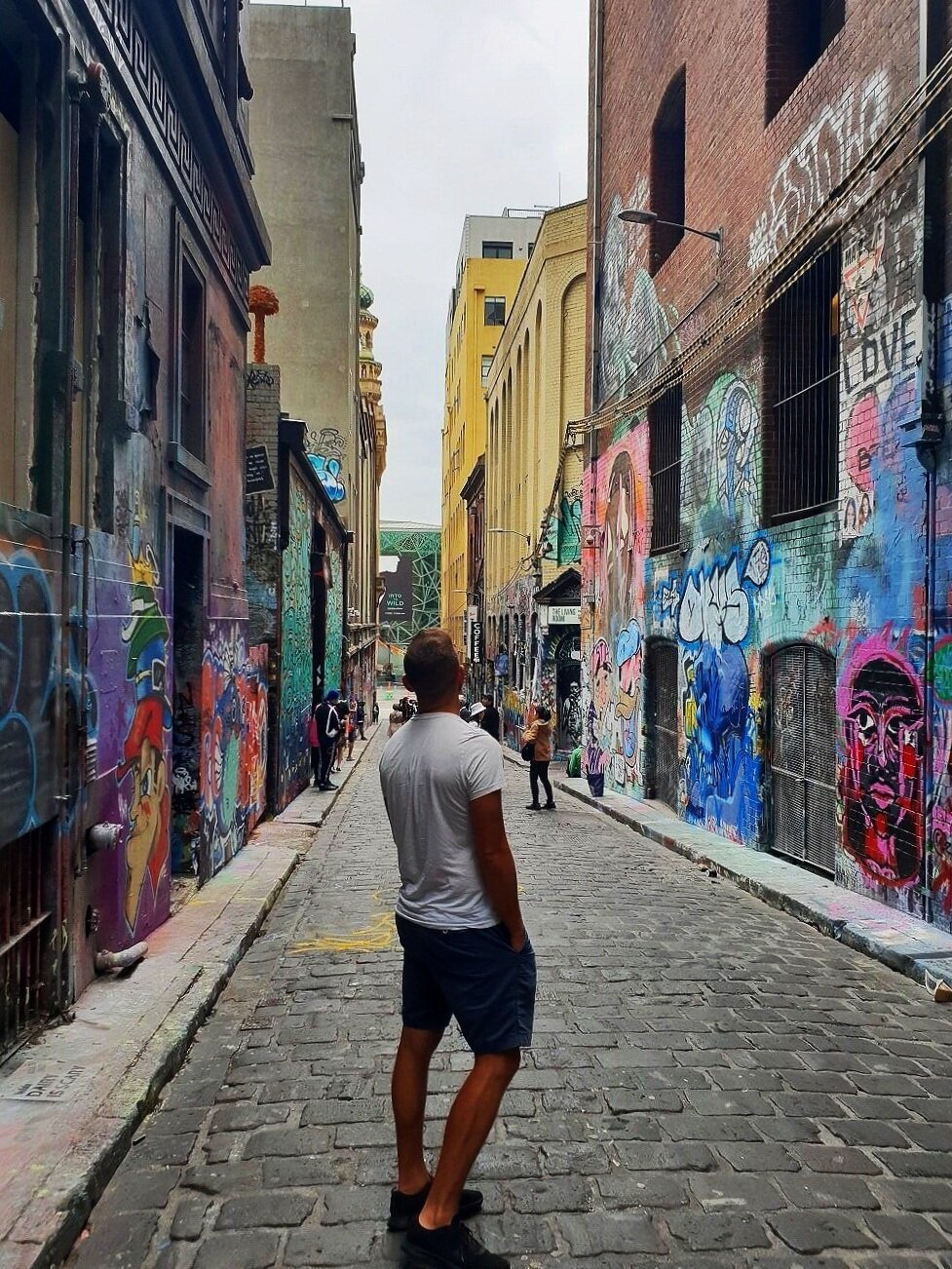 Melbourne: The city is known for coffee, hipsters and being trendy. Locals delight in telling you how much cooler Melbourne is than Sydney, not that there is a competition or anything. Probably one of the nicest cities on earth to live in, and one of my favourites globally. 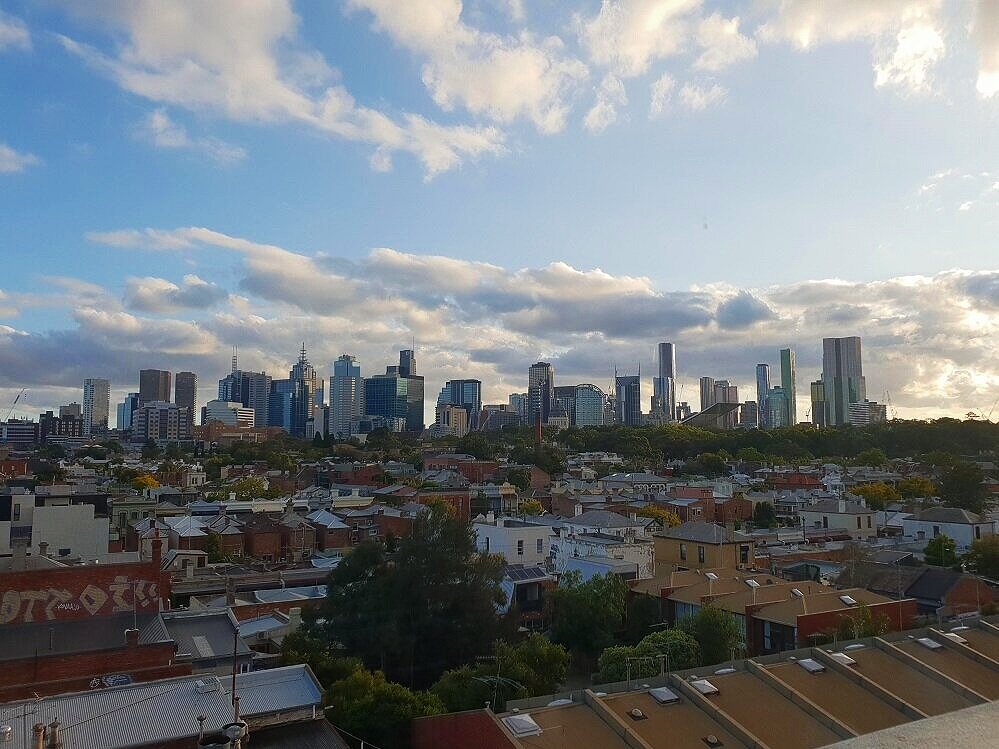 Sydney: Less trendy than Melbourne, but much prettier and built on one of the most picturesque bays on earth. Something that people in Sydney are at pains to remind you that Melbourne lacks. Beaches like Manly and Bondi are stunning. Being able to take a dip in the turquoise ocean before or after you go to work is amazing. Especially if, like me, you work remotely and never actually have to leave to head to an office. 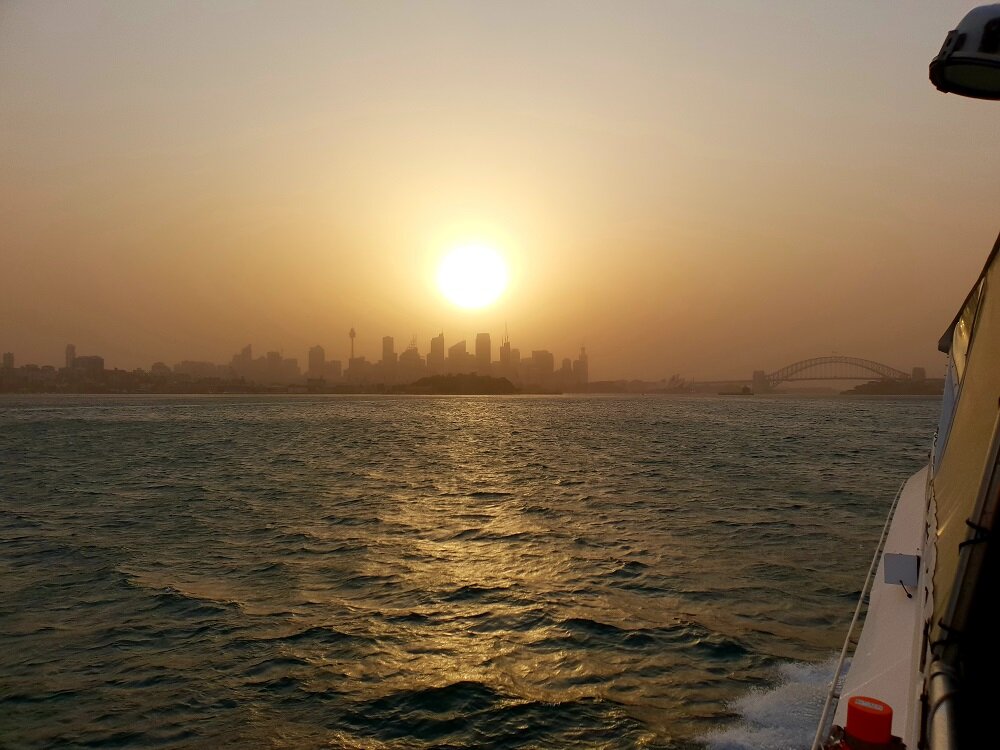 Sydney Harbour. Raging forest fires nearby often shrouded the city in smoke during my visit. While it looked cool, the air quality was so poor that at times being in the city was equivalent to smoking a pack-and-a-half of cigarettes per day.

Blue Mountains: The Blue Mountains were strikingly grey when I visited, due to the smoke from forest fires. Despite this, the scale of the stunning canyons and endless cliffs stretching into the horizon are mind-blowing. They’re only a short drive from Sydney. 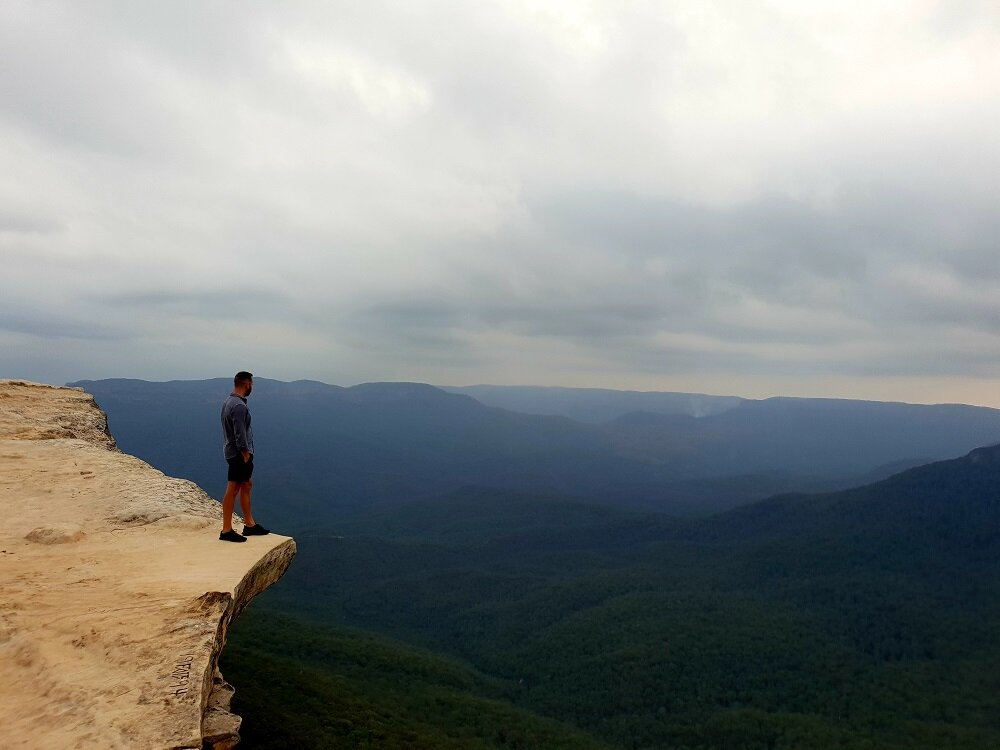 Blue Mountains. I was in a ‘pensive looking away from the camera on a cliff edge’ kind of mood, so this picture came naturally. Aside from seeing some forest fires in the distance, the profundity of my thoughts extended to whether I needed to buy new shoes and trying to block out election updates from the UK.

Hunter Valley: This wine region is charming. The novelty of vineyards dotted with kangaroos takes some time to wear off, at least for tourists. There are around 45 million of them in the country, double Australia’s population. As a result, Australia is probably one of few countries in the world to cull their own national symbol. 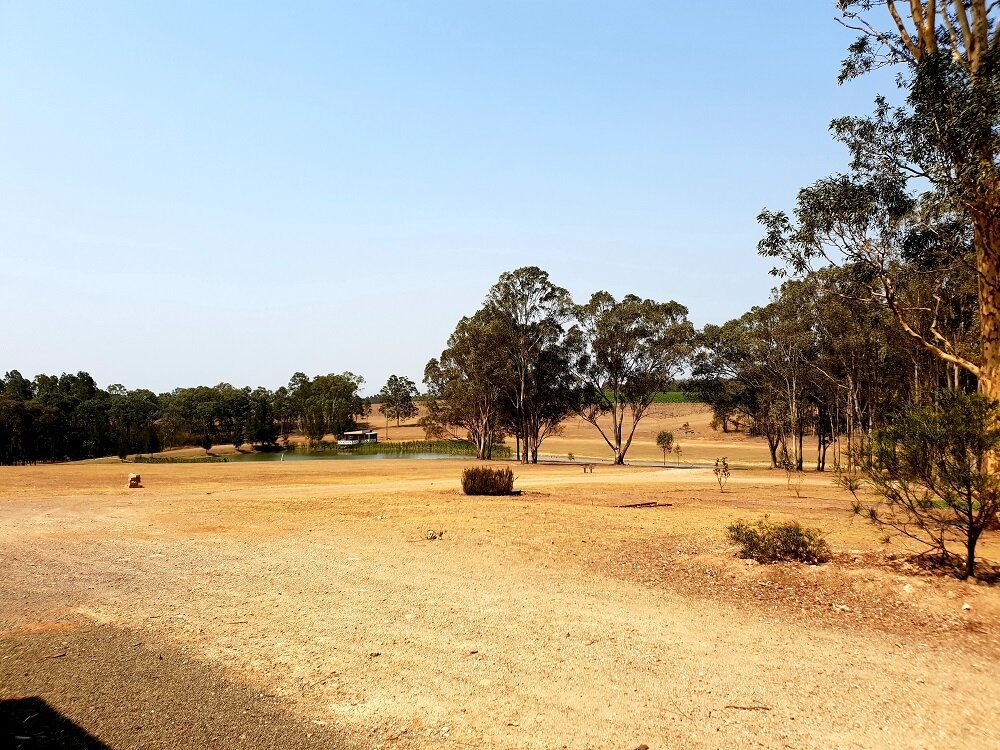 Hunter Valley. Kangaroos are hiding in the forest and vineyards.

Byron Bay: Like anywhere described regularly as ‘bohemian’, Byron Bay is full of lots of people wearing yoga pants, Sunday markets selling industrial quantities of tat, and people who would describe themselves as ‘spiritual’. I wanted to hate it but quite predictably found myself loving it. The beaches here are among the most beautiful on the East Coast.

Brisbane: If Melbourne is trendy and Sydney has the natural beauty, Brisbane is conspicuous for having neither. I’m being crass. It’s an interesting large city but doesn’t offer tourists as much as the country’s ‘big two’ cities. 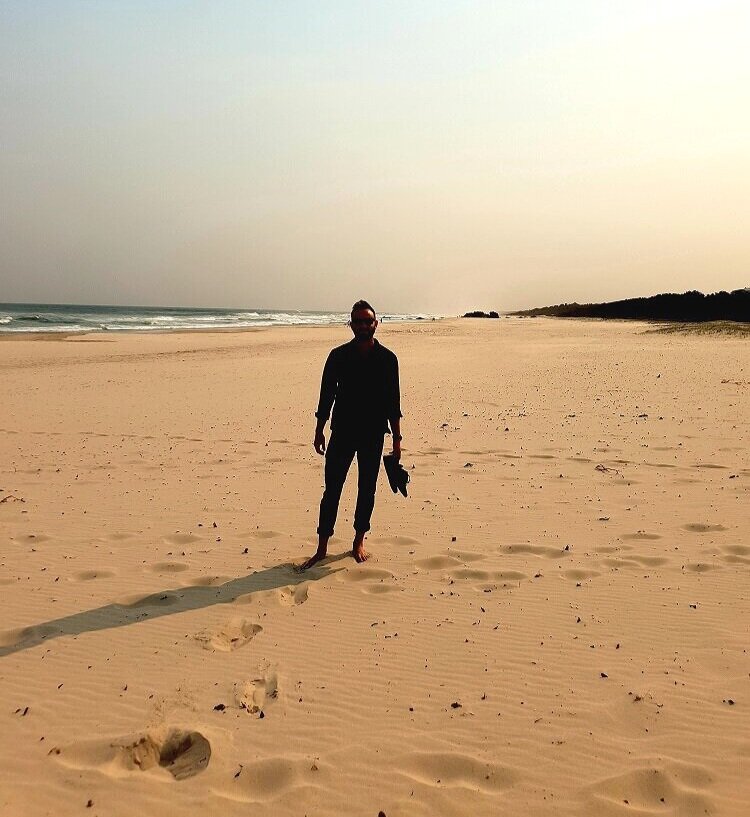 In the highly unlikely event that I release a solo album at some stage in my life, this would be the album cover. Just slightly annoyed with myself that I didn’t wear all white.

Fraser Island: The world’s largest sand island, stretching over 120km. Stunning and one of just two places on Earth where you can take a flight that lands and takes off from a beach.

Townsville: I take my hat off to whoever named this city. Beautifully literal.

Cairns: Gateway to the Great Barrier Reef. When I visited in 2016, the coral was not in great shape. Unless you go to reefs much further away from the shore, most of the coral is bleached. Probably best to go now while it still exists in some form. 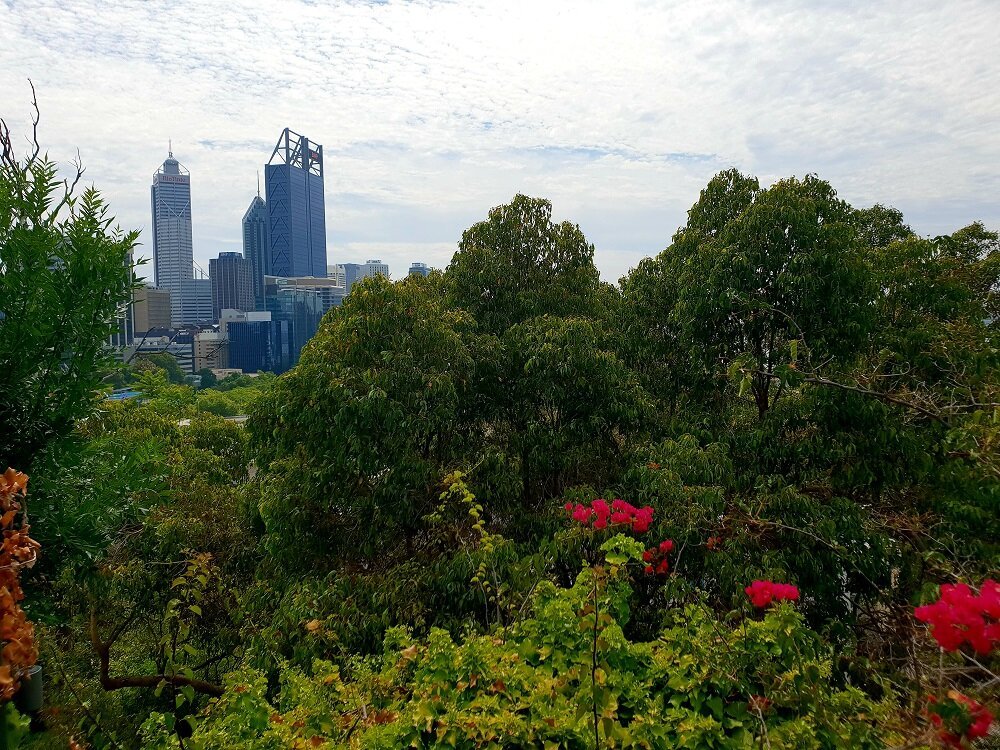 Perth: Not on the East Coast. In fact, it’s a five-hour flight from Sydney. Perth is the most remote city on earth. Just 1.5 million people live in the state of Western Australia, the same as in tiny Wales, despite the state being larger than Western Europe. Perth has beautiful beaches and stunning botanical gardens. 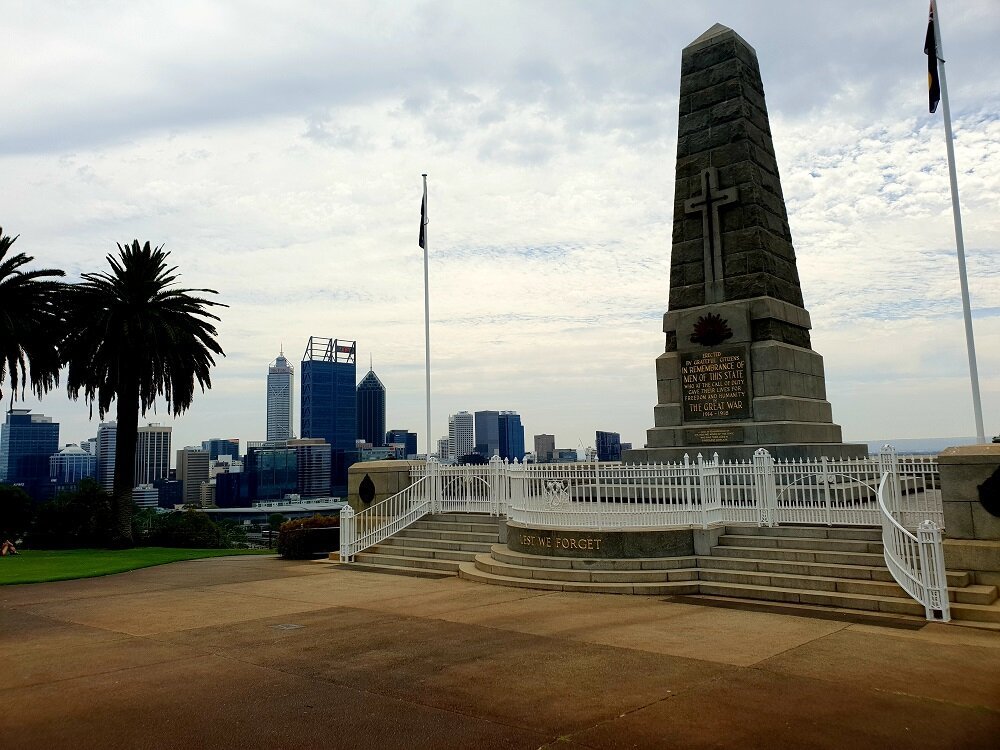 A Little Too Perfect?

There are few countries which offer a quality of life so high, or such a varied outdoor lifestyle as Australia does. Australians know it. Like in the USA, this notion does unfortunately contribute to a laissez-faire attitude towards what’s happening in the rest of the world. 50,000 people could die in a natural tragedy in Asia, and Australian newscasters would most likely show a newsreel about a cat being stuck in a tree. You won’t find any international news until about page 50 of a newspaper, if there is any at all. 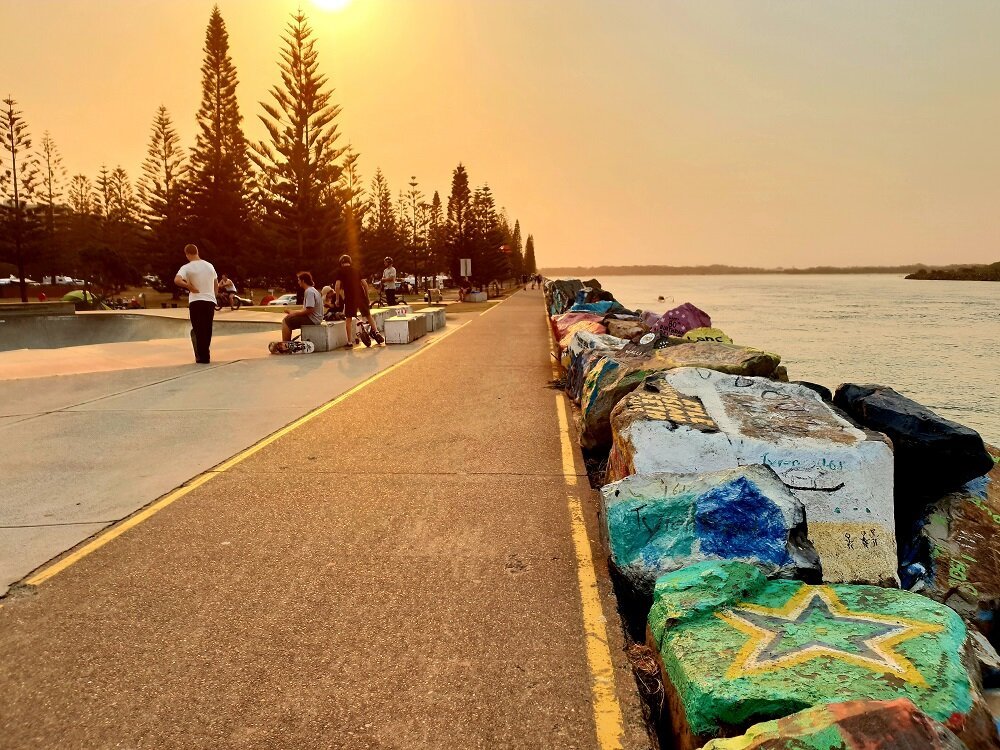 Port Macquarie rock wall, on the East Coast. The rocks were all painted by local residents. While they look good from close up, from far away the colourful rocks unfortunately resemble piled up garbage bags.

Maybe I’m jealous, but for me Australia might be a little too clean cut. I’m the sort of person who prefers a bit of grit in daily life. Or at least pretends to, so I can try to fit in with hipsters and hide the fact that I went to a boarding school. Rules surrounding public life, driving and drinking, are the strictest in the world. Don’t even think about having a beer on a beach. And cities are so well run and clean that they may lack an edge. Maybe I miss feeling like I might get mugged on the way back from a night out in London, which gets the adrenaline flowing at least.

Next Post: Mauritius – One Of The World’s Best Paradise Islands